The Most Common Health Problems in 14 Popular Dog Breeds

Your dog's unique DNA affects his health in the same way your genes impact yours. Here are the conditions to look for in your dog—and what you can do about them. 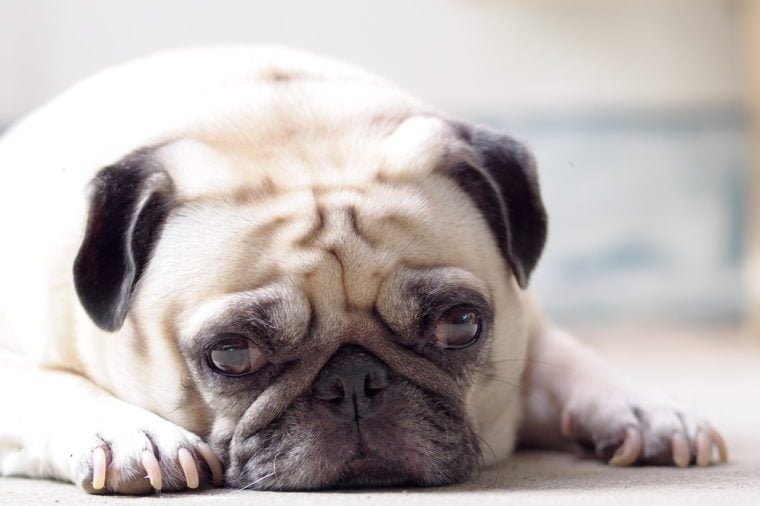 Heredity can affect any dog's health

If you've taken a genetic test yourself, you know that biology is not destiny. But knowing what's lurking in your genes can help you decide what to do about what may (or may not) be coming. This is also true for dogs. A new DNA test, specifically designed for the furry loves of our lives, can predict your dog's chances for acquiring specific genetic traits and diseases. The test, pioneered by Wisdom Health and Genoscoper Laboratories, uses genetic testing technology, which can be done at home. A study based on the test yielded surprising results for mutt lovers. All dogs, including mixed breeds, can be affected by genetic disease variants. The good news? Being forewarned is forearmed. There's a lot you can do to counteract what's in your dog's genes, just like you can for your own. 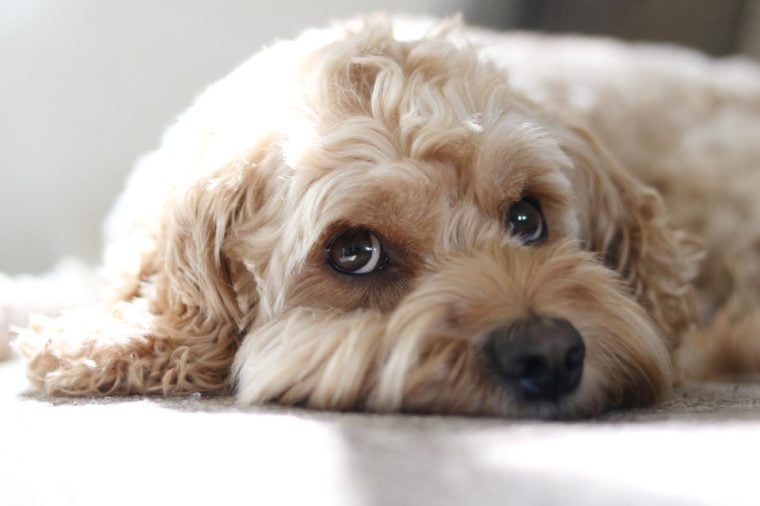 "Mixed breeds are less likely to develop a genetic diagnosis than pure breeds, but it still happens, more often than people realize," explains Angela Hughes, DVM, veterinary genetics research manager for Mars Veterinary, which operates Wisdom Health. The Wisdom Panel analyzes all of the breeds in the dog's heredity and the health concerns inherent in each breed. They then note when two or more ancestral breeds' health issues overlap. "That helps your dog's veterinarian hone in on specific conditions as your pet ages, so you can catch some problems quickly, and lessen the risk of developing others," adds Dr. Hughes.

Cockapoos, a mix of a poodle and cocker spaniel, may be at risk for an eye disease that affects older dogs called progressive rod cone degeneration. "Late adult early geriatric blindness is a condition that at this time you can't avoid, but you can help your dog prepare for it by setting up your space, removing potentially hazardous items from around the house, and maintaining a solid routine," says Dr. Hughes. 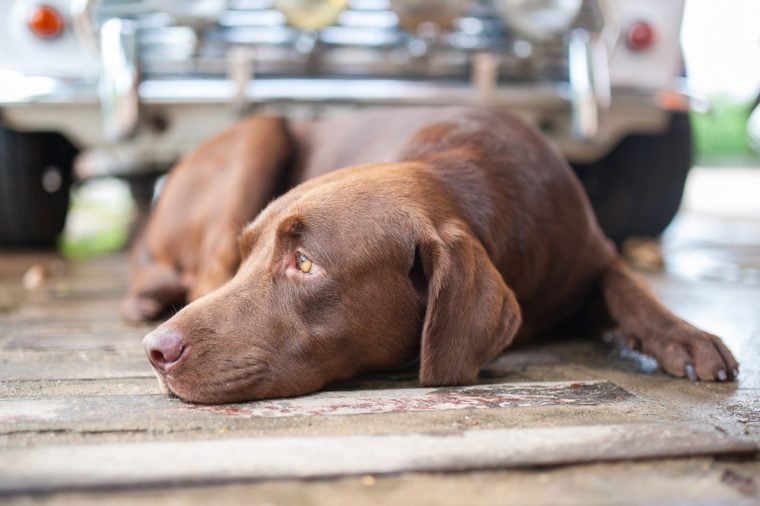 A popular breed known for their boundless energy, Labrador retrievers are predisposed to a number of health conditions. "Labs are prone to hip and elbow dysplasia, eye conditions, and exercise induced collapse (EIC)," says Pete Lands, DVM, the director of emergency and critical care at Saint Francis Veterinary Center. He adds that there are surgical treatments to treat hip and elbow dysplasia, and ophthalmological evaluations can diagnose ocular disease.

As for EIC, it's a recessive hereditary trait which has become common in labs, no matter what their coat color. It is an important condition to be aware of, since it can be fatal. If you know that your dog has the trait for EIC, avoiding strenuous exercise is imperative, especially in hot weather. Dogs with EIC often, though not always, become wobbly and collapse after five or ten minutes of vigorous exercise, such as running, playing catch, or fetching. Older dogs with flaccid muscles may be more susceptible. Watch out for these 15 signs your dog is secretly mad at you. 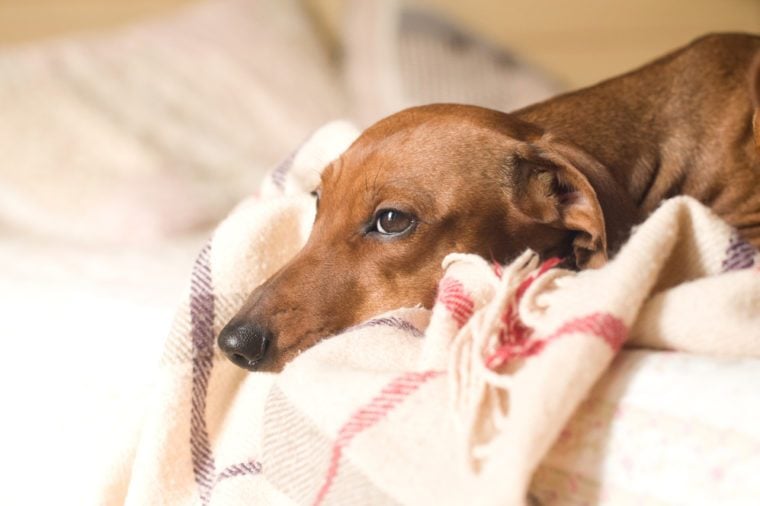 A scent hound dog breed which is fiercely loyal and protective, dachshunds are short-legged, and long-bodied. "With bold and lively personalities, and weighing in at around 20 pounds, some might say they suffer from a Napoleonic complex!" says Dr. Lands. Their small stature predisposes them to back problems, specifically disc herniations, which can occur at a young age. This condition can sometimes lead to paralysis of the hind limbs, front limbs, or both. If this occurs, an experienced surgeon is usually able to remove a disc impinging on a nerve. "Even the best surgeons can't repair every injury, but new techniques are being developed to remove a portion of each disc, which can prevent disc herniation in dachshunds," he adds. If you have a dachshund, talk to your vet about proactive surgical procedures that may help. 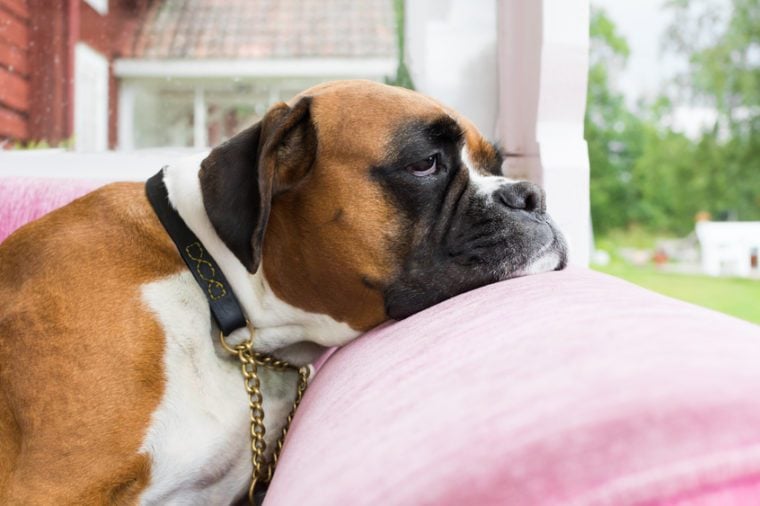 This loyal and adorable breed is prone to a wide range of health conditions, so getting yours from a reputable breeder is essential. Topping the list is a condition called gastric-dilation-volvulus (GDV), also known as torsion or bloat. GDV can be life-threatening to large dogs who are barrel-chested. It typically occurs when the stomach becomes distended and twists. The dog is not able to rid itself of the excess air in its abdominal region, reducing blood pressure and leading to shock. According to Dogtime, this condition may be avoided by giving your boxer several small meals daily (rather than one large one), encouraging your pup to drink water immediately after eating, and eliminating vigorous exercise. You can also have your boxer tested for this genetic condition. Here's your official guide for picking the best dog breed for you. 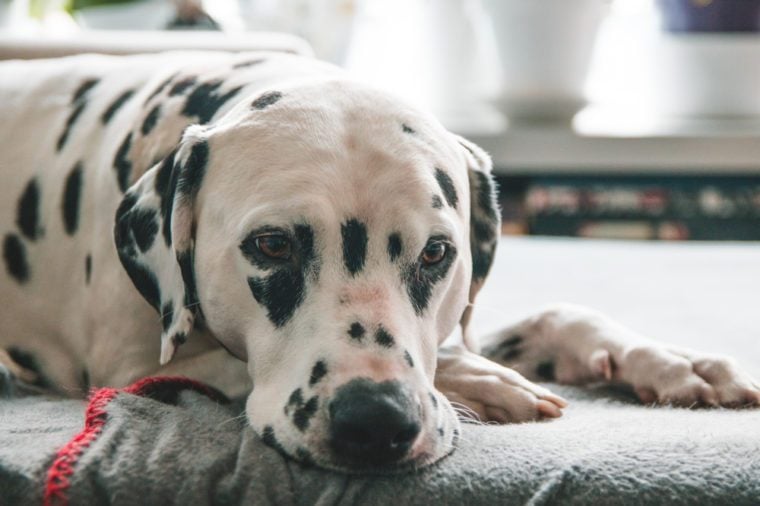 Deafness has been linked to the gene that gives Dalmatians their white and black spotted coats. Since deafness in Dalmatians does not appear until several weeks after birth, some people may be surprised to find that they have adopted a dog with some, or complete, hearing loss. Sadly, many deaf Dalmatian puppies are put up for rescue or unnecessarily euthanized. A very bright breed, Dalmatians can learn American Sign Language and live wonderful lives with owners who understand them. Dalmatians are also prone to urinary stones, which can be prevented through diet. 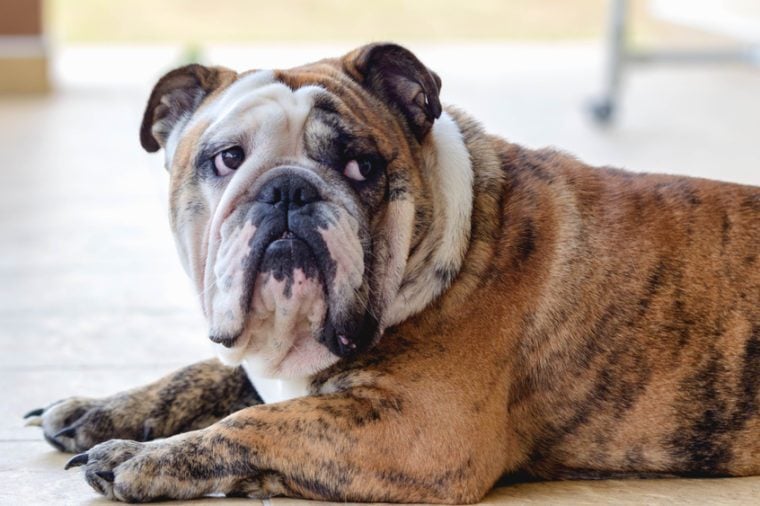 Bulldogs, French bulldogs, and other brachycephalic (smoosh-faced) dog breeds are predisposed to overheating, especially in warm climates. "This group of dogs has a short soft palate and a small nose, making it difficult for them to pant efficiently to release heat from their bodies," explains Dr. Lands. "While these dogs are generally well-mannered and adorable, bulldogs do better in climates that are not too hot." There are surgical options available, which can open up the airway and nostrils, thus improving a brachycephalic dog's ability to breath, he says. Don't miss these 28 summer health tips all dog owners should follow. 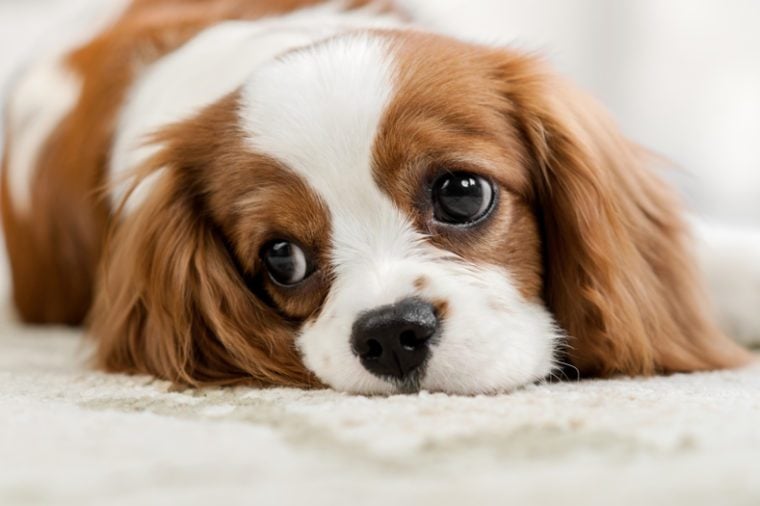 Known for their toy size, sweet faces, and affectionate natures, Cavalier King Charles Spaniels are lap dogs that originated from England during the 18th Century. "While they are crowd pleasers, these adorable dogs are predisposed to a multitude of serious medical conditions, including heart disease. A genetic mutation in Cavaliers can lead to mitral valve heart disease and heart failure at a young age," says Dr. Lands. Regular veterinary appointments that include listening to your dog's heart with a stethoscope will provide early detection and diagnosis of heart disease in your pup. "If there is suspicion of heart disease, following up with a veterinary cardiologist to perform an echocardiogram is a must," Dr. Lands recommends. Like many herding dogs, this beautiful breed is prone to MDR1, a gene mutation that causes multi-drug resistance. "Knowing your dog has it can help you to avoid specific medications or to adjust their doses," says Dr. Hughes. The Veterinary Clinical Pharmacology Laboratory at Washington State University lists the drugs that can adversely affect dogs with this mutation. According to Dr. Hughes, around one in 50 mixed breed dogs are also affected by the MDR1 gene mutation. 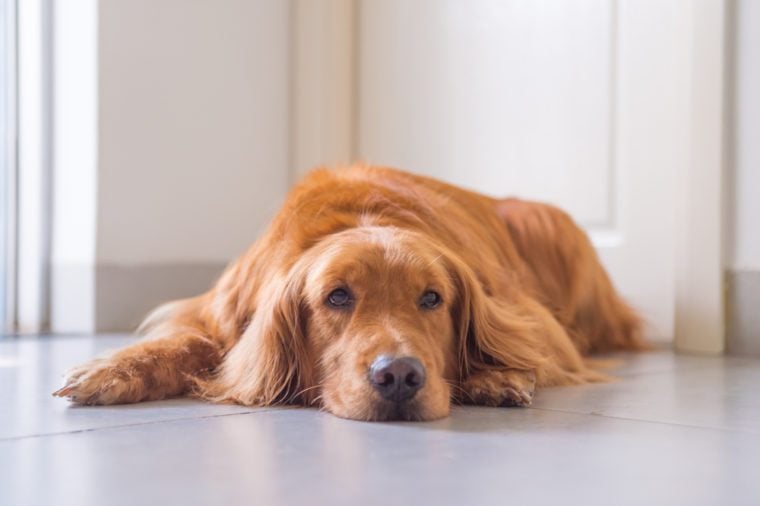 Golden Retrievers are one of several dog breeds genetically prone to type 1 diabetes, which, in most cases, requires daily insulin injections. The trick here is to know your dog's genetic makeup and to catch the disease early, with annual or bi-annual blood tests. (Keep in mind that type 1 diabetes can surface in young Goldens.) Talk to your vet about how you can help your dog live a full and happy life with diabetes; just as in people, this is a manageable condition. Here are 10 silent signs that your healthy dog is actually sick.