Honestly, we shouldn't even call them "Chinese." 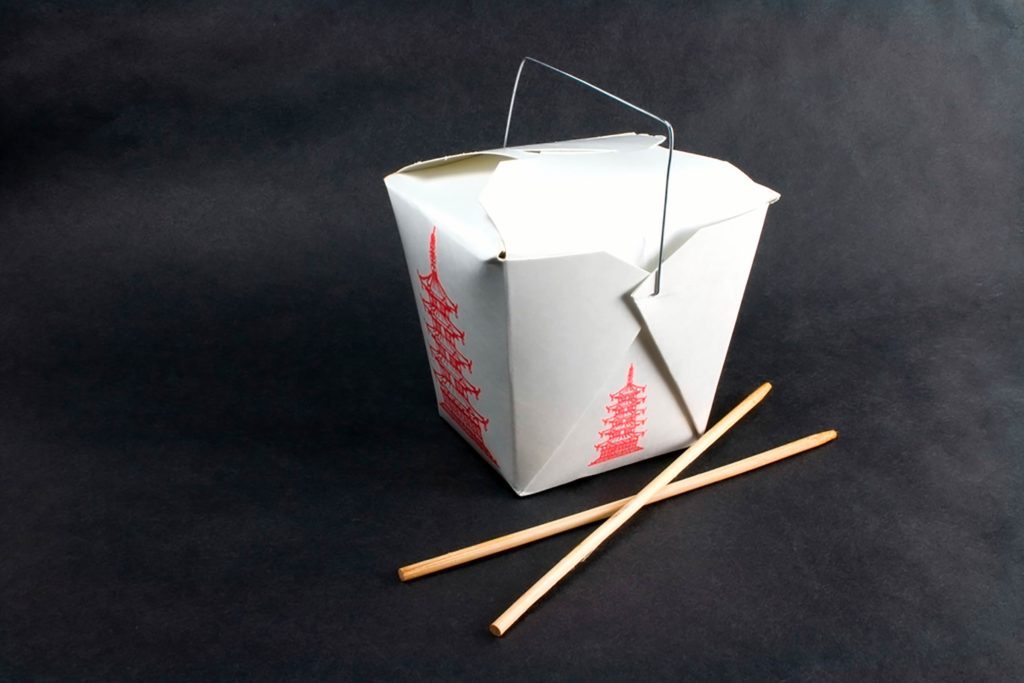 Victoria Short/Shutterstock
Ordering Chinese takeout is about more than just eating General Tso’s chicken with a side of fried rice in the comfort of your pajamas. Whether you’re conscious of it or not, you do it for the experience: the fortune cookie, the umpteenth attempt to pick up any amount of rice with chopsticks before resigning to a spoon, and of course, the iconic paper boxes with the red building—it’s called a pagoda, FYI—on the side that are so fun to open.

But those are no ordinary paper boxes. No, the secrets they hold within their folds can forever change society’s perception of what it means to “order Chinese takeout.” First, because you’ve been using the container wrong this whole time. Second, because Chinese takeout is a lie.

You may already be aware that the food served at Chinese restaurants in the U.S. is vastly different from what is actually served in China. In fact, many American Chinese restaurants serve dishes made with produce that isn’t even native to China. And it turns out that Chinese takeout boxes are just as Americanized as the food inside them.

The folded takeout boxes were inspired by traditional Japanese origami, but their creator was Frederick Weeks Wilcox, an inventor in Chicago. In 1894, Wilcox patented the “paper pail,” a single sheet of paper that could be folded into a box in such a way that would minimize leaks. A thin wire on top served as the handle.

As more Chinese immigrants came to America, especially during the California Gold Rush, Chinese culture spread throughout the country. Chinese restaurants were born, along with the option of takeout using Wilcox’s boxes. One producer of these choice containers was a company now known as Fold-Pak. In the 1970s, a Fold-Pak employee, a graphic designer whose name is unknown, decided to add a pagoda to the side of the box and added “Thank you” on top, stylized to mimic Chinese calligraphy. Both were printed in red, a sign of good fortune in Chinese culture.

The rest is history. That stylized box became synonymous with Chinese takeout and still is to this day—in America that is. As Fold-Pak’s marketing manager told The New York Times, “We don’t sell them in China.”

With this mind-boggling knowledge, you may never view your takeout in the same way. You might just order it more often because you know the history. So if you’re craving the takeout but not the calories, here are the nutritionist-approved Chinese food dishes you can order guilt-free.

This Is Exactly How Long Baking Staples Last