This Is the Difference Between a Princess and a Duchess

Is it possible to be both?

If Disney movies taught us anything, it’s that when you marry a prince, you become a princess. So it may seem strange that when Kate Middleton and Meghan Markle married into the royal family, we were all expected to call them duchesses. Obviously, Princess Kate and Princess Meghan sound much better. That got us thinking, how do you become a princess, anyway? And what makes them different from duchesses? Beginners should check out this chart that breaks down the royal family tree.

It turns out, there are two ways to become a British princess: to be born the daughter of a prince, or to marry one. On top of that, only those born into the royal family can use the title princess (or prince, for that matter) before their name. And those things don’t guarantee it either; for instance, despite being the child of a prince, Harry and Meghan’s baby won’t get a royal title at all.

This is also the reason why Prince Andrew’s daughters Beatrice and Eugenie are princesses, but the daughter of Princess Anne, Zara Phillips, is not. A child’s parents can also decide against bestowing the title upon their children, which is why Prince Edward’s daughter, Louise Windsor, is a lady instead of a princess. The BBC writes that Prince Edward and his wife decided against the title.

After the royal titles of king, queen, prince, and princess come the five noble ranks: duke and duchess (the members of nobility that rank right below the monarch), marquess and marchioness, earl and countess, viscount and viscountess, and baron and baroness. These nobles are referred to as lords and ladies (the exception being dukes and duchesses, who are referred to as “Your Grace”), according to Merriam-Webster. Princes and princesses often hold dukedoms.

Of course, the Queen has free rein over all of this. “The monarch may offer to bestow a royal title upon his or her daughter’s children,” says Lucy Hume, associate director of Debrett’s, to Town and Country. “For Peter and Zara Phillips, the Queen offered to give them a royal title when they were born, but Princess Anne and Captain Phillips opted to decline this offer.” The moral of the story is that royal titles are a complicated business—but if you want to learn more, find out exactly how the most famous royals each got their titles.

The Mall in London was intended as an emergency airstrip

The royal family takes its security seriously, but that doesn't mean every landscaping feature has an ulterior use. According to this theory, the 0.58-mile road leading to Buckingham Palace was intended as an airstrip. That way, the royal family could be evacuated via plane in case of emergency. It's an interesting idea, but unfortunately, the Mall would make a lousy runway. The road is about a mile too short for any modern aircraft, and is lined by lampposts and buildings that would make takeoff impossible. However, helicopters can, and do, land on the Palace's lawn. 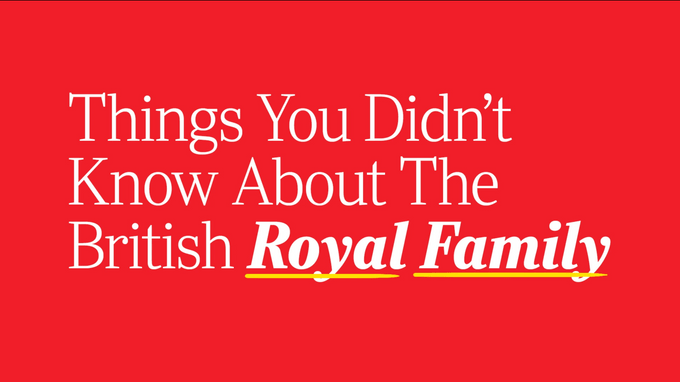 Queen Elizabeth I—also referred to as the Virgin Queen, due to the fact that she never married—is remembered as one of the greatest leaders of England. And because of her strong leadership qualities, some misogynists of the time decided the Virgin Queen must have been a man in disguise. The myth was first printed by Bram Stoker, the author of Dracula, in his 1910 book Famous Imposters. Stoker believed that at some point in Elizabeth's childhood, she was sent to the countryside to escape the plague. Unfortunately, the young princess fell ill and died. When the feared King Henry VIII came to visit her, Elizabeth's caretakers decided to replace her with a similarly aged child, rather than anger the king. Because there were no girls to choose from, the governess found a young boy and dressed him in Elizabeth's clothes. The king was never the wiser, and according to Stoker's belief, the young farm boy went on to rule the country. And before you assume Stoker was just trying to stir the pot, History Answers notes that the novelist was totally certain he had the story right. This isn't even the craziest conspiracy theory about the royals—here are 17 others to take a look at.
REX/Shutterstock

The Duchess of Cambridge shut this one down herself. At one afternoon tea event at a charity cafe, volunteers served Kate almond milk after hearing a rumor that's what she liked. “Don’t believe everything you read," said the duchess. "I don’t even like almond milk.” These are the 9 bizarre eating habits of the royal family, according to their personal chef.
WILL OLIVER/EPA-EFE/Shutterstock

The queen has no actual power

Obviously, the United Kingdom operates as a parliamentary democracy—but that doesn't mean the sovereign is a powerless figurehead. In times of crisis, it wouldn't be out of bounds for the queen to declare war. Similarly, the queen creates orders of knighthood and appoints the prime minister after a general election or resignation. Here are some more things the Queen has the power to do.
Historia/Shutterstock

In order to show citizens that the royal family was taking on the same dangers and rations as the rest of the country, King George VI and his wife, Queen Elizabeth, officially spent World War II at Buckingham Palace in London, despite near-constant German bombings. In fact, the family spent the majority of their nights and weekends at Windsor Castle in Berkshire. Talk about a rough commute: the residences are about an hour and a half drive apart. The couple's daughters, Princess Elizabeth and Princess Margaret, lived full-time at Windsor Castle during the war. These are the 17 secrets you never knew about Windsor Castle.
REX/Shutterstock

According to this rampant rumor, which was first published by Jeremy Paxman in his book On Royalty in 2006, Prince Charles has seven boiled eggs cooked for him each morning, but only eats one. That way, he can choose the precise level of cooked-ness he'd like that day. The Palace chose to set the record straight. In 2012, the Prince of Wales published an FAQ on his website. "Does The Prince of Wales have seven boiled eggs cooked for his breakfast but only eat one, as claimed in Jeremy Paxman’s book 'On Royalty'?" one question asks. The answer: "No, he doesn't and never has done, at breakfast or any other time." But, these are the completely true things you never knew about Prince Charles.
REX/Shutterstock

The queen has four drinks a day

In the summer of 2017, Queen Elizabeth's former personal chef Darren McGrady was misquoted as saying the queen drinks four cocktails each day. That means she'd be a binge drinker by government standards. When several other tabloids picked up the story, McGrady reached out to make a correction. It turns out, he had been listing the queen's favorite drinks, not the ones she has each day. “I’m pretty confident she doesn’t have four drinks a day,” McGrady told Reader's Digest. “She’d be pickled.” These are the 9 foods Queen Elizabeth would never, ever eat.
sloukam/Shutterstock

There is an infestation of rare spiders under Windsor Castle

In 2001, British tabloids went wild over reports that engineers at Windsor Castle found swarms of spiders in the utility tunnels underneath the residence. According to some not-so-reliable sources, the spiders were thought to be either a new species or a species that had thought to have been extinct for thousands of years. The spiders were supposedly nine centimeters, venomous, and had jaws strong enough to penetrate human skin. Scary stuff! Fortunately for everyone who visits the castle, the rumor was quickly dispelled. The spiders were a totally ordinary species, harmless, and only about four centimeters.
REX/Shutterstock

If the Union flag is flying, the queen must be home

We understand the confusion on this one; flags are a confusing way to communicate. But it's not the Union Jack that you're looking for to signify the queen's presence, it's the Royal Standard. If the Union flag (the national flag of the United Kingdom) is flying, the queen is away. Instead, look for the Royal Standard. You can identify it by its red, gold, and blue colors. Check out more facts about Queen Elizabeth we bet you're curious about.
Tim Rooke/Shutterstock

Prince Charles will never be king

Because Prince William (and his adorable family) are so popular, there's a widespread belief that Queen Elizabeth could skip Prince Charles in the line of succession and name Prince William and Kate Middleton the next king and queen. According to People, this will never happen. The queen doesn't have the power to choose her successor and Prince Charles is unlikely to abdicate—and if there's one thing the royal family hates doing, it's breaking with tradition. Now that you know which facts are actually false, make sure you know these 50 real things you didn't know about the royal family.

80 Moving On Quotes That Will Help You Let Go
Where Does the Phrase “No Worries” Come From?
Word Power Knowledge Quiz: Words That Shine