The Entire Royal Family Tree, Explained in One Easy Chart

You'll finally be able to tell who's who in the House of Windsor.

No family tree is cooler than that of the British royal family. Who wouldn’t want to be related to the ever-stylish Queen Elizabeth II? What’s interesting about the royals, in particular, is that many of them have titles determined by how they’re related to Her Majesty. Here, we break down who’s who in the Windsor family. 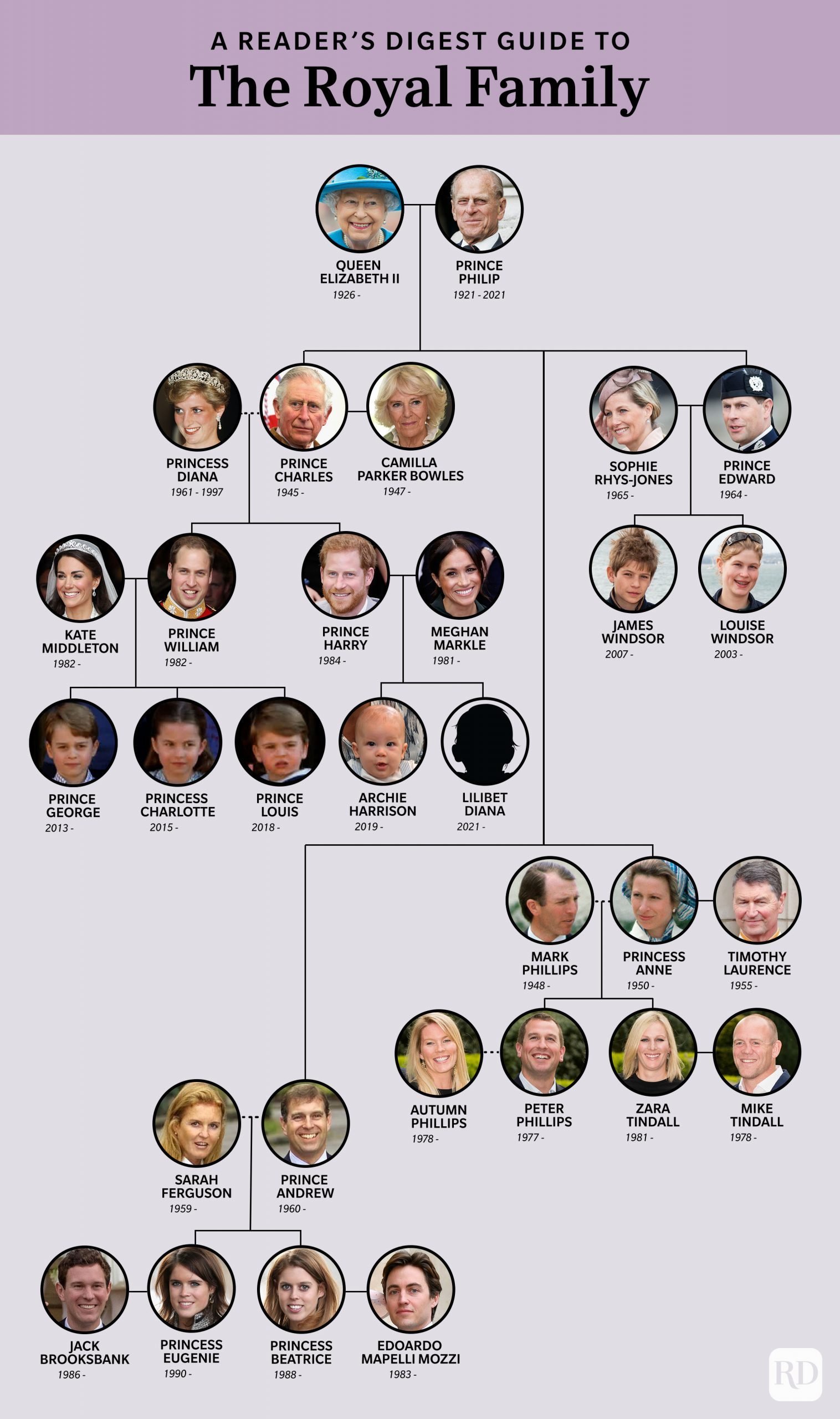 First comes Her Majesty the Queen, the star atop the royal family tree holding the highest level of the hierarchy. As the heir of the British Crown and constitutional monarch of Commonwealth realms, she has the utmost authority. Born in 1926, she is the longest-reigning monarch in the United Kingdom—she’s been queen since 1952 and celebrated her 95th birthday in April 2021.

Queen Elizabeth’s husband, the Duke of Edinburgh, passed away on April 9, 2021. Born on June 10, 1921, he lived to be nearly 100, and he and Queen Elizabeth were married for more than 73 years! Here’s why he wasn’t considered “king” of England.

Queen Elizabeth and Prince Philip’s eldest son is the 72-year-old Prince of Wales, Prince Charles. Being first in line for the throne, he will become king when his mother passes—making him the oldest person to take the throne. Unfortunately for him, he’s the least popular member of the royal family, likely in part due to his relationship with the next person on the family tree.

Prince Charles’ first wife, the daughter of a British Earl, has become something of a mythologized figure at this point. Diana was born in 1961. The pair married in 1981, but their marriage was tumultuous and she was notoriously unhappy. They divorced in 1996, but she remained in the public eye. Her life ended with the tragic 1997 car crash that also killed her partner, Dodi Fayed, and the driver of the car, Henri Paul. These are the royal rules Princess Diana changed for good.

Camilla, Duchess of Cornwall, is the second and current wife of Prince Charles. Born in 1947 as Camilla Rosemary Shand, she was also a divorcée when she and Charles married; she divorced Andrew Parker Bowles in 1995. She became Duchess of Cornwall—deciding not to be styled as Princess of Wales, due to Diana’s association with the title—upon marrying Prince Charles in 2005. Here’s why he didn’t just marry Camilla right away.

The eldest son of Prince Charles and Princess Diana, William, the Duke of Cambridge, is second in line for the throne at 38 years old. He is married to Kate Middleton, now the Duchess of Cambridge, whom he met at university. They just had their tenth wedding anniversary in April 2021.

William and Kate have three children: seven-year-old George, six-year-old Charlotte, and three-year-old Louis. They are third, fourth, and fifth in line for the throne, respectively; historically, Charlotte would have gone after both of her brothers, but a 2013 law allows age, not gender, to determine the order of succession.

Prince William’s younger brother was born in 1984. The 36-year-old prince, whose real name is Henry, married American actress Meghan Markle, now Duchess of Sussex, in 2018. Their history-making, fairytale wedding captured the world’s attention on May 19, 2018, but it wasn’t happily ever after for the pair, who stepped back from royal duties in early 2020. Their relationship with the rest of the family is somewhat contentious, especially after February 2021, when the pair did an interview with Oprah detailing Meghan’s bombardment by the British press and experiences with entrenched racism in the monarchy. Prince Harry maintains his place in the line of succession, though—until little Prince George and his siblings grow up and have children, Harry will be sixth in line for the throne.

The “royal” baby no more, though still seventh in line for the throne, Archie was born on May 6, 2019 and just turned two. Though his title is Master Archie Mountbatten-Windsor, and there’s a reason he’s not a prince. As of summer 2021, Archie became a big brother to Lilibet Diana, named after her great-grandmother the Queen and grandmother Diana.

Princess Anne is the second child and only daughter of Queen Elizabeth and Prince Philip. Born in 1950, her official title is “Princess Royal.” In 1973, she married Captain Mark Phillips, a “commoner” (though being a gold medal-winning equestrian is far from common!). After their 1992 divorce, she remarried the same year; Vice Admiral Sir Timothy Laurence is her current husband. Sir Timothy does not have a royal title as the spouse of a daughter, but he is actually the Queen’s personal aide-de-camp. Learn more about the confusing business of royal titles explained.

Princess Anne had two children with Captain Phillips. Now grown, Peter Phillips (born in 1977) and Zara Tindall (née Phillips, born in 1981) do not have royal titles. They didn’t receive them automatically due to their father’s commoner status. Queen Elizabeth still offered her daughter royal titles for her children, but Anne declined. Peter is now the managing director for SEL UK and married to Autumn Phillips (née Kelly)—though the two have announced they are getting a divorce. They have two children, Savannah (10) and Isla (9). The former was Queen Elizabeth’s first great-grandchild! Zara married rugby player Mike Tindall in 2011, and they have three children: Mia (7), Lena (2), and Lucas (born in March 2021).

Prince Andrew is the third child of Queen Elizabeth and Prince Philip. He was born in 1960. He remains eighth in line for the throne in spite of a scandal that broke in 2019 regarding his connection to convicted sex offender Jeffrey Epstein, which resulted in him stepping back from royal duties. His ex-wife is Sarah, Duchess of York, nicknamed “Fergie” because of her maiden name, Ferguson. They were married for ten years before divorcing in 1996. But Sarah has been present at some royal events recently, including Prince Harry and Meghan Markle’s wedding. Get a look at these 20 stunning royal wedding photos from throughout the years.

Prince Andrew and Sarah Ferguson’s two daughters are Beatrice, age 32, and Eugenie, age 31. Both were recently married, Eugenie to brand manager Jack Brooksbank in 2018 and Beatrice to property developer Edoardo Mapelli Mozzi in 2020. Eugenie gave birth to a son, August, in February 2021. Mozzi has a son, Christopher, from a previous relationship, of whom Beatrice is now stepmother. The royal family just recently announced Beatrice is expecting her first child later this year.

The youngest of Queen Elizabeth’s children, Prince Edward, was born in 1964. His title is the Earl of Wessex. He married later than his siblings, wedding Sophie Rhys-Jones, who met the prince while working public relations for Capital Records, in 1999. The Earl and Countess of Wessex have two children: 17-year-old Lady Louise Windsor and 13-year-old James, Viscount Severn. Edward and Sophie forwent royal titles for their children and chose to have them styled as children of an Earl, which is why they are not Princess and Prince.

The royal family tree might be confusing enough, but the royal line of succession is a whole ‘nother matter!