This Is Why You Should Never, Ever Feed Bread to Ducks

But...don't ducks love bread? Yes, they do, and here's why that's a problem. 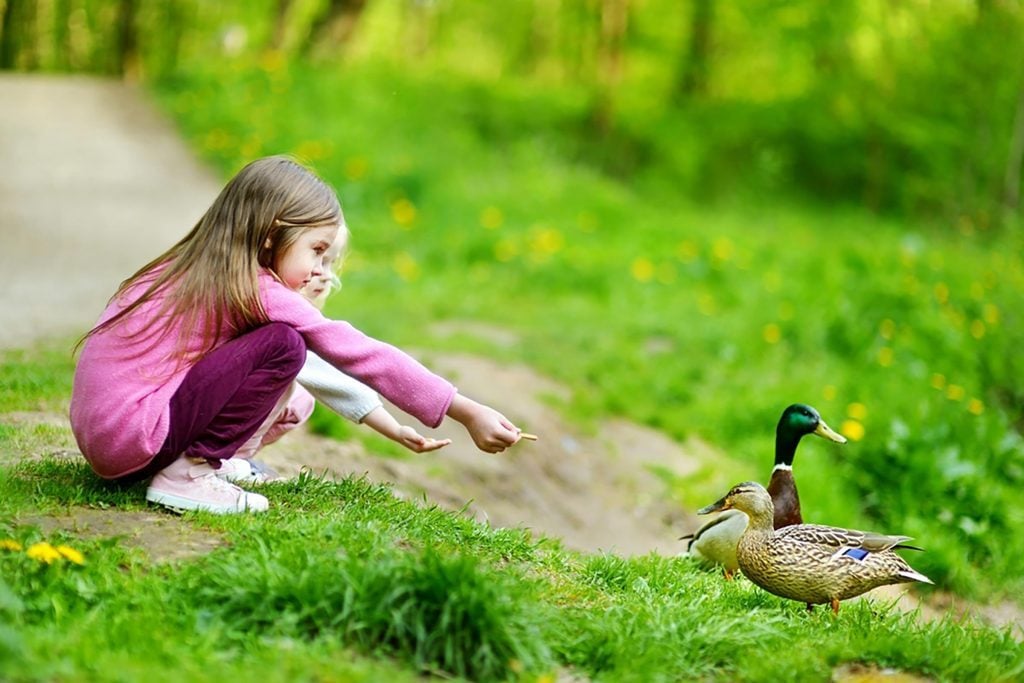 Luckily, bread isn’t toxic for ducks the way chocolate is for dogs. In fact, ducks love it—and that’s the problem. Since bread, especially white bread, is loaded with carbs but devoid of other nutritional value, it’s basically the avian version of “junk food.” Especially if the ducks experience human interaction frequently, they fill up on, and become dependent on, these empty calories. Popular Science describes it as “raising ducks to live on a never-ending candy buffet,” and it can have detrimental effects on the winged waddlers, much in the way living off of junk food would be terrible for a human. (For instance, here’s what happens if you eat nothing but ramen for a week. It’s not pretty.)

Firstly, eating lots of bread can cause the ducks to gain excessive weight. (Learn why pet obesity is a big problem and how you can keep it from striking your pet.) Even scarier, it can prevent them from consuming the nutrients that they need. Such a nutrient-deficient diet can cause “angel wing,” a condition much more awful than its name would suggest. The condition targets ducks’ wings and hinders their ability to fly. Too much bread can affect the next generation of ducks, too; ducklings who eat nothing but bread may never learn how to forage for other, healthier foods, and they could become malnourished. As if that weren’t enough, the bread that the ducks don’t eat can harm them, too. The uneaten, soggy bread grows mold and can spawn bacteria in the water, making ducks sick and even attracting vermin like rats. Gross!

However, this doesn’t mean you should stop feeding ducks altogether. There’s plenty of human food that is much better for them, including rice, oats, veggies like corn and peas, and halved grapes. But also stay away from other human snacks, like popcorn, chips, candy, and, yes, quackers—sorry, crackers.

As for your leftover bread, you still don’t have to throw it away. Popular Science recommends turning it into these tasty bread pudding or stuffing recipes. You’ll be happy and the duckies will be healthy—now that’s a win-win!

Next, learn about another common animal-food combo that’s actually a recipe for disaster: cats and milk!