What Do the Olympic Rings Symbolize?

The famous Olympic rings logo is more than 100 years old, but its symbolism is ageless.

When we think of the Olympics, a few things come to mind immediately: the athletes marching in during the opening ceremonies, proudly carrying their country’s flag; the dramatic awarding of gold, silver, and bronze medals to winners of the events; the torch and other memorable Olympic moments; and, of course, the Olympic rings.

History of the Olympic games

Both the Olympic rings and the modern Olympics themselves can be traced back to one man: 19th-century French historian, sociologist, athlete, and education reformer Pierre de Coubertin. In addition to working to make physical education available to students in France the way it was to their English counterparts, Coubertin organized the world’s first Congress on Physical Education and Scholar Competitions at the 1889 Paris Universal Exposition, according to the International Olympic Committee (IOC). Five years later, in June 1894, Coubertin founded the IOC and proposed what would become the modern-day Olympic Games—the first of which were held in Athens in 1896, followed by the 1900 Games in Paris.

From the very beginning, Coubertin’s vision for the Olympics included elite athletes from different parts of the world coming together in one location to compete against each other. In the second edition of the Olympic Bulletin in 1894, he spelled out how the Games would rotate between different countries, and why that was such an important aspect of the event. “The genius of each people, its manner of holding the festivals and of engaging in physical exercise,” he wrote, “is what will give the modern Olympic Games their true character, and perhaps may make them superior to their ancient predecessors. It is obvious that Games held in Rome will not resemble in the slightest those that may be held in London or Stockholm.”

History of the Olympic rings

The 1912 Olympic Games held in Stockholm, Sweden, were the first to include athletes from what were then considered the five continents: Africa, Asia, Europe, Oceania (Australia and New Zealand), and a combination of North and South America. Inspired by what had become a truly global event, in 1913, Coubertin designed what would become the symbol of the Games: the Olympic rings. (His original design is shown above.)

The Olympic rings have been used in every summer and winter Games since 1920 and have remained relatively unchanged since. The exception to this was a version introduced in 1957, which slightly increased the space between the rings. However, in 2010, the IOC decided to go back to Coubertin’s original design and spacing—the iteration of the Olympic rings in use today.

Symbolism of the Olympic rings

Humans have long used rings or circles as symbols, but in the case of the Olympic rings, they have special meaning. For instance, the five rings represent the five continents that participated in the 1912 Games. And according to Rule 8 of the Olympic Charter, “the Olympic symbol expresses the activity of the Olympic Movement…and the meeting of athletes from throughout the world at the Olympic Games.”

Additionally, the five interlaced rings must be of equal dimensions, representing the idea that all continents are equal at the Games. Lastly, in the words of Coubertin: “These five rings represent the five parts of the world now won over to the cause of olympism and ready to accept its fecund rivalries.”

Meaning behind the colors of the Olympic rings

Given what we know about colors and their many symbolic meanings, it seems like it’d be safe to assume that each color featured in the Olympic rings would stand for something specific, like a continent. But in reality, that’s not the case at all. Coubertin chose the six official Olympic colors—blue, yellow, black, green, red, and white (featured in the background)—because when he introduced the symbol in 1913, every single flag of the nations participating in the games could be reproduced using the colors in the Olympic symbol. Or, in his own words: “The six colors thus combined reproduce those of all nations without exception.”

Official versions of the Olympic rings

Believe it or not, there are currently seven “official” versions of the Olympic rings, according to the IOC. Unsurprisingly, the preferred iteration is the one featuring the rings in all five colors on a white background. However, in situations where it’s not possible to reproduce the Olympic rings in color, monochrome versions of the rings in each of the six official Olympic colors—blue, yellow, black, green, red, and white—are acceptable alternatives.

Evolution of the Olympic rings

While the concept of the Olympic rings may not be new, the symbol itself has evolved slightly over the years and has included these versions, according to the IOC: 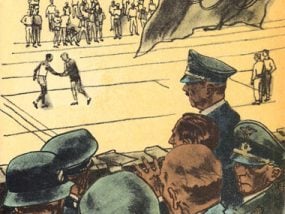 Colors and Symbols of the Juneteenth Flag

The Meaning Behind 24 LGBTQ Pride Flags

Here’s What Happens When You Restrict Someone on Instagram
Why Do We Bob for Apples on Halloween?