When Did Canada Become a Country?

Our northern neighbors will sing about the "True North, strong and free" on Canada Day, July 1. Here's why—and how Canada came to be.

As July 4th rolls around again, Americans’ thoughts likely turn to stars and stripes, U.S. history, and, of course, a long weekend. Most Americans are pretty familiar with the origin story of the United States. But how about the origin story of their upstairs neighbor, which also hosts a national celebration, Canada Day, in early July?

The country now known as Canada is—generally—the land between the Pacific, Atlantic, and Arctic oceans, plus 52,455 islands, and minus the state of Alaska. Canada’s southern border is usually said to be the 49th parallel. Though a July weather map might say that it’s 30 degrees in Vancouver and 86 in Seattle, that’s because Canada uses Celsius rather than Fahrenheit for temperature. While Canada’s nickname is the Great White North, it’s not because it’s always snowing north of the border; as in Seattle, it’s pretty rare for Vancouver to ever see snow. Here are another 20 facts you never knew about Canada.

Take a closer look at that map. The line at the 49th parallel marking the U.S. border looks like it was drawn with a ruler from the Pacific until just after Winnipeg, Manitoba, near the east-west center of the country. Then the border dips south, cuts through four Great Lakes, and continues, bumping up and down, until it reaches the Atlantic Ocean between Maine and New Brunswick. Not only is a significant portion of Canadian soil below the 49th parallel—72 percent of Canadians actually live south of it.

So, how did this huge portion of the sometimes snowy land become Canada, the second-largest country in the world?

Indigenous Peoples have lived on this huge landmass since about 21,000 BCE. One of its first names was Turtle Island—referring to all of North America—used by many people who spoke the Algonquian and Iroquoian languages. Other First Nations used different names, as did European explorers when they started to arrive.

Though they were the First Peoples, they had no say in the decisions that eventually formed the country of Canada from their lands. Even their influence on the name of the country was the result of a misunderstanding. Indigenous Peoples were forced to move from their lands to more remote areas that weren’t wanted by Europeans. This is one of the reasons that, as Canadian Geographic describes, “there’s not a single Indigenous culture group [that] is wholly contained within Canada’s borders.”

The first Europeans in Canada

Only Indigenous Peoples lived in what is now called Canada until the 11th century. That’s when the first Europeans arrived—the Vikings. They built a settlement in what is now the province of Newfoundland and Labrador and called it Vinland, meaning Wine Land. The area is now a UNESCO World Heritage Site, L’Anse aux Meadows.

Later, English and French explorers came. John Cabot, an Englishman of Italian origin, arrived in 1497 and claimed “New Founde Land” for England. In 1534, French explorer Jacques Cartier sailed into the Gulf of St. Lawrence. Thinking they had arrived in the East Indies, these early explorers called the people they met “Indians.” The name they used for the land was, eventually, “Canada.”

The name “Canada” is based on a misunderstanding

The first time the word “Canada” was used to refer to a specific geographical entity was in 1535, by Jacques Cartier, the French explorer who later claimed the land as property of France. Cartier had earlier met an Iroquois chief, Donnacona, and had taken two of his sons to France. When they returned with Cartier, the two acted as his guides. They explained to Cartier how to get to the village of Stadacona, what is now Quebec City, and used the Huron-Iroquois word “kanata,” which means a settlement or a village. Cartier misunderstood both the pronunciation and the meaning of the word. He thought the word was “Canada” and took it to mean the specific area of land that was under Donnacona’s authority, rather than the generic word for settlement. Learn these 30 geography facts that everyone gets wrong.

Cartier and other European explorers used the word “Canada” to describe increasingly larger areas of land. Early in the 18th century, Canada was one of the names for all the French-controlled lands in North America as far south as Louisiana and west to the American Midwest. The lands that became Canada, as well as parts of the United States, were fought over by France and England for decades. In 1759, the British won a battle on the Plains of Abraham—now a historic site in Quebec City. With the 1763 Treaty of Paris, France ceded their colony and Canada became an English possession. A few years later, in 1776, 13 British colonies south of Quebec declared independence from Great Britain and formed the United States.

“Canada” was first used in an official way in 1791, with the naming of the colonies of Upper Canada and Lower Canada. In 1841, the two were united into the Province of Canada. On July 1, 1867, the country called the Dominion of Canada was formed from New Brunswick, Nova Scotia, and the Province of Canada. Want to know more about the anniversary of that day? Here’s a handy guide to Canada Day and how it’s celebrated.

Next to join Canada was Manitoba and the Northwest Territories (1870), British Columbia (1871), Prince Edward Island (1873), Yukon (1898), and Alberta and Saskatchewan (1905). Eighty-two years after Confederation, the last to join was Newfoundland (now called Newfoundland and Labrador) in 1949. The territory of Nunavut was created from the Northwest Territories in 1999, giving Canada the ten provinces and three territories it has today.

Full independence only in 1982 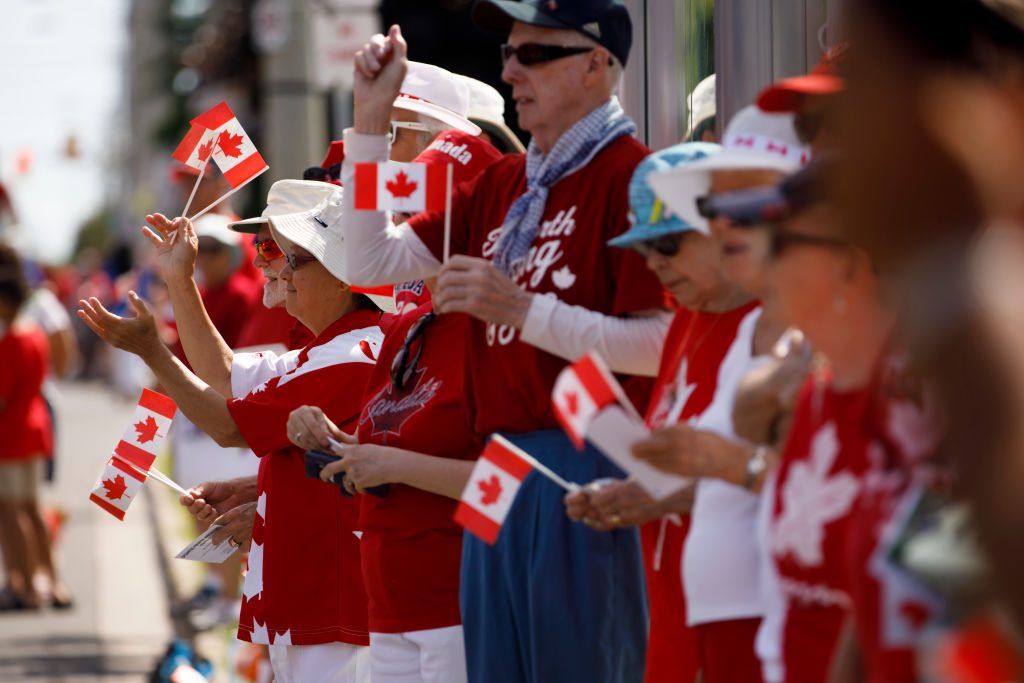 Yes, you read that right—1982. Canada became a self-governing nation on July 1, 1867, with the British North America Act, and its independence increased over the years with full legal freedom granted in 1931 by the Statute of Westminster. But it was only on April 17, 1982, when the Constitution was repatriated, that Canada achieved full independence. That meant changes to the Constitution no longer needed to be approved by the British Parliament.

Today’s ties to Britain and France

Though an independent country, Canada maintains ties to both France and the United Kingdom. Queen Elizabeth II holds the title of Queen of Canada, and her picture is on Canadian stamps, money, and in government offices. The country has two official languages: French and English (which makes this curse word OK to say on the radio in Canada).

Canada is also one of the 88 members of La Francophonie and one of the 54 members of the Commonwealth of Nations, respectively about 12 and 25 percent of the world’s population. In Singapore in 1971, Commonwealth countries pledged to pursue a set of principles including world peace, equal rights, free trade, international cooperation, and democracy, as well as to combat racial prejudice and oppression, injustice, poverty, ignorance, and disease. Canada can now pick and choose the ties it wants to maintain with its former colonizers.

Indigenous Peoples in Canada have had a more challenging road to independence, equal rights, and other Commonwealth principles. Long before European explorers arrived, Indigenous Peoples had their own forms of government. The agreements and treaties that Europeans forged with Indigenous nations were not based on equal relationships, and colonialism eroded Indigenous independence over the centuries.

Canada’s Constitution Act, 1982 guarantees Indigenous Peoples the “inherent right to self-government.” Negotiations to define and implement that have taken decades and continue to this day. Self-government agreements are different for each First Nation; only 25 exist involving 43 different Indigenous communities, though 50 more are in various stages of negotiation. One day, everyone who lives in what is now called Canada may proudly proclaim that they are “True North, strong and free.”

Thinking of planning a trip north of the border? These are the most popular travel destinations in Canada.

Celebs You Didn't Know Were Canadian

Things That Were Invented in Canada

Here’s What Happens When You Restrict Someone on Instagram