Which One Doesn’t Belong? See If You Can Spot the Image That’s Different

Try to solve these challenging puzzles by finding the image that doesn't belong with the rest. How quickly can your eyes spot the difference?

Stare at a visual puzzle long enough, and it can feel like you’ll never find the solution. You’d think that would be a reason to give up, but the challenge is exciting. And discovering the solution? That’s a thrill. Try your hand with this series of puzzles in which all of the images look similar—but they’re not. Which one doesn’t belong? That’s for you to find out.  If you’re a pro at these, you’ll also want to challenge yourself to solve some spot-the-difference pictures.

Work your way through these 19 “which one doesn’t belong” puzzles and see how quickly you can solve them. The answers are right below the images, so if you get stuck, just keep reading. If you want to warm your brain up first, try out these hidden-picture puzzles and these visual puzzles and brainteasers.

In reality, every snowflake has a unique pattern, but in this puzzle only one is different. Can you spot it? Make sure you look closely at each individual snowflake—one of them is not like the others. Which one doesn’t belong?

The sixth snowflake is not like the others. The star in the center has six points, whereas all of the other snowflakes’ stars have five points. 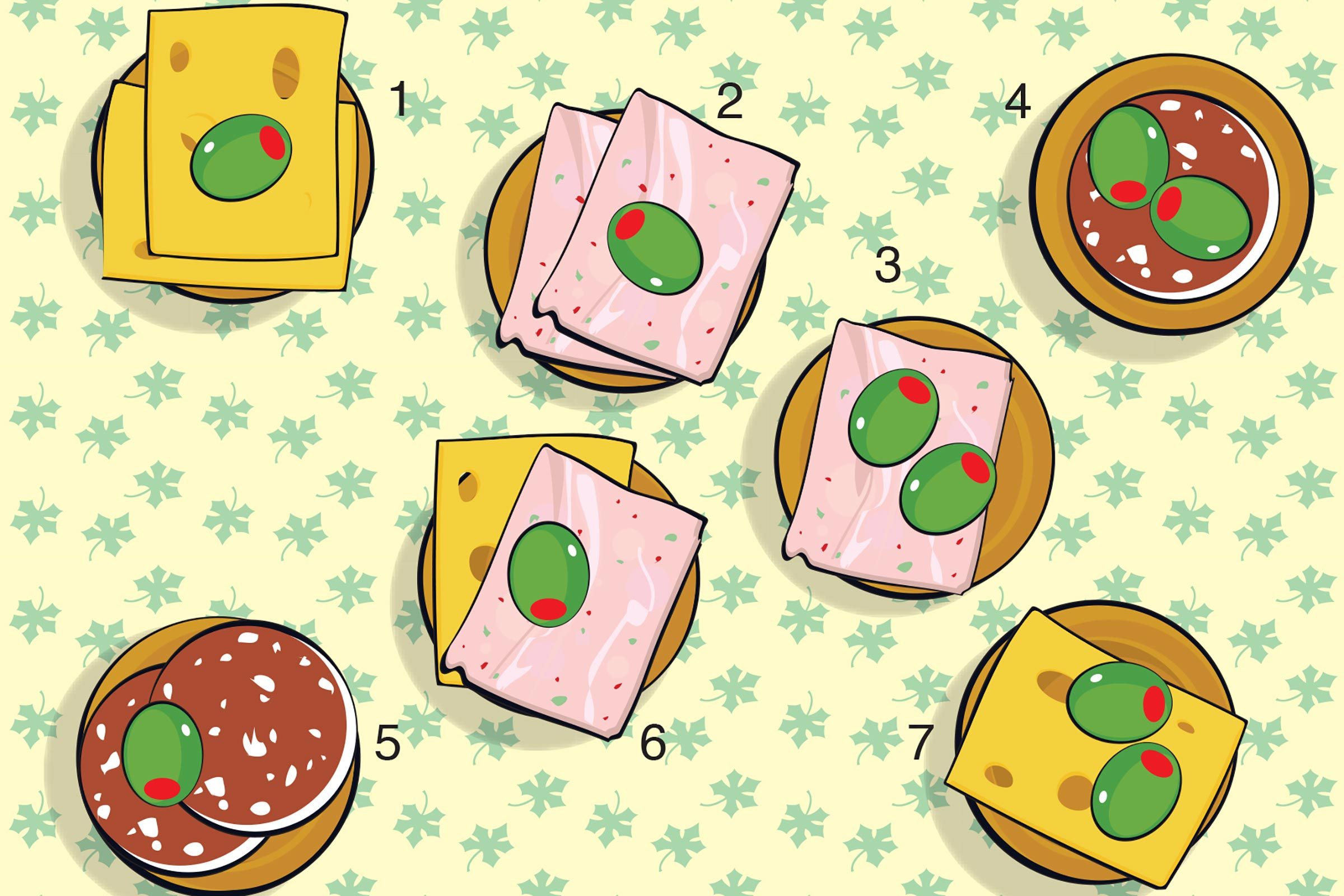 These tasty treats are topped with olives, ham, cheese, and salami. While they differ from one another, one stands out a little more than the rest. Study the different illustrations for a while to see if you can figure it out.

In this image, there are six different Christmas trees. One of them isn’t like the others. Can you figure out which one doesn’t belong? Make sure you look closely at the decorations and the different snow patterns on the trees.

Blue and red, red and blue. Which wheel is different from the rest? Out of these five wheels, one of them doesn’t belong. How quickly can you figure out which one it is?

The wheel that doesn’t belong is number four. The symbol turns in the opposite direction. If you got that right, your brain is primed for some sudoku puzzles.

Look closely at all 12 stars. Which one doesn’t belong? Count how many points each star has and make sure to look at their placement in the sky.

Which one doesn’t belong? Out of these six snowboards, one isn’t like the rest. Don’t worry—you don’t have to be a pro snowboarder to figure this one out.

The snowboard that doesn’t belong is number four. On all the boards, the top of the longest stroke of the X is on the right, but this is reversed on the fourth board. Want more mind-benders? Try these rebus puzzles.

Nine cyclists are competing in a race, but one of them doesn’t belong. Make sure to look closely at their numbers, their shirts, and their bikes.

There are six blue bowling balls, but one of them doesn’t belong. Can you figure out which one it is? This one is tricky because they all look very, very similar.

Did you solve this one quickly? Ball number four has two large finger holes; the other balls only have one large hole. Keep testing your brain with these tough-to-solve math puzzles.

These sparkly carnival masks might appear the same at a glance, but in reality, one is different than the rest. Can you spot which one it is?

Mask number three doesn’t belong. On all the other masks, the pointed side of the eyes aims outward.

These 12 sweet candies might all look similar, but one is different from the rest. How quickly can you figure out which one doesn’t belong? Make sure to look at their placement, wrappers, and colors.

Candy number eight is the odd one out. There are two types of candy with alternating colored grains: yellow and red, and yellow and blue. But on the eighth candy, the color alternates every two grains. It’s so tough to spot, it’s almost an optical illusion!

This one is a bit more challenging because these lollipops all look slightly different. But of the seven sweets, one doesn’t belong with the rest. Can you find the one that is different?

The one that’s different from all the rest is lollipop number five. For all other lollipops, the second and fourth rings (starting from the outer edge) are identical colors.

Which two lipstick kiss marks do not belong—knowing that the woman only had four lipsticks of different colors?

Kisses number four and seven do not belong with the rest. She only has blue, green, red, and pink lipsticks.

This is another image where all the illustrations already look slightly different, but there is one that doesn’t belong. Can you figure out which flower branch isn’t like the others?

Flower branch number two doesn’t belong with the rest. On all other branches, the top flower has just as many petals as flowers on the branch.

If you think word searches are tough, try this puzzle from heating oil supplier Heatable. There are all sorts of plumbing tools—but one of them is not like the others. In fact, it’s broken! Can you find the one broken tool in this tricky brainteaser?

All of these duckies are looking pretty snazzy in this puzzle from PlumbNation, but only one of them is sporting a tiny tuft of feathers. Can you pick it out of the crowd?

Arachnophobes beware! Most of these creepy-crawlies have even sets of fangs. Some have two, and some have four. Some are hiding their choppers, while others are baring rows of teeth. But only one is missing a fang. Can you spot it? This spooky puzzle comes to us courtesy of greeting card manufacturer Scribbler.

It’s a triple whammy with this puzzle from Christmas Tree World: You’re challenged to find not one but three Christmas trees without stars on top. It’s harder than you’d think!

These snow people are all looking pretty dapper, but one of them is missing a button! Most of them are rocking three buttons, but one only has two in this head-scratcher from eyewear company Feel Good Contacts.

The wintry brain-teasing fun continues. While all of these smiling snowmen look uniform, one is a little different than the rest. Hint: Look at the colors.

To test your brain even more, purchase your own copy of Mind Stretchers: Volume One. Puzzle editor Allen D. Bragdon keeps you on your toes with over 150 puzzles.

The Trickiest Riddles for Adults

Try to Solve the Viral Riddle

How Many Squares Do You See?

Morgan Cutolo
Morgan is the Senior Production Editor at Trusted Media Brands. She graduated from the University of New Hampshire in 2016 where she received her Bachelor of Arts in Journalism. She works with our Production Coordinators to keep content moving and make sure that things are working well behind the scenes for all our digital sites. In her free time, she likes exploring the seacoast of Maine where she lives and works remotely full time and snuggling up on the couch with her corgi, Eggo, to watch HGTV or The Office.