Why Does My Dog Sigh?

Why does my dog sigh, you ask? Well, it's about time you learned to speak your pup's "sigh language."

You’re sitting on the couch, minding your own business when you hear a deep, heavy sigh from the other end of the couch. You look up, startled, because you’re the only one here…well, except for…Doggo. You look up, and there they are, tail thumping, staring at you in that way they often do. If your instinct tells you that your best buddy wants you to let them out in the backyard to chase squirrels, then give yourself a pat on the back because you’re already speaking “sigh language,” even if you didn’t know it. Here are a few more things your dog wishes you knew.

So…why does my dog sigh?

“Dogs are highly emotional beings, just like humans,” explains Joanna Woodnutt, MRCVS with DoggieDesigner. “Just like humans, there are times when they need an outlet to express those emotions. Sighing is one such outlet.” In other words, the question, “why does my dog sigh” must be answered with yet another question, namely…

What emotion are they trying to convey?

Who among us hasn’t at one time or another wished they could flat-out ask their dog, “What are you thinking right now?” But one need not be a mindreader, or a modern-day Dr. Doolittle, to come to a logical conclusion with just a bit of sleuthing on two points:

When asking yourself “why does my dog sigh,” the first thing to do is consider the context, explains certified dog behavior consultant, Russell Hartstein, CDBC, CPDT-KA of Fun Paw Care. What was going on just before the sigh? Were you giving them tummy rubs? Or were they ripping up one of your shoes? If it was the former, it would be a good bet to lean toward positive emotions. If the latter, that sigh may mean your dog is trying to convey they are stressed out about something.

“When trying to decipher what your dog may be telling you with a sigh, it is important to look at the entire dog, from head to toe, because body language signals don’t act individually,” points out Kait Hembree, head of training at GoodPup, a virtual dog training service. Tail wagging? Good sign. Hair standing on end? Not a good sign. If you see any of these behaviors from Doggo, they might be in need of obedience training.

Here are some of the emotions your dog may be trying to convey to you when they sigh, along with the ways you can recognize them and distinguish one from another:

Dogs and humans have been evolving together over thousands of years, and dogs have learned new skills to be able to communicate with us, points out Dr. Woodnutt. Just like your dog can yawn in response to you yawning, your dog might sigh in response to your letting out a sigh. It reflects the bond between humans and their dogs, which has been developing over the centuries. “We don’t really know if they’re trying to communicate their empathy or just copying us, but it’s comforting all the same,” she says. 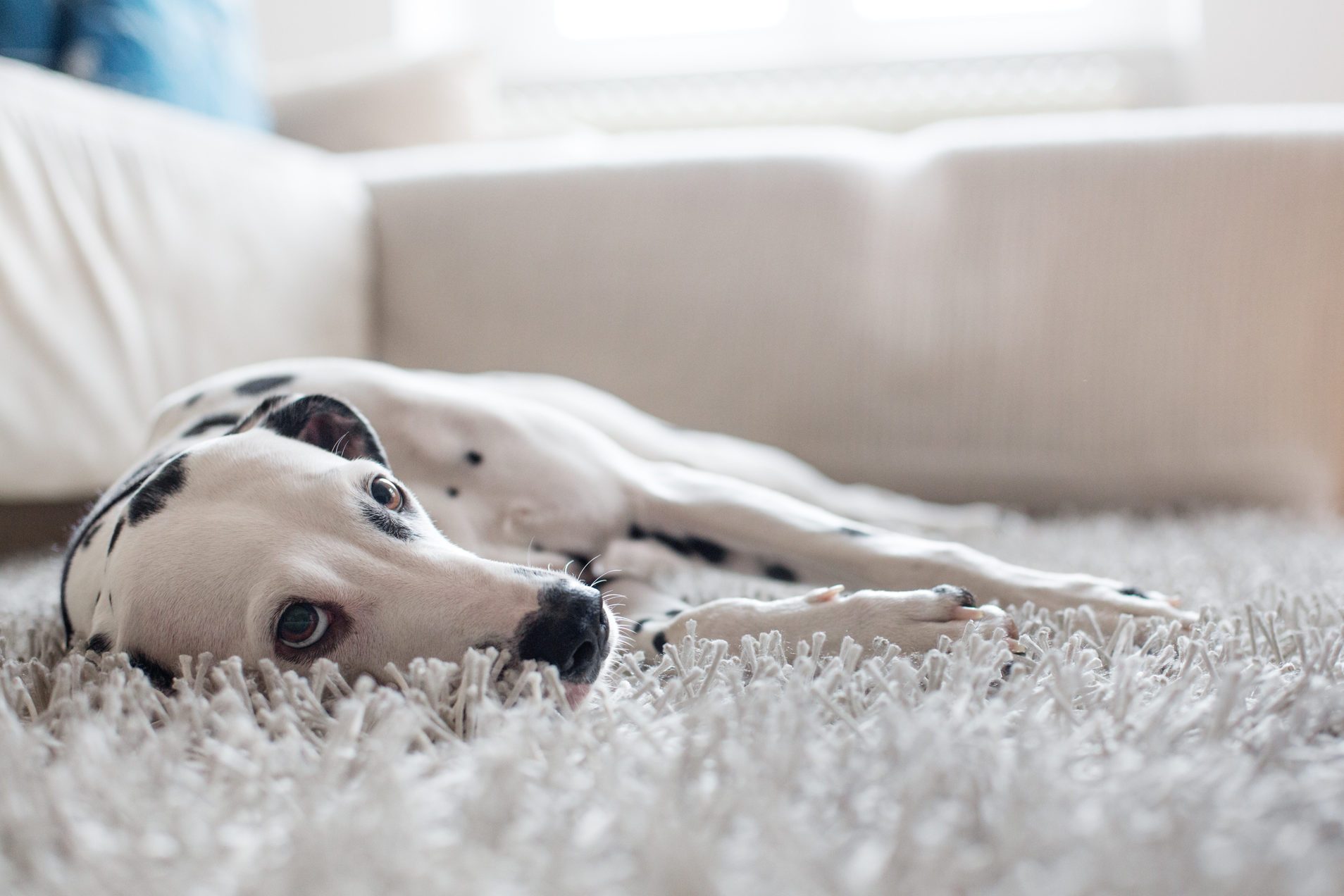 If your dog just ate or you patiently played fetch for as long as they wanted, your dog might just be inclined to reward you with a sigh, Dr. Woodnutt suggests. In other words, let’s say you’ve been scritching Doggo under the chin for a few minutes when they let out a nice, big sigh. Their relaxed face, waggy tail, and slightly closed eyes tell you that sigh was meant to express that they not only like what you’re doing, but they would also like you to continue doing so for as long as possible. Here are 60 strange things you never realized make your dog tick.

When a dog sighs because they feel relaxed, it’s not all that different from when they sigh out of happiness. In both cases, you can read the context and their body language to know, at least, that they’re feeling something positive, But when they sigh to express that they’re feeling relaxed, it’s likely they’re also signaling they’re done with the activity that made them happy, points out Sarah Wooten DVM, of Pumpkin Pet Insurance. In other words, that relaxed sigh will come after they’re finished eating, playing, or getting scritches. And you’ll know they’re done because they might even lay down for a nap, points out Gerardo Perez-Camargo DVM, Vice President of Research and Development at Freshpet.

Sometimes a dog will sigh out of boredom, notes Leslie Brooks, DVM, a veterinary advisor at betterpet, an online resource promoting responsible pet ownership. If Doggo happens to be pacing around when they sigh, it could well mean they’re looking to get outside and expel some energy, Dr. Brooks adds. That’s especially true if he’s been home alone all day.

They need attention or wants something else from you

Your dog might sigh to let you know they’re in need of attention, according to Jay Scott, DVM and proprietor of Pugsquest, a website dedicated to pugs and their care. When that’s what’s going on, you’re likely to notice he’s pacing or otherwise very visibly moving around, especially if they keep brushing up against you. In a variation on your dog being in need of attention, sometimes your dog will sigh because they want something else from you, something you’re currently not providing. Perhaps they feel dinner is overdue. Or maybe they really want to go out for a walk. “Just like humans, dogs can be manipulative like that,” observes Dr. Wooten. Don’t feel bad if you make any of these 53 mistakes every dog owner makes from time to time. 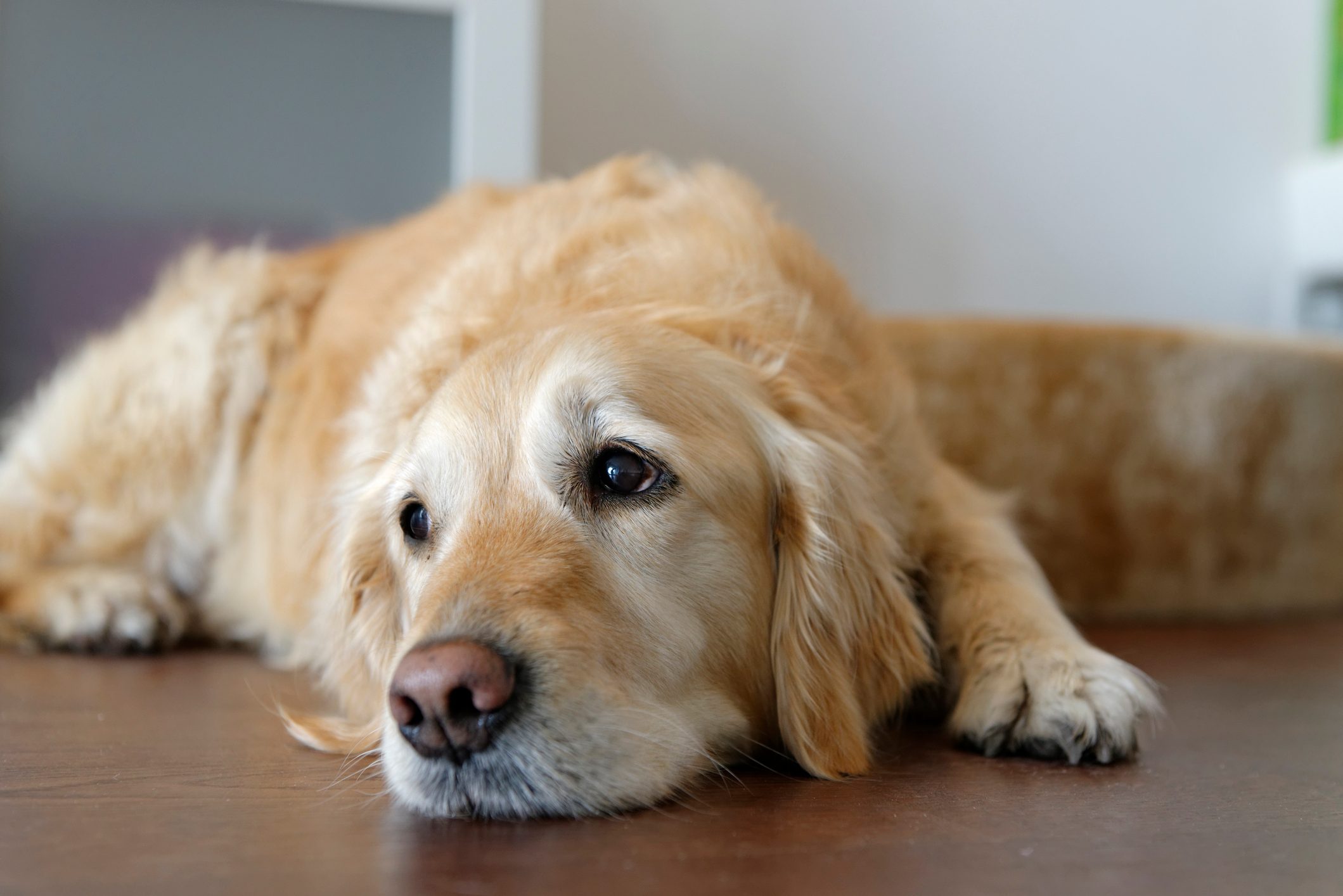 A sigh that comes after you’ve missed all the hints Doggo’s been dropping is most likely a sigh of disappointment. Debbie Jansen LeBlonde, a professional dog walker in Connecticut notices this in her own best buddy, her shih-pooh, Ozzie. “Right after I get home from work, Ozzie immediately starts pacing back and forth in front of the front door. If I don’t pick up his leash pretty quickly after that, he sighs. A heartbreaking sigh that gets me to do exactly what he wants.” If your dog has been making a big show of inviting you to play, and you don’t take them up on the invitation, don’t be surprised if they make another big show of giving up, lying down, and sighing heavily,” points out Jamie Richardson, DVM, Medical Chief of Staff at Small Door Veterinary, “If you’re still not sure, look for your dog to be lying down with their eyes fixed on you and fully open. Some might even see it as an accusatory glance.” Here are some really brilliant ways to keep your dog busy while you’re busy working.

Unfortunately, there will be times when your dog’s sigh signifies sadness. Once again, context and body language should clarify it for you. If one of their favorite humans isn’t home, and they’re refusing to get off the couch when they’re normally active, their sigh could be an expression of sadness because they’re missing that human, according to Dr. Woodnutt.

Another reason your dog might sigh is that they’re ill or otherwise in pain or discomfort. If sighing is a new and persistent behavior for your dog, it could be worth having them examined by a veterinarian, says Sarah Nold, DVM, staff veterinarian at Trupanion. The cause could be as minor as a tummy ache from something they ate. But sighing is also sometimes associated with respiratory issues such as bronchitis, asthma, and pneumonia. Often, it’s a question of which other symptoms, if any, are present. More worrisome symptoms that can accompany dog sighs include lethargy, loss of interest in eating or playing, excessive coughing or wheezing, and vomiting and/or diarrhea, points out Sara Ochoa, DVM, small animal and exotic veterinarian in Texas and a veterinary consultant for doglab.com. Also, if your dog is shifting around and/or groaning in between sighs, it’s possible they’re experiencing pain. Please be on the lookout for these 10 signs of illness that are sometimes seen in dogs that seem otherwise healthy.

Like humans, dogs can experience mood disorders. If along with your dog sighing, you notice an increase in panting, nose licking, shaking, or excess yawning, your dog may be trying to tell you they don’t feel so good…mentally, according to Mike Gould, Founder and CEO of doggie daycare brand Hounds Town USA. Next, make sure you know these telltale signs your dog is depressed.

The Easiest, No-Fail Way to Tell If Eggs Are Still Good