The details aren't random. Every bit of this legendary celebration has a story. 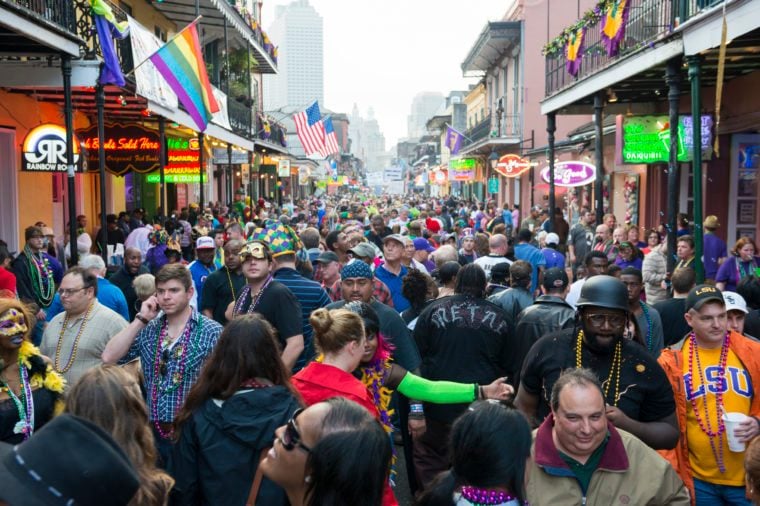 The reasons behind the revelry

Each year, around 1.4 million people descend upon New Orleans for the city's annual Mardi Gras celebration. Though many people think of the holiday as Fat Tuesday—the day before Ash Wednesday, when the Christian season of Lent begins—it actually starts on the Feast of the Epiphany on January 6th and continues for several weeks before concluding on Fat Tuesday. And there's a lot more you probably don't know about Mardi Gras, including the reasons for the many customs associated with the festivities. Make no mistake about it: They're not random. Here's why some of the most distinctive customs are included in this legendary, months-long party. 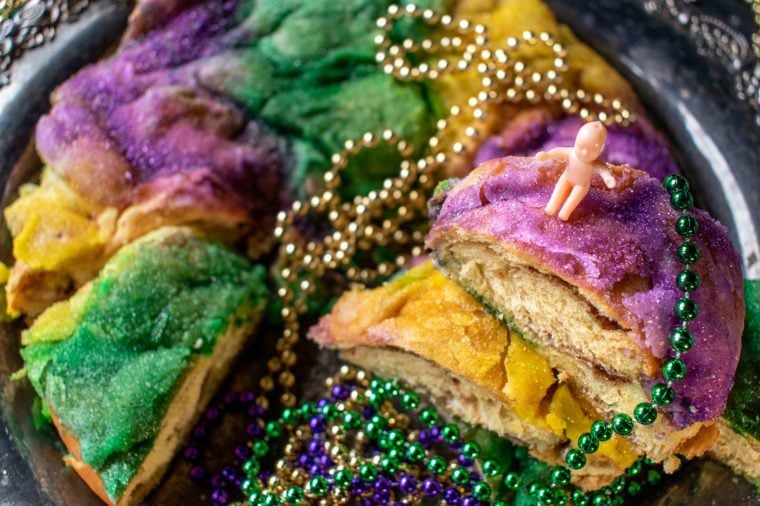 If you've never had a chance to try a king cake, you're missing out. While some say the delicious circular pastry dates back to 1870s France, others think it originated in the Middle Ages. Either way, it is typically associated with Christianity—specifically, the feast of the Epiphany. This occurs each year on January 6th (also known as the twelfth day of Christmas), and it and represents the day that the three magi (or kings) visited the baby Jesus. The popular cake has since expanded its reach to the Mardi Gras celebration in New Orleans, which is several weeks after the Epiphany. A small plastic baby or some other type of trinket is baked into each cake. Whoever ends up with the baby is responsible for the next king-cake party. Want to learn more about cakes? Here's the fascinating history behind the birthday cake. 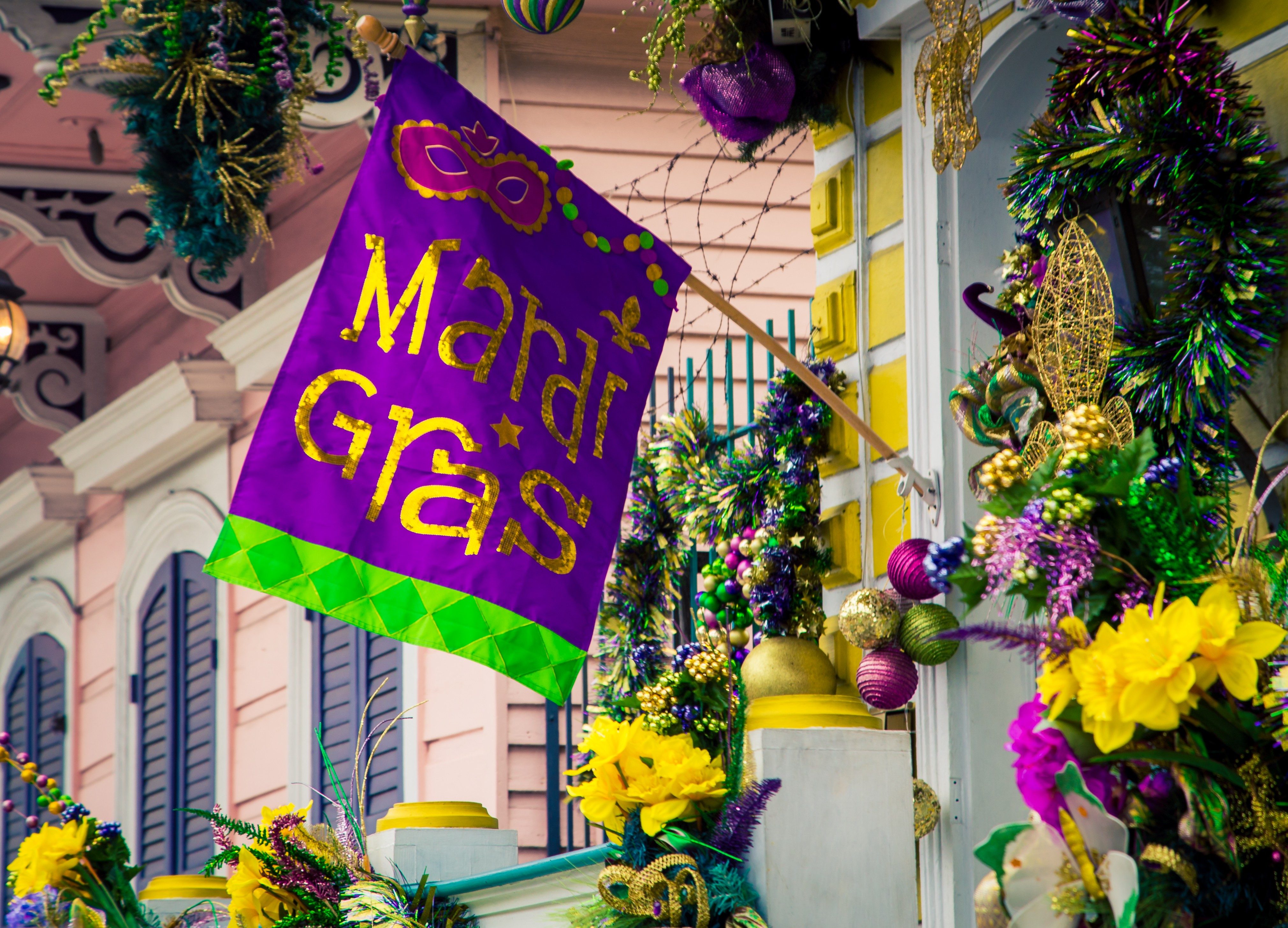 Most Mardi Gras decorations are gold, yellow, and purple, but have you ever wondered why? Back in 1892, the theme for the Rex parade was "Symbolism of Colors," at which point the three hues were designated as the official colors of the celebration. The colors were chosen because gold represents power, green represents faith, and purple represents justice. But why three colors instead of one or two? The Rex founder decided that Mardi Gras—like any other country or kingdom, including the United States, France, and the United Kingdom—needed three colors in its flag. Here are another 9 random things you never knew had an official color. 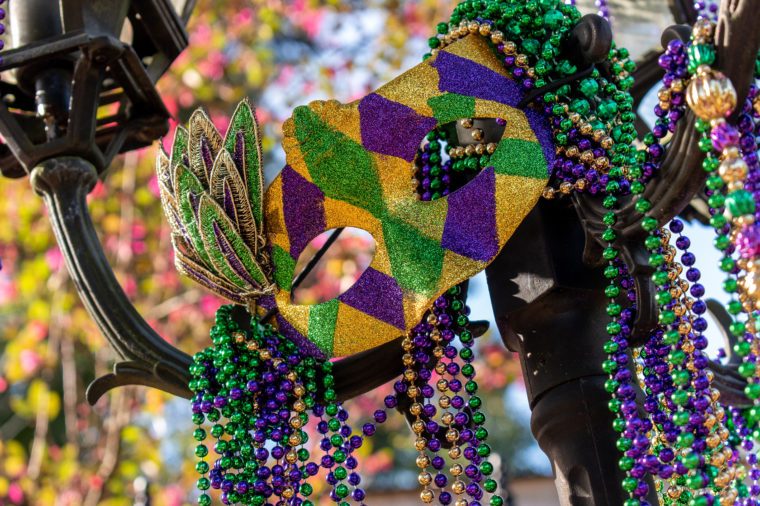 Along with beads, masks are an integral part of any Mardi Gras celebration. Though masks have been used all over the world for centuries, this tradition started in the early days of Mardi Gras in New Orleans as a way for people to get around socioeconomic constraints and designations. For these few days each year, people were able to transform into other personas as they moved about the city. Unfortunately, this didn't always work for women, who could have their reputations questioned if they wore masks. Here's why Mardi Gras float riders continue to wear masks today. 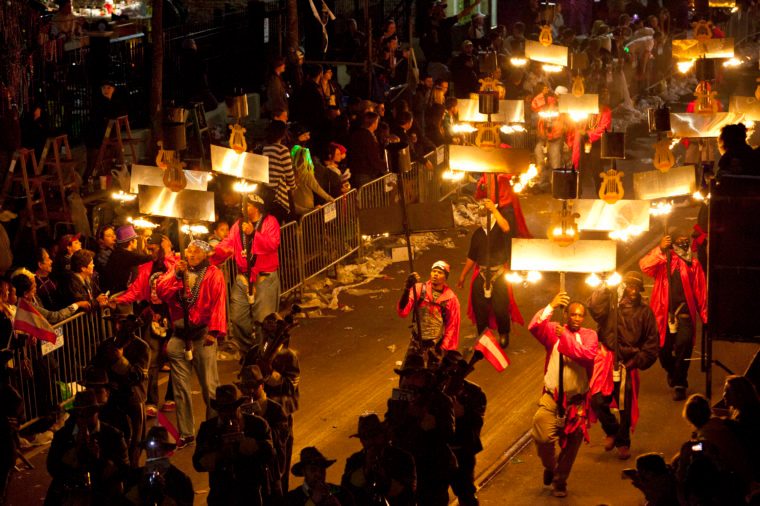 Flambeaux—or flaming torches—are another traditional part of Mardi Gras. The first flambeaux were used at the celebration of 1857 and began as a way to allow attendees to see what was going on during the parades held at night. Originally, the flambeaux were carried by men of color, both enslaved individuals and free men who were primarily Creoles. The men would perform elaborate dances while carrying the torches, and onlookers would throw coins in the street as tips for the dancers. Though flambeaux are no longer a necessity thanks to modern infrastructure, they remain an important part of the celebration. In case you were wondering, this is what people in New Orleans actually think of Mardi Gras. 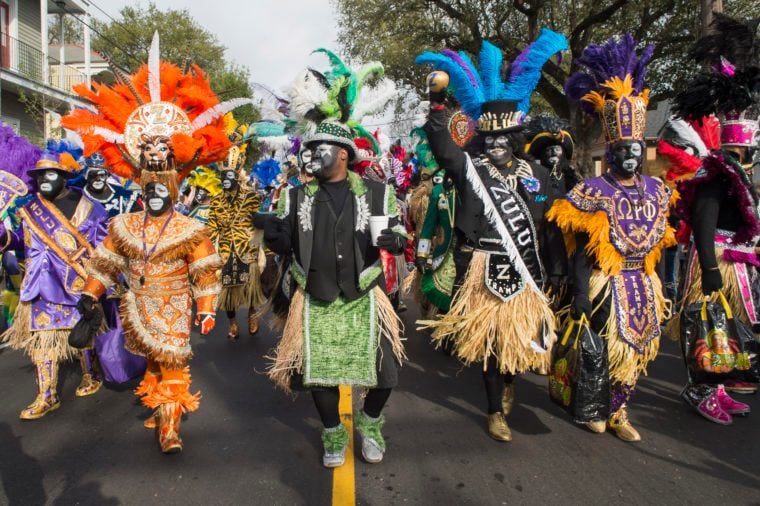 If you've heard about "krewes" associated with Mardi Gras but aren't sure what they are, you've come to the right place. In short, krewes are different clubs in New Orleans that organize and put on the Mardi Gras celebrations in the city. They date back to 1857 when the Mystick Krewe of Comus put on the first Mardi Gras parade and coined the term. In fact, it was the krewes that originated many of the traditions we're discussing here, like flambeaux and masks. The five first krewes in New Orleans were Comus, Momus, Twelfth Night, Rex, and Proteus, and membership was initially limited to rich white people. As a result, many new krewes popped up during the beginning of the 20th century to accommodate groups that had been left out, including women, African Americans, Irish, Italians, and Germans. Today, there are more than 70 krewes. Already been to Bourbon Street? Here are the best places to celebrate Mardi Gras outside of New Orleans. 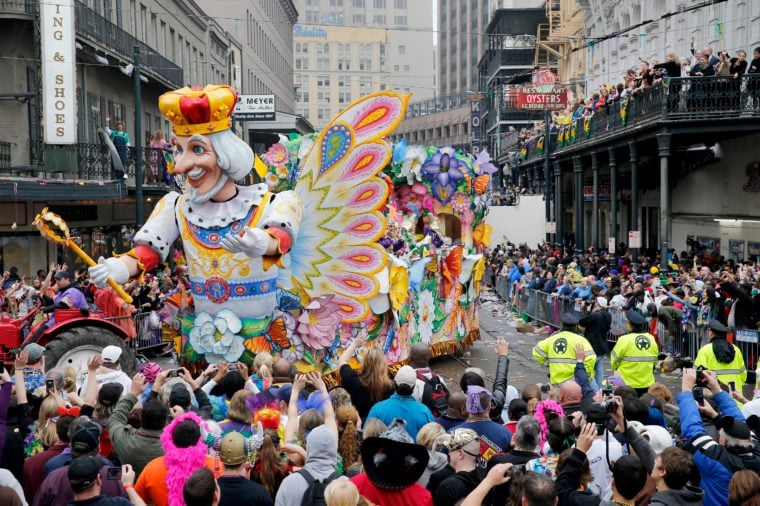 Mardi Gras has been celebrated in what is now the United States since 1699 when French explorers Pierre Le Moyne d'Iberville and Sieur de Bienville landed near present-day New Orleans. They celebrated their arrival and named the spot where they landed "Point du Mardi Gras." This turned into an annual party, featuring balls and street parties until the Spanish took control of the region and outlawed these celebrations. The Mardi Gras festivities that we know today started up again in 1812 when Louisiana became a state, and they evolved in 1827 when a group of students danced in the streets wearing colorful costumes. A decade later, the first official recorded Mardi Gras parade was held in New Orleans. For more legendary fun, check out the best St. Patrick's Day parades in the United States. 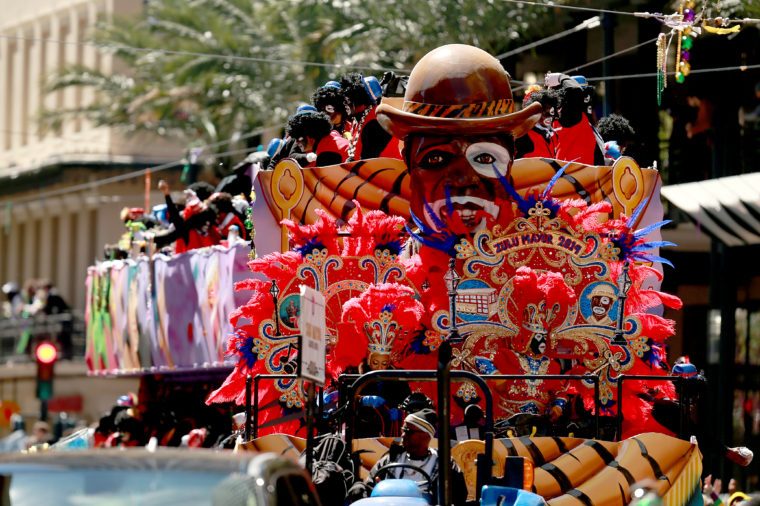 A memorable parade typically involves floats, and the ones used in the Mardi Gras celebrations certainly fit the bill. Ranging from being satirical and political to ornate and beautifully decorated, the floats add a new dimension to the parade every year. Many of the city's krewes select a theme for each year's festivities, and the floats are created according to that theme. But these aren't public projects to begin with—most floats are made in secrecy in "secret dens," with the big reveal happening each year at the parade. There are typically between 14 and 40 full-sized floats in a Mardi Gras parade. No matter much you plan, of course, things occasionally go awry. Here are the biggest float fails from Macy's Thanksgiving Day parades over the years. 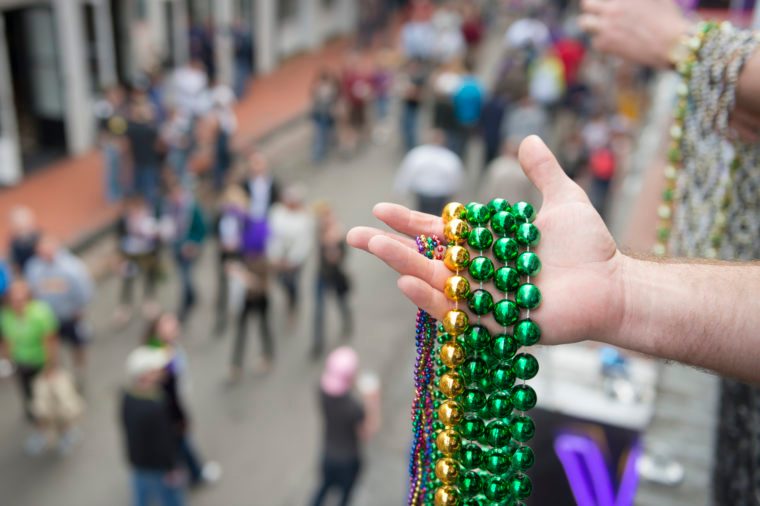 One of the most common associations with Mardi Gras is the alleged tradition of women exposing their breasts in exchange for beads tossed from parade floats. But the thing is, this isn't actually a Mardi Gras tradition in most of New Orleans. According to the Mardi Gras New Orleans website, "saying it is 'tradition' is like saying that people who get drunk and pass out on Bourbon Street are following tradition as well." This tends to happen in the French Quarter, where many Mardi Gras attendees who are visiting from out of town tend to congregate. People who are interested in that type of celebration gravitate toward that area every year, and the so-called "tradition" continues. Also, you won't find people flashing for beads at the parades and celebrations in other parts of the city. Don't miss these other wild parties around the world. 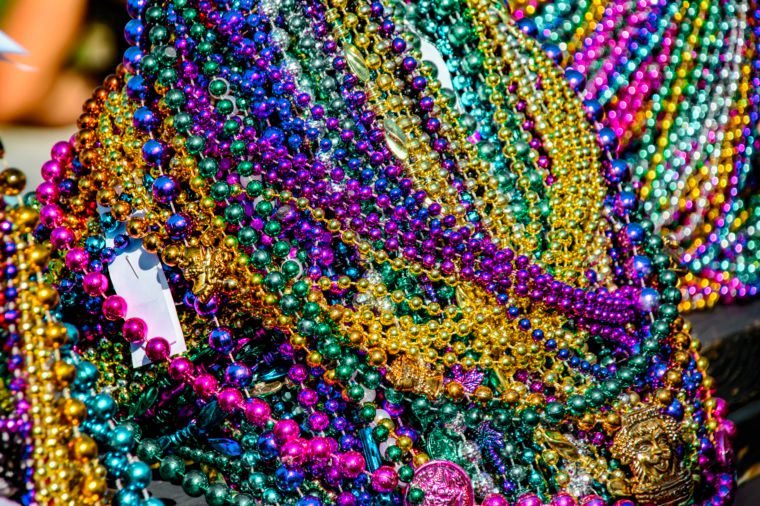 Many of the krewes come to the parade prepared with some sort of small objects to cast off from their floats, known as "throws." Beads are, of course, the most popular and well-known of the throws. Parade onlookers can shout, "Throw me something, mister!" at the krewes if they're interested in receiving beads or whatever else they have that day. The tradition of throwing beads is thought to have started in the 1890s when one of the carnival kings threw strings of beads and fake jewels to his "loyal subjects" on the route. By the 1920s, this became common practice, though the beads were made of glass at the time; they didn't become the plastic version we know today until the 1960s. As much as people enjoy this tradition, it's not great for the city's infrastructure: A few years ago, approximately 93,000 pounds of beads were found clogging New Orleans' storm drains.