James ConawayUpdated: Sep. 25, 2019
From the book The Forgotten Fifites

These photos, including some never-published shots taken for Look Magazine, transport you back in time. Was life easier, harder, or the same for families in the 1950s, compared to today? 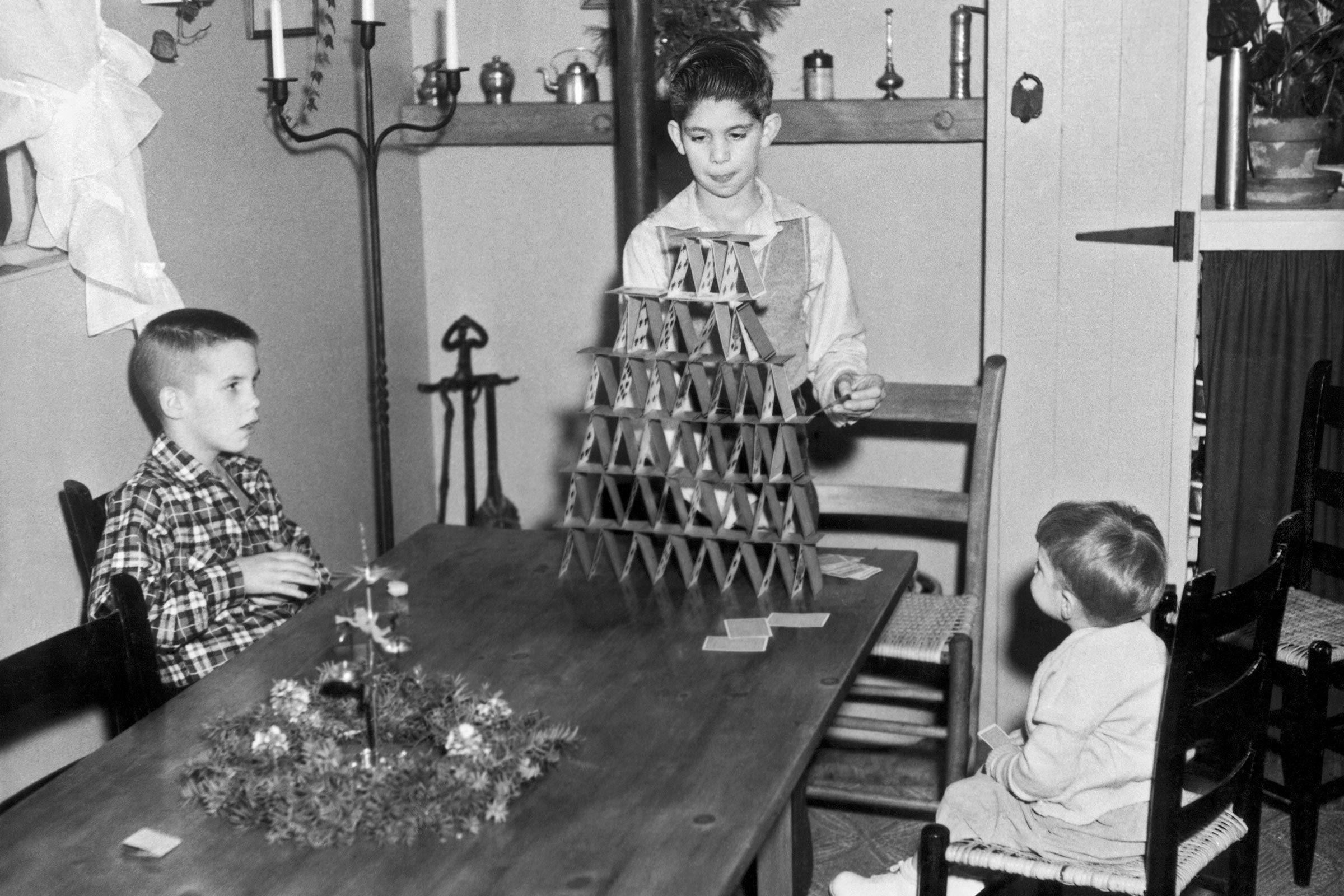 “Nobody bump the table!” In this image from 1950, a dedicated young architect finishes up an impressive card tower that must have taken hours to make! His little siblings watch as he stacks the final cards. Here are some more vintage photos of what playtime was like for kids before technology. 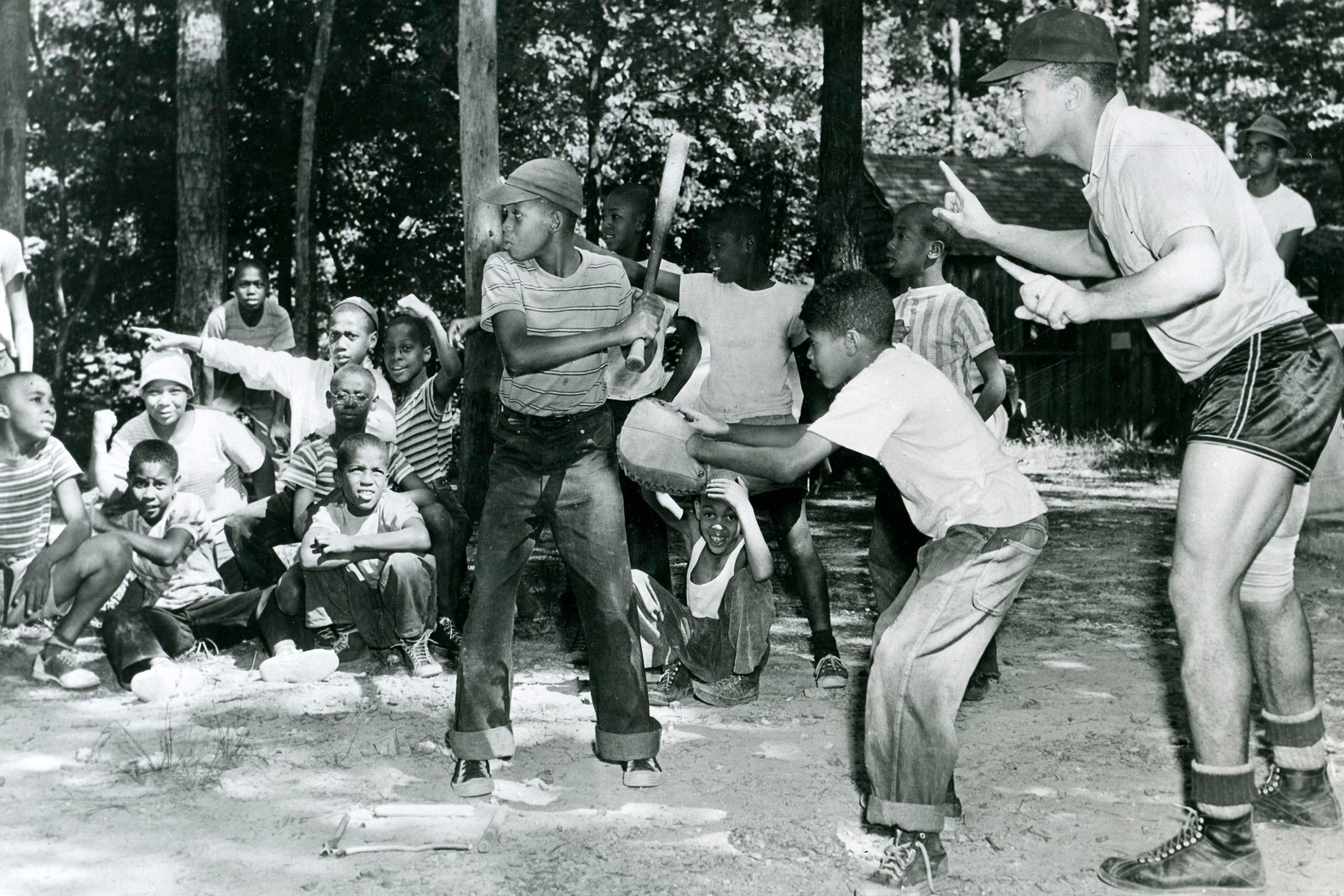 Boys at a summer camp outside Washington D.C. play an afternoon game of baseball. A fun outdoor activity for all teammates. 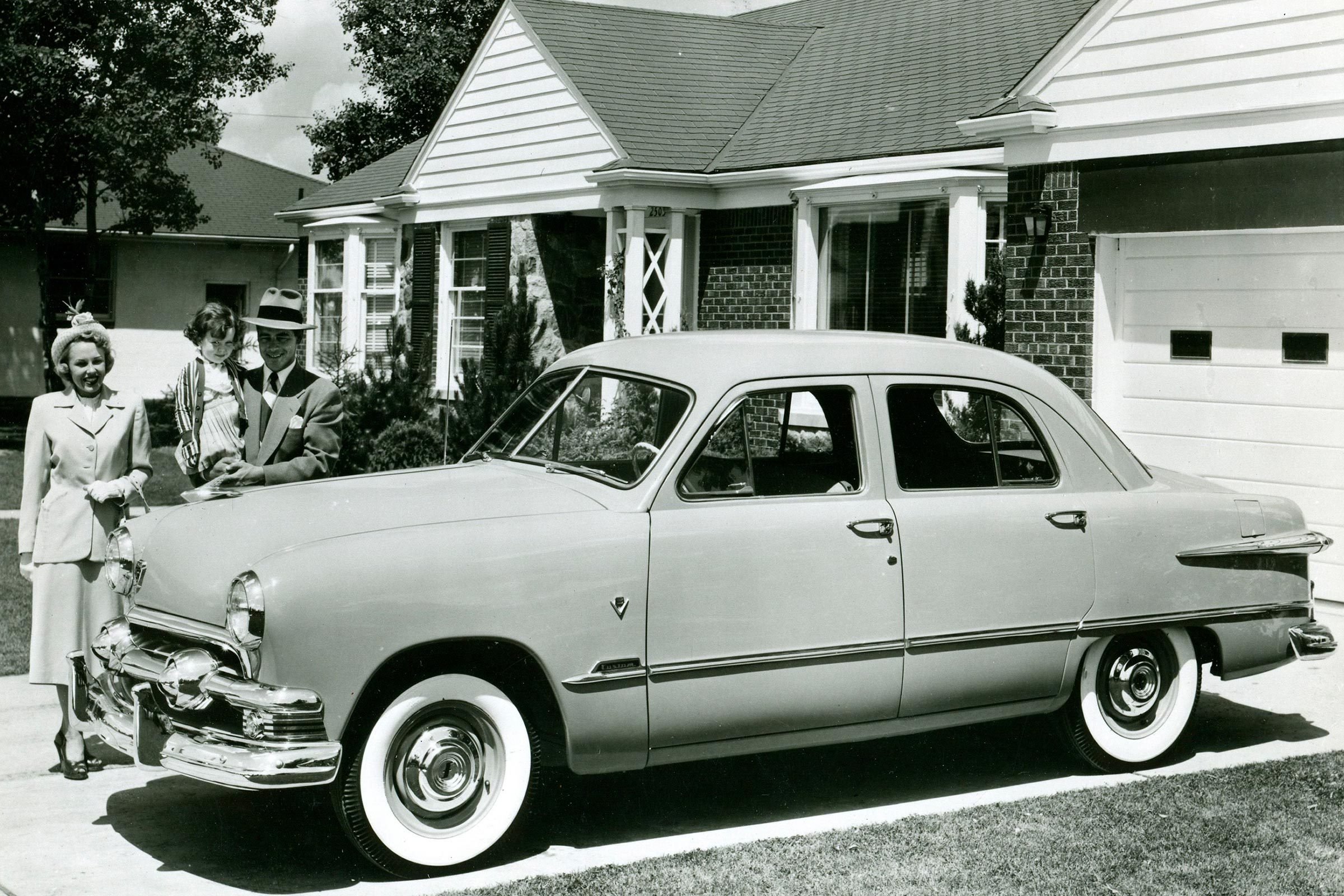 In Detroit, this family of three smiles in front of their home with their state-of-the-art 1951 Ford Custom Fordor Sedan. Check out these ads for vintage cars you’ll wish you could own today. 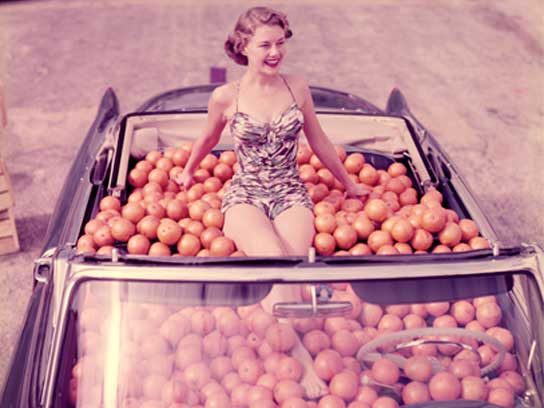 Cheering from the sidelines

The photographers of Look Magazine could never resist the chance to take a picture of a woman in a swimsuit—the one here was probably taking part in Miami’s Orange Bowl parade, which was held from 1936-2001. 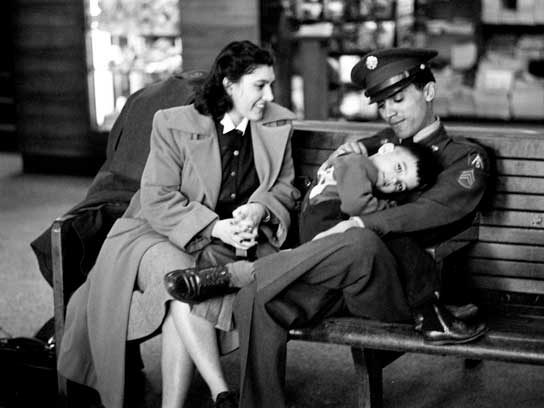 Women did not serve in combat, but this soldier was on his way to fight in the Korean War, which lasted from mid-1950 through mid-1953. Check out this in-depth look at what it was like to be a woman in the 1920s. 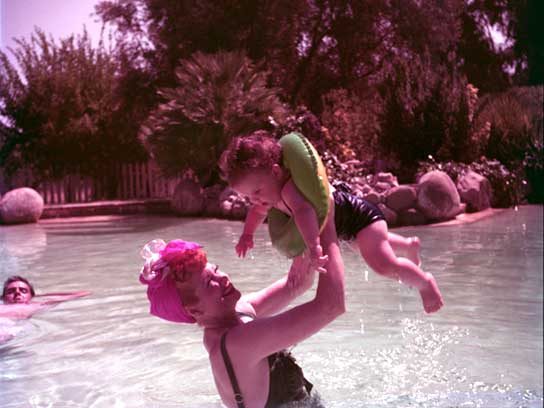 Even stars had to be good mothers

This photo, taken a year after I Love Lucy aired (the series ended in the fall of 1957), shows the enormously successful TV star Lucille Ball in a more domestic setting. Avidly covered by magazines and newspapers, Ball appeared on the cover of TV Guide 45 times, more than any other celebrity. 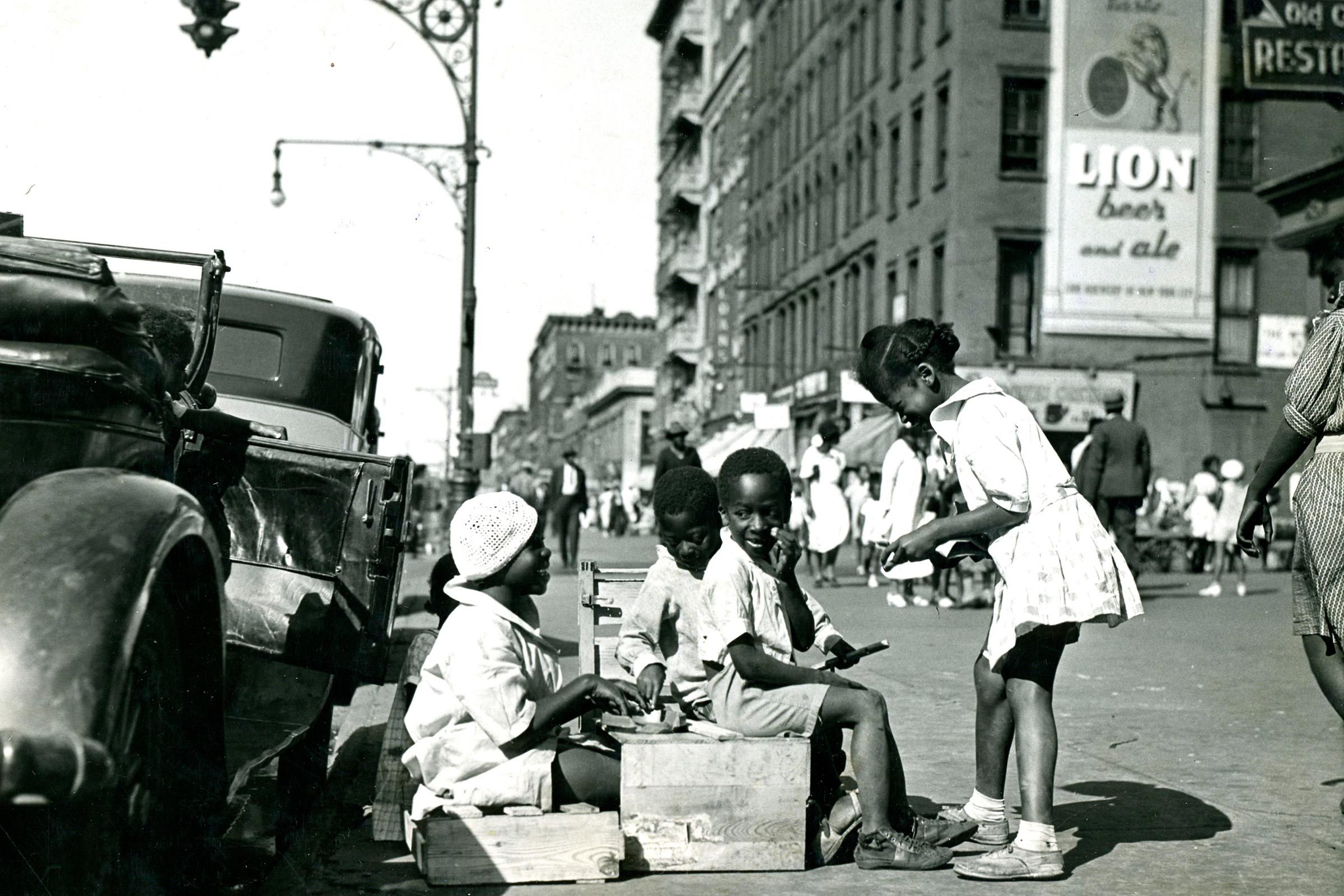 A group of young girls entertains themselves playing on the streets of Harlem in New York City. 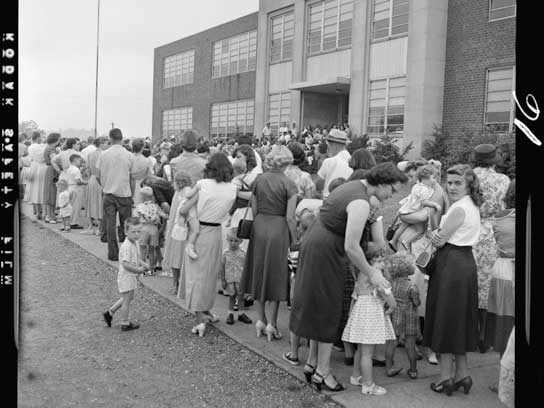 The year before this photo was taken, there was a polio epidemic in the United States with 58,000 cases identified in that year alone. In 1952 the polio vaccine was developed, and during its testing period, until it was licensed in 1955, women waited in line for hours to try to get the trial vaccine for their kids (as seen here). The word miracle is overused, but this vaccine and a later oral vaccine were just that, virtually eliminating the disease. In 2012, there were only 223 polio cases in the entire world. 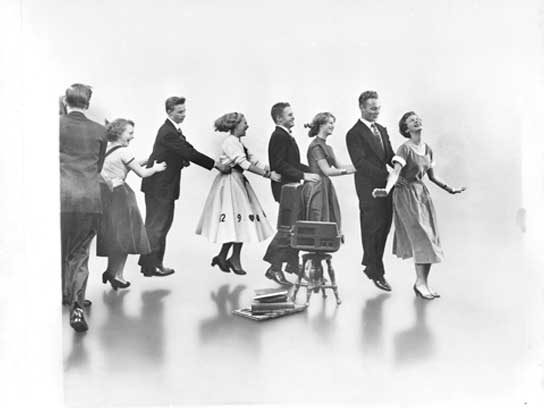 Dance crazes were especially popular during the 1950s and 60s, with names like The Twist and The Mashed Potato. One of the earlier fads was The Bunny Hop, a conga-line formation which originated among students at San Francisco’s Balboa High School in 1952. Speaking of trends, find out what the most popular toy was the year you were born. 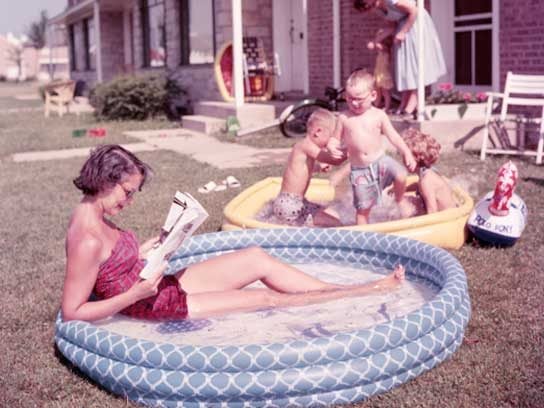 Making do with what you had

Today, in Park Forest, Illinois, you can find an Aqua Center with a 367,000-gallon pool with four slides. But back then, hot homeowners found relief on a much smaller scale. 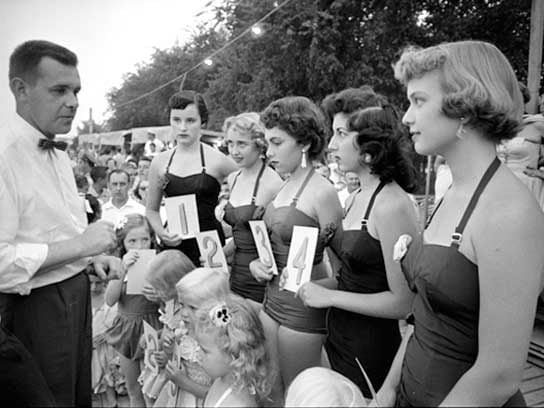 Although the modern bikini had been introduced eight years before this pic was taken at a beauty pageant in Park Forest, Illinois, it was still considered too racy for many American women. It took French bombshell Brigitte Bardot wearing a bikini in the 1957 movie And God Created Woman for the two-piece swimsuit to reach the mainstream. Many of the little girls are sporting outfits with modestly flouncy skirts. Get a look at some photos of vintage swimsuits we totally wish would come back in style. 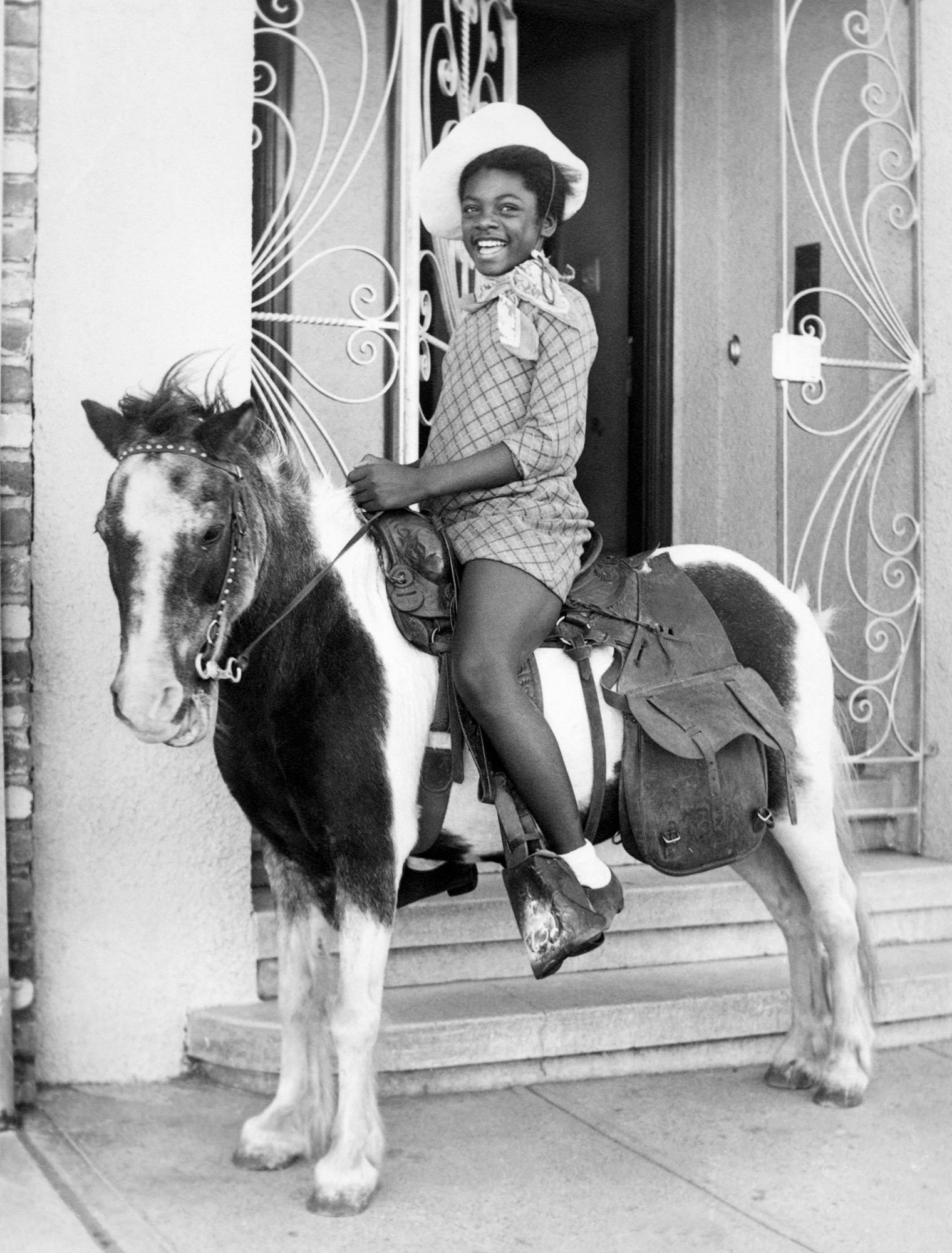 A very happy little girl proudly rides her pony around. 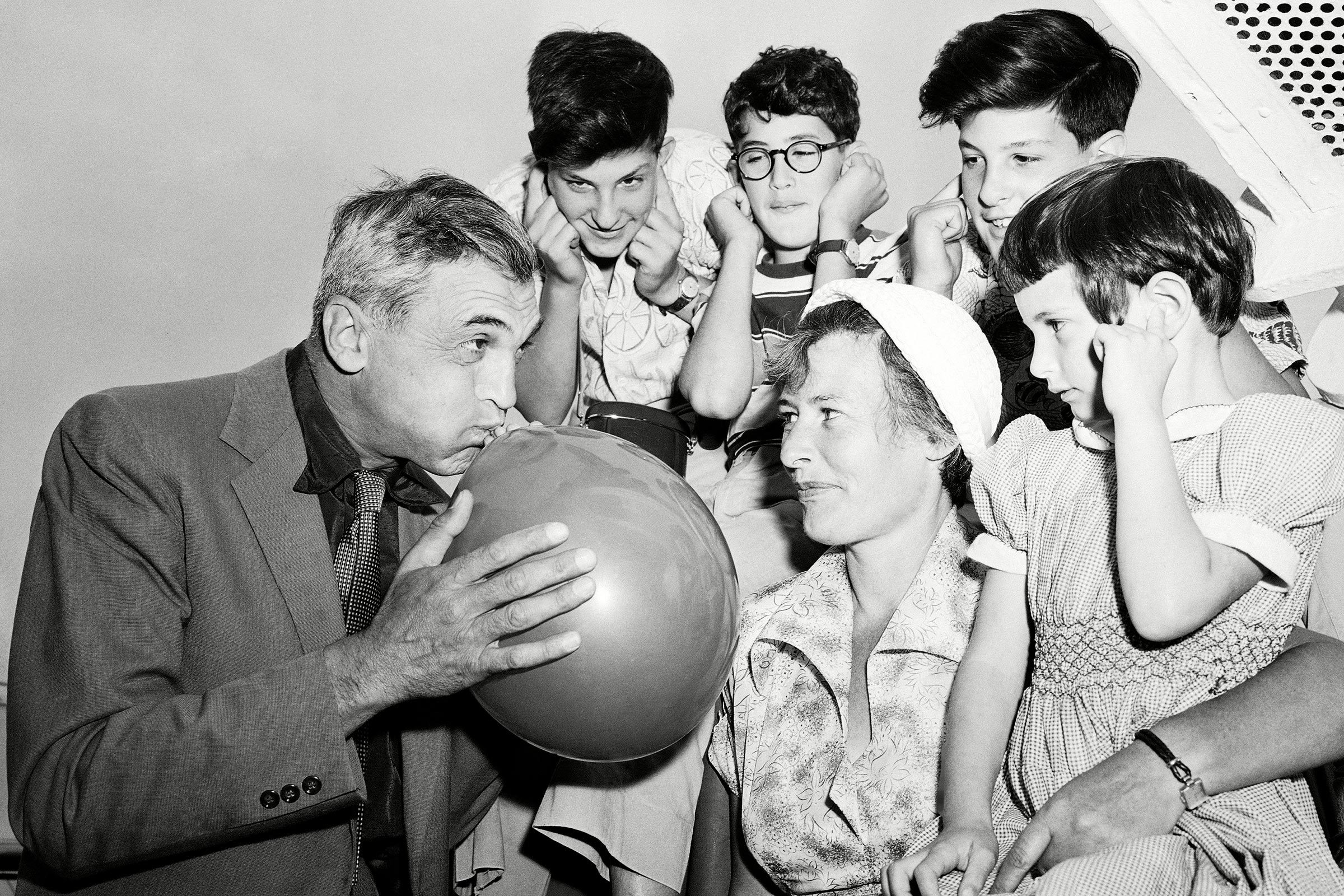 Even a Nobel Prize-winning physicist needs to have a little fun sometimes! Here, Professor Felix Bloch, a Swedish-born physicist who spent much of his life teaching at Stanford University, blows up a balloon while his wife and four children watch. Some things never change—the kids cover their ears and brace themselves for the loud “pop!” In 1952, three years before this photo was taken, Bloch was awarded the Nobel Prize for Physics for developing a new method for measuring the magnetic field of atomic nuclei. But, as this photo makes clear, he never ceased to be a family man. 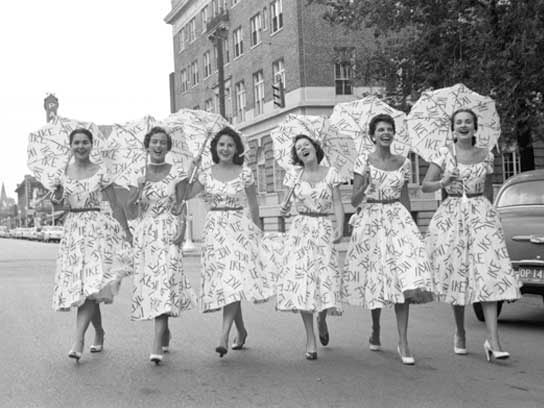 These Ike Girls first made an appearance in 1952 as part of “Draft Ike,” the first successful grassroots effort in the 20th century to bring a private citizen, WWII hero General Dwight D. Eisenhower, to the White House. (The ones shown here were drumming up the vote for Ike’s second term.) Today, these Ike umbrellas and garments are collectors’ items, but you can find several girls’ school sports teams with the name “Ike Girls.” Check out the most artful presidential campaign posters from the past 120 years. 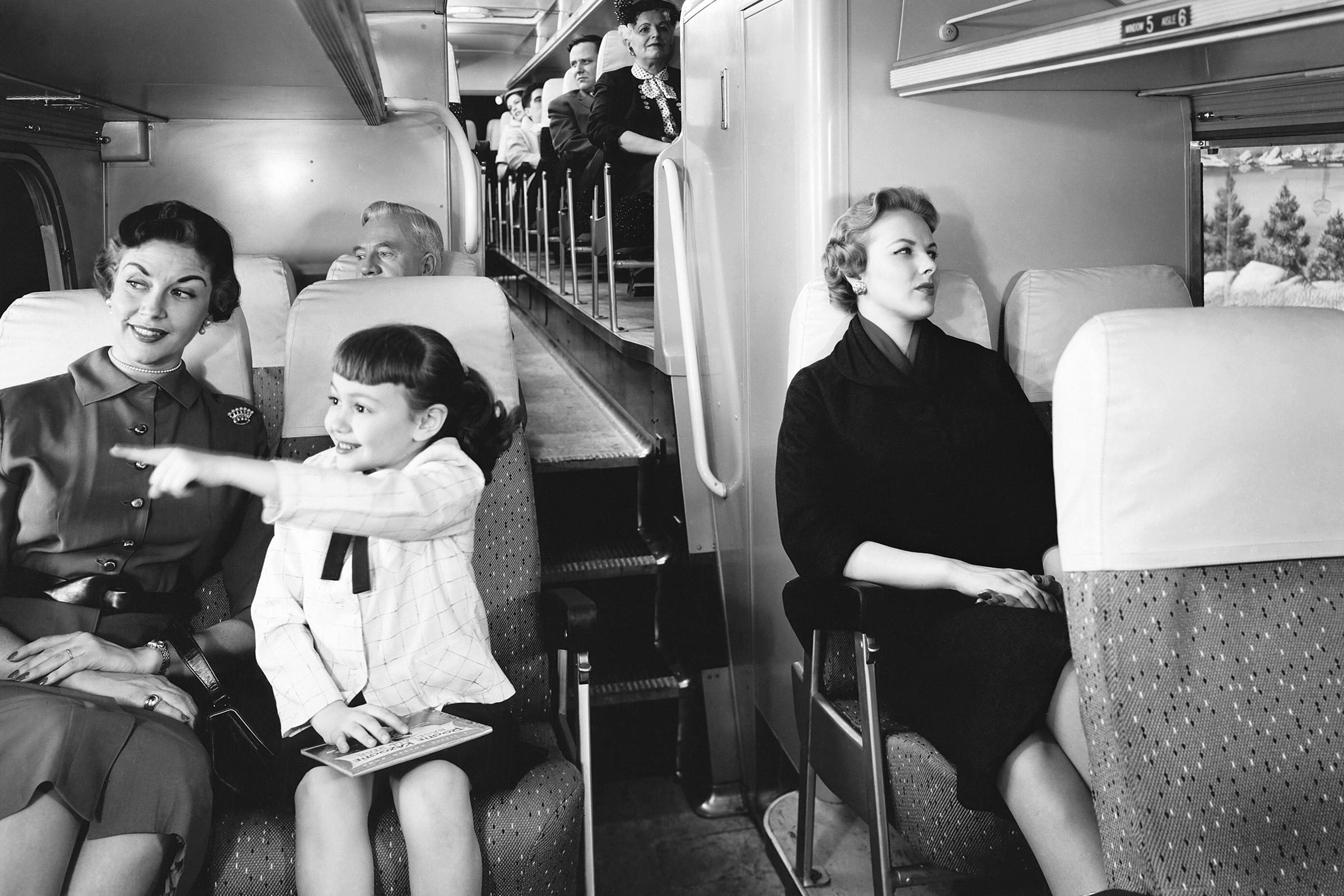 The joy of traveling is alive and well for this mother and her young daughter in 1957. The pair of passengers experiences the luxury of Greyhound’s dual-level Scenicruiser bus, which had debuted a few years before in 1954. 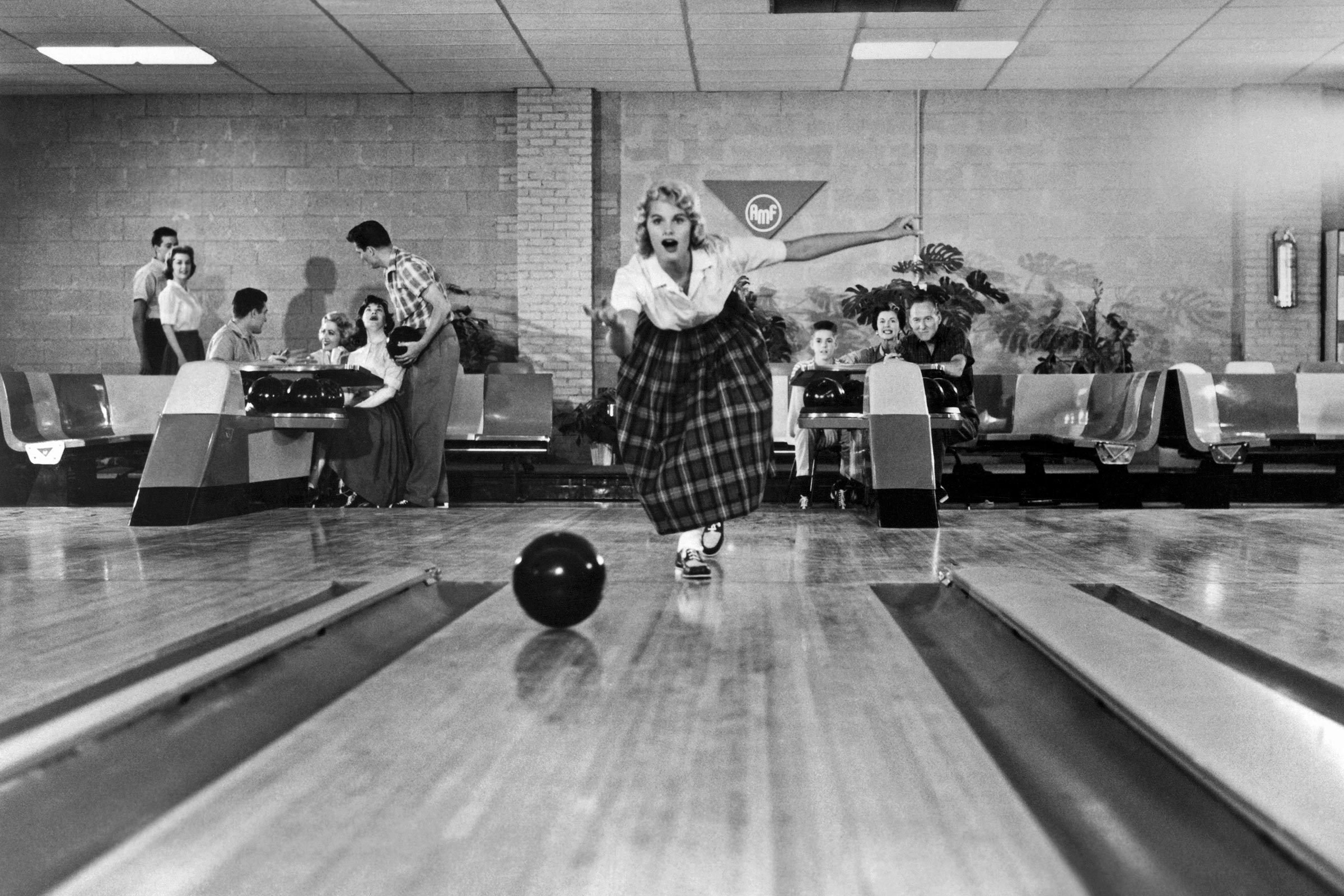 A trip to the alley

This 1958 woman aims for a strike at the bowling alley. We’ve got to give her props for going all-out with her throw, even in this long, old-fashioned 1950s skirt! 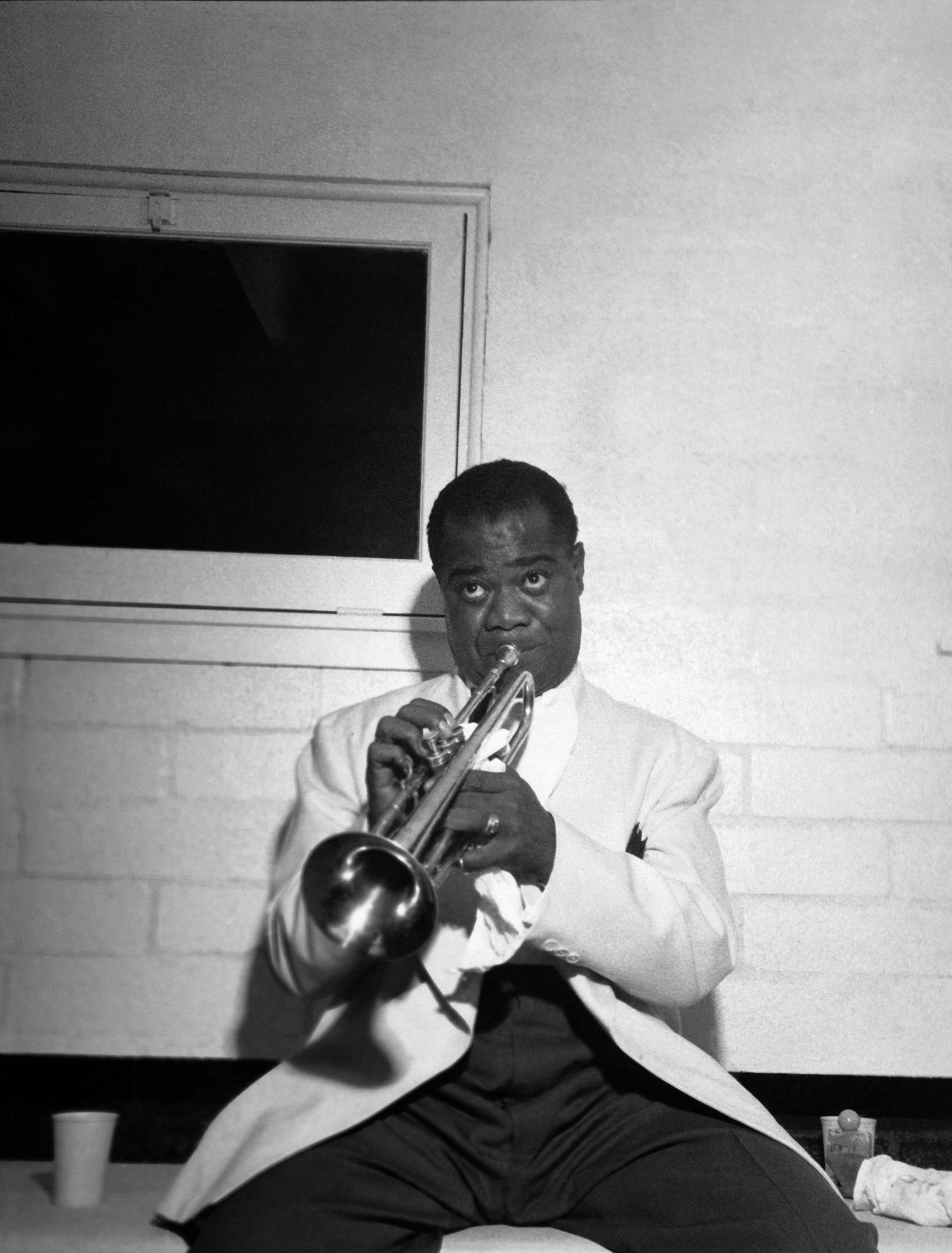 Trumpeter Louis Armstrong hits some high notes on his trumpet in 1950. 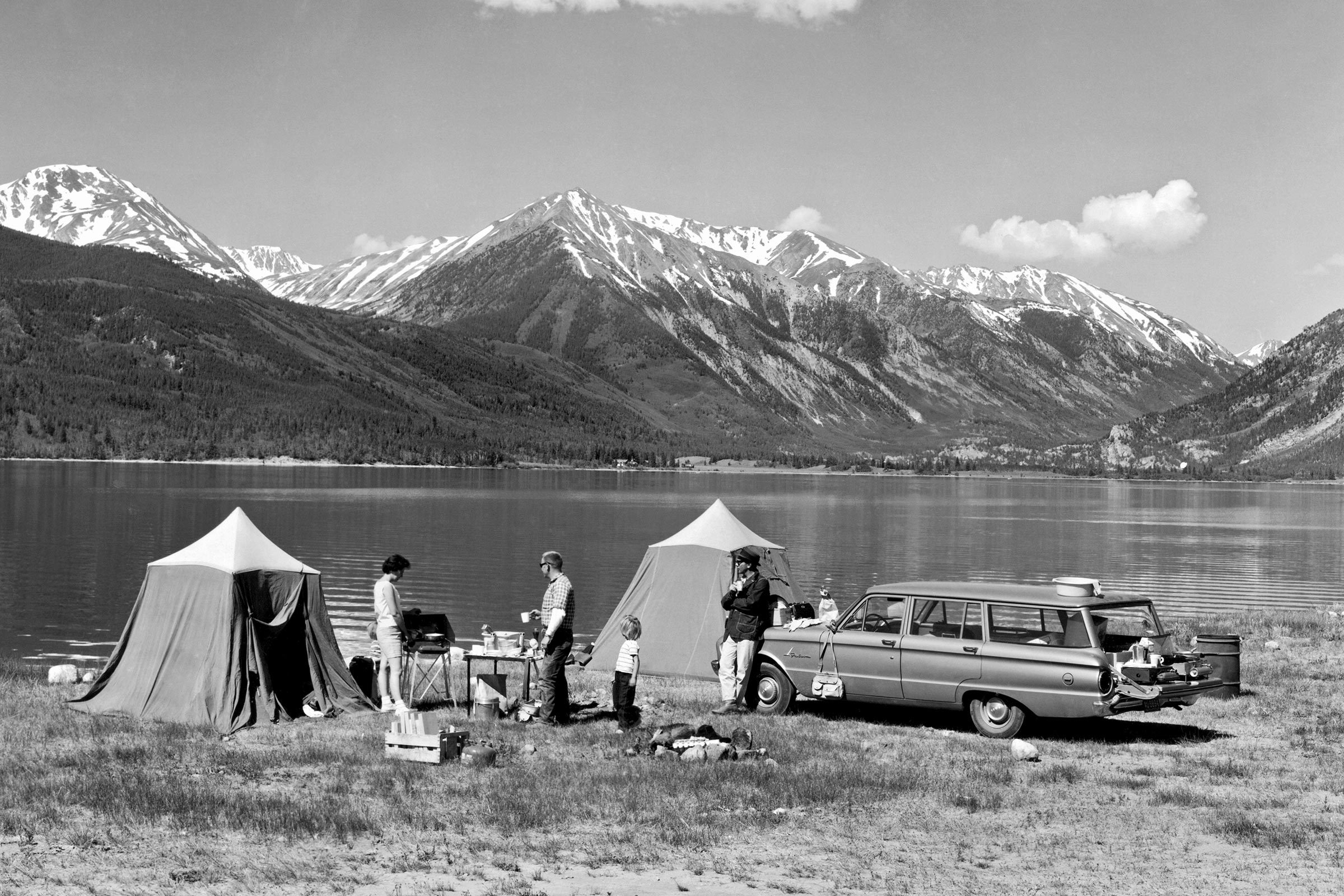 American families past and present are lucky enough to be able to enjoy the splendor of the United States’ national parks. This family picked a prime spot to set up their tents in the midst of the Rocky Mountains in 1959. Check out what these famous landmarks looked like 100 years ago. 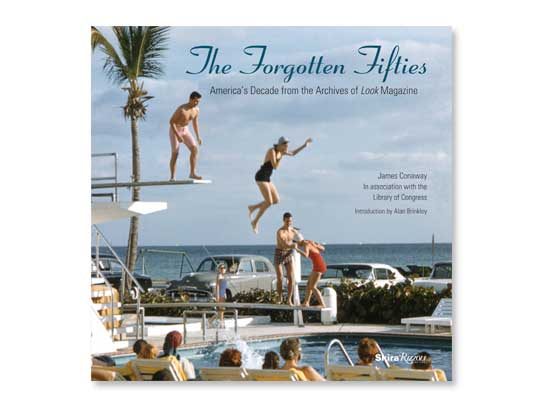 Many of these images are from the nostalgic Skira Rizzoli book, The Forgotten Fifties: America’s Decade from the Archives of LOOK Magazine. The Library of Congress owns the entire archives of Look, which was published from 1937-1971; at its peak, it had a circulation of 7.75 million. Next, check out these rarely seen photos you won’t find in history books.