From a bar in the clouds to finding more water from the Moon, outer space is constantly surprising us. 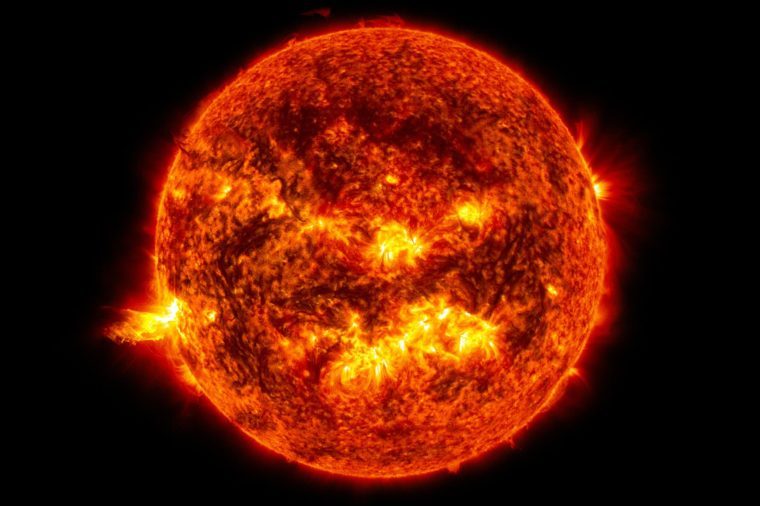 The sun is bigger than you can even imagine

When you look up at the sky and see the sun beaming down at you, it’s hard to tell how truly big it is. So consider this: About a million duplicates of Earth could comfortably fit inside of it, according to NASA’s C. Alex Young, PhD. And if the sun didn’t supply our main energy, we’d be shivering in the dark; its core releases energy that is the equivalent of 100 billion nuclear bombs. That sure explains these strange ways the sun affects your body. 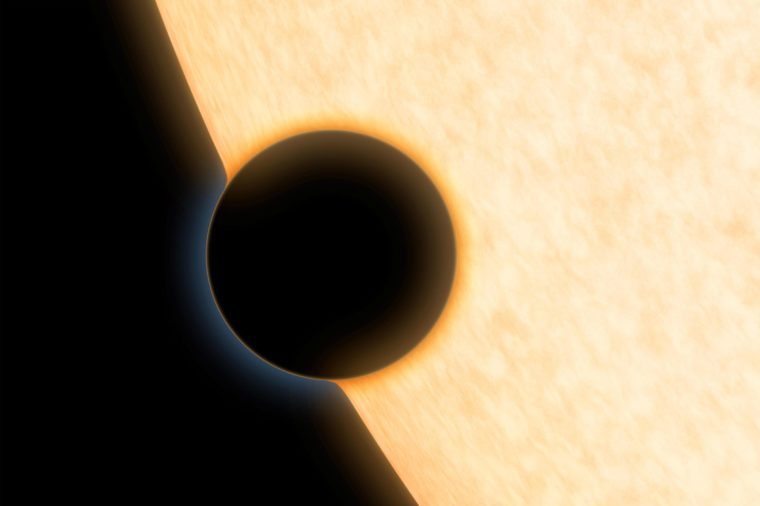 Hot ice is a thing

At 33 light-years away is an exoplanet called Gliese 436 b. The planet is composed of different water elements, which form burning ice. In other words, the ice on the planet remains solid due to pressure, while the extreme surface temperature of 570° F (300° C) super-heats the water, causing it to come off as steam. Whoa… 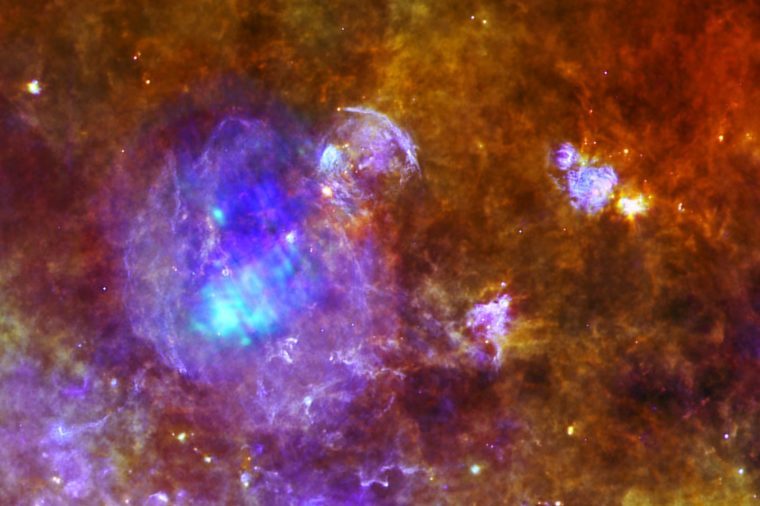 There’s a bar in the sky

It may seem like a bartender’s dream (or nightmare), but way up beyond our atmosphere, there’s a gas cloud made from alcohol about 1,000 times the diameter of our entire solar system. There’s enough alcohol there for about 400 septillion pints of beer (that’s 400 followed by 24 zeros!). To put that into perspective, ScienceAlert notes that’s “enough alcohol to supply 300,000 pints of beer every day to every single person on Earth for the next billion years.” Cheers! 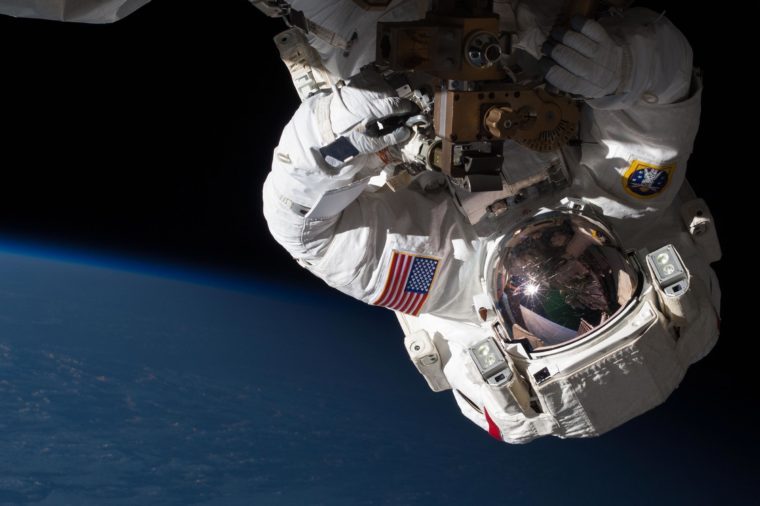 Walking in space might cause you to crave a steak

Astronauts returning from a space walk have noted the aroma of various odors on their space suits ranging from metal to a charcoal-broiled steak. That’s due to polycyclic aromatic hydrocarbons (PAHs), which are by-products of dying stars. PAHs are also released from burning coal, wood, gasoline, and—you guessed it—charcoal-broiled meat. Learn more about what outer space actually smells like. 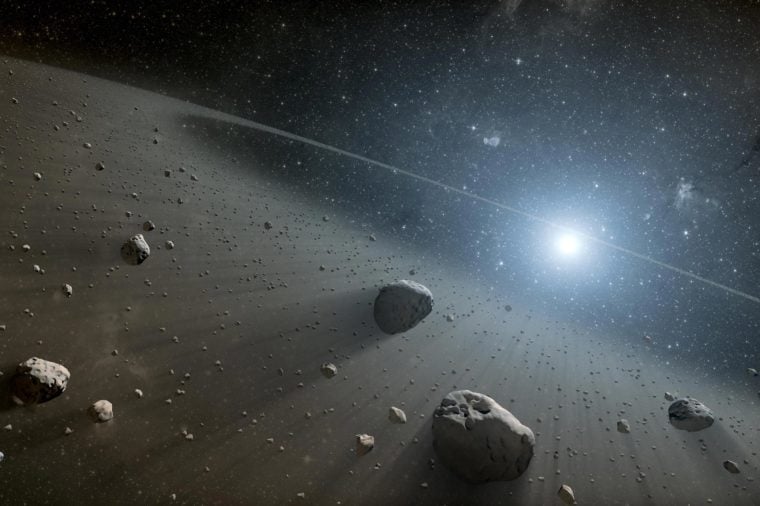 There’s a lot of trash out there

There may be a lot of garbage filling up our landfills on Earth, but there are over a million pieces of trash orbiting the earth, too, reports BBC News. Space junk is a real problem and even something as small as a paper clip could wreak havoc on our satellite system—that could mean no Netflix for you, among more serious issues like messing with our National Security system. Currently, there’s no great way to clean up space, but scientists are focusing on solutions. 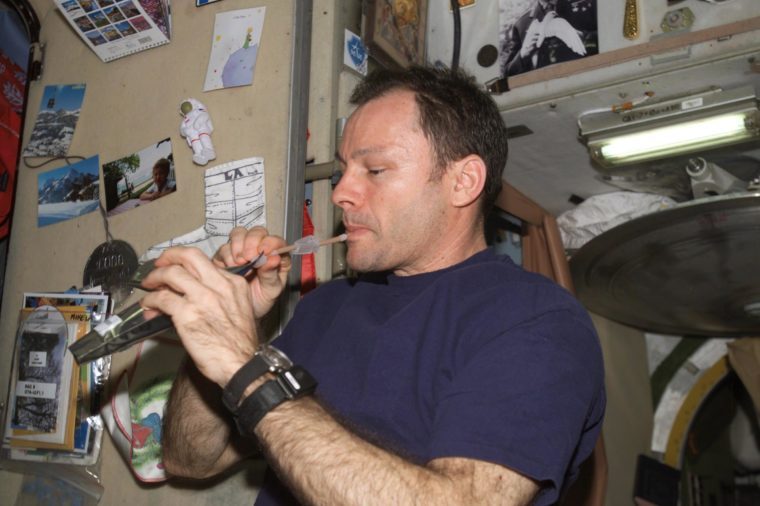 Raspberries and rum in space

OK, you can’t actually go raspberry picking in space—yet. But, as it turns out, the main component that gives raspberries their distinctive flavor, ethyl formate, was discovered in the Milky Way in 2009. Ethyl formate is also a component of rum, but it’s also unlikely you’ll be able to order a rum and coke in the galaxy any time soon—especially since alcohol is one of the foods that are banned from space. 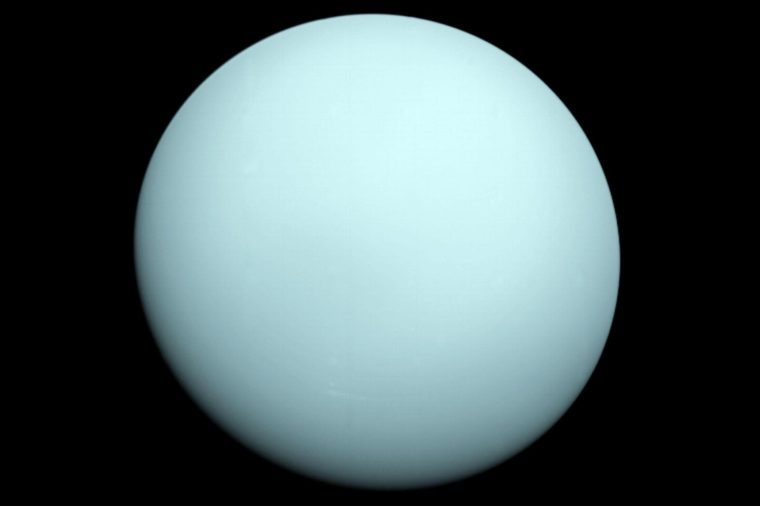 As the only planet that rotates on its side, Uranus has scientists baffled. Some theories include that the planet may have been altered at some point by a titanic collision, says space.com. Either way, it’s the oddball in planet rotations. 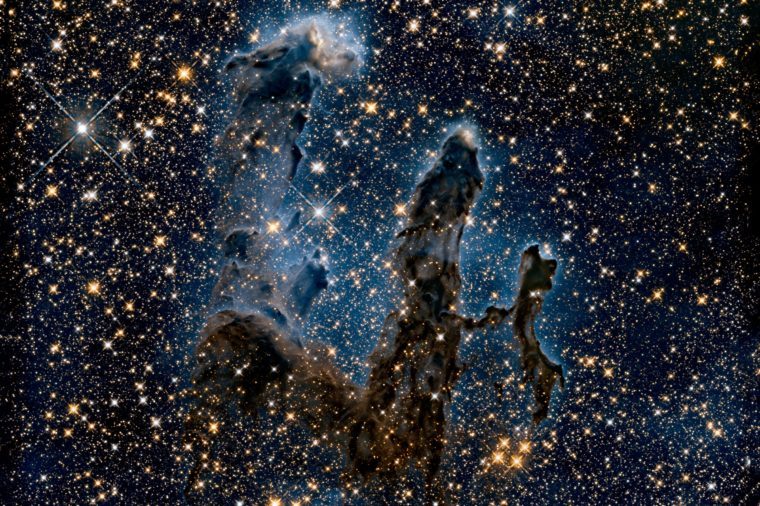 Since stars are so far away and their light takes so long to reach Earth, it’s possible the star you’re looking at is already dead. A good example is the Pillars of Creation, which are part of a region called the Eagle Nebula that’s 7000 light-years away from us. These pillar-like clouds of dust and gas were first imaged by the Hubble Telescope in 1995—but they were actually destroyed at least 6000 years ago by a supernova. What we’re seeing in Hubble’s 1995 image is what the Pillars of Creation looked like 7000 years ago. The good news: Those “already dead” stars are rare, so the majority of the stars in the sky are “still there and will be for some time,” says astronomer Phil Plait. 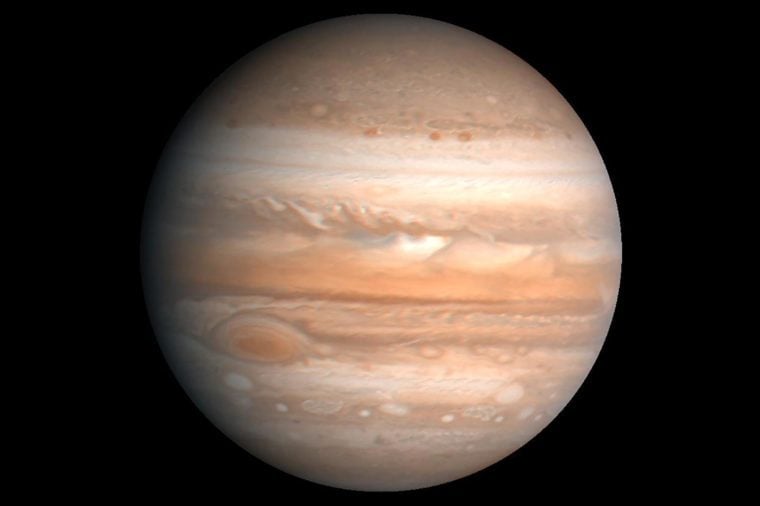 If you’re, say, 140 pounds, did you know you would be about 53 pounds on Mercury? Without getting caught up in complicated math, the reason behind the swift weight change is the planet’s gravitational field. As LiveScience explains, “your mass remains constant across the universe, while your weight changes depending on the gravitational forces acting on you, which vary from planet to planet.” Since Mercury’s gravitational field is less than Earth’s, you’d weigh less. If the gravitational field is more than the Earth’s, you’d, of course, weigh more. (Word to the wise: Avoid Jupiter, because it triples your weight!) These are the most baffling mysteries about the universe. 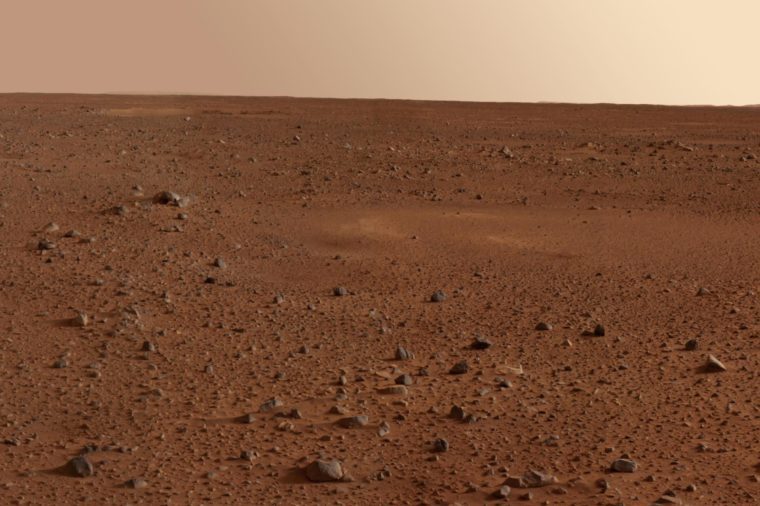 You don’t have to go all the ways to Mars to get a souvenir from space. When meteorites were tested on Earth from the Sahara Desert and Antarctica, it was revealed that some rocks come from Mars. 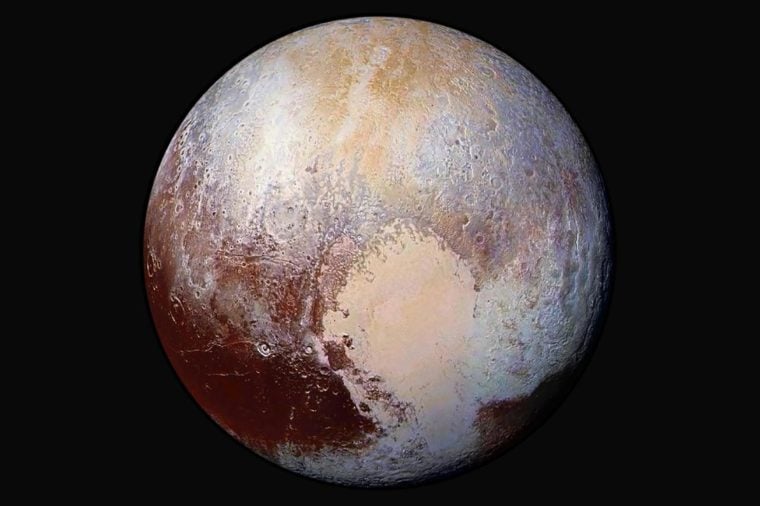 Pluto was unceremoniously kicked off the team of full-sized planets we consider part of our solar system. (The rest of them are, of course, Mars, Venus, Earth, Mercury, Jupiter, Saturn, Uranus, and Neptune.) “The International Astronomical Union reclassified poor Pluto as a dwarf planet in 2006—a move that lots of people described as a demotion,” reports The Atlantic. Pluto is half the width of the United States and way smaller than any of the other planets sharing the same status in the solar system. Pluto being a planet is just one of many facts you learned in school that are no longer true. 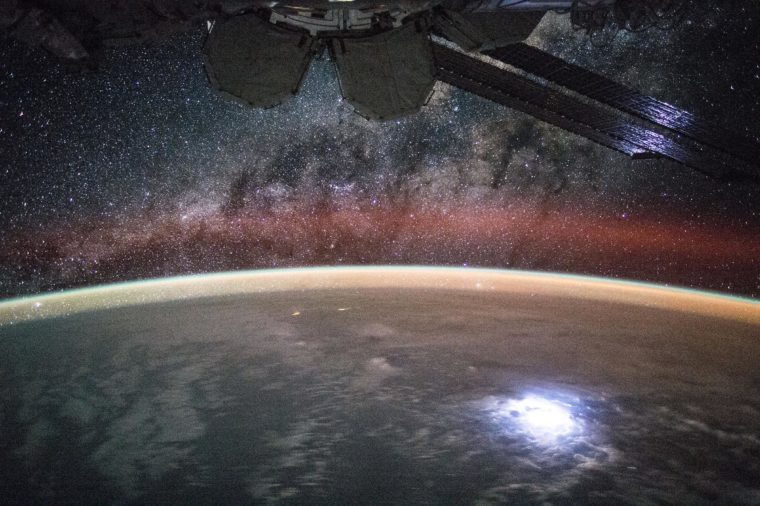 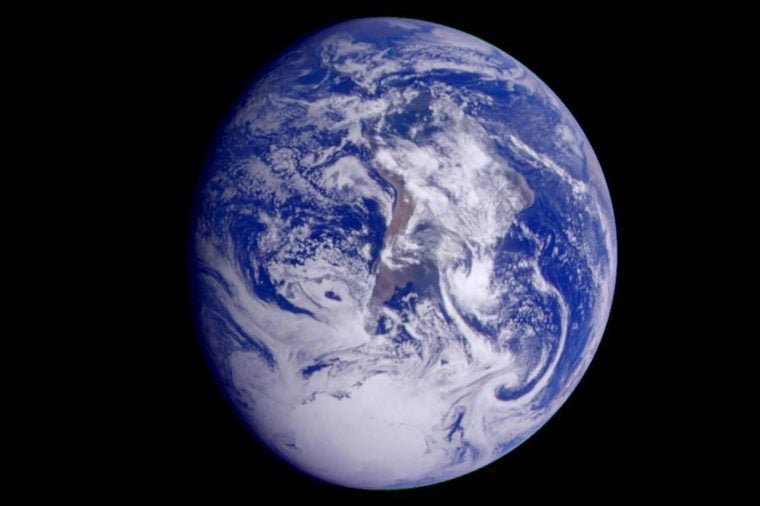 Earth is slowing down 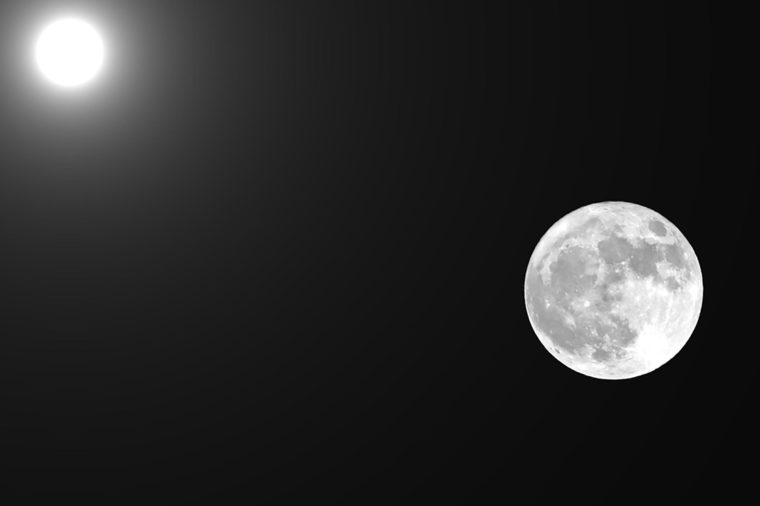 The sun and moon may look fairly similar in size when you look at the sky, but don’t let your eyes fool you. Not only does the sun actually dwarf the moon in size—it’s 400 times larger—it’s also 400 times further away from Earth than the moon. That distance gives the sun the illusion of appearing moon-size. We know why this is, but scientists are still working out these unanswered questions about the moon. 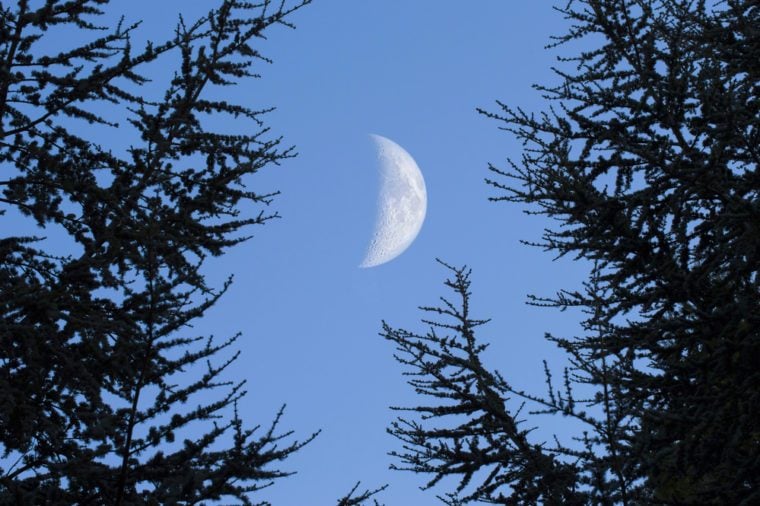 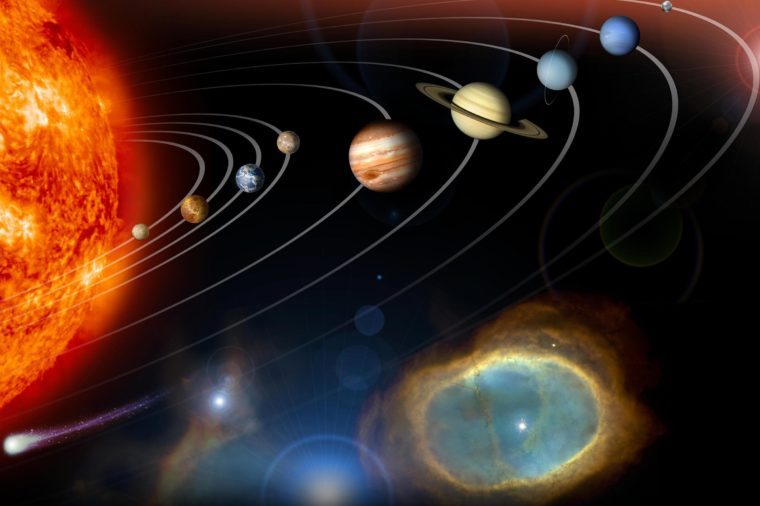 If a map of the solar system was created to scale, it would be way too big to hang. Using a single pixel to represent the moon, designer and developer Josh Worth created what he calls “a tediously accurate scale model of the solar system.” You’re probably better off going with the textbook version that makes the planets appear a wee bit closer if you want something to hang on your wall. Now that you know the truth about solar system maps, find out 18 other science facts you weren’t taught in school. 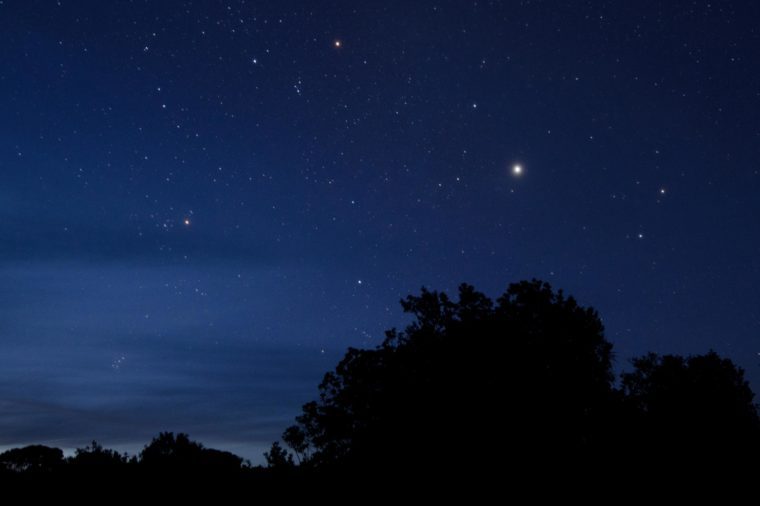 Polaris, our North Star, isn’t leaving us anytime soon—at least not for another 12,000 years. But when it does, the star Vega will replace it. Why? It’s all about the rotation of the Earth, says space.com. As our planet’s axis changes over a very long 26,000-year cycle, the north eventually shifts to different stars. It won’t be the first time Vega gets the starring role in our night sky; it was the North Star several thousand years ago. 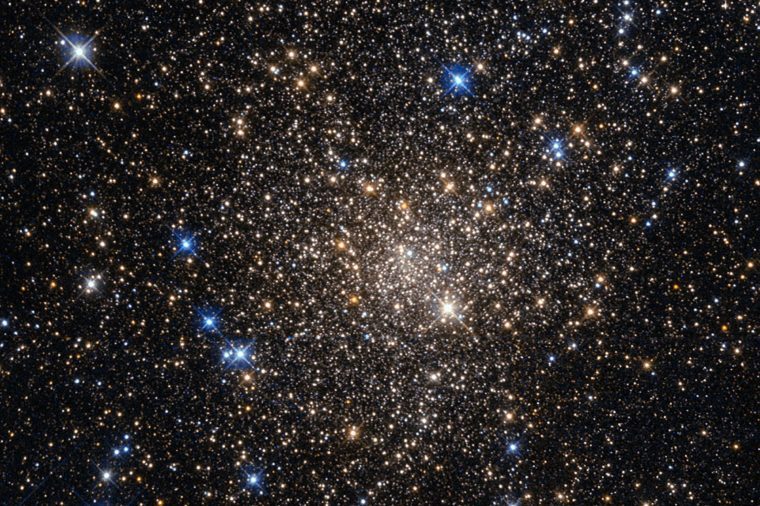 Peace and quiet are out of this world

If you need some time to chill out and ditch all the noise on Earth, you might want to go for a spacewalk. That’s because we typically can’t hear sound in space. Sound travels by making molecules vibrate, but in space, there are only five protons in the same volume (a square centimeter of air) that you would find nearly 300,000,000,000,000,000,000 molecules in here on Earth. You would need “an eardrum comparable to the size of Earth” to hear the small pressure variations of the magnetosonic waves that you’d find in space, according to Newsweek. Don’t miss these science mysteries no one has figured out.

A black hole can actually suck up a star and burp it back out. Sound gross? Sciencealert.com explains that when a star gets sucked up into a black hole, it will release a huge jet of plasma. This “burp” can span hundreds of light-years. “When the star is ripped apart by the gravitational forces of the black hole, some part of the star’s remains falls into the black hole, while the rest is ejected at high speeds,” notes Suvi Gezari, a researcher at Johns Hopkins University, to sciencealert.com. 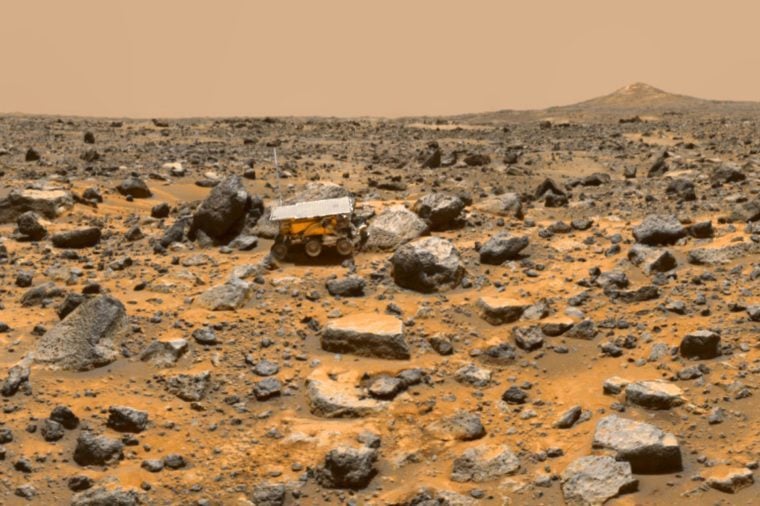 Mars is a bit rusty

Although there isn’t any water on Mars, it’s rusty red on its surface and so is its sky. Earth rust is made from iron and water, and one theory about the iron oxide on Mars is that it probably formed many eons ago, when there may have been water on the planet. The planet remains very rich in iron oxide. 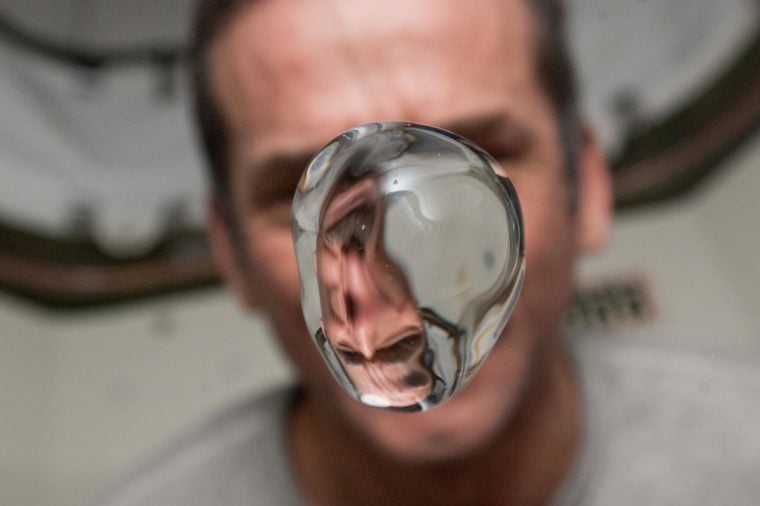 Even your tears won’t fall

Whether it’s tears or plain old water, the weightless atmosphere in space causes liquid to adhere to a surface rather than fall. When it comes to tears, they’ll just form bubbles around your eyes. Learn some more unbelievable but true facts about space travel. 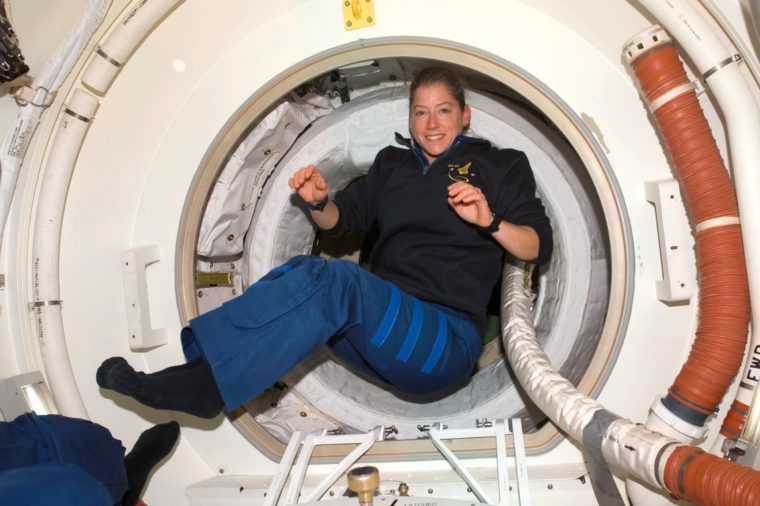 Keep those socks on in space

Astronauts don’t spend a lot of time on their feet while they’re floating around in the weightless environment of space. This might give their tootsies a nice break, but it also causes the skin on their feet to soften and flake. Astronauts don’t change their underwear and socks frequently as they can’t do loads of laundry like at home. So watch out when they do—the sloughed-off skin can be released with each sock and end up floating about. 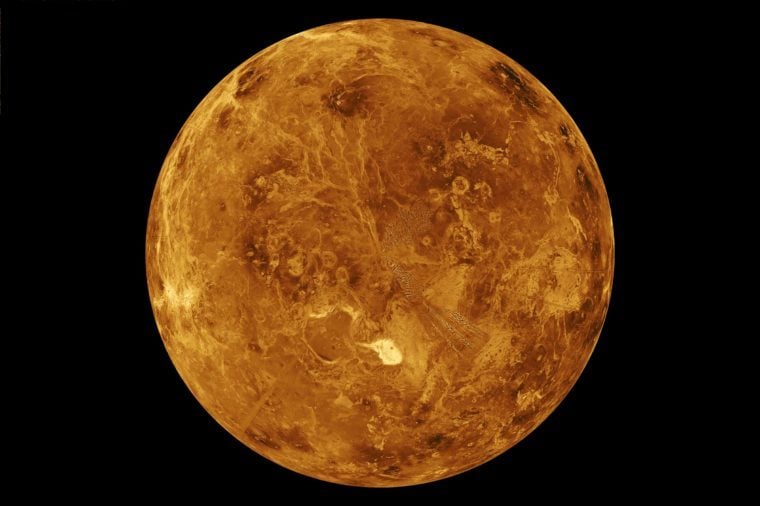 A planet with a reputation for an atmosphere five times hotter than boiling water, Venus has a cold spot, too. Although the average temp is hot, hot, hot, there’s a cold layer hidden in its atmosphere with temperatures of -175 °C and possibly carbon dioxide ice. “The cold layer is unique, in that Earth and Mars don’t have anything like it,” said Håkan Svedhem, ESA’s Venus Express project scientist, in a press release. 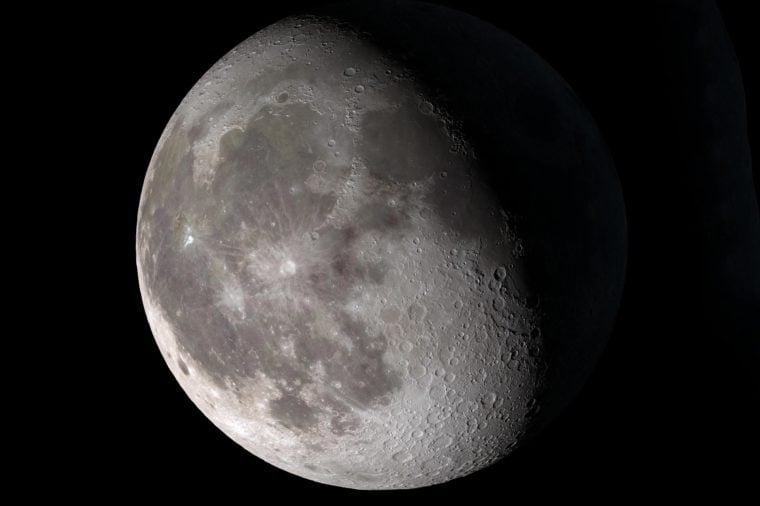 A new study has found that the moon might one day be a space resource for water, as it contains a lot more H2O than previously thought. Scientists conclude we could extract water from pyroclastic deposits, a substance on the moon made mostly of volcanic glass beads formed during ancient explosive eruptions. Now that you know all these astronomy facts, see how you fare with these science trivia questions everyone gets wrong.