25 of the Hardest Riddles Ever. Can You Solve Them?

Who doesn't love brain teasers and challenging riddles? If you think you’re already a pro at solving tricky riddles, put yourself to the test with these and find out! (Don't worry, answers are included.) 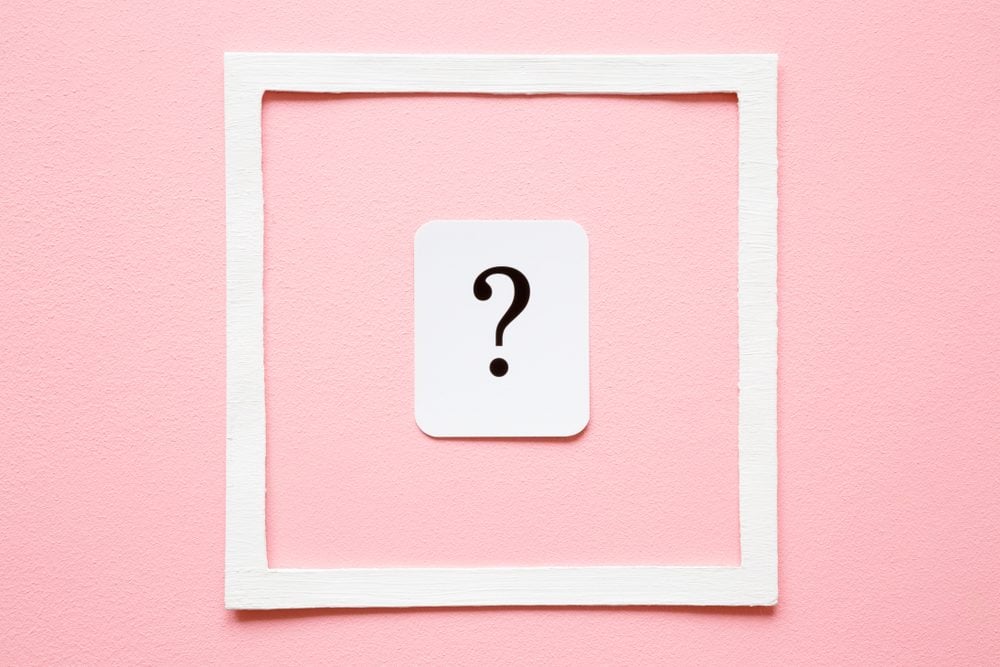 Ready to be riddled?

Riddles run the gamut from simple and easy to solve to serious brain-busters—and we’ve compiled several of the latter for your riddling enjoyment. The major head-scratchers in this list might take some big time brain power to solve—but it sure feels great when you figure one out! And if you’re stumped, check out our 25 favorite riddles for kids instead. 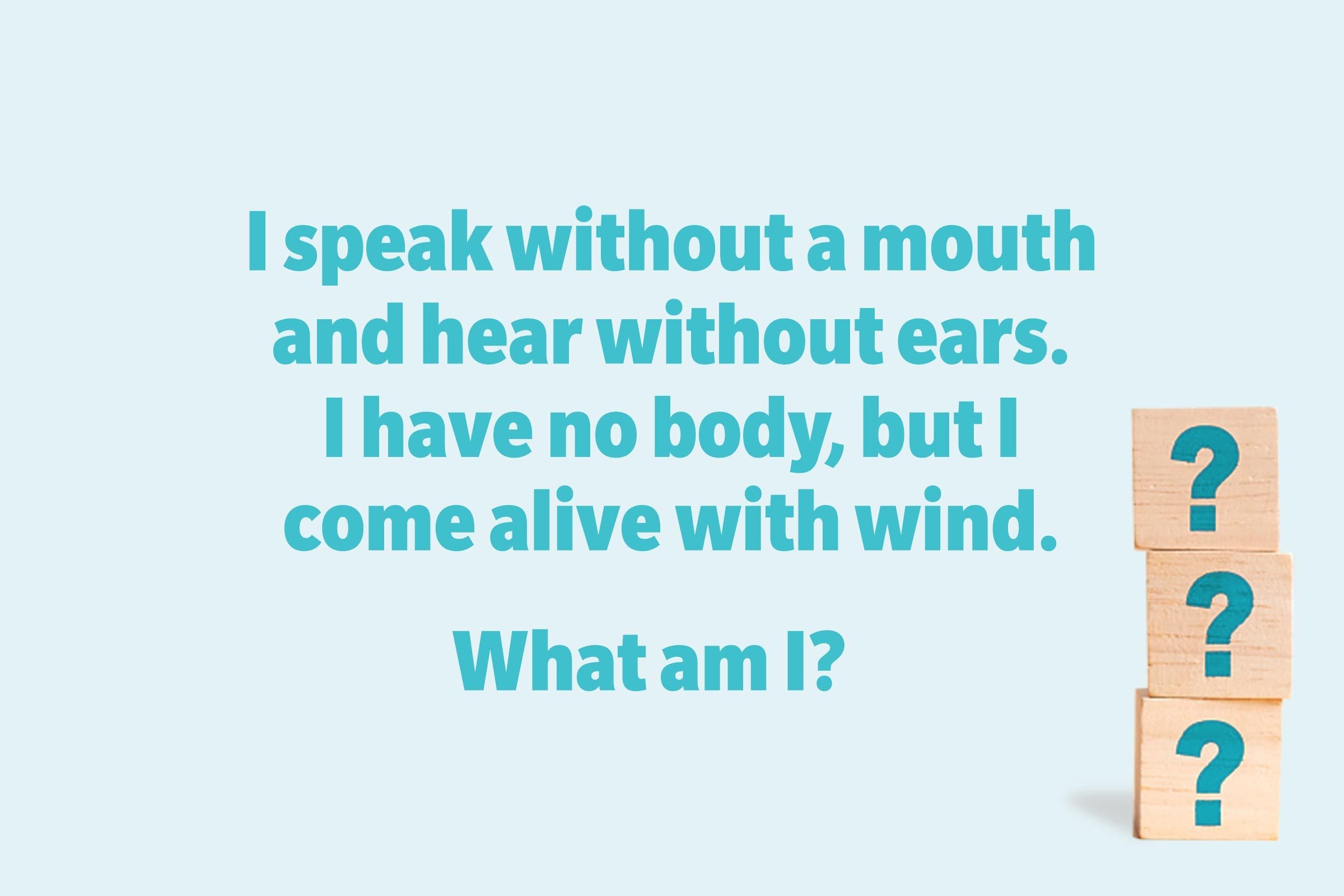 I speak without a mouth and hear without ears. I have no body, but I come alive with wind. What am I?

This riddle relies on tricking you into thinking about ears and a mouth. You get a tiny hint about wind to encourage you to think broadly and avoid the literal.

Answer: An echo. If you have an observant eye, try solving these tricky rebus puzzles. 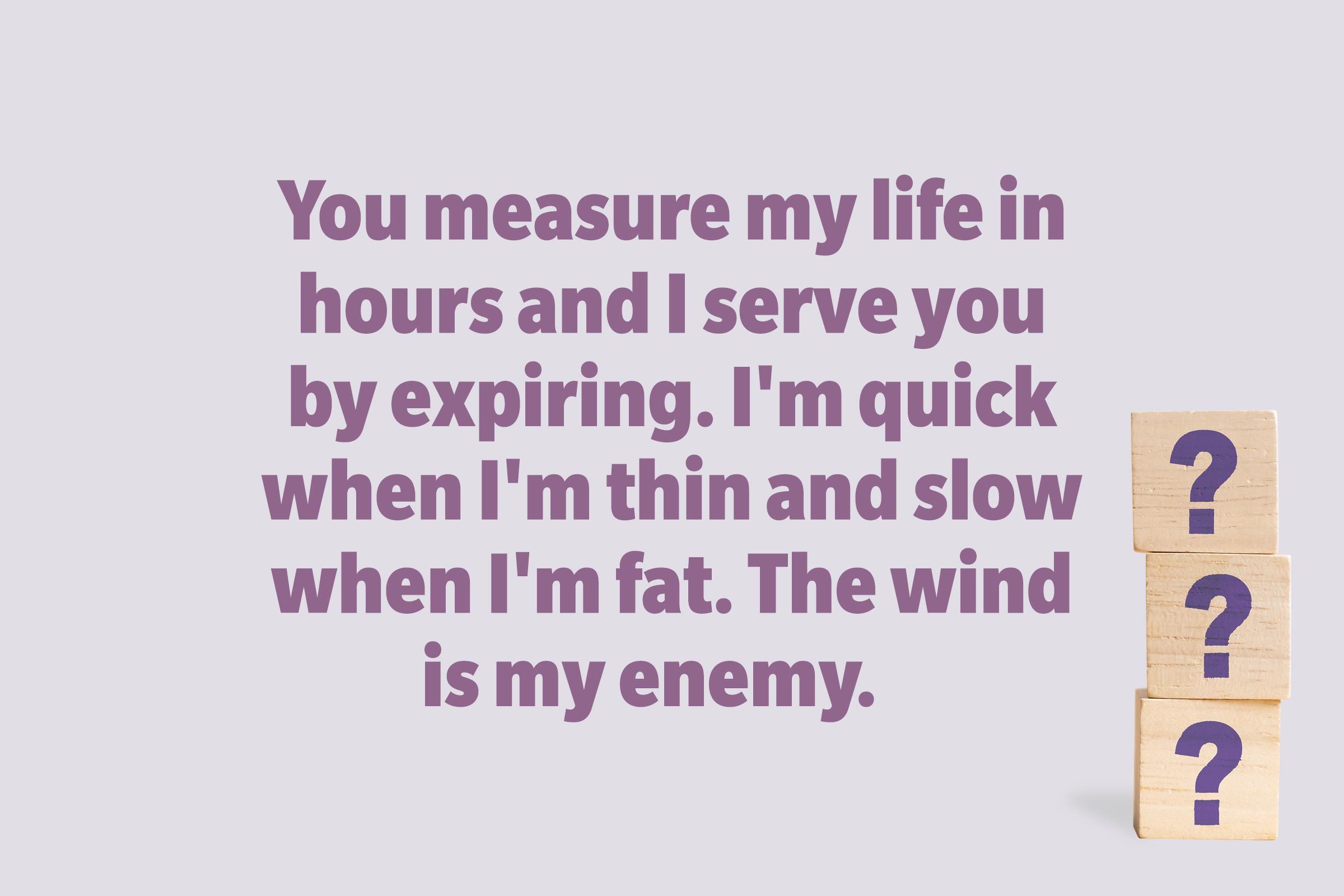 You measure my life in hours and I serve you by expiring. I’m quick when I’m thin and slow when I’m fat. The wind is my enemy.

Hard riddles want to trip you up, and this one works by hitting you with details from every angle. The big hint comes at the end with the wind. What does wind threaten most? You have to stretch your brain to come up with a something tiny and unexpected.

Answer: A candle. Plus, check out some simple riddles (with answers) that aren’t too challenging to solve. 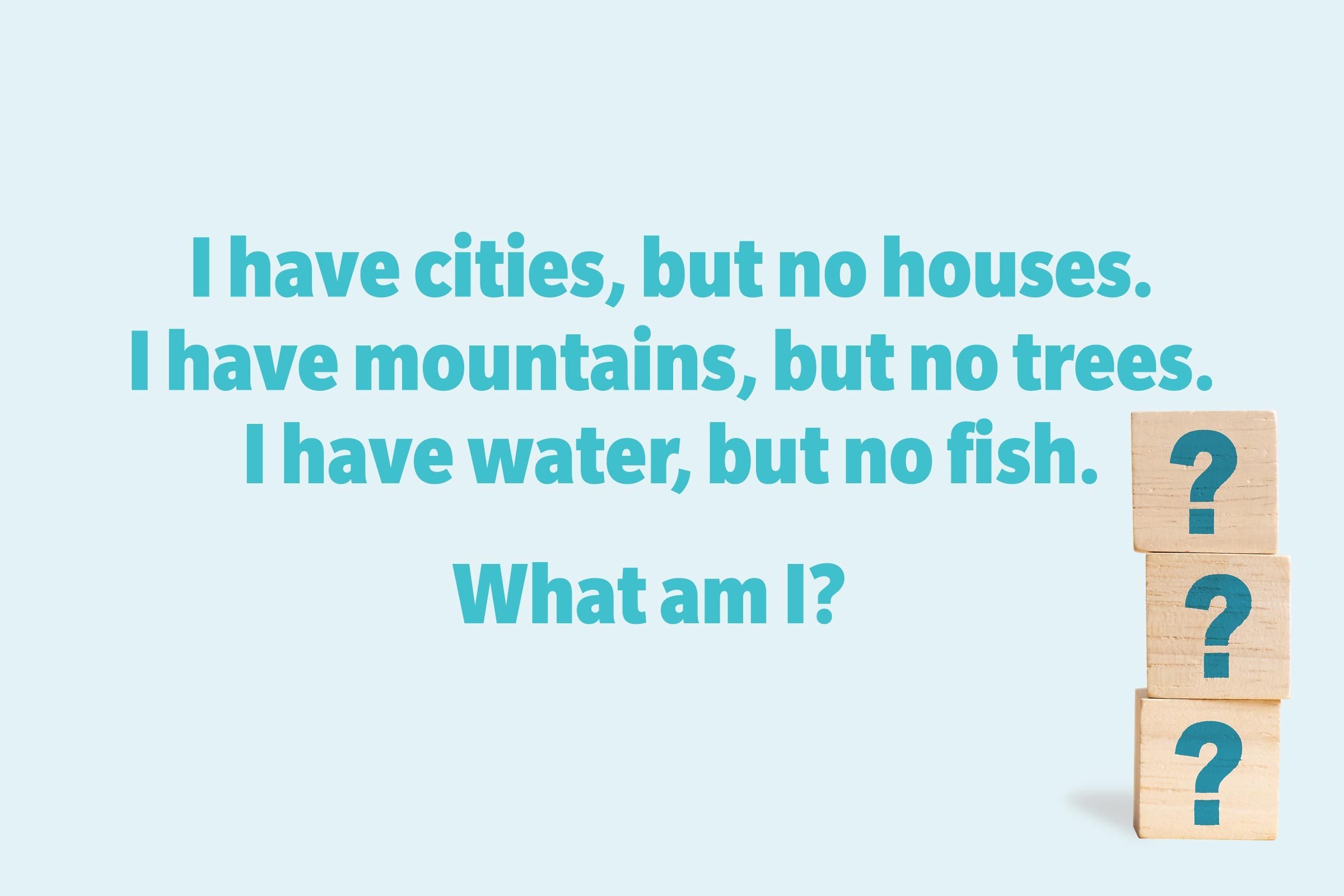 I have cities, but no houses. I have mountains, but no trees. I have water, but no fish. What am I?

This riddle aims to confuse you and get you to focus on the things that are missing: the houses, trees, and fish. You might guess you need to think about something inanimate. 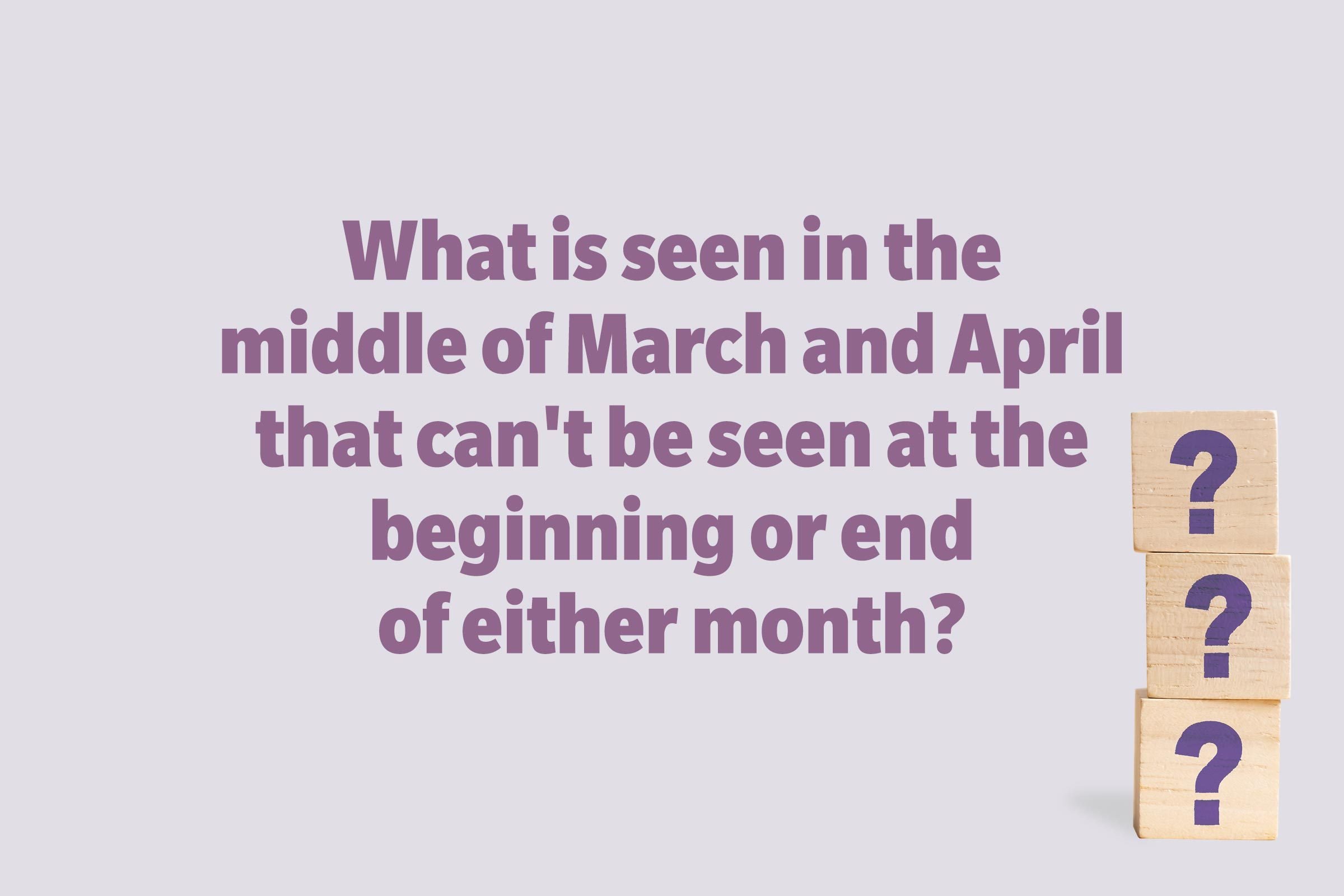 What is seen in the middle of March and April that can’t be seen at the beginning or end of either month?

This riddle works by trying to get you to think about the weather or holidays or other events linked to a calendar. To get this one right you actually need to get super literal.

Answer: The letter “R.” Like wordy riddles like these? Try out these challenging word puzzles that will leave you stumped. 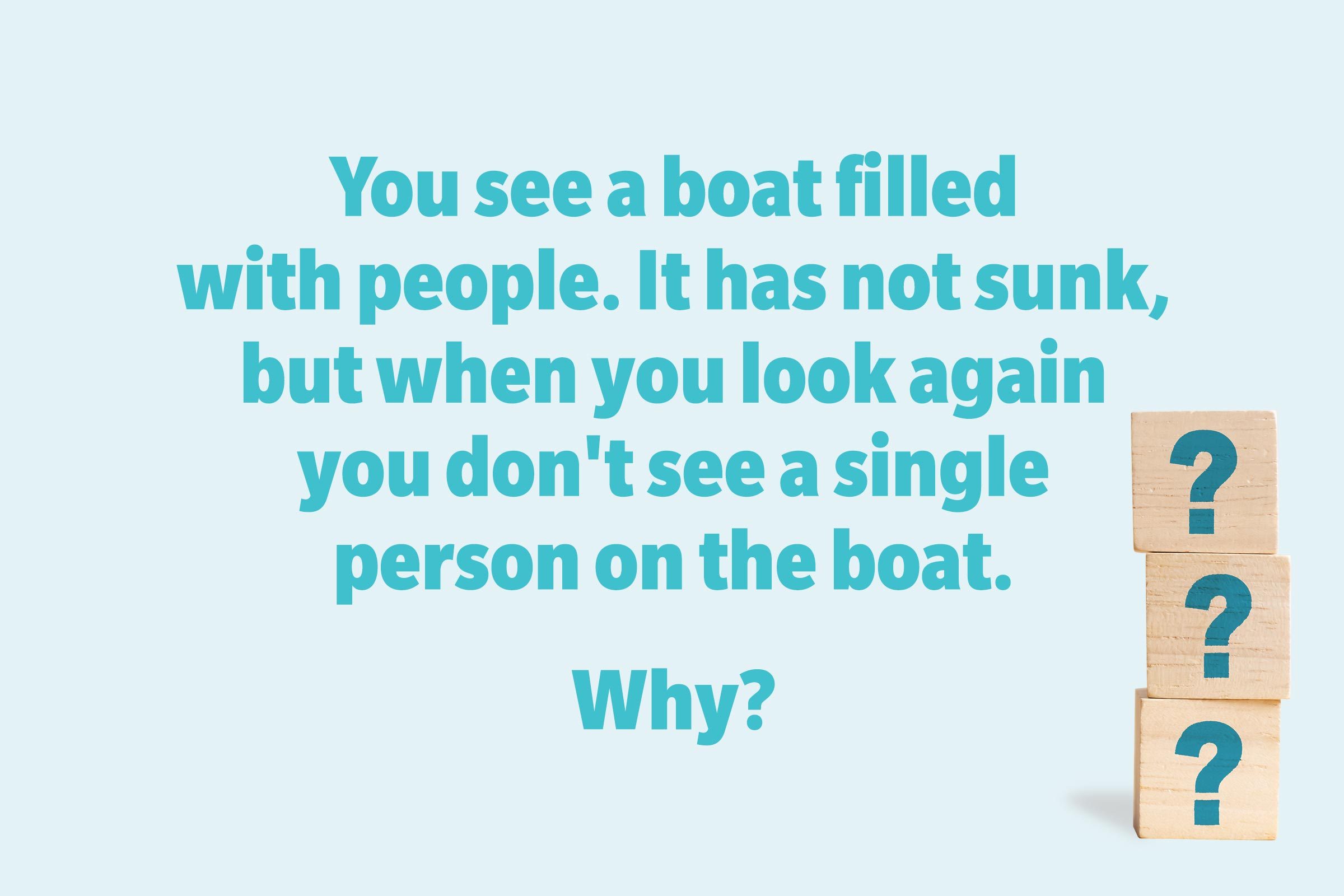 You see a boat filled with people. It has not sunk, but when you look again you don’t see a single person on the boat. Why?

Hard riddles like this brainteaser are tricky because they seems to invite straightforward, logical thinking. You may come up with answers like “they all went below deck” or “jumped overboard.” But you need to focus on the word “single” and think about its other meanings.

Answer: All the people were married. Can you solve these tricky shadow puzzles? 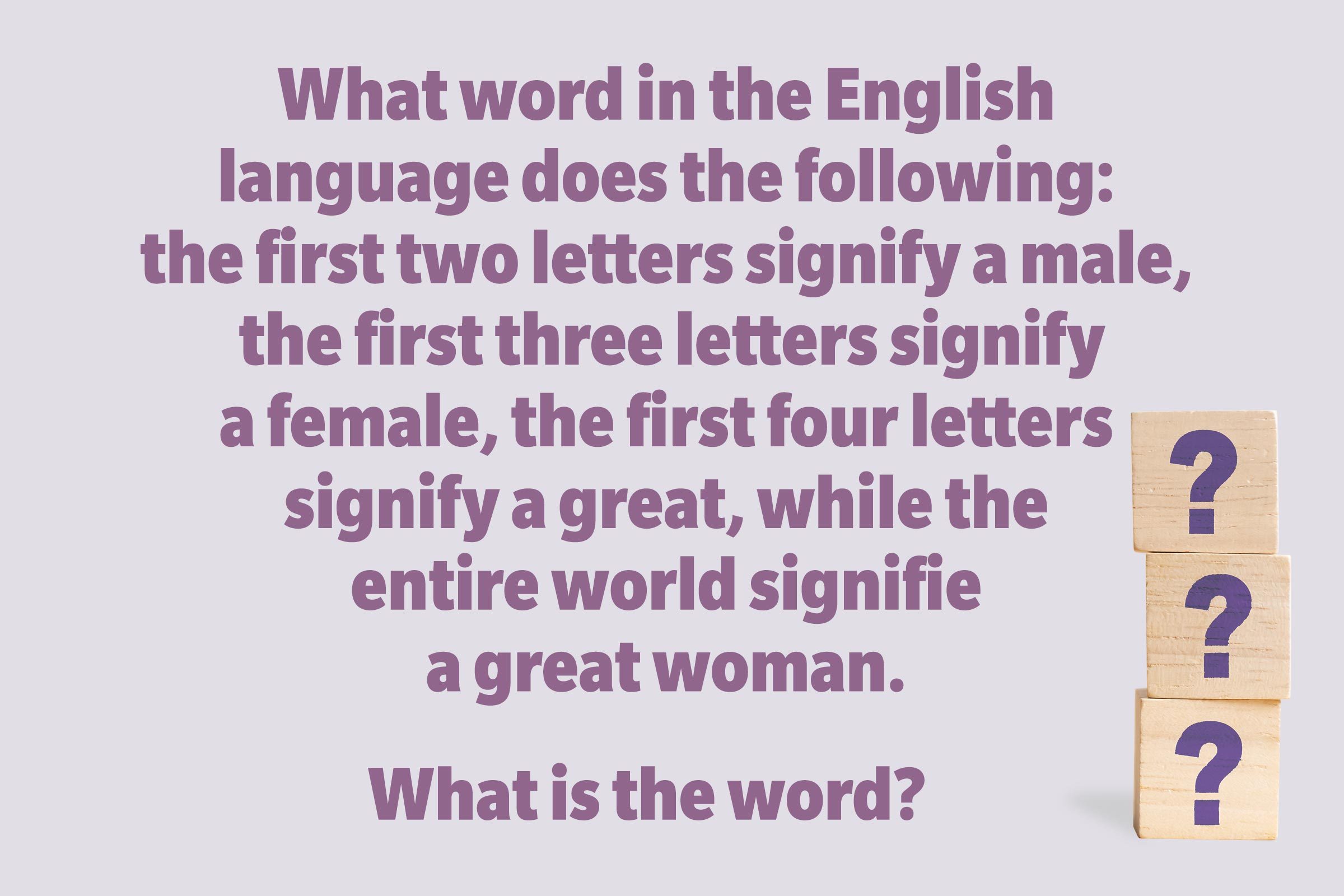 This is hard because it gets you thinking about gender and the ways they’re different. You have to think of one word that holds the others. It’s easy when you think about it! 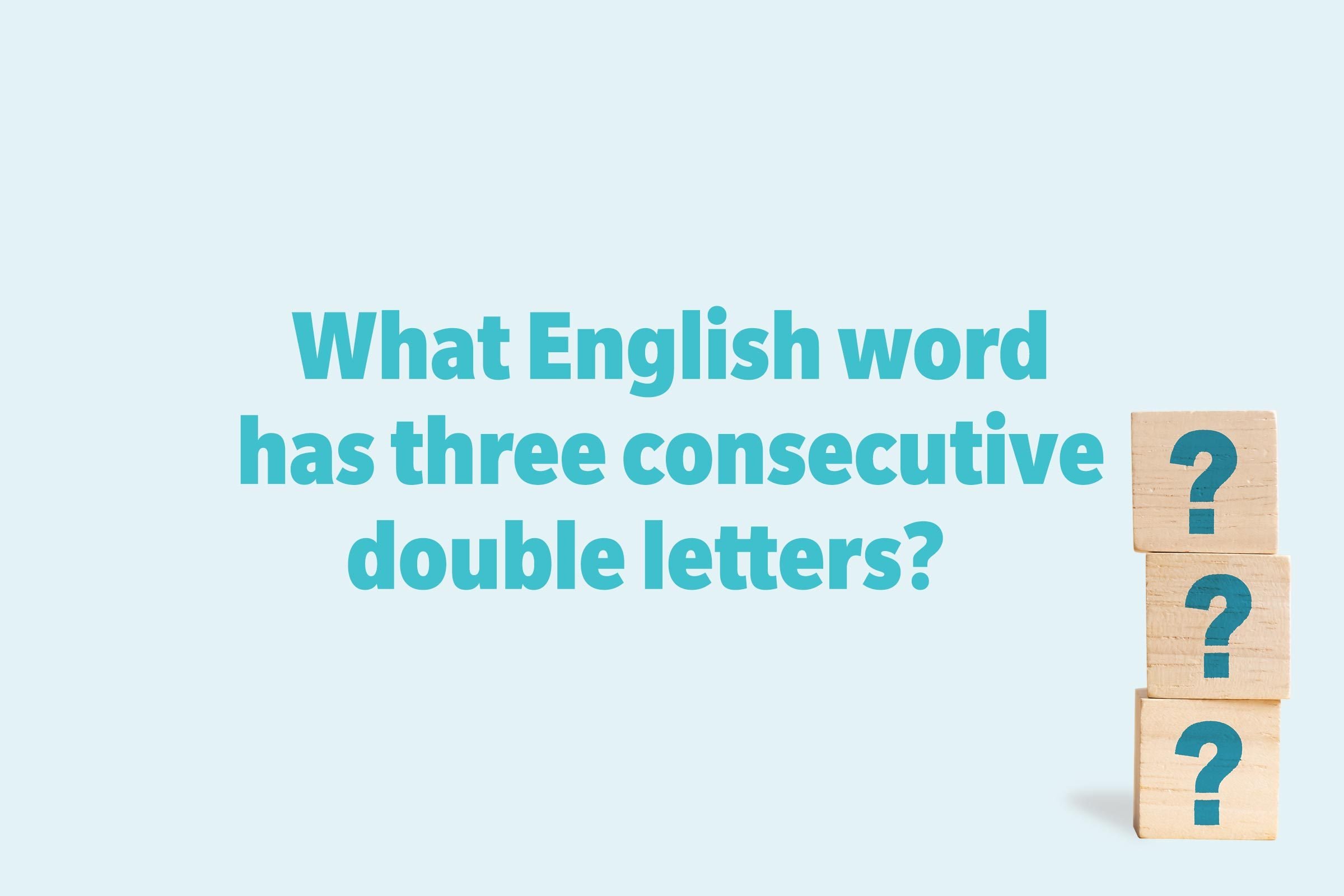 This one is pretty impossible, but use the facts you know about English to get on track. First, think of words with double vowels. And you must know this is probably going to be a compound word. The first and last letters of those combined words will form one set of double letters. Now, just wrack your brain!

Answer: Bookkeeper. For another tricky word test, see if you can figure out if these funny-sounding words are real or made up. 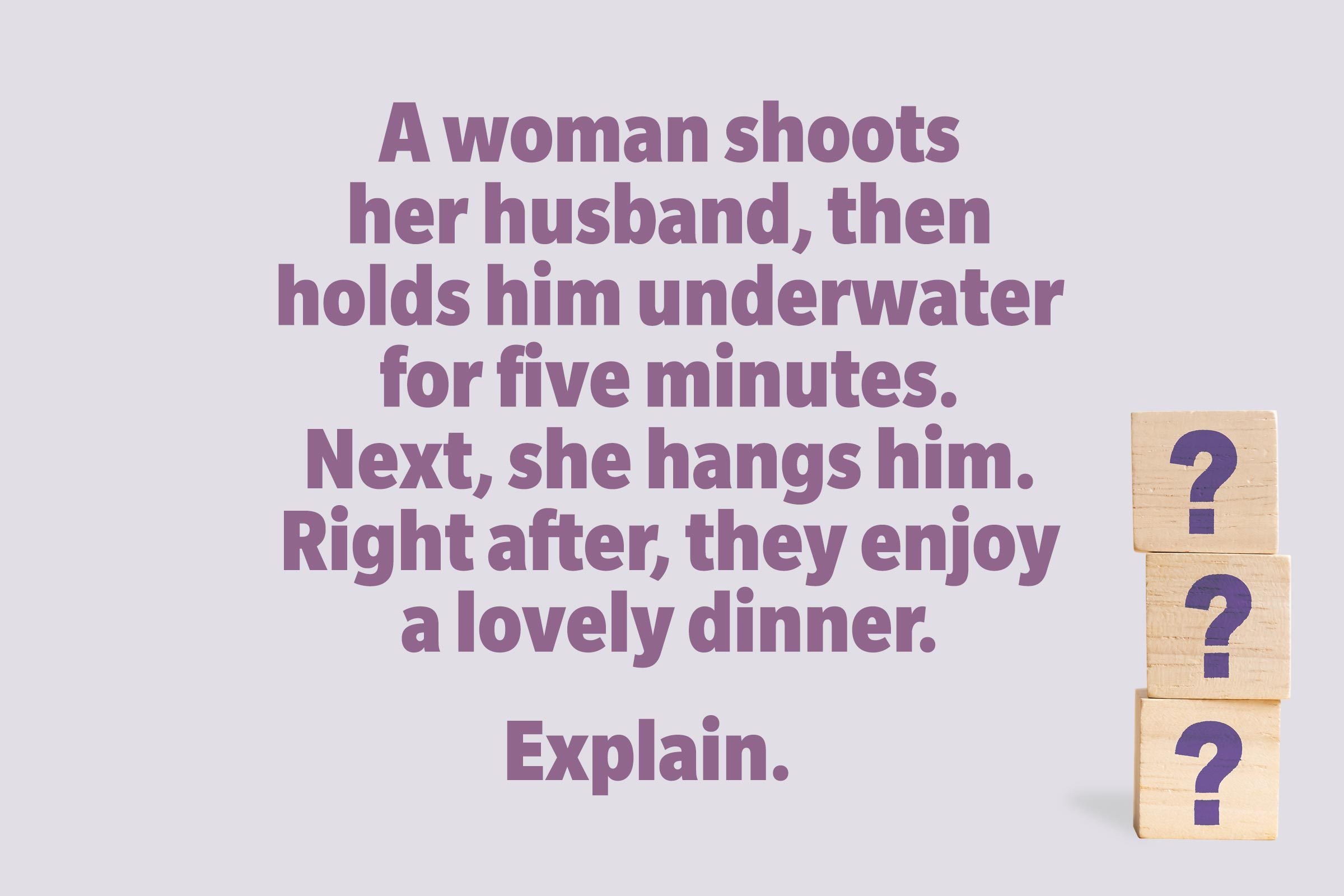 A woman shoots her husband, then holds him underwater for five minutes. Next, she hangs him. Right after, they enjoy a lovely dinner. Explain.

This puzzle aims to throw you off balance with shock. But pay attention to the first verb, “shoots.” What else can you shoot with besides a gun? There lies the key to the whole thing.

Answer: She took a picture of him and developed it in her dark room. Can you find the missing number in this puzzle? 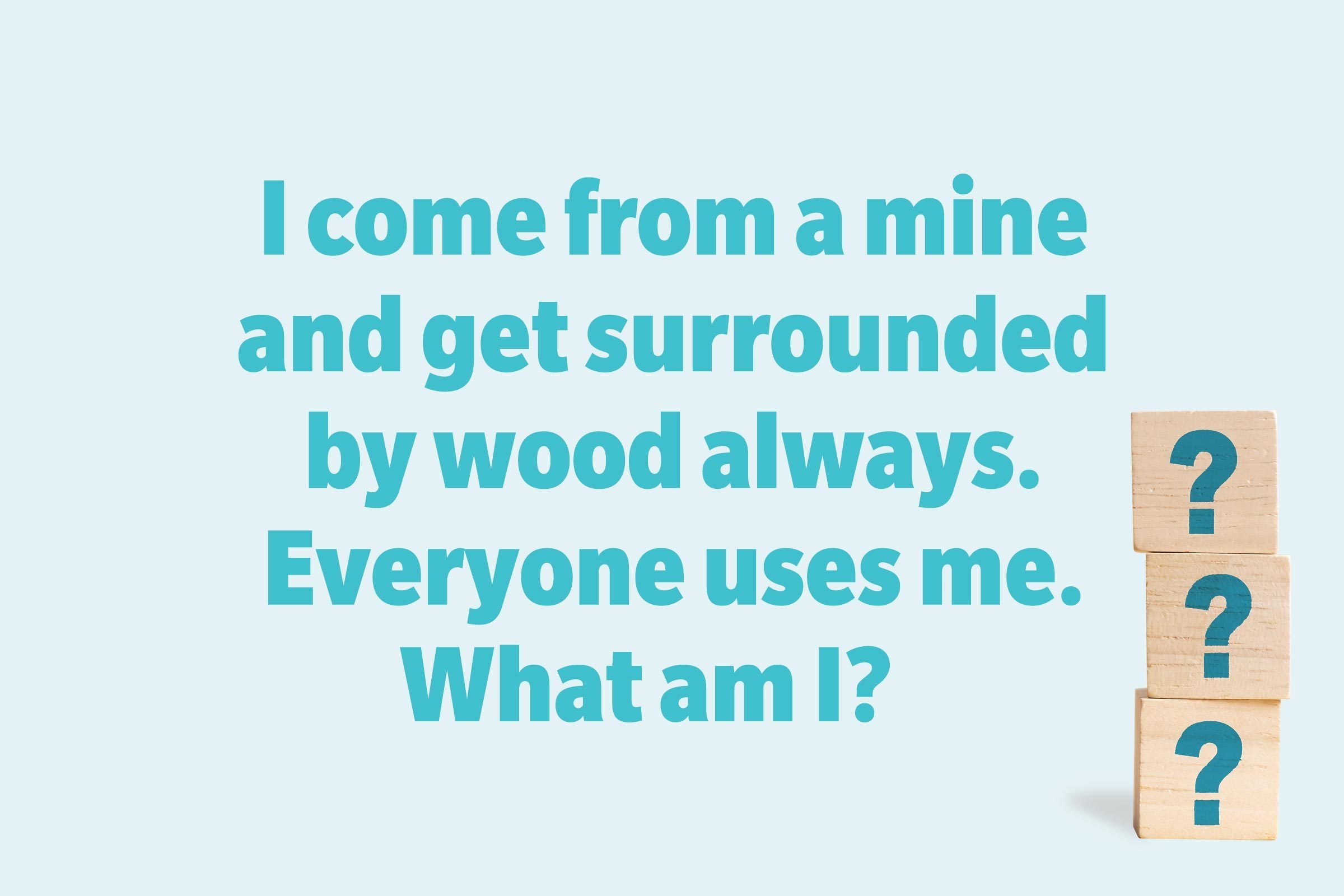 I come from a mine and get surrounded by wood always. Everyone uses me. What am I? 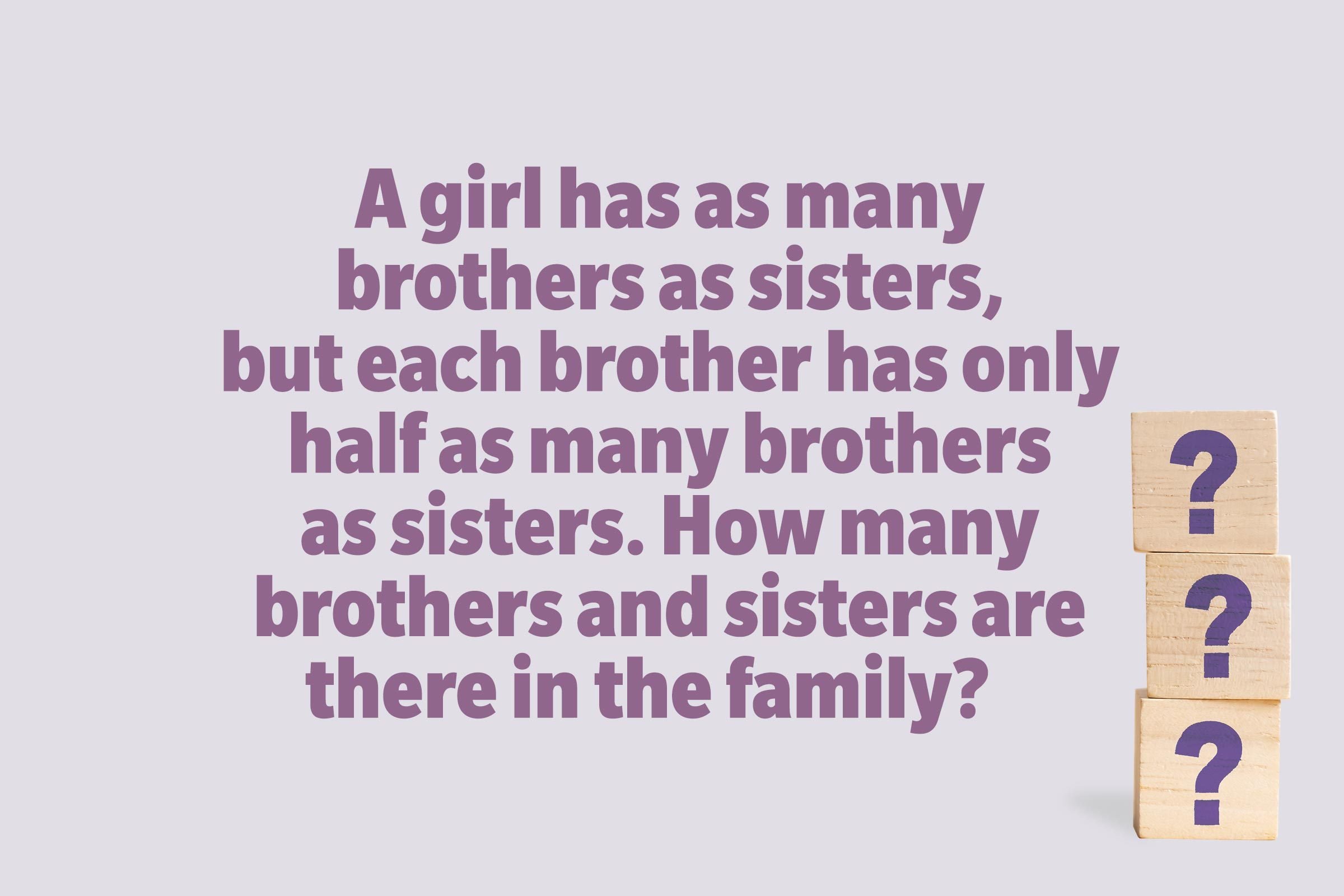 This trick question gives you a bunch of ways to get totally confused if you try to figure out the answer. The key is to keep it simple. Be sure to count the sisters and brothers in total and in terms of their own number of siblings. Then the answer gets a little easier.

Answer: Four sisters and three brothers. Yeah, this one had a little math involved! If it was no sweat, try out these other math riddles only the smartest can get right. 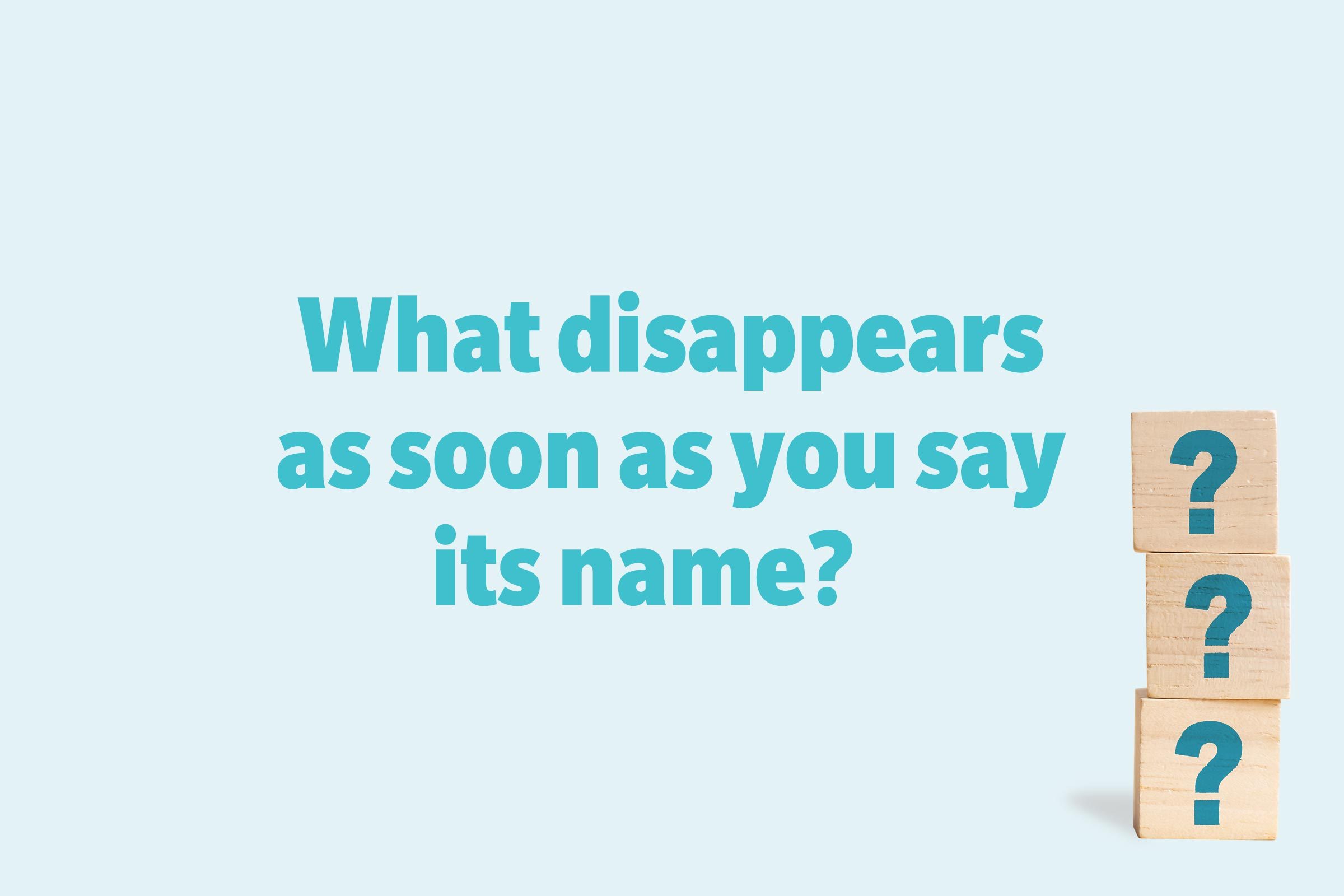 What disappears as soon as you say its name?

Hard riddles like this one require you to think logically or in a straightforward way. At the same time, it’s employing a conceptual metaphor with the notion of something disappearing. The answer seems so simple—but not until you’ve figured it out! Before that moment, it’s got your brain in a twist. 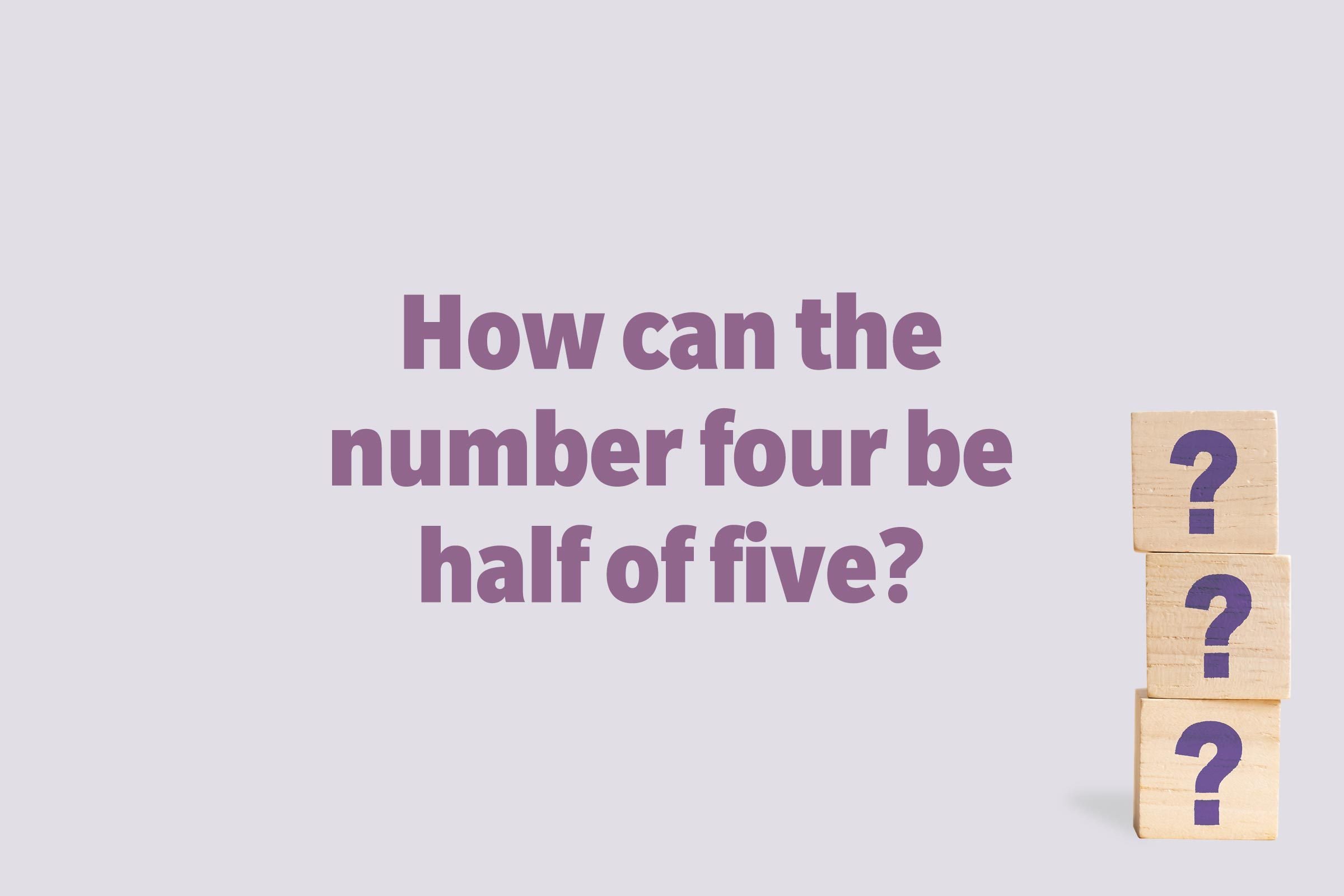 How can the number four be half of five?

You might start doing some elaborate fractions but hard riddles like this are sometimes much more about word play than crunching the numbers. Think literally and the answer may just appear right before your eyes.

Answer: IV, the Roman numeral for four, which is “half” (two letters) of the word five. Take this quiz to see if you’re a genius. 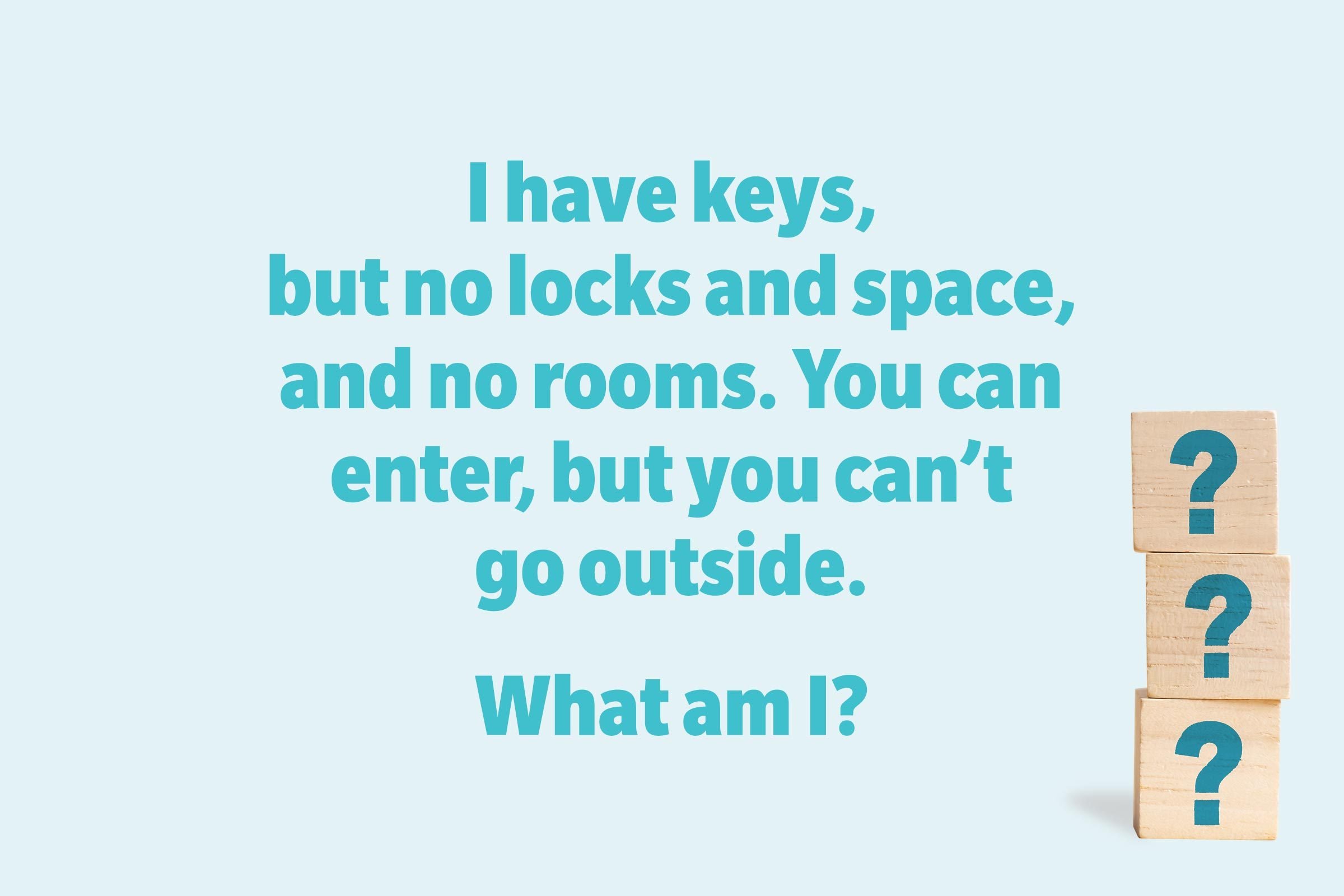 I have keys, but no locks and space, and no rooms. You can enter, but you can’t go outside. What am I?

This one tricks you by having you think about space that can be entered. Then it gets you to merge that with a space without rooms where you can’t leave. You might even be hung up on those keys. That’s where you should linger. Think about that word. What are some other meanings of “keys”—especially that don’t require locks? 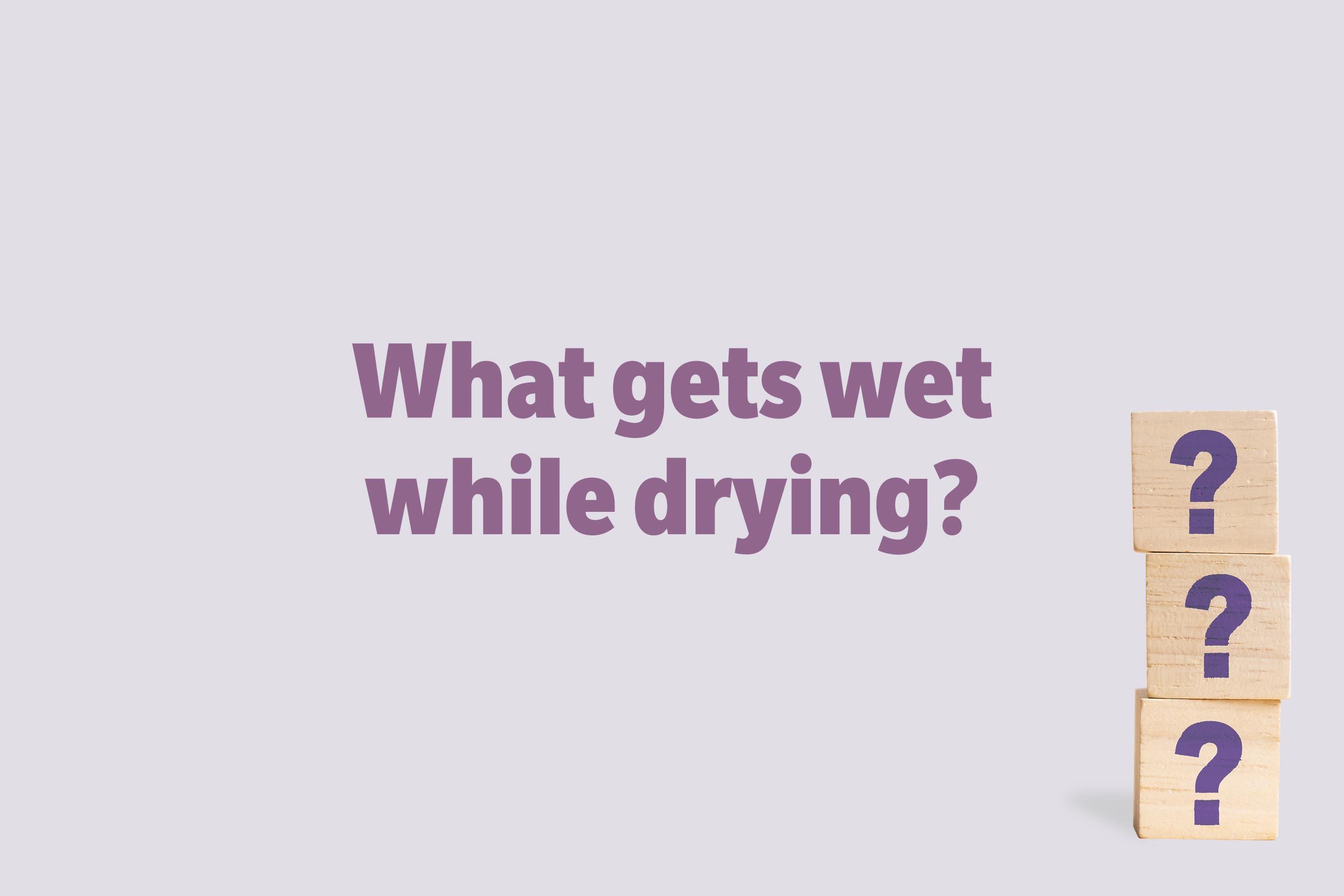 What gets wet while drying?

This one has a simple answer even though it stumps most people who try to figure it out. Wet and dry seem like they always have to be opposite, so you might get tripped up. Think of an object that can, ahem (hint!) absorb or be both.

Answer: A towel. Can you guess these animals based on their footprints? 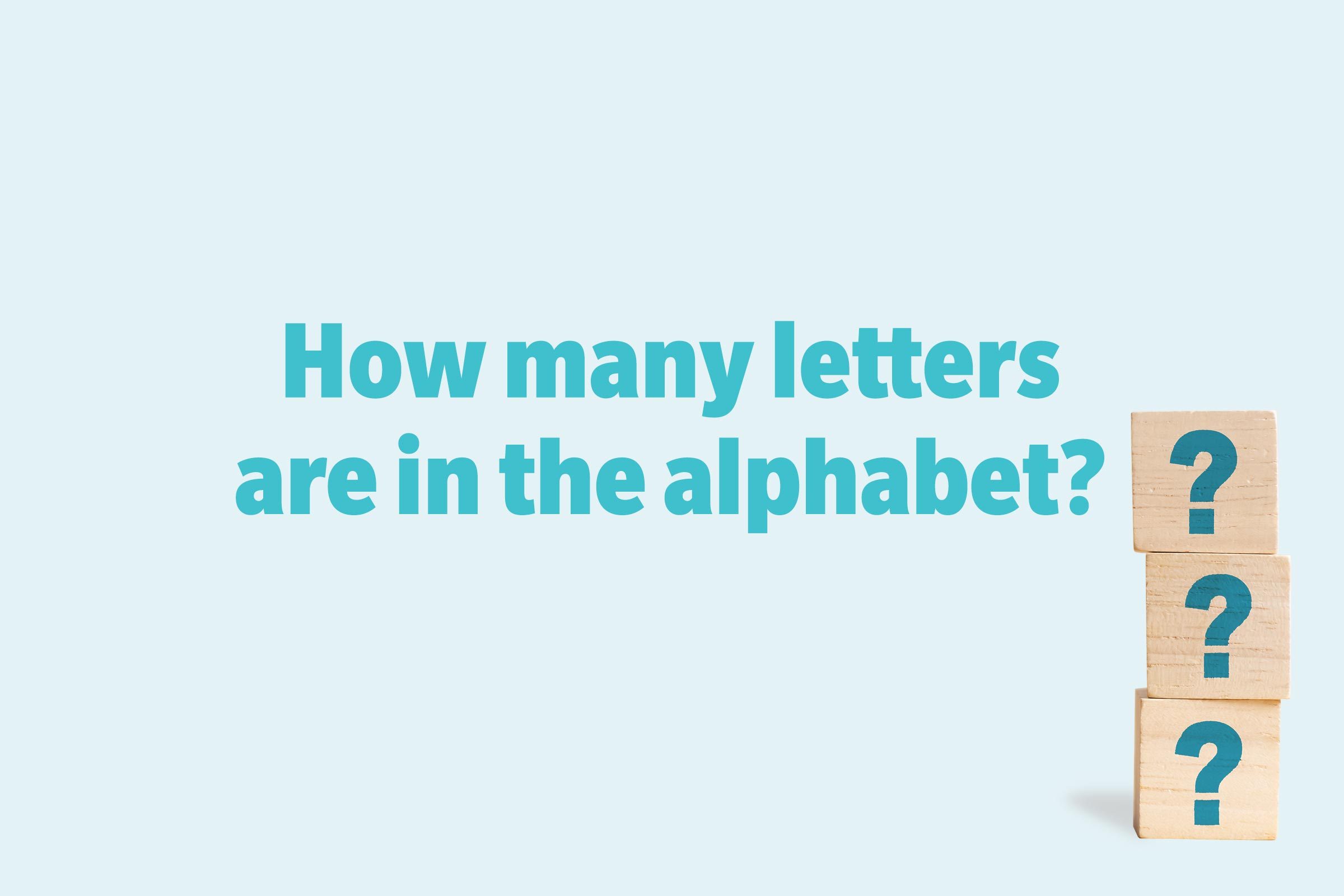 How many letters are in the alphabet?

Some hard riddles trip you up by sending you to the easiest answer first. You got this one easy, right? Twenty-six—if you’re talking English alphabet. Not so fast. Take another look and get super simple and straightforward.

Answer: There are 11 letters in the words “the alphabet” 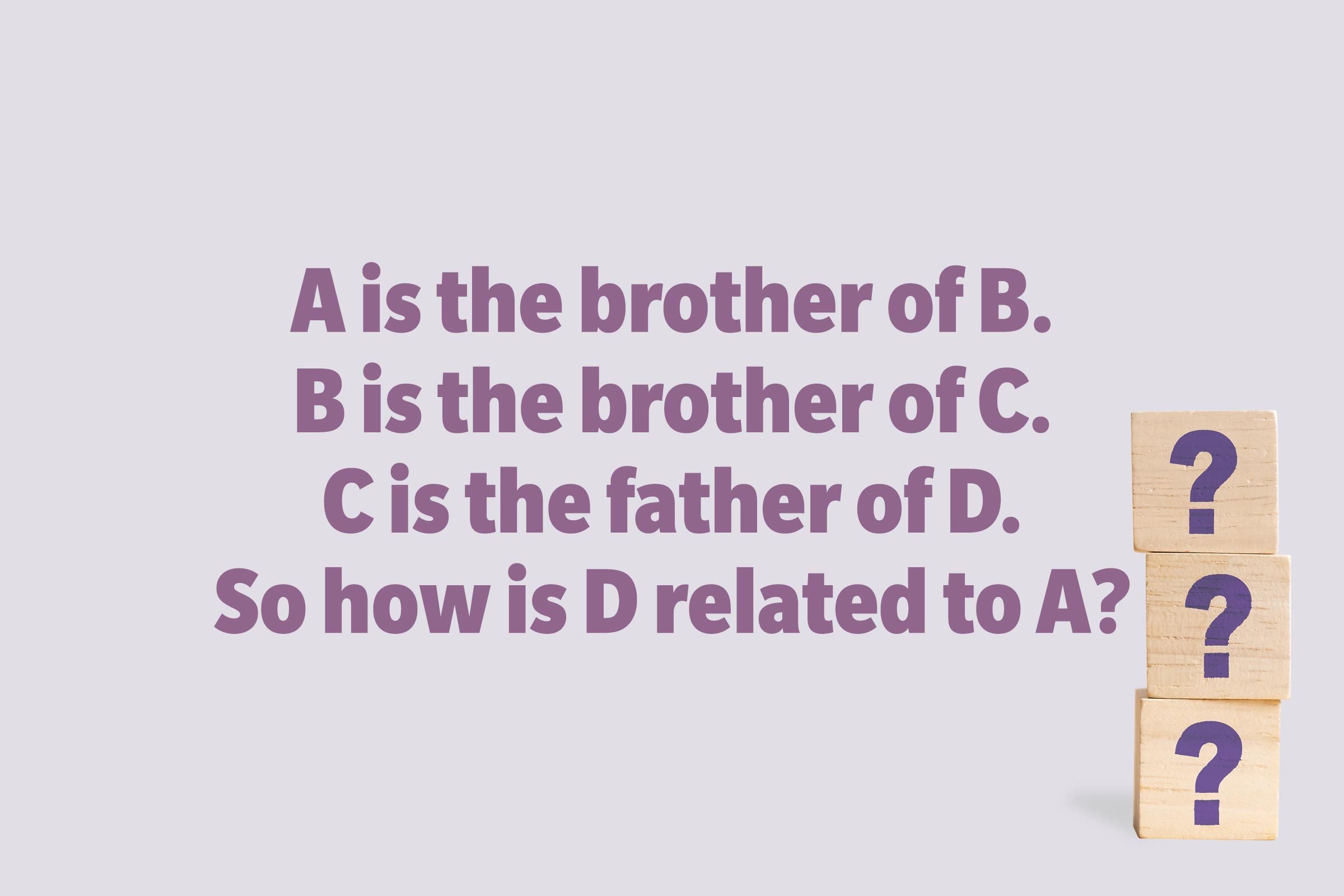 Riddles try to send your train of thought off in scattered directions. Try to stay clear and just follow the logic. Using letters as placeholders for names like “Uncle Bob” or “Aunt Linda” makes straightforward relationships seem difficult.

Answer: A is D’s uncle. Here are more brain teasers that will leave you stumped. 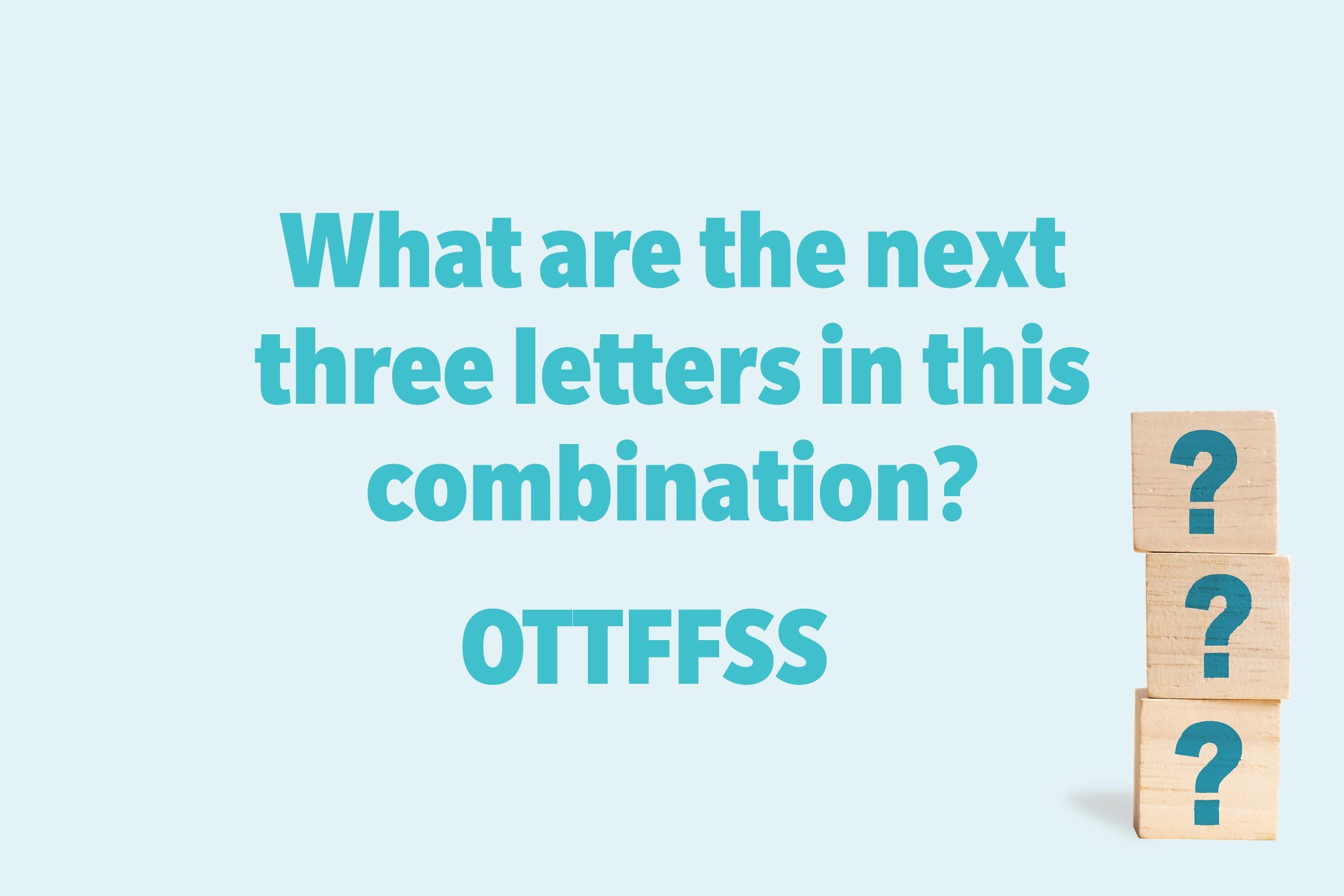 What are the next three letters in this combination? OTTFFSS

This super hard question asks you to determine the relationship between the letters. They seem random: a vowel, two consonants from the tail of the alphabet, two from the front, then two more. What could they mean? What’s the pattern? In this case, think of common strings of words to get you closer. But it still seems almost impossible to hit on the solution. 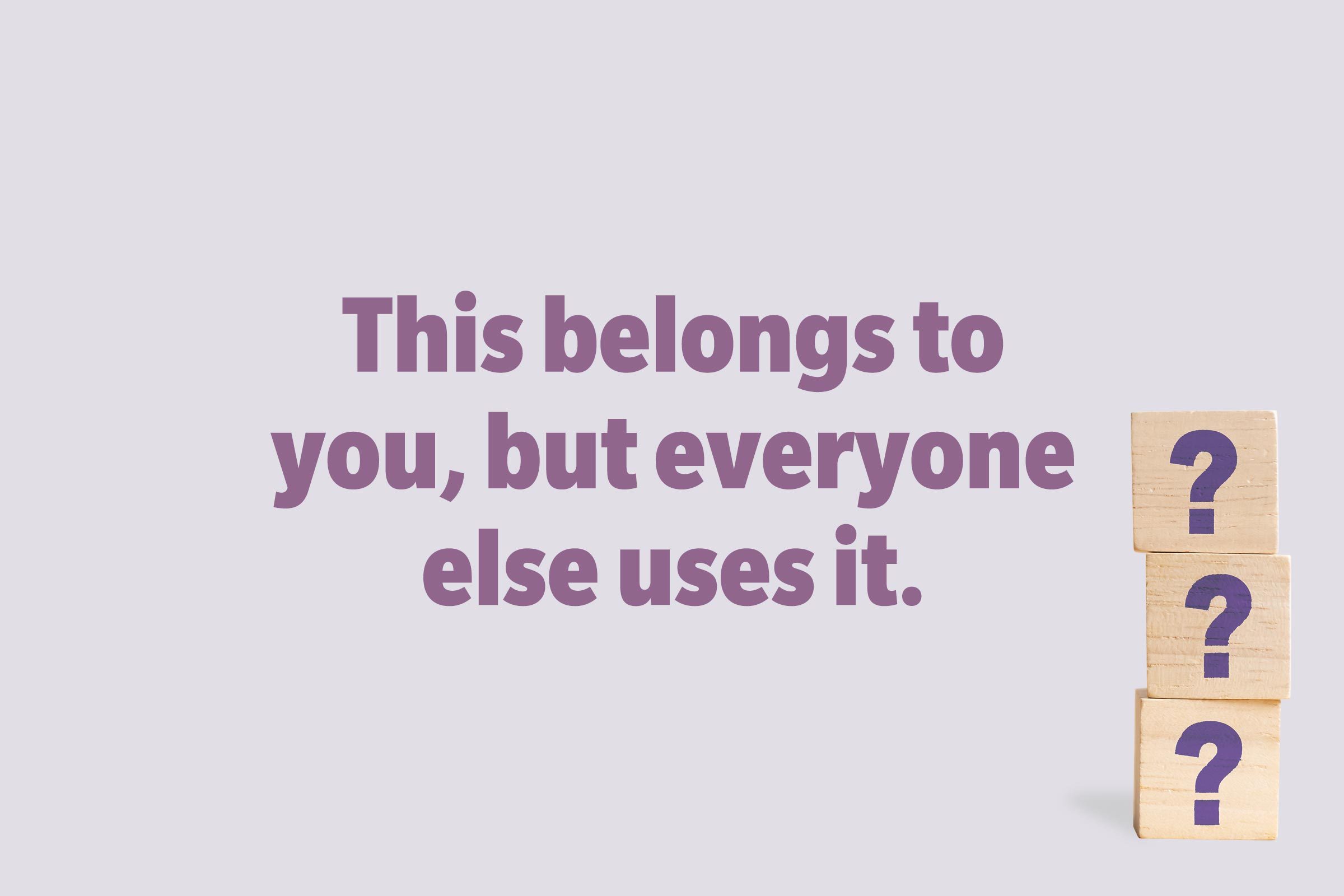 Riddle: Yours or mine

This belongs to you, but everyone else uses it.

The key to this riddle to think of anything else but an actual object. Use your critical thinking skills to get conceptual on this one.

Answer: Your name. Can you figure out these challenging detective riddles? 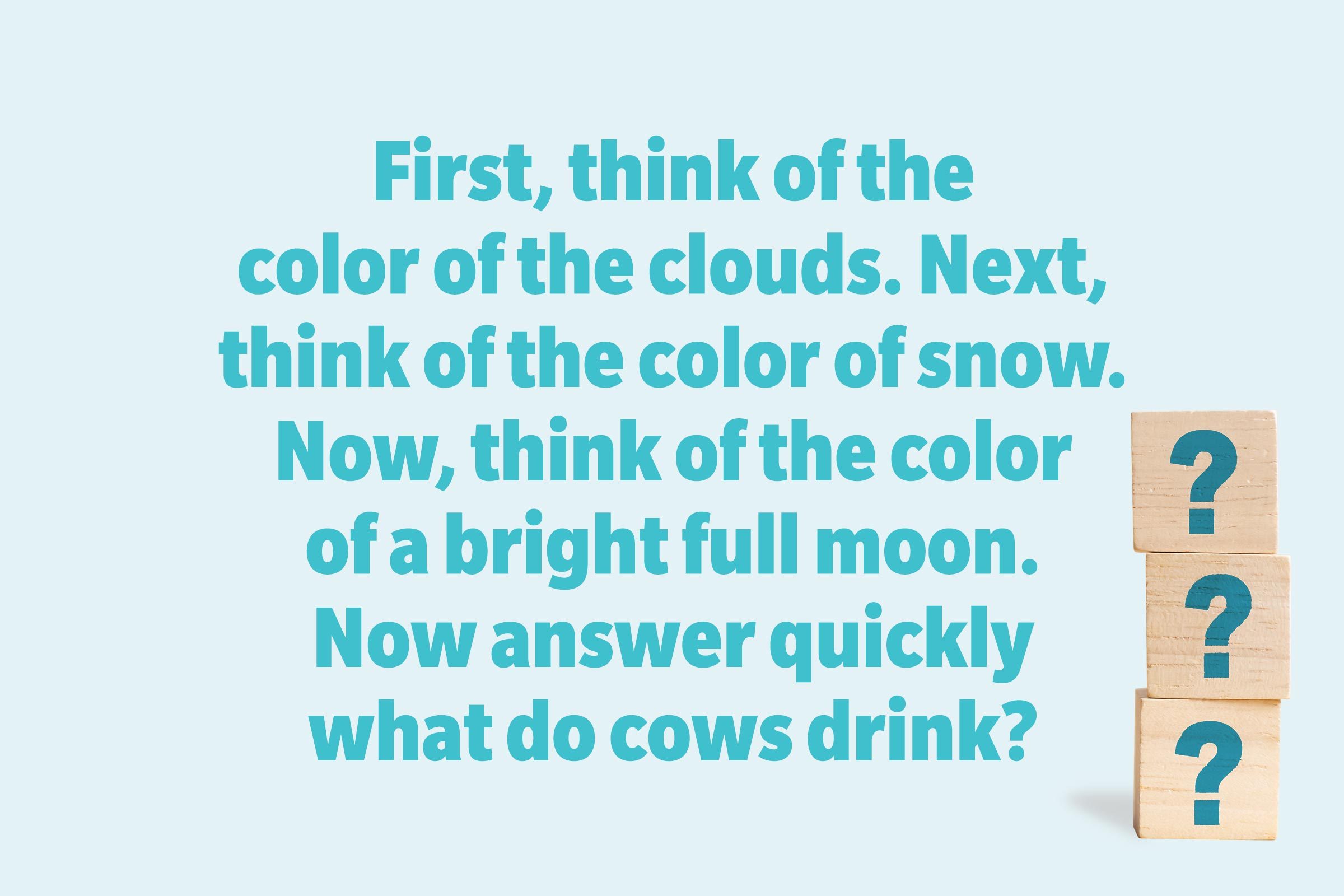 Some riddles work by getting your brain to go through a series of associations so you get locked in and can’t think of alternatives. Be careful with this riddle. Is the question really connected to that color you were asked to think about? Most folks say that cows drink milk because they’re fixated on the color white. 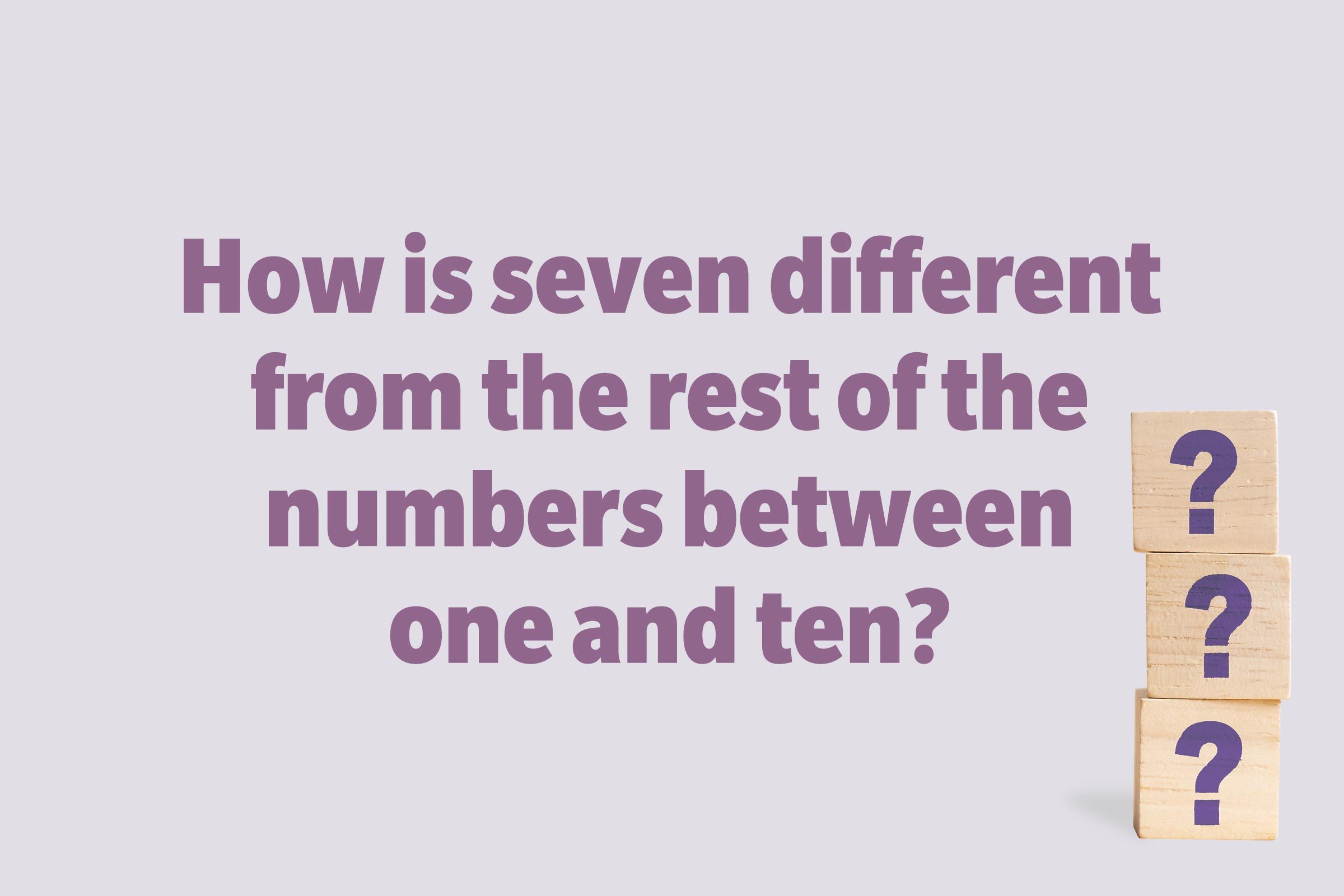 How is seven different from the rest of the numbers between one and ten?

The math nerds may start thinking about prime numbers or whether seven is divisible by this or that or if it can be cubed and all that. Avoid thinking about math altogether and think about the literal quality of the words that signify the numbers. Remember that riddles play with the differences between the literal and the conceptual, or the straightforward and the complex. For this riddle, think simple, but pivot to a paradigm separate from numbers.

Answer: Seven has two syllables and the other numbers only have one syllable. Here are some brain games that can help you get smarter. 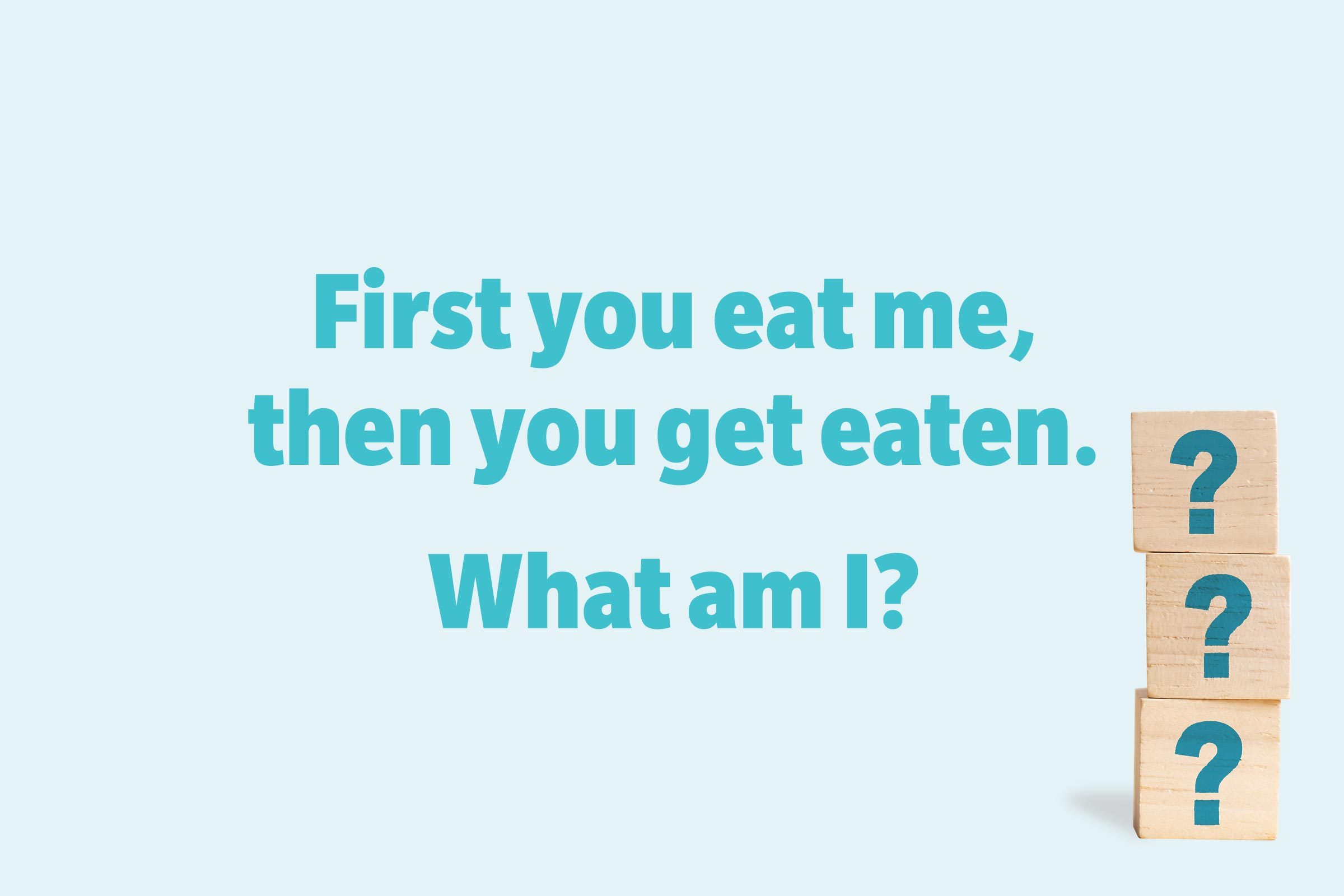 Riddle: Out to lunch

First you eat me, then you get eaten. What am I?

Hard riddles get you used to thinking about metaphors and concepts. Not this one; keep it simple and literal to get to the solution. But ask yourself who or what the “you” is. 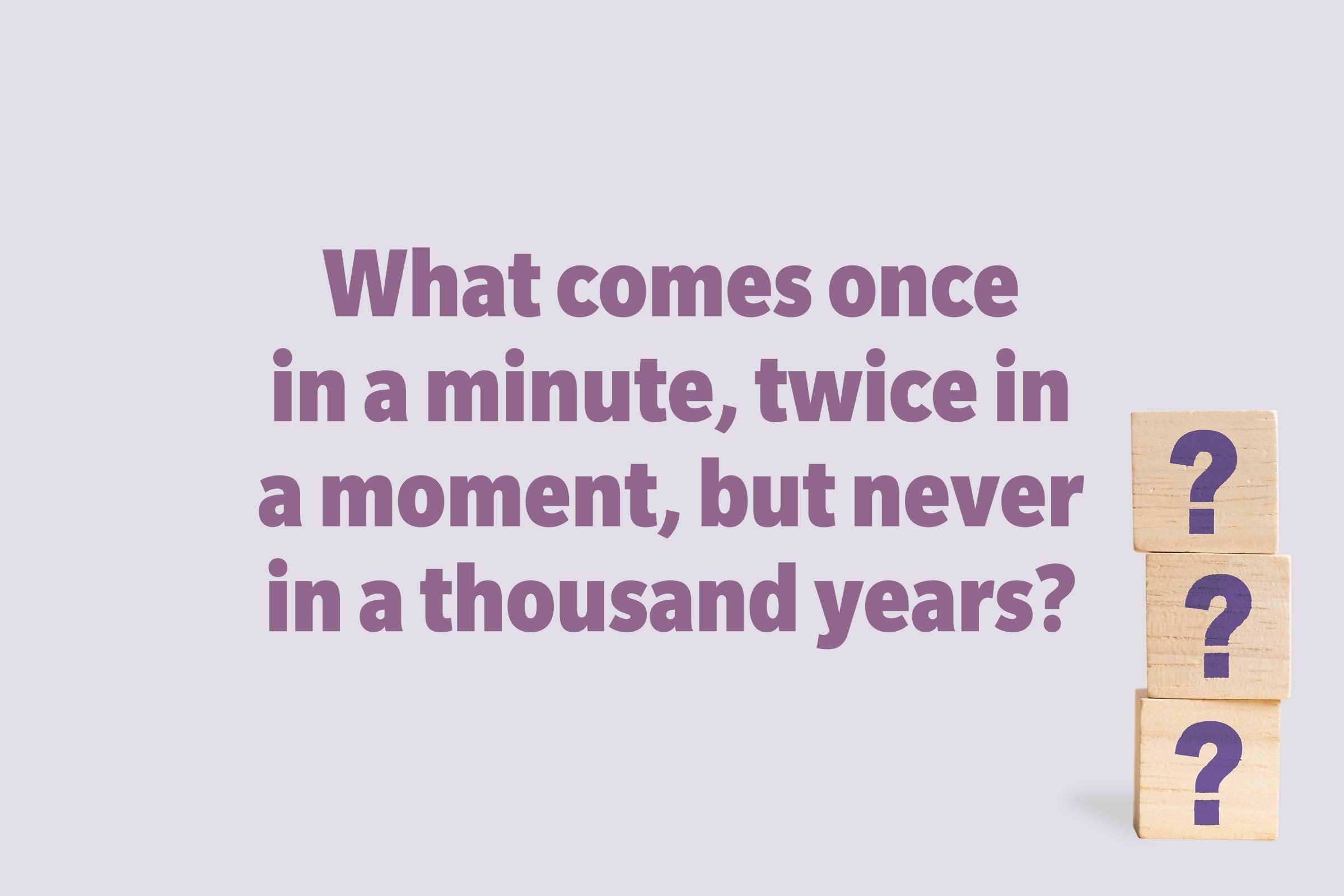 What comes once in a minute, twice in a moment, but never in a thousand years?

Again, riddles like this often have you crunching the numbers and stretching your brain cells thinking all about time and the way it works. By now, you might’ve figured out that number riddles rarely involve math.

Answer: The letter “M.” These are the strangest unsolved mysteries of all time. 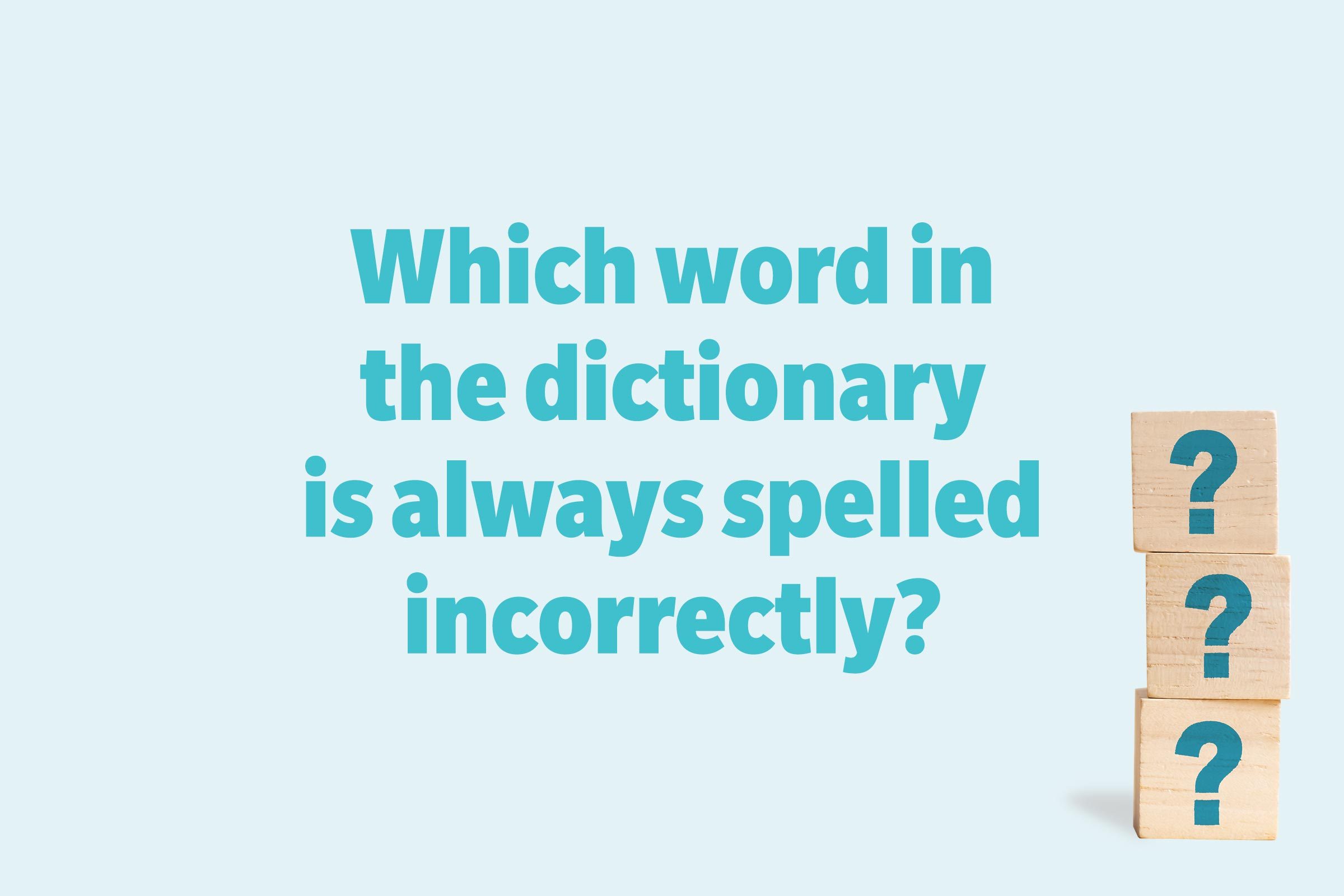 Which word in the dictionary is always spelled incorrectly?

Hard riddles obsess over wordplay and word games. This one has such an easy answer that it trips you up by getting you to think in a complex way. Some riddles require that. Not this one. 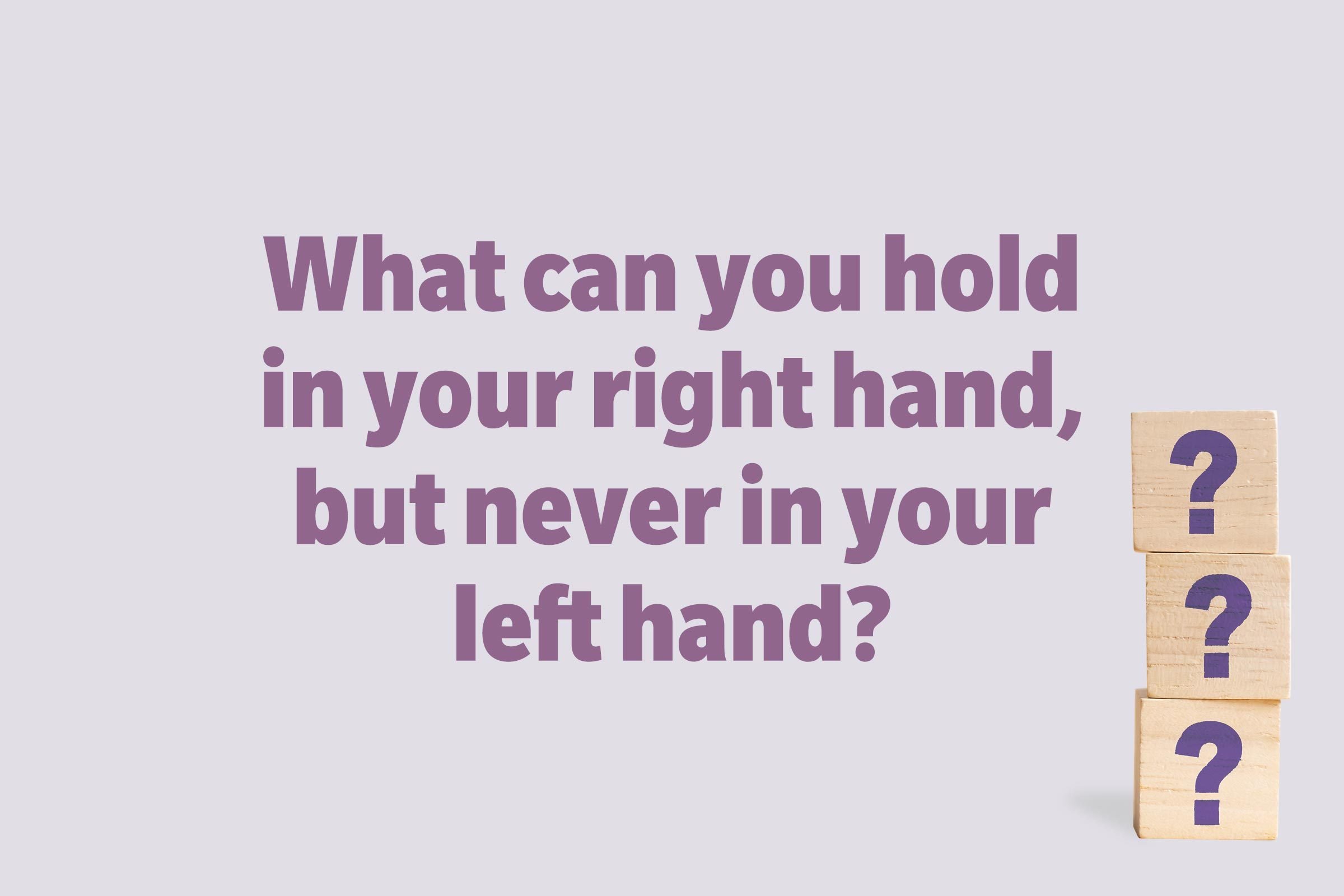 What can you hold in your right hand, but never in your left hand?

Take it slow and easy with this one. Perhaps if take a look at your own hands, that might give you a clue based on logic.

Answer: Your left hand. Can you solve this famous riddle that was said to be created by Einstein? 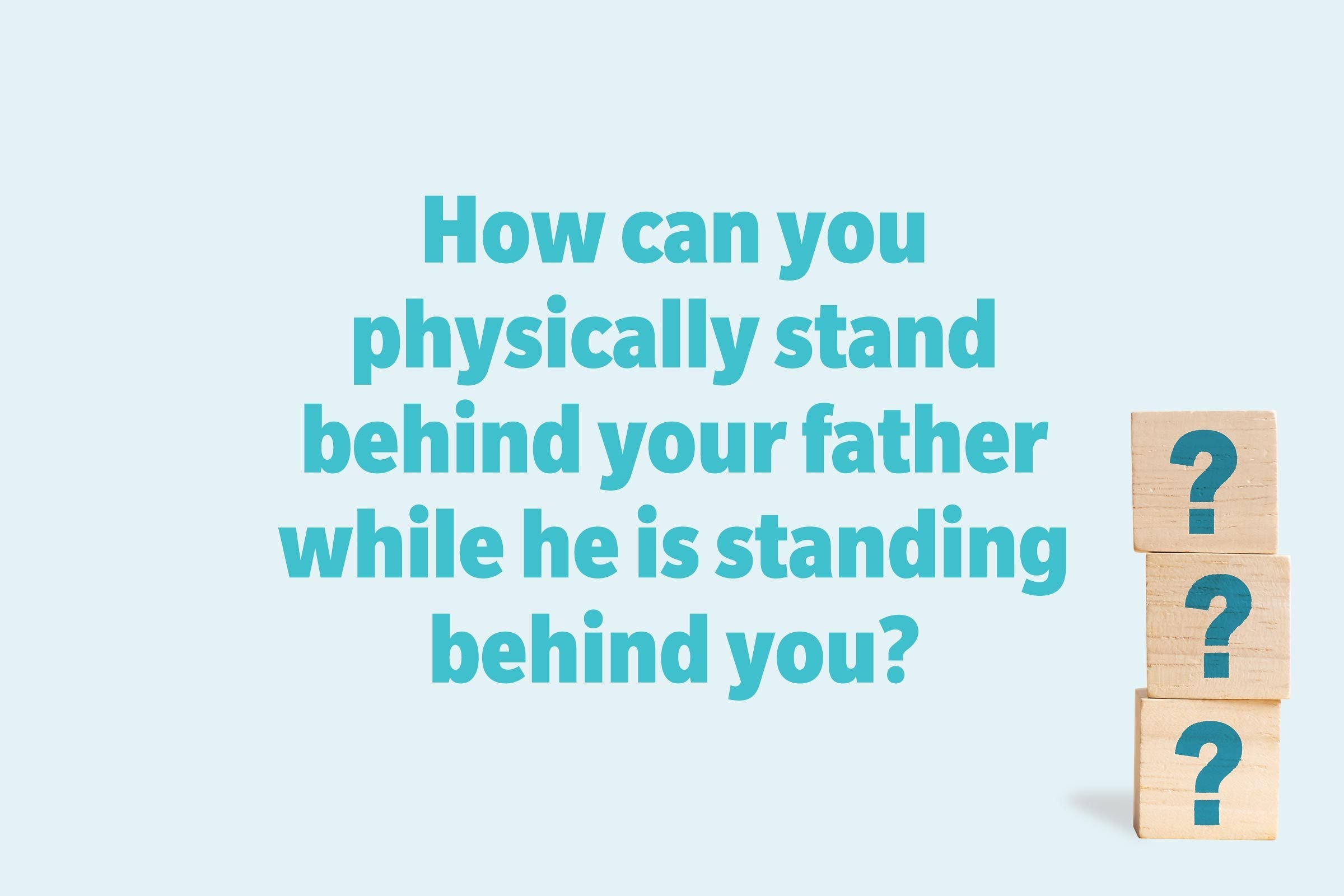 How can you physically stand behind your father while he is standing behind you?

For this kind of super tricky riddle, you might do best to actually map out the physical relationship in your head—if you can! This riddle works by tricking you into thinking about impossibilities.

Answer: You are standing back-to-back with your father. Next, check out the most famous riddles in history.