8 Compliments You Seriously Need to Stop Giving to Your Kids

You may think you're building up kids' self-esteem, but you may be unintentionally setting them up to struggle. Here's what not to say to avoid the praise trap. 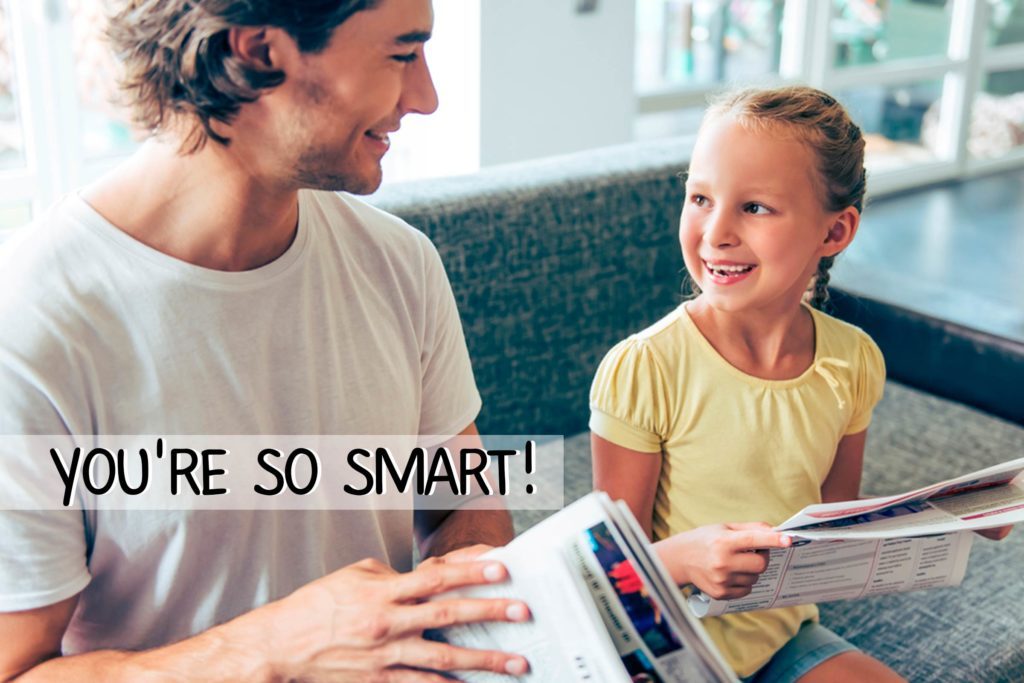 Previous generations may have been very strict and held back from praising their children, but parents today may be overcompensating. (Here are 52 of the worst parenting tips parents get.) According to child development experts, the point of praise is to encourage positive behavior. But simply being “smart” isn’t a behavior, and kids don’t perceive it as something they can control. So praising them for it “is not helpful because kids—and adults—usually think that being smart is innate and fixed,” says Christia Spears Brown, PhD, a psychology professor at the University of Kentucky. “They think you are born with a certain amount of ‘smartness,’ and if schoolwork comes easily, then you are smart, and if schoolwork is difficult, then you are not smart.” So when they struggle or fail, they will find it that much more discouraging and insurmountable a problem. Instead, studies have shown that parental praise for kids’ hard work instead of their inherent abilities better develops their perseverance. “Saying things like ‘I am so proud of how hard you worked on your math,’ or ‘I am proud of how hard you studied for spelling’ tells a child that success is due to effort,” Dr. Brown says. “Then, when kids face a difficulty, they are more likely to work harder to be successful than to give up because they simply ‘aren’t smart enough.'” 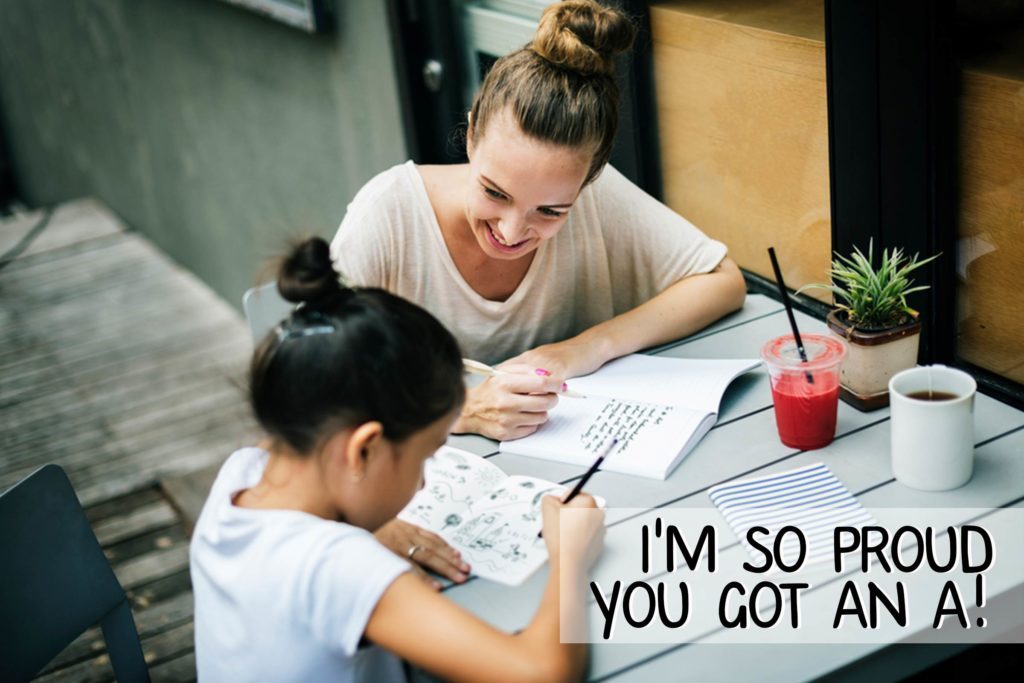 Of course, parents are going to be proud if their child gets a good grade—but it’s the improvement that should be praised instead of simply the end result. (Here’s more on why you should never call your kid “smart.”) “Research shows that people are happier when they have a ‘growth’ mindset rather than a ‘fixed’ mindset,” says Laura Markham, PhD, author of Peaceful Parent, Happy Kids: How To Stop Yelling and Start Connecting. Research from Stanford showed that kids with a growth mindset improved more in grades and study skills—because they believed they could get better if they worked at it. “We want to encourage children in ways that will help them develop a growth mindset, which will help them become more resilient and able to work hard to accomplish their goals in life,” Dr. Markham says. A better way to praise would be to show them how their effort led to their success. “Encouraging them with work-in-progress praise—’You really are getting the hang of that piece now after all that practice’—can give them a real sense that they are making strides towards becoming more proficient,” say Paul J. Donahue, PhD, the founder/director of Child Development Associates and the author of Parenting Without Fear. “Likewise the child who may not love reading but worked to master his first chapter book should hear solid words of encouragement: ‘You really worked hard to stay focused and sound out all the words, and to finish that long book.'” Getting such compliments will make the child more likely to repeat the action. 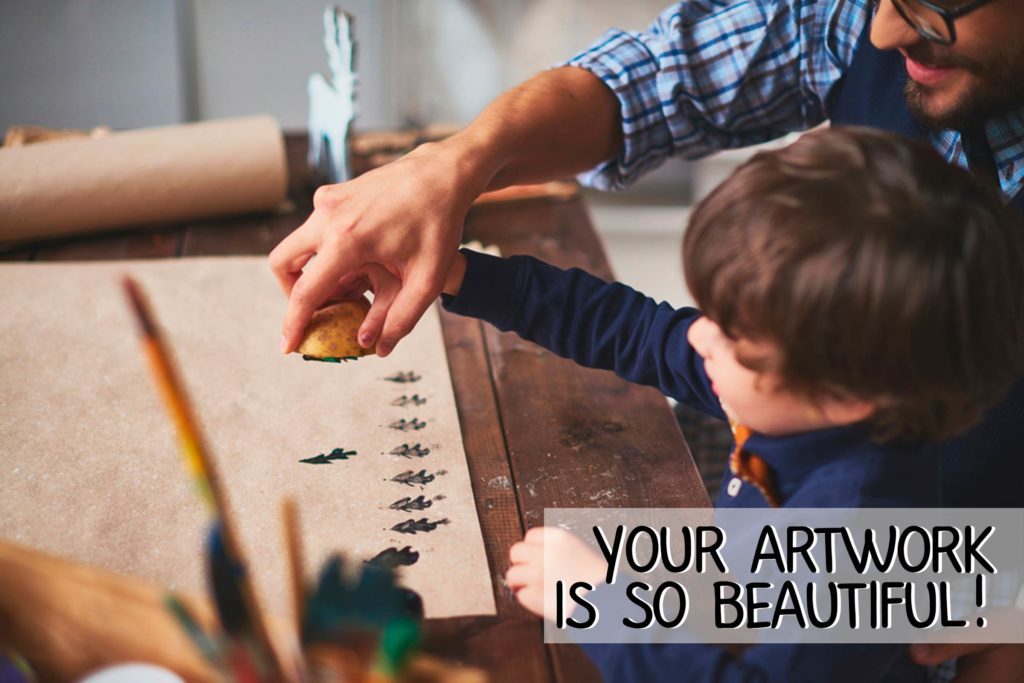 “Your artwork is so beautiful”

Here’s another tricky one: Maybe you do think their artwork is beautiful, but by praising kids in this way you’re encouraging them to look outside themselves for approval. (Find out more parenting mistakes to avoid with toddlers.) “It teaches the child that his work can always be evaluated by others, which undermines his confidence,” Dr. Markham says. “It also teaches him to ‘produce’ more and more paintings with less and less work, since the parent just keeps saying, ‘That’s beautiful!'” In one study, kids with low self-esteem who were overpraised on their artwork more often opted to then sketch a simpler drawing instead of a more challenging one, because it was the safer choice. To avoid inadvertently discouraging children, compliment how dedicated they were to their project, offer up specifics about the painting (“I see you used texture to show the waves in the ocean”), and then ask what they think of their work. It’s not your approval that should matter—it’s their own. Instead, your job is to foster kids’ interest in what they’re doing. “Why not focus on the effort, and what the child actually did or felt, rather than evaluating the product?” Dr. Markham says. Stay up to date: these are trends kids loved a decade ago that they don’t like anymore. 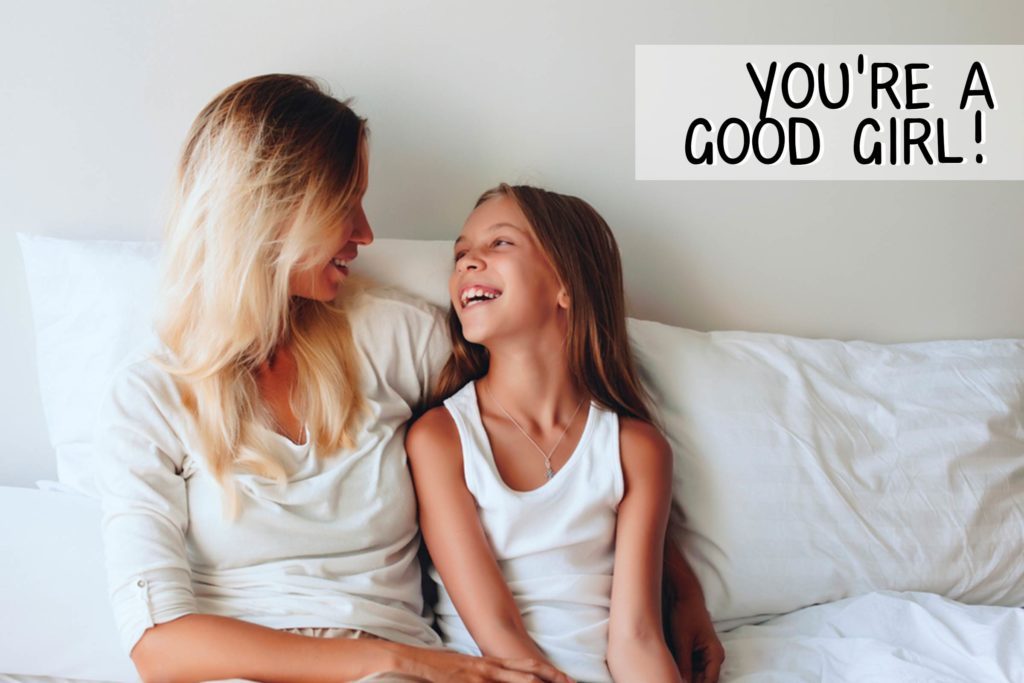 Praising a child for being “good” places an inherent value on them, rather than on their actions, so they believe themselves to be either “good” or “bad.” (Don’t fall into these 11 ways you’re being a toxic parent without even knowing it.) So what’s wrong with being good? “Every child knows they aren’t always ‘good’ and that they have thoughts and feelings you wouldn’t like,” Dr. Markham says. “So if you tell them they’re good, they need to show you otherwise by acting bad—or they become heavily invested in keeping you fooled, and they feel like they have to hide their true selves and be perfect, which is even worse.” Always refer to the child’s actions, rather than evaluating the child herself, she says. 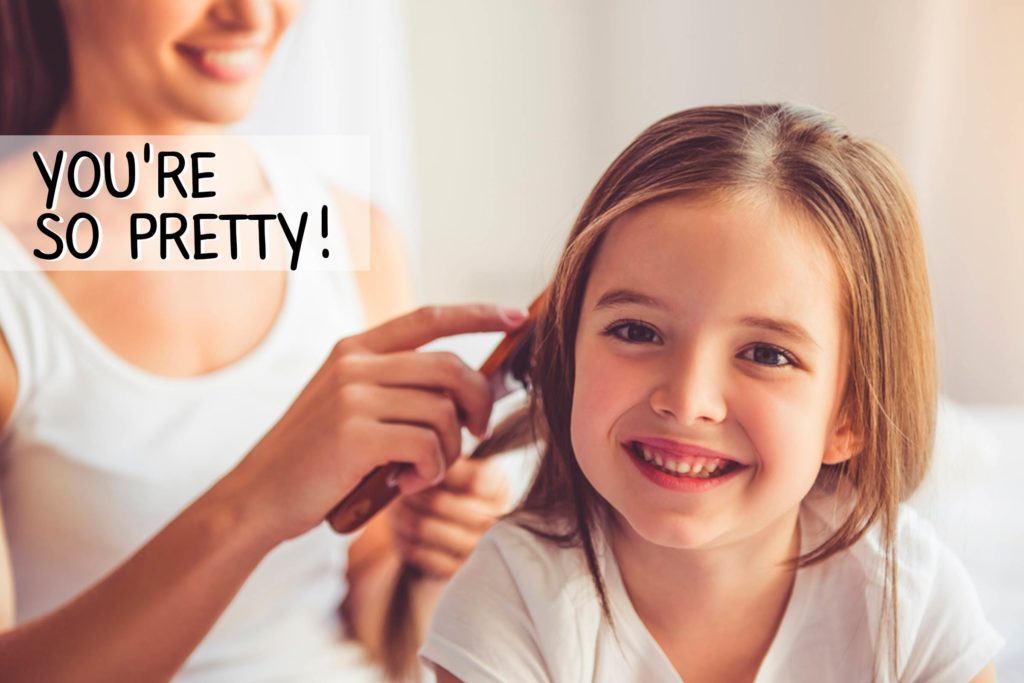 We may notice girls’ appearance, clothes, and hair more than we notice boys’, so it seems natural to compliment it—but this is evidence of our own gender bias. (Here are 10 things about raising girls moms wish they knew sooner.) “The problem lies in the messages that girls receive from every front,” Dr. Brown says. “Girls are growing up in a culture where their value is constantly linked to their appearance, so the collective message that girls internalize is that they must be attractive to have worth.” Research shows that girls feel pressure to look pretty by elementary school. Being pretty is also viewed as something that can’t be controlled—so if a girl feels she isn’t pretty, she may feel she isn’t lovable and there’s nothing she can do about it. Or, she may spend a lot of effort on trying to look pretty, instead of focusing on other, more valuable skills and interests. “In general, there is no reason to evaluate how a child looks—and every reason not to,” Dr. Markham says. (Find out things parents say that ruin their kids’ trust.) 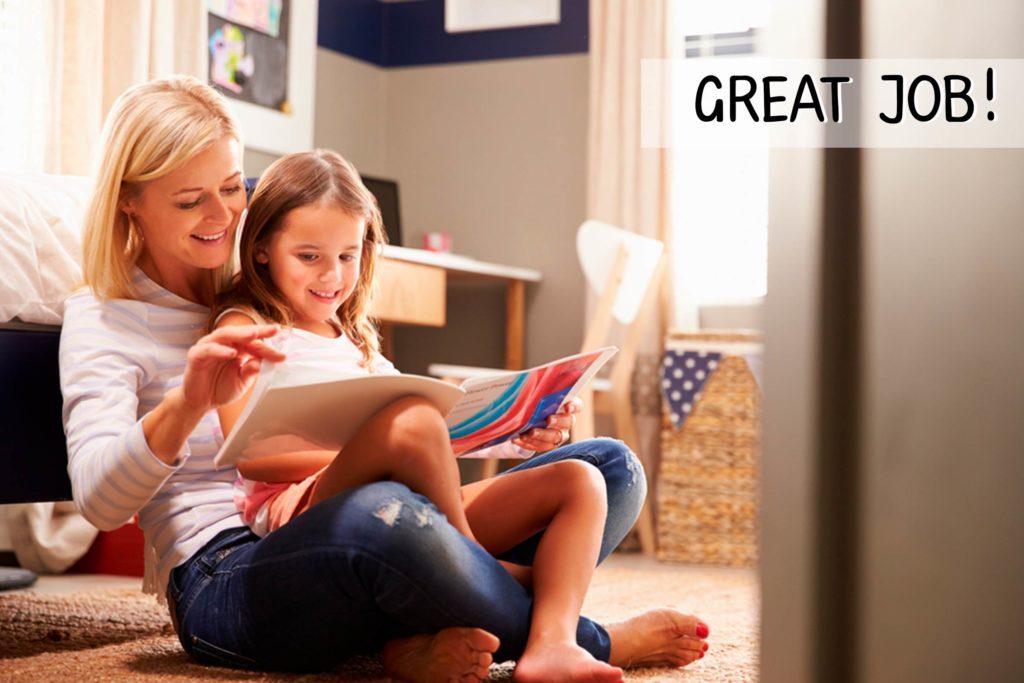 Most parents end up saying this about a hundred times a day—no judgment, but it’s not actually an effective way to motivate kids. (You also want to avoid the five biggest myths parents buy into.) “This creates a praise junkie who needs constant reassurance,” Dr. Markham says. “The child learns to do the task for the praise, and stops finding the inherent reward in the task, which steals the child’s motivation.” We love our kids and want them to feel good about themselves, but praise for every little thing they do makes the compliments lose their meaning. One Ohio State study showed that constant praise fostered narcissism, not self-esteem. Also, because it’s not specific, “great job” gives the child no actual information about what made the job great. Dr. Brown has an idea about how to turn it around. “Saying positive things to our children is always positive, but it doesn’t necessarily have to be praise,” she says. “For example, instead of saying, ‘Good job for setting the table,’ parents can change it to, ‘Thank you for helping.'” 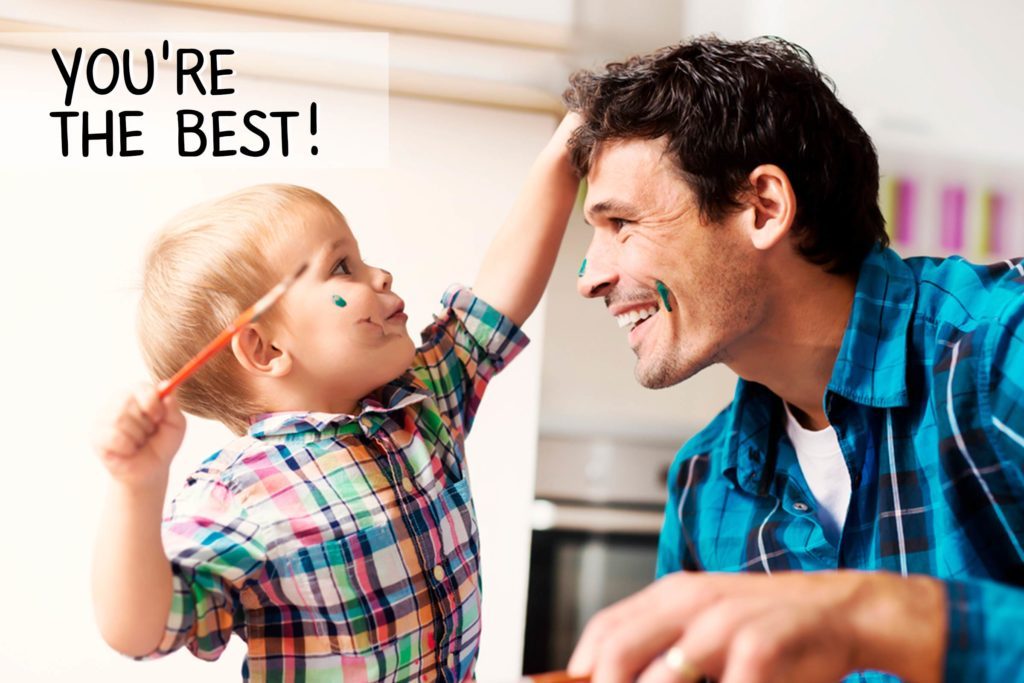 Even if they are literally the best at something (which isn’t too likely), telling kids they are could create an expectation of achievement that they will then do anything to try to uphold. (Read about ways to foster a better relationship with your children.) “Offering too much absolute praise can put a lot of pressure on kids to feel that they always have to be the best at what they do, a standard that can be unbearably high,” Dr. Donahue says. This can create feelings of inadequacy if a child thinks he can’t live up to it, according to research. “It can also backfire, and teach children to limit their focus to activities at which they know they can excel,” Dr. Donahue says. This can lead children to stop applying themselves, trying new things, or keeping at it when things get hard in order to keep you “fooled,” says Dr. Markham. Creating realistic, attainable standards and praising a personal best—rather than a comparison to others—is a more effective technique. 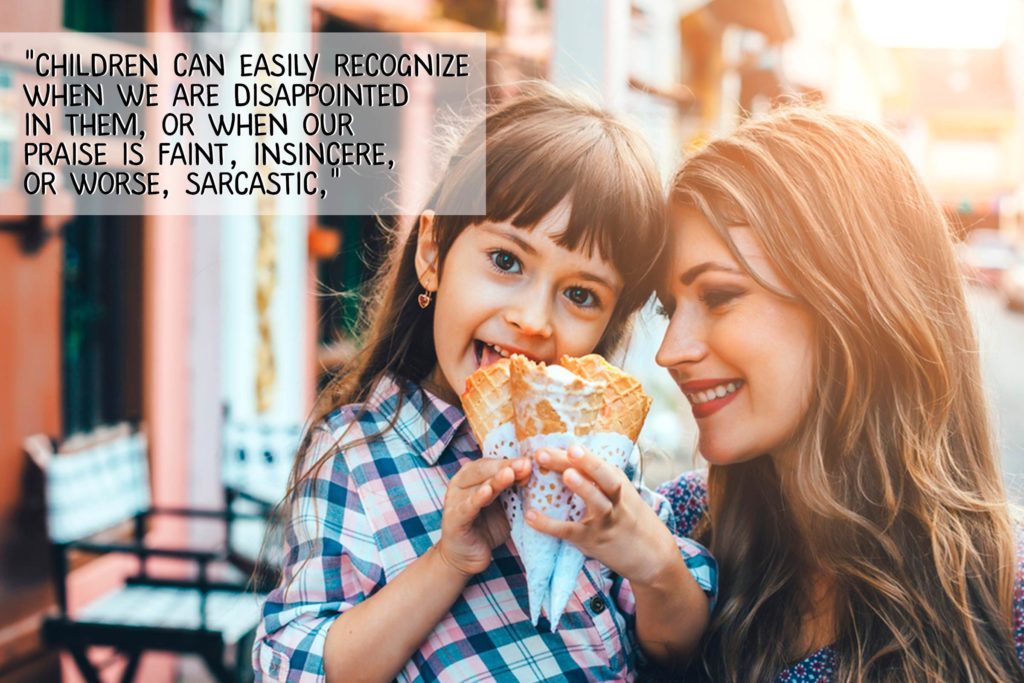 A compliment that’s not sincere

Kids have a good BS detector, and know when you aren’t really interested in or proud of what they’re up to. (Read about successful kids and 10 habits of the parents who raise them.) “Children can easily recognize when we are disappointed in them, or when our praise is faint, insincere, or worse, sarcastic,” Dr. Donahue says. “One of the most important things children desire is for their parents to be genuine with them in their affection, in their support, and in their constructive criticism.” For example, if your child sang horribly off-key in the talent show, you might say, “I am proud of how brave you were to get up in front of everyone—and you remembered all the words!” A recent study from South Korea showed that children’s perceptions of overpraising (as well as under-praising) predicted poorer school performance and higher depression than praise that reflected reality. “The goal is to make the praise meaningful, and show children what traits and attributes we value, such as hard work, being helpful, and being kind,” Dr. Brown says. “Parents should not think of praise as a way to build self-esteem, because it doesn’t. Instead, praise can be a way to reinforce the specific attributes we want to foster in our children that will help them be more successful adults.”