12 Fast-Food Items You Should Never Order, According to Employees

Before you coast up to that drive-through, find out which menu items fast-food employees think you should skip and why. 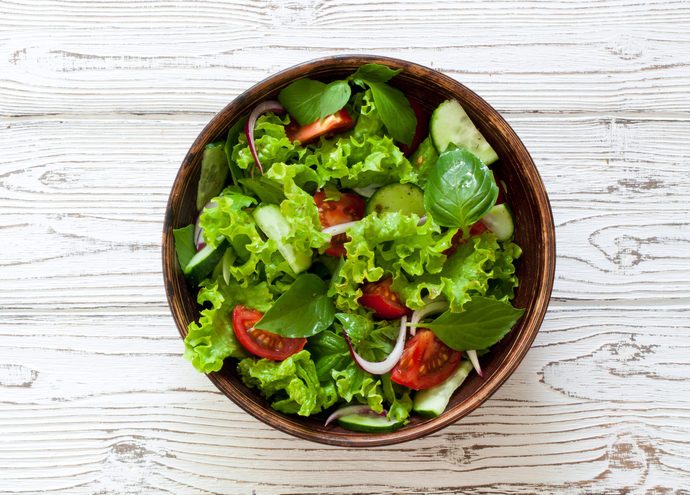 Within the past decade, fast-food chains made a conscious effort to include lighter fare on their menus, more salads and the option of apple slices or yogurt with kids’ meals instead of fries. More recently they’re touting newer menu items as hand-crafted or even artisanal, but don’t believe the hype. “There might be a few extra toppings on the burgers or sandwiches we call hand-crafted, but they aren’t any better quality than the stuff you’ve been eating for years,” says Tricia, who has worked at two popular fast-food establishments as she attends college. Employees would probably recommend you try one of these new items coming to fast-food restaurants. 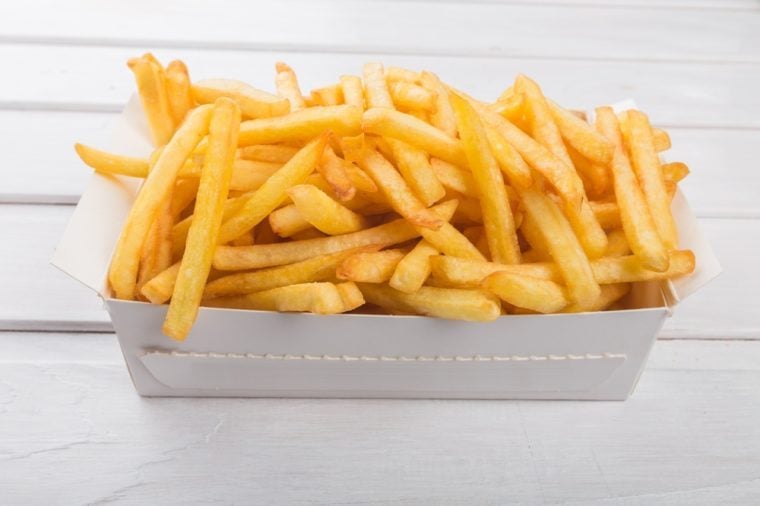 Just because the so-called value menu might mean more food for little money doesn’t mean you should order the largest size meal available. “After working in fast-food I’ve realized no one needs that much fried food,” says Nicky, who has worked at McDonald’s for two years. “It’s tempting when you think you’re getting more for less, but you’ll end up feeling disgusting after you eat all of those fries.” Check out the most convenient fast-food restaurants. 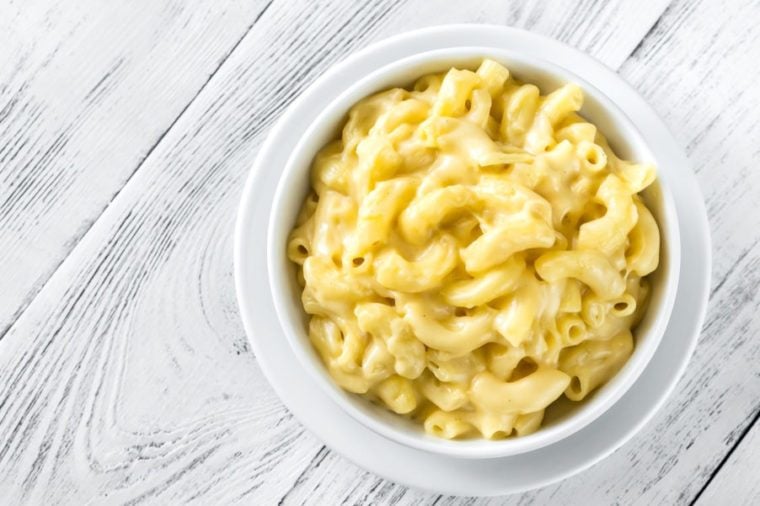 The mac and cheese

Macaroni and cheese is pure comfort food, and sometimes the craving is too strong to resist. But a Panera employee responding to a thread on Reddit recommends skipping their take on the classic dish. “The pasta, it’s all microwaved. This includes the mac and cheese,” says commenter President Pancake. “The best items are the real sandwiches and salads. They use real ingredients and are usually fresh.” You can find these fast food items at the grocery store. 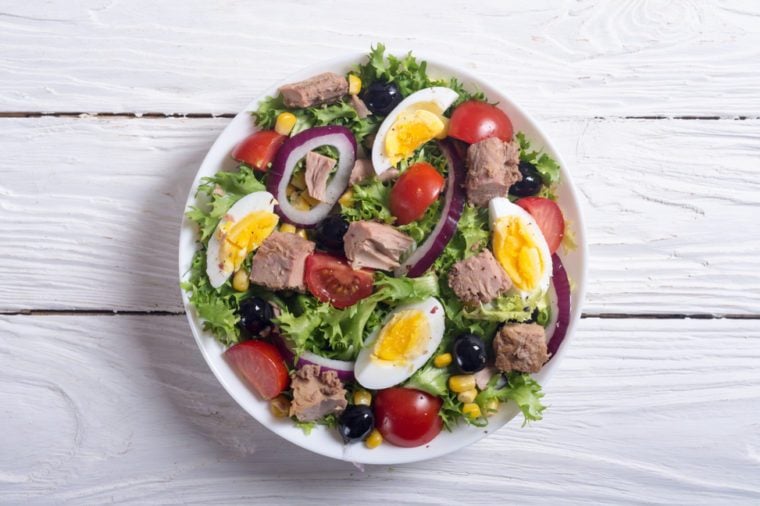 You might want to avoid the tuna fish salad or anything similar that can be prepared ahead of time. “I worked at Friendly’s and they made the tuna fish once a week!” says Colleen of her time at the quick-serve restaurant. Find out more secrets fast-food workers aren’t telling you. 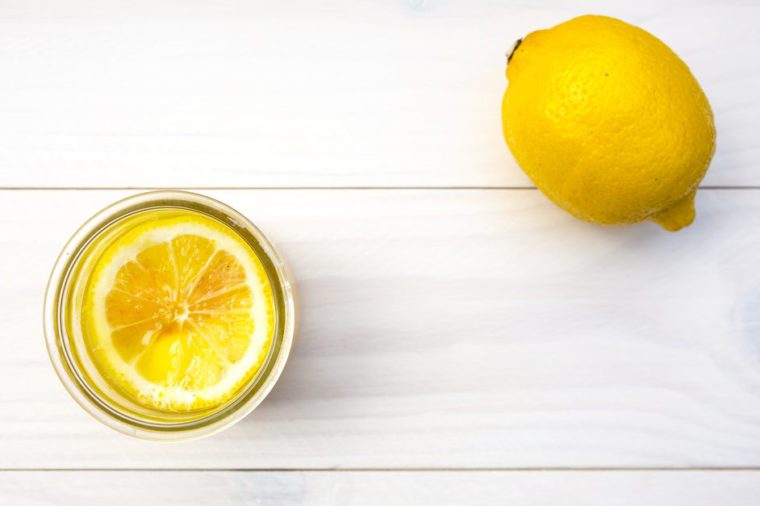 You may be thinking that the parsley and lemon look decent, but at a fast-food place you may want to think again: Jaime, who worked at a Florida-based fast-food restaurant, advises: “Never eat any garnishes or pickles. The place I worked at would wash them and reuse them if you did not eat them. They also instructed us to pull uneaten cups of coleslaw off of plates and re-serve them. Thankfully this place is long closed.” Check out the most popular items at McDonald’s. 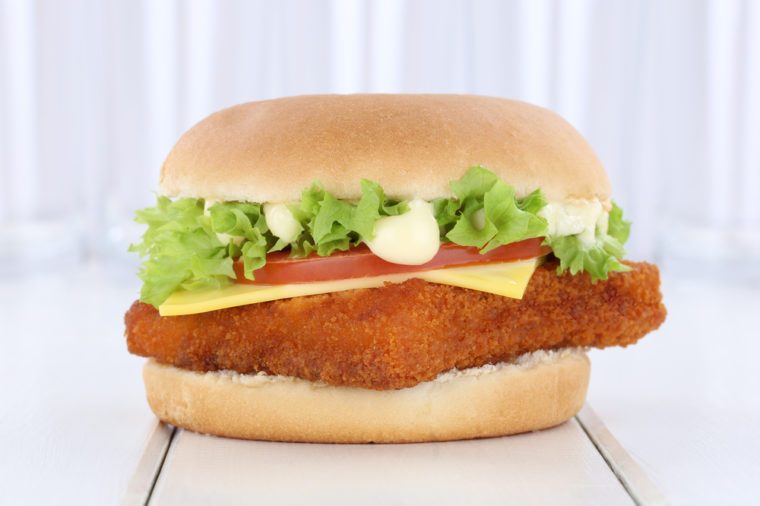 While ordering the fish or other seafood may be a healthy option at a regular restaurant, it isn’t in fast-food joints. “People don’t pay attention, but the Filet-O-Fish is one of the unhealthiest things on our menu,” says Charity, who works at a location in North Carolina. There’s another reason to avoid the fast fruits de mer: “I’ve worked at quick-serve places like Panera and at fast-food spots like McDonalds—do not order anything that is advertised as seafood,” says Michael. “There’s no way it’s fresh, and even if you’re aware of that, it has also been sitting around for a while. Go with something on the menu that you know people are ordering all the time.” Also, avoid these items that servers won’t order at their own restaurant. 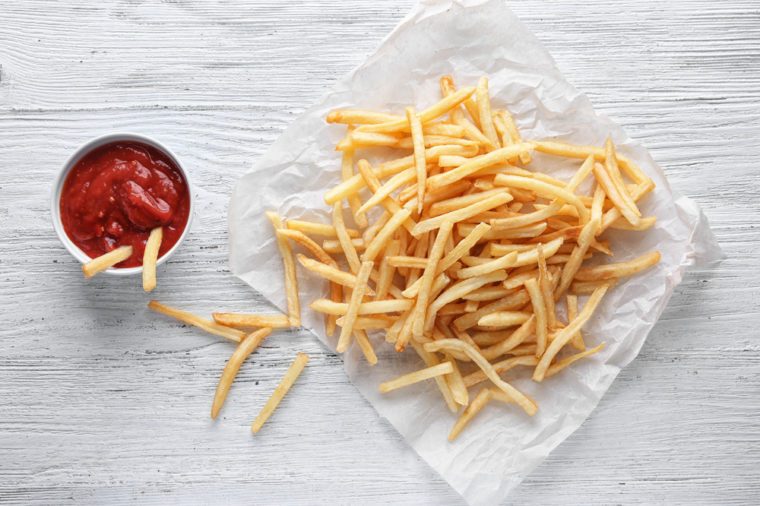 Across the board, the fast-food employees we interviewed rolled their eyes at folks who insist on ordering fresh french fries. One worker explains why: “When a customer orders fresh fries they usually end up complaining about how long it takes,” says Stephanie, who worked at a Burger King in Ohio. “Also, depending on how busy we are, we’re not making a special batch special for you, so you may walk away with the same fries you’d get without the request.” Find out which fast-food “facts” are totally false. 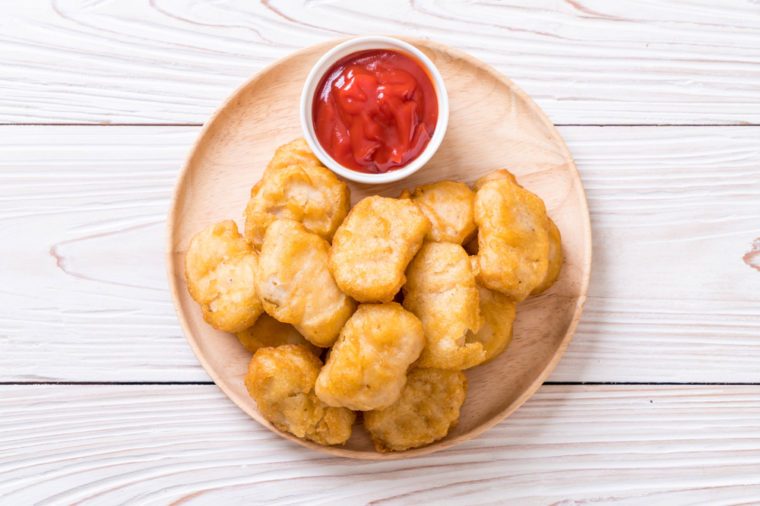 But you may want to order chicken nuggets fresh

On a Reddit post about items fast-food employees recommend you avoid, Ritch88 says: “If you order chicken nuggets, just ask for them fresh. Otherwise, they’ve been just sitting in their container in the heat. They have a timer, but nine times out of ten when that timer goes off, people just reset the timer instead of making new ones. This could go on until all the nuggets are sold.” If you already avoid meat, try these popular vegetarian items at fast-food restaurants. 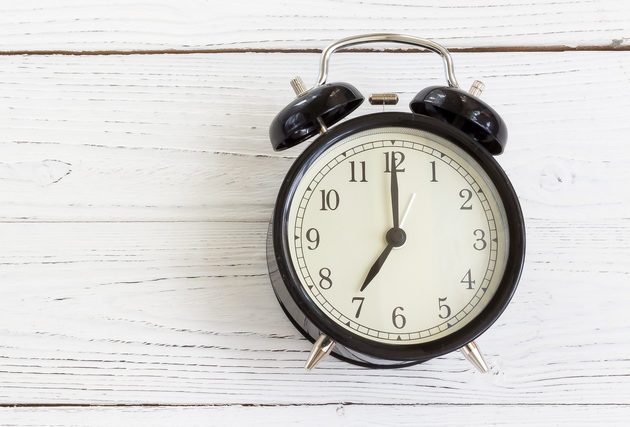 Watch the clock at the drive-through

Reddit member and former Panera worker Meganoli recommends being aware of the time you decide to pull through the drive-through. “Please, please, please don’t come through the drive-through at 8:30 p.m. and order three paninis and five salads and then get mad because it takes so long. The drive-through is excellent for people who want to get a quick coffee or bakery item, but even though our food is fast, we are not fast food. These things take time and it’s easier for everyone if you just come inside.” These 10 fast-food scandals rocked the industry. 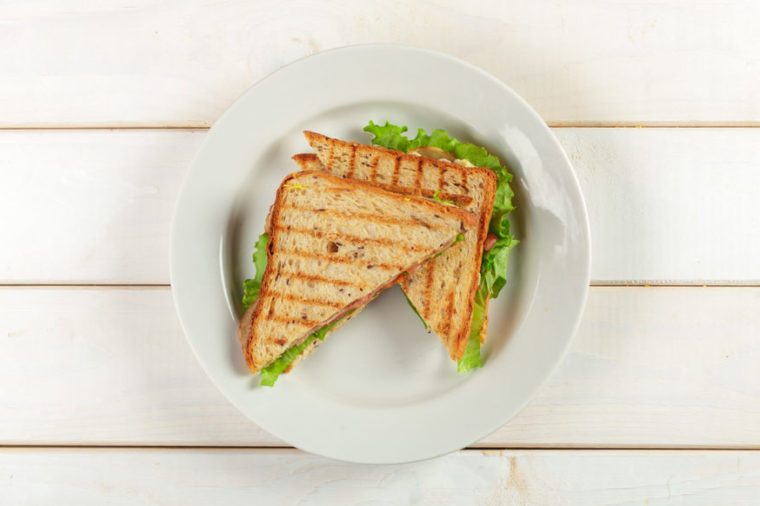 If you’re hitting a place that’s largely known for burgers, you’re probably going to want to avoid the grilled chicken sandwich. “At least at our location, we didn’t sell many grilled chicken sandwiches. So it sits around a lot longer than other menu items and the texture is so rubbery,” says Stephanie. This is what happens to your body after eating a fast-food burger. 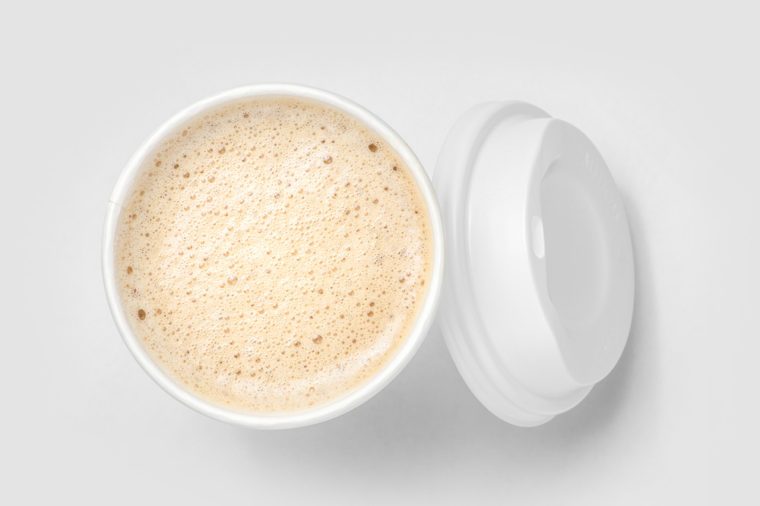 Customers constantly ask Starbucks employees for the secret menu—but there isn’t one. The notion that there’s an alternative menu comes from the fact that some creative customers have come up with popular concoctions. But if you want a special drink, tell your barista the ingredients: “I constantly get questions about the ‘secret’ menu but I swear we don’t have one. Just tell me what you want!” says Amelia, who works at a Starbucks in Chicago, Illinois. 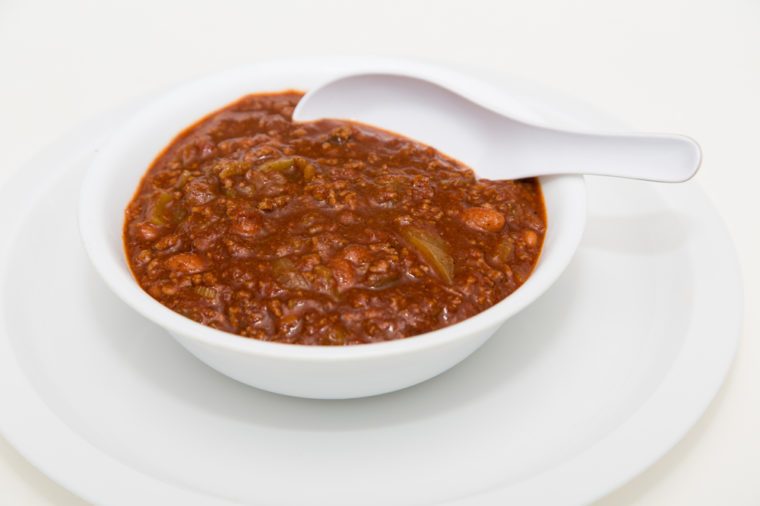 The chili is a no-go

The chili at Wendy’s may look like a comforting menu option, but not when you find out what it’s made from. “[It’s] not really a health concern but most people are surprised when I tell them about Wendy’s chili,” says Reddit user Cozmo23. “The meat comes from hamburger patties that sat on the grill too long to serve to customers. They take them and put them in a bin and then throw them in the fridge. When the chili is made they take it out, boil it, chop it up, and dump it in the chili.” Next, find out the customer habits that annoy fast-food workers the most.