These photos of Ol' Blue Eyes haven't been seen by many. They'll take you back to the classic era of crooners and the Rat Pack.

A photograph from the collection of Joseph Decesare, a childhood friend of Frank Sinatra, shows Sinatra at age 9, when he was the May Walk King of Hoboken, New Jersey. The girl at right is unidentified. Did you know that one of Frank Sinatra’s songs is banned from karaoke? Here are some other karaoke songs that have been banned.

“My parents, Joe Marsala and Adele Girard, were jazz musicians in New York City in the 1930s and ’40s. One of their friends during this period was a young Frank Sinatra,” says Eleisa Marsala Trampler of Denver, Colorado. “Though they went their separate ways, they continued to stay in touch. Frank even recorded one of Dad’s songs, ‘Don’t Cry, Joe,’ in 1949, reaching number nine on the hit parade.” In this photo, Frank is accompanied by Adele on the harp. 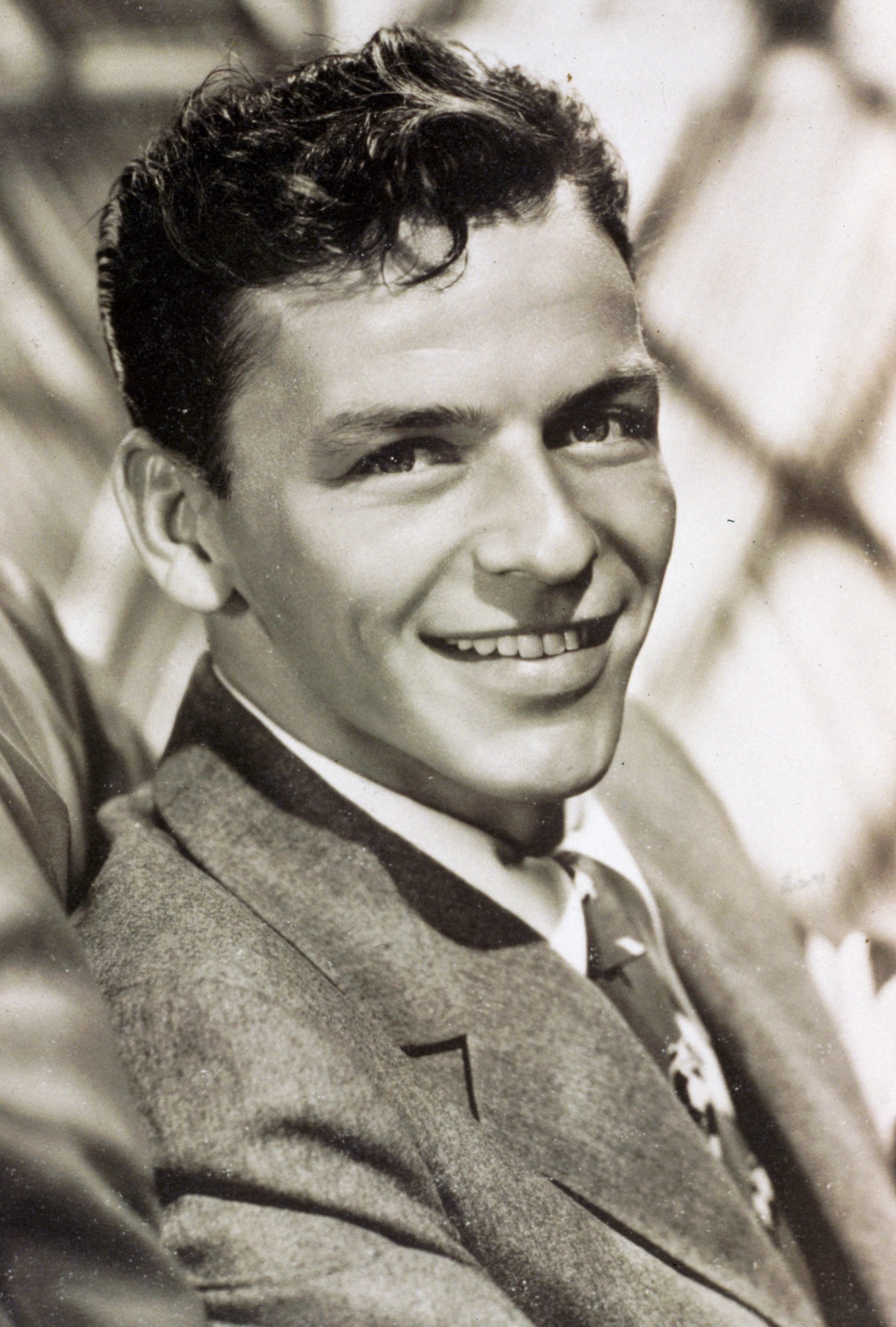 In the late 1930s and early ’40s, many Jewish-American families left the city during summer to vacation on farms and resorts in the Catskill Mountains, known as the Borscht Belt. “One year, a black Ford delivered four more people from our hometown of Hoboken, New Jersey, including a young woman holding a baby, and her husband, a slim, blue-eyed young man,” says T.J. Arnold, now of West Chester, Pennsylvania. “That summer, Frank Sinatra’s career took off with a No. 1 hit, ‘I’ll Never Smile Again.’ Our paths never crossed after that.” Check out these rarely seen photos of Elvis Presley too.

A couple of crooners

Rivals for the swoon-croon vote, Frank Sinatra and Bing Crosby, buried the hatchet in Hollywood long enough to sing a duet on Jan. 30, 1943. They agreed they would sing if someone bought a $10,000 war bond. Someone did during an exhibition war bond tournament at the Lakeside Golf Club.

Fans surround Frank Sinatra as he arrives in Pasadena, California, on Aug. 11, 1943, for Hollywood film and singing engagements. Have you seen these stunning, rarely seen photos of Marilyn Monroe?

“During World War II, my father, Austin Mansfield, was a sergeant in the Army Air Corps stationed at Mitchel Field in Long Island, New York, as a liaison pilot. He belonged to the Mitchel Field choir, which performed with Frank Sinatra at Carnegie Hall in September 1943 as part of the kickoff for the Third War Loan Campaign. The program was broadcast on CBS Radio,” says Mike Mansfield of Deltona, Florida.

Frank Sinatra sings at a Brooklyn Dodgers game on April 13, 1944, that was a benefit for the Red Cross War Fund. At Sinatra’s left is Dodger Charlie Dressen.

At a crowded table at Ciro’s, Frank Sinatra steals a glance at his Oscar, which he won for his performance in the picture “The House I Live In.” His wife, Nancy, looks on at left. 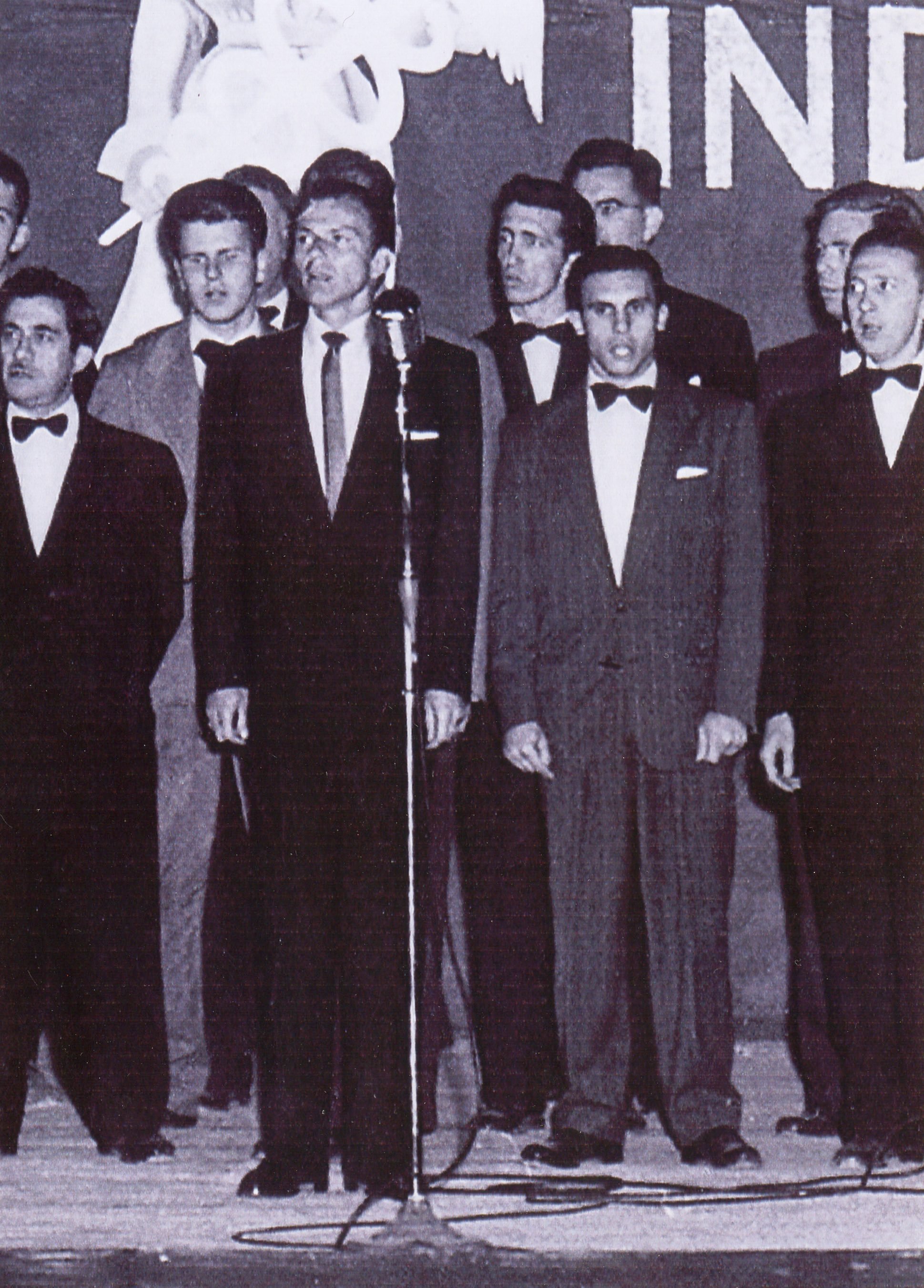 “In 1952, I worked at Sperry Gyroscope on Long Island, New York. A few of my coworkers and I would get together to sing occasionally. One day, we were asked to back up a well-known singer, as he sang ‘God Bless America.’ That’s me on the well-known singer’s left,” says G. Benza of Las Vegas, Nevada. Also, take a look at these rarely seen photos of Princess Diana.

Members of the “Rat Pack,” from left: Peter Lawford, Frank Sinatra, Dean Martin, Sammy Davis Jr., and Joey Bishop, perform at the Sands Hotel in Las Vegas, Nevada, on Jan. 20, 1960. Get a look at some more rarely seen photos from throughout the 20th century.