The celebrations were just as big, but the dresses and football uniforms have changed quite a bit. 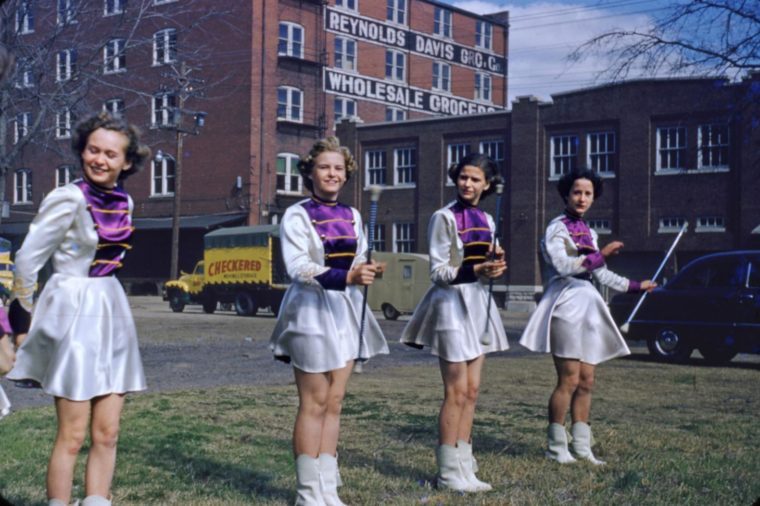 Mary Dyer sent in this 1952 photo of school baton twirlers practicing their routine in Arkansas. 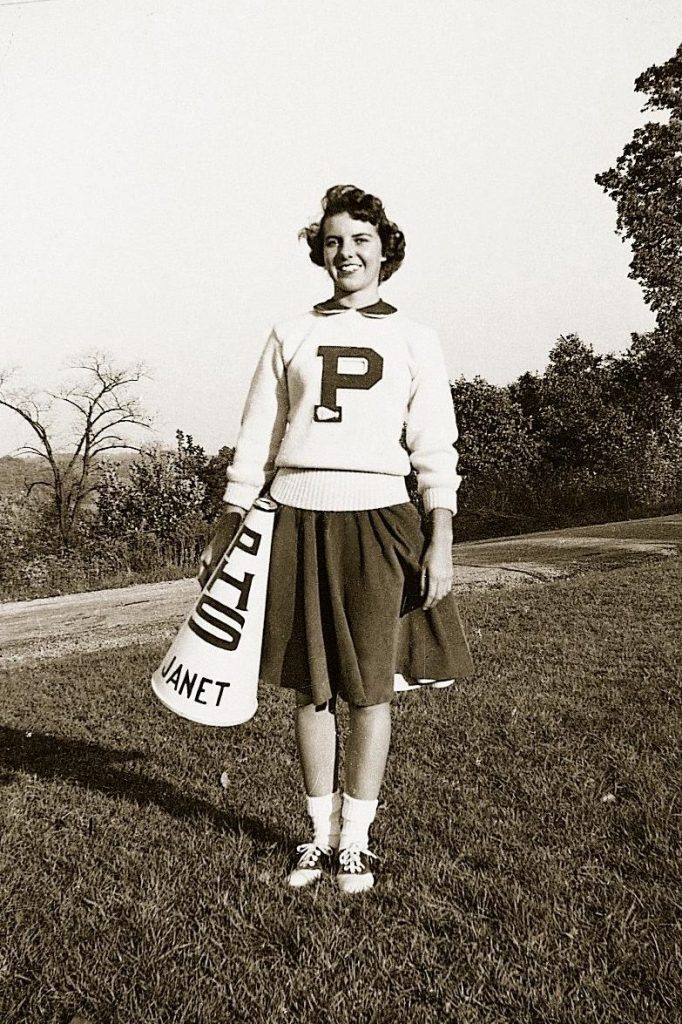 “What a thrill it was to be chosen for the cheerleading squad from 1950 to ’54 at Perry High School in Pittsburgh, Pennsylvania,” says Janet Houghton Loughran. “By senior year I was named captain. To this day I can still recite some of the cheers.” Celebrations have changed a lot, check out these vintage photos of birthday parties through the decades. 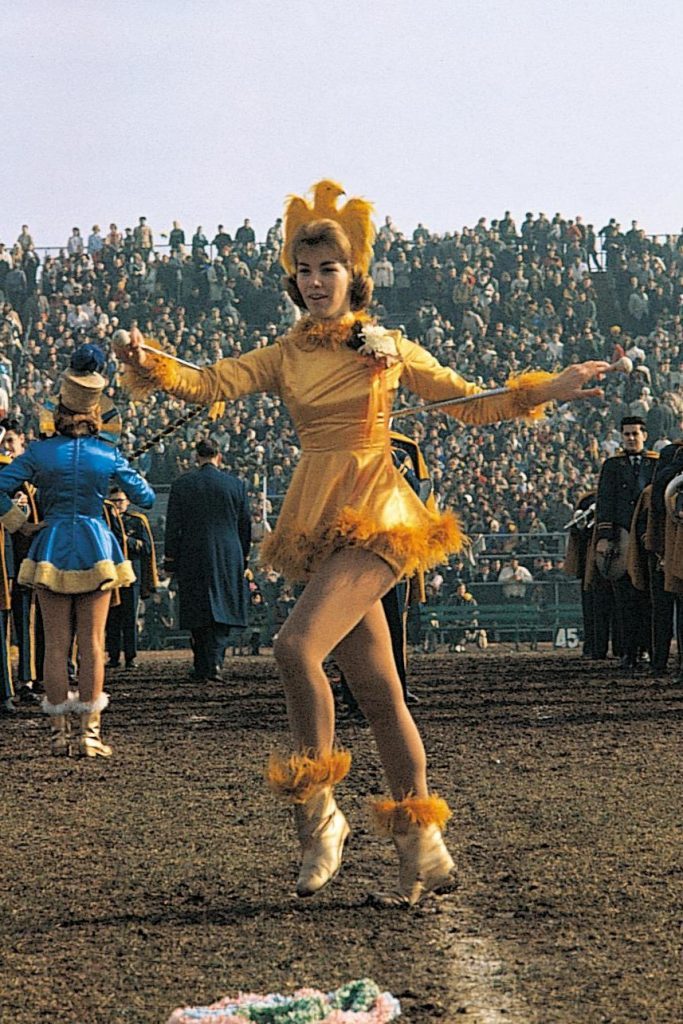 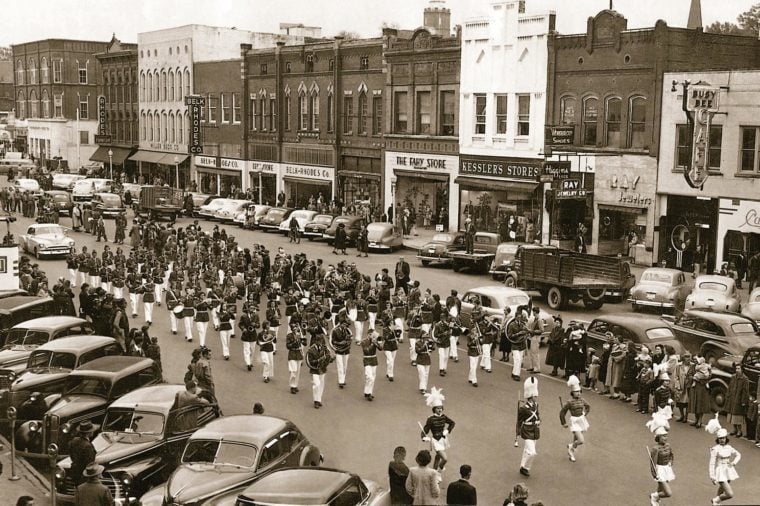 The Rome (Georgia) High School Hilltoppers Band paraded down the town’s main street before football games, says Johnny Davis. If the football team won, the band marched back up the street. Johnny’s wife, Barbara, played the trumpet in the band in 1951, when this photo was taken. 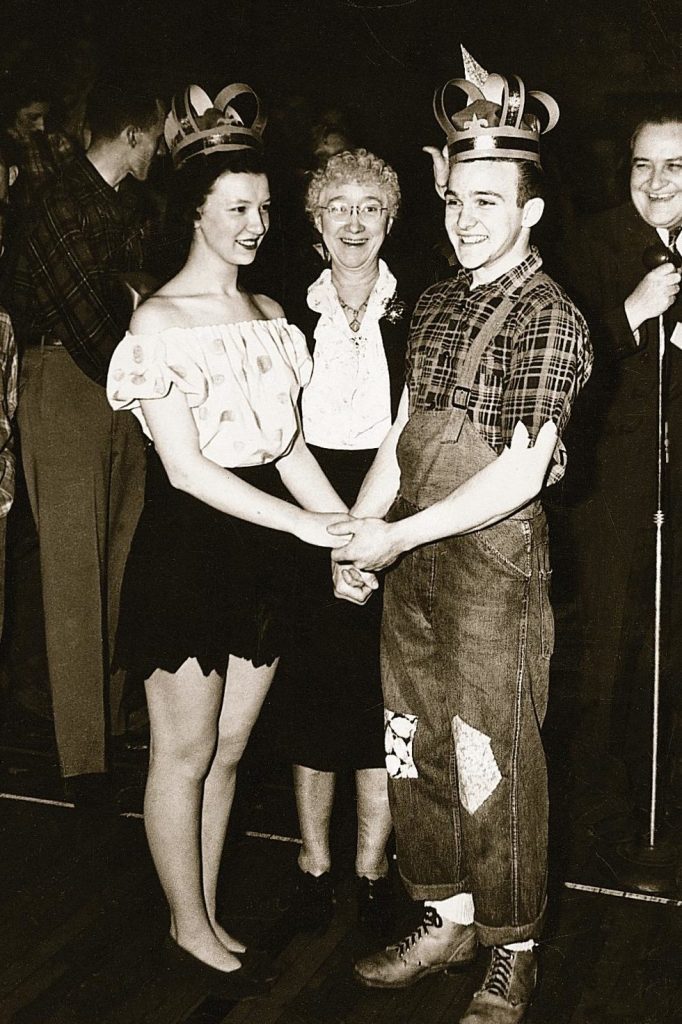 Queen Dottie (Jones) Dunkleberger and King Fred Basehore were the happy couple at a school dance in 1948 at Mechanicsburg (Pennsylvania) High School. Get an inside look at what life was like in the 50s with these vintage photos. 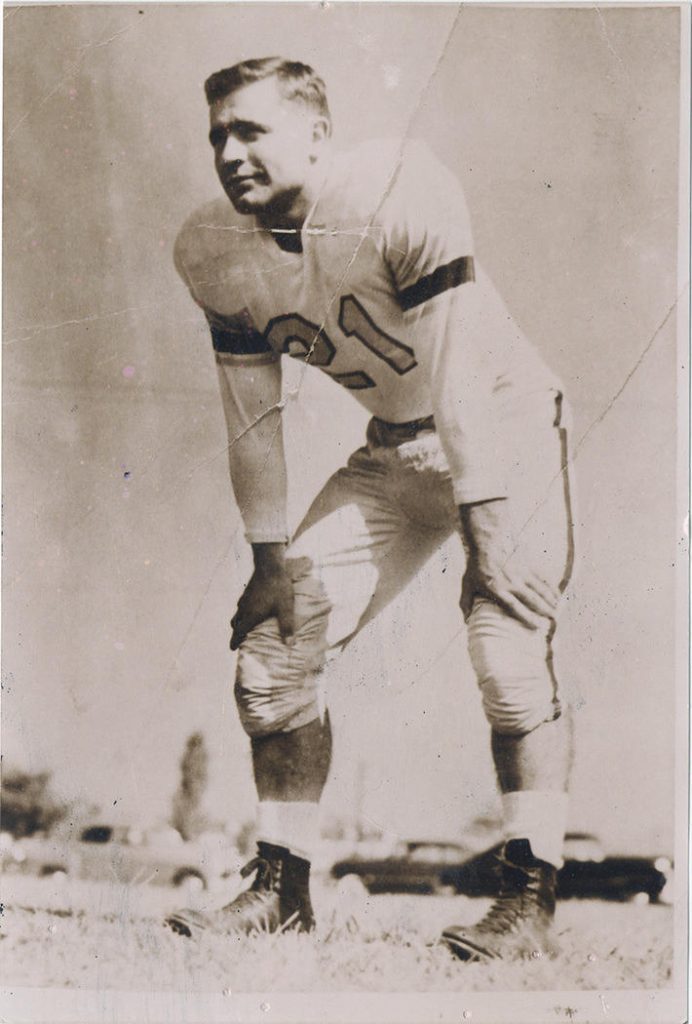 “For my brother Bill, football was life. He played through high school and won a full football scholarship to Albright College in Pennsylvania,” says Peggy Krohto Skiver. 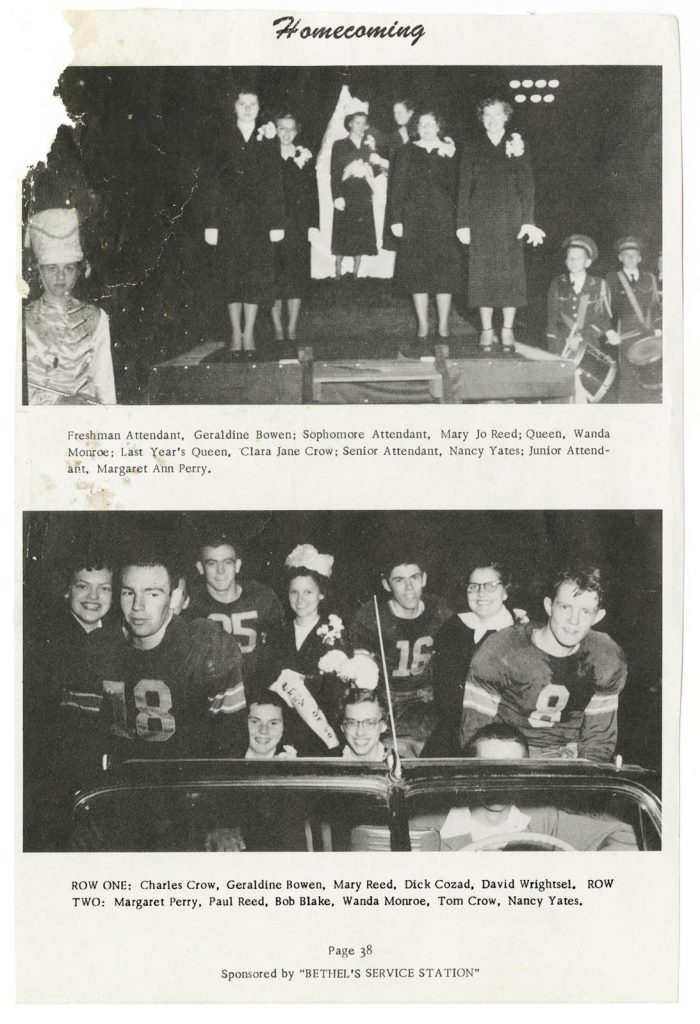 “In 1950, my family had just moved to a new school district in southern Ohio. A few weeks after classes started, I was—to my surprise—nominated for homecoming queen,” says Wanda Spangler. “When the voting was over, I had won. The night of the homecoming game, I sat on a float that was pulled by a convertible. As the convertible pulled out, my throne went backward off the float, and I ended up in a ditch with my suit dirty! Everyone was in a tizzy when I climbed back on the float and told them, ‘Let’s go!’” 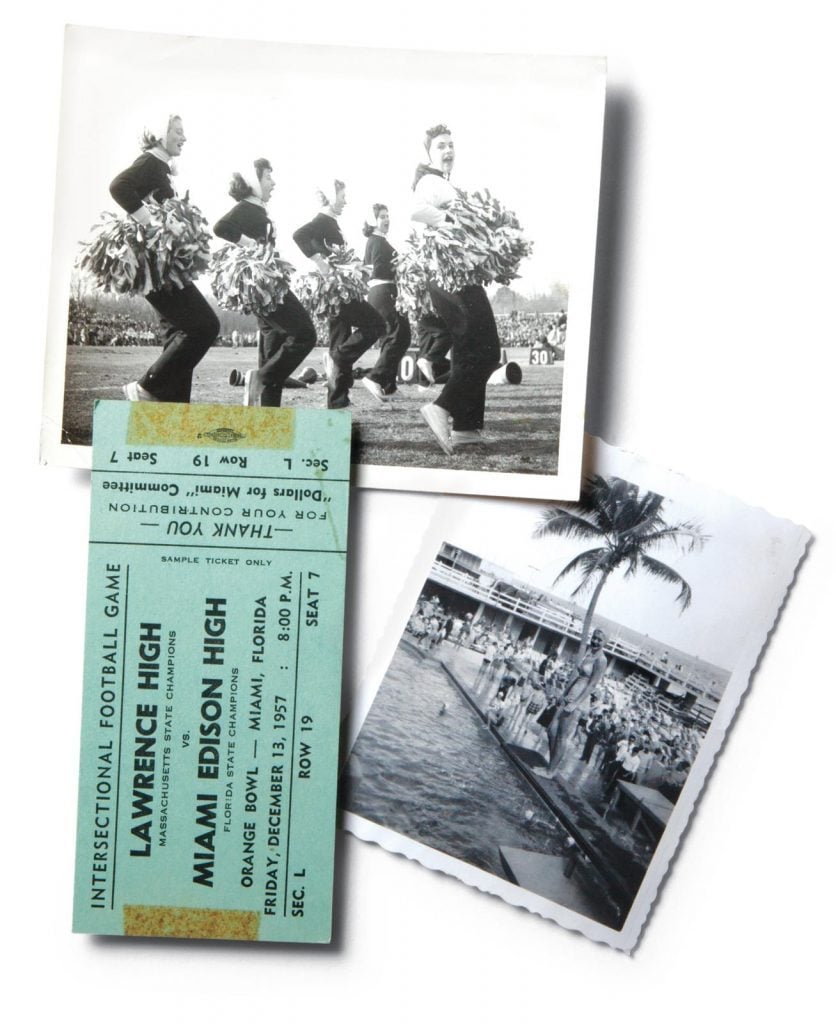 “Football was the single hottest sport in Massachusetts in the 1950s. In the autumn of 1957, when I was a senior and a cheerleader, our high school football team won the Class A State Championship. Everyone involved was invited to Florida to play Miami Edison High in the Orange Bowl,” says Tammy Finn. These are the most glamorous photos from the 50s. 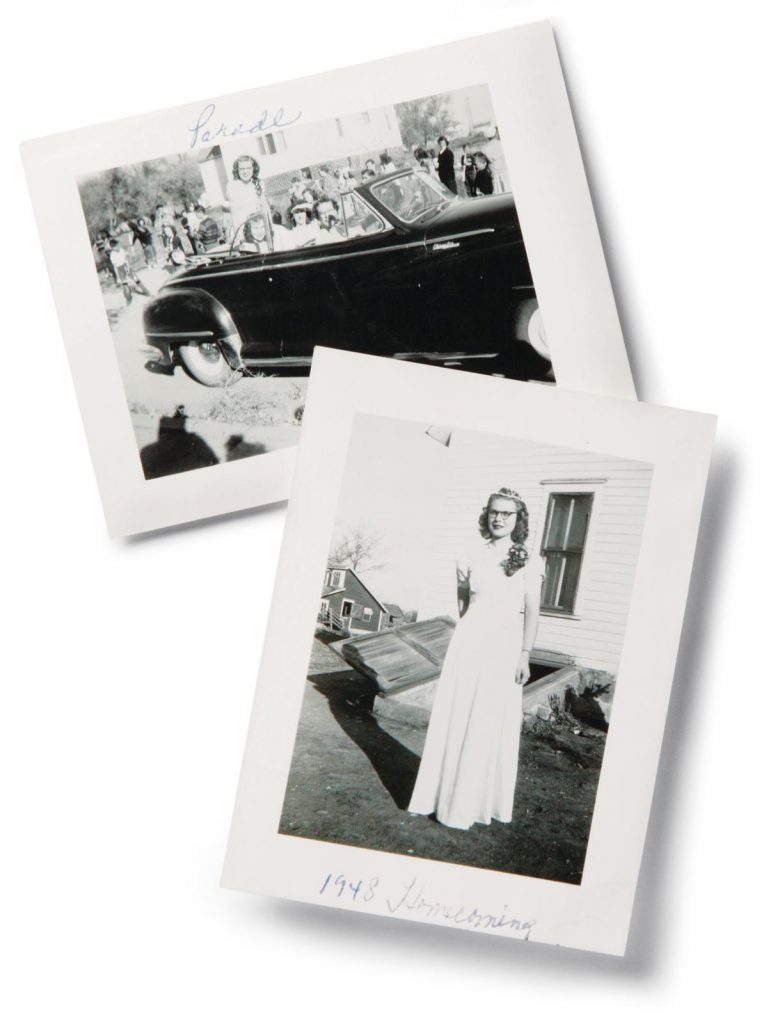 “In October of 1948, the beginning of my senior year at Milroy High School in Minnesota, I was voted homecoming queen. Since I was from a very poor family, I couldn’t afford to buy a formal dress to wear,” says Helen Hollingsworth. “While working in the school cafeteria, I confided in a coworker. Can you believe that her daughter cut off the train of her wedding dress and lent me the gown for the occasion?” 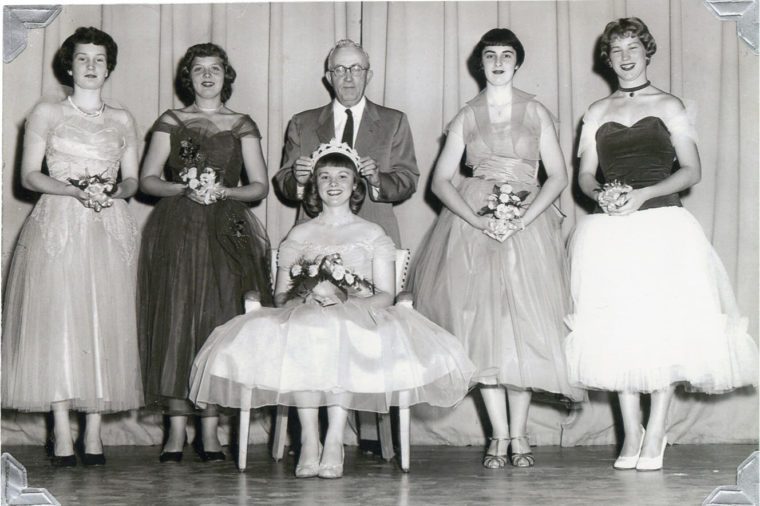 “During the autumn of the 1954 football season, I was a senior at Algonac High School in Michigan. The whole student body looked forward with great anticipation and excitement to the homecoming football game,” says Gail Majors. “After school, while working at the drugstore soda fountain, one of my classmates rushed up to tell me I had been elected queen. For the ceremony, I wore an aqua-blue, chiffon-over-taffeta dress.” 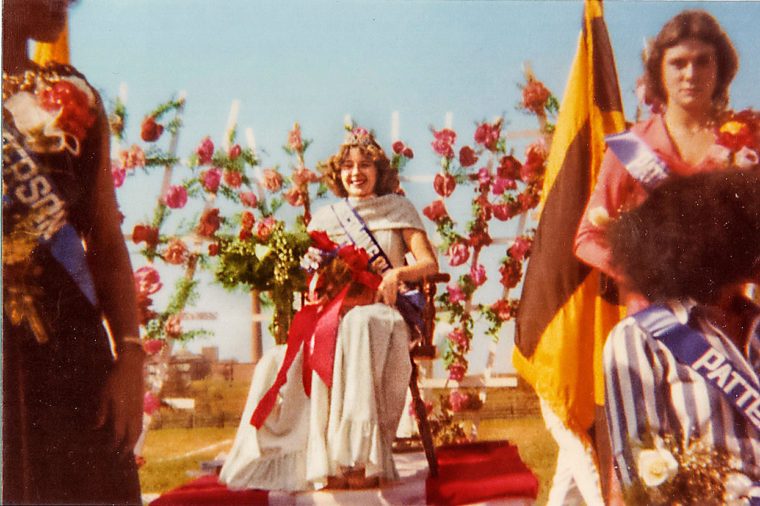 While attending Patterson High School, I was the butt of every joke. I was constantly teased and called ‘chubby.’ I still made a point of being nice to everyone. Then during the summer after junior year, I got a new hairdo and blossomed. All of a sudden people were noticing me. When they made the announcement for homecoming queen, I smiled harder than I ever have in my life,” says Christine Nelson. 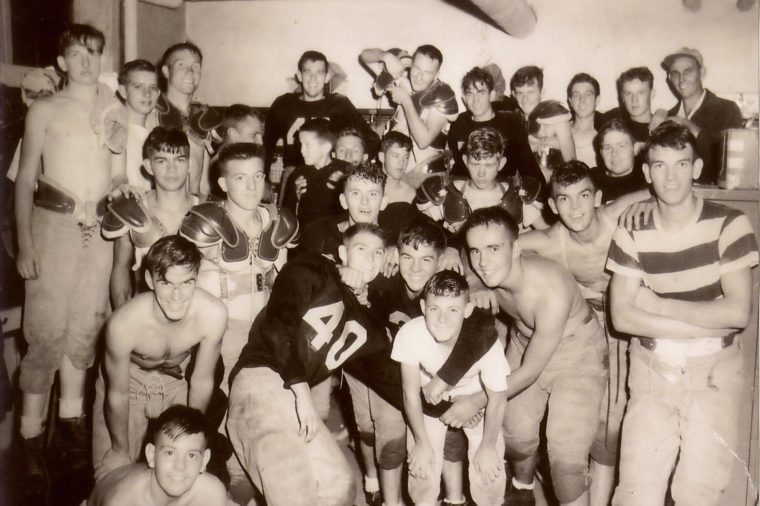 “The Bulldogs football team of Dugger, Indiana, had just defeated Clinton, our arch-rivals, in 1949. We were a happy bunch when this picture was taken in the locker room right after the game. Our team went on to win eight games that year with only one defeat,” says Richard Hiatt. A lot of students probably drove to homecoming in these classic vintage cars.