Not all cats want their space. These cuddly felines are totally into you—and aren't afraid to show their love. 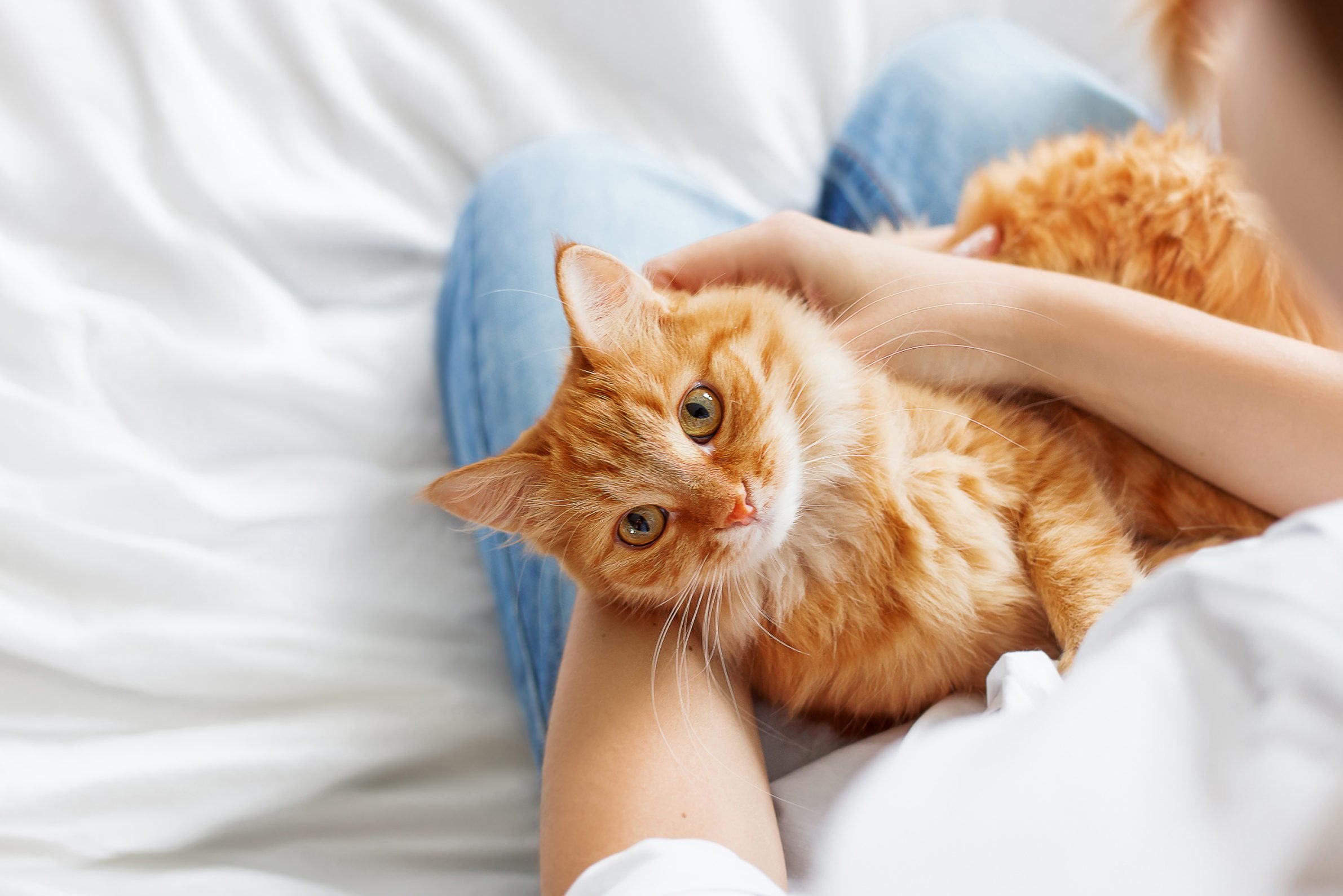 Let’s be honest: Cats have a bit of a reputation. They often seem aloof, and we’re not even sure they like us half the time. They don’t greet us at the door when we come home, and they seem downright moody and uninterested in us—unless we’re opening a can of food. But not all cats are like that. (Really!) Some cats are shamelessly affectionate and rarely leave the side of their favorite human. Teresa Keiger, a judge with the Cat Fanciers’ Association (CFA) who has lived with and shown several cat breeds, is keenly aware of the feline psyche and which breeds are the most affectionate. If you’re looking for a cat who loves to cuddle, these breeds are your best bets. And if you’re more of a dog person, check out the most affectionate dog breeds that love to cuddle. 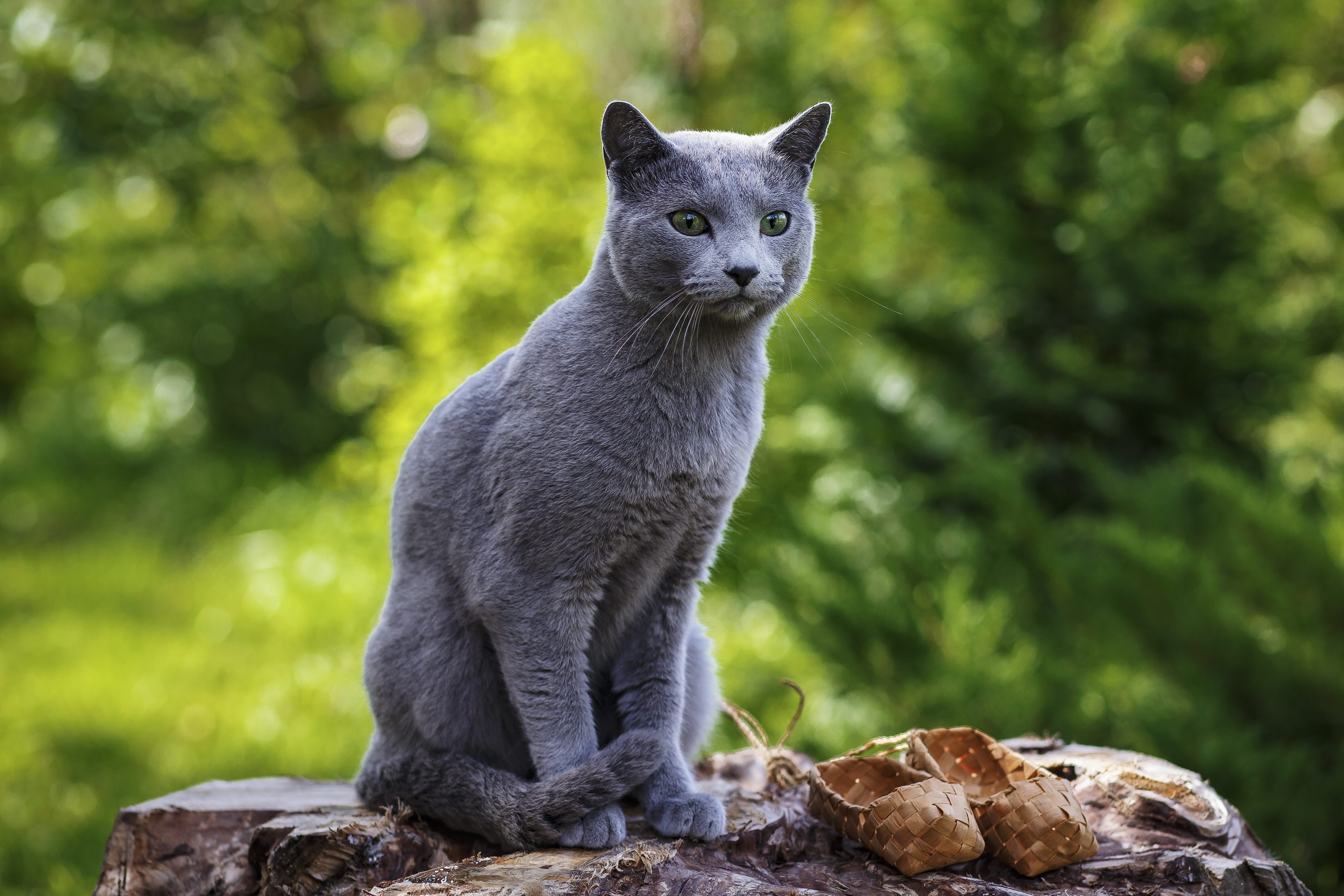 Talk about a head-turner! The Russian Blue’s plush silvery blue coat and piercing greens eyes are positively gorgeous. And though it seems to emit a “look but don’t touch” vibe, Keiger says not to let its aloofness toward strangers fool you. The Russian Blue is acutely perceptive and knows if someone is a friend or foe. “Once a Russian Blue considers you a friend, you’ll never have an empty lap again,” she says. “They bond completely with their owners.” Here’s how you’ll really know if your cat trusts you. 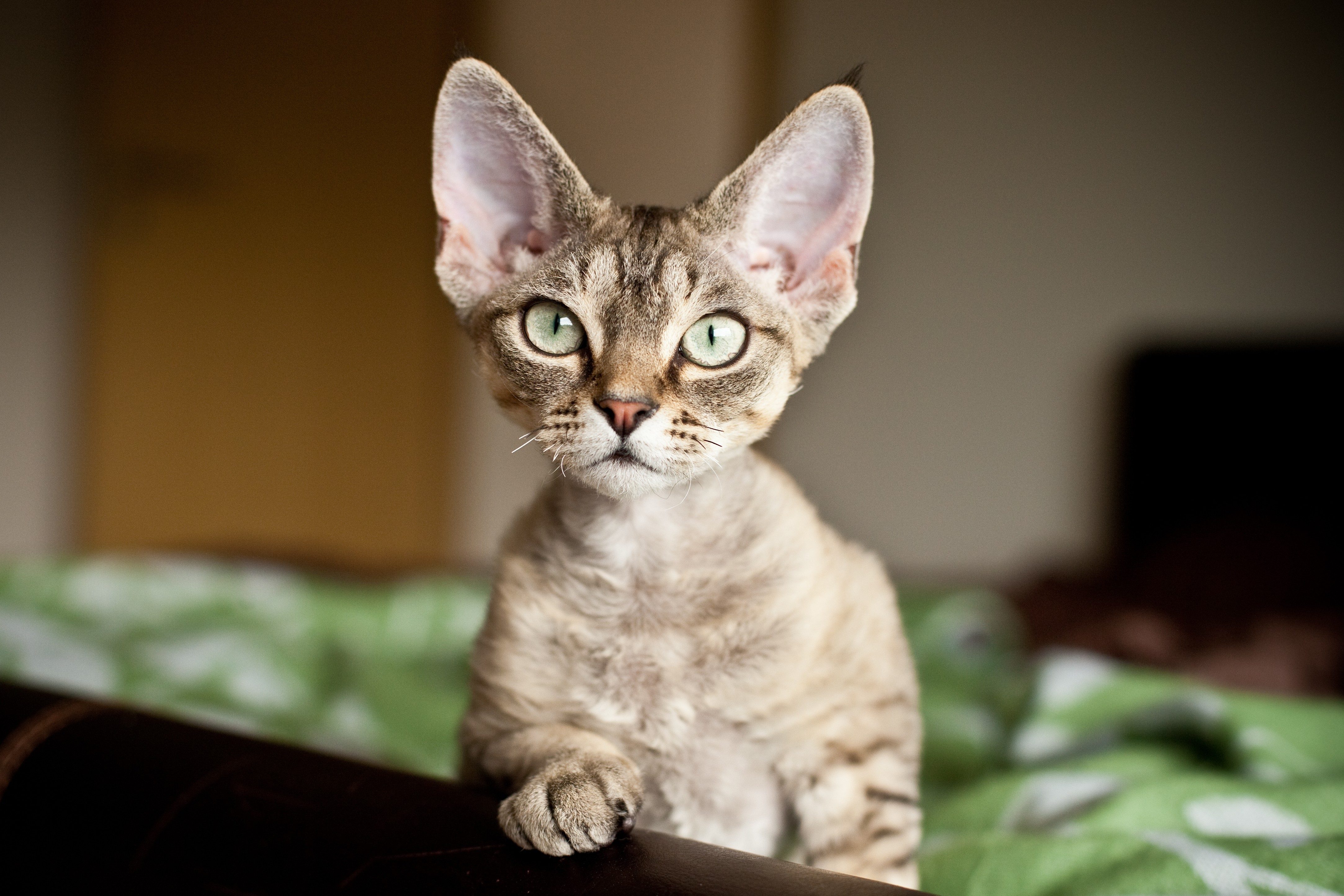 The Devon Rex will never be described as being distant or cold. In fact, its profile would be peppered with adjectives like affectionate, fun-loving, playful, lighthearted, spirited, and prankish. Devons are interested in everything and everyone is their sphere, and they’re happy to be your sidekick all day, every day. They’re just as eager to play games with you as they are to be your permanent body hugger. “They love their owners and really wish to be with them all the time—as in all the time,” says Keiger. Devons aren’t cuddly cats on the block. Check out the cat breeds known for being super chummy. 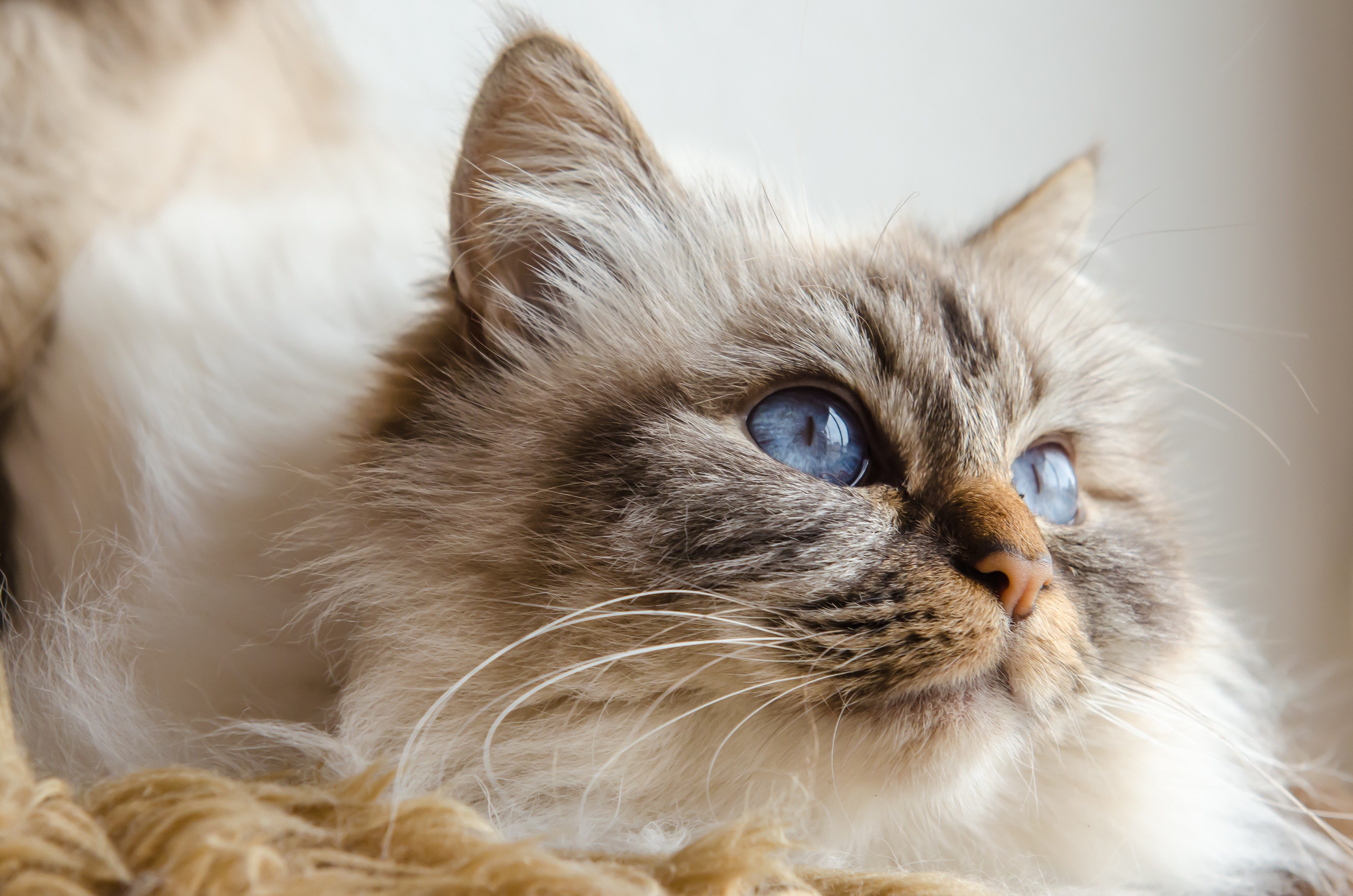 One look and you’re done. Those wistful blue eyes, that cute button nose, and the gorgeous silky coat—how could you not want to cuddle? Luckily, the Birman is totally up for that and will beckon you to the sofa for snuggle time. One of the most famous Birmans out there? Choupette, who was owned by Karl Lagerfeld and acted as the late designer’s muse for a line of feline-inspired accessories. Rumor has it that Choupette had two personal assistants to tend to her every need. For those of us without a team to take care of our feline friends, make sure you know this important info about how to bathe a cat without getting scratched. 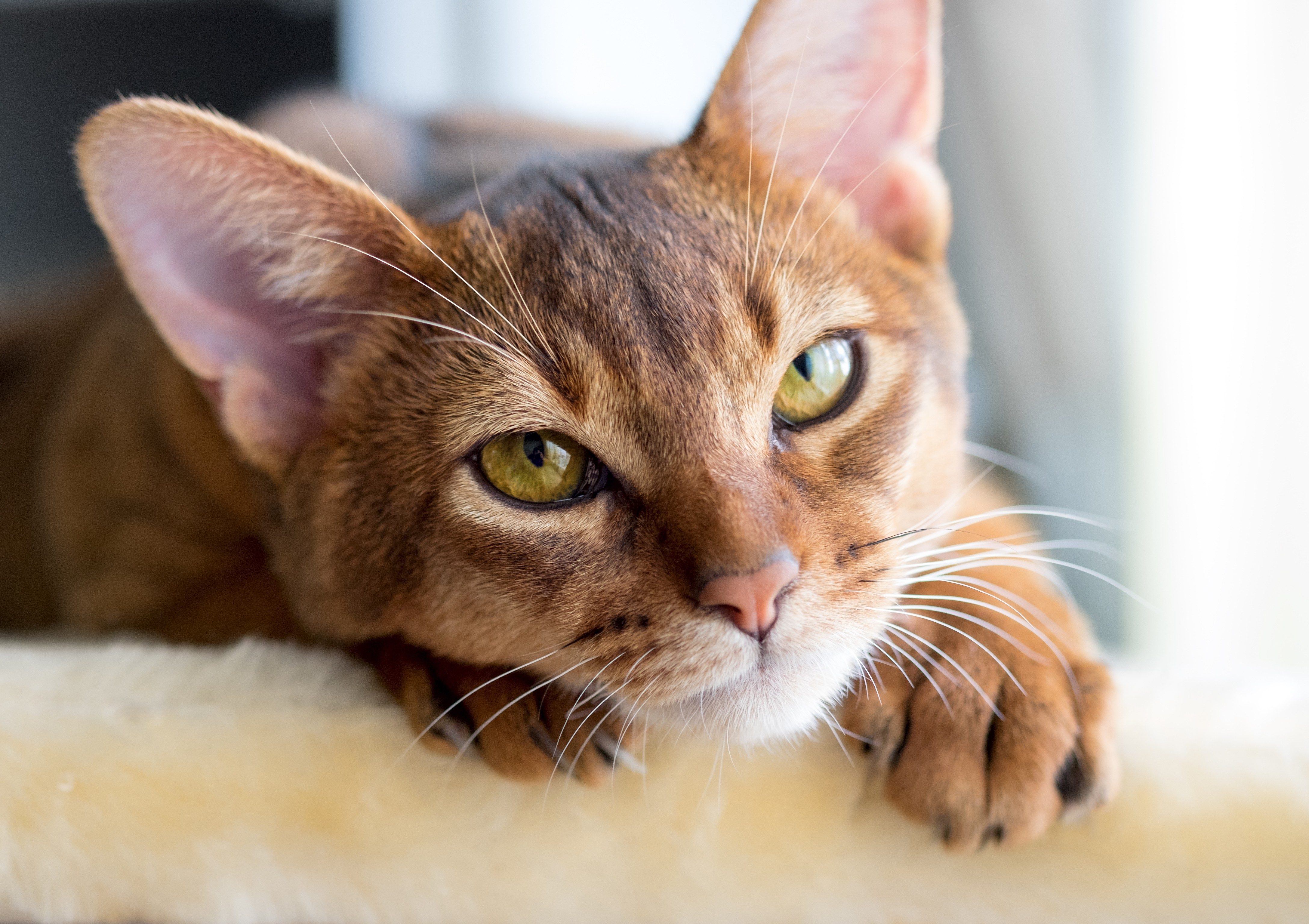 The Abyssinian owns the catwalk. Maybe that’s a little too on the nose, but you can’t deny that the Abyssinian has the cred to pull it off. The Aby possesses an elegant, long, lean muscular physique and an arched neck that emits a supermodel vibe. Yet the Aby’s striking appearance is just one of the appealing things about this breed. These cats are also loyal, loving, and outgoing. “If there were a Miss/Mister Congeniality award for the breed, the Aby would win it,” says Keiger. According to Purina, Abyssinians get along well with cat-friendly dogs, as well as other pets, like large parrots and ferrets. On the other hand, if you put these pet combos together, you’re asking for trouble. 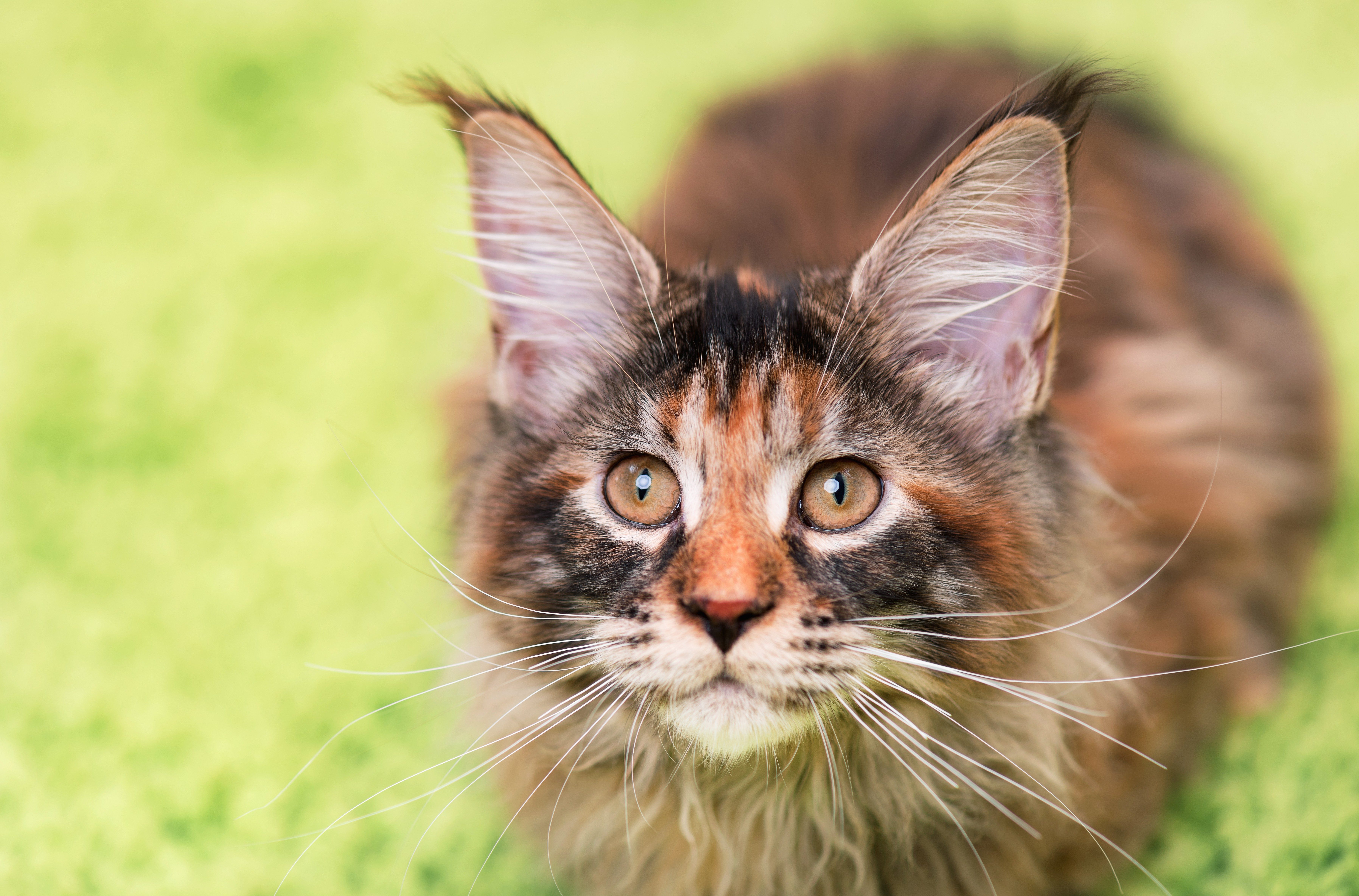 The Maine Coon was first recognized as a specific breed in Maine, where it was named the official cat of the state. That’s a big honor for a giant-sized cat. According to the Veterinary Centers of America, males tip the scales at around 20 pounds and females at about 12 pounds, and they can be almost 40 inches long! But despite their size, they still think they’re tiny kitties. “They truly have no idea of how big they are as they try to ease into your lap or your bed,” says Keiger, whose own Maine Coon acts as her armrest on the sofa every evening. Plus, they are very laid-back and easygoing, she adds. Oddly enough, they even like water and are noted for their raccoon-like ability to scoop up food and water with their paws. In contrast to Maine Coons, here’s why most cats hate water. 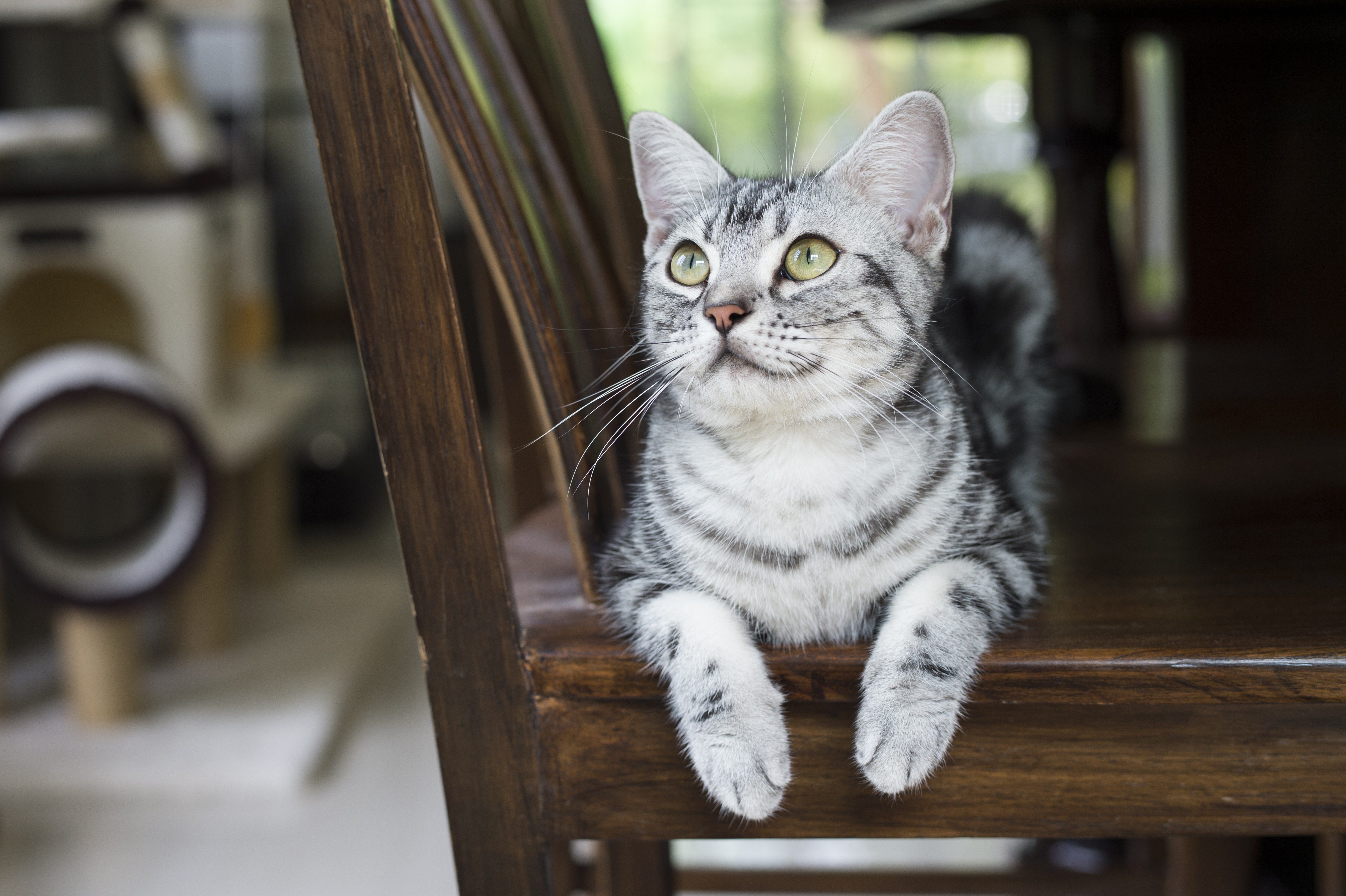 If you’re looking for a family-oriented feline who loves to cuddle in your lap but isn’t always in your face, the American Shorthair may be for you. An added bonus: These adorable cats are also proficient mousers. “The American Shorthair is another breed that’s easy to live with and good in an active household,” says Keiger. “Nothing much bothers them, and they enjoy hanging out with their humans.” Shorthairs can live 15 years or longer when they’re in a nurturing home and eat a quality diet. Speaking of which, veterinarians say these are the best dry cat foods to feed your hungry feline. 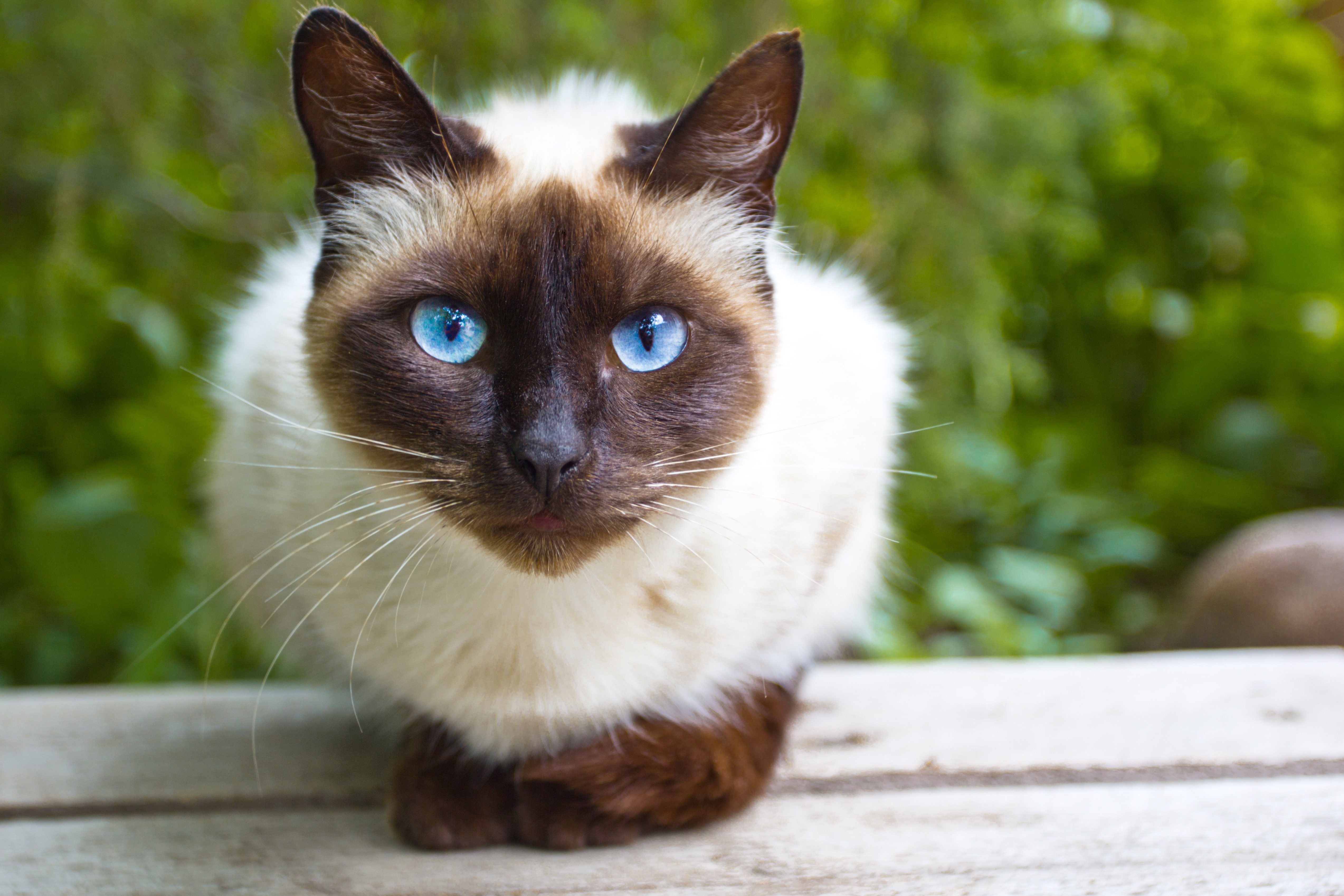 When you think of Siamese cats, you probably think of their deep blue eyes and affinity for “talking” via high-pitched yowling. These cats thrive on companionship and conversation, but are they cuddly cats? “Our Southeast Asian ‘slinky cats’ (including Orientals, Balinese, Javenese, and Colorpoint Shorthair breeds) love to be with each other and with their owners,” says Keiger. “They have the magical trick of being able to slowly slide into your lap, and their loud purrs of contentment convince you that that is exactly where they should be.” Where don’t cats love to be? In a cat carrier. Still, this is where you can work some magic of your own, if you know these tricks to get a cat into a carrier (without getting clawed). 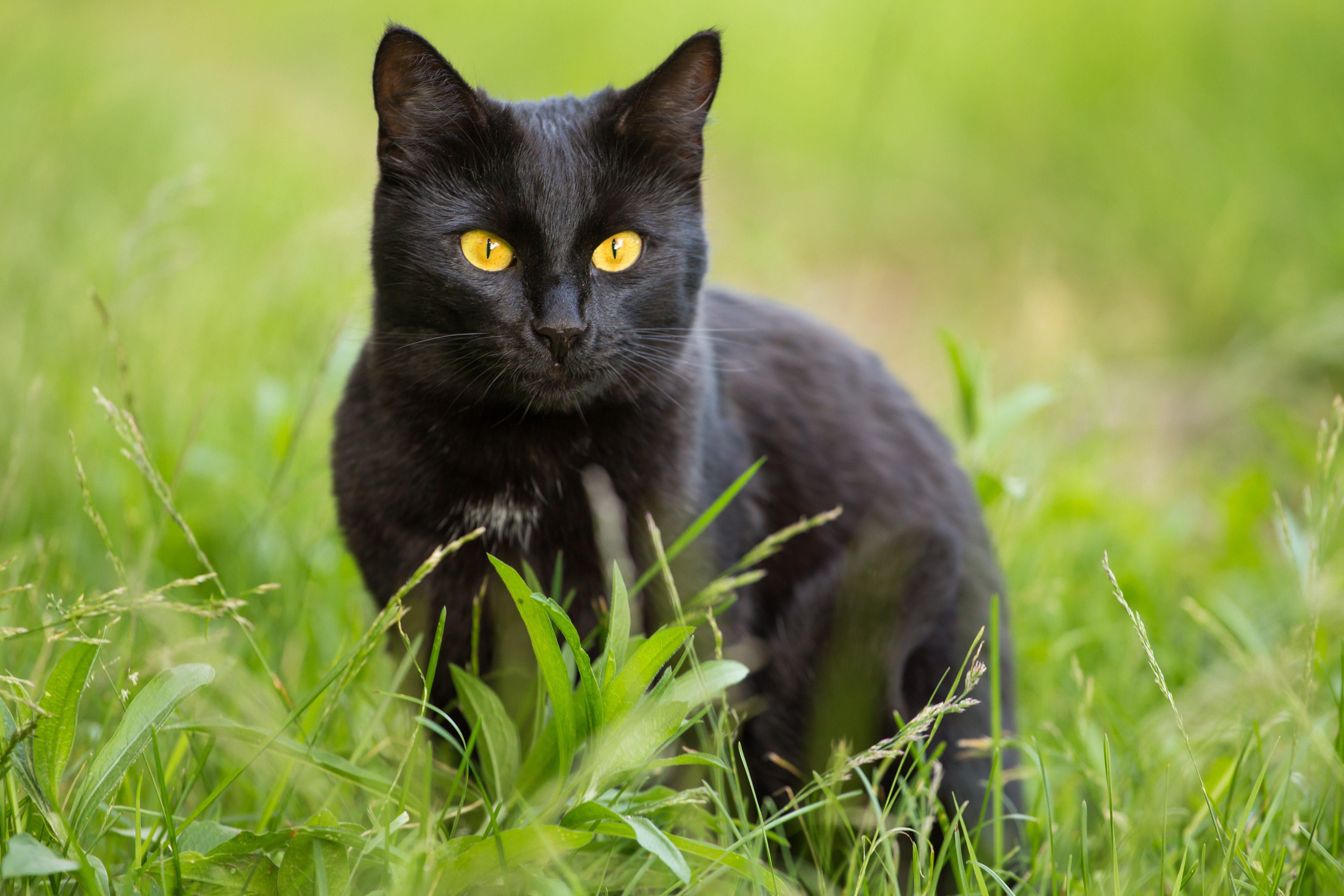 With its glossy black coat and copper-colored eyes, you might think the Bombay originated in an exotic and mysterious location. But believe it or not, the Bombay actually hails from Louisville, Kentucky, according to the CFA. Back in 1958, cat breeder Nikki Horner bred an American Shorthair and a Burmese. The combined genes created a stunning panther-like cat who just happens to be a lover, too. “It gets its wonderful nature from both sides of its family tree,” explains Keiger. “Friendly and outgoing, the Bombay expects you to like him.” But if you need a break from snuggling, These cuddly cats are one of the breeds that can be trained to walk on a leash. 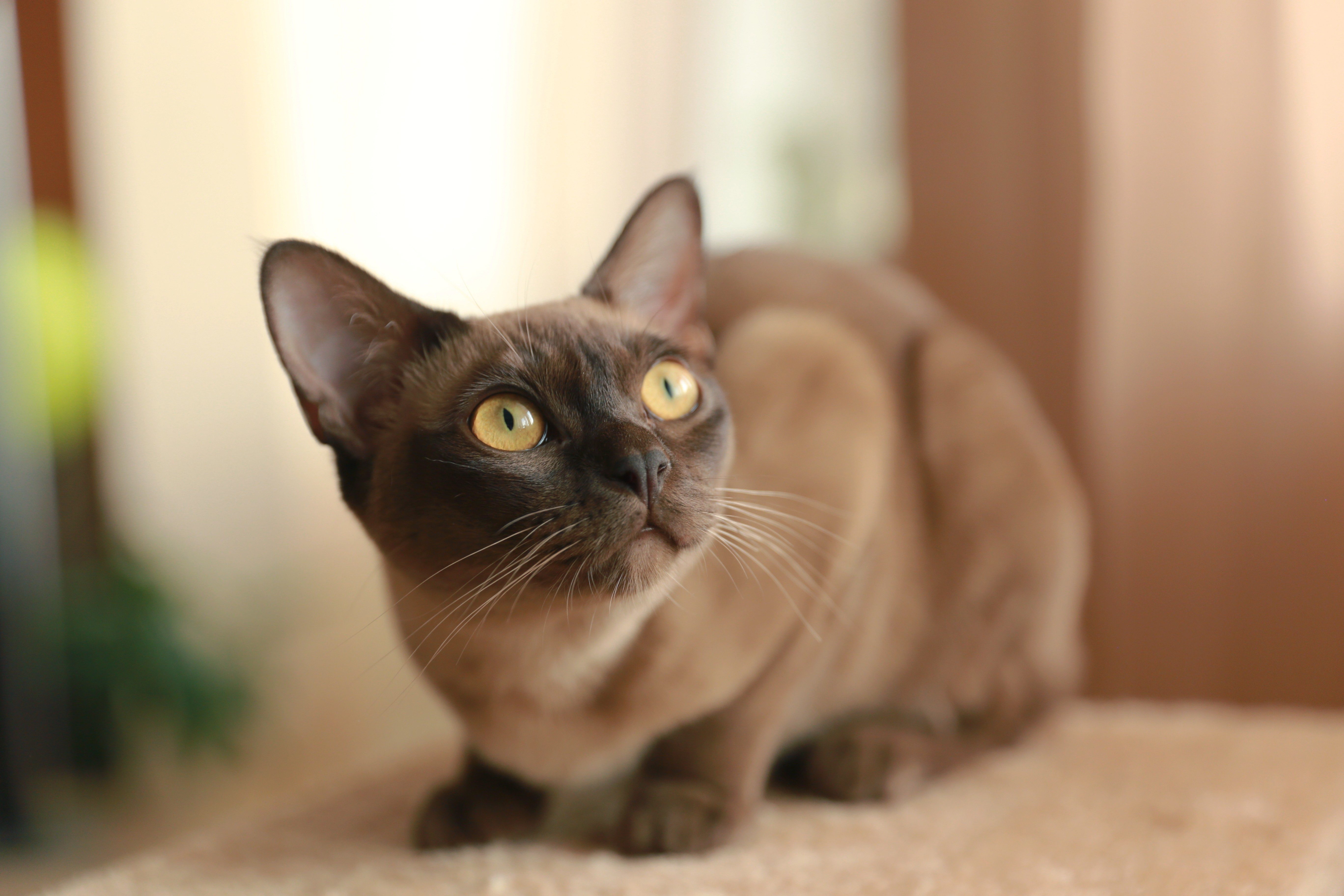 The Burmese is the cat who acts like a Labrador retriever. It loves to play fetch and is super outgoing. And like Labradors, Burmese are highly social and love to have conversations with their humans. Keiger says, “It’s another breed that genuinely wants—no, insists—on being with its owners.” Wherever you go, the Burmese will follow. Unless you have a pill in your hand, that is. Here’s how to lure them back and get them to take their medicine—and actually swallow it. 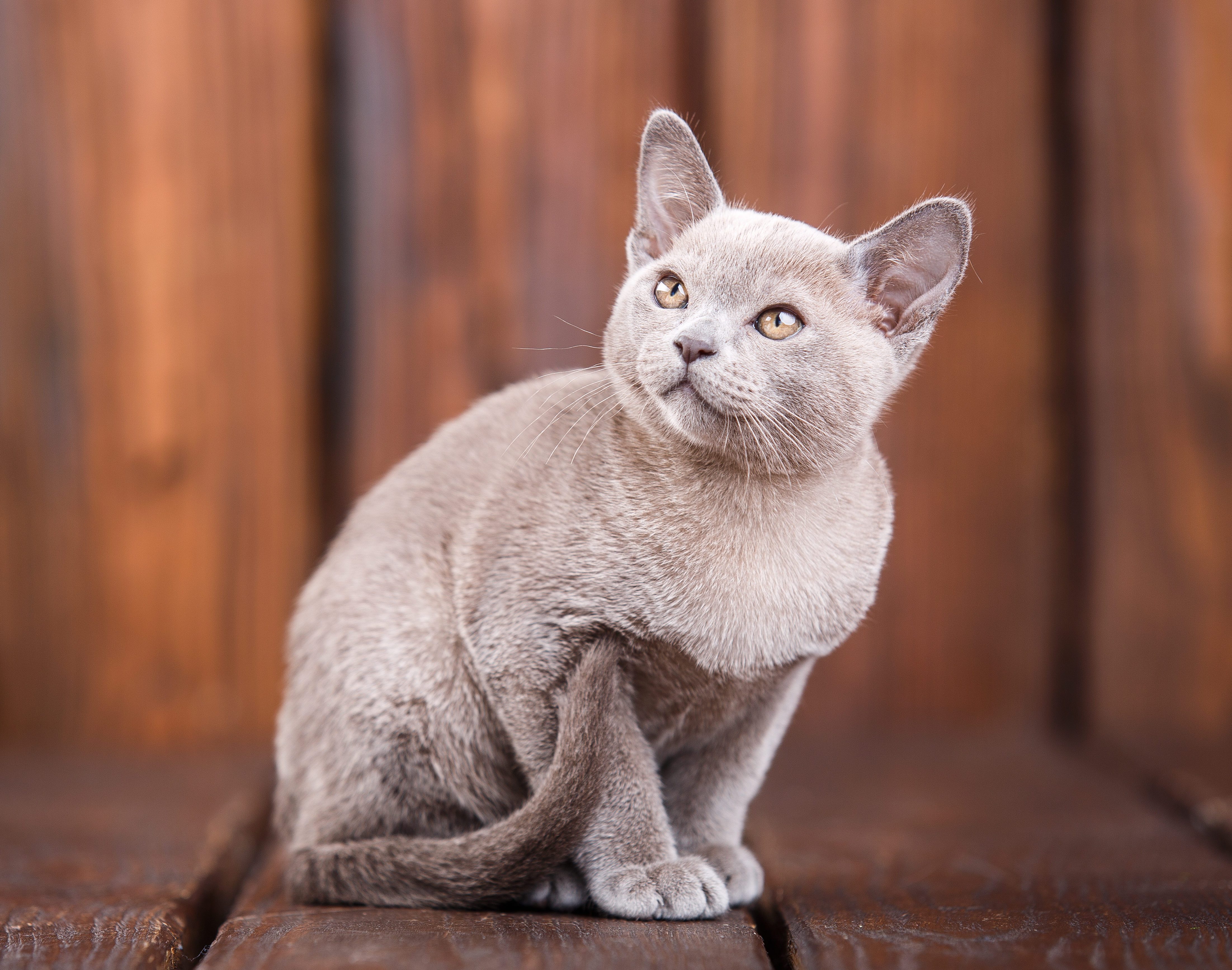 Keiger says the European Burmese has the same big, loving personality as its American cousin—just in a slightly different package. Appearance-wise, the body of the European Burmese is slightly longer with soft curves, as opposed to the American breed, which is more well rounded. Plus, the introduction of the red gene gives the European Burmese a wider variety of colors than its cousin. Both types of Burmese, however, are lovers and snugglers who want nothing more than to be your adoring companions. When your normally cuddly kitty doesn’t feel like cuddling, it could be a sign your cat isn’t feeling well. 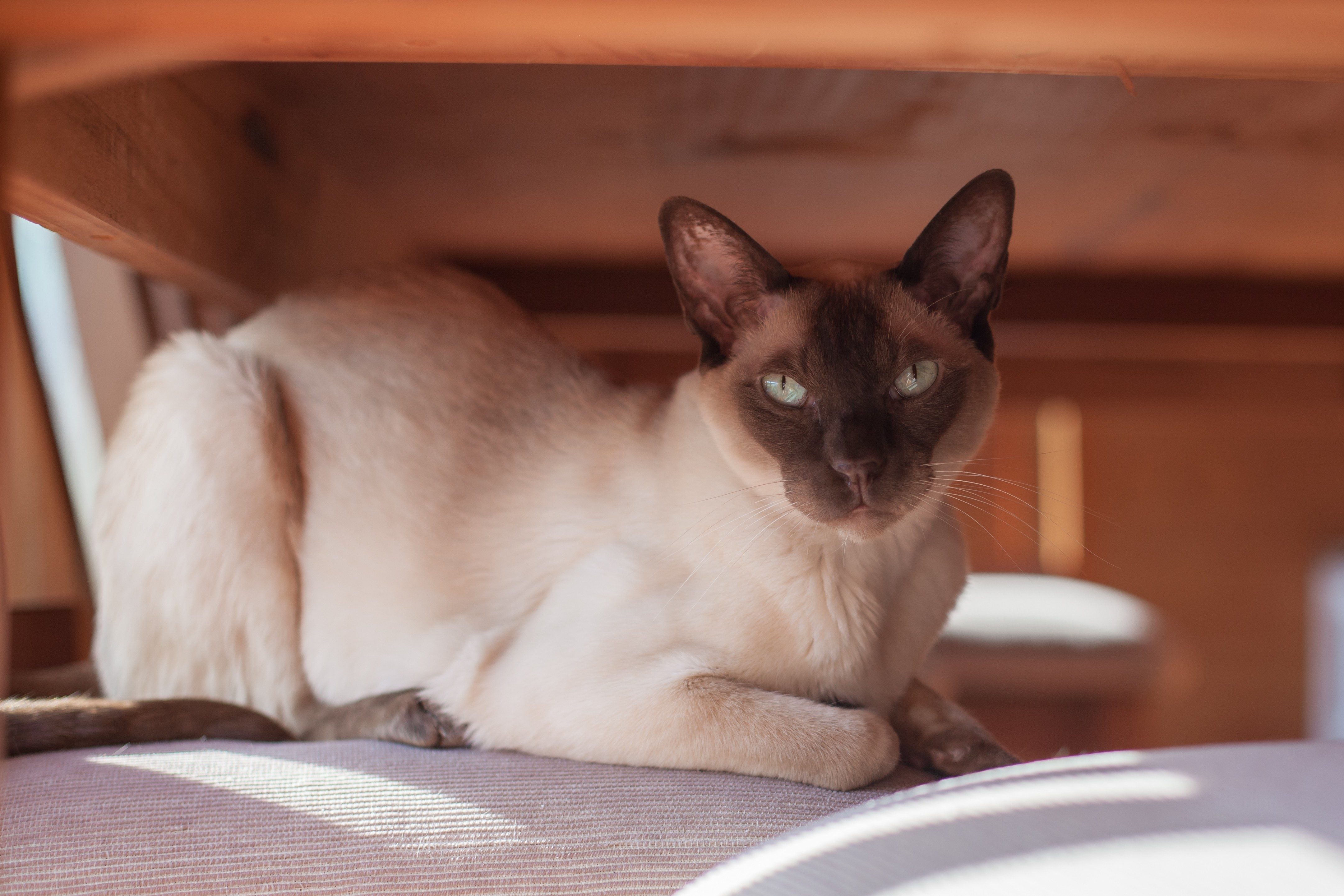 What you lack in social skills, the Tonkinese has in spades. “This cousin of the Burmese has an incredibly outgoing personality, with as much love for their family as visitors,” says Keiger. “They’ll bring the party to the house and serve the snacks. Later on, they’ll curl up with you and tell you all about the day.” Just don’t leave them alone too long or they could get into mischief. They despise being ignored, according to the CFA, and prefer the company of other cats and cat-friendly dogs. Spending time with your fur baby isn’t just fun—it’s also good for you. Check out these 10 incredible benefits of owning a pet. 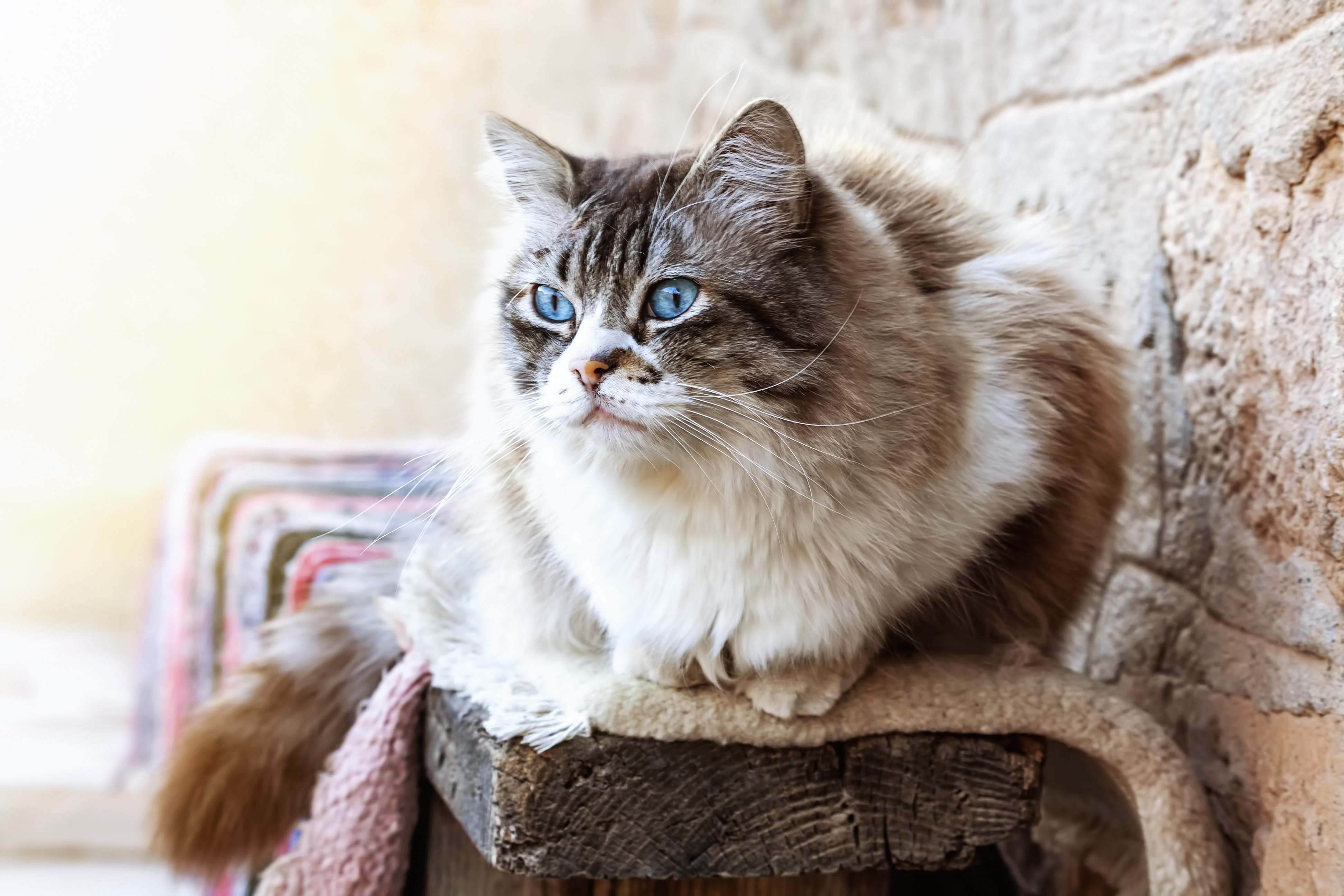 You’ll never hear, “She’s just not that into you,” from someone who has a Ragdoll cat. Female—and male—Ragdolls tend to be more interested in their humans than some other breeds of cats. The mutual fondness goes both ways. It’s easy to get lost in their intoxicating blue eyes and glorious fluffy coat. Underneath that fluffy coat is a hefty cat: Males weigh around 20 pounds. “They’re a large cat, so while they might not prefer to be on top of you, they certainly really want to be with their people,” says Keiger. Unfortunately, there might come a day when something just seems off about your feline. Here are 11 subtle signs your cat is depressed.