12 of the Most Beautiful Post Offices in the United States

Featuring everything from classical architectural styles to New Deal-era murals and sculptures, these post offices across America are surprisingly stunning. 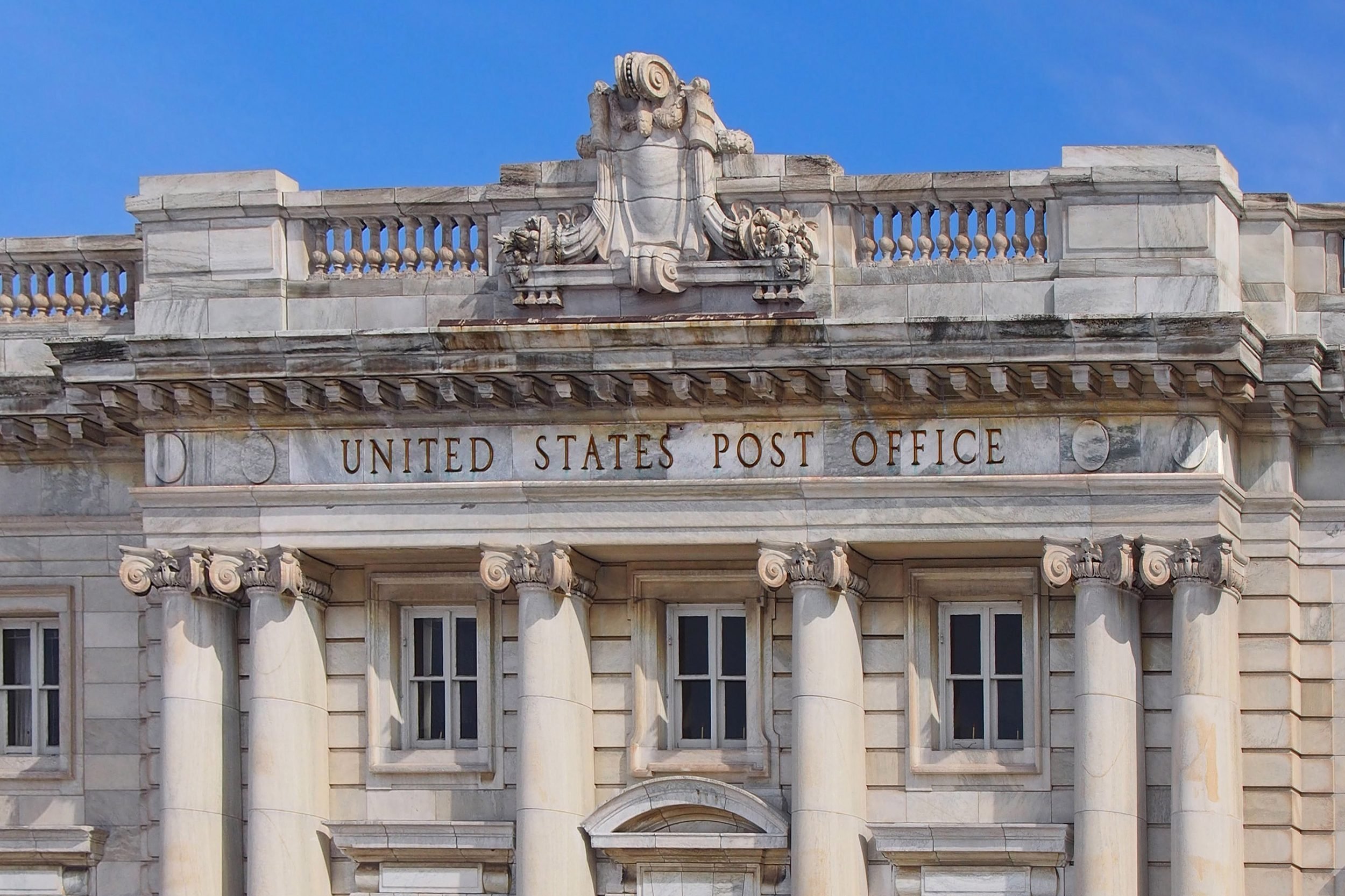 Though the United States Postal Service (USPS) as it operates today was technically founded in 1971, its history goes all the way back to 1775, when the Continental Congress appointed Benjamin Franklin as the first Postmaster General. And it’s not only the institution itself that has a rich history: Post office buildings across the country represent a wide range of styles, ranging from the sleek lines of Art Deco to the classical features of Beaux-Arts to the regional charm of vernacular architecture. In fact, more than 1,400 USPS-owned buildings are currently on the National Register of Historic Places. Though these treasures aren’t necessarily hidden, we may not take the time to appreciate these temples to the mail—including the 1,400-plus murals and pieces of public art commissioned during the New Deal that are located both inside the buildings and on the grounds of post offices.

So, the next time you’re mailing a package or buying some stamps, take a glance around your local post office, recognize its place in American history, and see how it stacks up against these 12 lovely post offices around the country. 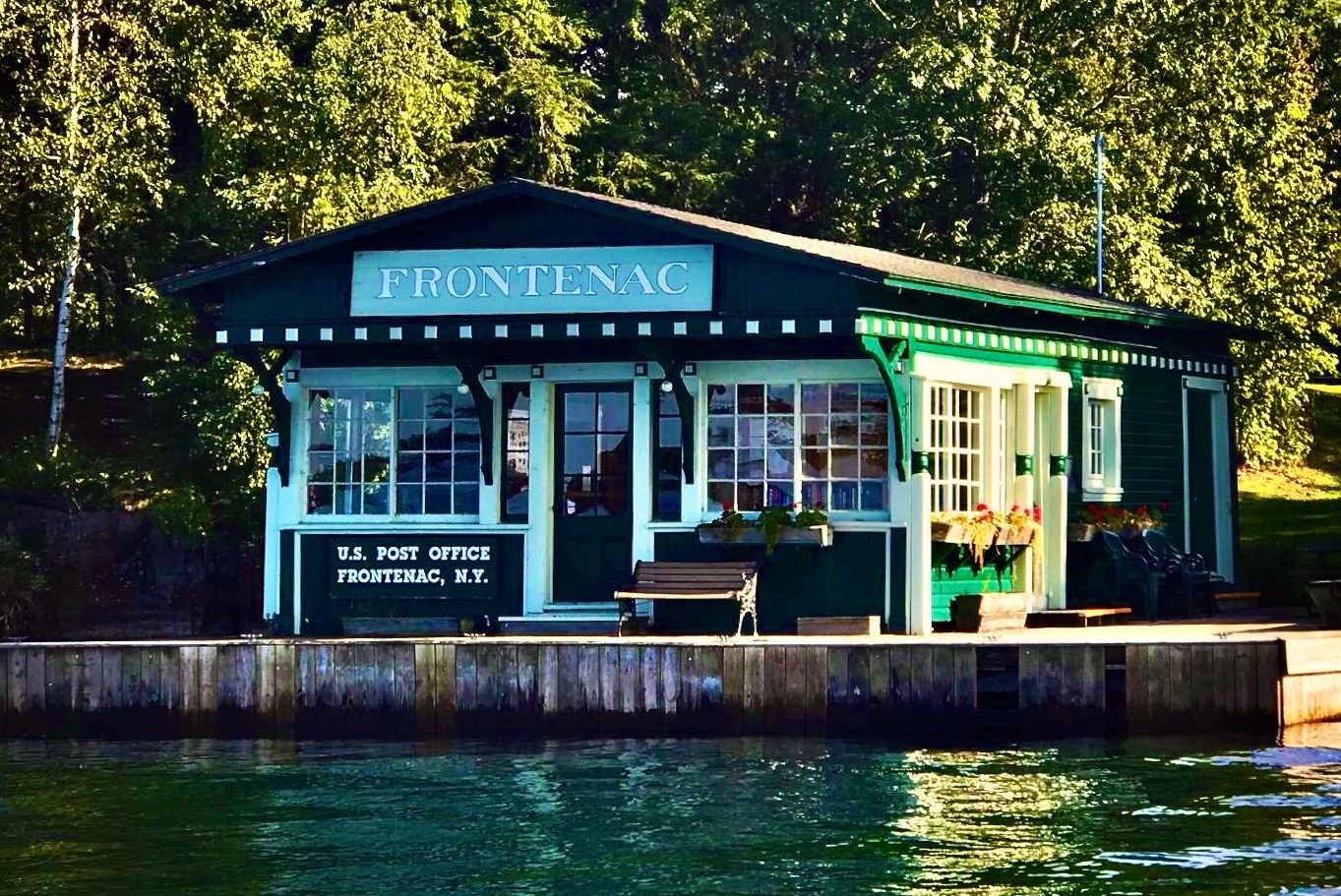 During the Gilded Age, moneyed Manhattanites would make the long train trip north to summer in their elegant “cottages” (don’t be fooled—they were actual mansions) in the Thousand Islands region of New York. As the name suggests, there are numerous small islands on the St. Lawrence River and Eastern Lake Ontario, primarily reachable only by boat (at least until the river freezes over). One of these islands, Round Island, was once home to the luxurious New Frontenac Hotel, which counted J.D. Rockefeller and the Duke of Newcastle among its well-heeled guests. And while the hotel burned down in 1911, its quaint, boat-accessible post office still remains. Though it’s not known precisely when the Frontenac Post Office officially opened, it was sometime between 1878 and 1890. If you love looking at stunning architecture, you won’t want to miss the most beautiful mansion in New York—and every other state. 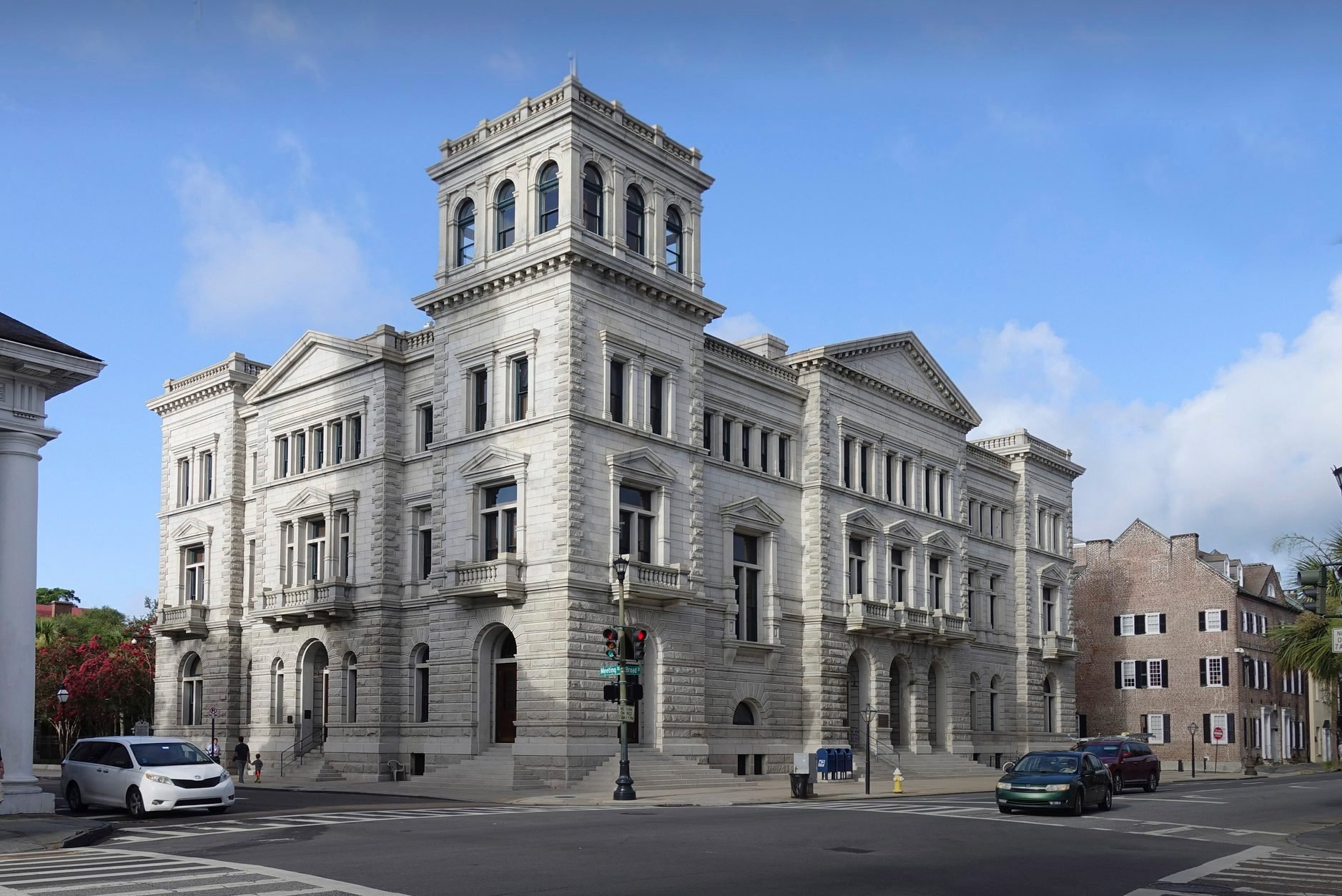 Formerly the site of the gallows for public executions during British rule, the U.S. Post Office and Courthouse in Charleston is located in an area of the city known as the “Four Corners of Law.” Designed by Irish-born architect John Henry Devereux in 1887, the Second Renaissance Revival building wasn’t completed until 1896 for a cost of $500,000. Did you know that the post office is among 10 places that forbid you from taking pictures? 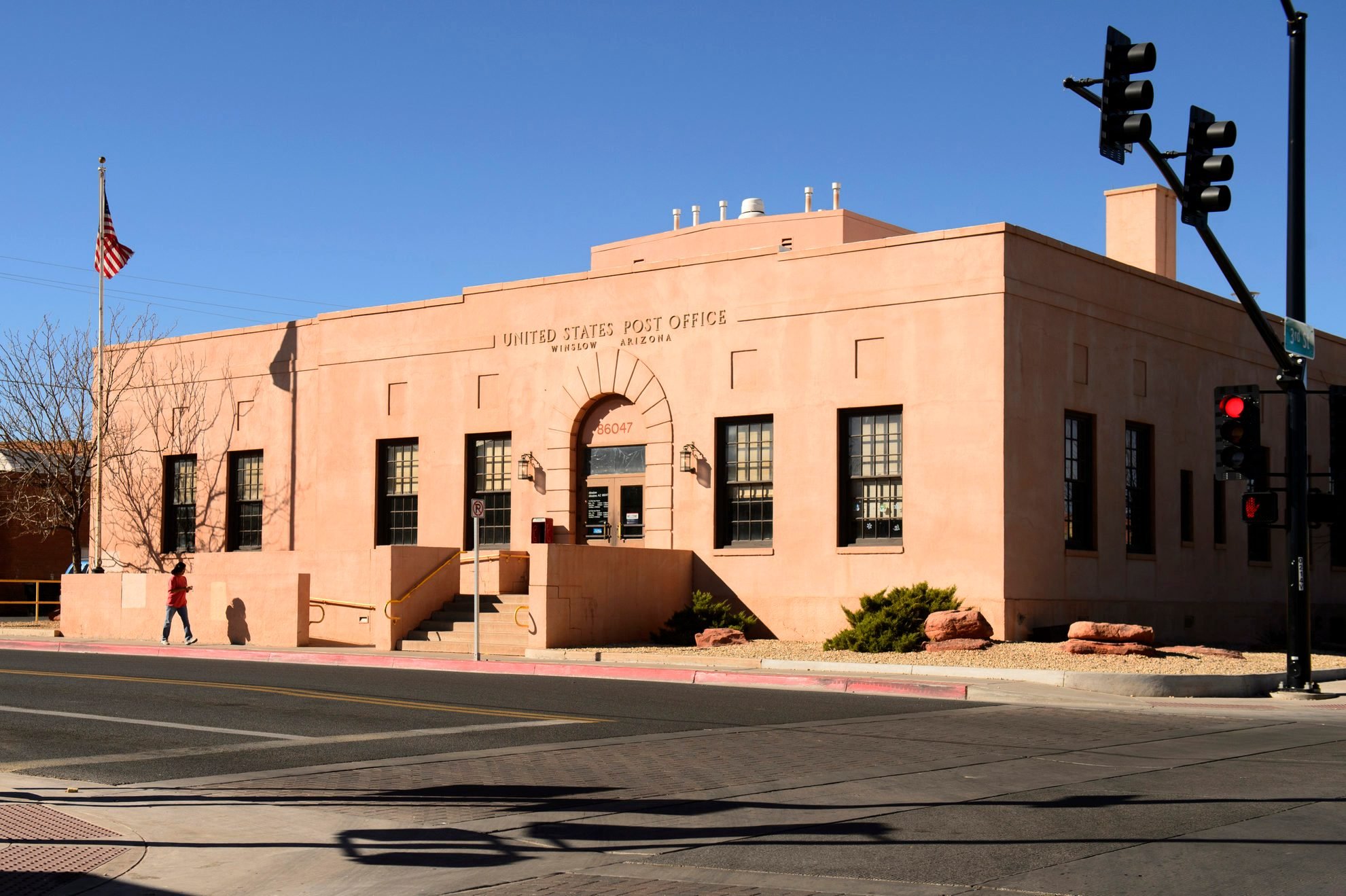 Thanks to the Eagles, standing on the corner in Winslow, Arizona, is a tourist activity. But there’s another corner in town that’s worth a visit, because it’s home to the local post office. But it’s not just any post office: This stucco, Federalist Moderne building was architect Louis A. Simon’s attempt at combining regional architectural styles with some Classical formalism. Completed in 1935, this post office marked the end of the construction of Winslow’s Commercial Historic District. 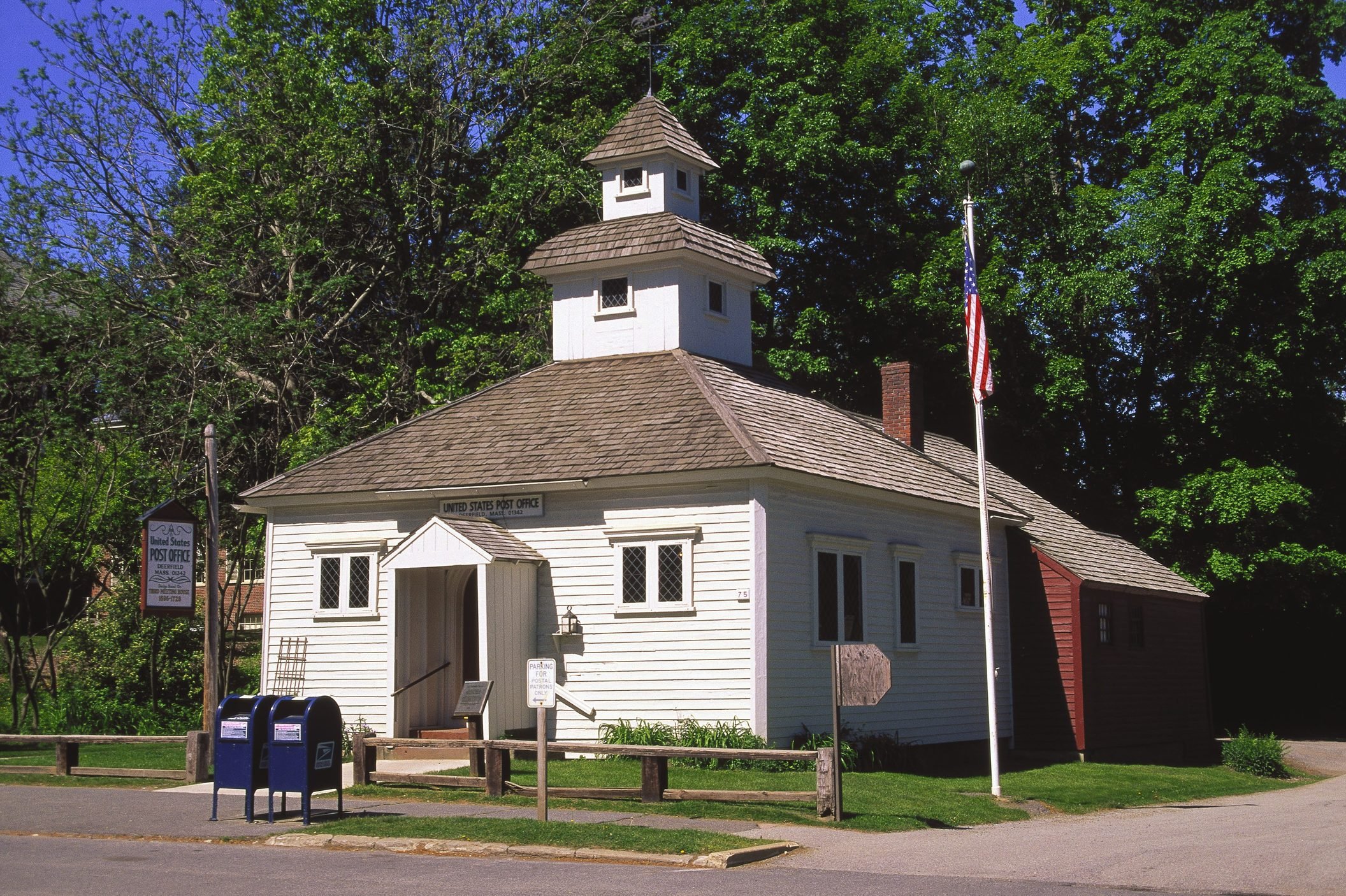 The historic Massachusetts post office was built in 1912 in the Colonial Revival style. But it would be another 40 years before Henry N. Flynt remodeled it to resemble the town’s 17th-century meeting house. Since then, it has been one of the most recognizable buildings in Historic Deerfield, and it remains a functioning post office. In case you were wondering, this is what could happen if the USPS stopped delivering mail. 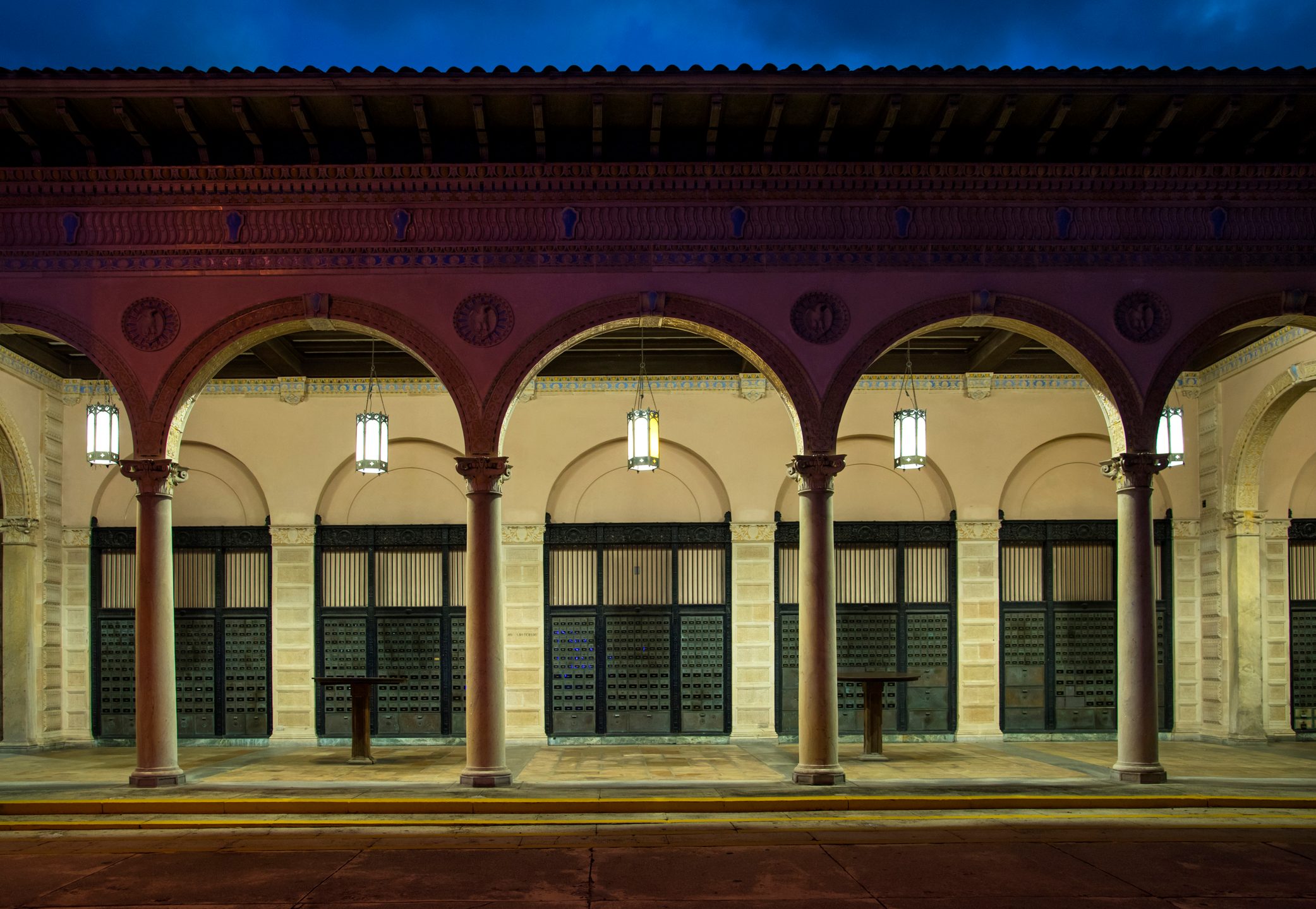 When it was dedicated in 1917, the St. Petersburg post office was the country’s first open-air post office, and it has remained in continuous operation ever since. With assistance from architect George W. Stewart, the city’s postmaster, Roy Hanna, designed the Mediterranean Revival–style building, which was inspired by a 15th-century hospital in Florence, Italy. 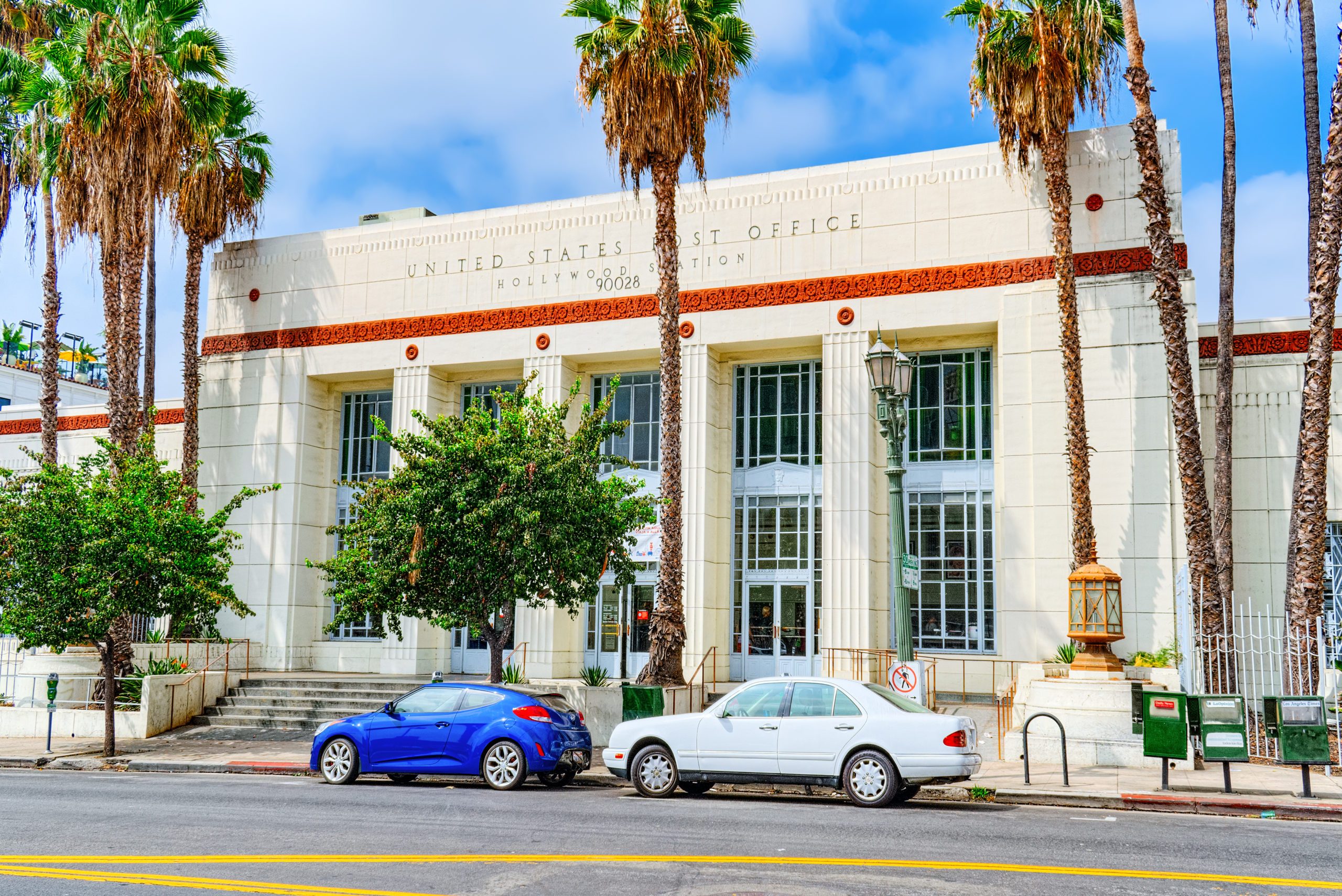 Out of all the beautiful post offices in America, the one at Hollywood Station in Los Angeles may be the most glamorous. The National Register of Historic Places considers it “an almost archetypal example” of the Starved Classicism architectural style, making the post office stand out amongst the Art Deco buildings in L.A. by being classical but with a modernist twist. Renowned Art Deco architect Claud Beelman, then a partner at Curlett + Beelman, designed the building, which was built using funds from the Treasury Department as part of the New Deal; it opened in 1937. Hollywood Station is also known for being a “dead letter repository” for notes sent to Hollywood royalty like Judy Garland and Clark Gable. By the way, here’s what your mail carrier knows about you. 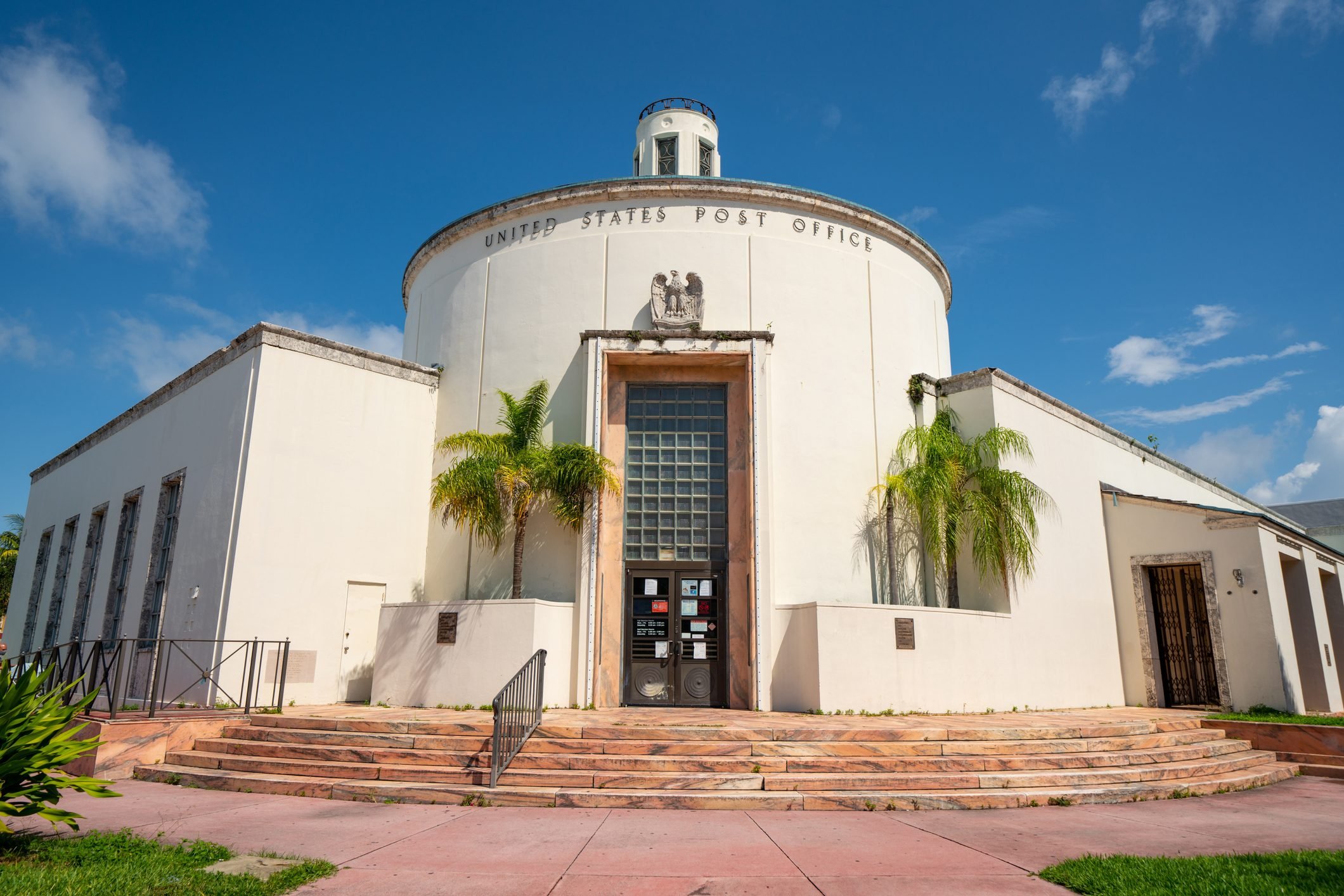 The historic Miami Beach Post Office is one of the most iconic buildings in the city, featuring a combination of Art Deco and Depression Moderne architecture that’s sometimes referred to as “Deco Federal Style.” Designed by architect Howard L. Cheney and built by A.F. Blair, the post office was constructed with Treasury Department funds as part of the New Deal. The inside of the post office is equally impressive, featuring three murals depicting “Episodes from the History of Florida,” painted in 1940 by Works Progress Administration artist Charles Russell Hardman. If you’re in the Sunshine State, you should also check out these amazing Florida beaches locals want to keep secret. 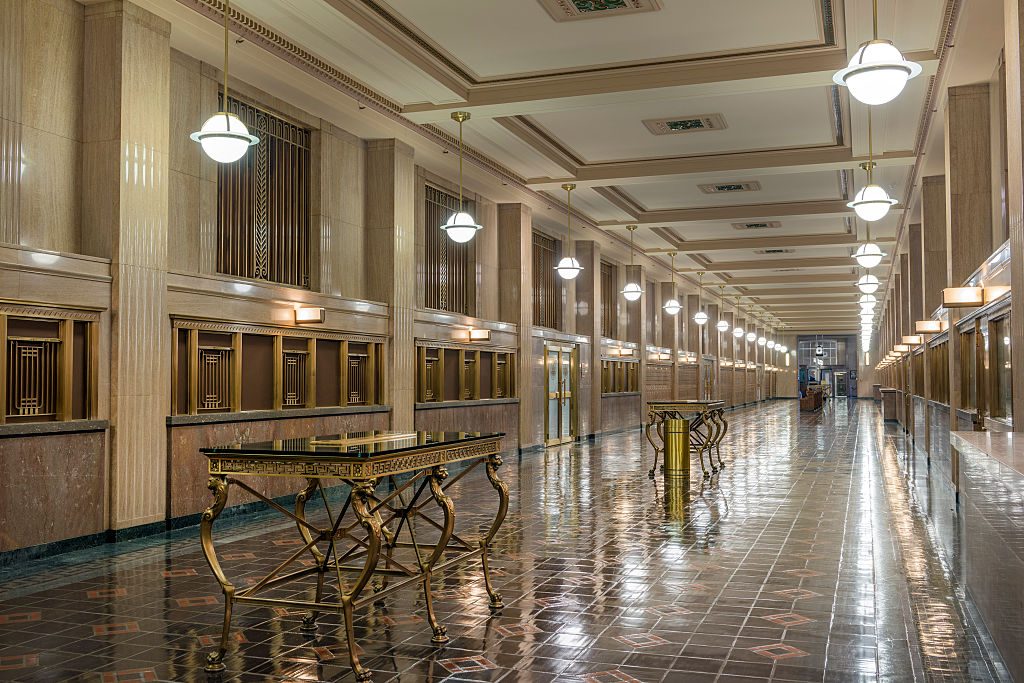 Located in historic Fountain Square in downtown Cincinnati, the Art Moderne–style Potter Stewart United States Post Office and Courthouse replaced the city’s previous federal building. Thanks to Cincinnati’s growing immigrant population and the government services they required, the city outgrew its original structure, which was completed in 1885. Its replacement—designed by architect Louis A. Simon and completed in 1939—was built using structural steel and reinforced concrete, with the exterior walls covered in limestone. Libraries are also some of the most stunning structures around. Discover the most impressive library in every state. 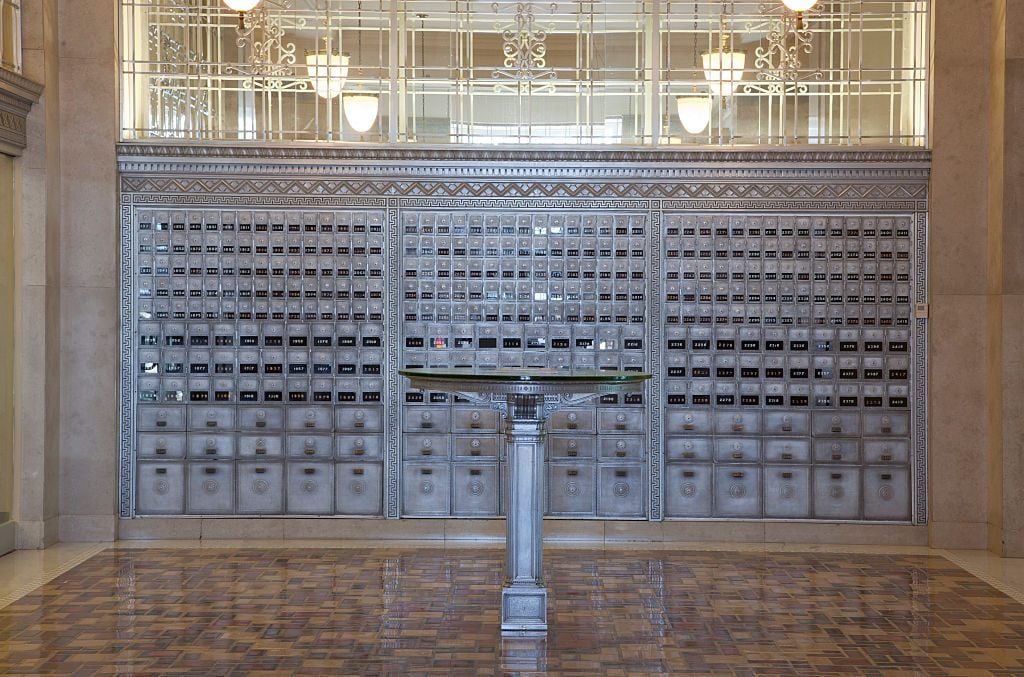 The population of Little Rock grew significantly at the beginning of the Great Depression, as families from hard-hit rural areas moved into the city. A much larger post office was required to meet the needs of the expanding community, and the city secured funding that was part of the New Deal. Supervising architect James A. Wetmore oversaw the design of the five-story limestone Classical Revival–style federal building, which opened in 1932. Don’t miss these small towns with beautiful architecture. Construction on the U.S. Post Office and Courthouse in Camden, New Jersey, began in 1931 and was completed a year later. Louis A. Simon, an MIT-trained architect, designed the building, which is an example of Neoclassical federal architecture through a Modernist lens. The post office also has some Spanish Revival elements, including the original Mission tile roof, and the interior’s multicolored quarry tile wainscot and floor tile treatment. On top of that, there are Art Deco features in the interior, like the ornate entrance doors, transom windows, and metal grillwork. 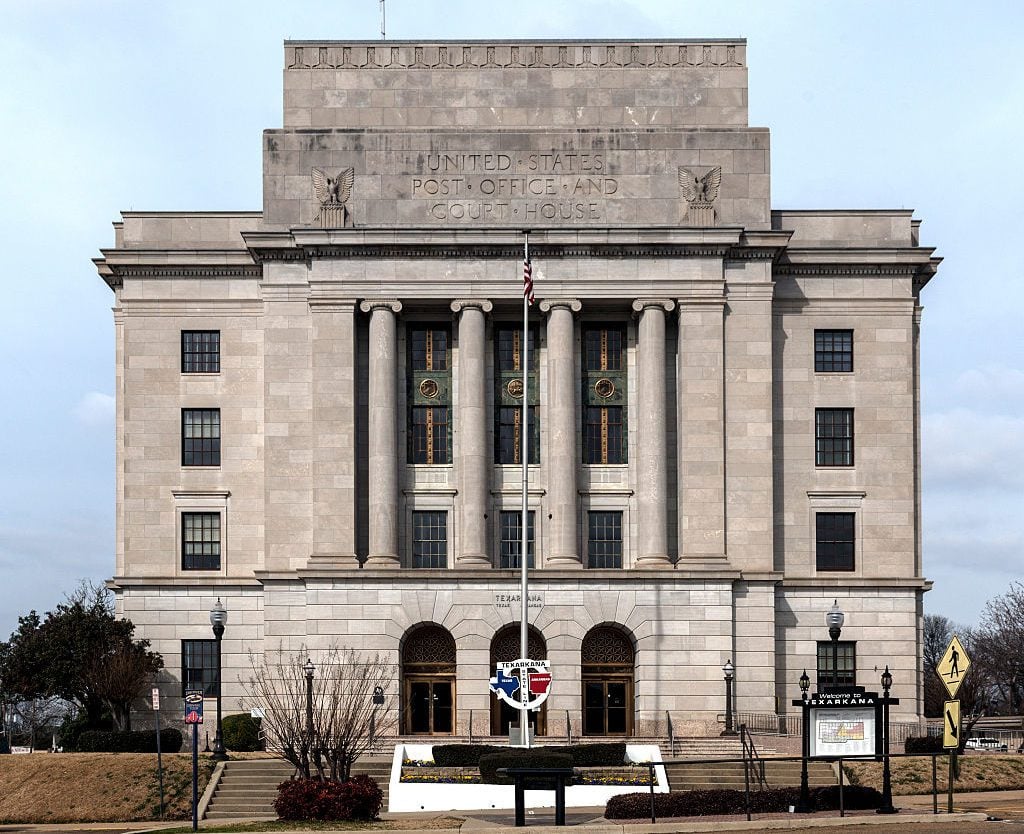 Not only is the Texarkana post office an architectural stunner, combining elements of both Beaux-Arts and Art Deco design, but it’s also the only federal building in the country to straddle two different states (Texas and Arkansas). Two architectural firms—Witt, Seibert & Halsey of Texarkana, in association with Perkins, Chatten & Hammond of Chicago—collaborated on the building’s design. Though it was built during the Great Depression and opened in 1933, it predates the New Deal, instead receiving funding allocated under the 1926 Public Buildings Act. Find out what mail delivery looked like 100 years ago. 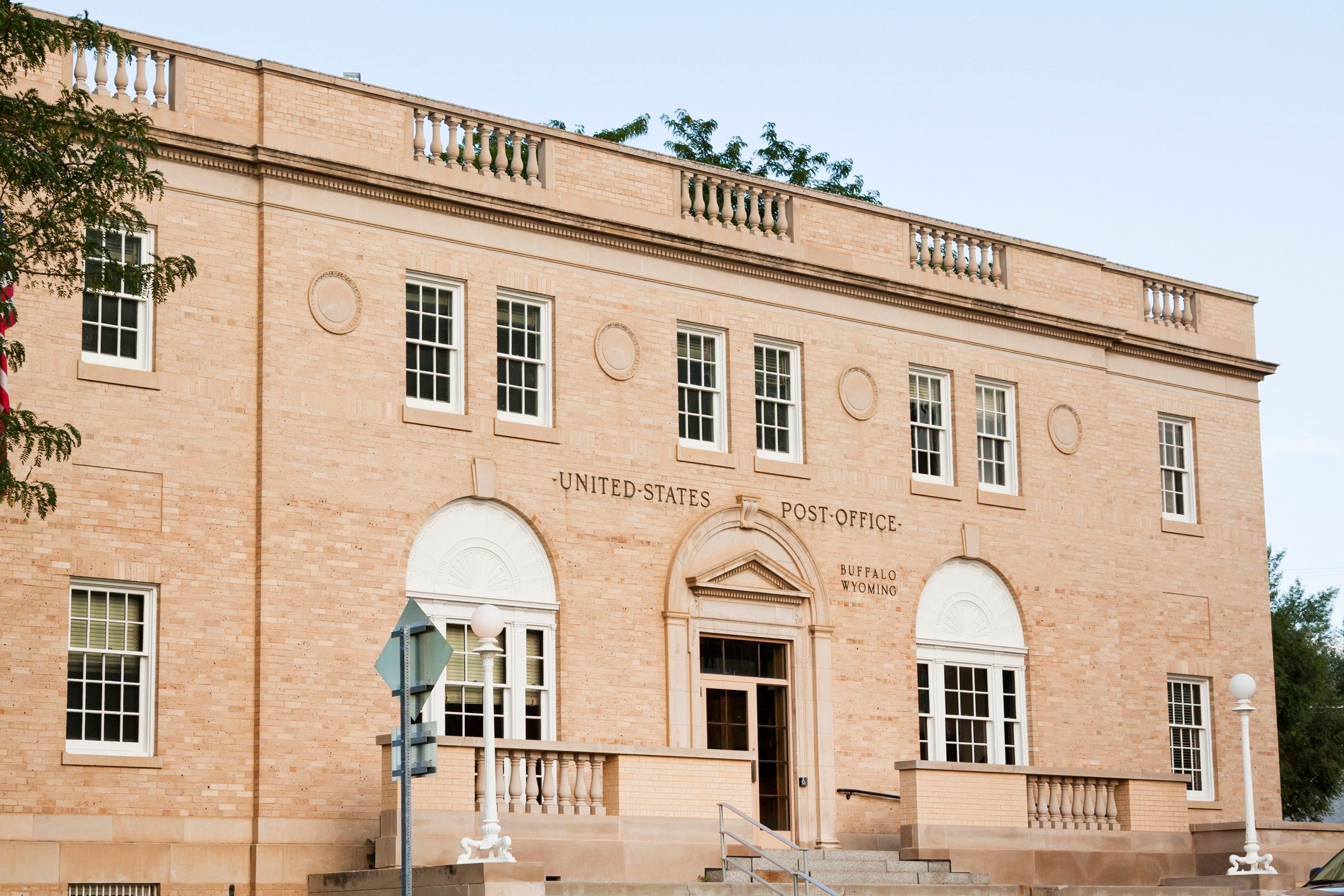 It took more than a decade of campaigning by local citizens and the Wyoming Congressional delegation to secure the funds and approval to create a federal post office in the city of Buffalo. Though the specific architect of the Buffalo Main Post Office is not known, James A. Wetmore, a supervising architect from the Treasury Department, oversaw the design. What makes this post office—which was completed in 1936—so unique is its representation of the transition between Beaux-Arts Classicism to “efficient” Modernist designs of the 1930s. This is best seen in the flat, limestone Modernist facade combined with the ornate detailing of the Beaux-Arts tradition. Next, take a tour of the 35 most beautiful man-made structures in the world.