13 of the Most Colorful Animals of the Ocean

Some creatures that live beneath the waves are bright, beautiful, and strange. 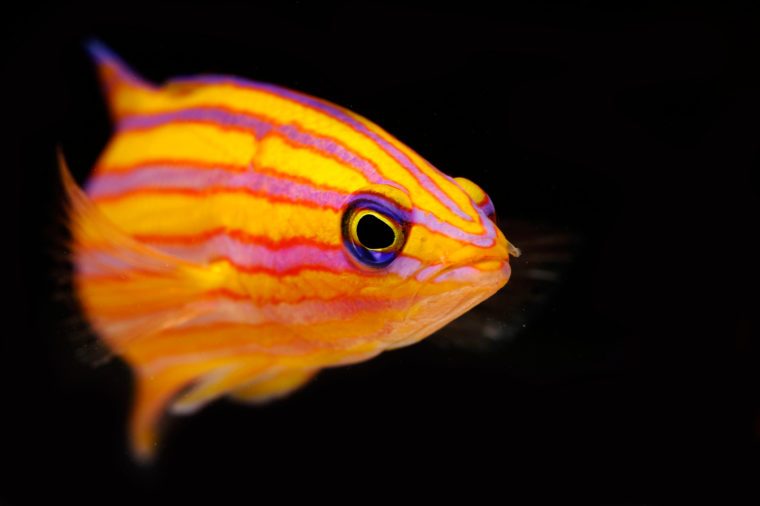 This secretive native of both side of the Caribbean—from Belize to the British Virgin Islands—hides out on ledges and in caves of reefs up to 140 feet below the surface of the sea. Although not being spotted is tricky when you are lavender and orange striped with bright blue tails! The basslet is not the only colorful fish on the reef, though. 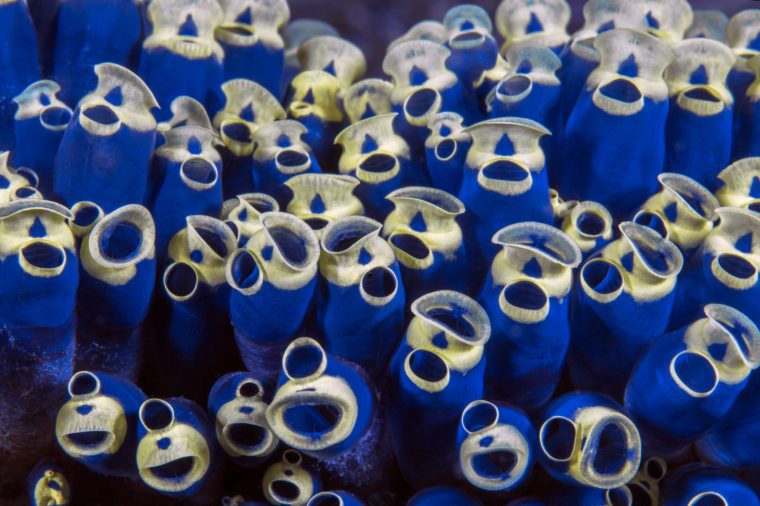 Also known as sea squirts, tunicates are barrel-shaped, often very-vividly-colored members of the subphylum Urochordata, which attach themselves to rocks, docks, and other stationery underwater objects. They feed by pulling sea water into their bodies, then siphoning out their all-time favorite meal: plankton. These mesmerizing photos of their neighbors, the jellyfish, will blow your mind. 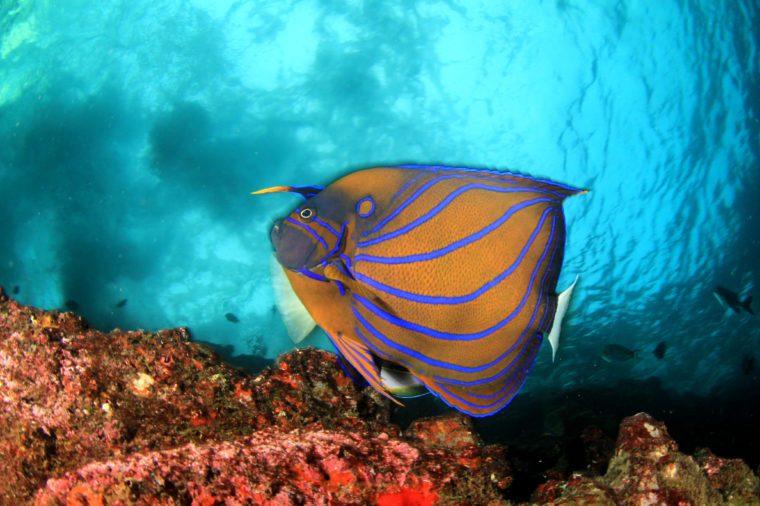 This almost neon-bright species native to the Indian Ocean and West Pacific loves to hang out in cloudy waters near piers and sunken ships. Growing to a foot-and-a-half in length, an angelfish likes to feast on tunicates, sponges, and zooplankton and often forms a bonded pair with a mate—which it greets after time spent apart with a little spinning dance. On land or in the sea, it’s just one of many of the world’s most colorful animals. 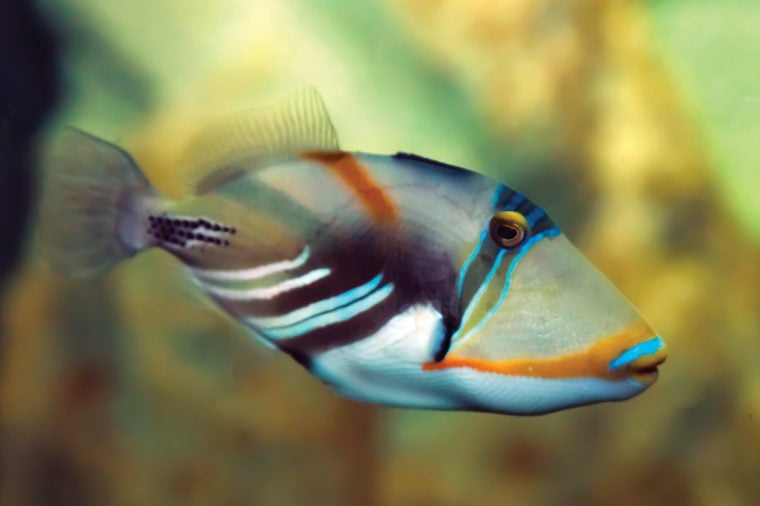 Looking like it originated in the mind of a cartoonist, this bad-tempered triggerfish hangs out, as do others of its ilk (there are 40 species worldwide) on the ocean floor, where it digs out prey, “such as crabs and worms by flapping away debris with [its] fins and sandblasting with water squirted from [its] mouth,” according to National Geographic. It can also “lock” itself into a crevice with its spines—an action unlocked by depressing another “trigger” spine. These photos of manatees will make you love the ocean even more. 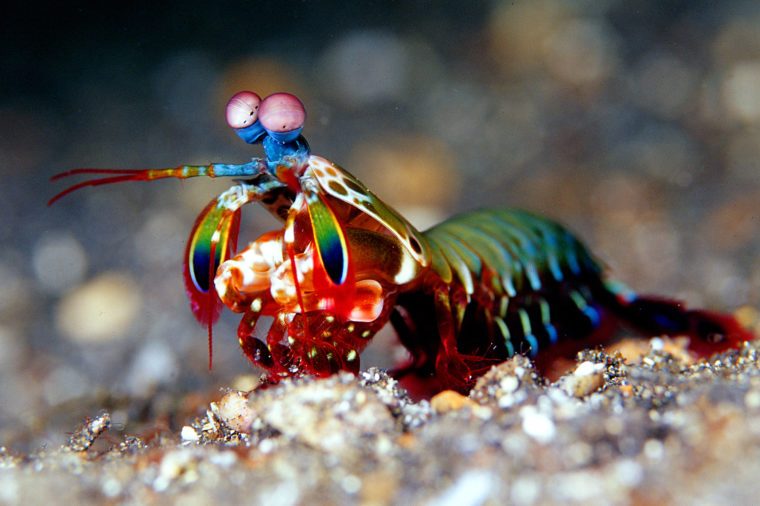 This shrimp species lives in the ocean flats of the Indo-Pacific, around coral reefs. (The males are multicolored; females are just as bright but usually monochromatic.) According to Oceana, it has got one of the fastest punches in the animal kingdom, which it uses to break open the shells of tasty snails, crabs, and shrimp. Its complex eyes allow it to see extra colors—a fitting ability for a creature adorned with its assortment of shades. 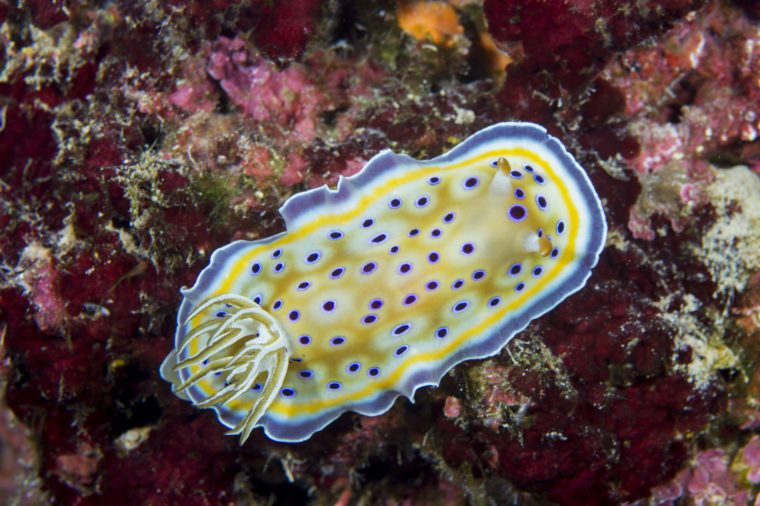 Aka sea slugs, nudibranchs are a group of vibrantly colored and patterned shell-less gastropods—2,000 species in all—that live on ocean bottoms in mainly tropical regions of the world. Weighing as much as 3.3 pounds (although many are much smaller), they use their antenna-like rhinophores to identify their prey (anemones, barnacles, and other nudibranchs); their color comes from the animals they eat and some of them even retain their prey’s poison, to use on would-be predators. 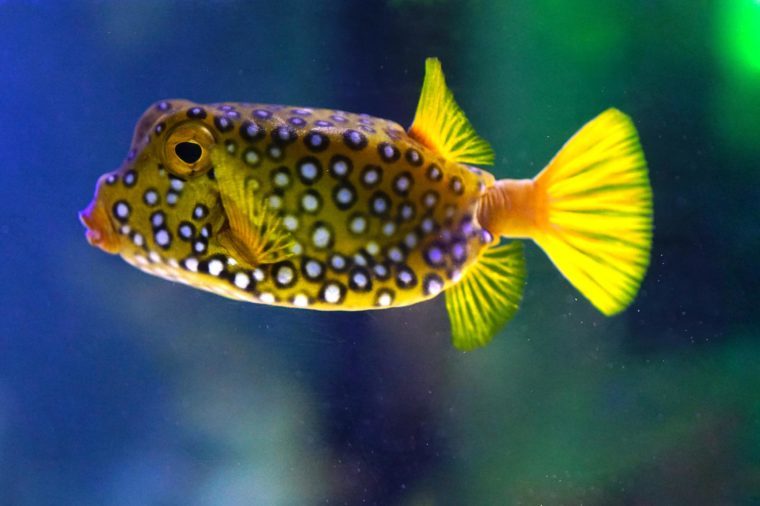 Yes, it is decidedly, impossibly yellow, and yes, it is shaped like a box! It’s also speckled all over with brownish/blackish spots, and plies the waters of the Indo-Pacific, near coral reefs, munching on mollusks, crustaceans, and worms. Its color isn’t just for beauty; its a warning to predators that its poisonous if eaten. 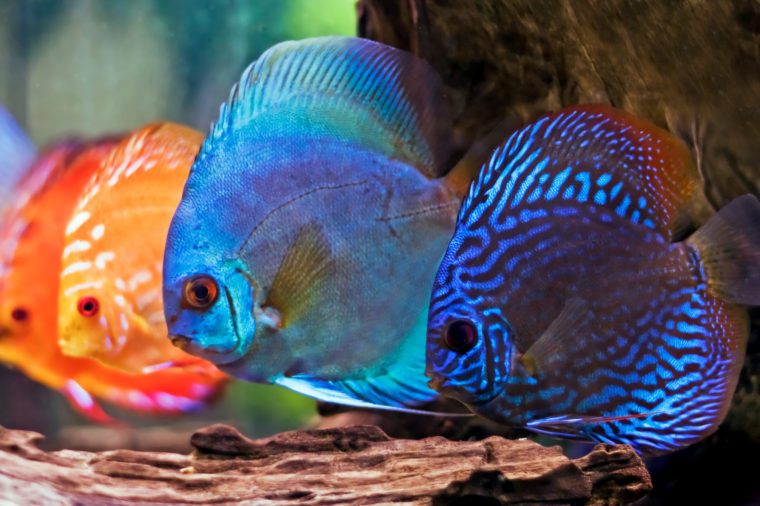 These fish—which come in green, blue, and reddish brown—are actually river rather than ocean fish, living throughout the range of the Amazon basin in its river systems. They take shelter among submerged tree roots and trunks, and they get extra camouflage from their nine vertical stripes. They’re social enough to form mating pairs—but known to be aggressive when threatened. 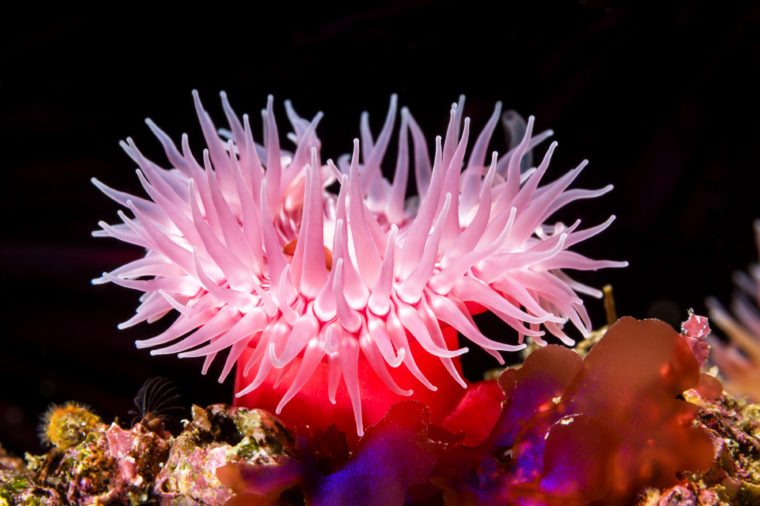 Sure they’re beautiful and so pleasingly colored. But this group of marine carnivores living near and on coral reefs spend their time waiting for prey to pass that they can tangle up in their poison-filled tentacles, according to National Geographic. Some of them, terrifyingly, can grow to six feet across. Many of them have symbiotic relationships with algae, protecting it in exchange for a snack of oxygen and sugar the algae makes via photosynthesis. 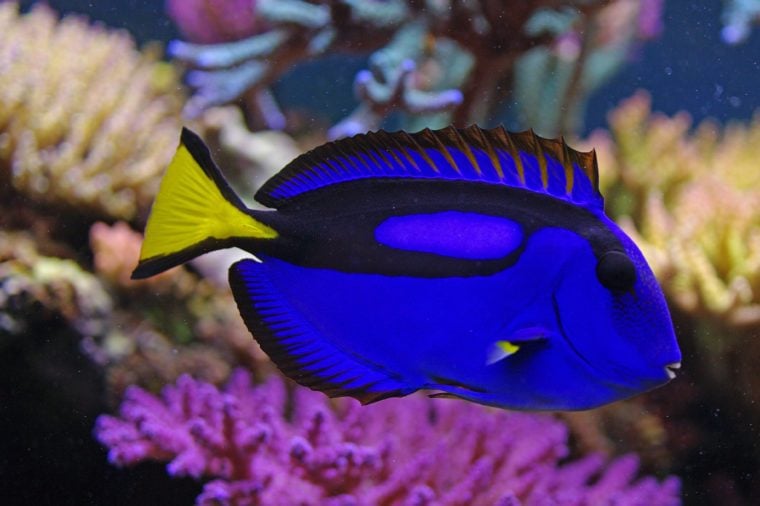 Blue tangs, made famous by Dory in the animated film Finding Nemo, are critical cleaners of tropical coral reefs, eating algae that might otherwise prove suffocating. This fish’s color changes at night—usually to a shade of white or lavender. And no matter how sweet Dory seems in the movies, in real life, blue tangs are poisonous to eat and sharp to the touch, thanks to their razor-sharp spines. 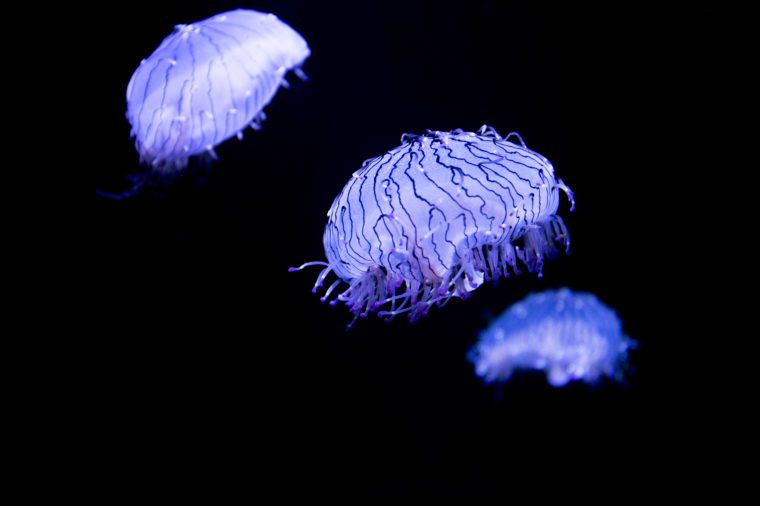 It’s as puffy and pretty as a pompom, but the flower hat jelly, a native of the northwest Pacific Ocean around Japan and South Korea, delivers a nasty sting with its numerous tentacles—powerful enough to fell its prey of fish and invertebrates. It’s got “no head, heart, brain, bones, cartilage, or real eyes, yet they’re among the major predators in the ocean,” according to the Monterey Bay Aquarium. 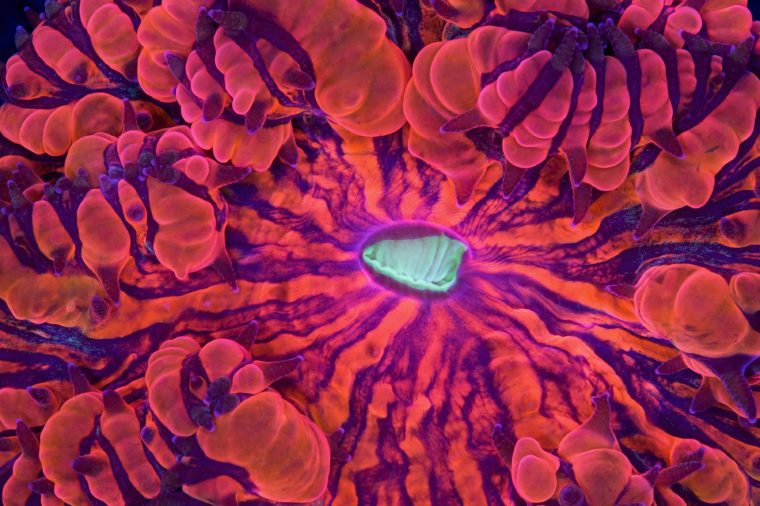 Seen here in a super-up-close macro photograph, this coral that’s native to Australia and nearby regions grows in bright, beautiful tubular clusters. It feeds at night, stretching its tentacles out from its hardened skeleton to catch any zooplankton that’s floating by. Although the world’s coral reefs are suffering the effects of climate change, they still provide critical habitat for many marine species. 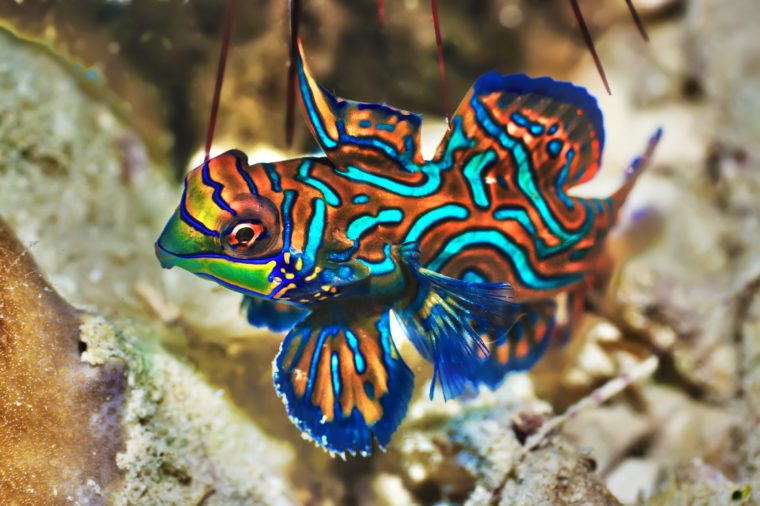 Intensely colored and patterned with an unusual assortment of wavy lines, these shy, small fish can live up to 15 years in the wild. They’re bottom-feeders, snacking on small crustaceans and worms that live with them in their native region of the Pacific, around the Philippines, Indonesia, and New Guinea. They have no scales, but lots of spines—12 in all—and can spawn weekly all year round. Next, read on for 15 of the most natural wonders on Earth.