The 15 Most Colorful Natural Wonders on Earth

Look up at the sky, down at the ground, or out into the landscape, and you'll see that our planet is a fascinating prism of hues, from multicolored mountains and deserts to astronomical curiosities and kaleidoscopic rivers. 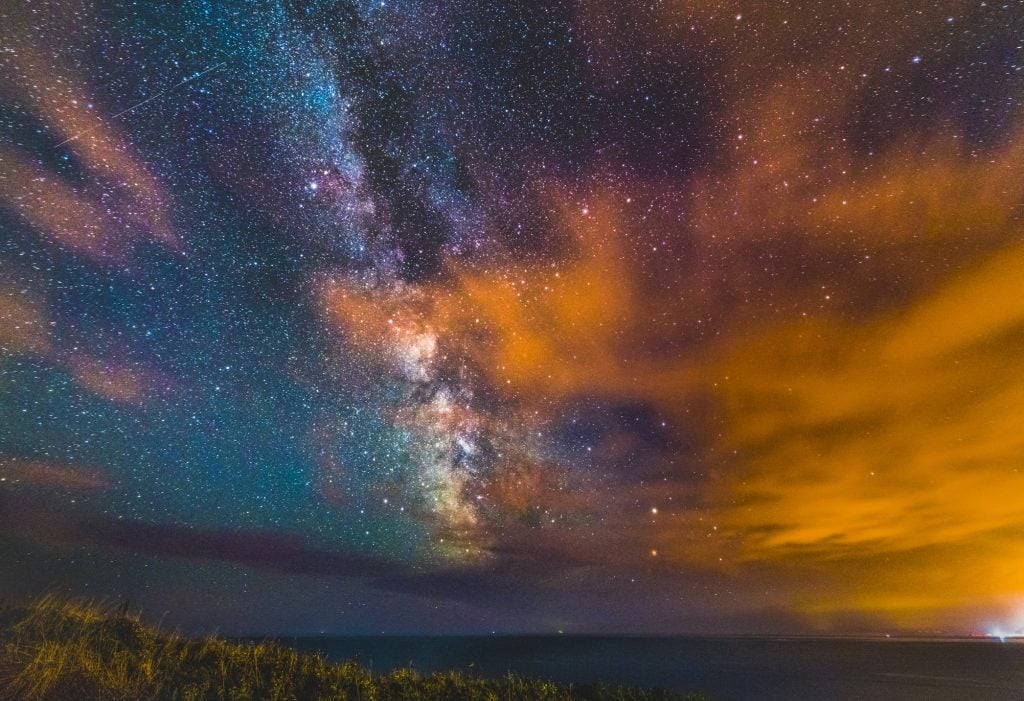 The most colorful scenes in nature

While we’d all love to dream about visiting these incredible sights right now, the current world state is keeping us from doing anything beyond dreaming…except looking at these beautiful photos, of course! Just like these photos of the world’s most beautiful countries, we hope these gorgeous pictures remind you that while we may be trapped inside right now, around us the world is lighting up in the most fantastic ways, and that they give you a little something to smile about. 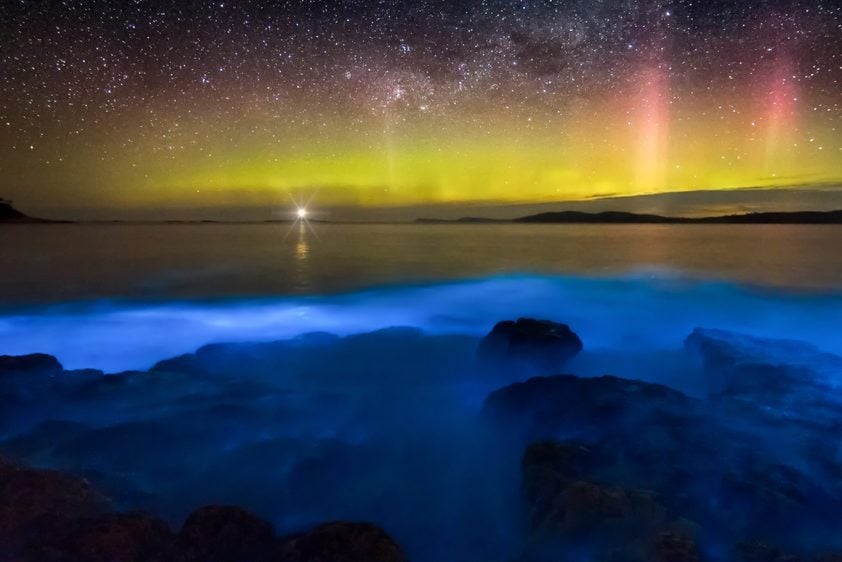 If you’ve ever seen a firefly, then you’ve witnessed bioluminescence—a pulsating glow emitted by living organisms. Most bioluminescent creatures are marine life, though, and when they light up underwater, the whole sea seems to magically sparkle. There are plenty of these kinds of waters throughout the world, but the River Derwent in Tasmania offers a double whammy in the spring: bioluminescent waves, right beneath the Aurora Australis, a natural electric phenomenon that creates a technicolor sky. 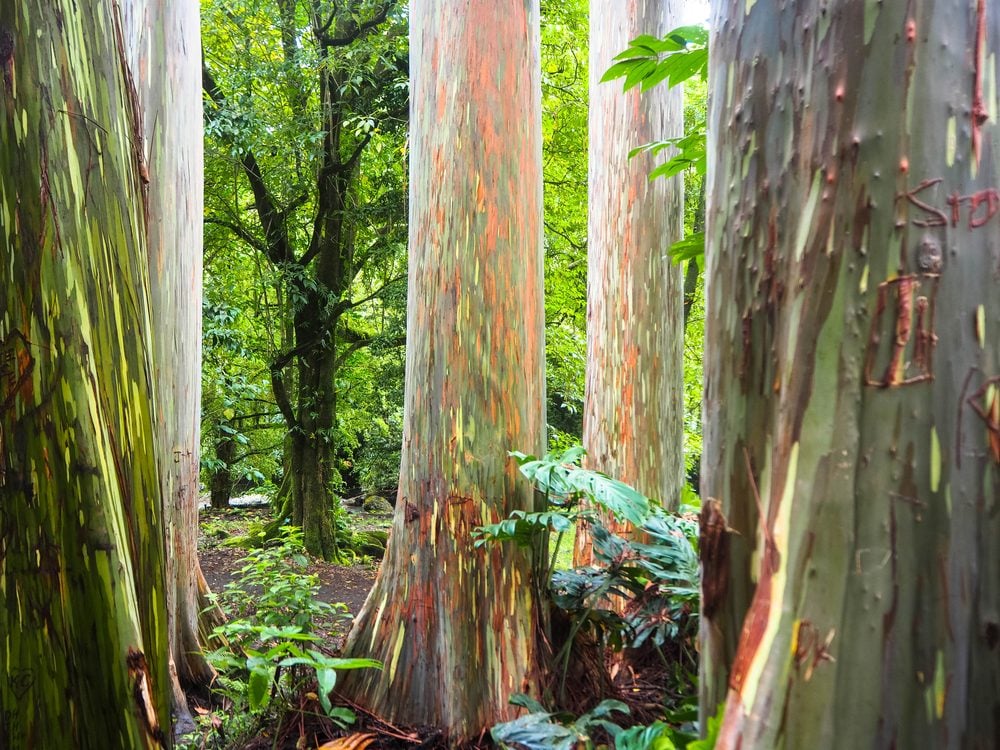 The iconic Painted Forest on the road to Hana, Maui is saturated with eucalyptus trees boasting multicolored trunks straight out of a fantasy film. The colors are actually the result of the bark peeling off the trees to reveal the new bark beneath, which transforms from green into blue, purple, orange, yellow, and maroon. Rainbow eucalyptus trees can be found along hikes in Kauai, too—just one of Hawaii’s many magical draws. Hawaii is filled with all sorts of unique colors. Find out the gross reason the sand on Hawaii’s beaches is white. 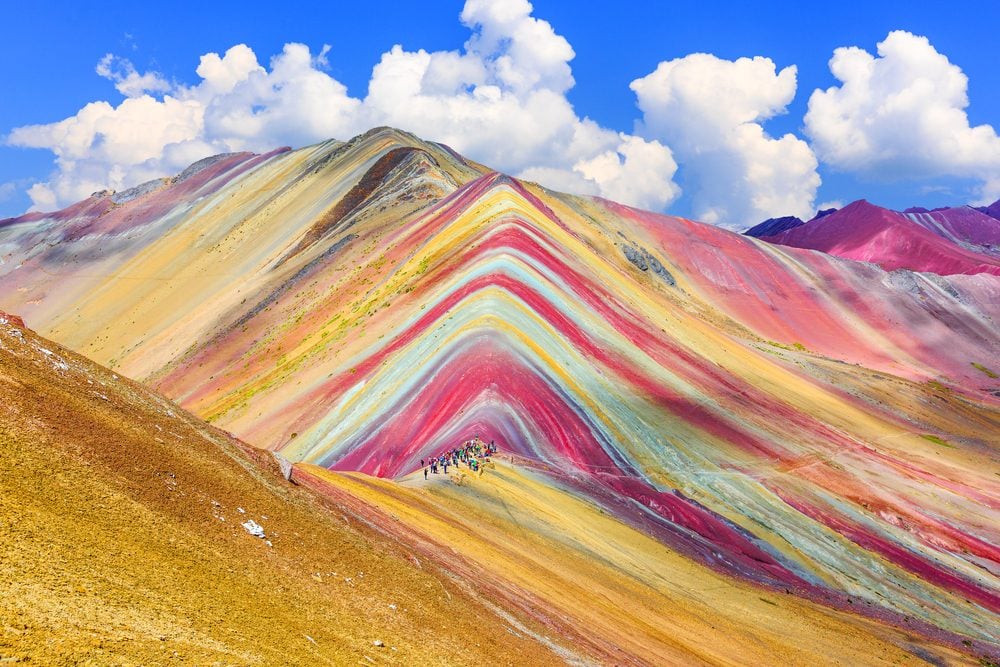 Rainbow Mountain in the Peruvian Andes

The Vinicunca mountain, aka Montaña de Siete Colores (Mountain of Seven Colors), sits pretty way up in the Peruvian Andes, where it was discovered about five years ago and is now a popular destination for tourists—though the trek to reach it is notoriously daunting. If you do survive the arduous hike and uncomfortably high altitude, you’ll discover a breathtaking natural wonder: thick rainbow stripes seemingly painted into the mountainside, thanks to artfully placed mineral deposits over millions of years. For more picture-perfect destinations, check out these breathtaking photos of the most beautiful country on Earth. 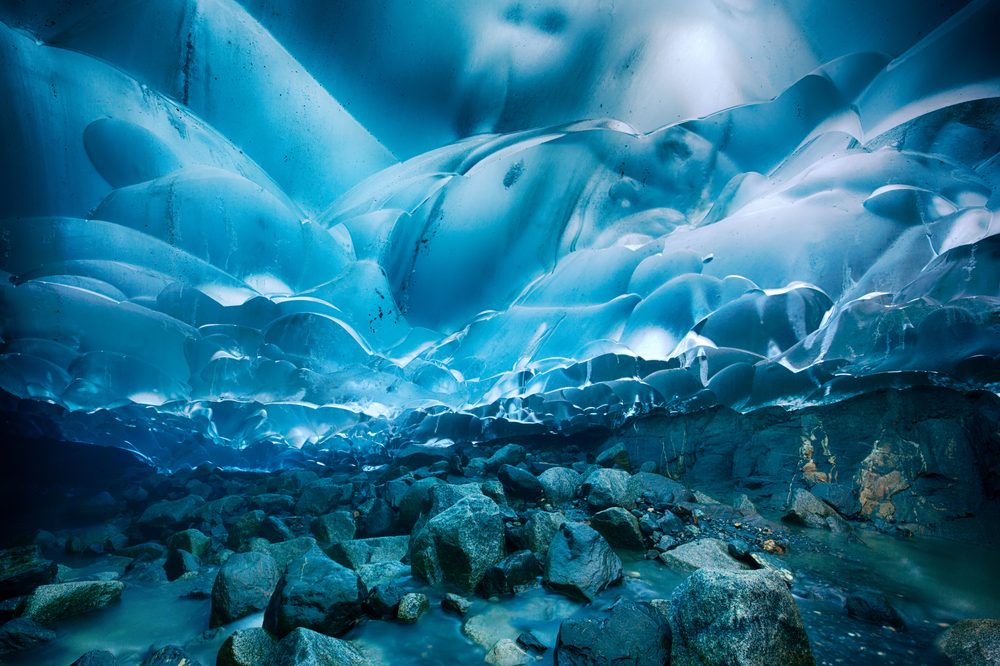 Inside Alaska’s breathtaking Mendenhall Glacier are its utterly surreal Ice Caves. The journey into this dreamlike underworld is not for the faint of heart: explorers have to brave a kayak and then climb slippery terrains. The struggle is worth the reward, though, especially because these incredible sights might be fleeting. The glacier is reportedly succumbing to the effects of global warming. Find out more breathtaking places we should appreciate—before they disappear. 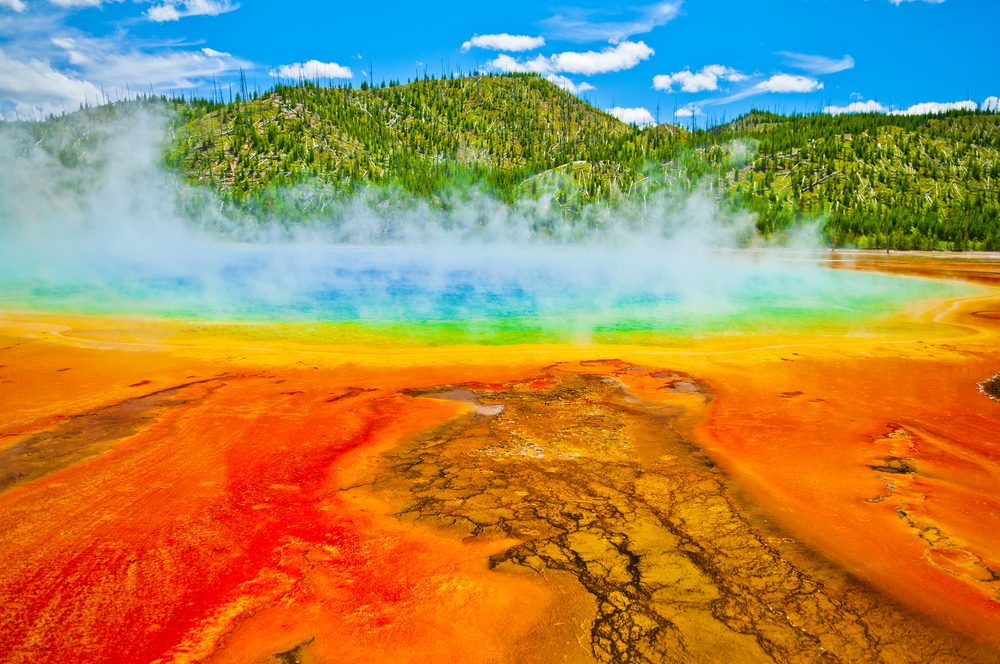 Yellowstone hosts its share of natural wonders, but perhaps the most vibrant and photogenic is its most famous thermal pool, the Grand Prismatic Spring. True to its name, this football field-sized hot spring—the largest in the United States—is lined with yellow, green, and orange rings secreted by heat-loving bacteria. In the center is a swath of vibrant blue water, which shoots up through a crack in the Earth at a searing 170 degrees Fahrenheit. Here’s another wonder of the world: the sight of the moon during the day. 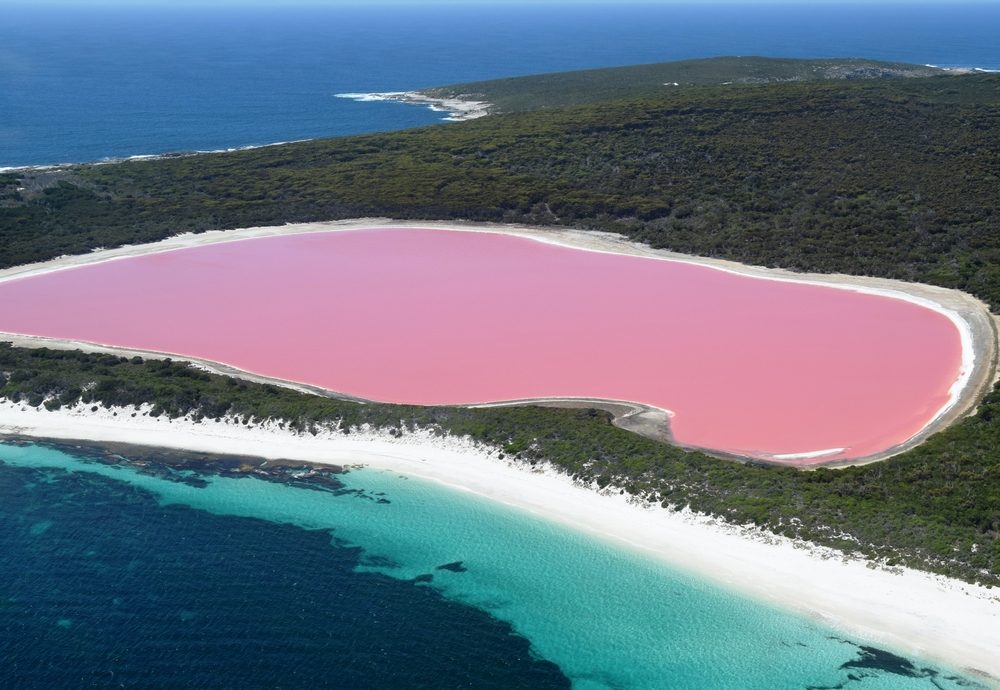 On Middle Island off the coast of Central Australia, right next to the Pacific Ocean, you’ll find a small lake that resembles a giant reservoir of rosé wine. There are several theories as to what gives this body of water its curiously pink hue. One is its high concentration of salt, which attracts certain types of algae that secrete pink pigments. A reaction between salt and sodium bicarbonate is another. Don’t miss these other naturally beautiful pink lakes from around the world. 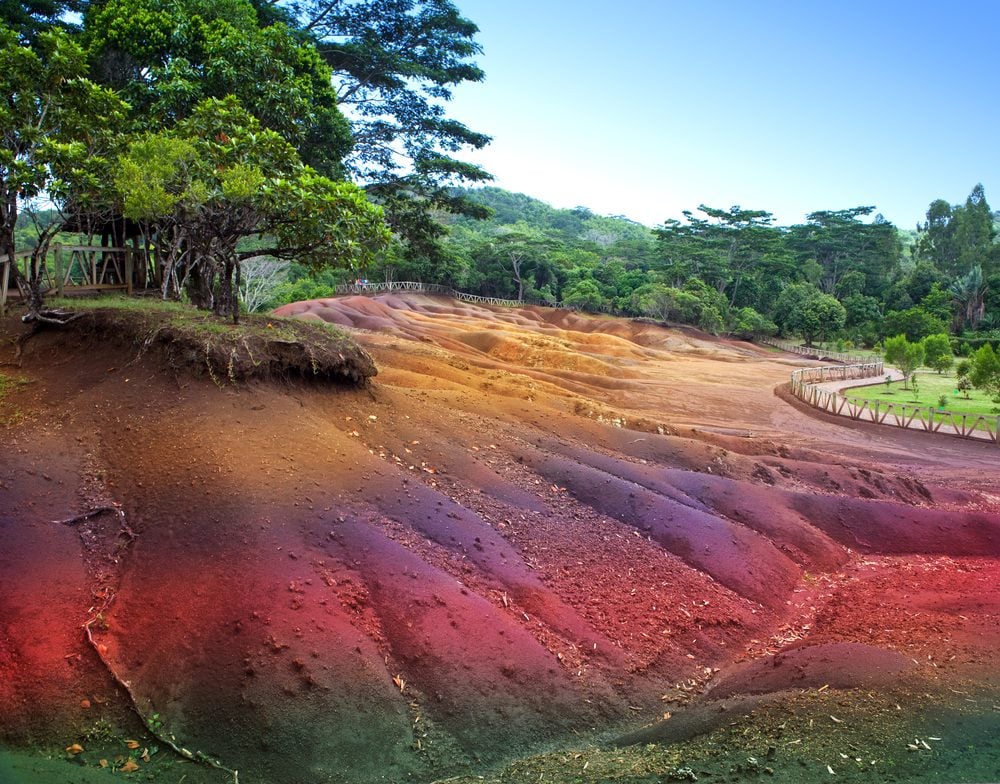 Volcanic activity on the island of Mauritius, off the African coast, has resulted in some unusually vivid sand dunes. The prismatic colors of this geological curiosity inspired the moniker Terres de Sept Couleurs, or Seven Colored Earths, in this former French colony. It’s become a popular destination for visitors not just for its aesthetic allure, but also because of its mystical resilience: the dunes appear immune to erosion. 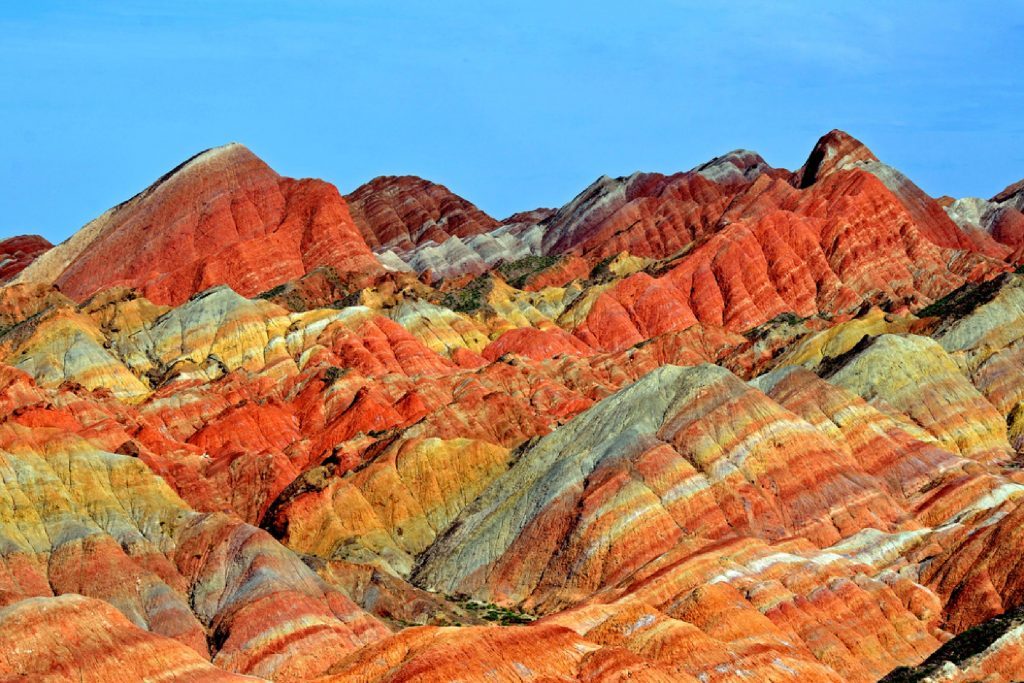 Before the Rainbow Mountain of Peru was discovered, the Zhangye Danxia Landform in China was the world’s most famous multicolored mountain range. Located in a geological park of the same name, in the province of Gansu, the Zhangye Danxia Landform—made of cretaceous sandstones and siltstones colored with mineral deposits—has been designated a UNESCO World Heritage Site. Here are some more UNESCO World Heritage Sites everyone should see once in their life. 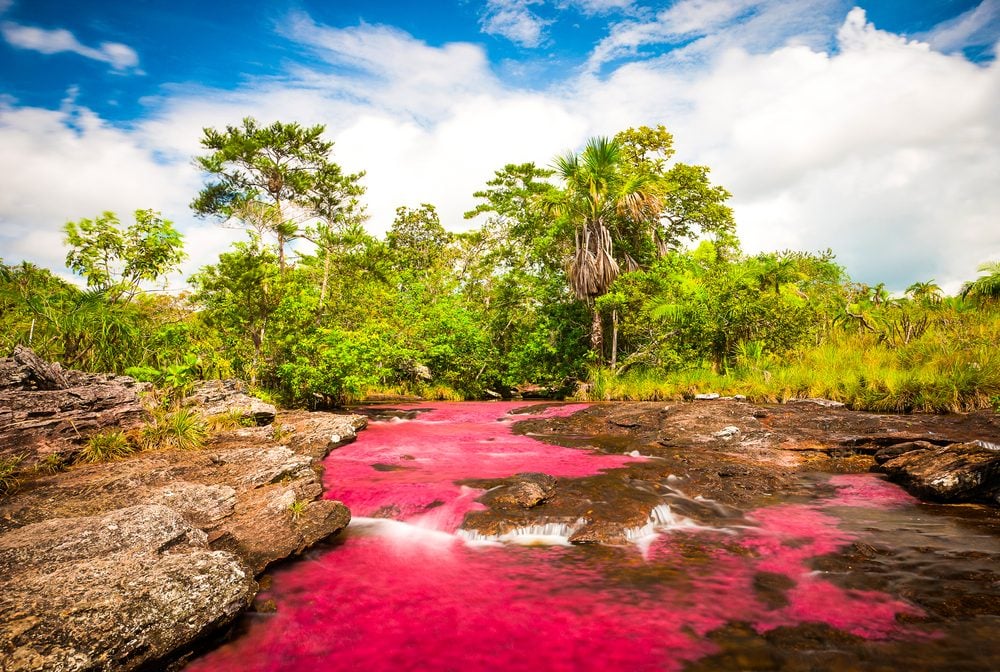 Dubbed “the most beautiful river in the world,” Caño Cristales boasts psychedelic waters that run in five colors—but only for part of the year. During the country’s wet and dry seasons, a confluence of natural occurrences causes the waters to run chromatic. A plant species on the floor of the river is responsible for a bright red hue—most visible during this time of year, when the water is most shallow—but sand and rock formations make up the yellow, green, and black that mingle with the river’s year-round blue. 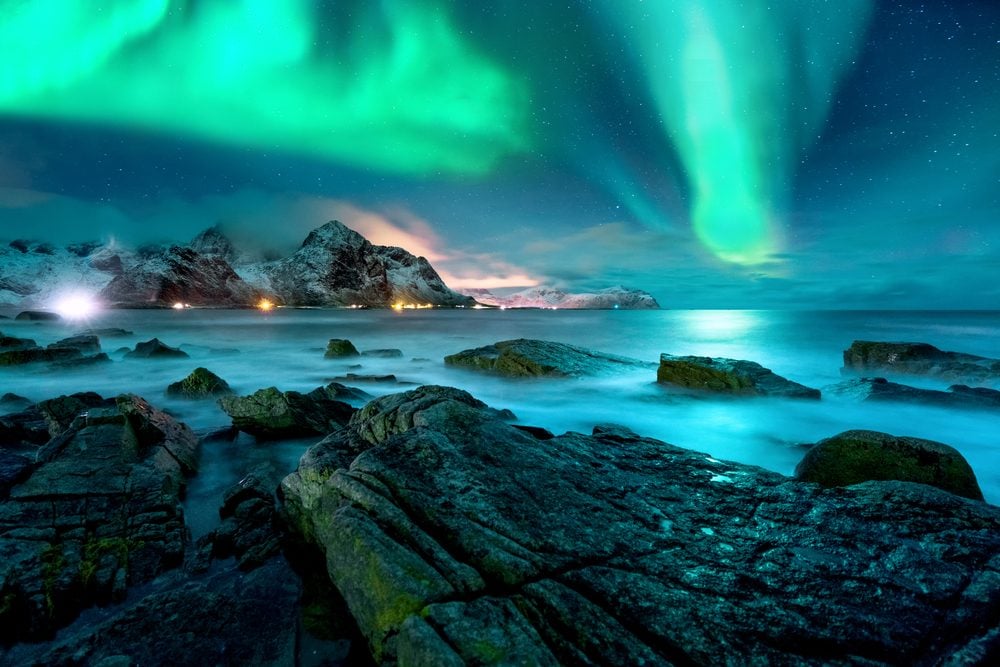 The mythical light show known as the Northern Lights, or the Aurora Borealis, is visible in many places, including Alaska, Iceland, Canada, and Greenland. But arguably the best place to see this natural phenomenon is northern Norway, especially near the town of Tromsø. Between September and March, when it’s dark, peep up at the sky to catch swirls of glowing green, pink, and purple, a reaction prompted by the electrical charges of gaseous particles in the Earth’s atmosphere. 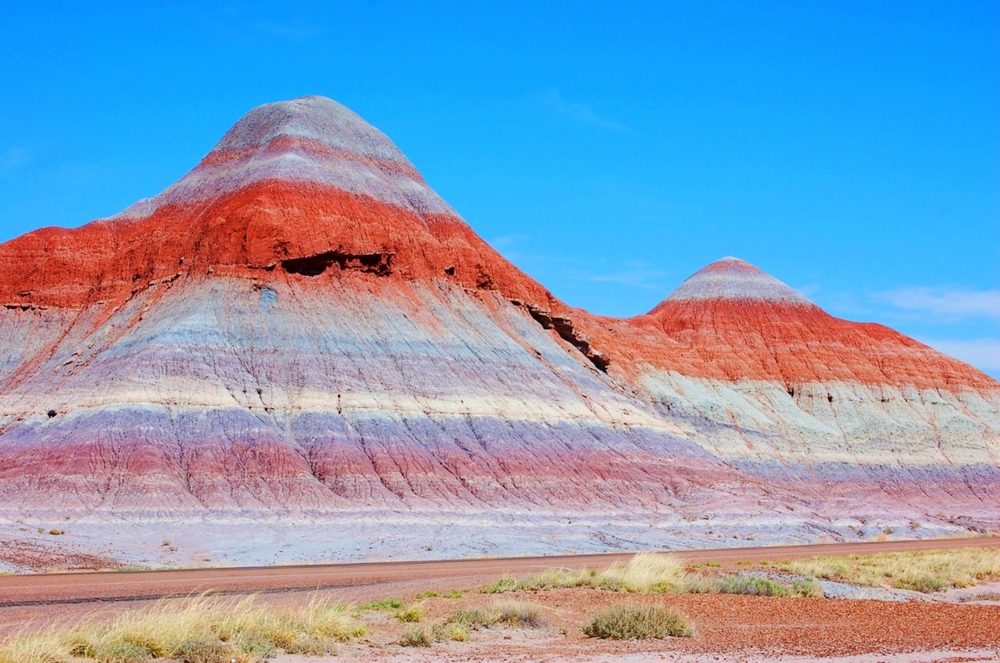 One of the legendary kicks you’ll get on a road trip through Route 66 is a tour of the technicolor Painted Desert in Arizona’s Petrified Forest near the southeastern rim of the Grand Canyon. The desert got its name from its unique terrain, a combination of sediments from sandstone, clay, volcanic ash, and other geological materials that project a kaleidoscope of colors including lavender, red, orange, and pink. Get a look at some more of the world’s most incredible rock formations. 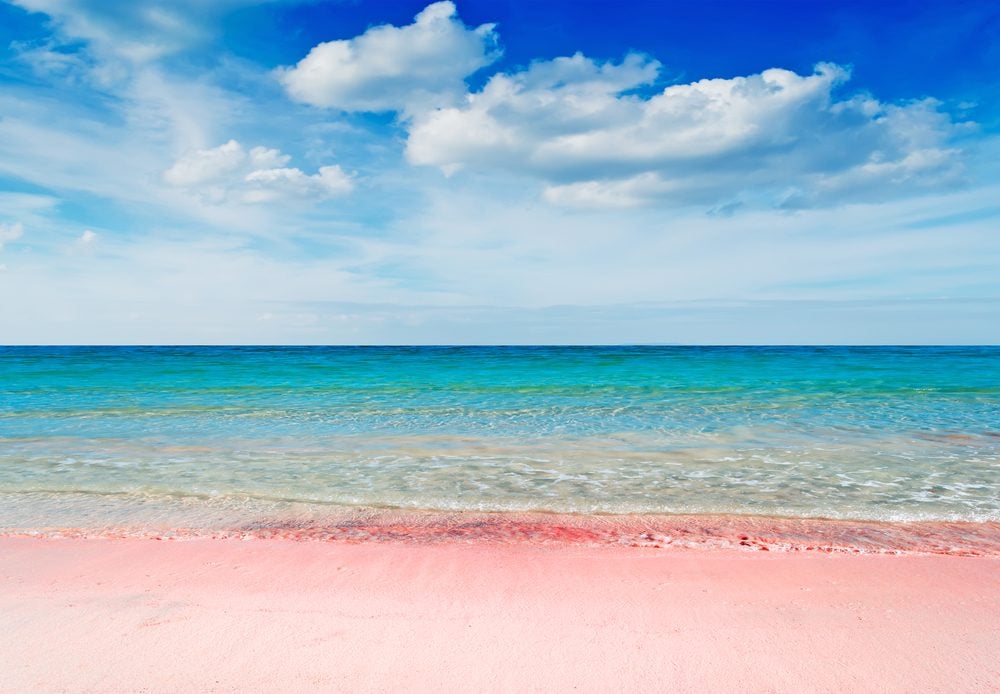 The coast of Italy’s picturesque island of Budelli is covered in pink sand, thanks to crushed fossils, crystals, and coral from the Mediterranean. Hence the name Spiaggia Rosa, or Pink Beach. Pink sand is very rare and coveted, and much of it was stolen from the beach over the years, causing the Italian government to ban visitors. The good news is you can still stand near the beach and get a glimpse of its rosy tones. Check out some more of the world’s most gorgeous pink sand beaches. 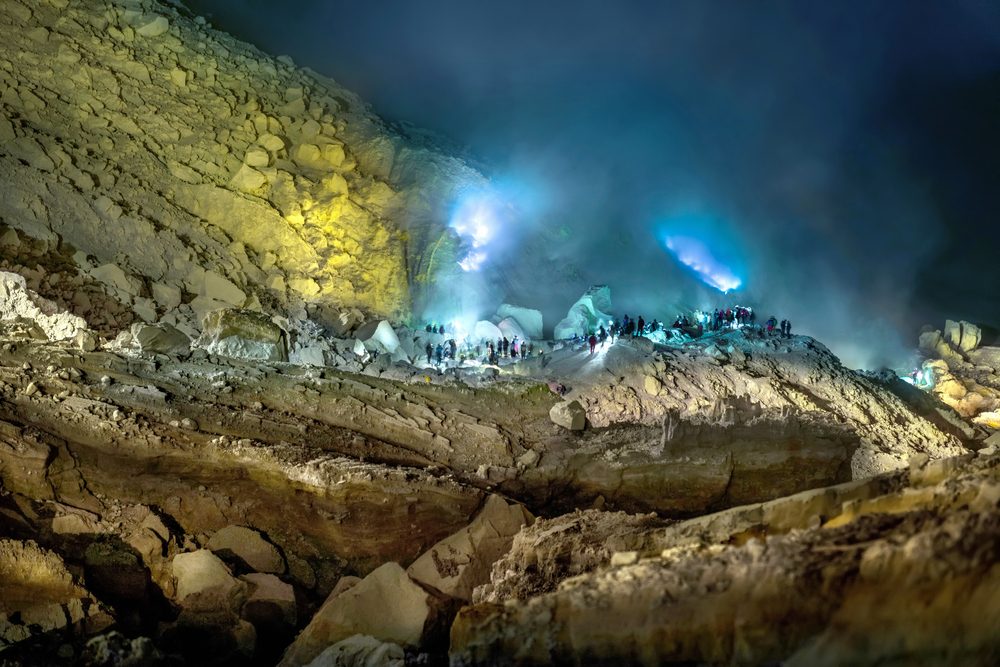 This active volcano is a sight to behold, as it doesn’t just spew typical red lava. Rather, its lava is a striking blue, thanks to the presence of sulfur. At night, visitors can marvel at the extraordinary electric blue flames. As if that weren’t cool enough, the volcano happens to sit right beside one of the world’s most acidic lakes, known as the Blue Acid Lake. Speaking of beautiful bodies of water, don’t miss these photos of gorgeous beaches with the clearest water in the world. 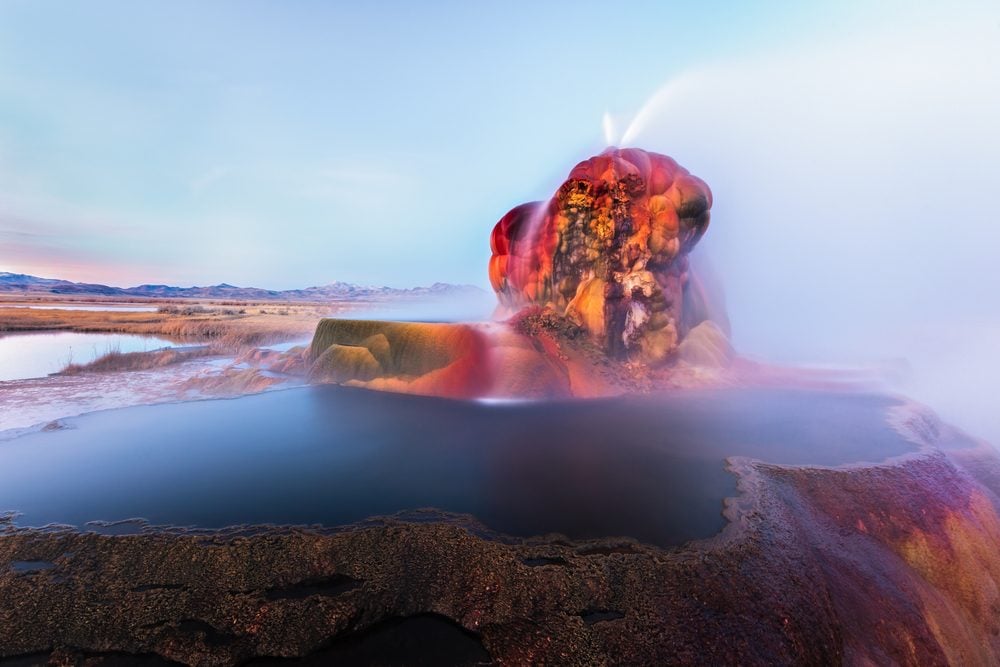 Multicolored algae are responsible for the psychedelic colors of this geothermal geyser, a storybook-like natural structure that erupts water five feet into the air and can be visited during a guided nature walk. Residing in Nevada’s Fly Ranch, the geyser was recently acquired by the Burning Man Project, most famous for its yearly festival in the nearby Black Rock Desert. 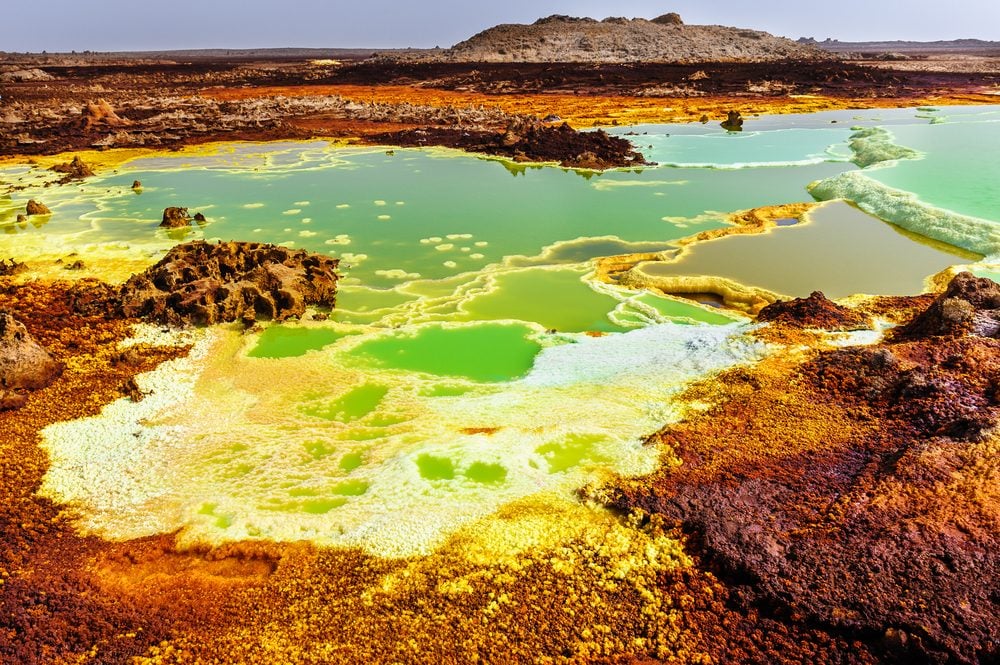 You might be hesitant to want to actually visit this natural wonder, as it’s officially the hottest place on planet Earth. Part of the Great Rift Valley, it’s brimming with burning salt, volcanic rock, and sulfuric acid, and its average annual temperature is about 94 degrees Fahrenheit, though it can go up to 116. Salt deposits, volcanic debris, hot springs, mineral deposits, and more are responsible for an otherworldly landscape of neon yellow and green. For more colorful destinations, look no further than these photos of the world’s most colorful towns.