Breathtaking Photos of Cities Perched on the Edge of Cliffs

Don't let a fear of heights prevent you from admiring these amazing cliffside cities. 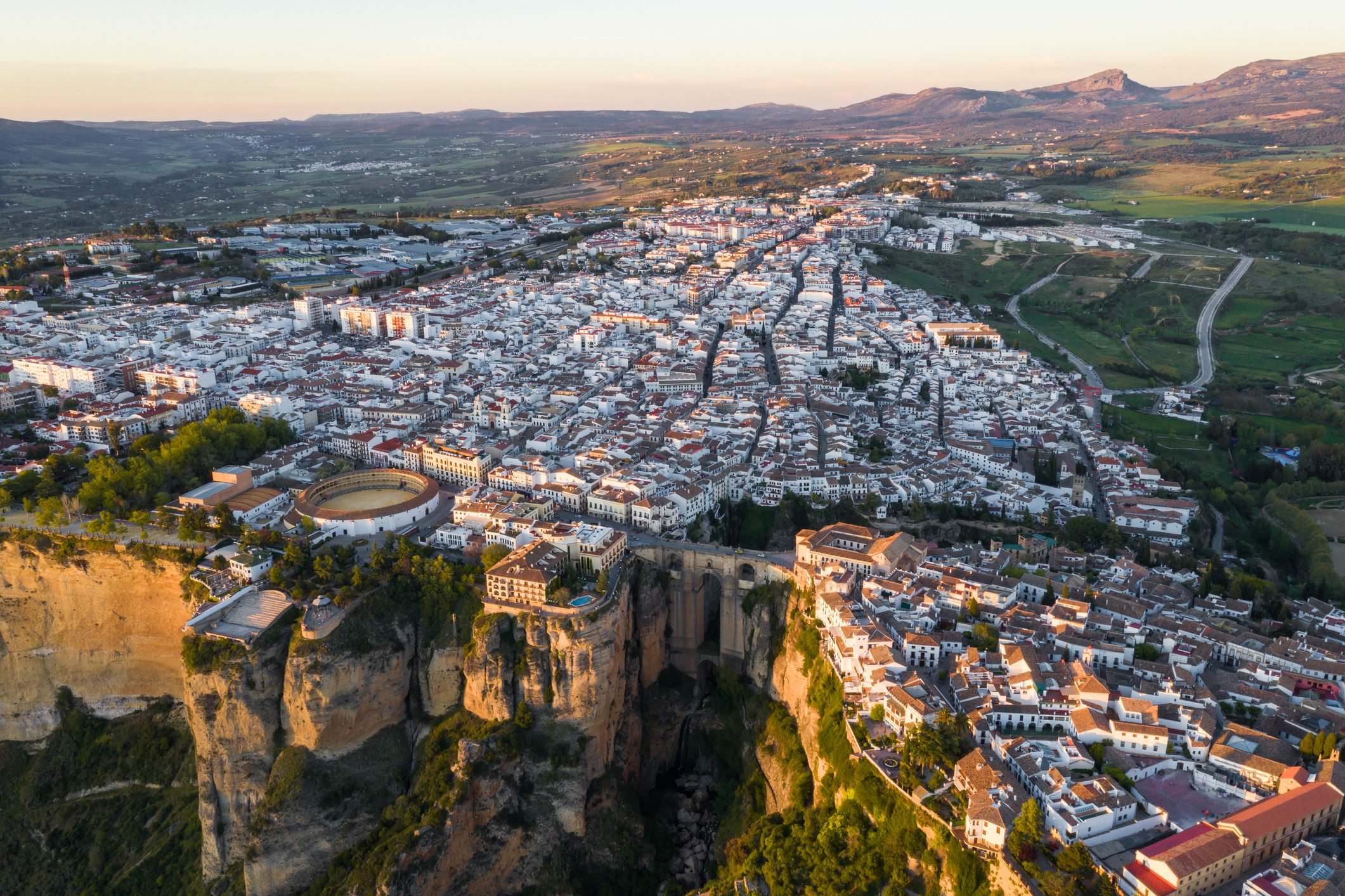 High in the sky

Whether you’re armchair traveling or planning for a post-pandemic trip, these 13 cliffside cities and towns will spark your imagination. It’s hard to imagine the difficulty of building cities in such precarious positions today, let alone when they were first created. At the time, though, defending these towns and villages was most important. The residents wanted to be able to see who was coming from afar and wanted it to be difficult to enter their cities, making the cliffside locations ideal. In modern times, these towns are more concerned with defending themselves from the onslaught of tourists who want to admire their spectacular views. For now, it’s best to enjoy these cities—along with this selection of tours of attractions that were on your bucket list—virtually. 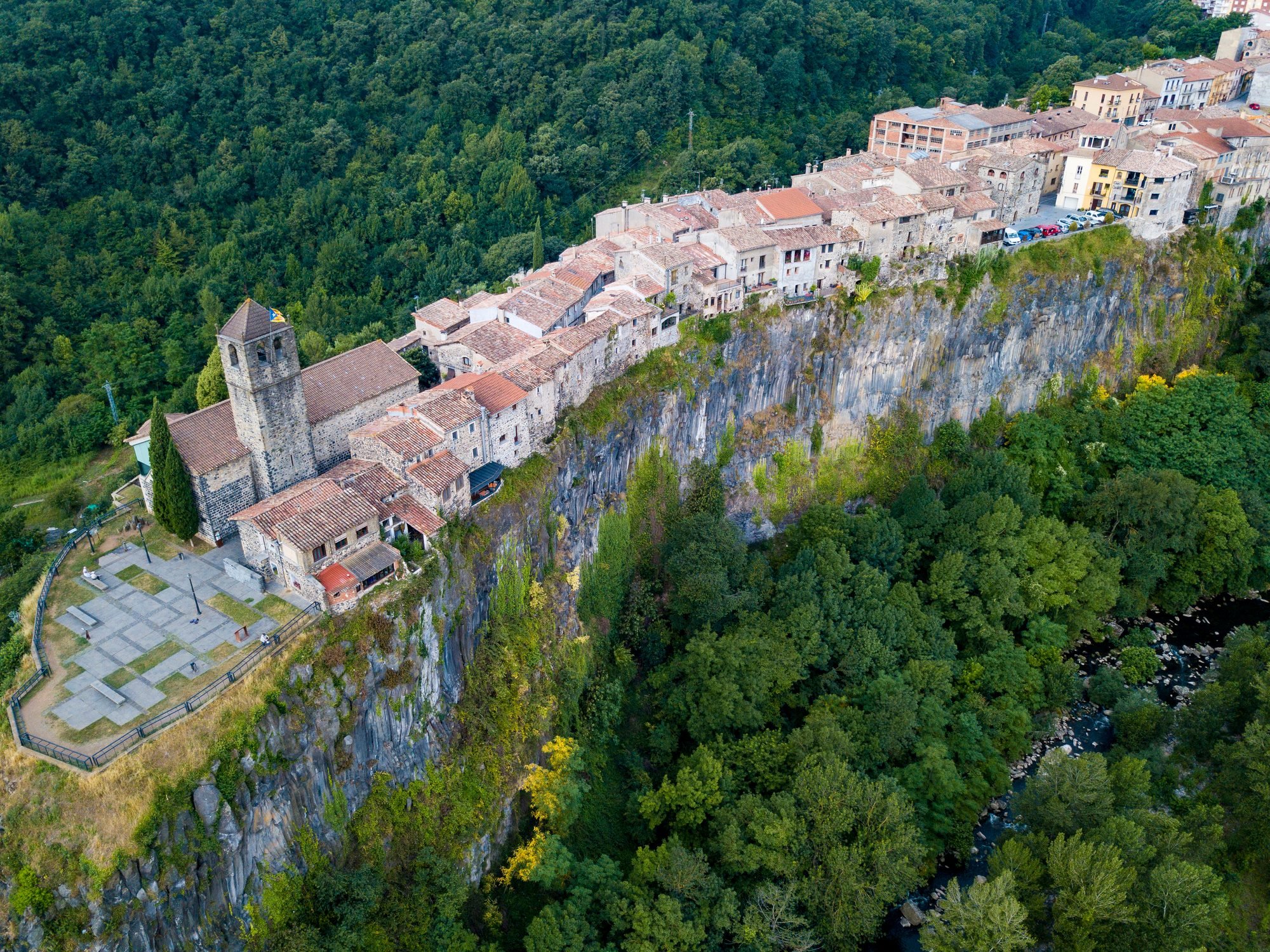 This Spanish town of about 1,000 people is in the Garrotxa region of Catalonia. Castellfollit De La Roca is built on the cliffs above where the Toronell and Fluvià rivers meet. The old town dates back to the Middle Ages and, when you visit, you can wander through its streets and see the restored 11th-century Sant Salvador church. The best views of the town are likely from a hot air balloon where you can admire the whole Garrotxa region’s unique volcanic landscape. These 80 gorgeous travel photos from around the world might inspire even more of your travel dreaming. 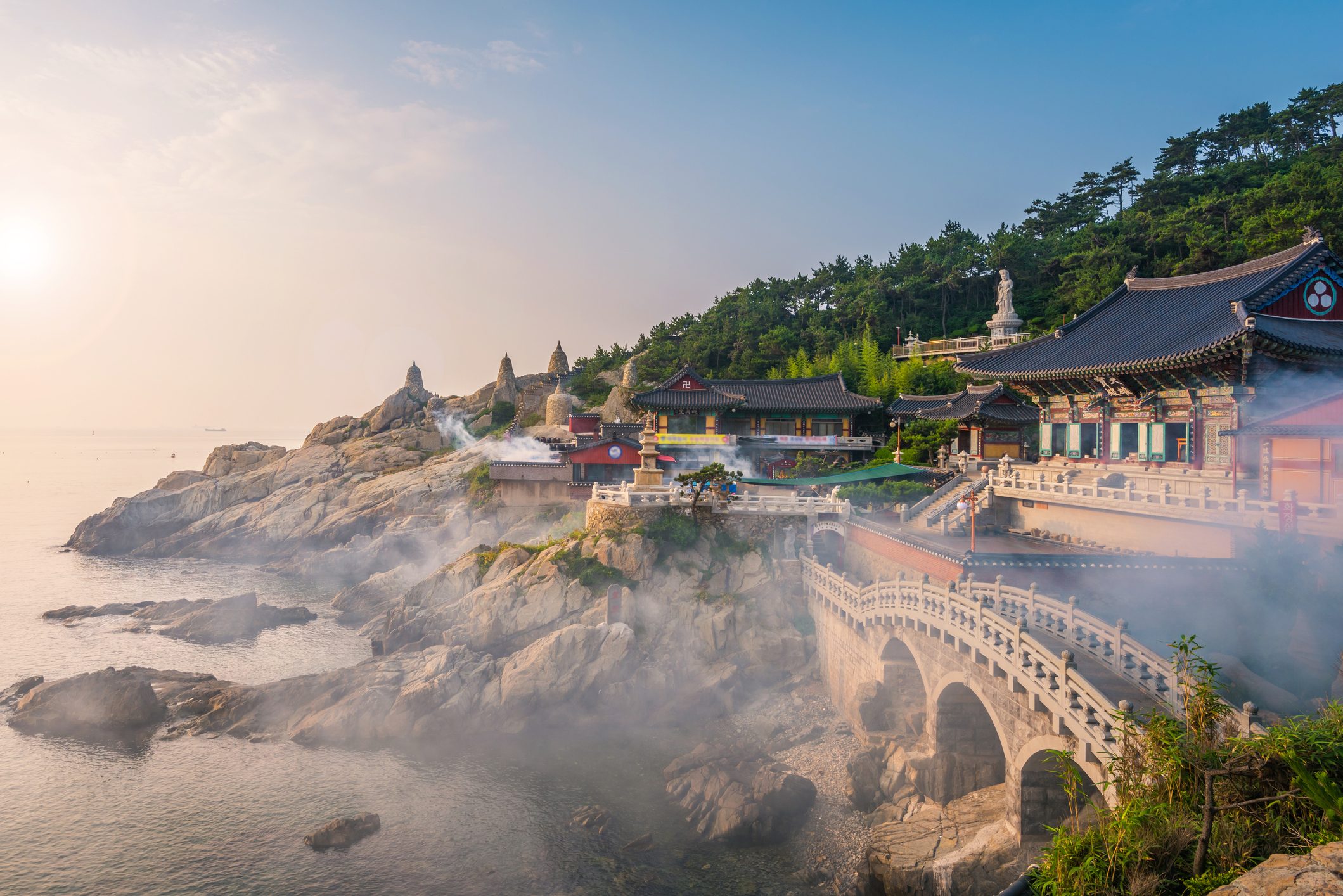 Busan is the second-largest city in South Korea, and it’s built right out to its beaches and seaside cliffs. This photo depicts the dramatically-situated Haedong Yonggungsa Temple in Busan’s northeast. The temple was founded by Naong Hyegeunin in 1376. Naong dreamed of a sea god who told him that building the temple would bring an end to famine, the return of rain for crops, and happiness to the people who prayed there. The temple remains a popular spot for tourists today. Churches and temples like this one are often a city’s most beautiful buildings, sometimes even more so when they’re old, like these 12 abandoned churches that are eerily gorgeous. 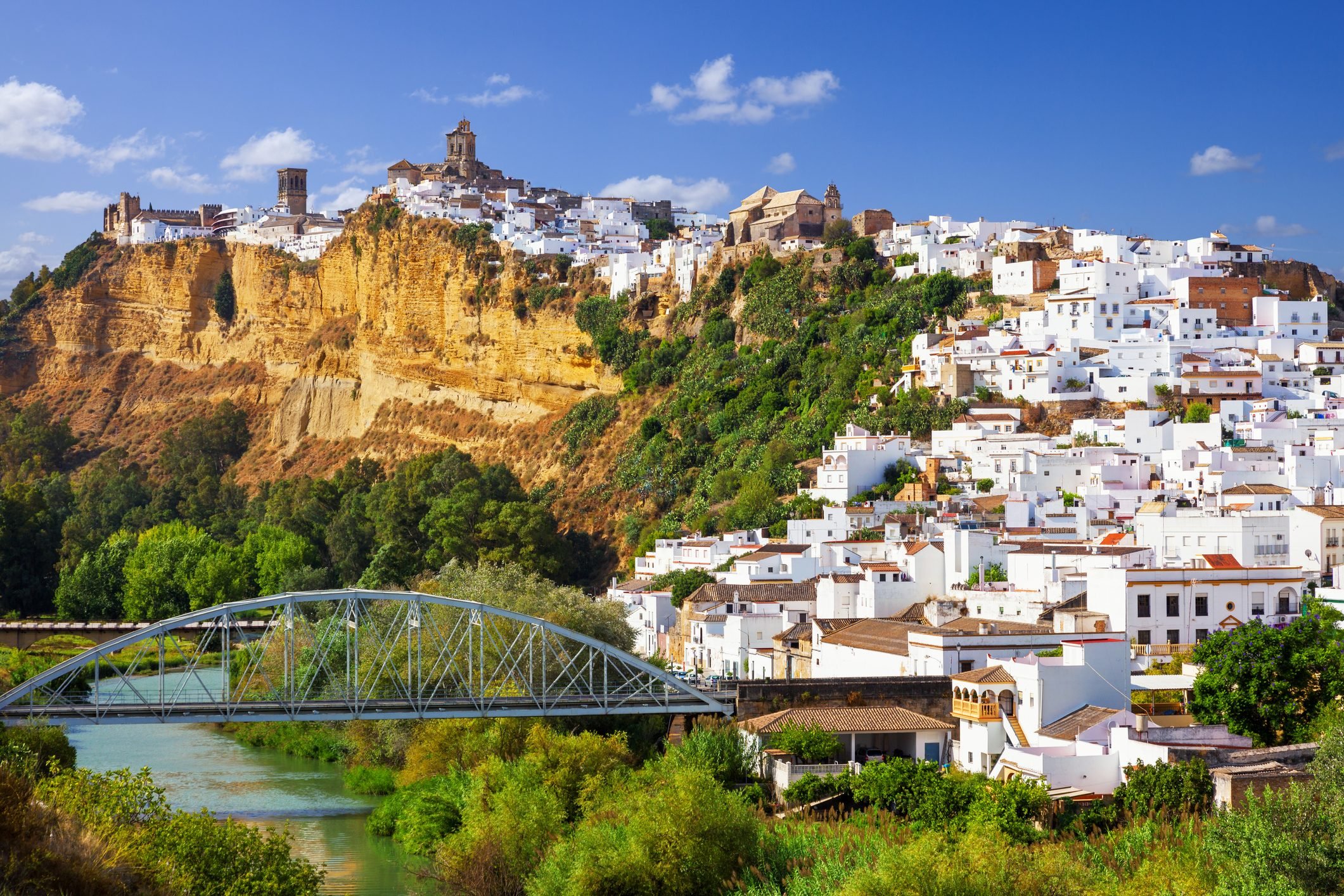 The cliffside village of Arcos De La Frontera is in the Spanish province of Cadiz. It’s one of Andalucia’s pueblos blancos, or white villages, known for its many whitewashed buildings. The village sits on a limestone cliff above the Guadalete River. With a source of fresh water and the hilltop location allowing defensive views of anyone approaching, it was an ideal spot for a settlement. It’s been occupied for a very long time—artifacts and ruins have been found there that date to the Neolithic and Bronze Age, as well as from the Phoenician, Roman, and Moorish periods. Looking for more armchair travel destinations? Here are 50 jaw-dropping photos of the world’s most beautiful countries. 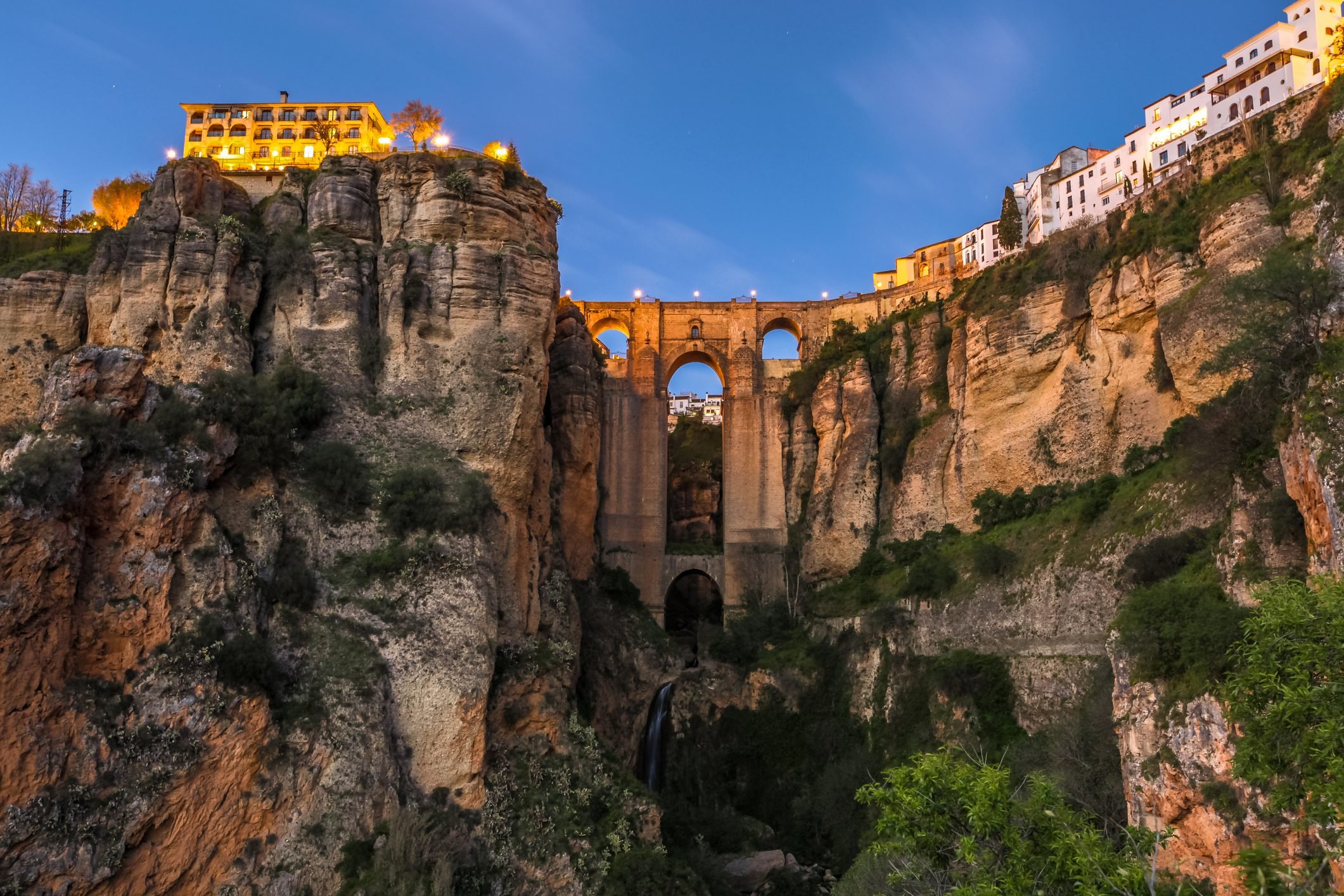 Another picturesque cliffside village in Spain is Ronda. Ronda is another of Andalucia’s popular pueblos blancos. The town sits above the 360-foot deep El Tajo gorge. The gorge separates the old Moorish town, La Ciudad, and the new town, El Mercadillo, which dates to 1485. The bridge that connects them, Puente Nuevo, was built in 1793.

Ronda’s strategic location made it popular with the region’s legendary bandits in the 1700s to early 1900s. Ernest Hemingway also spent time in Ronda. He supposedly was a fan of watching the bullfighting in the Plaza de Toros. It’s one of Spain’s oldest bullrings, dating to 1785. That may seem old, but it’s got nothing on these nine of the oldest buildings in the world. 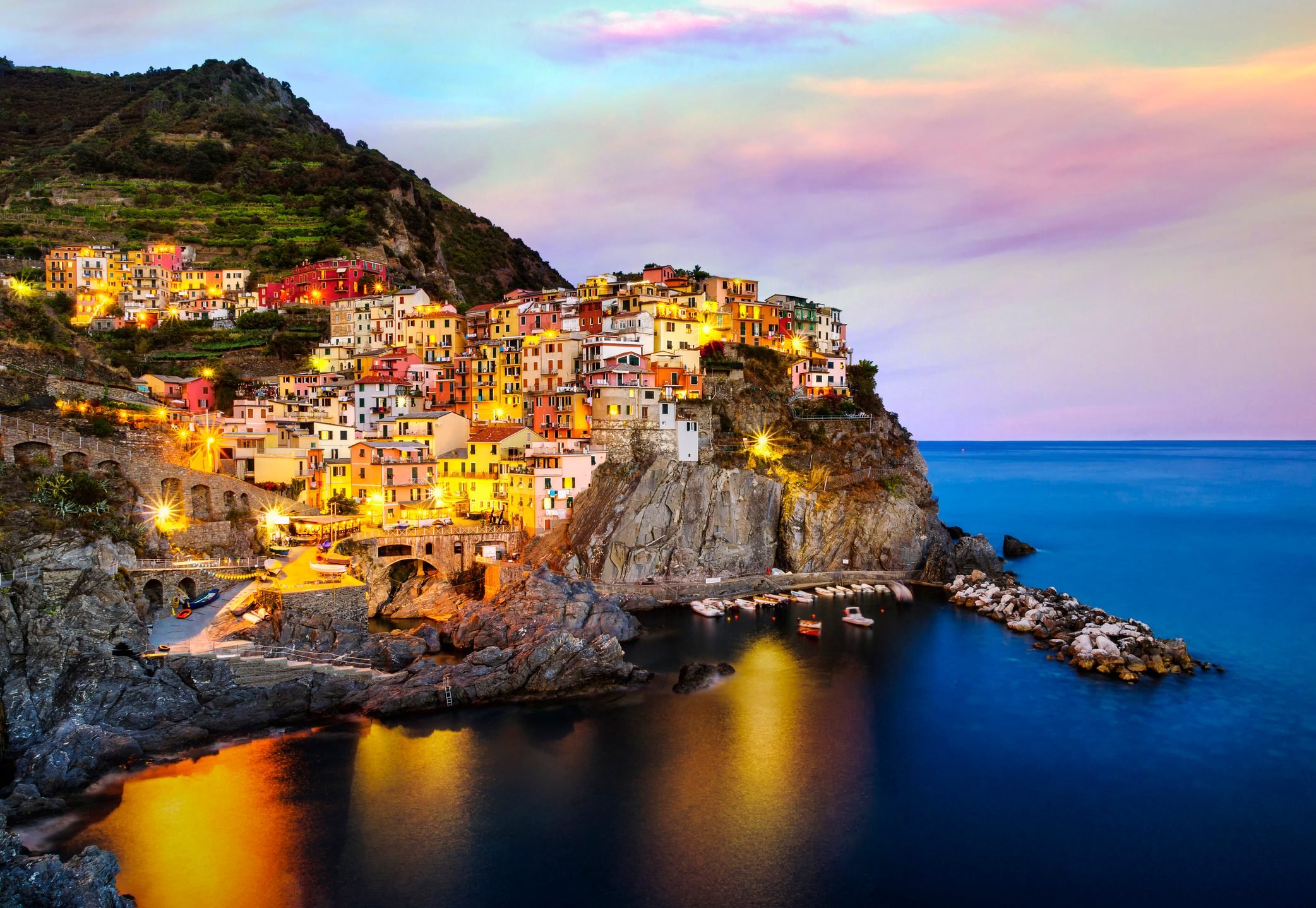 The Mediterranean Sea has several cliffside towns and the villages of Italy’s Cinque Terre are perhaps it’s most famous. The Cinque Terre are five seaside villages linked by cliffside hiking trails and by a train, on Italy’s Ligurian coast. The Cinque Terre, its colorful buildings, and grape- and olive-strewn cliffs were made a UNESCO World Heritage Site in 1997. UNESCO sites make for great travel destinations, like these 10 awe-inspiring UNESCO World Heritage Sites everyone needs to visit. The town of Manarola, pictured here, is 230 feet above the sea. The church’s bell tower was reportedly the best spot in town to keep watch for pirates. Manarola is connected to Riomaggiore by a walking path carved into the cliff called Via dell’Amore or Lover’s Lane. 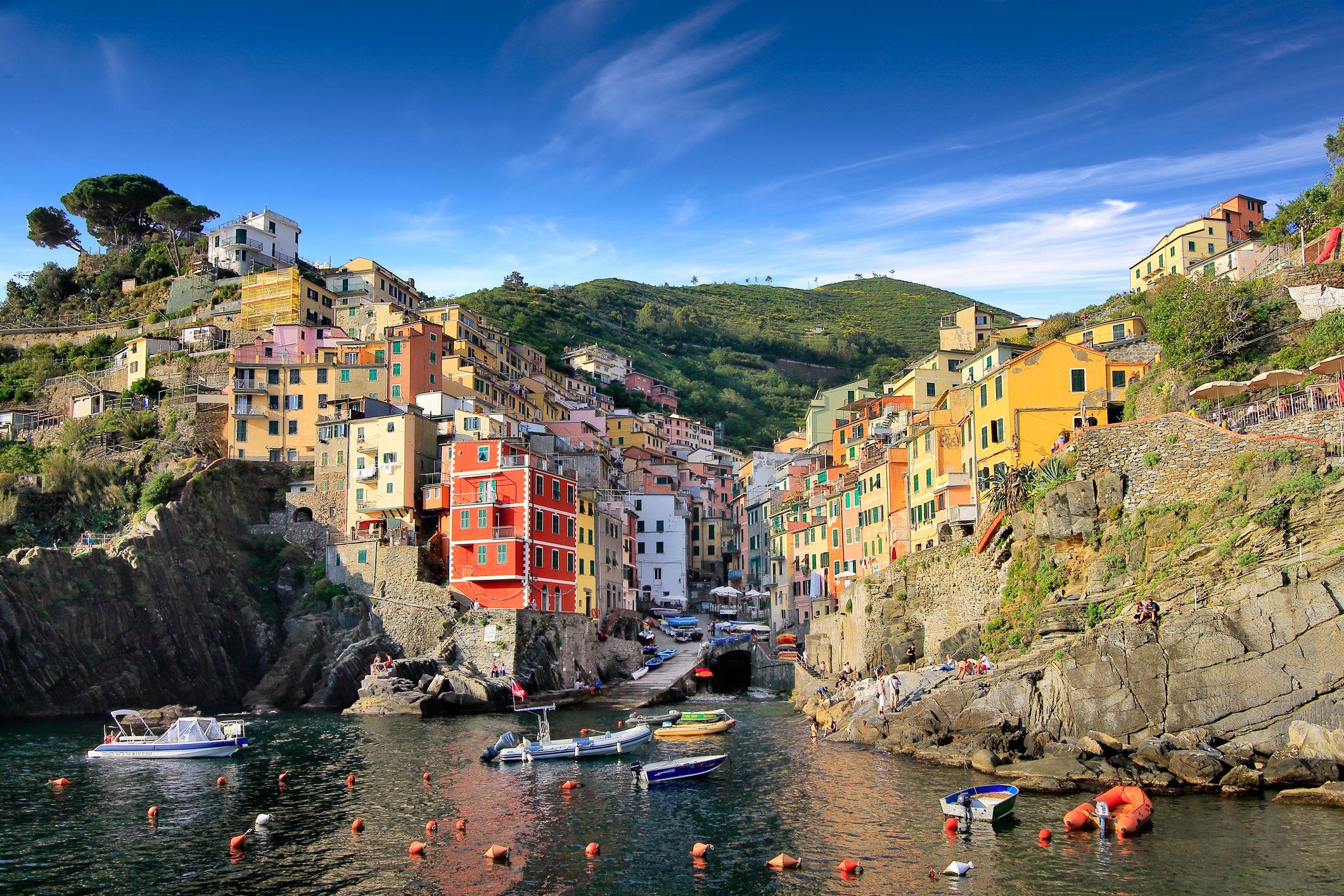 The Cinque Terre towns top this list of the 15 most colorful cities in the world thanks to their beautiful buildings. Riomaggiore is the most eastern and southern village of the Cinque Terre, and the best place to start if you’d like to hike the eight miles through all five colorful villages. The first inhabitants in Riomaggiore weren’t overly interested in a beautiful place to live, though. Instead, it was much more important that they have a location safe from pirate raids and with a mild climate to grow grapes and olives. Two ideal spots originally for watching for pirates—but now for admiring the coast—are the Castle of Riomaggiore (built in 1260) and, at more than 1,100 feet above the sea, the Sanctuary of Madonna di Montenero. From the latter, you can see the entire Cinque Terre coast. Other top sites within the town are the Church of San Lorenzo which was built in 1338 and the Church of San Giovanni Battista, built in 1340. 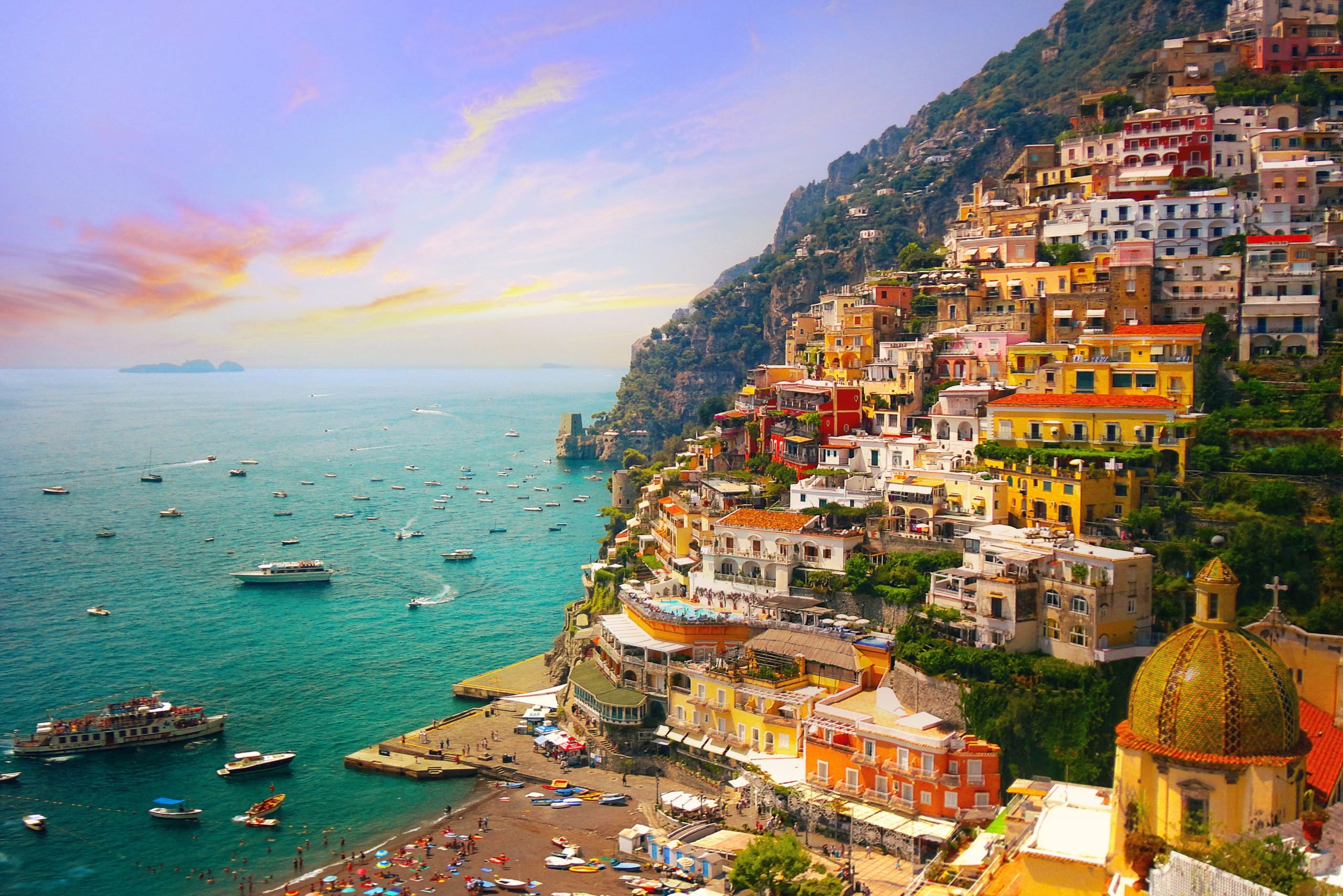 Down the coast from Cinque Terre, on the Amalfi Coast, is Positano. The houses on the treed cliffs of Monti Lattari are also colorful, painted bright yellow, pink, and white. Positano’s history is of a popular spot for ancient Romans to relax, and the town itself developed around a 9th-century abbey. Positano, like several other parts of the Amalfi coast, was damaged in 1343 by an earthquake and resulting tsunami. Like other cliffside towns, Positano had a defensive location. However, the cliffside location wasn’t enough to protect Positano from pirates, and so the residents strengthened their fortifications by building walls and watchtowers. Thick walls and watchtowers were a crucial part of defense in medieval times, as you can see in some of these photos of the 30 most gorgeous medieval castles in the world. 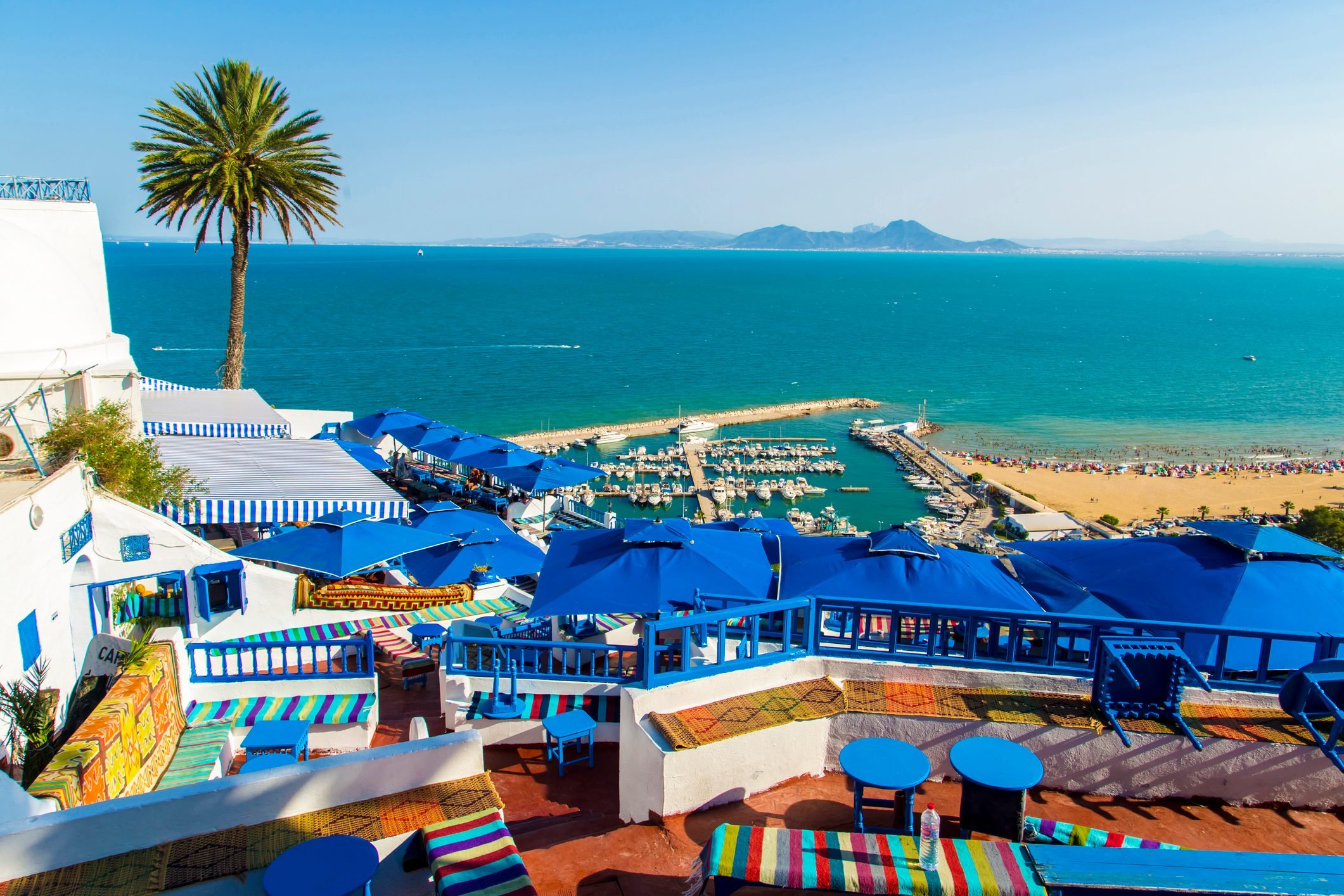 On the other side of the Mediterranean from Italy is Tunisia, with architecture and history that dates back centuries before medieval times. A popular tourist spot on Tunisia’s coast is the cliffside town of Sidi Bou Said. Before the pandemic, Tunisia was on this list of 20 places you need to go in 2020 according to travel experts. Famous for its whitewashed buildings with blue trim, Sidi Bou Said sits high above the Bay of Tunis and a sailboat-filled harbor. The blue-and-white architecture is Andalusian and Ottoman and, given the popularity of the town with tourists, the buildings are used for cafés, shops, galleries, and hotels. Designer Azzedine Alaȉa’s former house has been turned into an art gallery. In Sidi Bou Said, the best views of the Med and nearby Carthage and Tunis are from the Mausoleum of Abu Said el Baji, the Christian-saint-turned-Sufi-teacher for whom the village is named. 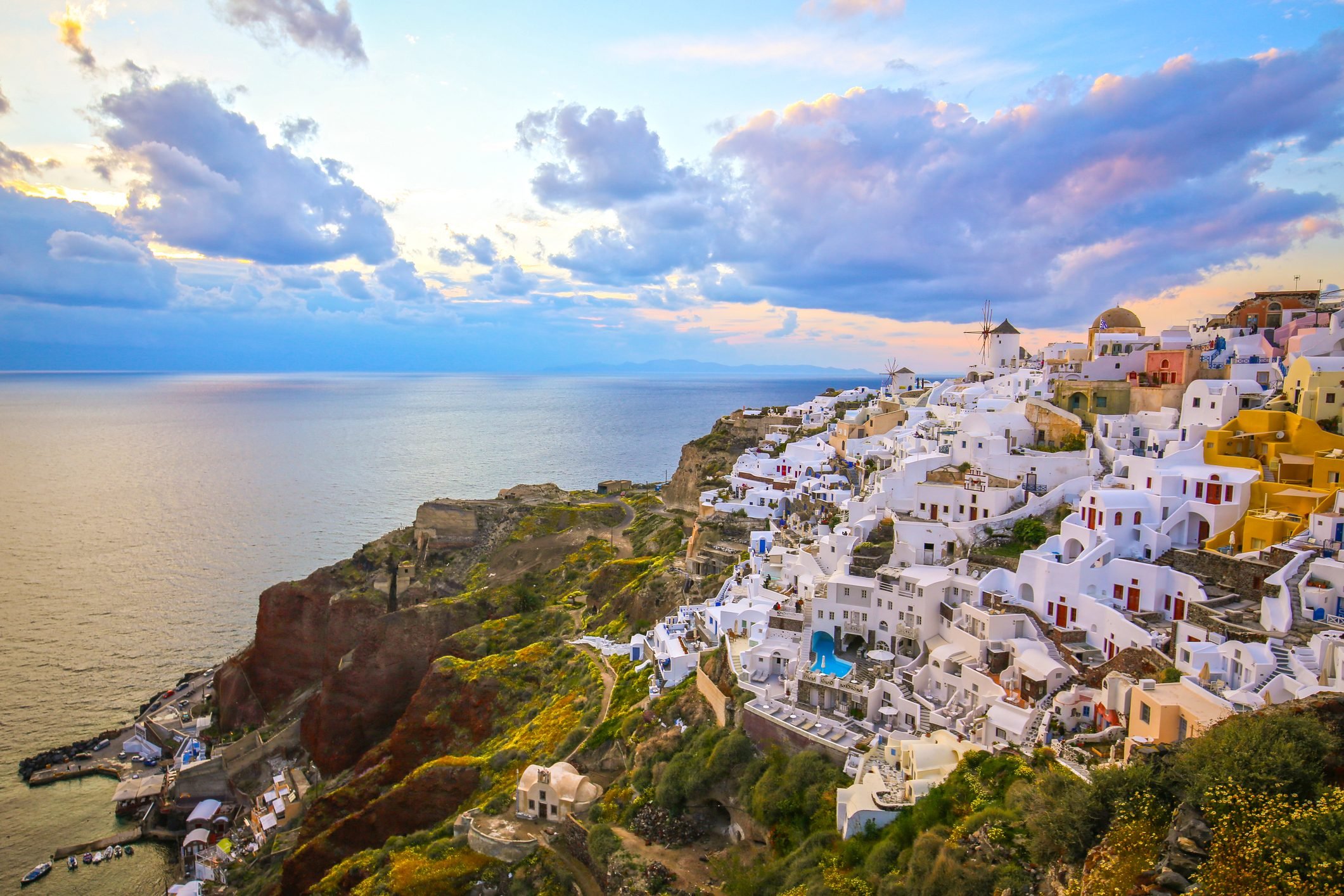 To the east of Sidi Bou Said and Tunisia is the Greek island of Santorini, also known for its white and blue architecture high above the sea. The island is an active volcano, though its last eruption was 3,600 years ago. Here are another five volcanoes you can explore from your couch. Santorini’s capital city is called Firá and it sits on the edge of the volcano’s caldera, or crater, which is covered by the sea. You can walk from Firá to the next-door towns of Firostefani and Imerovigli to admire the island’s particularly beautiful sunsets from each of its cliffside towns. The most exclusive village is Oia, in the north. To the west, on France’s island of Corsica, is Bonifacio, the city known as the Citadel of Cliffs. Bonifacio is a medieval town built on Corsica’s white limestone cliffs. It’s also known as Bunifaziu—Corsica and the Italian island of Sardinia were once connected until volcanic activity separated them into two islands, which eventually belonged to two different nations. The residents of the Citadel of Cliffs and neighboring towns speak a French-Italian dialect.

Bonifacio is the oldest town on Corsica, founded in the early 800s, and is supposedly where Odysseus had his poetic run-in with the cannibalistic Laestrygonoians. You can descend from the top of the cliffs down to the sea by a steep stone staircase called the Staircase of King Aragon Alfonso V. Like staircases? Check out these 12 photos of the world’s grandest staircases. 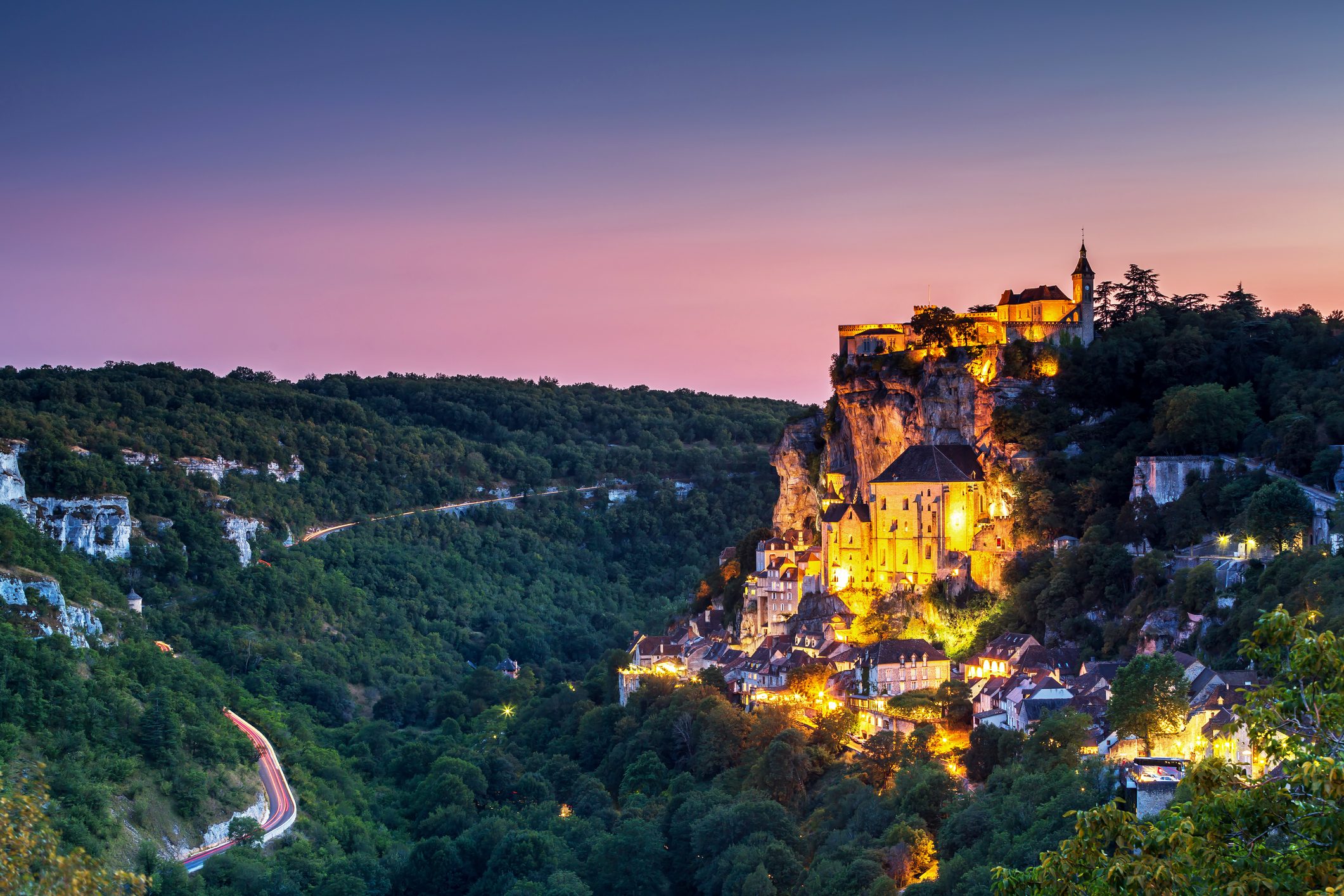 Also in France is the sacred city of Rocamadour in the Dordogne Valley. Built on three levels of cliffs overlooking the Alzou Canyon, Rocamadour is a medieval city towering almost 400 feet from the valley below. The car-free town has just one street and from it, you can climb the 216 steep steps of the Great Staircase halfway up the cliff to a square with eight churches.

Pilgrims have come here for hundreds of years to worship, and that makes Rocamadour a place to be especially careful about being a responsible tourist. That means dressing respectfully and making sure you don’t ignore the ethics of travel photography. Rocamadour’s castle sits atop the village and tourists can walk the ramparts to admire the views of the Alzou Valley. If you want a photo of the sky-high village, they’re best taken from the hamlet of L’Hospitalet. 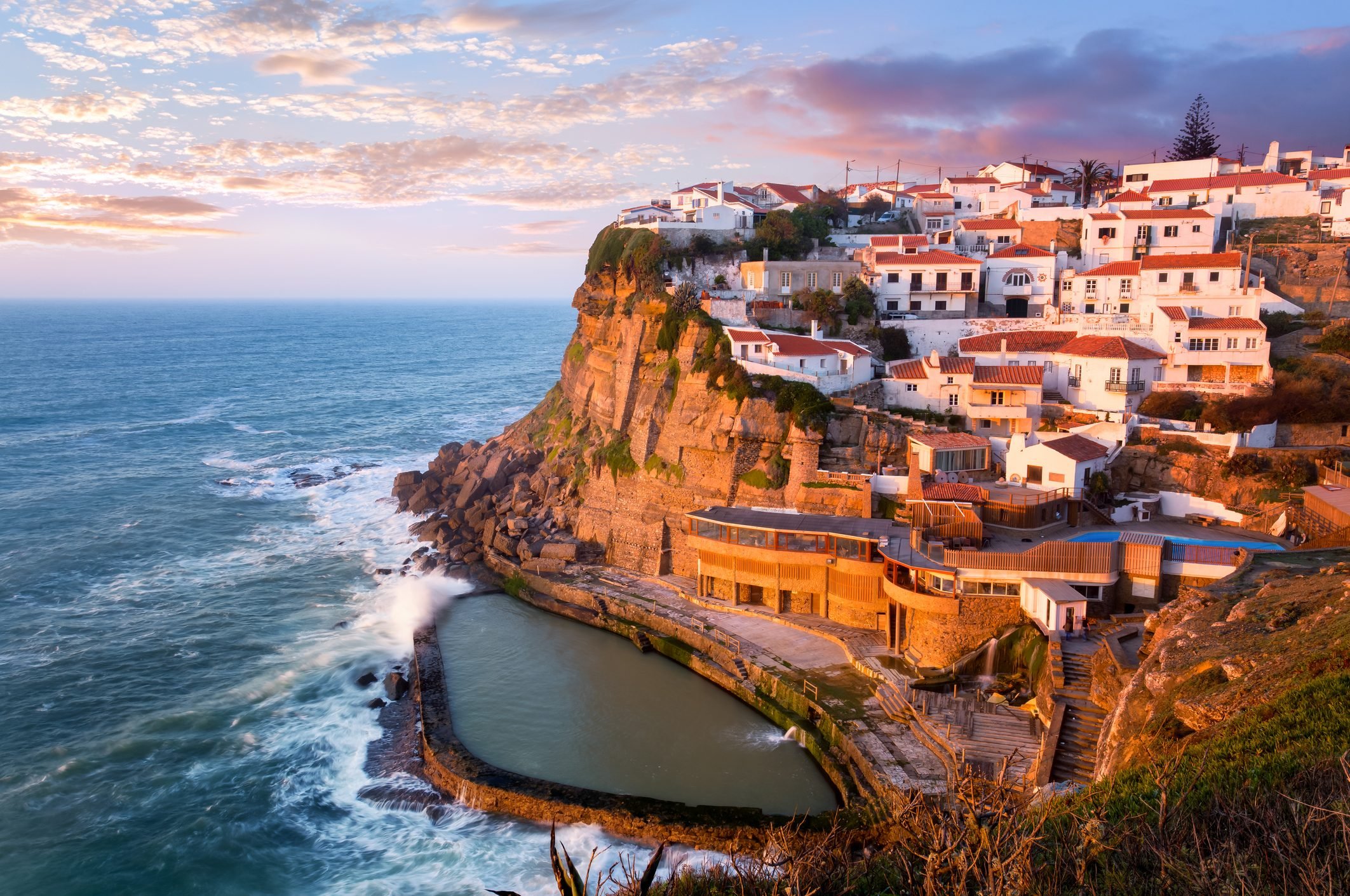 Further west, in Portugal, is the popular tourist area of Sintra and the town of Azenhas do Mar. This tiny fishing village has a population of just 800 people. The town of white buildings with red roofs sits on the cliffs and has a large sea-water swimming pool next to the sandy Atlantic Ocean beach. It might remind you of the Bondi Baths swimming pool near Sydney, Australia, and some of these other 20 most beautiful natural pools in the world. 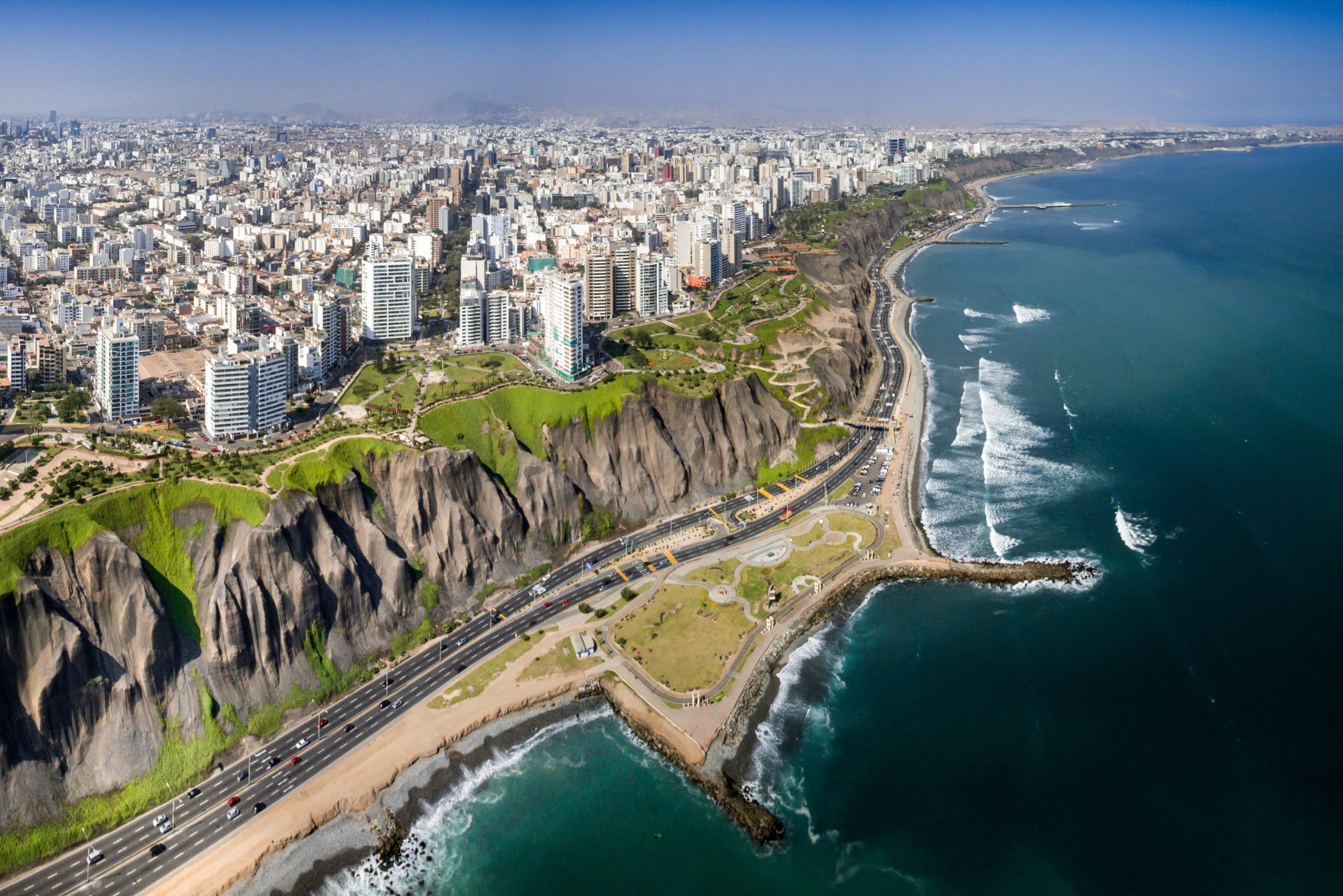 The new world has cliffside cities too, including modern ones. Peru’s Lima sits on the Costa Verde cliffs above the Pacific Ocean. While most of this city of almost 11 million stretches far from the cliffs, the Miraflores neighborhood is a prime place for tourists to admire the views from the cliffs. Down below in the Pacific are surfers and soaring above the cliffs are colorful paragliders. Tourists who want an even higher view of this city and its high cliffs can take a flying ride tandem with a pro. Next, be sure to check out these 20 small towns that look like they’re frozen in time.