20 of the Most Beautiful Natural Pools in the World

Wish you were here. 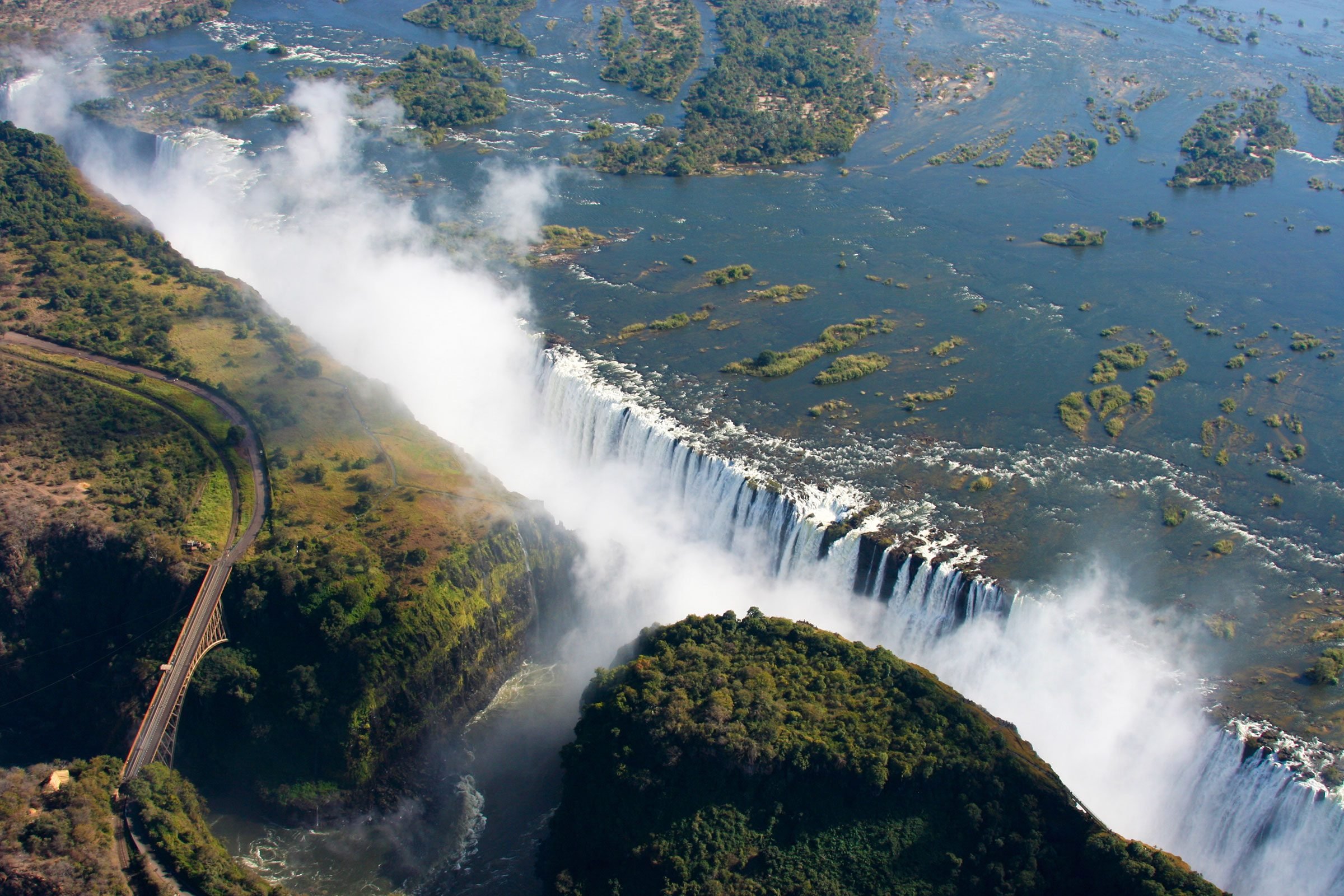 More than twice the height of Niagara Falls, Victoria Falls in southeastern Africa measures in at 355 feet tall and more than 5,500 feet wide. But for some brave souls, the top of the Falls is just another swimming hole. With water levels at their lowest from September to December, swimmers venture into the Devil’s Pool, an area with minimal current, mere feet from where the water gushes hundreds of feet down into the gorge below. Not many natural pools can boast their own waterfalls! If you’re a thrill-seeker, check out these 10 extreme travel adventures around the world. 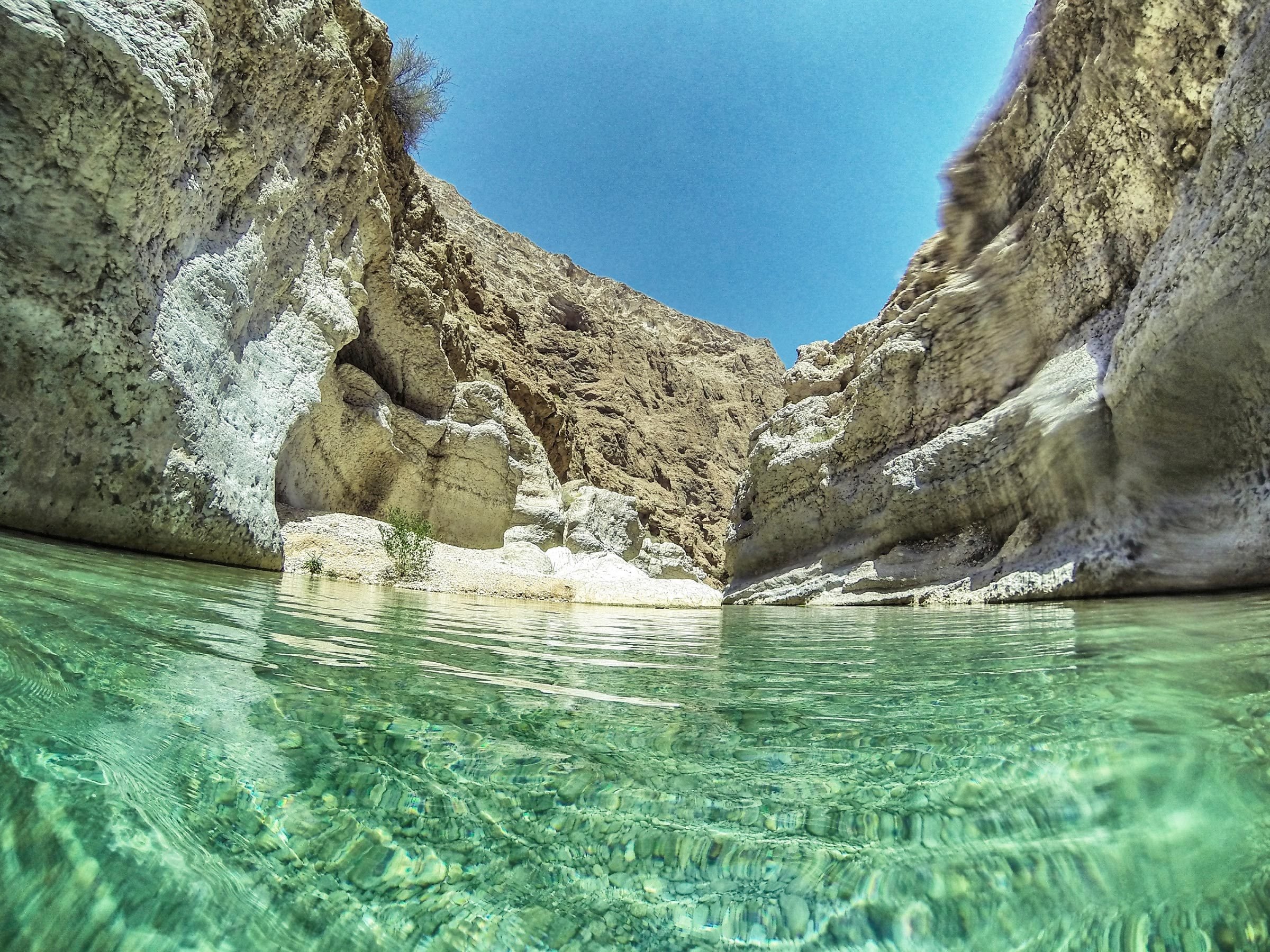 Fed from freshwater underground springs that were once used for purification rituals by the Tonkawa Native American tribe, the Barton Springs Pool in Austin, Texas, covers three acres and maintains a temperature of about 68 degrees year-round. Admission to the 18-feet-deep pool ranges from mid-March until the end of September. For residents, the cost is $3 for adults and $1 for kids (non-residents pay $8 for adults and $3 for kids).

A 15-minute drive from Sydney, Australia, where the country’s southeastern coast meets the Tasman Sea, sits The Bondi Baths at Bondi Icebergs. The historic 50-meter public saltwater pool has been around for more than a century and features a small beach, bar, and kiddie pool—not to mention the occasional wave crashing harmlessly into the pool. The entry fee ($7 for adults; $5 for kids) isn’t much considering the million-dollar view. Here’s a list of the best places to travel to for every month of the year. 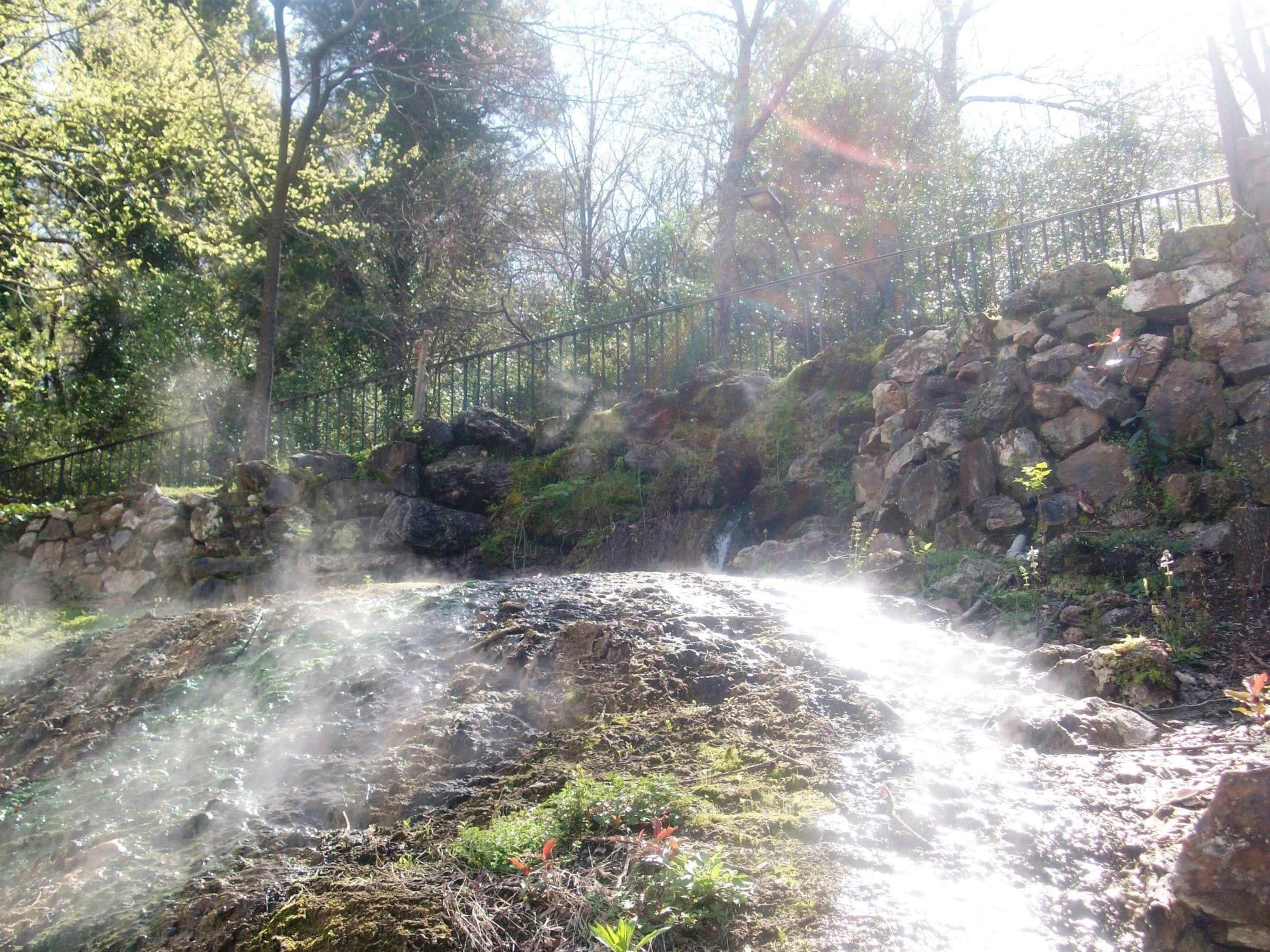 Located in Hot Springs, Arkansas, Hot Springs National Park was designated by President Andrew Jackson as a special reservation in 1832. The 47,143-degree natural pools and springs within the 5,500-acre nature reserve have been a sanctuary for those seeking healing and solace for more than a century. Here are more of the most gorgeous hot springs in the world. 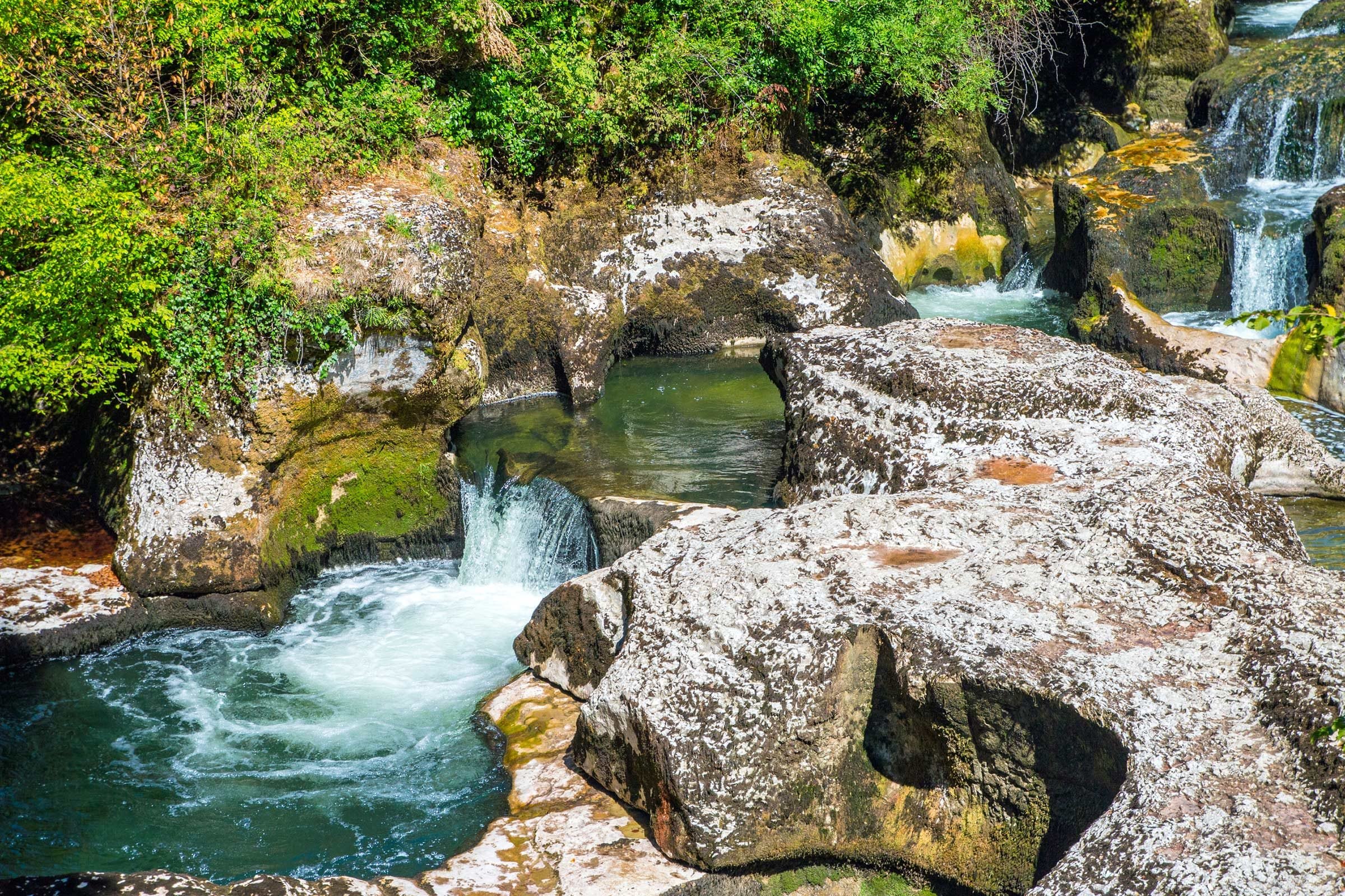 The East Fork Black River in southeastern Missouri cascades over and around billion-year-old lava rock to form dozens of small rivulets and wading pools in the 8,550 acres Johnson’s Shut-Ins State Park. These are the 14 most enchanting places in the world that look like they came straight out of a fairytale. 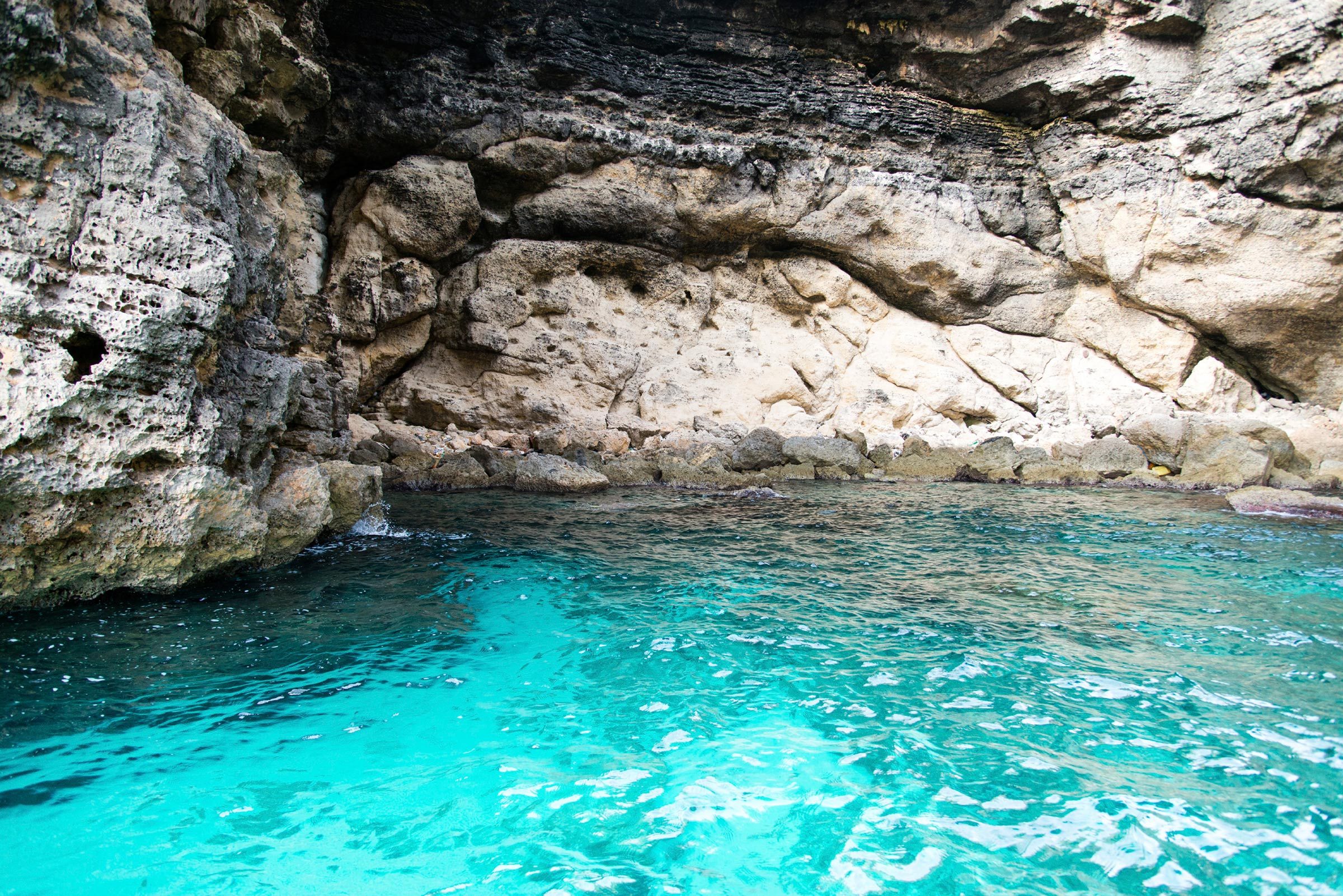 Does floating in a secluded 100-feet-deep freshwater pool so pristine that it glimmers with a shade of cobalt blue sound like paradise to you? Then check out the Dudu Blue Lagoons, located near the town of Cabrera on the northeastern coast of the Dominican Republic. The lagoon also features underwater caves, making it a popular scuba diving destination.

Tons of natural swimming holes, known as cenotes, cover the Yucatán Peninsula in Mexico, but Ik Kil is deemed to be the most beautiful cenote, by far. Not only is the deep blue pool surrounded by hanging vines and serene rainforests, but it’s also a mere walking distance from the Mayan ruins of Chichen Itza.

These breathtaking waterfalls and blue-green natural pools can be found on the Havasupai Indian Reservation within Havasu Canyon in Arizona. Each year, the spectacular Havasu Falls attracts thousands of visitors. Don’t miss these gorgeous waterfalls from all 50 states.

Volcanic eruptions on the Upolu island in Samoa created this stunning aquamarine grotto. Sua Ocean Trench literally translates into a “big hole”—the perfect name for a 98-foot deep pool. Visitors can descend into the tranquil waters by climbing down a long wooden ladder. Check out these new hot spots throughout the world that are gaining immense popularity.

The legend has it that a beautiful princess used to come and bathe in this sinkhole in Roca, Italy. Poets from all over Southern Italy came to be inspired by her beauty, and that’s how the name “Cave of Poetry” came about. Today, people from all over the world come to enjoy the turquoise waters. Check out these gorgeous beaches with the clearest water in the world.

Located on the Galapagos, Las Grietas is a place where ocean water creates a natural pool between two volcanic crevices. There’s also a coral reef underneath, so you can both swim or go snorkeling here. Here are some other natural wonders you won’t believe are real.

Located on the Isle of Skye, Scotland, Fairy Pools are a truly magnificent sight. A series of waterfalls from the Cuillin Mountains feed the rock pools, creating gorgeous water bodies. You can swim here, but it’s advised to wear a wetsuit as the water is pretty cold.

Giola Lagoon is a natural rock pool on the island of Thasos, Greece. This isolated gem can be reached by a drive followed by a short hike, and then you can dive right into the lagoon. Giola Lagoon is turquoise, but still, check out these naturally beautiful pink lakes.

The Blue Lagoon truly looks like a magical place. It is a geothermal spa in southwestern Iceland in the heart of a volcanic landscape. It’s a popular destination for tourists looking for a rejuvenating experience.

Fingal’s Cave is a sea cave on the uninhabited island of Staffa, Scotland. The cave is known for its natural acoustics. The acoustics are so famous that composer Felix Mendelssohn visited Fingal’s Cave in 1829 and wrote an overture, The Hebrides, Op. 26, inspired by the echoes. Here are other gorgeous sea caves worth checking out.

Located in West Thailand, Erawan Falls is one of the most popular falls in all of Thailand. The emerald green ponds under the seven-tiered falls make for a fairytale-like place.

Cenote Samula is a magical destination located in the Yucatan Peninsula of Mexico. It makes for a perfect swim where you’re almost completely enclosed in a cave, with the exception of a small, natural hole in the roof that forms a spotlight on the water. Here some hidden gems you can find without having to leave the country.

Fuentas Georginas are beautiful hot springs in Guatemala. They were named after the wife of dictator Jorge Ubico, who frequently visited the Fuentas.

Tolantongo caves are a collection of hot spring pools built into a cliff in Hidalgo, Mexico. They overlook a picturesque canyon and make a sight that is very hard to beat.

Queen’s Bath is a favorite summertime attraction in Kauai, Hawaii. Fresh saltwater from the Pacific Ocean spills over the lava rocks to create a beautiful natural tide pool complete with its very own fish. Next, don’t miss the 15 most colorful natural wonders in the world.