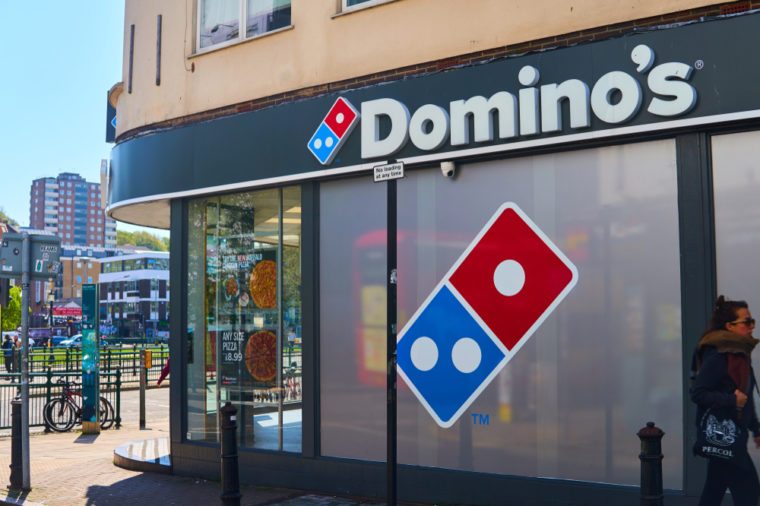 You’re not alone if you’ve never understood the connection between games and takeout. Long before Domino’s rebranded to expand beyond pizza, it was called DomiNick’s Pizza after its owner, Dominick DiVarti. He sold the restaurant to some friends, but when they started expanding, DiVarti didn’t want his name on the new shops. So a pizza deliverer came up with an alternative: Domino’s. Learn how more of your favorite pizza brands got their names. 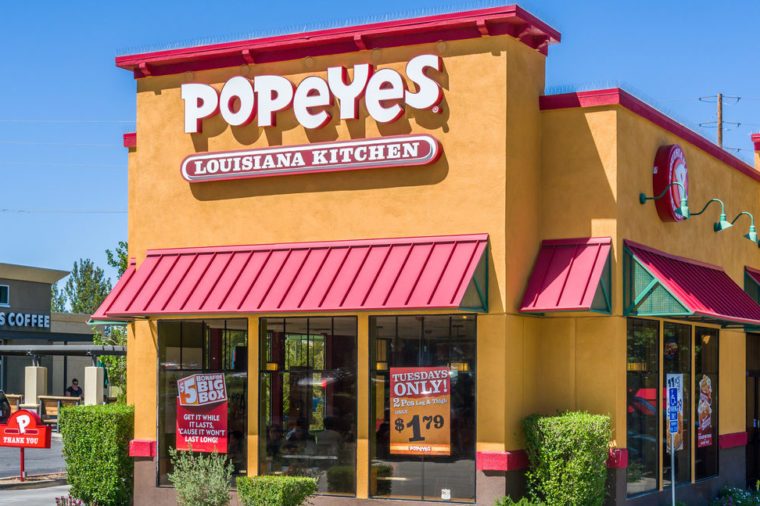 Apparently, customers are in no rush to go to a restaurant called Chicken on the Run. When the fried chicken restaurant struggled after its grand opening in 1972, the founder reopened it as Popeyes Chicken. The name wasn’t in reference to a spinach-loving sailor but to detective Jimmy “Popeye” Doyle from The French Connection. 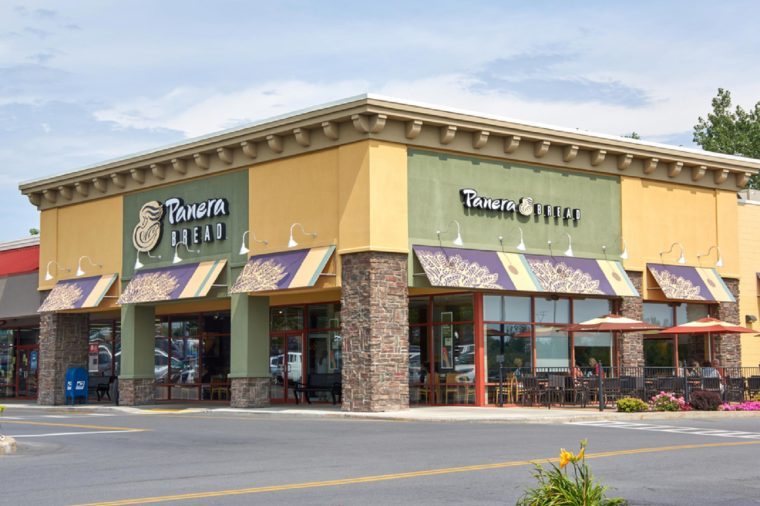 Au Bon Pain was going strong in the early 1990s, but founder Ron Shaich wanted more. When the owners of Saint Louis Bread Company showed him their own bread-focused chain, Shaich was impressed and bought the 19 locations in hopes of hitting a suburban market. Realizing St. Louis Bread Co. doesn’t have a universal appeal, he made up a word that conjures images of breadbaskets: Panera. He later sold Au Bon Pain to focus on his new baby. Check out these other 10 secrets you never knew about Panera. 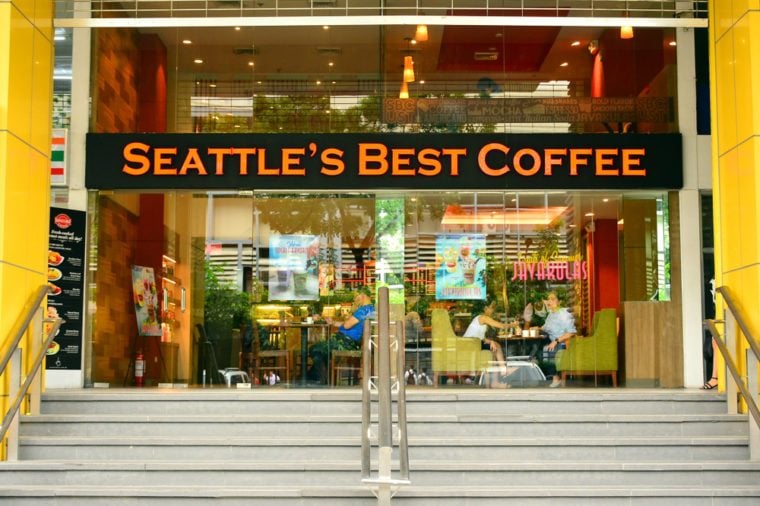 In the 1970s, Seattle dwellers looking for a caffeine fix might have headed to The Wet Whisker for coffee and ice cream. As you might imagine, the founder realized a new name would help him “compete in the market,” so he turned it into Stewart Brothers Coffee in the early 1980s. But that wasn’t the end of the story—Stewarts Private Blend Coffee all the way in Chicago caught wind of their shop and called the shop out for copyright issues. Stewart Brothers Coffee could keep its SBC logo, and fate would decide what the initials would end up standing for. SBC won a local competition for the best coffee in the city, and Seattle’s Best Coffee was (re)born. Find out where Starbucks got its name. 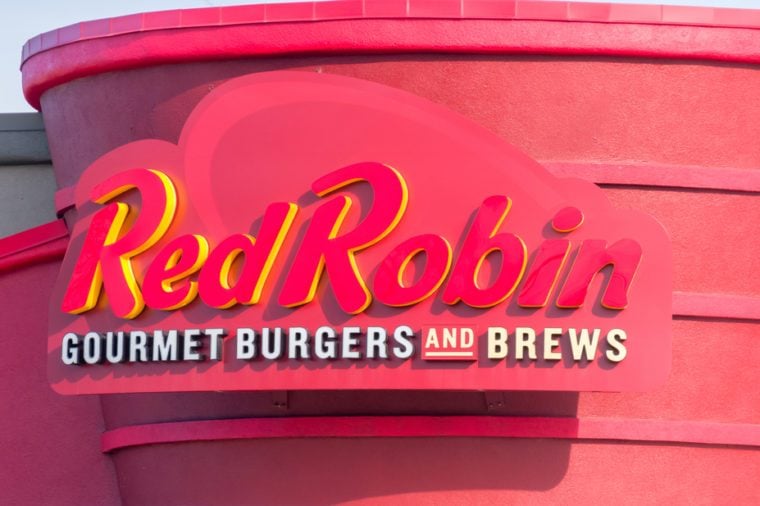 “Reeeed Robin … Yum!” isn’t the only song that goes with the restaurant. When it opened in the 1940s, it was called Sam’s Tavern. The restaurant owner also happened to be a barbershop quartet singer, and one of his favorite ditties was “When the Red, Red Robin (Comes Bob, Bob, Bobbin’ Along).” He loved the song so much that he changed the name to Sam’s Red Robin. When another entrepreneur bought and franchised the restaurant, he shortened the name to Red Robin. 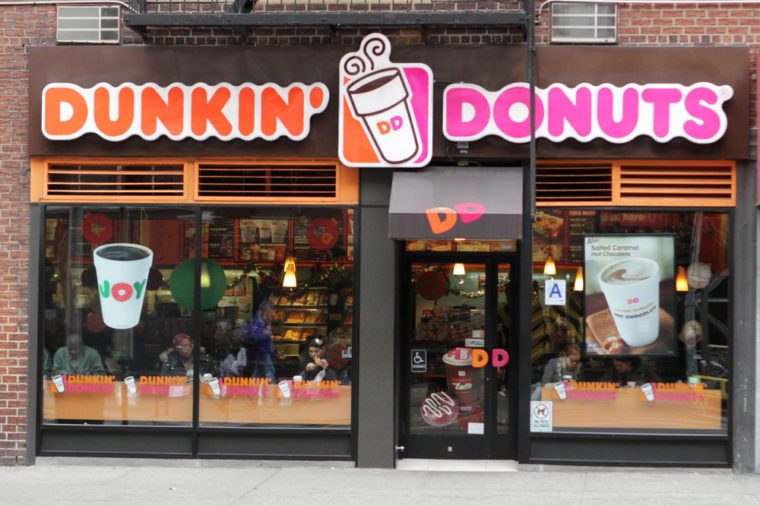 Dunkin’s original name didn’t conjure up images of doughnuts or coffee to dunk them in. Two years after opening his Open Kettle restaurant, the founder and his executives decided to switch the name to Dunkin Donuts, forever confusing Americans about how to spell doughnut. This is what the first locations of famous fast food restaurants looked like. 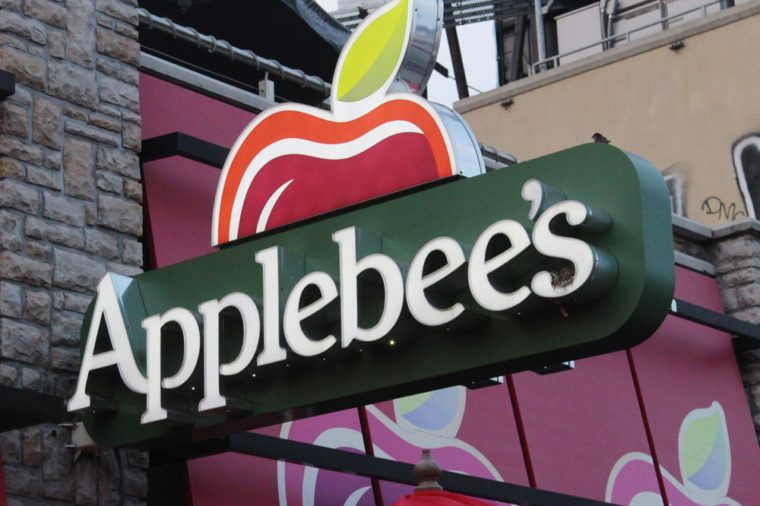 Applebee’s wasn’t always just a place for half-price appetizers. When it opened in 1980, it was called T.J. Applebee’s Rx for Edibles & Elixirs. You can understand why it became Applebee’s Neighborhood Grill & Bar six years later. 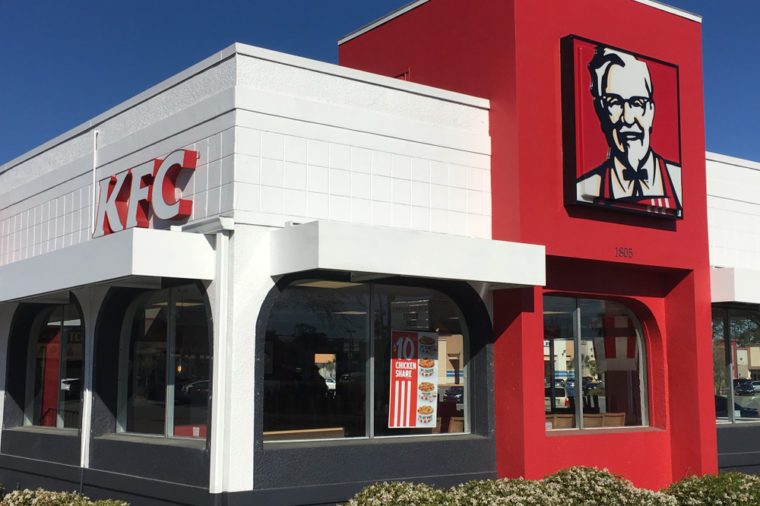 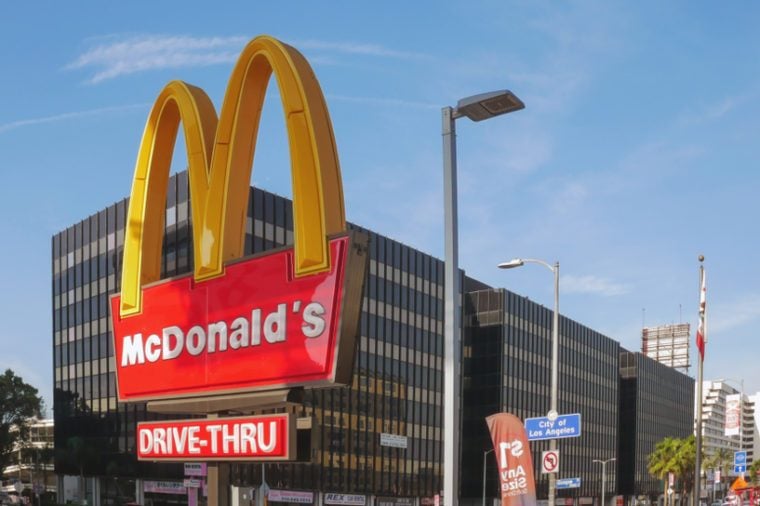 A McDonald’s burger probably seems a far cry from what you’d flip on your own backyard grill, but its first restaurant wasn’t the grab-and-go meal you’d get today. Dick and Mac McDonald first opened McDonald’s Bar-B-Q in California in 1940 as a drive-in with car hops and an extensive menu. Toward the end of the decade, they revamped to a streamlined the menu, made it self-serve, and simplified its name as McDonald’s. Find out what was on the first McDonald’s menu. 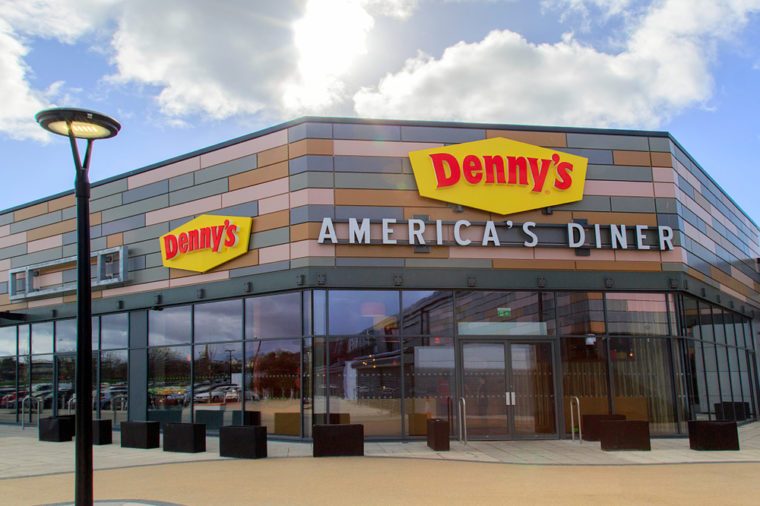 Spoiler alert: Denny isn’t a real person. The chain opened its first location in 1953 as Danny’s Donuts—not quite the Grand Slam-slinging diner you’d think of today. When one of the two co-founders left a few years later, the other tweaked the concept to focus on coffee, turning it into Danny’s Coffee Shops and leaving the doors open 24 hours. But when customers started to confuse it with Coffee Dan’s in Los Angeles, the name was again changed to Denny’s Coffee Shops. By 1961, that became the short-and-sweet Denny’s. 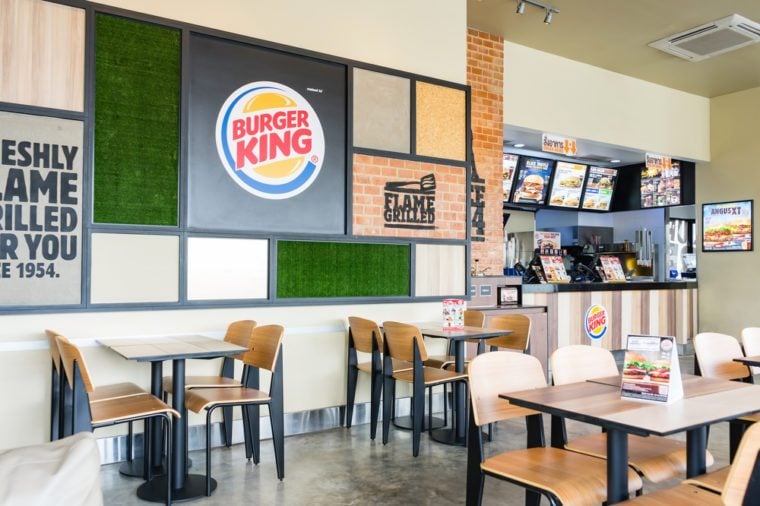 Burger King doesn’t share a lot about its own history, but sources say it has its roots in a 1953 Florida restaurant called Insta-Burger King, using an Insta-Broiler to cook the patties. 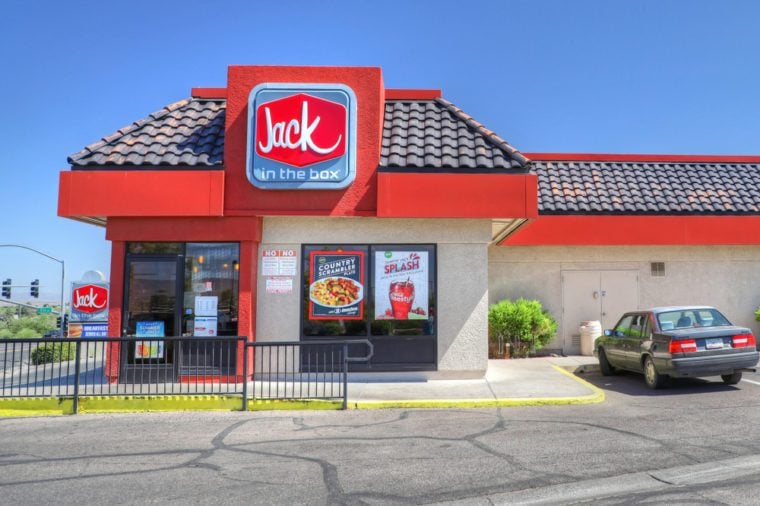 Jack in the Box

Before there was Jack in the Box, there was Topsy’s drive-in. Founder Oscar Peterson later tweaked the concept to a drive-through and changed the name to his own (Oscar’s) but eventually had even bigger dreams. Drive-throughs already existed, but Peterson did something revolutionary by hooking up a two-way speaker to a plastic clown for his famous Jack in the Box franchise. These are the origins of 14 other company names. 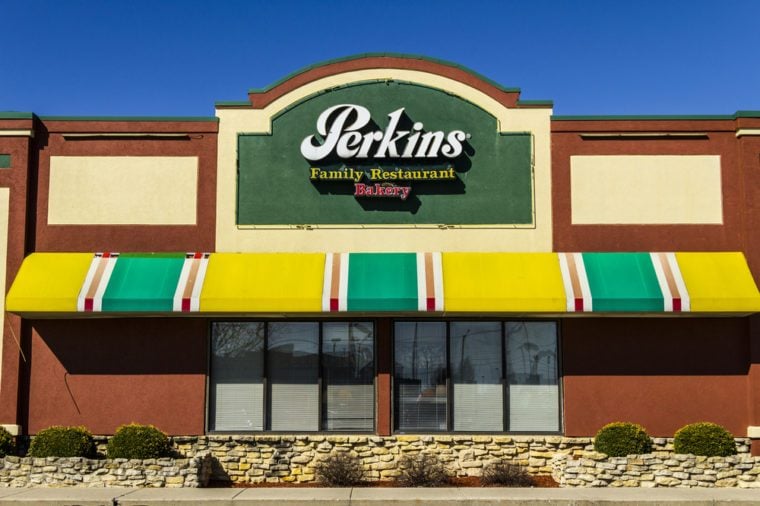 The original Perkins in Cincinnati, Ohio, had one thing in mind: pancakes. It opened its doors in 1958 as Perkins Pancake House. But as IHOP didn’t learn until recently, a “pancake house” name can be limiting. The franchise changed its name to Perkins Cake and Steak, hoping to highlight its other entrees. In the 1980s, it became Perkins Family Restaurant before later settling on Perkins Restaurant & Bakery. The more generic, the better, in Perkins’s case. 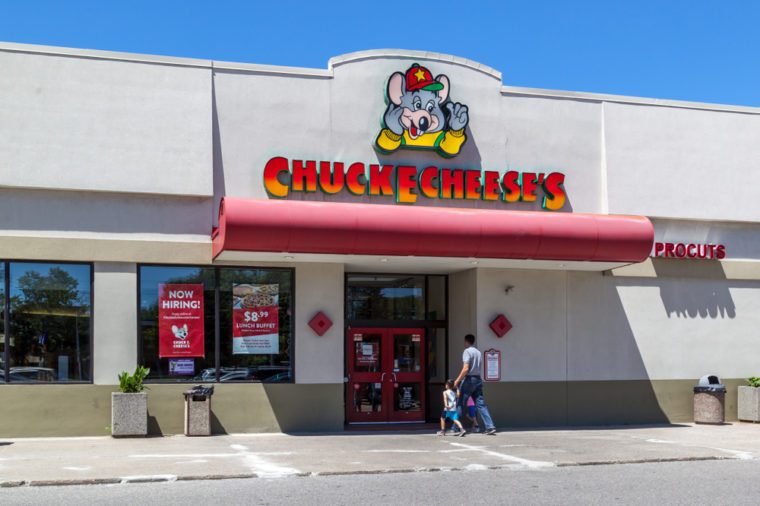 At Chuck E. Cheese’s, you’d probably rather put your focus on Skee-Ball and pizza than the creepy robot band that’s finally being phased out. But in 1977, when the food-forward arcade opened, the animatrons were a focus in Chuck E. Cheese’s Pizza Time Theatre. 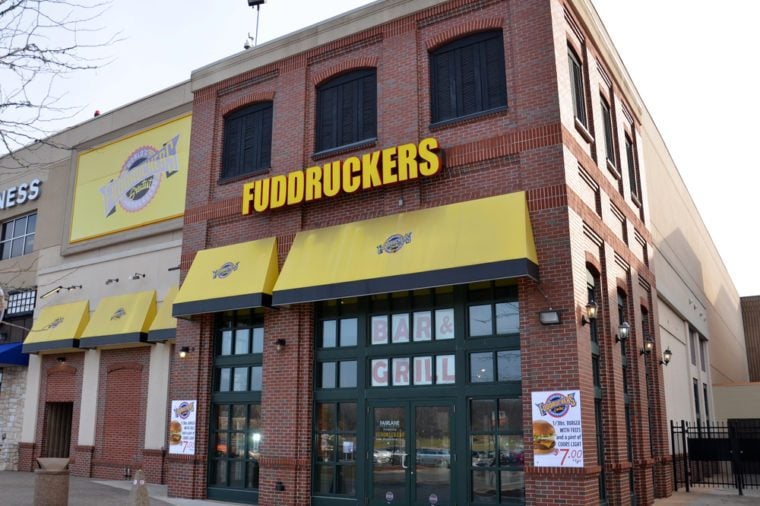 Saying “Fuddruckers” out loud is a sure way to spark a smile. The burger joint’s original name was just as odd but at least provided a bit of context: Freddie Fuddruckers. No word on why founder Philip J. Romano chose that name, but we won’t question it. 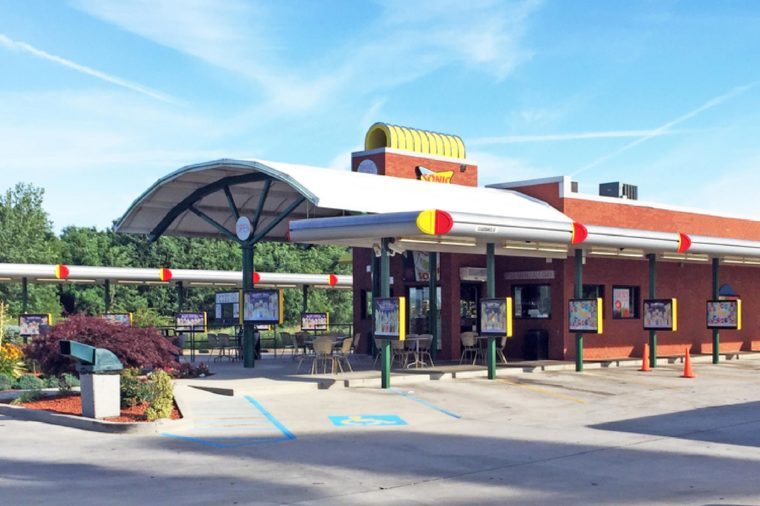 Early versions of Sonic in the 1950s were called Top Hat, but that name didn’t highlight the drive-in’s main feature: speakers that let customers order from their cars. Bragging about its “service at the speed of sound,” the quick-service joint rebranded as Sonic Drive-In in 1959. Don’t miss these other 11 famous companies that originally had very different names.