12 Best Things to Do in Greece

Greece is the word when it comes to dazzling islands, mesmerizing blue seas, incredible history, and spectacular ancient architecture. You'll want to explore it all, but where to start with you Greek odyssey? Here are all the best places to visit in Greece. 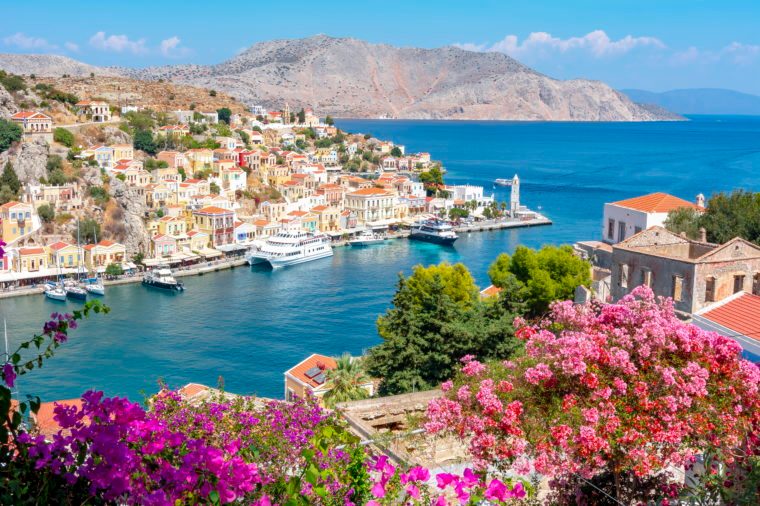 Greece is the word

There’s no place quite like Greece anywhere else in Europe, or the world for the matter. You can wake up sailing the aqua Aegean Sea, lunch in the shadows of UNESCO World Heritage Sites, hike up sacred mountains, and indulge in authentic gyro washed down by ouzo before a night of traditional dancing and maybe even some plate smashing (don’t try that in a fine restaurant though!). How many days in Greece is enough? To make sure there’s enough time to explore historical highlights including the Acropolis and Parthenon in Athens and also spend time on the spectacular beaches, plan at least five days; with more time you can visit additional islands, including perennial favorites such as Santorini, Mykonos, and Crete, all bucket-list-worthy Greek islands you need to visit in your lifetime. 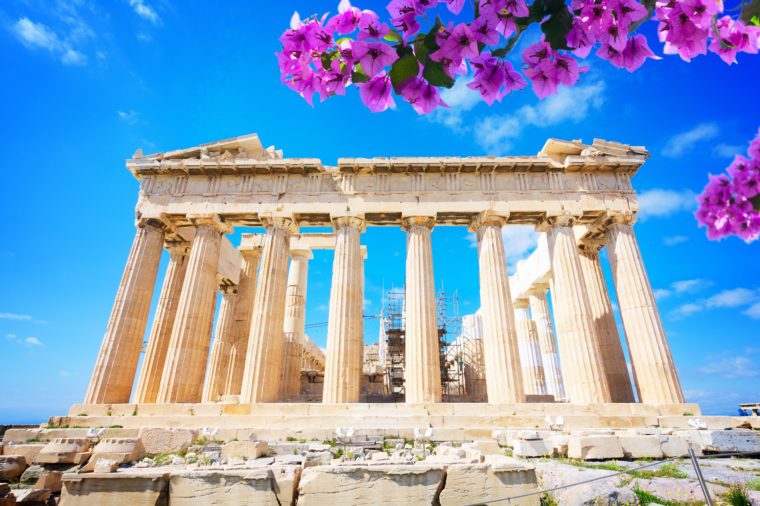 The city of Athens offers a unique mixture of modern buildings and ancient monuments. You’ll find bustling cosmopolitan streets lined with shops and international hotels, but turn any corner and the views of the storied Acropolis appear before you. To fully appreciate the history of the city, known as the birthplace of Western civilization, one of the best things to do in Athens is take a tour of the heart of the city where you’ll pass the Temple of Zeus, Ancient Agora, Syntagma (Constitution) Square, the National Academy, Hadrian’s Arch, the sun-bleached pillars of the Parthenon, and of course, the majestic Acropolis. The views are spectacular from the top of the ruins, but to see all the archaeological treasures from the site, visit the vast new Acropolis Museum, just a few hundred yards south of the archaeological site. Here are some more of the most popular travel destinations in western Europe. 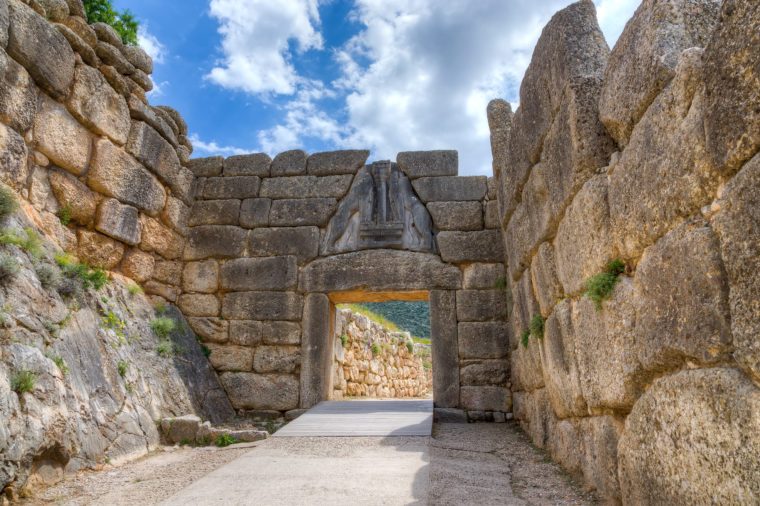 Immerse in mythology in the Peloponnese

Greek mythology buffs take note: The Peloponnese region, a claw-shaped peninsula southwest of Athens, is filled with historical destinations you’ve only read about in books, including the storied halls of Olympus, also known as the temple of Zeus, where the modern-day Olympics were created (we know, so cool!) as well as the Lion Gate of Mycenae, which Homer wrote about in The Odyssey. Visiting the Peloponnese coast is one of the best things to do in Greece; it’s the perfect place to immerse in the blue seas of the Mediterranean by kayaking or sailing, or hiking and biking along the coastline to take in the gorgeous Greek views. Looking for more unique getaways? Try San Marino, the least visited country in Europe. 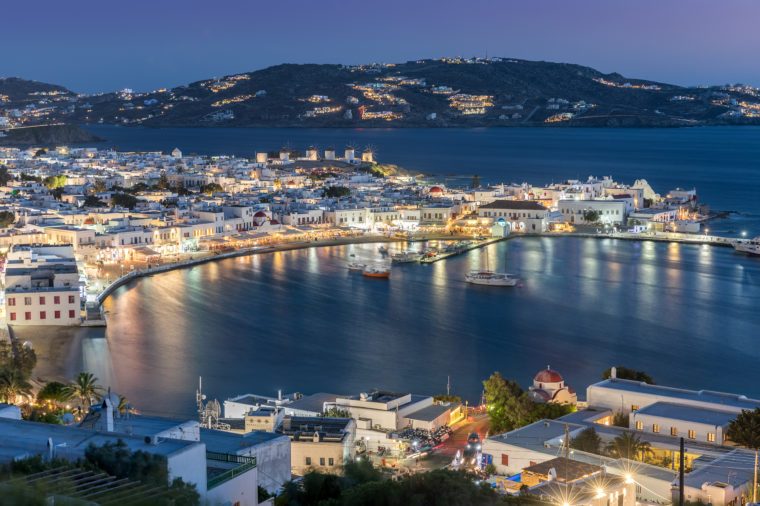 Everywhere you look on this popular island in the Cyclades, you’ll get postcard-perfect views, from the fuchsia bougainvillea draped over whitewashed walls to the cobalt blue roofs and doors on the whitewashed buildings that line the twisting corridors of the old town. Along the port, you’ll also see Little Venice, where the windmills that line the Aegean Sea catch the breeze. But its southern side of the island, far from the cultural highlights, is why it’s one of the most popular places to visit in Greece and where the party starts — and often never stops, during the summer months. Beachfront clubs, including “Paradise” and “Super Paradise” start hopping in the afternoon, get revved up as the sun sets, and then go until the next morning. Expect world-class DJs, nonstop music, and even some reality stars (this is where Lindsey Lohan’s beach club is located). 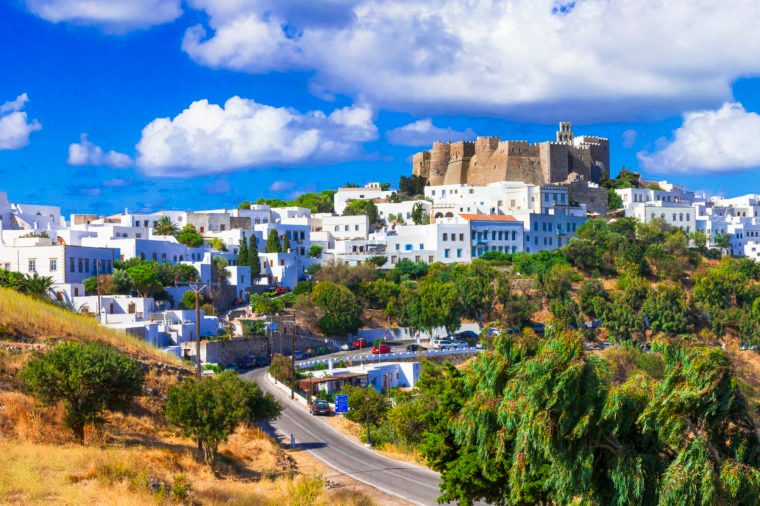 The swankiest Greek island you’ve never heard, Patmos, part of the chain of a dozen Dodecanese Islands, is the secret Greek getaway for the rich and famous; don’t tell them we told you, but George Clooney, Naomi Campbell, and Julia Roberts all have homes here. Part of the allure: Planes don’t fly here, so you can only reach the island by private boat, helicopter, or a tourist deterring nine-hour ferry ride. Once you arrive, stroll the flower-lined, whitewashed passageways, pop into chic shops and beachside tavernas and cafes or rev up an ATV to explore the upper peaks of the island, including a gilded mountaintop monastery, but don’t forget to keep your eyes peeled for everyone from royalty to rock stars. These are more secret island escapes around the world. 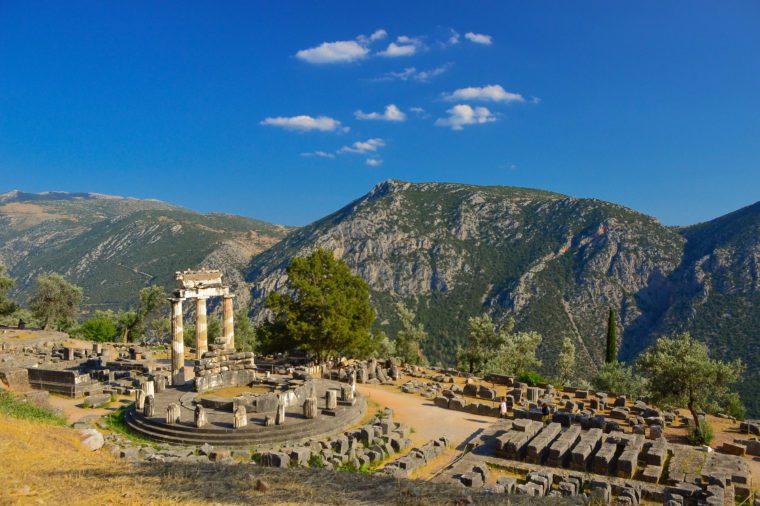 Speak to the gods at Delphi

Chosen by Apollo as the home of his famous oracles who spoke in tongues and were thought to predict the future, the ancient Greeks believed that Delphi, on the slopes of Mount Parnassus, was the actual center of the world. It’s easy to see why when you explore the Sanctuary of Apollo archaeological site; the hilltop temple has views that stretch over verdant olive groves all the way to the sparkling Gulf of Corinth. 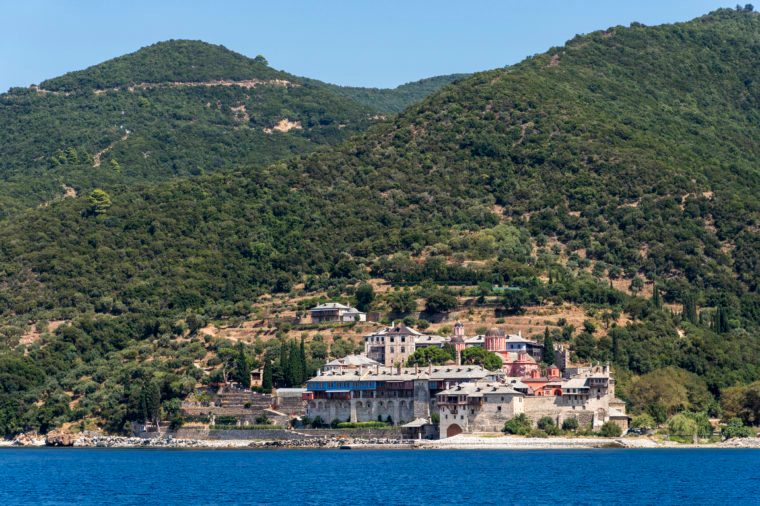 Meet the monks at Mount Athos

This one of the things to do in Greece for the men only; no, we’re not being sexist, just relaying the rules of the Eastern Orthodox church’s most holy site. Mount Athos is the location of 20 monasteries and the home of nearly 2,000 monks, who are all male. Established in the ninth century, it’s the oldest monastic community in the world, and a fascinating step back into history; however, the rules haven’t changed much across the centuries: No women within 500 meters of the shore, lest they distract the monks from their prayers. You’ll find a rich history of religious traditions in these popular eastern European travel destinations, too. 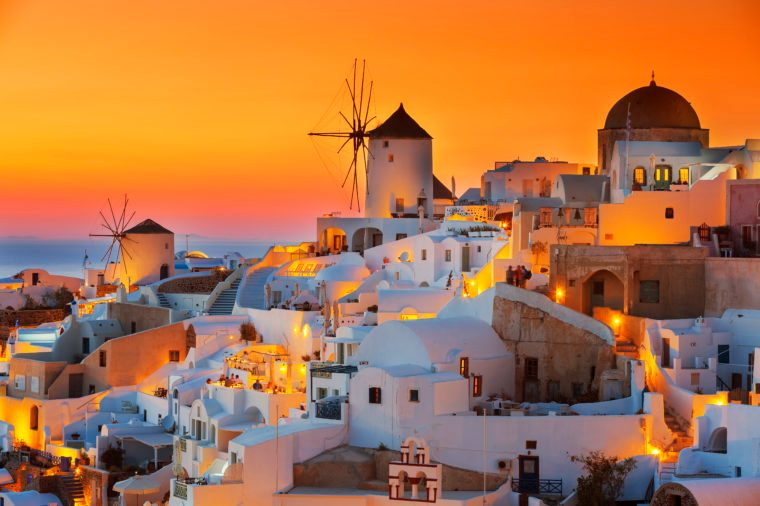 Get romantic on Santorini

There’s something about this idyllic Grecian island that makes you think of romance as soon as you step on its shores. Maybe it’s the mesmerizing mix of volcanic terrain, or the eye-catching architecture (the white houses carved into the cliffs of Fira and Oia are instantly recognizable), or the views of the blue sea from the cliffs, or the way the entire island stops to watch the spectacular sunsets everything evening. Whatever it is, Santorini simply oozes Aegean amour. On a budget? This is the cheapest time to visit Santorini and other top destinations. 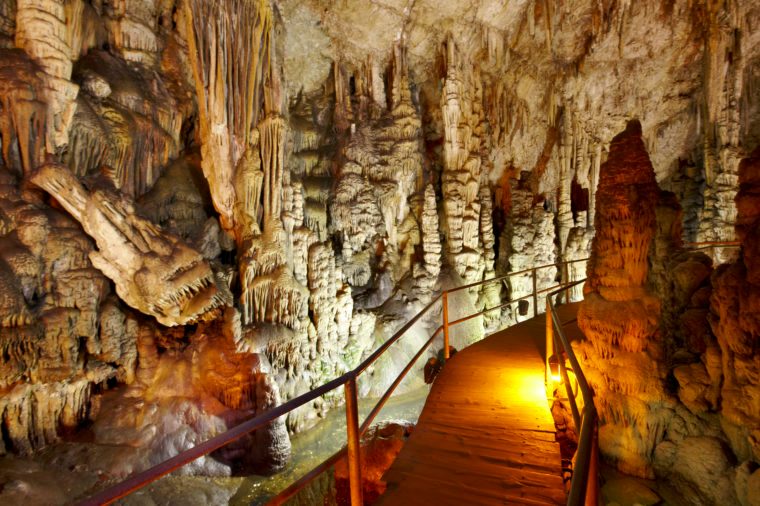 Visit the birthplace of Zeus in Crete

The island of Crete dazzles with its geographical diversity: stretches of palm-backed sand, abundant orchards, rolling hills, vertiginous peaks, mysterious grottoes, and the spectacularly scenic Samariá Gorge. Fans of Greek mythology, however, will want to make a beeline directly to Ideon Cave, storied to be the birthplace of Zeus. After paying your respects to the supreme god of Olympus, head to Knossos, known as “Europe’s oldest city,” and a Bronze Age archeological site. The first settlement is thought to have been built there in 7000 B.C. These are the 10 forbidden places around the globe that no one will ever be able to visit 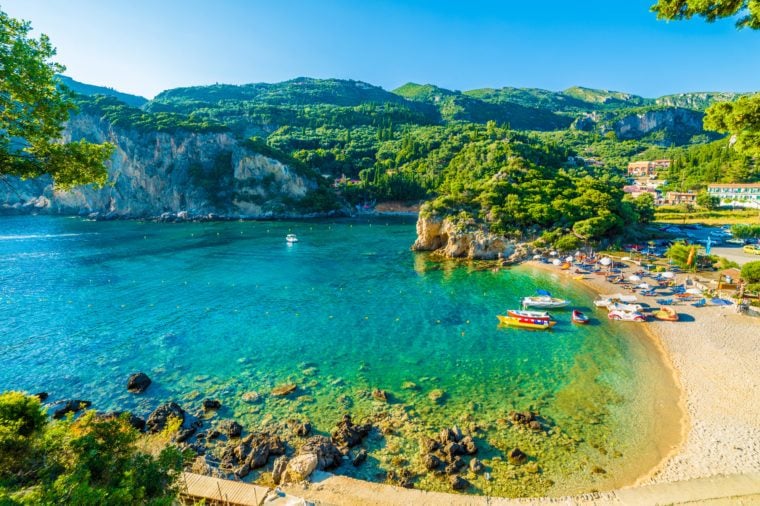 Relax on the beach in Corfu

With 130 miles of sand beaches circling this Greek island in the Ionian Sea, Corfu is the ultimate place to find relaxation with views of the blue sea. It also offers a smorgasbord of activities to keep everyone entertained, from museums, a monastery, waterpark, and even a donkey rescue center. You’ll also want to see these 10 beaches with crystal clear water around the world. 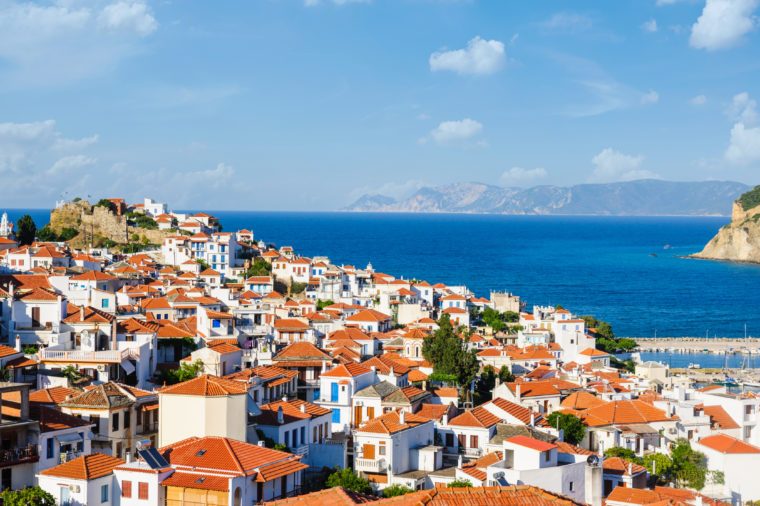 Put on your dancing shoes on Skopelos

You might not know the name of this Mediterranean hideaway, but if you’ve seen the popular ABBA-soundtracked Mamma Mia films, you’re definitely familiar with the gorgeous scenery of this movie star island. This is a port that can only be accessed by small ships, such as Star Clippers’ tall-masted sailboats on their special Mamma Mia cruise. The fabulous scenery includes the tiny chapel of Agios Ioannis Kastri, where Amanda Seyfried’s Sophie was to be married, which sits perched atop a rock cliff more than 300 feet above the Aegean Sea with 100 steps carved into rock leading to the church’s entrance. Skopelos offers especially stunning views on a Mediterranean cruise. 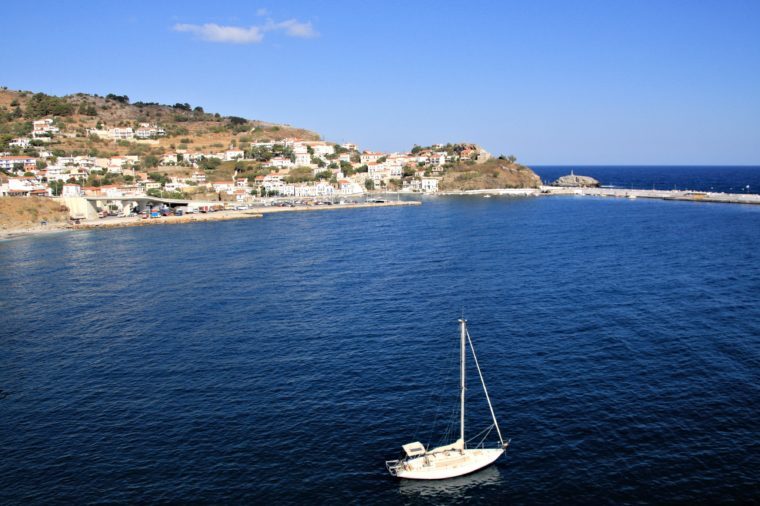 Learn the secret to a long life on Ikaria

In the storied “Blue Zone” of longevity, Ikaria is often referred to as “the island where people forget to die”. In fact, people in Ikaria live on average ten years longer than those in the rest of Europe and America. Come to discover the secrets to living longer—including a Mediterranean diet, visiting with friends and family, and walking everywhere—and stay for the museums, beaches, and thermal hot springs. Find out the secret ingredient you need for the Mediterranean diet. 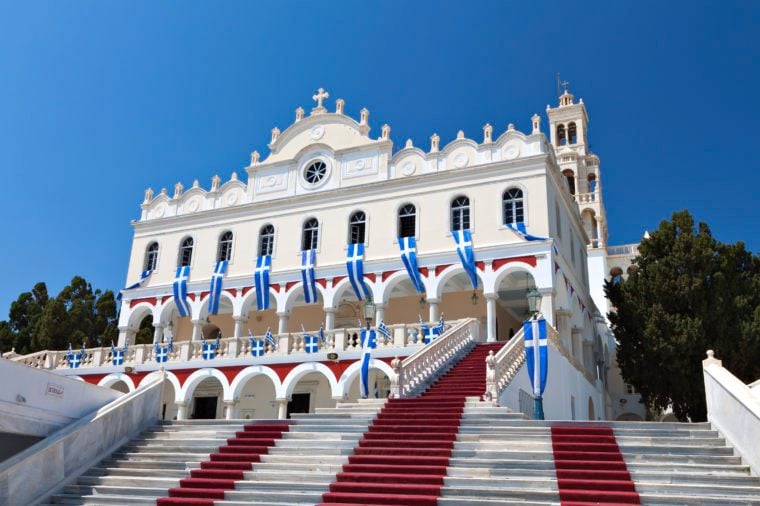 If beaches aren’t high on your priority list, head to this Greek island. Yes, they do have some beaches, but the main attractions on this island include various museums such as the Museum of Marble Crafts and Panayia Evanyelistria Cathedral and Museums. Once you knock this off your bucket list, add these European islands you never thought to visit, but should.