Get ready for some serious girl power, courtesy of these wise words from 20 inspiring women who changed the history books. 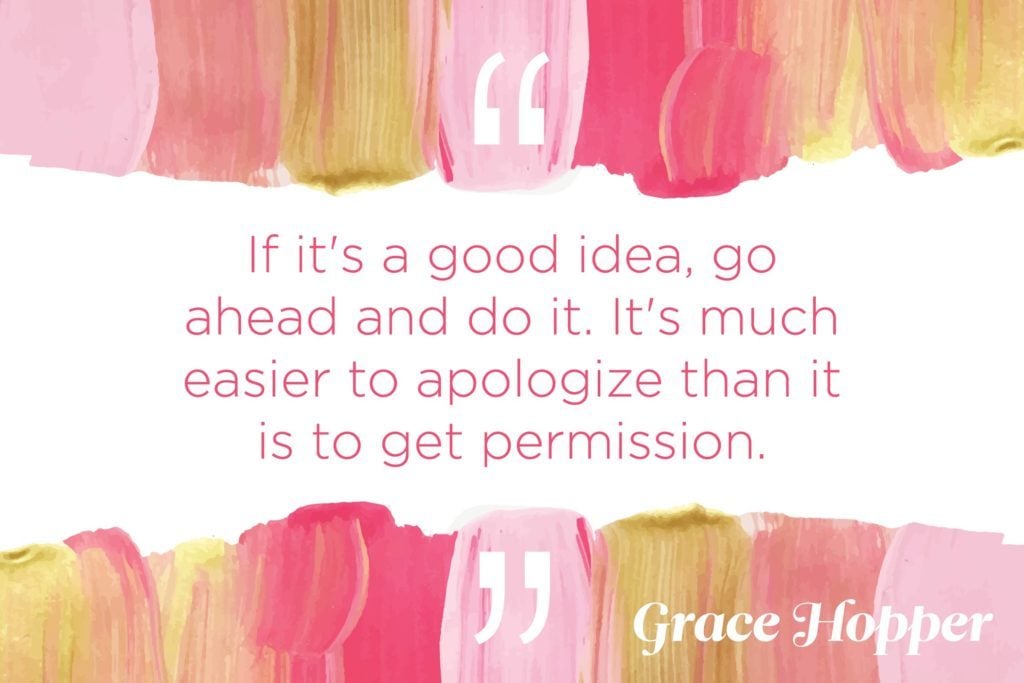 Grace Hopper led the team that created the first computer language compiler. She joined the Navy during World War II and programed the Mark I computer. She was the first female recipient of the National Medal of Technology in 1991, and died in 1992. Here are 5 women who haven’t let their age stop them from doing amazing things.

What she said: “If it’s a good idea, go ahead and do it. It’s much easier to apologize than it is to get permission.” 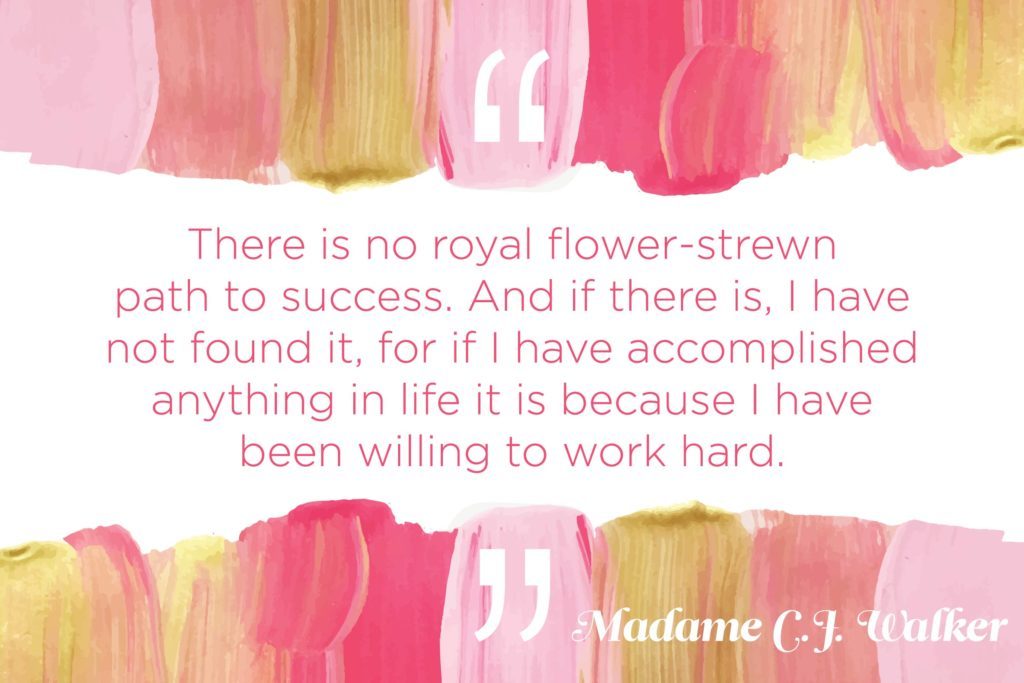 Madame C.J. Walker invented a line of African-American hair care products in 1905 and eventually became one of the first American women to become a self-made millionaire through skillful marketing of her much-needed products. She died on May 25, 1919. Learn about the young female inventors who are helping the homeless.

What she said: “There is no royal flower-strewn path to success. And if there is, I have not found it, for if I have accomplished anything in life it is because I have been willing to work hard.” History buffs will love these iconic newspaper covers from yesteryear. 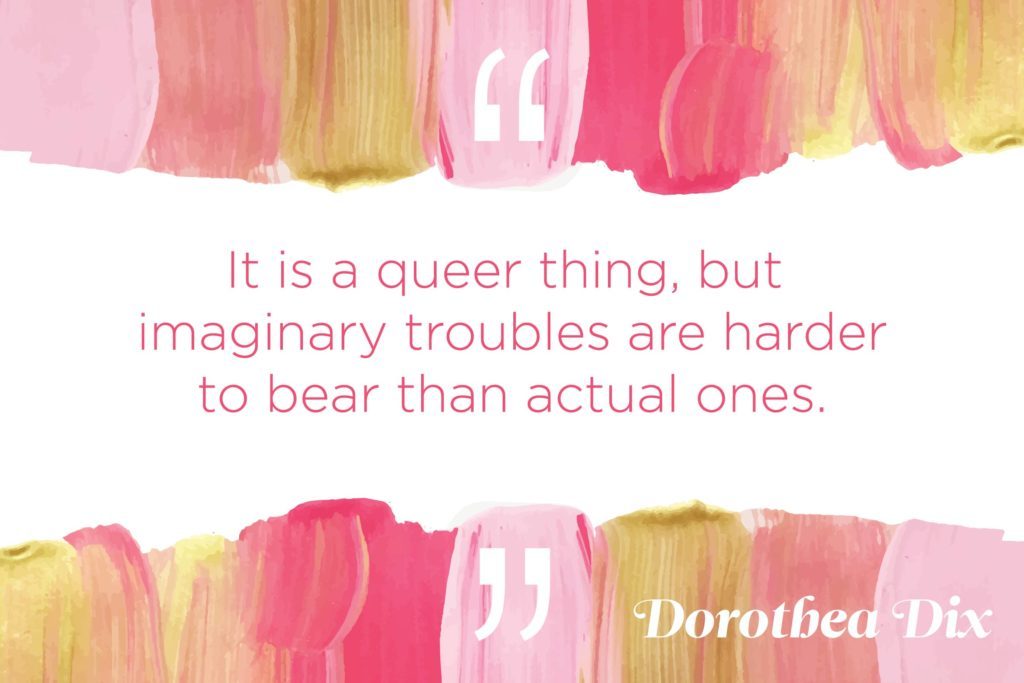 A social reformer devoted to the welfare of the mentally ill, Dorothea Dix lobbied United States and Canadian legislators to establish state hospitals for the mentally ill, which led to the construction of 32 institutions across the United States. She died on July 17, 1887. Looking for more life-changing quotes? These are 25 you won’t forget.

What she said: “It is a queer thing, but imaginary troubles are harder to bear than actual ones.” 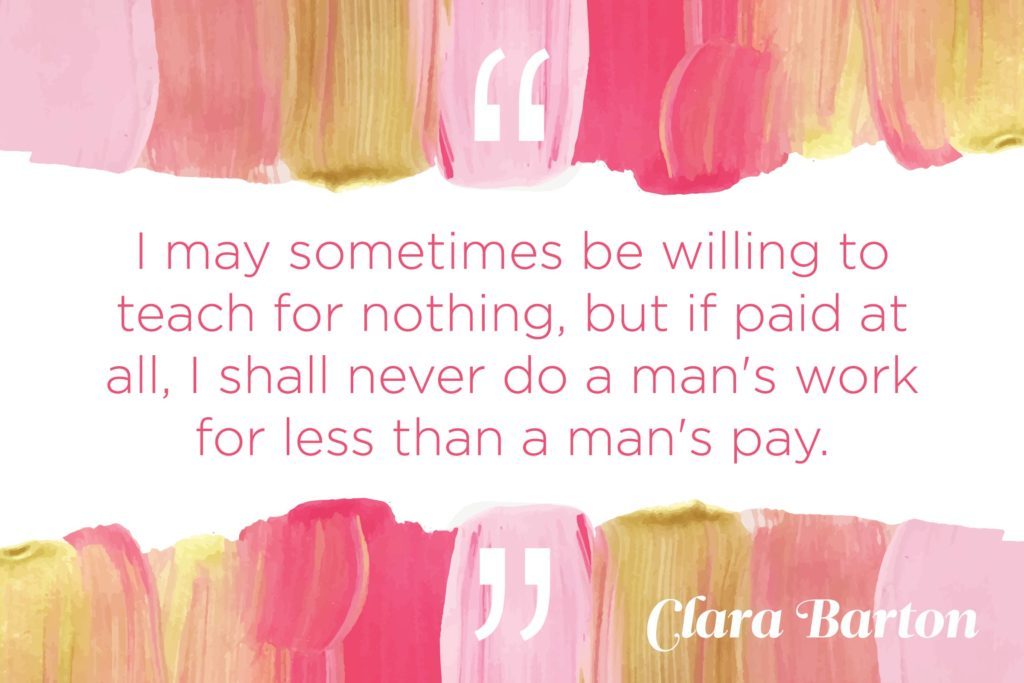 After she worked with the International Red Cross while visiting Europe, Clara Barton lobbied for an American branch when she returned home. She founded the American Red Cross in 1881, serving as the organization’s first president. Barton died on April 12, 1912. These incredible women are changing today’s world.

What she said: “I may sometimes be willing to teach for nothing, but if paid at all, I shall never do a man’s work for less than a man’s pay.” 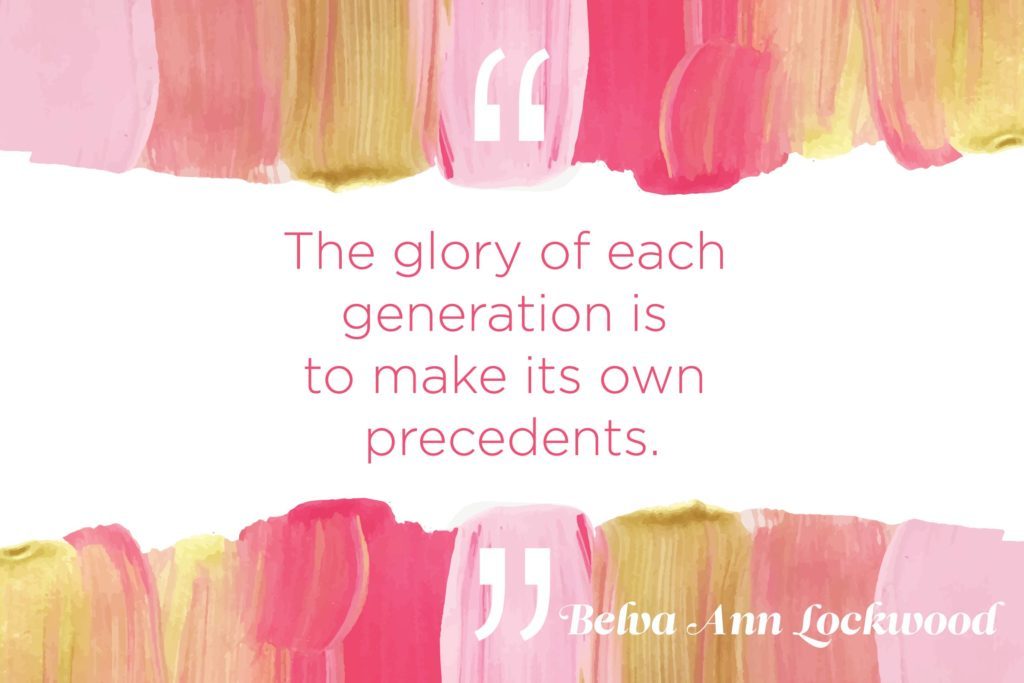 In addition to being the first woman to argue a case before the Supreme Court, Belva Lockwood ran for president—twice! (After all, the law only prohibited women from voting, not from getting votes). Lockwood also successfully lobbied for a bill to give female federal employees the same pay as men. She died in 1917 in Washington, D.C. Here are our favorite quotes from female Supreme Court justices.

What she said: “The glory of each generation is to make its own precedents.”

A leader in pushing women’s voting rights, Alice Paul eventually formed the National Woman’s Party and became a key figure in passing the 19th Amendment. She died on July 9, 1977. Here are the most inspiring movies about women’s history.

What she said: “I never doubted that equal rights was the right direction. Most reforms, most problems are complicated. But to me there is nothing complicated about ordinary equality.” 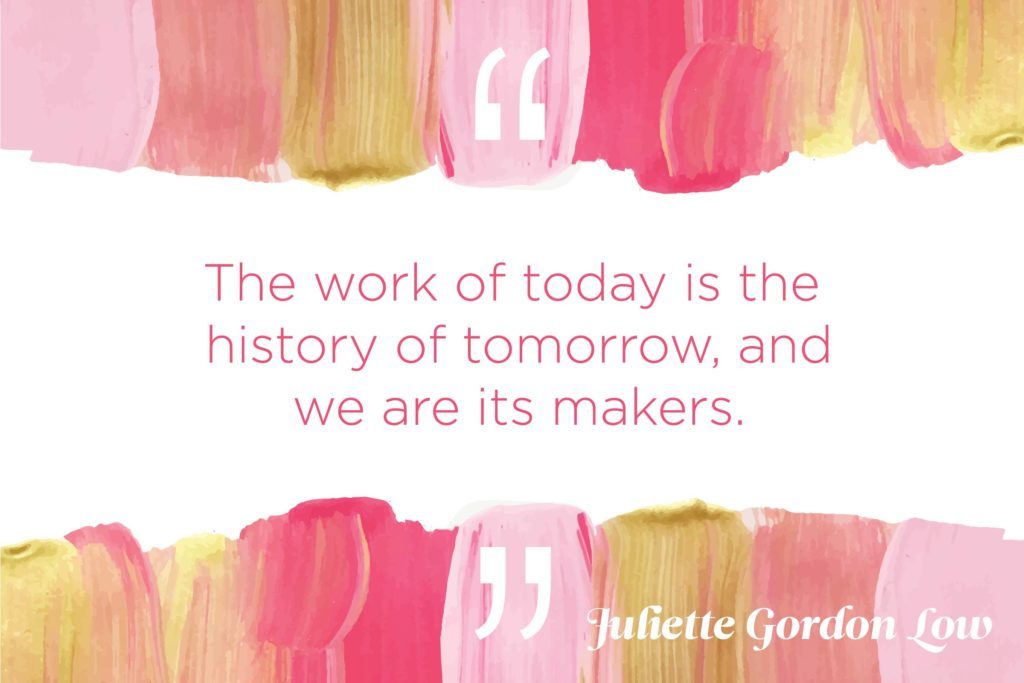 More than 59 million women have joined the Girl Scouts of America since Juliette Gordon Low founded the organization on March 12, 1912. She died on January 17, 1927. For proof that Girl Scouts are still changing the world, here’s this incredible story.

What she said: “The work of today is the history of tomorrow, and we are its makers.” 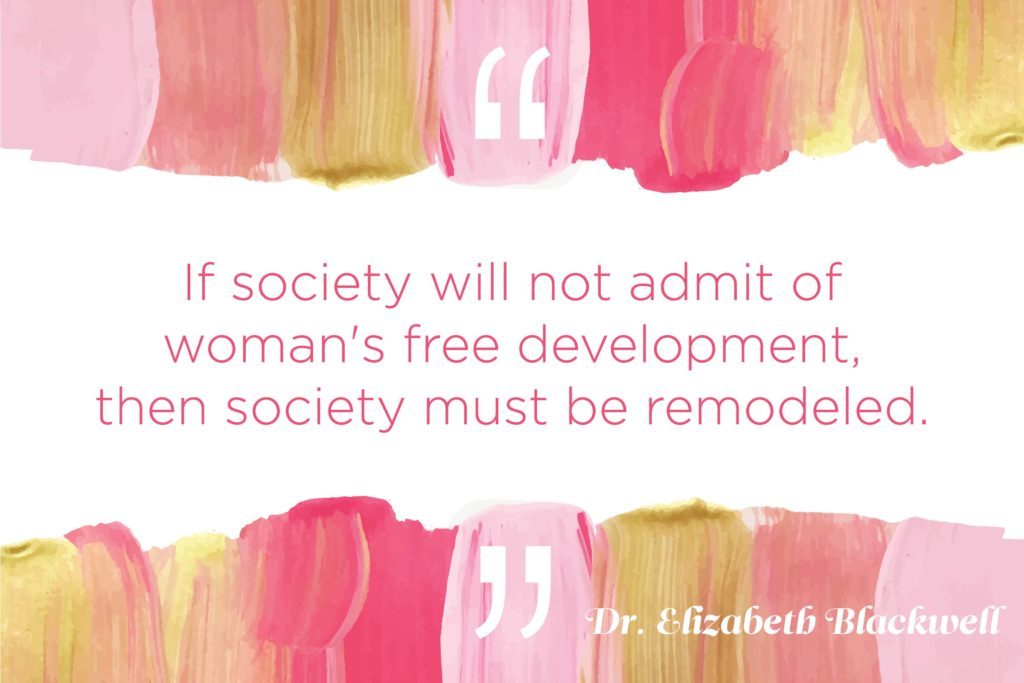 The first woman to graduate from medical school in the United States (the Geneva Medical College in New York), Dr. Blackwell later created a medical school specifically for women in the 1860s. She died on May 31, 1910. Here’s how one woman is fighting Internet trolls with stories of female scientists.

What she said: “If society will not admit of woman’s free development, then society must be remodeled.” 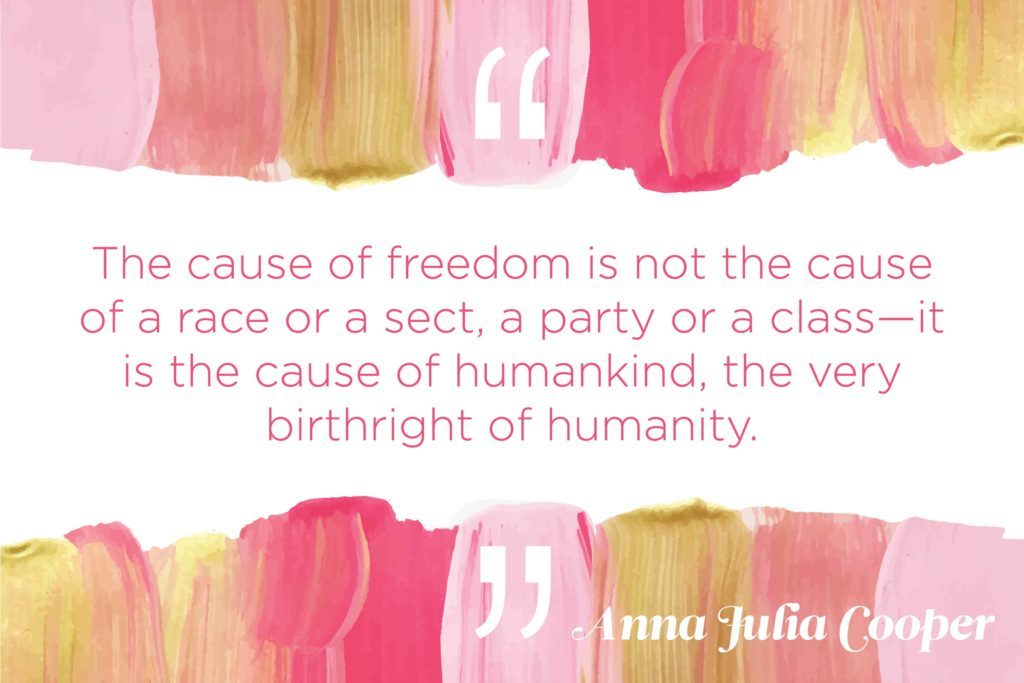 At 65 years old, Anna Cooper became the fourth African-American woman to earn a doctorate when she received her Ph.D. in history from the University of Paris-Sorbonne in 1924. She died on February 27, 1964.

What she said: “The cause of freedom is not the cause of a race or a sect, a party or a class—it is the cause of humankind, the very birthright of humanity.” 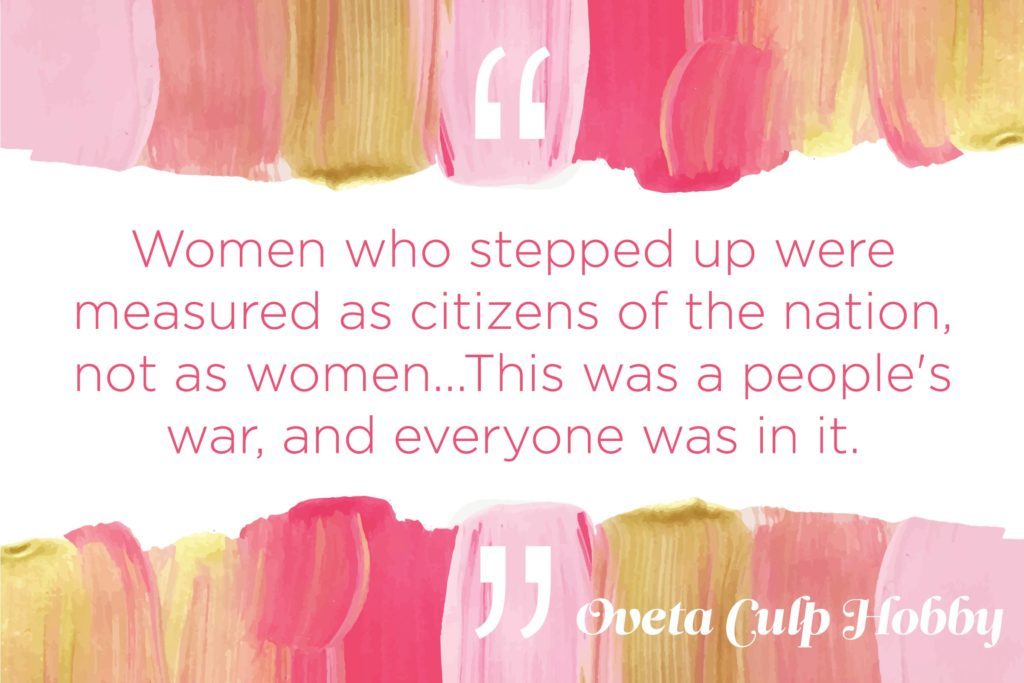 Oveta Culp Hobby became director of the Women’s Army Corps during World War II. She achieved the rank of colonel and was the first woman in the army to be a commanding officer. She was also the first woman to receive the Distinguished Service Medal. She died on August 16, 1995.

What she said: “Women who stepped up were measured as citizens of the nation, not as women…This was a people’s war, and everyone was in it.” 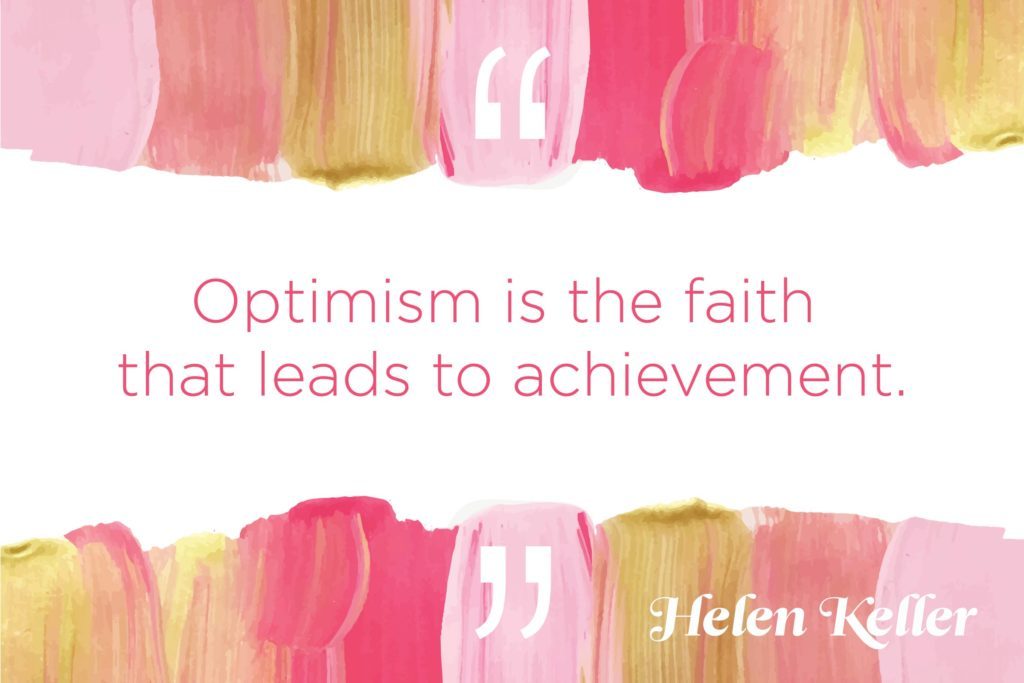 Helen Keller lost her sight and her hearing when she was only a year old. She became the first deaf and blind person (person, not just woman!) to receive a Bachelor of Arts. Keller gave lectures, wrote books, and fought for the rights of the disabled community. She died on June 1, 1968.

What she said: “Optimism is the faith that leads to achievement.” 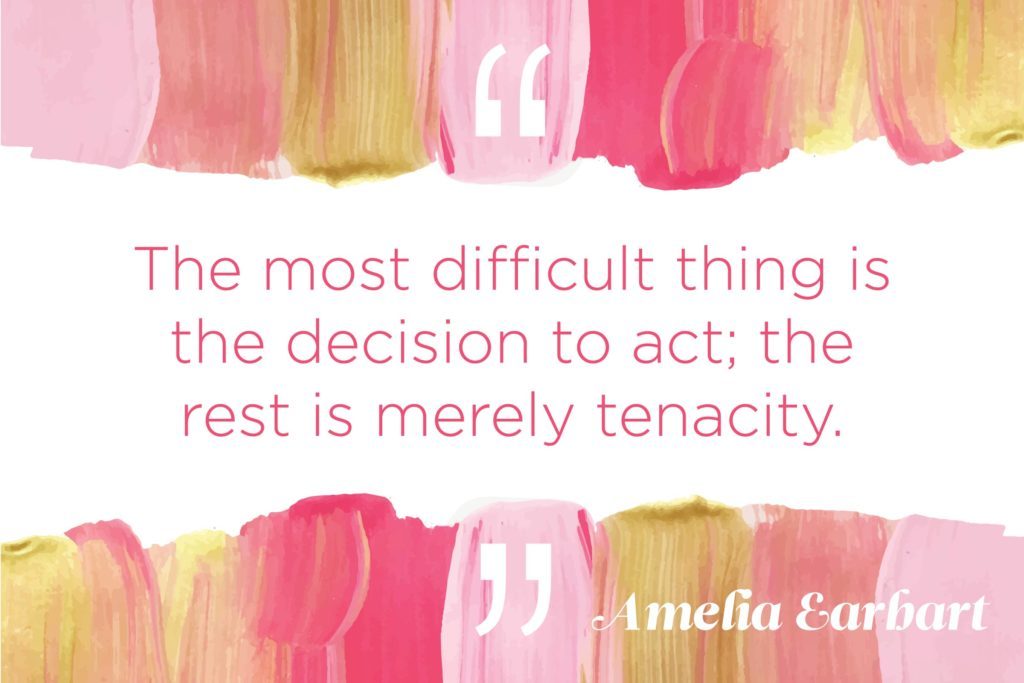 Amelia Earhart was an American pilot, the first woman to fly alone across the Atlantic Ocean. In 1932, she also became the first person to fly across the Atlantic twice. She disappeared in 1937, while attempting to fly around the entire world, and was declared dead in 1939. Here’s how one photo might help uncover clues about her disappearance.

What she said: “The most difficult thing is the decision to act; the rest is merely tenacity.” 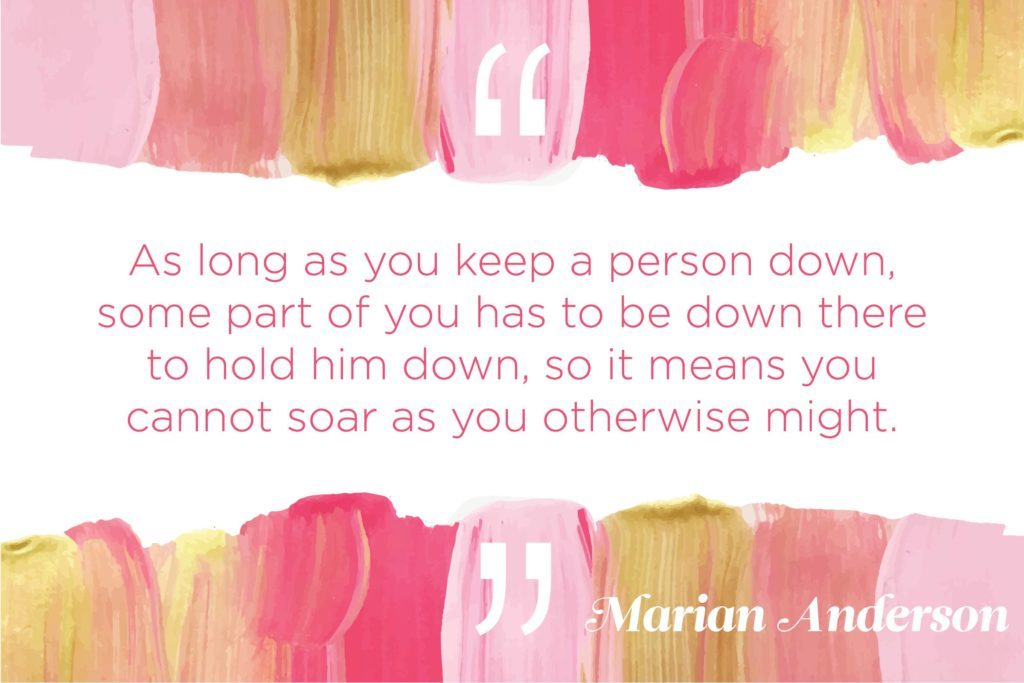 In 1939, singer Marian Anderson was forbidden to perform at Constitution Hall because she was African-American. 16 years later, she would become the first black person to perform on the stage of the Metropolitan Opera. She died on April 8, 1993.

What she said: “As long as you keep a person down, some part of you has to be down there to hold him down, so it means you cannot soar as you otherwise might.” 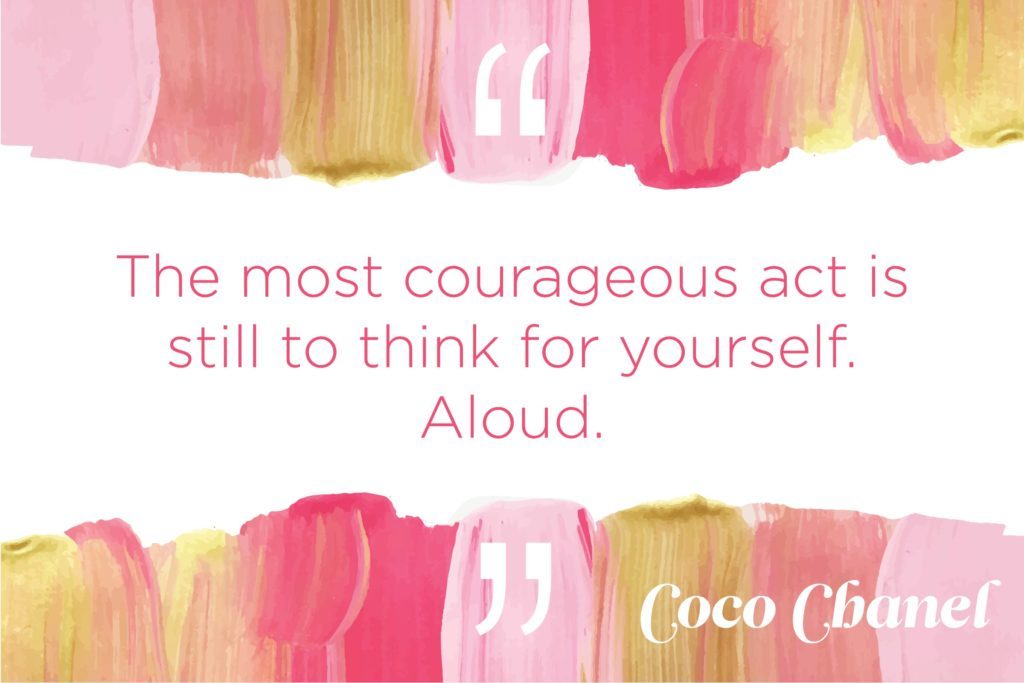 Coco Chanel is easily one of the most well-known names in the fashion world. She helped revolutionize fashion for women, making it mainstream to dress for comfort rather than only elegance. She is widely credited for the “little black dress” (which tops our list of dresses every woman should own). She died on January 10, 1971.

What she said: “The most courageous act is still to think for yourself. Aloud.” 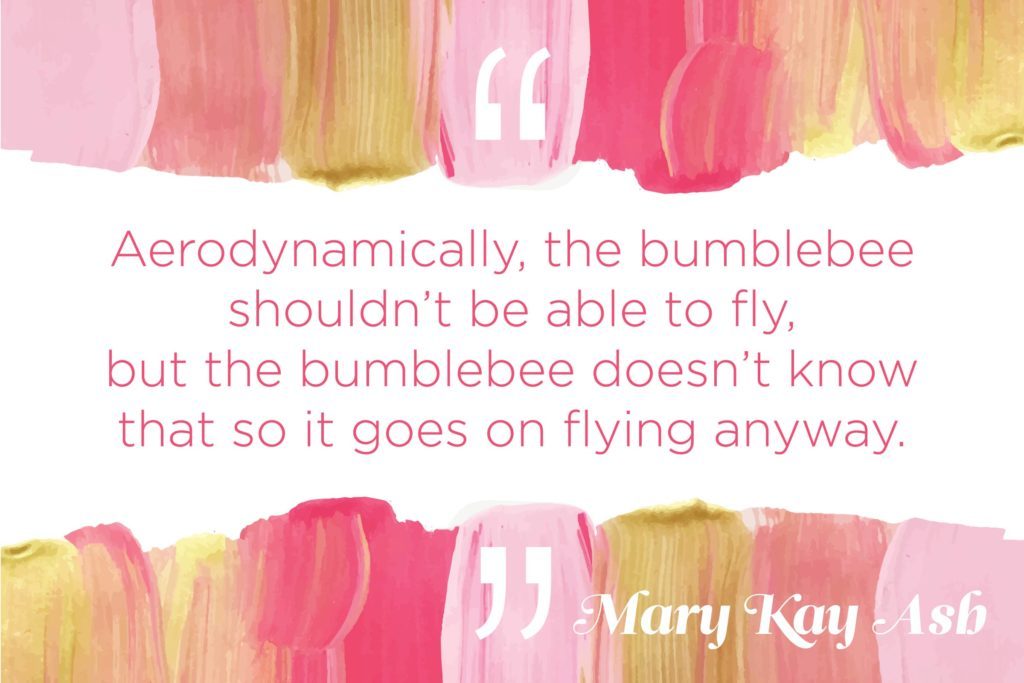 This entrepreneur decided to start her own business after years of watching less-qualified men get promoted over her. She founded the successful Mary Kay Cosmetics, starting with a mere $5,000. She passed away on November 22, 2001. Here are 10 ways to make some extra cash fast.

What she said: “Aerodynamically, the bumblebee shouldn’t be able to fly, but the bumblebee doesn’t know that so it goes on flying anyway.” 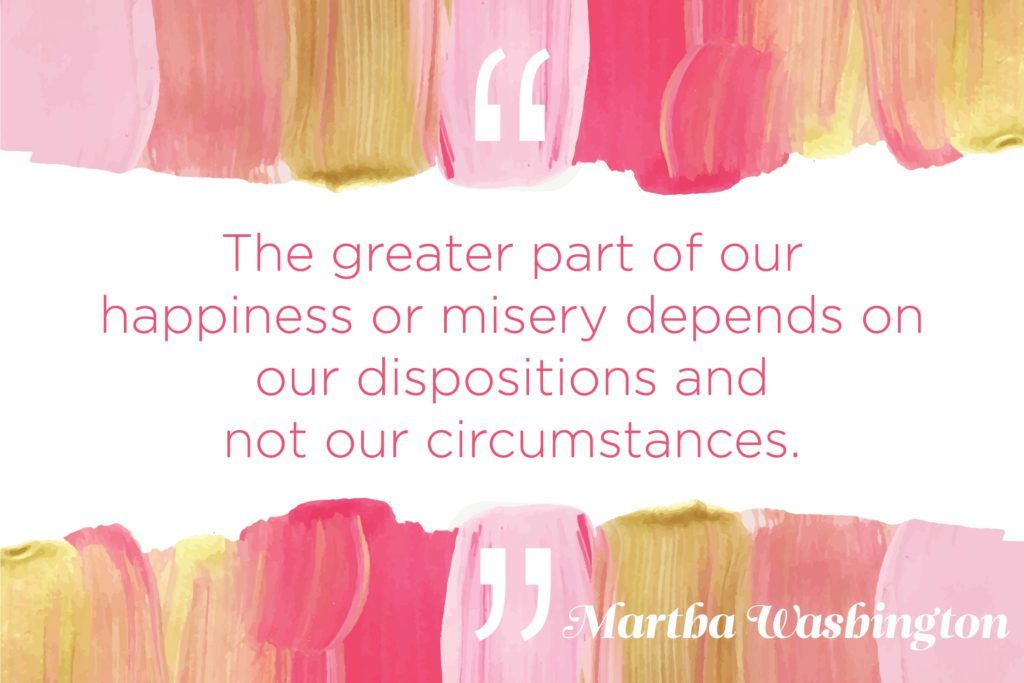 George Washington’s wife Martha was First Lady before it was cool; the term “First Lady” didn’t become popular until many years after her death. Unlike many other women in the early 18th century, Martha learned how to read and write. She died on May 22, 1802. We bet you never knew these cool facts about America’s first ladies.

What she said: “The greater part of our happiness or misery depends on our dispositions and not our circumstances.” 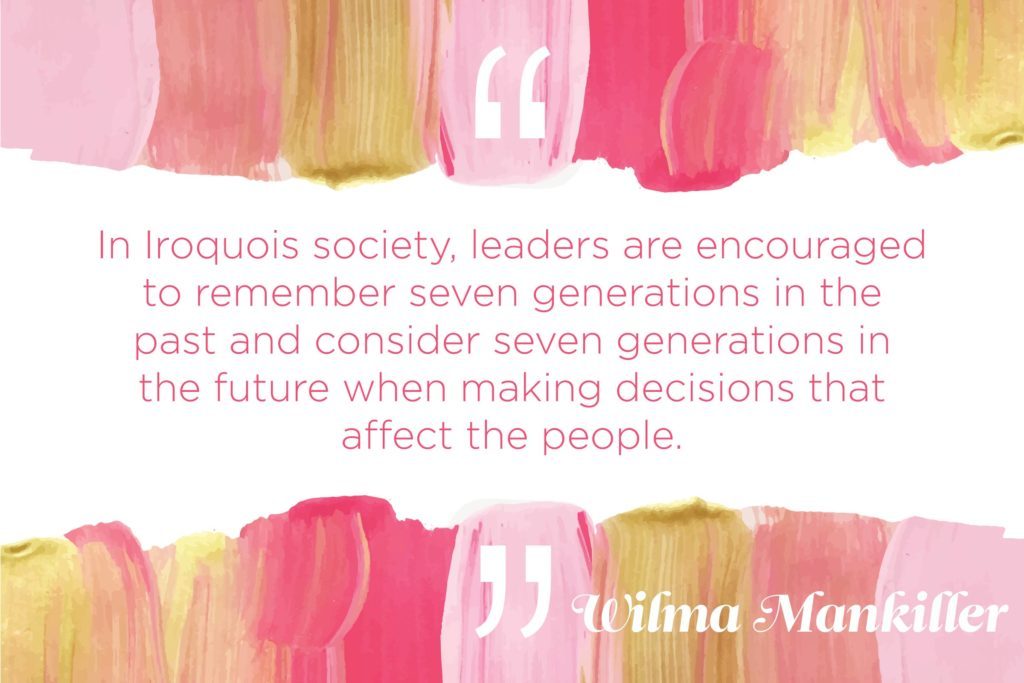 Wilma Mankiller became the first woman elected to be chief of the Cherokee nation in 1985. The great-granddaughter of a survivor of the Trail of Tears march, Mankiller was an advocate for the rights of Native Americans and of women in general. She died on April 6, 2010. 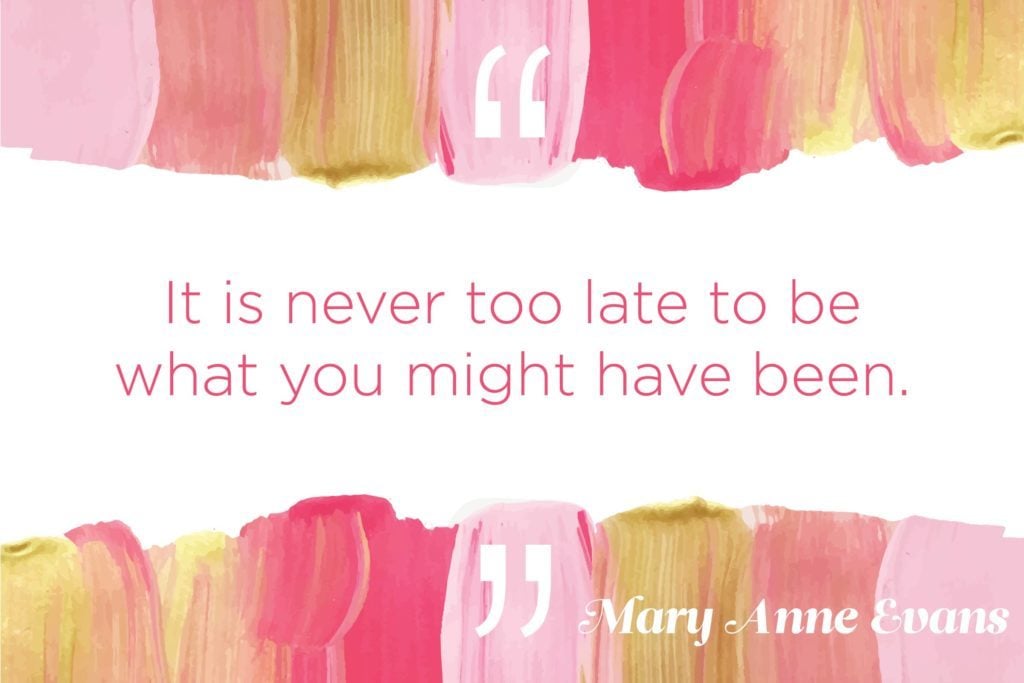 Born in 1819 in England, Mary Anne Evans is a famous Victorian novelist who wrote under the pen name George Eliot. She died on December 22, 1880. Her most famous work is Silas Marner, but we recommend the lesser-known Middlemarch. Here are some of our favorite quotes from books written by women.

What she said: “It is never too late to be what you might have been.” 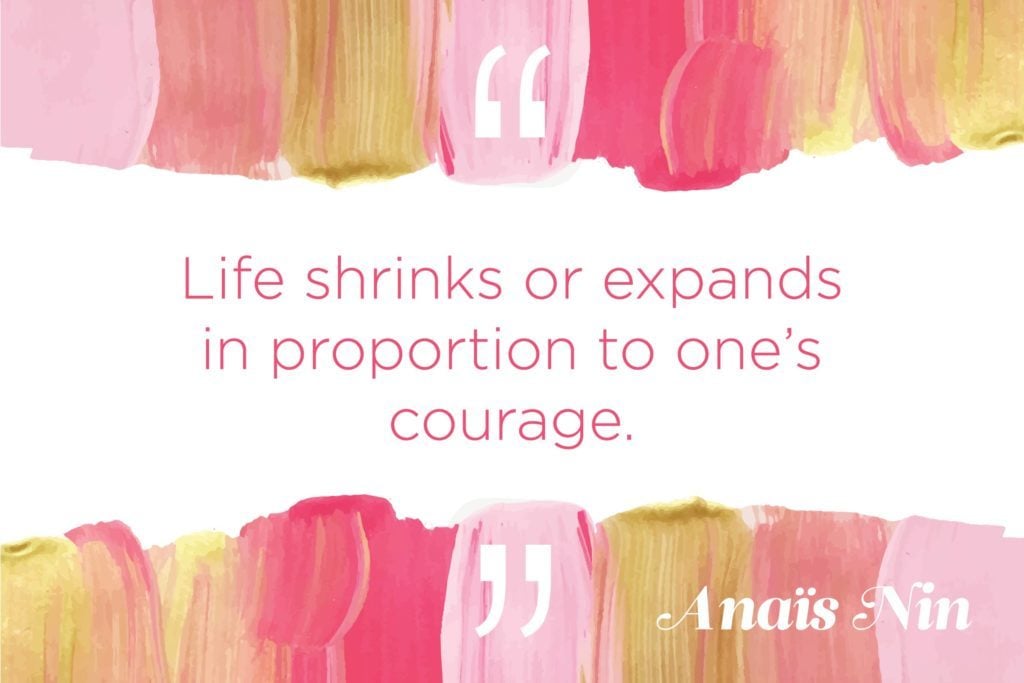 Anaïs Nin is another barrier-breaking female author, born almost a century after Evans/Eliot. Raised in France by parents of Cuban descent, she eventually moved to America. There, she would earn praise for her candid stories and diaries, winning the LA Times‘s Woman of the Year award in 1976. She died on January 14, 1977.

What she said: “Life shrinks or expands in proportion to one’s courage.” 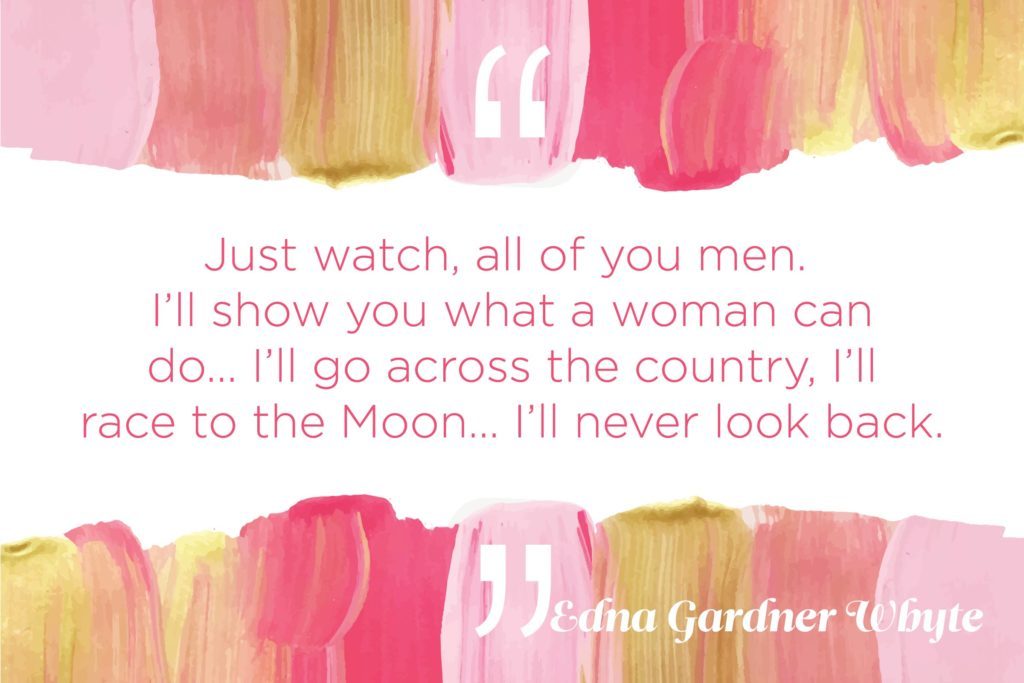 Like Amelia Earhart, Edna Gardner Whyte was a pioneer in aviation. She served as a pilot for over 60 years and helped train thousands of young pilots for World War II. She was also a successful air racer. She passed away on February 15, 1992. Learn about the woman pilot who pulled off a heroic water landing in 2013.

What she said: “Just watch, all of you men. I’ll show you what a woman can do…I’ll go across the country, I’ll race to the Moon… I’ll never look back.”