12 True Stories from the Most Haunted Forests in the World

With large, dark shadows and unidentifiable animal sounds, forests can be some of the spookiest places in the world. 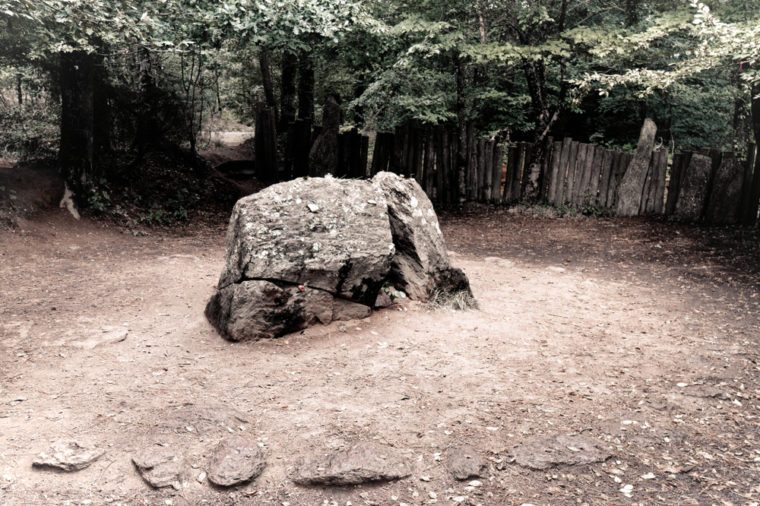 The Forest of Broceliande, France

The Fôret de Brocéliande, located in Brittany, France, is said to be the forest of the King Arthur legend and is rumored to be the home to the Tomb of Merlin (pictured). That wouldn’t make it spooky, in and of itself…except the Vals Sans Retour (Valley of No Return) is said to be where the sorceress Morgan le Fay (King Arthur’s half-sister) imprisoned young unfaithful men. In more recent times, the valley was the site of a terrible fire in 1990 that ravaged the forest, memorialized by a golden tree at the entrance to the valley (planted a year later). Forests aren’t the only scary part of nature—these 14 haunted bodies of water are sure to give you chills. 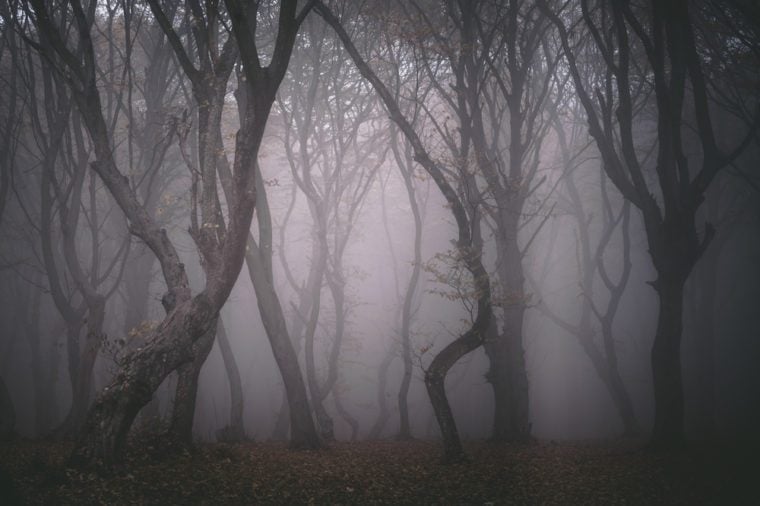 Located in northwestern Romania, the Hoia-Baciu is known as the “Bermuda Triangle” of Romania in that strange disappearances are said to have occurred here, like a shepherd who’s said to have disappeared with a flock of 200 sheep and a five-year-old girl who disappeared here only to emerge five years later without having aged. Visitors often “report intense feelings of anxiety and the feeling of being constantly watched,” the forest’s website warns, and the locals tend to stay away because they fear that if they enter, they will never find their way out. 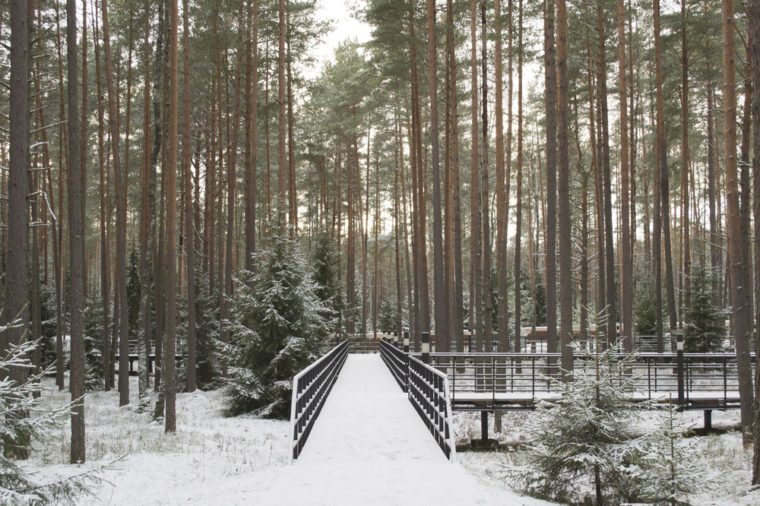 In 1943, at the height of World War II, German troops invaded the Smolensk Forest and discovered a mass grave containing thousands upon thousands of dead Polish soldiers (20,000, by some estimates). Ultimately, it was determined they’d been massacred on Joseph Stalin’s orders. If the presence of 20,000 lost souls wasn’t enough to frighten people away, then the tragic plane crash that took place there in 2010, which killed 96 Polish political, military, and business leaders, hammered the nail into the coffin, so to speak. Want to get really spooked? Don’t miss these 10 ghost stories from the world’s most haunted places. 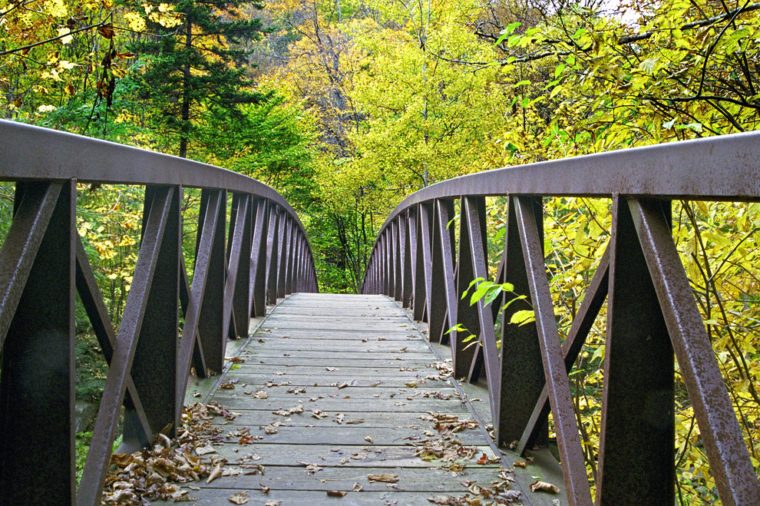 This 272-mile-long hiking trail is believed to be where Bennington College student Paula Jean Welden disappeared on December 1, 1946. But she wasn’t the only one. Four others disappeared there between 1945 and 1950, with only one body ever being found. And talk of the trail giving off a “weird haunting energy” continues to this day. Welden’s disappearance ranks as one of the 16 strangest mysteries of all time. 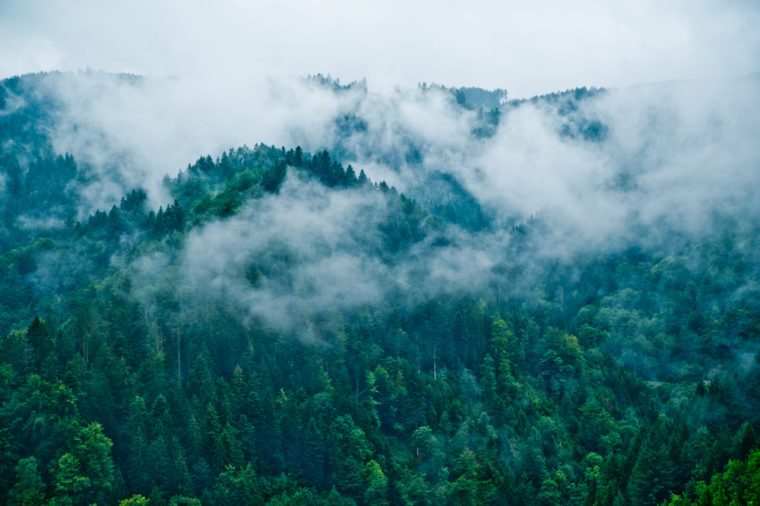 Named for its almost impenetrable darkness, the Schwarzwald (Black Forest”) is the site of some of the scariest fairy tales the Brothers Grimm ever wrote. But legend has it the forest is actually haunted by werewolves, witches, and the devil himself. The tale of der Grossmann, according to TripSavvy, is that of a tall, horribly disfigured man with bulging eyes and many arms who compelled children to enter the forest, confess their sins, and never emerge again. 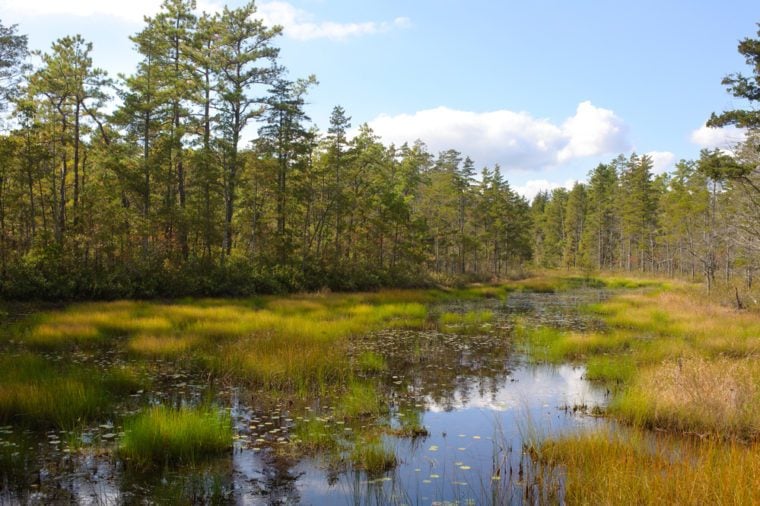 The forest floor of New Jersey’s extensive Pine Barrens are sandy, acidic, and nutrient-poor, and yet the Pine Barrens are filled with plant life—including pine trees that thrive on forest-fires in order to thrive. In the 18th century, the area came to be populated with outcasts of one kind or another, and over time, its residents seemed almost to cultivate a “hillbilly”-like backwardness that some believe is intended to keep outsiders outside. One legend that arose from that culture is that of the “Jersey Devil,” a monster with a goat’s head, bat’s wings, and cloven hooks. Go visit…if you dare. 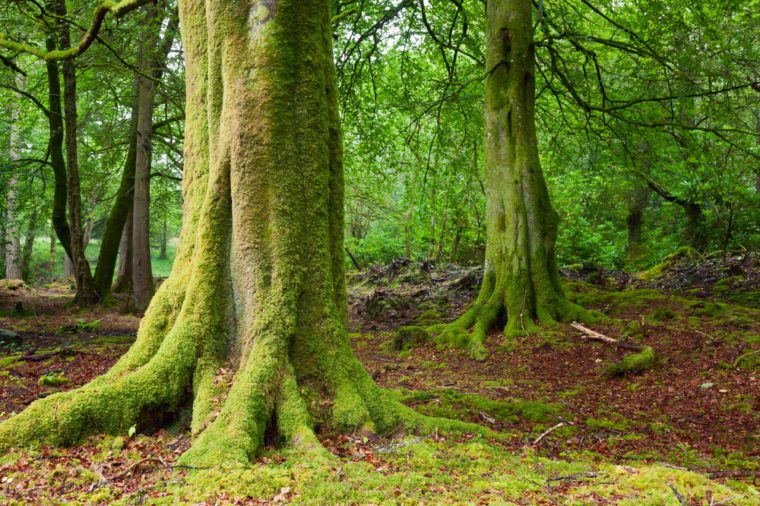 The woods of Loch Lomond and Trossachs National Park in Scotland include the Doon Hill, which is famous for its “Fairy Tree,” a lone Scotch pine nestled among a sea of oaks. “The tree is thought to mark the entrance to a Fairy Queen’s underground palace,” according to Scotsman.com, and it seems no one was supposed to know this. But in 1691, a local reverend let the secret out in his book, The Secret Commonwealth of Elves, Fauns and Fairies, angering the magical inhabitants, who cursed the reverend, whose spirit is said to remain there still. 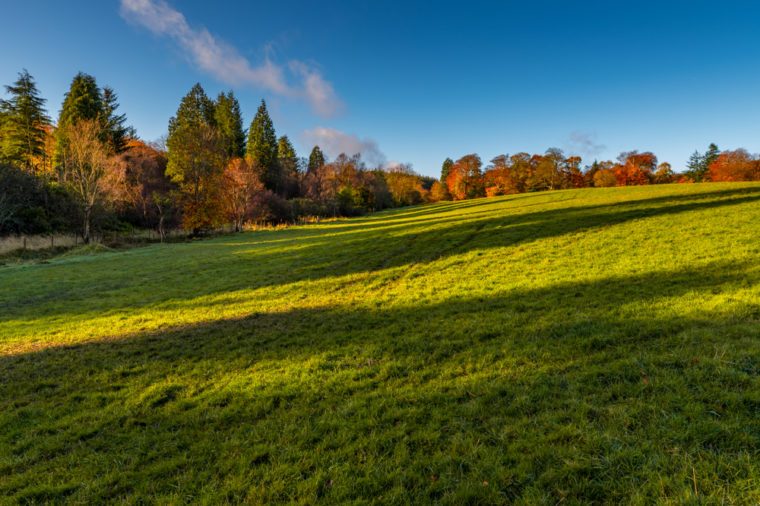 Another creepy copse in Scotland is the Blairadam Forest, which back in Victorian times had been the home of a coal mine and a mining town. Visitors to these woods report strange phenomena such as feeling inexplicably agitated or noticing their pets seem spooked. Living nearby did not stop the Wilson family from enjoying a hike and a picnic in 2008. But they were stopped cold after they left and examined the photos they’d taken of the Wilson children: a sinister-looking Victorian-clothing-clad figure was clearly visible, lurking among the trees. Speaking of…these 25 creepy photos will make the hair on the back of your neck stand up. 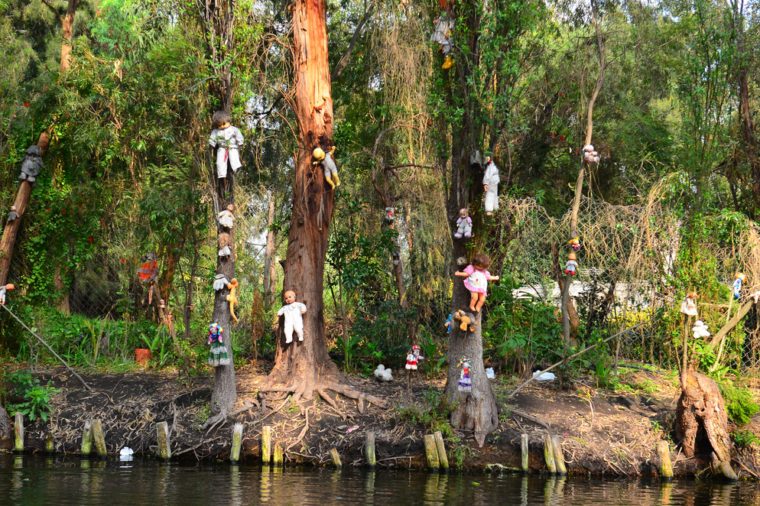 Island of the Dolls, Mexico

One of the world’s scariest places is La Isla de la Muñecas, or Island of the Dolls, a small island south of Mexico City, we’ve learned from Live Science. The island was named for its collection of dolls, doll heads, and disembodied doll parts that were strung along the jungle trees by a man who was haunted by the sight of a drowned girl whose body washed up on shore more than half a century ago. The sight of the dolls is terrifying enough, but some say that high above them in the treetops, they’ve heard the dolls whispering to one another. In fact, Island of the Dolls is one of the 15 spookiest destinations in the world. 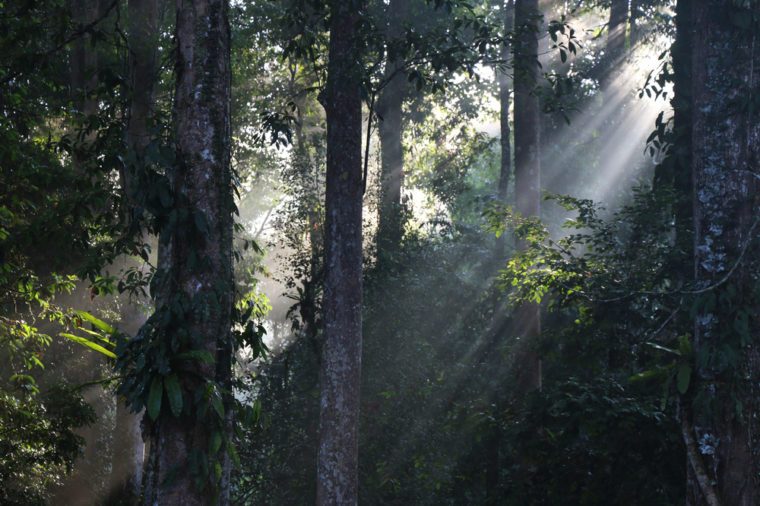 This forest park in Tawau, Sabah is home to the tallest tree in the world, a yellow meranti, and is frequented by tourists…but only during the day because local residents believe the forest is haunted, and the spirits that lurk there only come out in the nighttime. Go if you dare, but apparently, many people are believed to have disappeared there, particularly near its famous waterfall. 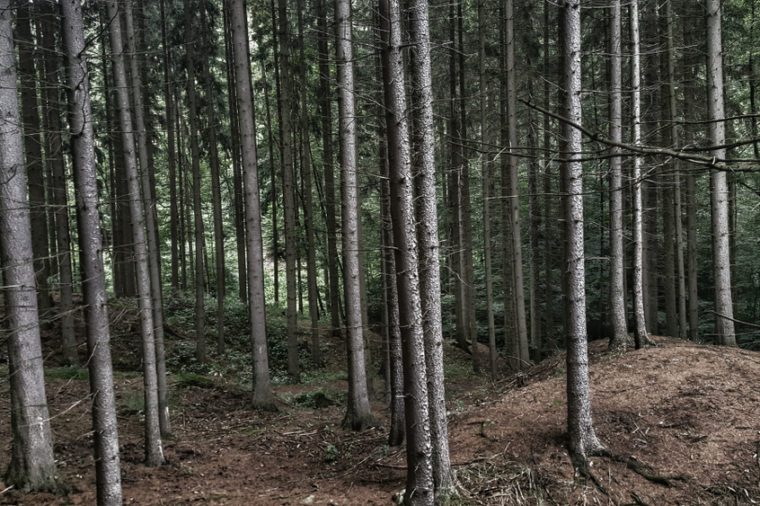 “Besides its scenic beauty, outdoor activities, and its interesting history, Freetown-Fall River State Forest is perhaps most well-known for its intense amount of bizarre, unexplainable phenomena, according to Mysterious Universe. That’s not surprising when you consider the forest sits within southeastern Massachusetts’s “Bridgewater Triangle,” a 200 square mile “epicenter” of the paranormal. Even if you’re not afraid of Bigfoot or the occasional UFO, the forest is still said to be haunted by the ghosts of a Native American tribe, embittered by the presence of European settlers. 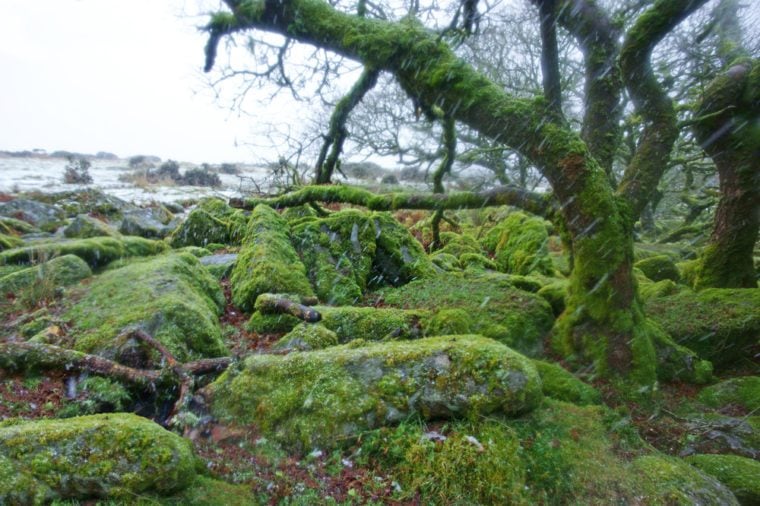 In Wistman’s Wood, moss and lichen drip so heavily from the tangled treetops, the sky is nearly obscured, according to Atlas Obscura. And the place is legit haunted, according to those who are familiar with its ancient tales of druids, hellhounds, ghosts, and a host of other supernatural creatures, earning it the title of “the most haunted place in England’s Dartmoor National Park.” Lovers of all things paranormal will want to read on for the spookiest ghost story in every state.