CBD vs. THC: What’s the Difference?

CBD and THC both stem from the cannabis plant, but that is where their similarities end and their differences begin. Learn more about the benefits and risks of CBD and THC.

CBD and THC are having a moment, and the drumbeat in favor of their benefits is only growing louder.

THC (delta-9-tetrahydrocannabinol), the main mind-altering chemical found in marijuana, also is becoming more accessible as many states have legalized marijuana for medical use, and some for recreational use as well.

To better understand the differences between THC and CBD, it’s important to get a handle on the similarities first.

THC and CBD are two of the main compounds called cannabinoids found in cannabis plants (stemming from their precursor, CBG, or cannabigerol). Both hemp and marijuana are cannabis plants. Marijuana contains much more THC than hemp, while hemp boasts more CBD. These plants also contain more than 500 other chemicals, including 100-plus other cannabinoids, according to the National Institute on Drug Abuse.

Both THC and CBD have identical chemical formulas (21 carbon atoms, 30 hydrogen atoms, and two oxygen atoms). It’s the way that the atoms are arranged that is responsible for the differing effects on your body.

One of the main differences between CBD and THC is how they behave in your brain, says Deepak Dsouza, MD, professor of psychiatry at the Yale University School of Medicine, New Haven, Connecticut. Your body produces cannabis-like compounds called endocannabinoids, and CBD and THC basically mimic or amplify the effects of your natural supply.

“THC locks into receptors on the brain called cannabinoid receptors (CB1 and CB2, in particular), which are part of the brain’s endocannabinoid system,” Dr. Dsouza explains. In contrast, CBD doesn’t interact as directly with CB1 and CB2, he says.”The exact mechanism of how CBD affects the brain is not clearly known yet,” he notes.

This is why CBD isn’t intoxicating in the way THC is, says Mallory J E Loflin, PhD, assistant professor of psychiatry at the University of California, San Diego.”You can’t get high even with an absurdly high dose of CBD, because it doesn’t interact with the receptor in the same way that THC does,” she says.

CBD can be found in pills, shampoos, foods, drinks, balms, and other forms to self-treat numerous conditions, including dental pain, anxiety, poor sleep—you name it, really—and the list will continue growing, Loflin says.

“There is really no good evidence to support CBD in any psychiatric disorder including post-traumatic stress disorder (PTSD) yet,” says Dr. Dsouza. “We need large, well-controlled studies to get to the point where we can say CBD works for these conditions, but we are not there yet.” As a result, the U.S. Food and Drug Administration (FDA) has sent warning letters to CBD companies that make claims about treating anxiety and other conditions.

There have been more studies to show that the THC in medicinal marijuana may help with pain, nausea, and lack of appetite associated with cancer therapy and some diseases. It is also being studied for its role in alleviating some symptoms of multiple sclerosis (MS), chronic pain, seizures, substance use disorders, and mental health conditions, according to the National Institute on Drug Abuse. The FDA has not officially recognized or approved the marijuana plant as medicine for any condition.

In some states, THC can be used for similar recreational purposes as alcohol.

“CBD has a halo effect around it. Everyone thinks it’s good for everything and casts it against THC,” Loflin says. But “people don’t realize that a lot of the activity we think of CBD having, like helping with anxiety, may be helped more with low doses of THC.”

There is some evidence that suggests low doses of THC are promising for treating anxiety and PTSD. “It’s the intoxicating doses that can start to get you into trouble,” explains Loflin.

There is no risk of addiction with CBD, Loflin says. “We don’t have evidence to suggest that if you use CBD too much or too often, you will become dependent on it, but the fact that people use it regularly is pretty new, so time will tell.”

THC, however, can be addicting. Nearly 30 percent of marijuana users experience marijuana use disorder. This disorder often travels with other substance use problems, behavioral issues, and disability, and is largely untreated, according to a study in a 2015 issue of JAMA Psychiatry. Twice as many men as women will be diagnosed with marijuana use disorder, and younger age groups are much more likely to experience the disorder than people older than 45.

THC in marijuana can stay in your body for up to 30 days, according to research, so it can cause you to fail a drug test. But there may be some THC in your CBD too. Hemp-derived CBD can contain trace amounts of THC—up to 0.3 percent to be exact.

This won’t get you high, but it could show up on a drug test, Loflin says. “Trace amounts that aren’t getting you high could be enough for you to fail,” she explains. “THC and CBD like to hang out in fat where they can build up over time like vitamins that are fat-soluble,” she says. Here’s more on what experts have to say about CBD and drug testing. 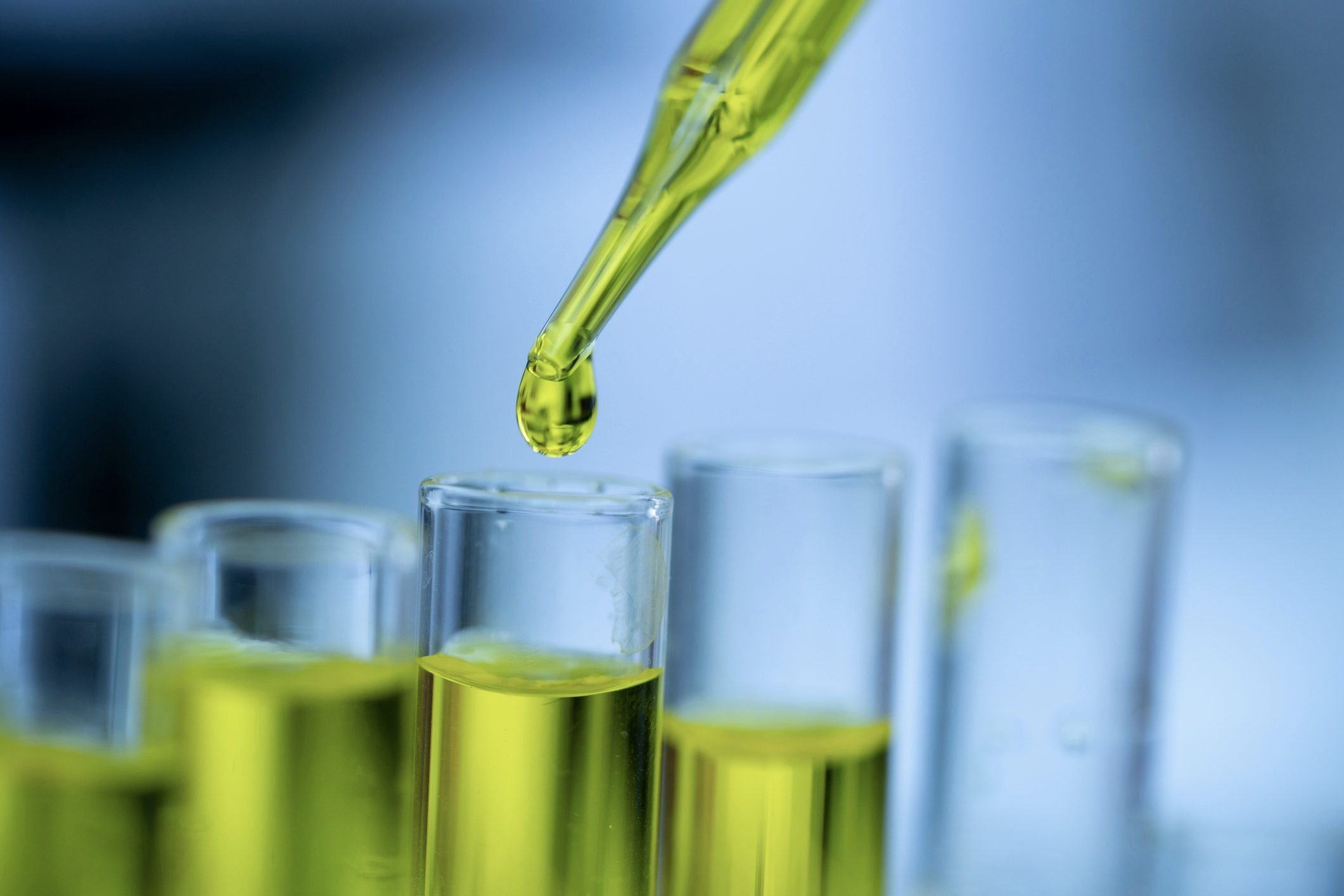 Risks and side effects

The FDA notes that CBD may cause liver injury and can interact with other medications you take, or even alcohol. There have been reports of fertility problems associated with CBD in animal studies. In general, CBD side effects may include fatigue, diarrhea, and changes in appetite/weight.

“CBD is relatively benign, and that’s one of the reasons you can buy it at Bed, Bath & Beyond,” says Dr. Dsouza. You also may not get what you pay for since CBD products aren’t well regulated yet—no agency is testing products to ensure they contain the active ingredient, or how much.

There are many risks associated with THC, says the National Institute on Drug Abuse, including addiction, dizziness, trouble walking, and memory issues. THC may also slow your reaction time and play a role in car accidents. Like alcohol, THC can reduce inhibitions, which can result in engaging in risky behaviors, including unprotected sex. “The munchies,” or intense hunger, which comes on after smoking marijuana, can lead to weight gain over time. Since people often smoke or vape the drug, THC can damage your lungs and possibly your cardiovascular system.

How much is too much?

The amount of CBD in your lotion or dark chocolate is extremely low—much lower than what would be needed for a therapeutic dose. “We have a lot of experience to tell us that 5 to 10 milligrams of oral THC are enough to produce the desired effect, but with CBD it would take hundreds or thousands of milligrams, so the cost alone of CBD would be a major barrier,” says Loflin.

And problems lead to problems, she says. “When you have to take hundreds of milligrams of something that is plant-derived to get to a therapeutic window, you can also get other contaminants in there,” she says. “When you pull CBD from cannabis, you may also get heavy metals and pesticides.”

With THC, the same issue exists but because you don’t need such highly concentrated products, it’s less of a pervasive problem, she adds.

There are marked differences in how the federal government regulates THC and CBD. The FDA is currently weighing the best ways to monitor CBD products. While THC is still covered under the Controlled Substances Act (CSA), CBD was removed thanks to the 2018 Farm Bill. Now it is up to the FDA to decide how to regulate the sale of CBD products.

Cannabis is still listed as a Schedule 1 controlled substance by the CSA, which is a barrier to conducting studies. “We would like to see more research and reasonable regulation,” says Scott Shannon, MD, assistant clinical professor of psychiatry at the University of Colorado-Children’s Hospital, Denver.

“Rescheduling cannabis to a Schedule 3 or even a Schedule 2 would open up research opportunities,” says Dr. Shannon. The American Heart Association agrees. The group recently published a statement in the Aug. 5, 2020 issue of Circulation recommending that the Drug Enforcement Agency remove cannabis from the Schedule I category so it can be more widely studied. Learn more about CBD in the forthcoming book The Essential Guide to CBD. Copyright © 2021 by Trusted Media Brands, Inc. and Project CBD. Next, here are 13 facts you need to know about CBD.

Signs You're Overpaying for CBD Oil

Everything You Need to Know About CBD Edibles

The Difference Between CBD Oil vs. Hemp Oil