How Much Caffeine Is in a Cup of Coffee?

Whether you drink Starbucks or brew coffee at home, we can help you get more bang for your buck.

Coffee lovers, we have some bad news: No two cups of Joe are completely the same. And while you’re out here spending big bucks on your daily morning brew—it’s just one of the problems all coffee lovers understand—don’t you want to maximize its rise-and-shine caffeine powers? As it turns out, the milligrams of caffeine per fluid ounce of coffee varies. How much caffeine is in a cup of coffee, anyway? Java is only one of the best sources of caffeine.

How much caffeine in a cup of coffee?

The amount of caffeine in a cup of coffee depends on a few factors including the grind size, water temperature, time, and brewing style, according to Megan Meyer, PhD, the Director of Science Communication at the International Food Information Council Foundation. So does the type of coffee beans and roasting technique, adds Malina Malkani, MS, RD, CDN, media spokesperson for the Academy of Nutrition and Dietetics. Lighter “blonde” roasts contain more caffeine than darker roasts—but darker roasts have a stronger flavor. Since there are so many things that impact the amount of caffeine coffee has, the numbers below are an average estimate, according to Meyer and Malkani.

Here’s how much caffeine is in a cup of coffee: 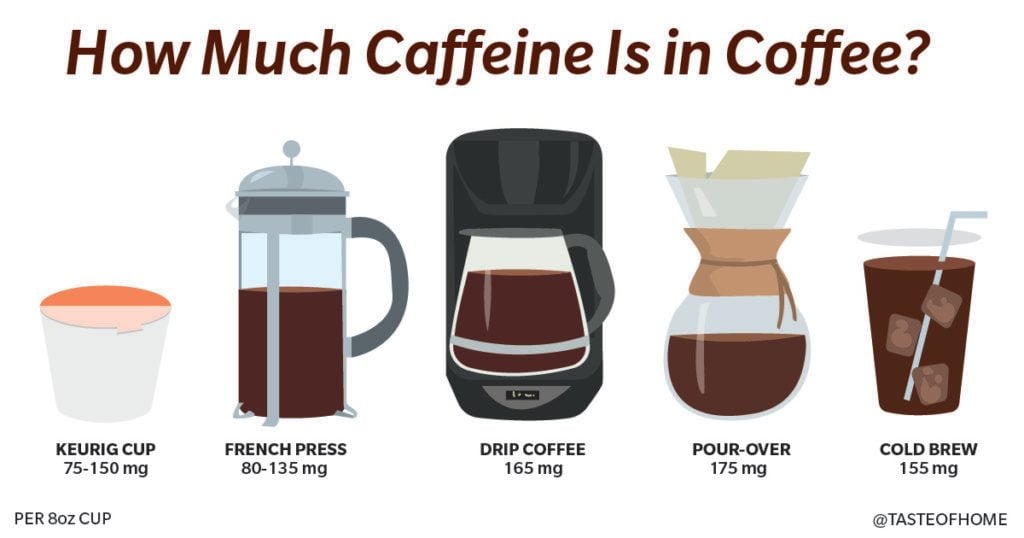 How much caffeine is in coffee from chains?

McDonald’s coffee might be a cheap on-the-go alternative, but how much caffeine is really in their coffee? The brand reportedly doesn’t standardize the amount of caffeine in their coffee. Estimates for caffeine in a brewed cup of coffee from the Golden Arches are 109mg in a small, 12-ounce cup; 145mg in a medium, 16-ounce cup; and 180mg in a large, 21 to 24-ounce cup. Coffee is an important part of the McDonald’s menu, which changed a lot over the years.

Of course, you can’t leave out Dunkin‘ in a coffee or caffeine comparison. The chain has 150mg of caffeine in a small, ten-ounce cup; 210mg in a medium, 16-ounce cup; 300mg in a large, 20-ounce cup; and 359mg in an extra-large, 24-ounce cup. But to get some serious energy and caffeine, go for a coffee from Deathwish. This self-proclaimed brewer of the world’s strongest coffee is no lie; just one cup contains a whopping 54.2mg per ounce of caffeine. But don’t worry, the website assures us, one cup won’t literally kill you. In fact, it turns out that you can drink way more coffee than originally thought—and actually live longer, too.

How much caffeine is safe per day?

It doesn’t matter if you prefer making coffee at home or buying it at Starbucks, Dunkin’, McDonald’s, or another chain coffee brand—having too much caffeine has some side effects. Although coffee is high in antioxidants that promote good health, too much caffeine could disturb sleep, increase anxiety, or cause heart palpitations, according to Malkani. Caffeine sensitivity varies, but moderate caffeine consumption is in the range of 300 to 400 milligrams per day, or about three to four eight-ounce cups of home-brewed coffee per day, according to Meyer. The FDA has cited that 400 milligrams a day is considered safe and is “not generally associated with dangerous, negative effects.” Caffeine does have an impact, however, and these 7 things happen to your body when drinking coffee every day.

The Truth Behind the Mysterious Burger King Crown Card