Confirmed: This Is How You Should Hang Your Toilet Paper

Over or under? We finally have the answer.

It’s an argument every persnickety homeowner has had: Should the end of the toilet paper hang over the top of the roll or be tucked underneath it? We may finally have an answer, courtesy of an 1891 patent by New York businessman Seth Wheeler. Here’s the real reason toilet paper is white.

Credited by some as America’s founding father of toilet paper, Wheeler patented the first perforated wipes in 1871 and launched his Albany Perforated Wrapping Paper Company in ’77, two years before the Scott brothers debuted their blockbuster brand. Wheeler filed dozens of patents until the 1920s, including those for toilet paper crimped into ornamenting patterns and disposable “bosom pads” meant to replace expensive corsets. But his greatest invention was the roll-and-handles design in 1891—a now-ubiquitous fixture whose patent illustration solved the “over/under” tissue issue before it even started. Take a look: 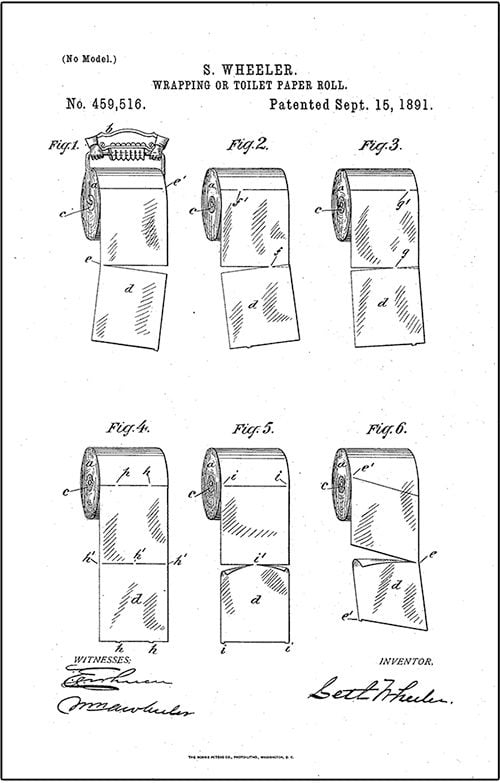 The answer, as you can see above, is “over”—no surprise to the estimated 70 percent of wipers who already prefer this position, according to cnet.com. Proponents say an “over” roll provides easier access to the free end of the toilet paper and minimizes the risk of knuckle-on-wall germ gathering. If this doesn’t include you, you may want to see if you’re also guilty of these bathroom mistakes you never knew you made.

The vehement 30 percent in the “under” camp counter that their position gives a tidier appearance and makes paper less prone to pet attacks—concerns that Victorian homeowners probably overlooked after switching from aloe-infused hemp sheets to Wheeler’s first perforated rolls. Next, you’ll be relieved to know the toilet plunger has finally been redesigned.

During the COVID-19 Crisis, This Man Helped People in Need Get Toilet Paper

"I Tried a Bidet and I'll Never Use Toilet Paper Again"

This Is What People Used Before Toilet Paper Existed

80 Moving On Quotes That Will Help You Let Go
25 Amazing Science Facts That Are Weird, Wild, and True
Indigenous Peoples’ Day and Columbus Day: 5 Things You Need to Know