Meet Amanda Gorman: The History-Making Poet the World Is Still Talking About

The youngest-ever inaugural poet exploded onto the national stage when she spoke at President Joe Biden's inauguration. Here are some things you should know about her and how she got there.

The inauguration of President Joe Biden was filled with incredible, history-making moments, not the least of which was the swearing-in of Vice President Kamala Harris, America’s first female, Black, and South Asian vice president. But the moment that really set the country abuzz was the stunning five-and-a-half-minute poem “The Hill We Climb,” read aloud by its author, 22-year-old Amanda Gorman. “Let the globe, if nothing else, say this is true, that even as we grieved, we grew. That even as we hurt, we hoped. That even as we tired, we tried,” she majestically declared. “That we’ll forever be tied together, victorious, not because we will never again know defeat, but because we will never again sow division.”

The Harvard graduate made history as the youngest-ever poet to recite at a presidential inauguration, but she’s been doing groundbreaking things her entire life. Here are some things you should know about Ms. Gorman.

She was born in Los Angeles

Gorman is a Los Angeles native; she was born in 1998 in the City of Angels, and she lives in an apartment in West L.A. now. As her poem mentioned, she was raised by a single mother, an English teacher named Joan Wicks. Here are the 34 most inspirational quotes about teaching.

In addition to an older brother, Spencer, Gorman has a twin sister Gabrielle. Gabrielle Gorman has also dedicated her life to making waves: She’s a filmmaker and activist. It sounds like they have a strong sisterly relationship: Amanda has joked that Gabrielle wants to “drag [her] to Disneyland once it’s safe.” We think they both deserve some fun!

She was the first in a new role

Before she became the youngest poet to deliver an inaugural address, she was named the first-ever National Youth Poet Laureate in 2017. Before that, she was chosen as the Youth Poet Laureate of Los Angeles in 2014—at 16 years old! (She was also the first to receive that honor!) According to the Los Angeles Times, she’s been in love with poetry since the third grade. For some poetic inspiration, check out 6 of her most amazing works.

She’s the first poet on the cover of Vogue

Gorman appears on the May 2021 issue of Vogue, making her the first poet to ever grace the cover. She shared a post on Instagram to pay tribute to the honor: “The first poet ever on the cover of @voguemagazine. I am eternally grateful & do not expect to be the last—for what is poetry if not beauty?” she wrote—proving her excellent observations and way with words as always! She also shared her joy at wearing a design by Virgil Abloh, the first Black artistic director at Louis Vuitton, for her cover shoot. Here are more incredible Black Americans you didn’t learn about in school.

She was specifically chosen by the First Lady herself

Dr. Jill Biden, the First Lady of the United States, was the one to select Gorman for the honor of performing at the inauguration. Dr. Biden had seen her recite poetry at the Library of Congress and advocated for her to the inaugural committee. It seems the admiration is mutual—Gorman’s delight when pointedly calling the new First Lady “Dr. Biden” was palpable!

She has a speech impediment

Gorman is a stunning example of persevering in the face of a challenge—in spite of a speech impediment, she’s become a phenomenal orator. After experiencing chronic ear infections as a baby, she developed an auditory processing disorder that caused a speech impediment. “My speech impediment…was dropping several letters that I just could not say for several years, most specifically the ‘r’ sound,” she specified. “I had to really work at it and practice to get to where I am today.” Her poetic reading at the inauguration was especially meaningful because the president himself, Joe Biden, has also struggled with a speech impediment. 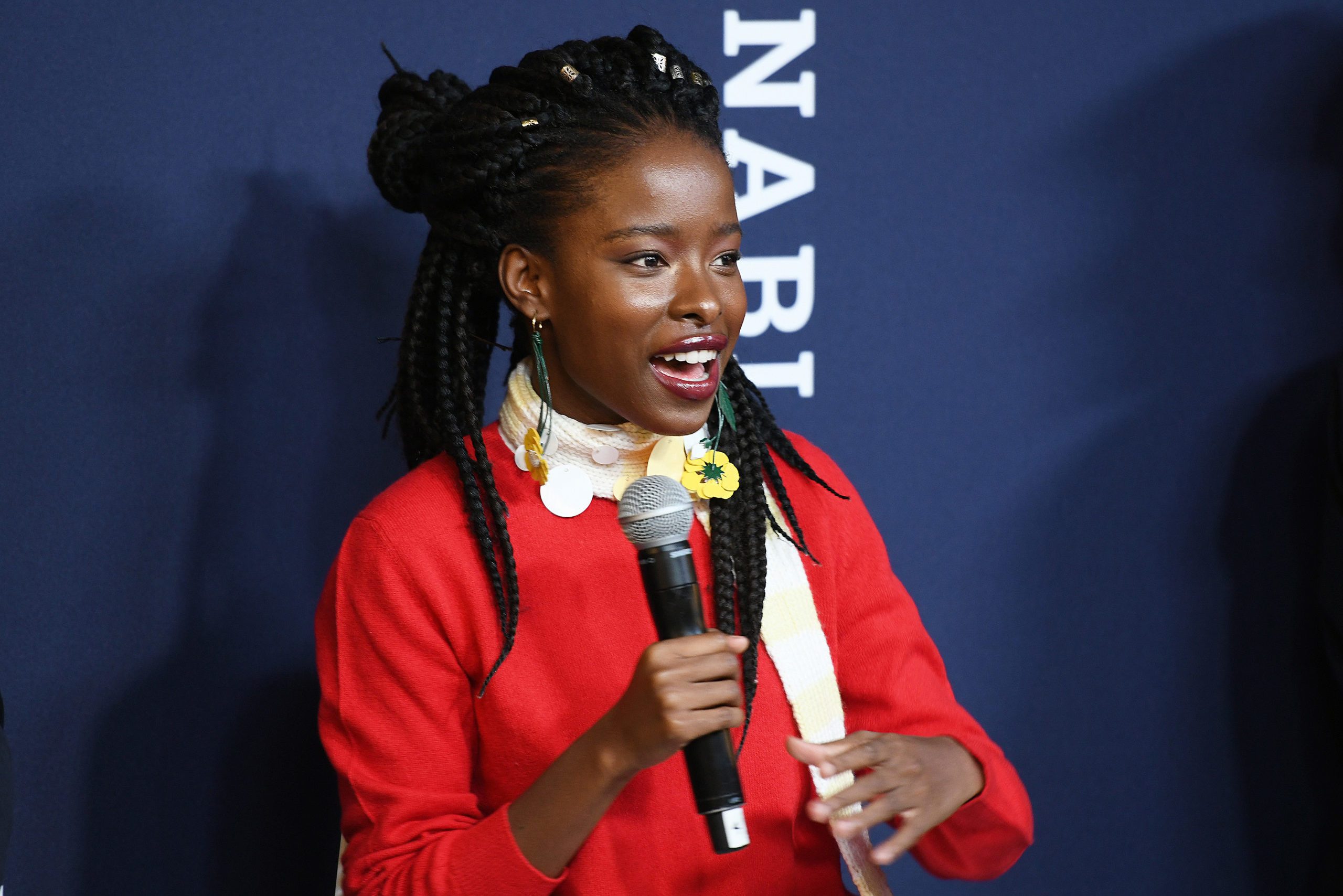 She listens to historically-inspired music while writing

Gorman has said that the soundtrack to her process while writing this moving piece of poetry included music from The Crown, Lincoln, and Hamilton. And “The Hill We Climb” definitely had Hamilton vibes with the inclusion of the line “history has its eyes on us.” Lin-Manuel Miranda himself surprised her with a congratulatory message during her January 21 “Good Morning America” appearance. Learn about more stories of incredible young women who are making history (or, rather, herstory).

As if writing a poem for a presidential inauguration wasn’t daunting enough, this inauguration fell only two weeks after insurrectionists stormed the U.S. Capitol to try to stop the certification of the 2020 election results. Gorman felt compelled to address this in her poem, and she finished the poem that night. “We’ve seen a force that would shatter our nation rather than share it, would destroy our country if it meant delaying democracy,” she recited at the podium. “And this effort very nearly succeeded. But while democracy can be periodically delayed, it can never be permanently defeated.” Take a look at more amazing poems by Gorman.

She paid tribute to her hero(ine)

Gorman has named Maya Angelou as one of her biggest inspirations—and she’s following in her footsteps by performing at a presidential inauguration. (Angelou performed “On the Pulse of the Morning” at Bill Clinton’s 1993 inauguration.) And to honor how Angelou helped pave her path, Gorman wore a ring with a caged bird as an homage to Angelou’s famous work I Know Why the Caged Bird Sings. And the cherry on top? The ring was a gift from Oprah, another of Gorman’s heroes, who also gifted a coat and gloves to Angelou before her inauguration performance. Here are 20 Maya Angelou quotes to uplift and inspire you.

She’s founded a nonprofit to support youth education and expression

In 2016, Gorman founded a nonprofit called One Pen One Page. Its mission is to empower youth to use their voices and help eliminate inequality through education. She was inspired to advocate for this cause by the work of her mother, teaching English at an inner-city school.

She performed at Super Bowl LV

Normally, we’re used to seeing just pop stars performing at the Super Bowl—but this year, Gorman recited an original work that highlighted three people the NFL honored as honorary captains. These three individuals—Trimaine Davis, an educator; Suzie Dorner, a nurse manager; and James Martin, a veteran—were recognized as leaders in their communities during the COVID-19 pandemic. If you didn’t catch her recitation during the live event, you can watch it here.

The accolades and titles continue! In 2013, after seeing Malala Yousafzai speak, Gorman became inspired to become a United Nations Youth Delegate. In 2017, she performed her poem “The Gathering Place” at the UN’s Social Good Summit. She’s also had the honor to perform in front of Malala herself and has written an opinion piece called “You Do YOU, Ms. Poet” for a Malala Fund digital newsletter. 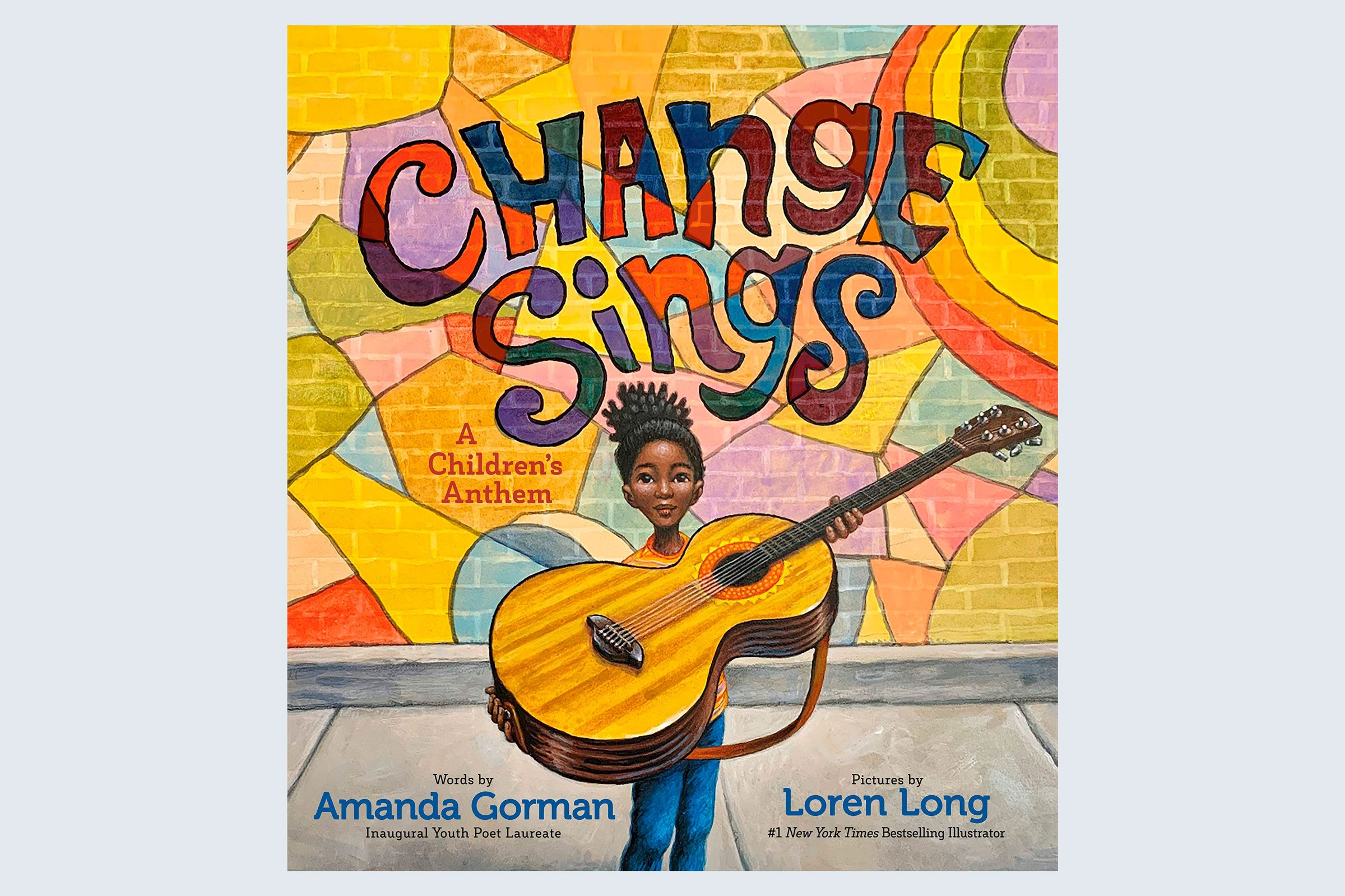 Amanda Gorman’s place in the world of written and spoken word will only get bigger. Her first children’s book, Change Sings: A Children’s Anthem, aims to empower children to be hopeful and make change. She wrote it before knowing who was going to be president in 2021: “Either kids are really gonna need a pick-me-up, or they’re really gonna need something that can help…summarize the change we just saw. It can go any way,” she remembers thinking while writing it. It will be released on September 21, 2021, and is available for pre-order. On the same day, her collection The Hill We Climb: Poems will also become available—and both books are already selling out.

She also already has a best-selling published book: the gift edition of the text of “The Hill We Climb.” The Hill We Climb: An Inaugural Poem for the Country went on sale on March 30, and her friend Oprah Winfrey (casual!) wrote a foreword. So far, it’s spent five weeks at the top of the Amazon charts!

Her line in “The Hill We Climb” that said “a skinny Black girl descended from slaves and raised by a single mother can dream of becoming president” was not just hypothetical. Back in 2017, Gorman announced her intention to run for president in 2036, the first year she’ll be eligible (she’ll be 37). On Good Morning America, she confirmed that that bid for the presidency is still in her sights. One thing’s for sure: The future of America is brighter with her in it! Next, check out 57 more incredible female firsts.

Why Are Inaugurations on January 20th?

The Best 14 Reads From the 2020 Quarantine Book Club