13 Everyday Abbreviations and Where They Came From

We use these abbreviations all the time without realizing what they mean (and that some of them actually don't even make sense). 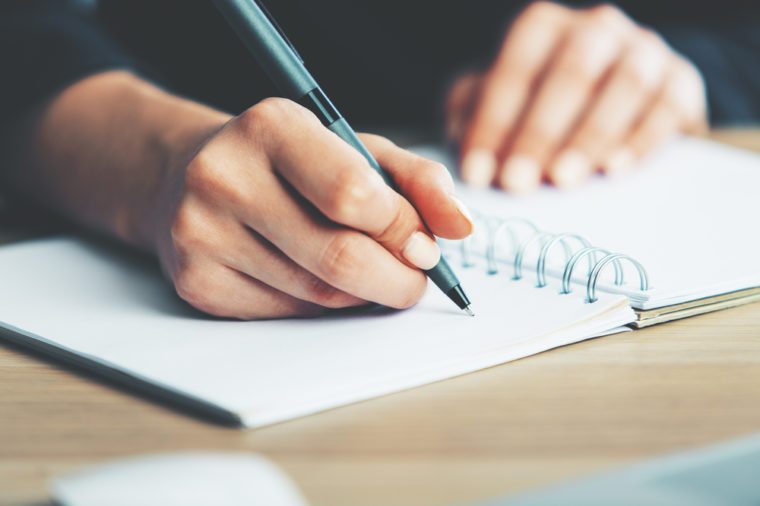 When it comes to confusing abbreviations, our No. 1 question is: Why is “No.” the abbreviation for “number,” since there’s no “O” in the word? Well, there may not be an “O” in “number,” but there is one in the Latin word numero, which is where the English word comes from. The “No.” abbreviation actually comes from a symbol meaning “number” (also derived from numero) that depicted a capital N with a miniature O, often as a superscript (Nº). Over time, the signal morphed into a regular N and O.

How did the letters “L” and “B” get to be the abbreviation for “pound,” a word that contains neither of those letters? It has to do with the origins of the word. The English word “pound” originates from Latin, specifically from an ancient Roman unit of measurement called a Libra pondo, meaning “a pound by weight.” “Pondo” became the English word “pound,” while the “Libra” provided the origin for the “lb” abbreviation. This is also the reason that the abbreviation for the British currency, pound, resembles an L. Check out these fascinating facts about every letter in the alphabet.

The abbreviation “oz” for “ounces” may make a bit more sense than “Lb” for “pound,” but it’s still a little perplexing. Where does the “Z” come from? Well, the word “ounces,” just like its big cousin “pounds,” originates from a Latin word. The Roman empire called an ounce uncia. As uncia evolved through the other Romance languages, it became unce in Anglo-French, leading to the English ounce. In Medieval Italian, the word was onza, which is where the “Z” in the abbreviation comes from.

Here’s another prime example of American abbreviations that are Latin in origin. Most people use “A.M.” and “P.M.” every day to refer to different times, without any idea what they stand for—and understandably so. A.M. stands for ante meridiem, or “before noon,” while P.M. stands for post meridiem, meaning (you guessed it) “after noon.” “Post,” meaning “after,” is a very familiar Latin loanword that we use all the time; we just may not realize that it’s the “P” in P.M., too.

When an ATM asks for your PIN, you know that this means the machine needs a four (or more)-digit number to identify your account. But do you know what “PIN” actually means? The three letters stand for “personal identification number.” We have a Scottish engineer named James Goodfellow to thank for this technological innovation; Goodfellow received a patent for an automatic cash machine, with a PIN pad, in 1966. So now you know that if you talk about your “PIN number,” you’re saying “personal identification number number.” The “PIN” abbreviation already has the word “number” embedded in it. (Bonus abbreviation: ATM stands for “automated teller machine.”) Here are some more phrases you’re using that are actually redundant.

We see this handy little pair of letters whenever we send an email and know that it’s a super-simple way to send a message to someone who isn’t the primary recipient. But how many of us know exactly what it means? Well, it’s short for “carbon copy” and references the technique of printing an identical copy of a typewritten document onto carbon paper, dating back to the late 19th century. According to Merriam-Webster, the use of “CC” as a verb, meaning to add a recipient to an email, began in 1983. “BCC” stands for “blind carbon copy”; if you BCC a message, it means that you can send it to someone else without the primary recipient seeing.

USB ports help us charge our phones, share computer screens, and access our files on any computer thanks to flash drives. We might take the USB technology for granted, including the fact that the abbreviation stands for “Universal Serial Bus.” If you’re wondering what buses could possibly have to do with computer gadgets, it’s not that kind of bus. In computer-speak, a bus is a set of conductors that creates a transmission path. The company Intel produced the first integrated circuits that could support USB technology in 1995.

This abbreviation, most often used to list a group of people without naming every single name, comes from the Latin phrase et alia. The phrase means “and others,” which explains why it’s used in scholarly articles to represent the other authors of a work besides the primary one. The Latin word alia is actually where our word for a false name, “alias,” comes from. This abbreviation is a little tricky punctuation-wise, because the “et” in et al. is not actually an abbreviation. Only the “al” needs a period after it. Here are some more punctuation mistakes even smart people make.

During your most recent job search, you may have come across this term, which basically means a slightly fancier, more in-depth resume. Sure enough, the letters “CV” come from Latin; they’re short for curriculum vitae. This phrase translates to “course of life.” Now that’s one way to think of a resume—it certainly makes it sound less commonplace! The use of this phrase with reference to job applicants first appeared in the early 1900s, according to Merriam-Webster.

If you’ve ever described someone’s mannerisms or habits by saying, “That’s just his MO!” without knowing what the M and the O stand for, you’re not alone. It comes from the Latin modus operandi, meaning “method of operating,” and was originally used to describe the behavior of criminals (and sometimes still is). Learn the origin of more common phrases we use all the time.

If you have a cell phone, it most likely uses a SIM card that allows you to connect to the network. But these cards also carry unique information about each cell user, which is why SIM stands for “Subscriber Identity Module.” Since the SIM card holds specific information about the user, it provides a way for the network to distinguish individual subscribers. The first SIM card appeared with the debut of GSM (Global System for Mobile communications) technology in 1991.

This is another confusing abbreviation with a stray letter that doesn’t seem to belong there. Where does that “R” come from? And…what exactly is “Mrs.” short for anyway? While today we pronounce it as “missus,” it originally stood for mistress. This word, dating all the way back to Middle English, was the female counterpart to “master” and simply referred to the primary woman in a household, or a female caretaker. As the connotations of the word “mistress” evolved into the late 18th century to be…less positive, “missus” became the primary word for the woman of a household instead, though the abbreviation with the R remained.

When you spill something and yell, “I need some paper towels, stat!”, you’re speaking Latin, and you may not even realize it! “Stat” is short for statim, the Latin word for “immediately.” Next, check out more common phrases and names you probably had no idea were acronyms.