First Ladies have often been trendsetters—some truly changed fashion history. But before they become fashion icons, they're officially introduced to the world on Inauguration Day. Take a look back at some of the best inaugural gowns from the past 60 years. 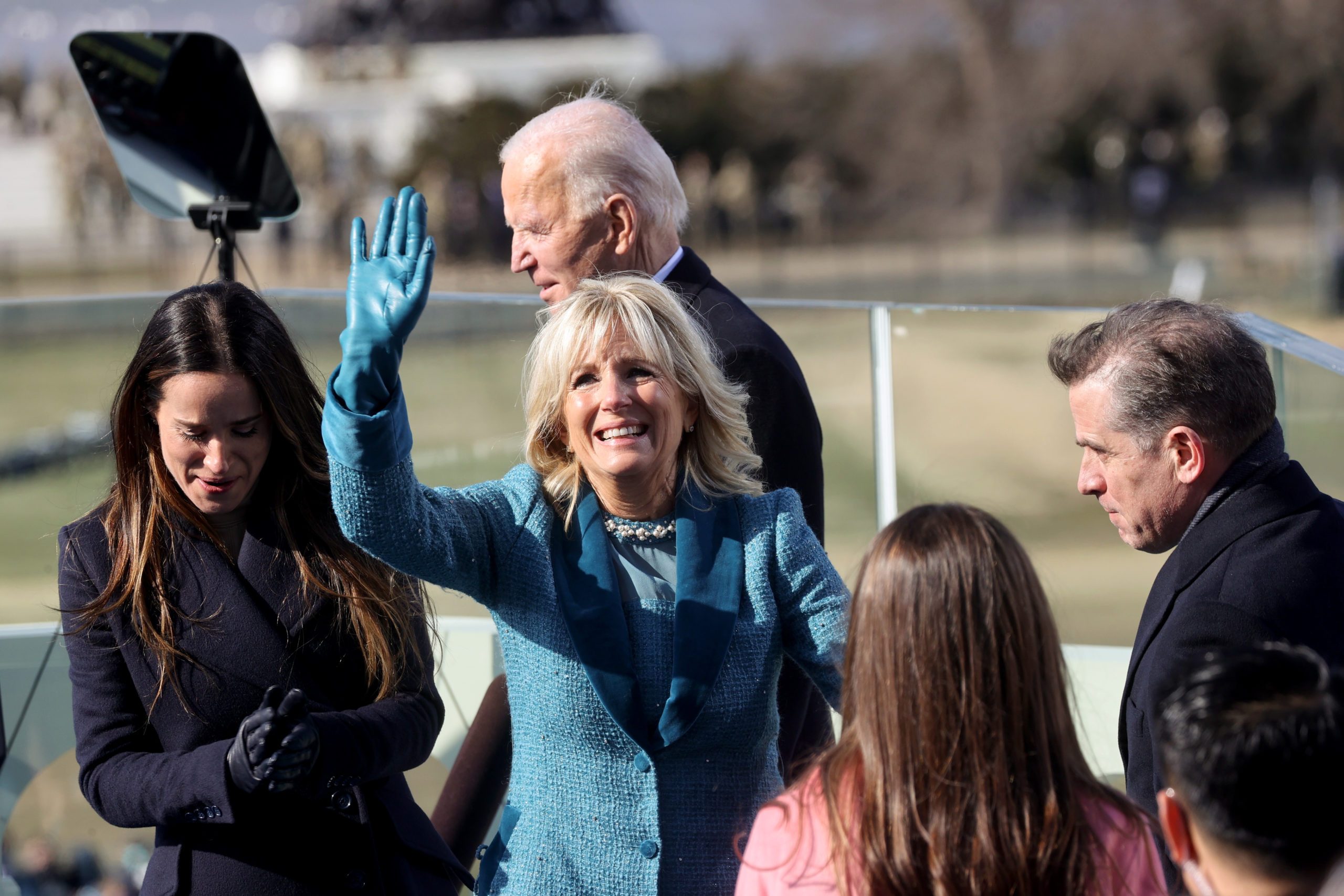 On Inauguration Day, it may be the new president actually being sworn in, but the First Lady gets to step out in her new role for the first time as well. And she usually dresses to impress for the occasion. Dr. Jill Biden is America’s new First Lady as of January 20, 2021—the first First Lady who plans to hold a full-time job while her husband is in office, as a teacher. Sadly, there were no inaugural balls following President Biden’s inauguration due to the ongoing pandemic. But as we wait to see what her stint as First Lady will hold, let’s take a look back at some of the most iconic First Lady inaugural looks, from Jackie O’s pillbox hats to Michelle Obama’s colorful, sleeveless styles. Plus, learn about these rules that every First Family is supposed to follow. 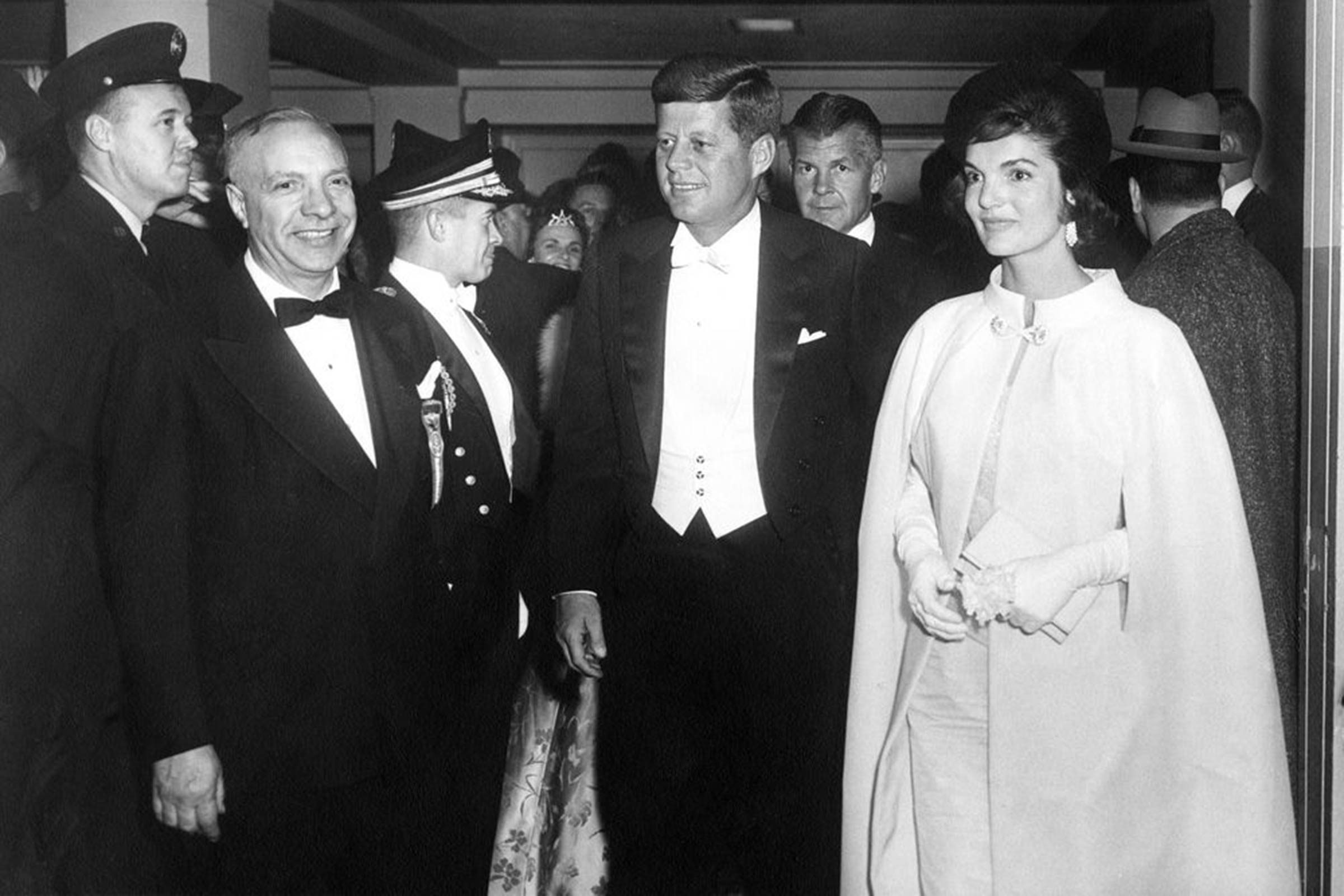 Jacqueline Kennedy in her own design (1961)

Jackie Kennedy is often thought as the epitome of First Lady glamour. For her husband John F. Kennedy’s inauguration, Jackie O wore a custom design she worked on in collaboration with Ethel Frankau, the head of the custom salon at Bergdorf Goodman. The white gown with embellished bodice and sheer overlay along with matching cape gave the new First Lady an ethereal quality. Mrs. Kennedy finished off her inaugural look with elbow-length white gloves. Here’s how to steal more style secrets from Jacqueline Kennedy. 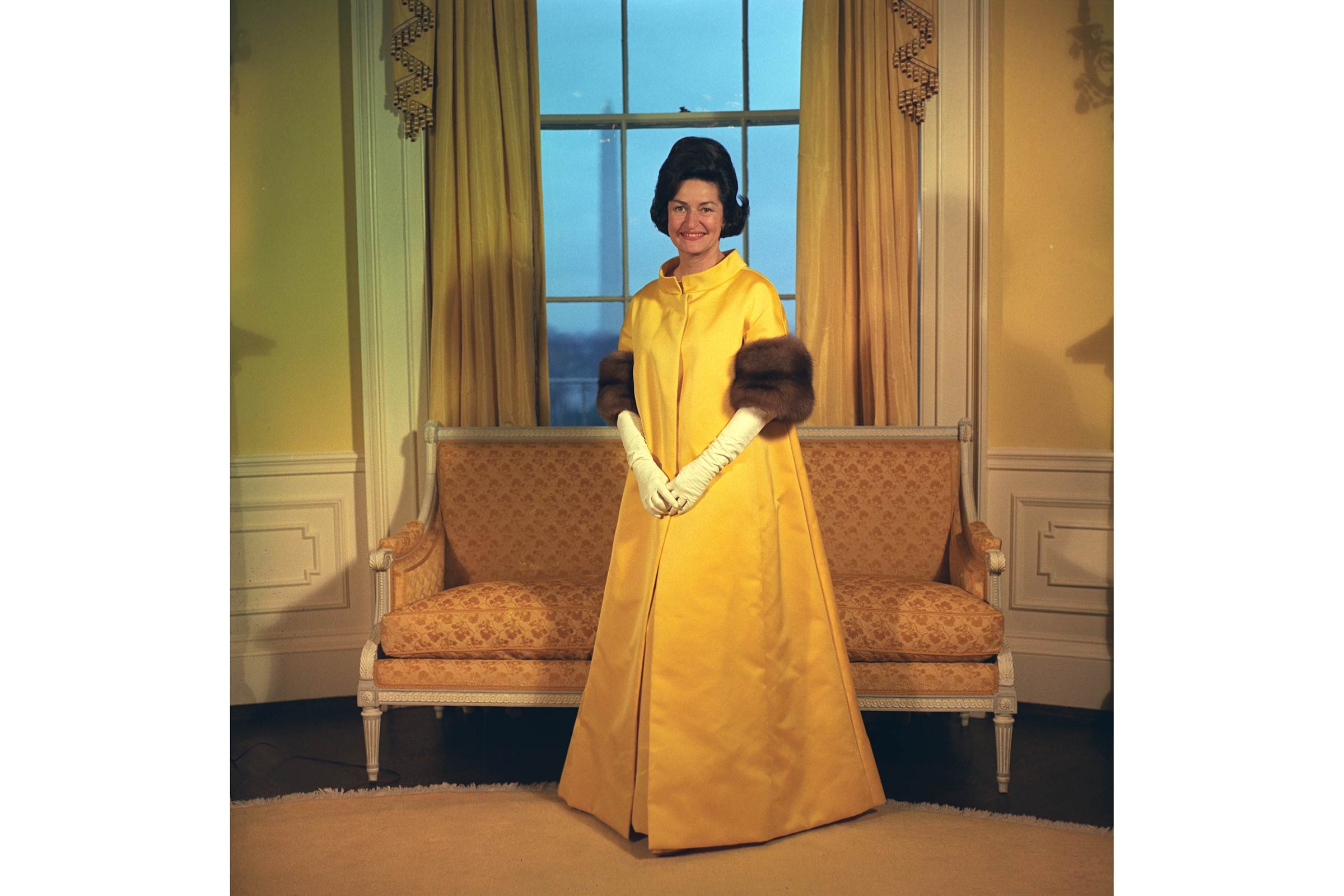 Lady Bird Johnson wasn’t your typical political spouse of the era. She was highly educated, ambitious, and a driving force behind her husband. For her inaugural gown, she chose a bold yellow gown by John Moore that she ordered through Neiman Marcus. According to Lady Bird Johnson, she chose a gown she thought would age well. Check out these 9 things that happen as soon as a new president takes office. 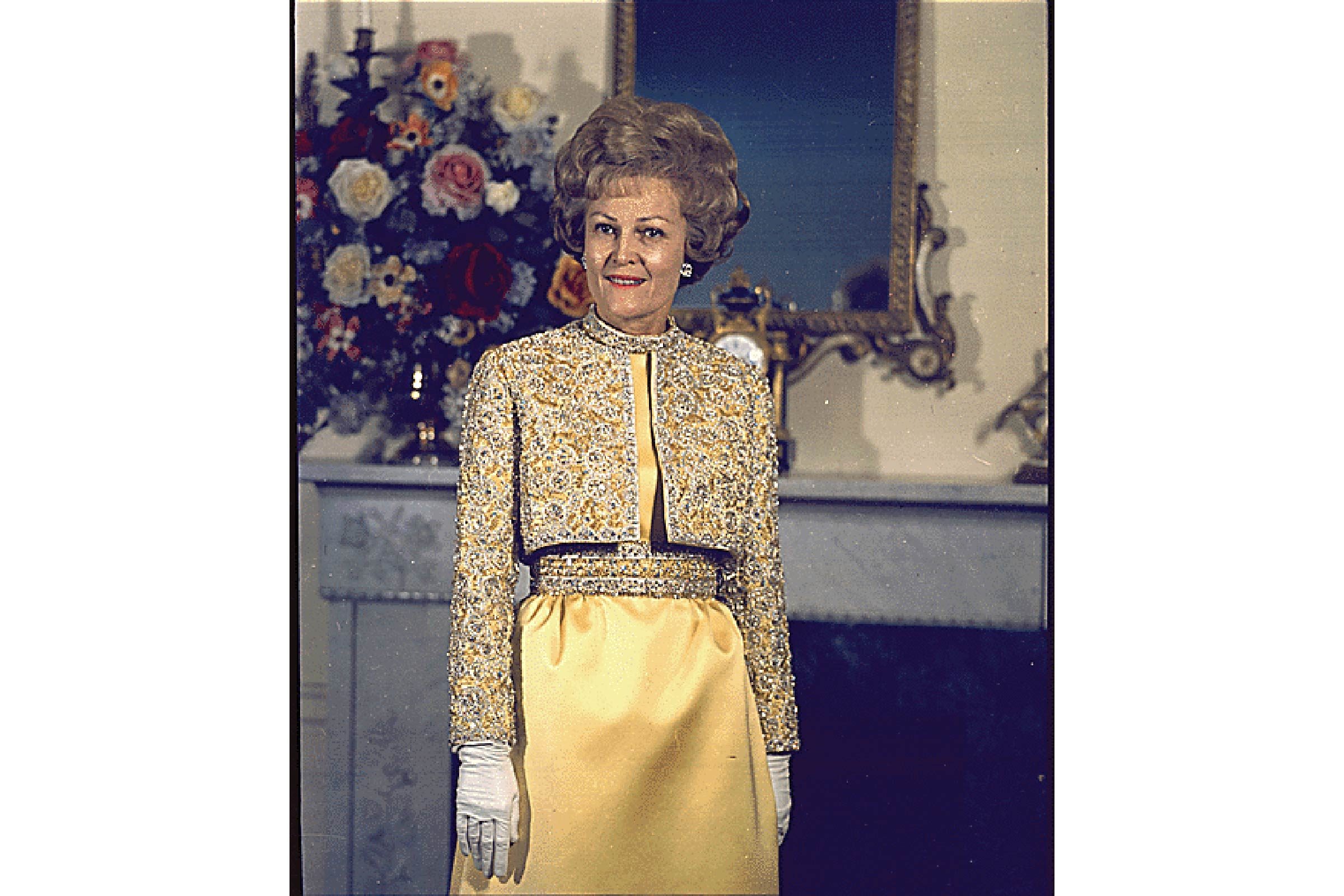 Going with the theme started by Lady Bird Johnson, Pat Nixon also chose a bold yellow gown by Karen Stark for Harvey Berin, but she added some extra pop. The gown featured gold and silver embroidery and was encrusted with Austrian crystals. Her husband President Richard Nixon is quoted as saying, “I like all of Pat’s dresses, particularly this one tonight, and…when she gets finished with it, you’ll get it at the Smithsonian.” Here’s why presidential inaugurations are always on January 20. 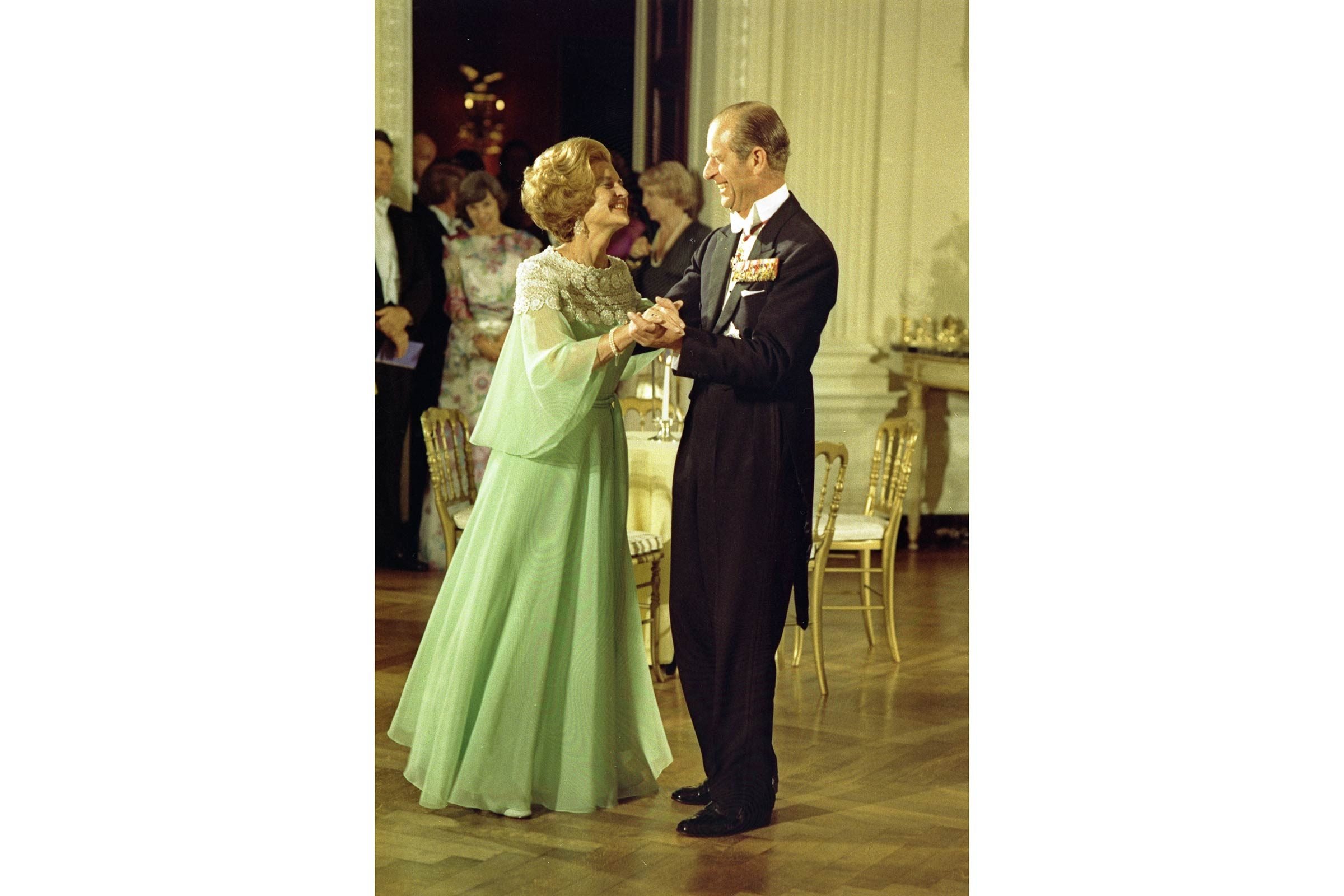 After Richard Nixon’s impeachment, there was no formal inauguration for incoming President Gerald Ford. But Betty Ford wore this pale-green sequined chiffon Frankie Welch design embroidered with a chrysanthemum pattern to several state dinners, so she donated it to the Smithsonian National Museum of American History as her inaugural gown. Learn some facts about U.S. presidents that everyone gets wrong. 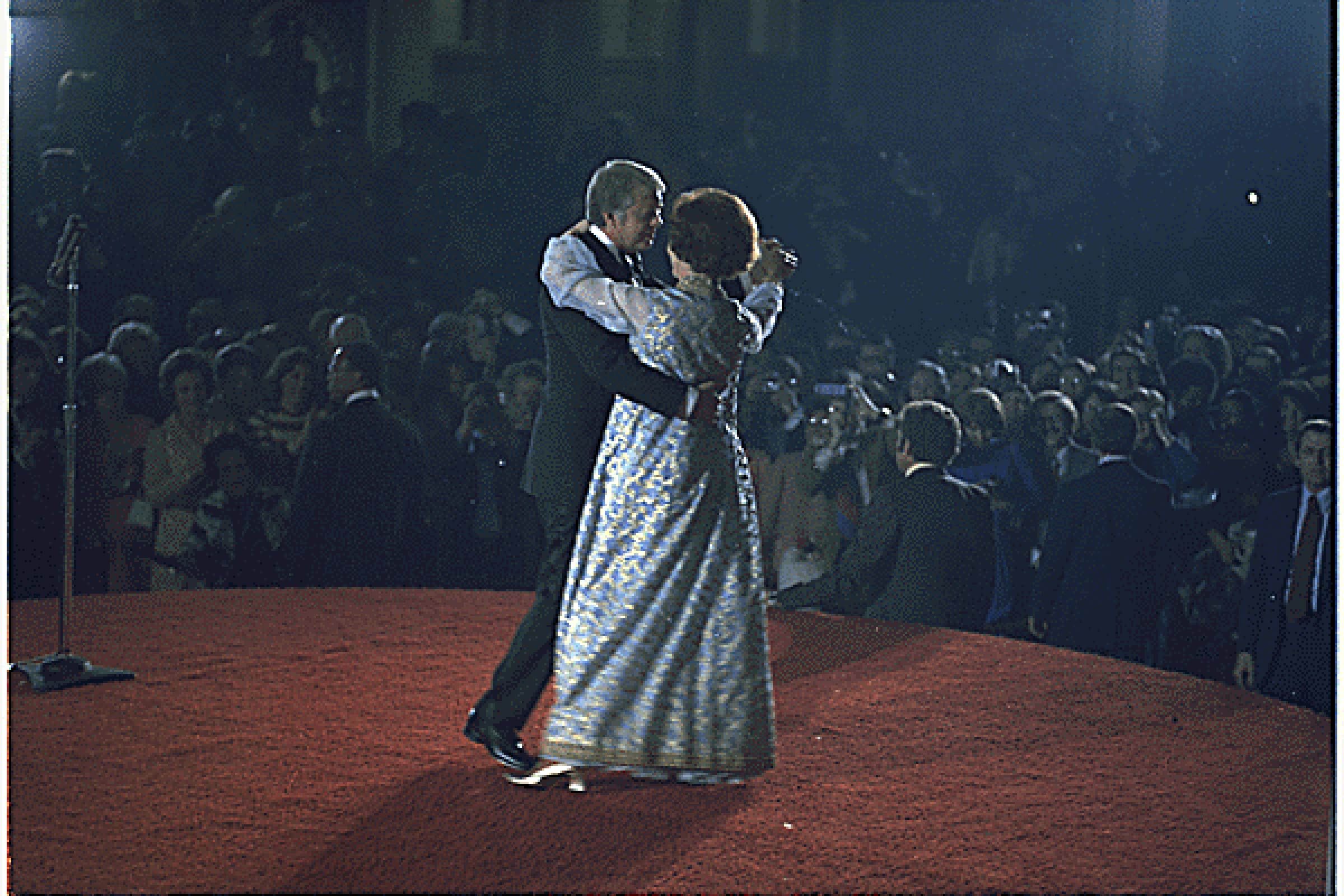 First Lady Rosalynn Carter may have been the Kate Middleton of her time. Instead of splurging on a new dress, the new FLOTUS wore the same gown (which she purchased off the rack!) she wore to her husband Jimmy Carter’s gubernatorial ball in 1971. And it’s easy to see why: Her classic gold-trimmed blue chiffon gown by Mary Matise for Jimmae has survived the test of time. Here are 10 everyday things that no U.S. president is allowed to do in office. 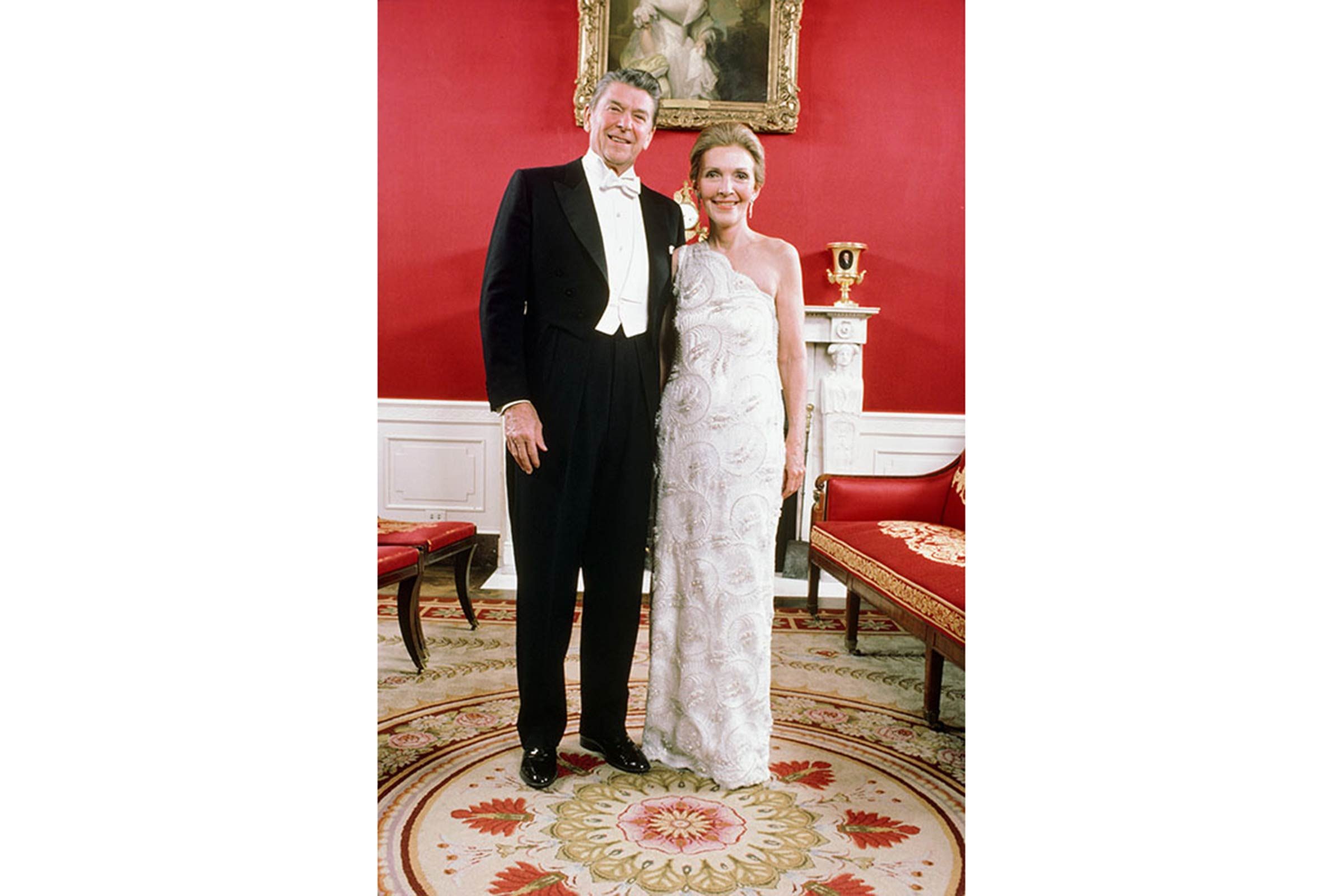 Throughout her husband’s presidency and even after, Nancy Reagan was a known fashionista, often shopping in Beverly Hills on famed Rodeo Drive in her later years. For her inauguration gown, she chose a one-shoulder James Galanos beaded sheath gown. This wasn’t the first time Reagan wore Galanos. She donned his designs for her husband’s gubernatorial inauguration ball as well. It was reported that Reagan’s gown cost over $10,000 (although it’s unlikely she paid for it). Read about the romantic way Nancy and Ronald and other presidents and first ladies met. 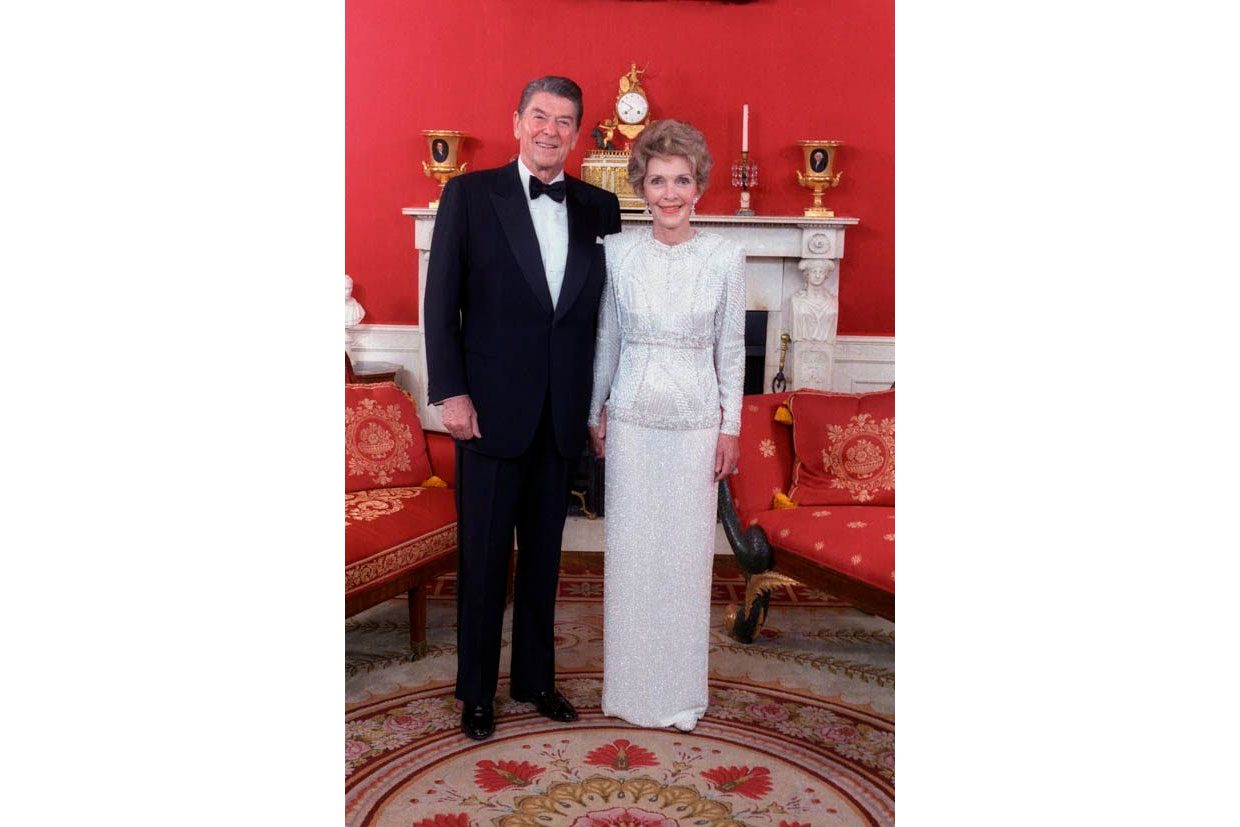 Once again, Nancy Reagan donned James Galanos for her husband’s second inauguration, but this time she wowed in a full-length, white chiffon, beaded gown. According to CBS, the Austrian and Czechoslovakian glass beads were applied by hand, which took over 300 hours to do. Learn some surprising facts you never knew about the White House. 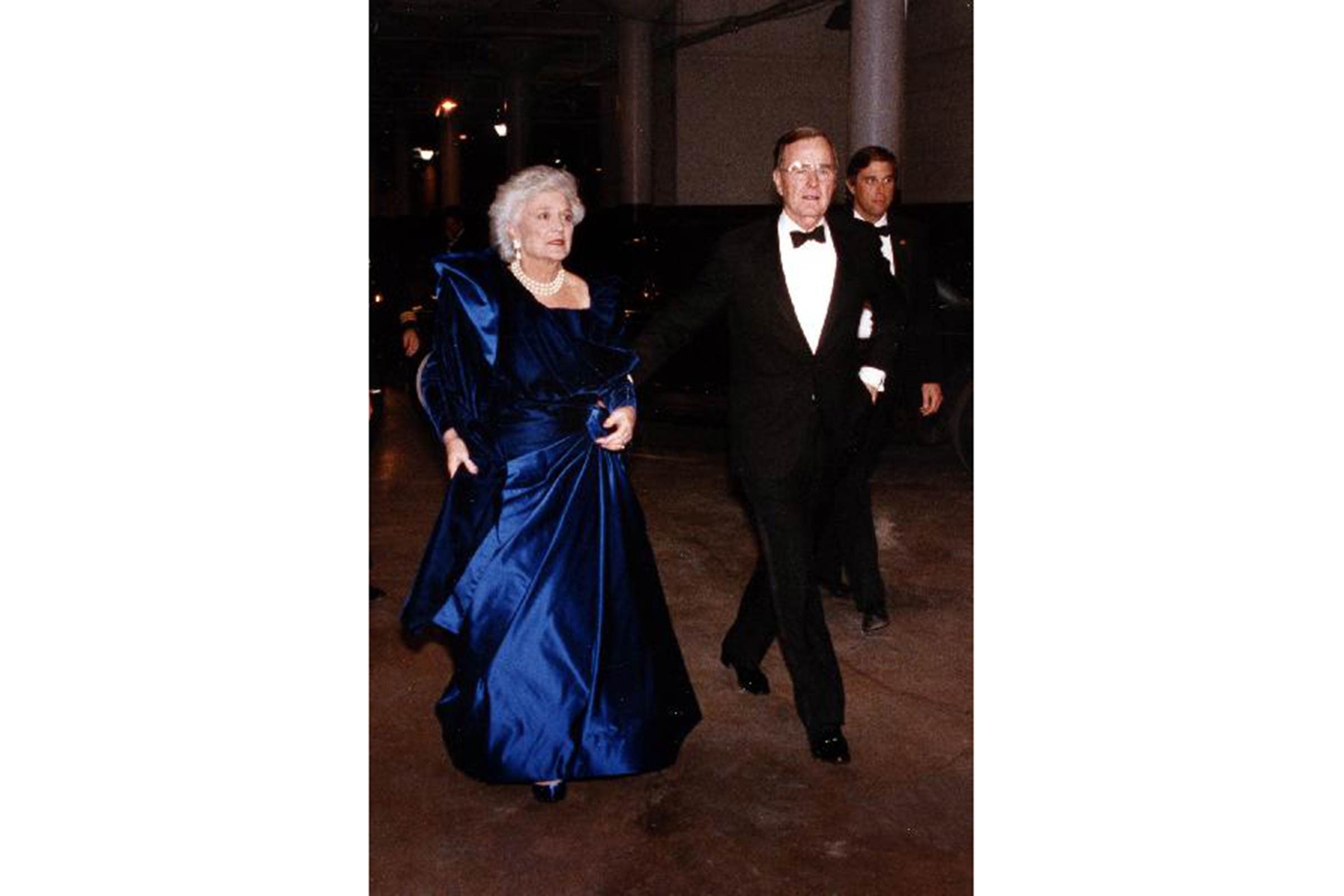 At age 63, Barbara Bush was the oldest First Lady in over a century. But that didn’t mean she had to dress like it. For her inauguration gown, she chose a velvet blue bodice with asymmetrical draped satin skirt by Arnold Scassi, who once noted that Bush suddenly was “the most glamorous grandmother in the United States.” Check out these things that former presidents aren’t allowed to do after leaving office. 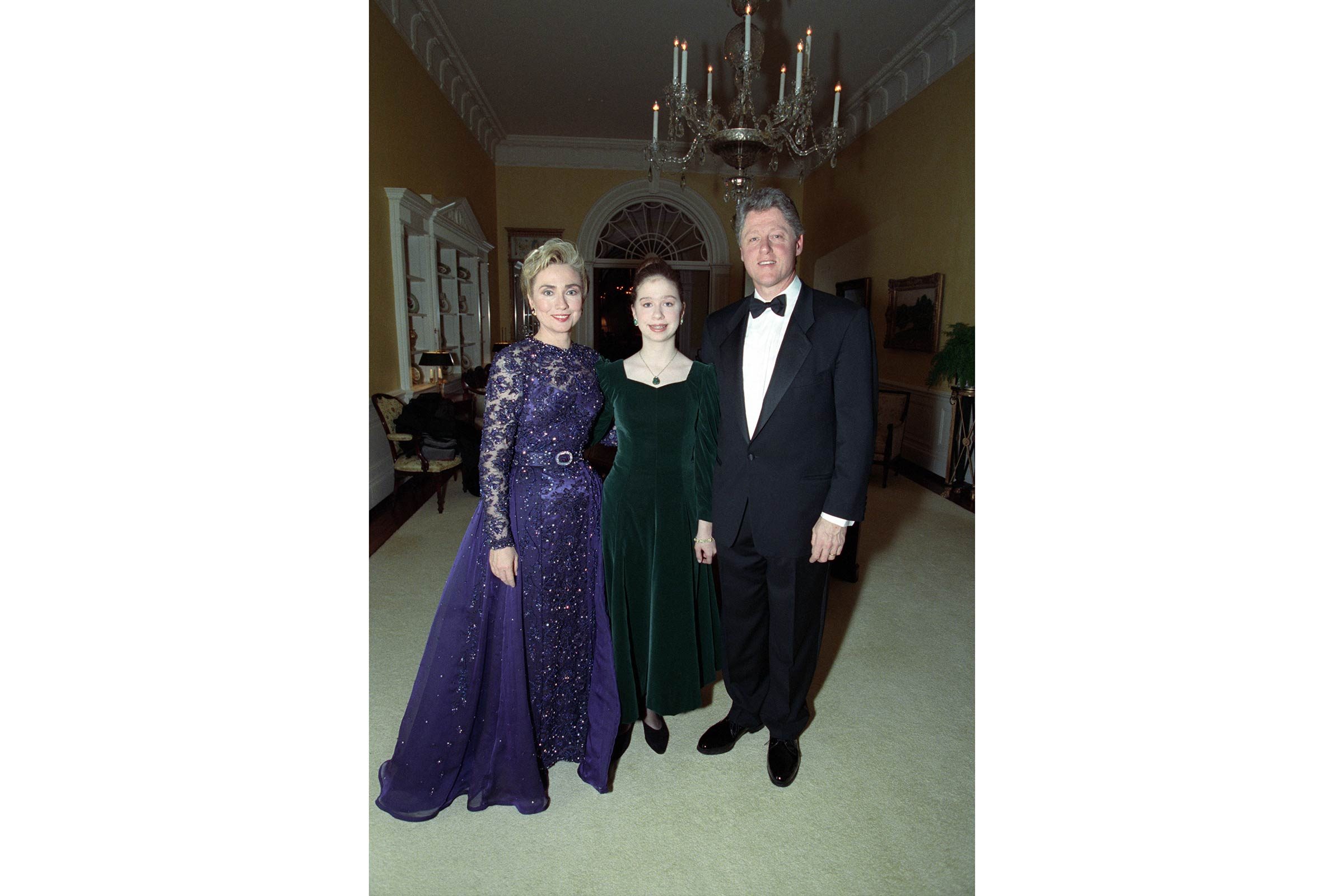 Before she was the queen of the pantsuit, Hillary Rodham Clinton was a glamorous First Lady. For her husband Bill Clinton’s first inauguration, she wore a violet Sarah Phillips lace gown with embroidered overlay. Purple, often associated with royalty, was a bold choice. 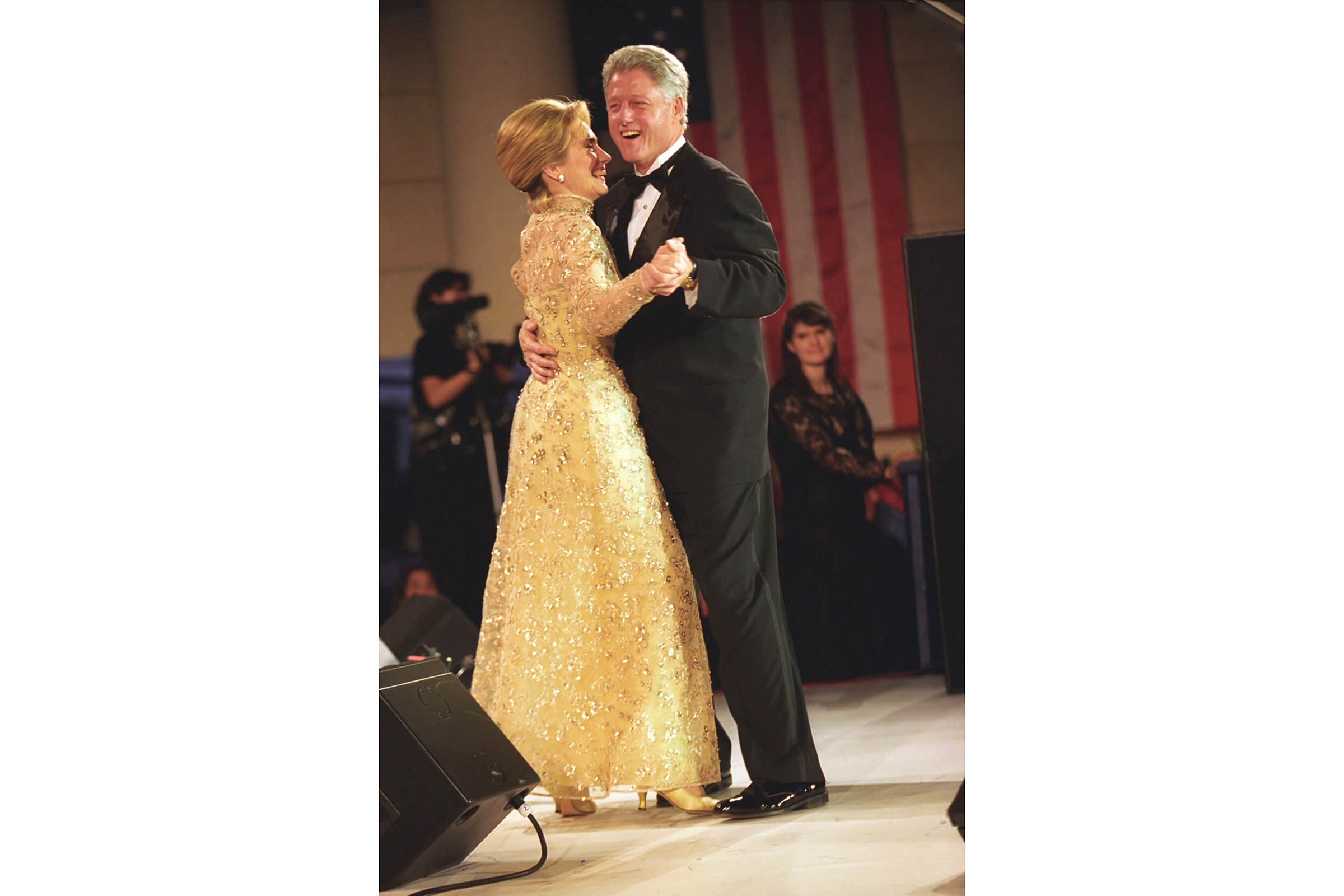 For Bill Clinton’s second inauguration, his FLOTUS wore a somewhat similar look to her Sarah Phillips gown. Hillary Clinton’s golden Oscar de la Renta creation also featured a sheer beaded overlay, but was less fitted in the waist than her previous purple gown. Throughout her fashionable life, Oscar de la Renta has been a favorite of Clinton’s. She also wore the designer for her daughter Chelsea’s wedding in 2010. Speaking of weddings, check out the most gorgeous royal wedding gowns in history. 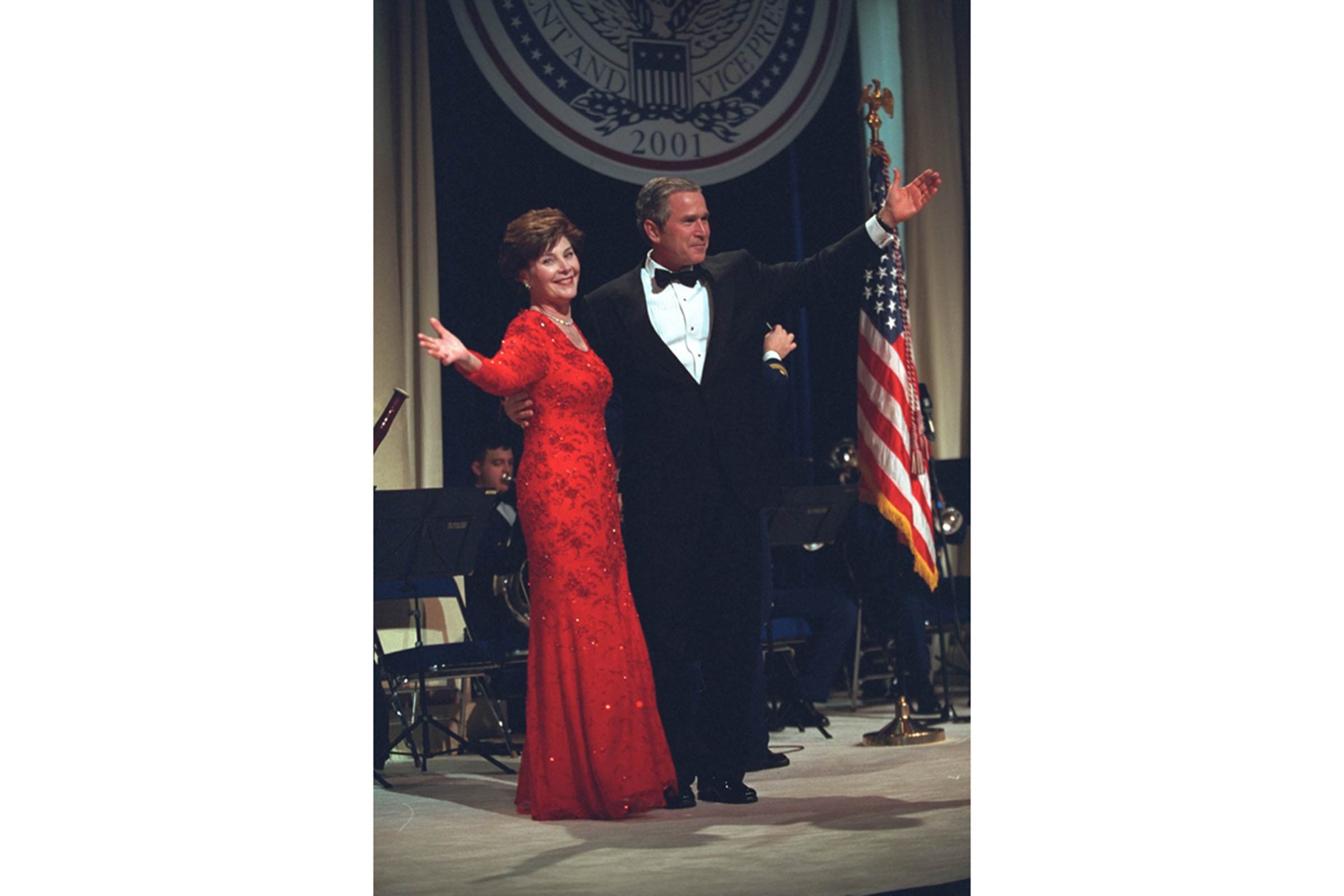 This second generation Bush First Lady was the lady in red for her husband’s first inauguration. She donned a bold red Michael Faircloth gown with crystal-embroidered Chantilly lace over silk georgette. Throughout her husband’s two terms, Bush usually wore more subdued colors in classic cuts. A portion of her book, Spoken from the Heart, details how Bush felt overwhelmed being in the public eye because she never kept up on fashion trends. Do you know about these odd things presidents banned from the White House? 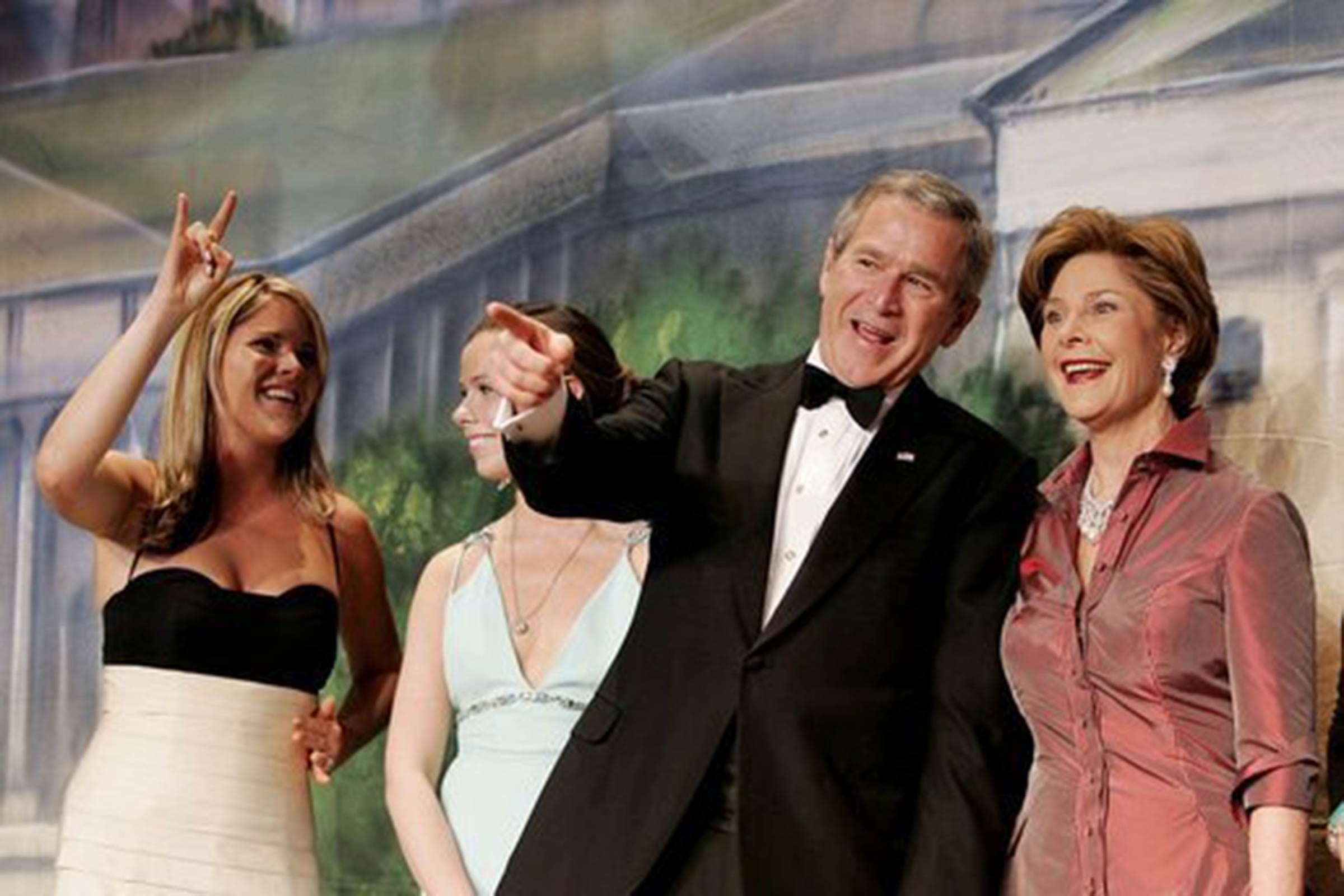 For her husband’s second inauguration, Laura Bush also chose red once again, although a bit more subdued. Her Carolina Herrera shirt dress gown fit better with her conservative style with a high neckline and three-quarter length sleeves. We bet you never knew about these 8 perks presidents get to keep after leaving office. 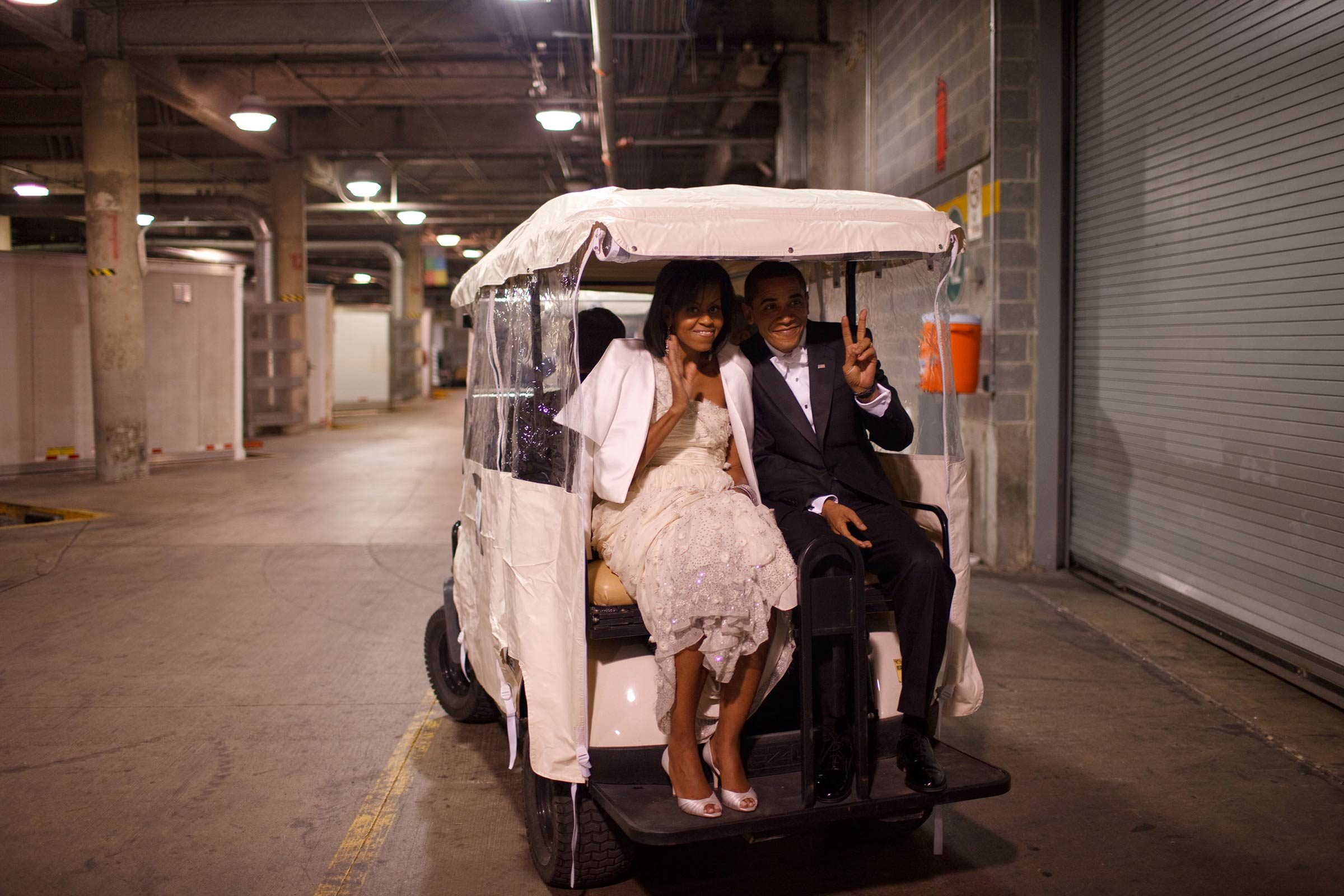 Style-wise, Michelle Obama broke the FLOTUS mold in many ways. She often chose unknown designers to highlight, loved to shop at Target, and also sported everyday brands like J. Crew. For President Obama’s first inauguration, she sported a glamorous one-shouldered white chiffon silk Jason Wu gown decorated with organza flowers. Until Obama sported the gown at the inaugural balls, designer Wu, relatively unknown at the time, had no idea she had chosen his design! 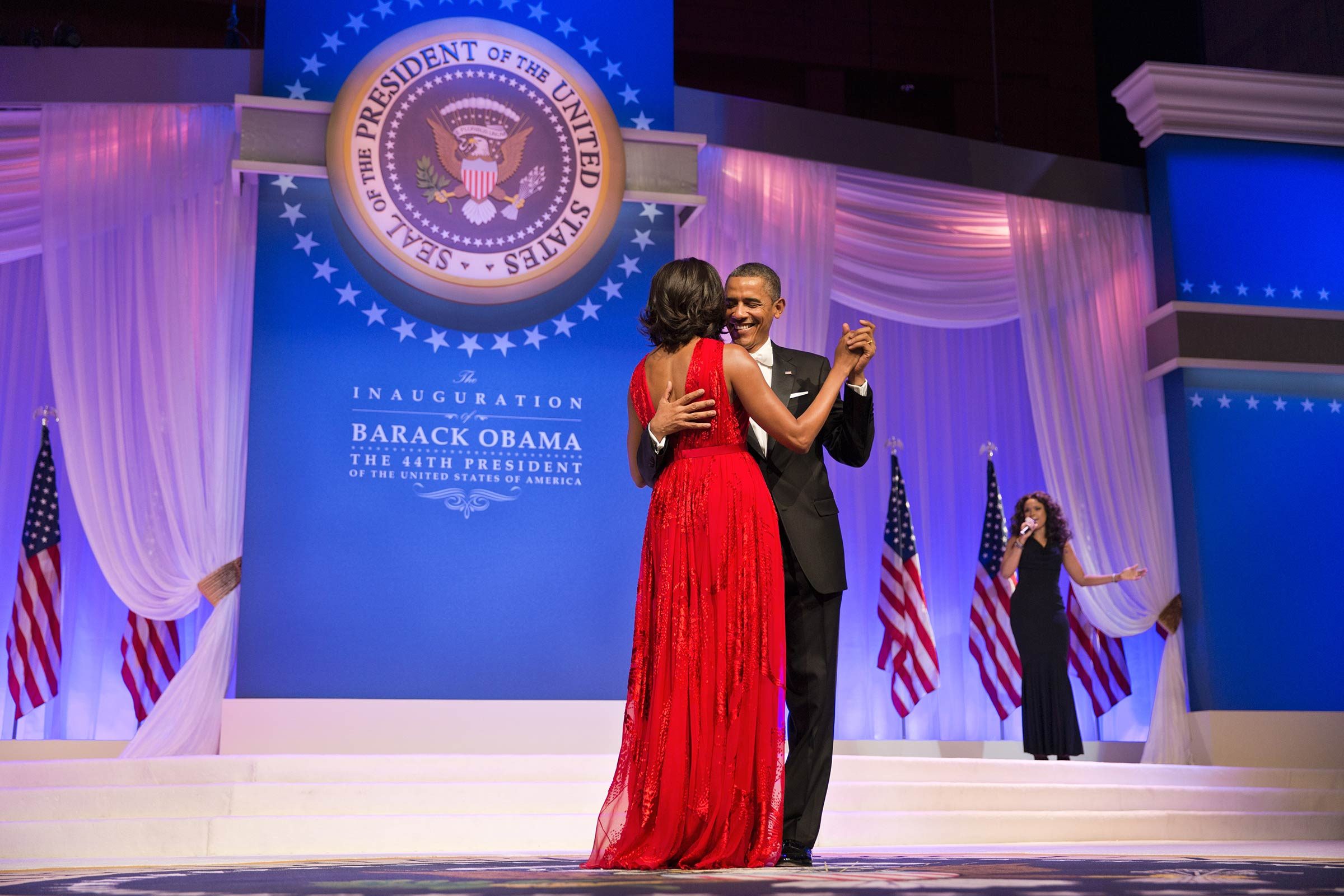 For her husband’s second inauguration, Michelle Obama once again turned to Jason Wu. This time, she wore a custom red chiffon look with a crisscross neckline, which showed off her toned shoulders and arms. Upon announcing her, President Obama reportedly said, “Some may dispute the quality of our president, but nobody disputes the quality of our first lady.” 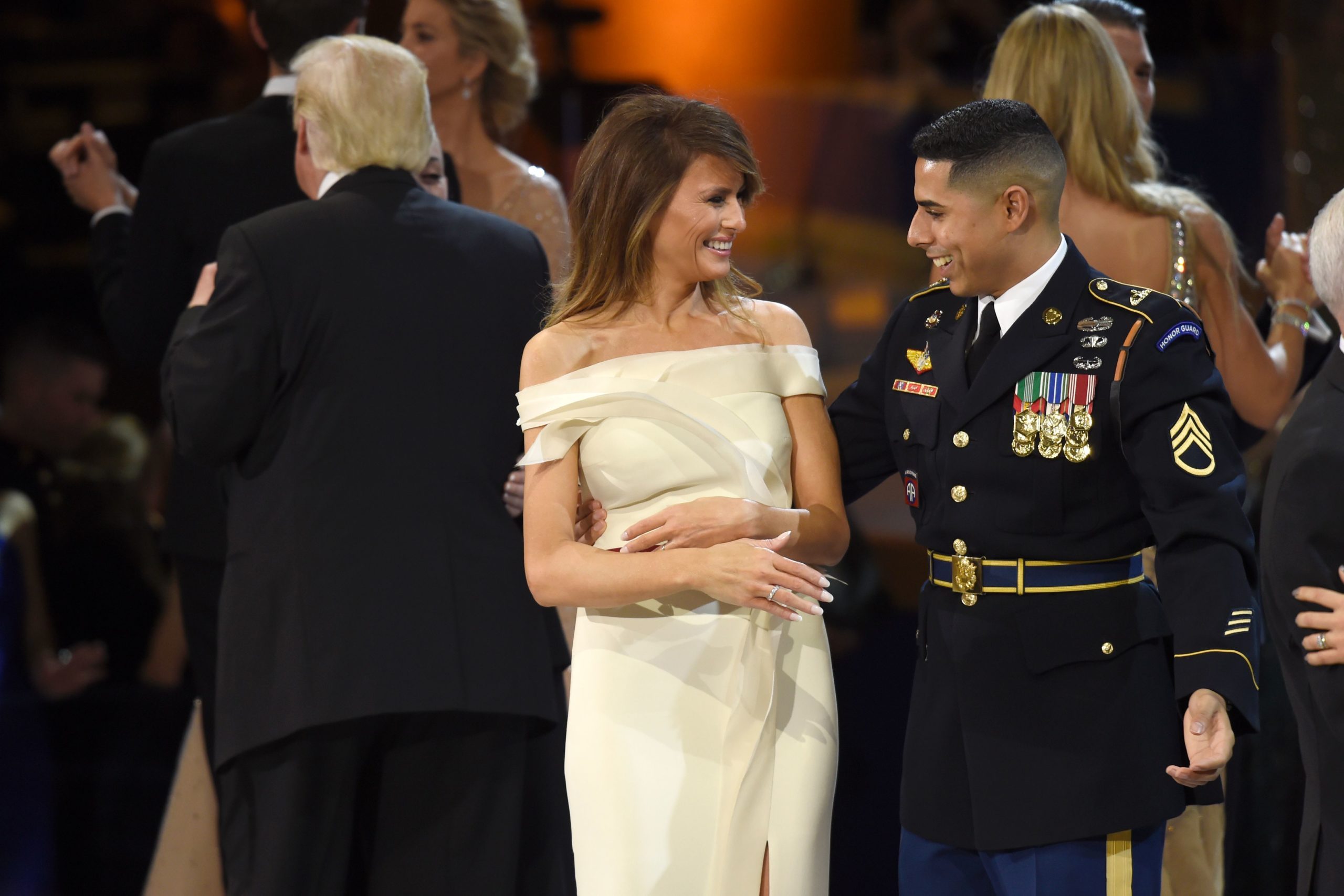 She may have left the White House with the lowest-ever popularity rating for a First Lady, but Melania Trump still dressed to impress at her husband’s 2017 inauguration. This simple, elegant white gown, with a red band around the waist, was the work of Hervé Pierre, a relatively unknown French-born designer who’d recently departed his job working as creative director for Carolina Herrera. Next, learn some surprising trivia you never knew about the First Ladies.

Felissa Benjamin Allard
Felissa Allard has worked at The New York Daily News, Health, Life & Style, About.com and more. As a freelancer, she has had pieces published on What To Expect, SELF, Good Housekeeping, Cosmopolitan, Modern Mom, Working Mother, and more. Her specialities are beauty, fashion, health, wellness, and parenting.