15 Common Foods That Are Toxic to Cats

Avoid a scary and potentially deadly scenario by making sure your feline friend avoids nibbling on these common foods toxic to cats.

Most cats are finicky eaters, but that doesn’t mean they’ll always avoid foods that are bad for them. Cats can develop the same bad habits as dogs, whether it’s mooching food at the table or swiping something tasty off the kitchen counter. And while some “people” foods are safe for pets, other foods are actually toxic to cats—even in small amounts.

“The two most important things to remember are that all pet foods are designed to be nutritionally complete diets, meaning that they do not need to be supplemented with treats or additional foods,” says Travis Arndt, DVM, medical director of Animal Medical Center of Mid-America. “Secondly, cats and kittens’ digestive systems prefer a stable diet of the same food every day.” In case you’re wondering what that is, take a look at this vet-approved diet for cats, including the best dry food for them.

How can you tell if your cat is sick? Food toxicity can take different forms, from an upset stomach and diarrhea to jaundice, seizures, and even death. Plus, two cats who eat the same “off-limits” food may have different reactions, so it can be difficult to know when to call the vet. “Suppose your cat is experiencing any of the possible symptoms associated with eating a toxic food or you have seen them eat the offending food,” says veterinarian Michelle Burch, DVM, who works with Safe Hounds Pet Insurance. “In that case, I recommend a veterinary evaluation with either your primary veterinarian or an emergency hospital.”

If you’re unsure whether your cat needs a medical evaluation, try calling the ASPCA Animal Poison Control Center (888-426-4435) or the Pet Poison Hotline (855-764-7661). You’ll also want to follow these protocols if you have a dog who’s eaten a toxic food. But back to your feline friend: You’ll want to make sure to keep the following foods out of paw’s reach to avoid a scary situation in the first place. 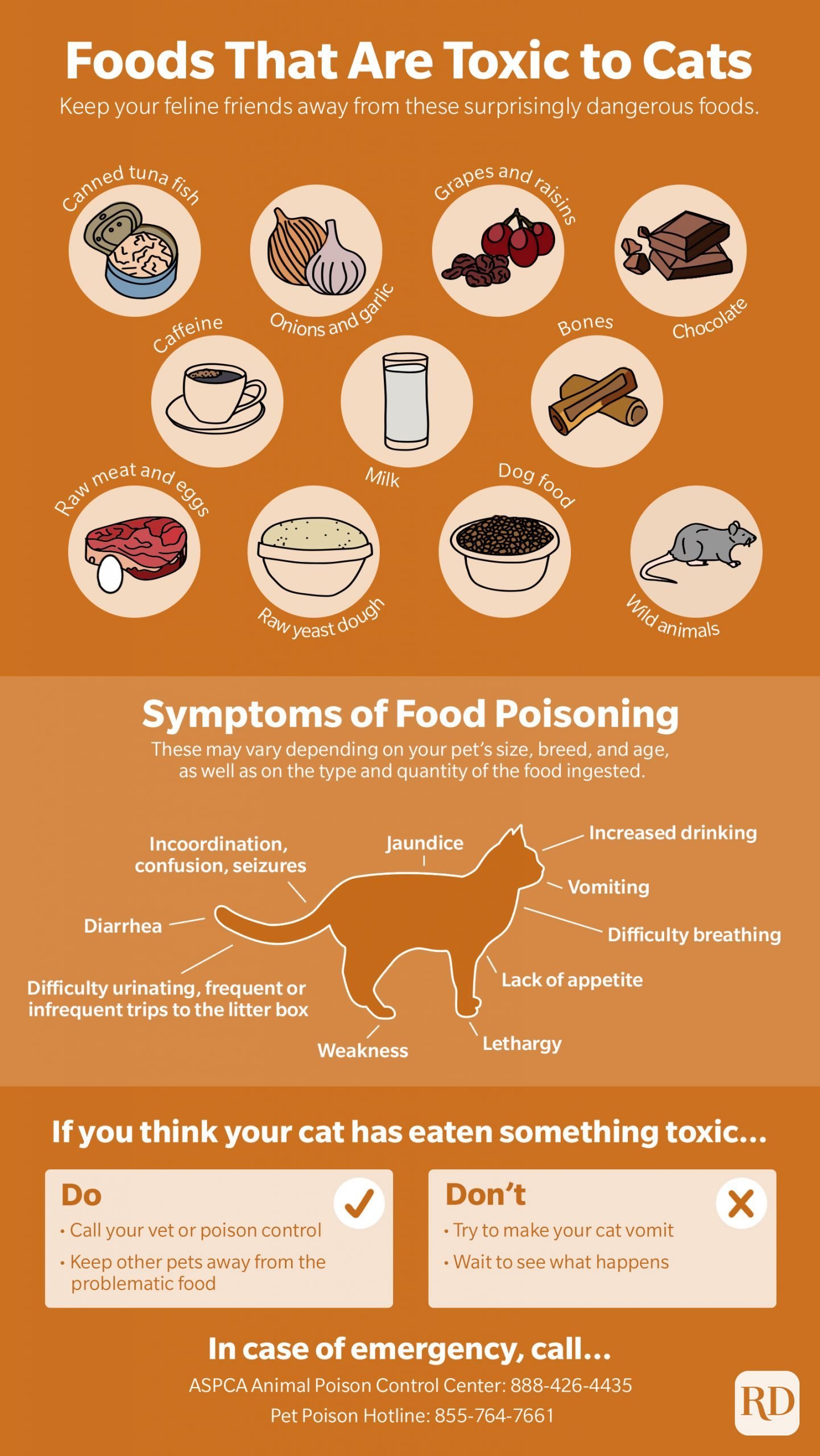 Few cats will turn down canned tuna. But anything more than a little nibble here and there can be highly dangerous. “If canned tuna is less than 10 percent of their total diet intake, it will be OK,” says Dr. Burch. But more than that, she explains, and they could actually end up with a nutritional deficiency, since they need essential vitamins and minerals, especially calcium, that are not found in tuna fish.

On top of that, tuna meat, especially red tuna, can cause a thiamine deficiency, leading to neurological symptoms including mental dullness, incoordination, blindness, head tilt, abnormal eye movement, and seizures. “If a cat is not evaluated and treated promptly,” says Dr. Burch, “then thiamine deficiency can lead to death.”

Still not convinced? Dr. Burch adds that feeding large quantities of tuna fish to cats can severely increase their risk of developing pancreatitis, bleeding disorders, and lower urinary tract disease, which can lead to inflammation of the bladder and urethra, spasms, and possible urinary blockage. Lower urinary tract disease symptoms include blood in the urine, frequent trips to the litter box, straining to urinate, and belly pain. If your cat isn’t eating, food-related illness may be the reason.

Cats do like savory foods, but they should not be given anything cooked with onion and garlic—which even make an appearance in some baby food. These ingredients cause hemolytic anemia, making them high on the list of foods toxic to cats that you should avoid. “Damage to the red blood cell is caused by oxidative stress from eating onions and garlic, which exceeds the cells’ antioxidant capabilities,” explains Dr. Burch. “Cats are among the most sensitive species to this damage due to low catalase activity and a high risk of red blood cell oxidative injury.”

Symptoms of garlic toxicity are usually seen within 24 hours of ingestion, but they may also be delayed for up to seven days. “After the damage to the red blood cells has become significant, cats can show lethargy, unwillingness to eat, increased breathing rate, increased heart rate, weakness, exercise intolerance, jaundice color to the gums, eyes, and skin, and have red to brown urine,” says Dr. Burch. You’ll also want to make sure not to grow onions or garlic in your garden or on your windowsill. The same goes for these other plants that are poisonous to cats.

Grapes and raisins are 100 percent off limits—there’s no safe minimum. “Until recently, veterinarians were unsure of the exact component that caused grape and raisin toxicity,” says Dr. Burch. But recent studies suggest that tartaric acid may be the culprit. She says the tartaric acid concentrations in grapes may vary based on their type, how they were grown, and how ripe they are. The varying amounts of tartaric acid in each grape can explain why some animals become very sick and others seem not to be affected, but toxicity from ingesting these foods can cause rapid kidney failure. “Symptoms can begin as quickly as 24 hours after ingestion,” says Dr. Burch, “with vomiting, increased drinking, lack of appetite, decreased urination, and painful belly.” Here are more fruits (and vegetables) dogs can’t eat.

We hope your cat doesn’t have a hankering for Starbucks or Red Bull. The caffeine in brewed coffee, coffee grounds, or energy drinks can cause vomiting, diarrhea, elevated body temperature, tremors, heart arrhythmia, and seizures, according to Dr. Burch. “Your cat will most likely need to ingest large amounts of these drinks before toxicity occurs,” she explains, “but if any of these symptoms are seen in your cat, I recommend a veterinary evaluation.”

While chocolate may have health benefits for humans, it’s a well-known toxin for dogs. Turns out, cats shouldn’t go snacking on chocolate bonbons either—sorry, kitty! Dr. Burch says that most cats do not have a sweet tooth, so they won’t seek out chocolate. Most cats, that is.

“The substances found in chocolate that are toxic to dogs and cats are called methylxanthines,” explains Dr. Burch. “Ingestion of these substances will cause vomiting, diarrhea, increased body temperature, muscle tremors, abnormal heart rhythm, belly pain, discomfort, increased drinking, and seizures—the darker the chocolate, the higher concentration of methylxanthines present.” Baking chocolate is the worst, FYI. Even a small square of it can make your cat seriously ill.

Cats may love to lap milk from a saucer, but that doesn’t mean it’s good for them. Felines are actually lactose intolerant, explains Dr. Burch, so they shouldn’t have milk, cheese, yogurt, or any other dairy products, even if they beg for them. Dr. Arndt adds that “while cats may enjoy the taste of dairy products, kittens lose the ability to digest lactose soon after being weaned from their mother. The undigested lactose causes bacterial overgrowth in the cat’s intestines and diarrhea.” Dr. Burch also says to be wary of “cat milk” treats that are formulated with reduced lactose, as they may still cause stomach upset.

Cats might enjoy a nice beef bone as much as their canine brethren do, but resist the urge to slip one under the table to your kitty. While they’re not foods toxic to cats per se, “the bones can cause tooth fracture, resulting in pulp exposure, which can be painful and lead to tooth-root infections if not dealt with promptly,” warns Dr. Burch. Additionally, bone fragments can cause choking, injury to the intestinal tract, or become obstructed in their intestines, and they might require surgical removal. “Symptoms from injury from bone ingestion can include gasping for air when choking, vomiting, diarrhea, lethargy, or lack of interest in their regular diet,” Dr. Burch notes. And don’t think that fish is any safer for a cat. Dr. Arndt says that “feeding fresh fish can also present dangers of cats ingesting small bones and getting them caught in their throat or GI tract.” Of course, food isn’t the only danger you need to be aware of: These household items are also seriously hazardous to your pets.

Your cat may be king of his household jungle, but he still shouldn’t chow down on raw meat or uncooked eggs, due to the high risk of foodborne illness. “If your cat is eating these items, they are at higher risk of contracting salmonella or E. coli,” says Dr. Burch. “These foodborne diseases can also be spread from your cat to yourself or your family members, especially if you have a compromised immune system. Symptoms of a foodborne illness include vomiting, diarrhea, and lethargy.”

It might seem harmless enough, but any raw dough that contains yeast is potentially very harmful to cats. The dough will cause severe distention (swelling) of the stomach, says Dr. Burch, and it also creates alcohol, which basically makes the cat drunk. (Yes, you read that right.) “After eating raw yeast dough,” says Dr. Burch, “symptoms include vomiting, diarrhea, tremors, disorientation, trouble breathing, and even death.”

Your cat and dog may be best pals, but they shouldn’t share the same food bowl. “Dog food accidentally eaten for one meal is not toxic to your cat,” says Dr. Burch, “but if they are fed solely dog food for an extended period, then adverse effects can be seen.” Cat food is formulated to have higher amounts of vitamin A, taurine, arachidonic acid, and protein than dog food, she explains. Taurine deficiency can lead to severe problems, like heart disease, vision abnormalities, and dental issues. “Symptoms of heart disease associated with a taurine deficiency can include increased respiratory effort, decreased activity levels, coughing, or sudden death,” she notes.

While this obviously isn’t a common food for you, it may be for your mighty huntress of a cat. There are plenty of good reasons to keep your cat indoors, not the least of which are the 14 billion birds and wild animals that pet and feral cats kill each year—in the United States alone. Another reason to keep your cat from stalking wild prey is that the animals she catches could be poisonous if she eats them. An ingested bird may result only in vomiting or diarrhea. But mice and rats carry an array of nasty parasites, and some may have ingested rodent poison before your cat gets to them—which could be fatal to your cat.

Eating lizards, frogs, and toads carries the same risk. Lizards are prone to liver flukes, a toxic parasite, and certain frogs and toads are venomous and potentially fatal to cats. Darcia Kostiuk, DVM, senior veterinarian for Orijen and Acana pet foods, cites Bufo toads, which are native to Central and South America but are an invasive species in Florida, Texas, and Colorado. “The skin of the toad contains a potent neurotoxin and cardiotoxin, and if a cat has oral contact with the toad, the cat can display symptoms of weakness, cardiac arrhythmia, seizures, coma, and death.” In case you were wondering, this is why cats bring home those dead animals and often leave them right at your doorstep.

Elizabeth Heath
Elizabeth Heath is a travel, culinary and lifestyle writer based in rural Umbria, Italy. Her work has appeared in The Washington Post, HuffPost, Frommers.com, TripSavvy and many other publications. Her guidebook, An Architecture Lover's Guide to Rome, was released in 2019. Liz's husband is a stonemason and together they are passionate about the great outdoors, endless home improvement projects, dogs, their unruly garden and their slightly less unruly 8-year-old.