Our home planet is replete with natural phenomena that have challenged explanation—and led to a whole lot of myth-making. 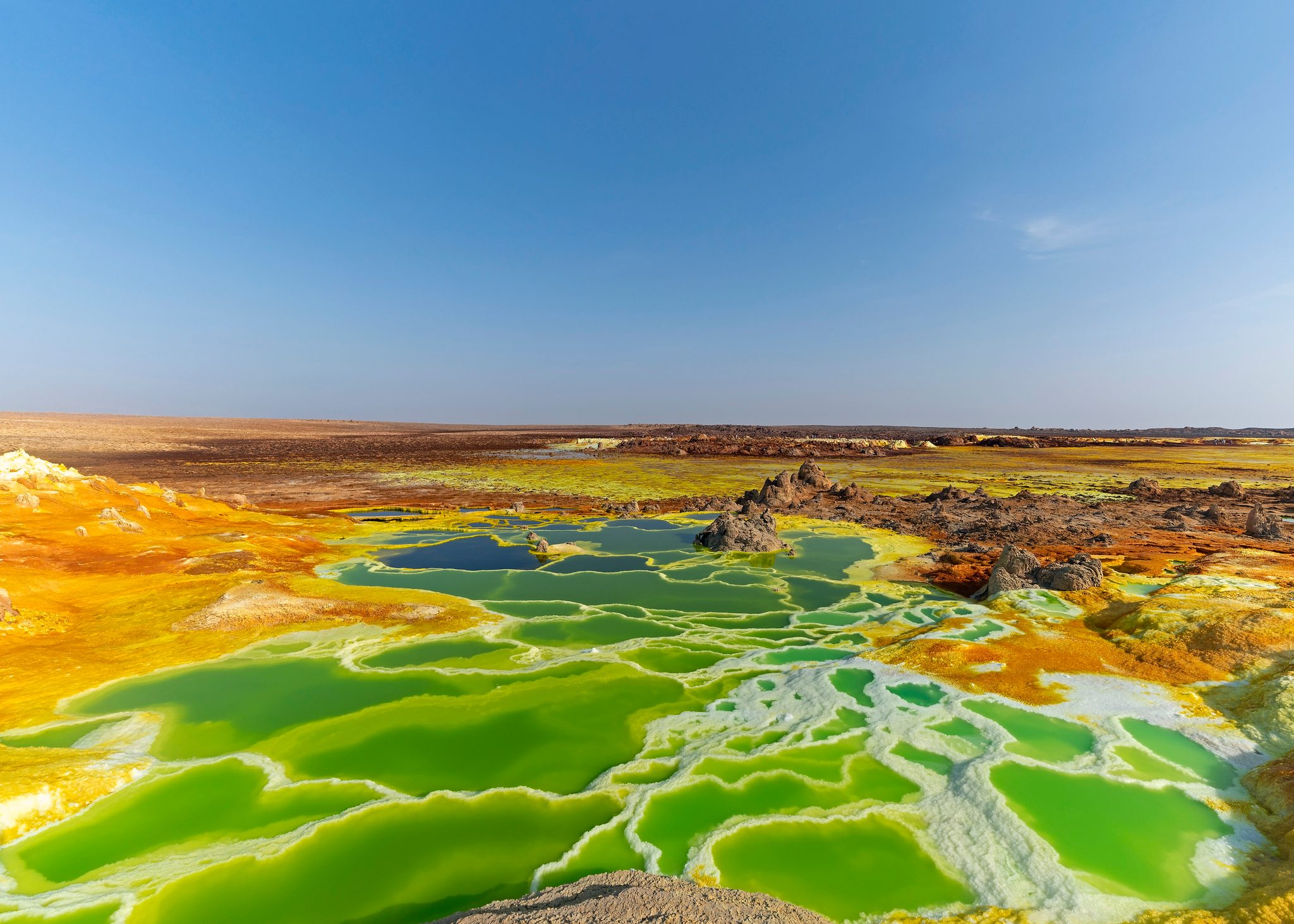 A strange and beautiful world

Some of the strangest, most beautiful sights in the universe occur right here on the planet Earth. Before humans developed the miraculous tool of scientific methodology, our earlier selves devised all sorts of myths and legends for how these phenomena came into being, many originating with the spirit world—although alien invasions have factored into a lot of recent wishful-thinking-based attempts at explanation. As we document below, some of these wonders of the natural world have already been explained—sometimes simply, sometimes after many decades of research and thought—by scientists; the origins of others, though, continue to elude us. 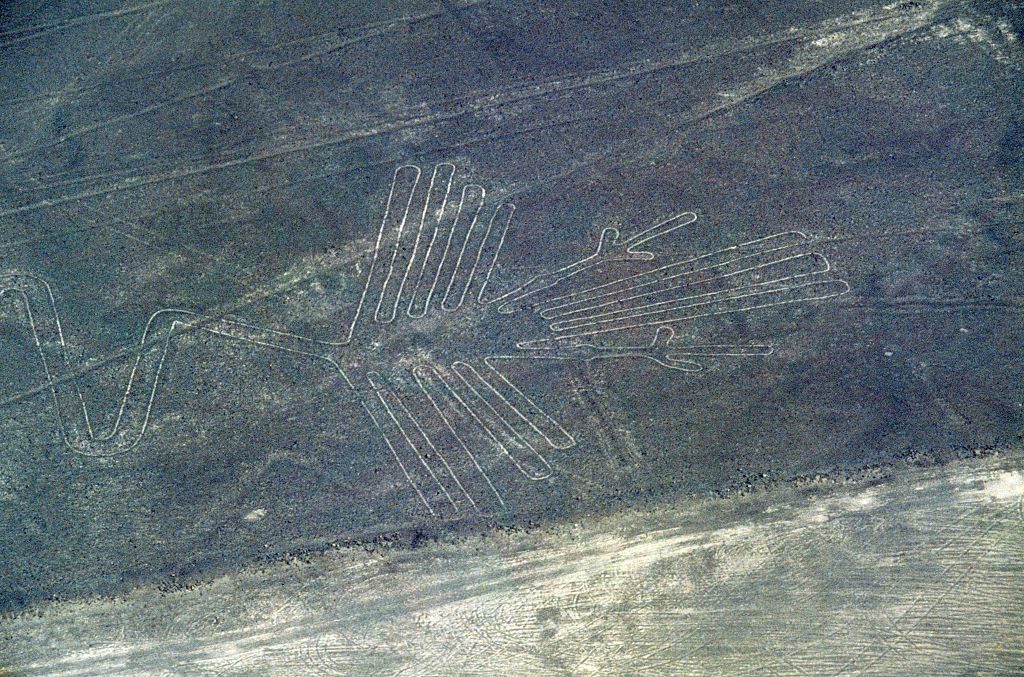 It was once believed by a certain subset of theorists that the thousands of geoglyphs scratched into a high desert plateau in Peru were the work of extraterrestrials trying to mark a landing site for their spaceships. But this Unesco World Heritage site is undeniably the work of ancient humans; the representation of a condor seen here, along with massive depictions of killer whales, flowers, hummingbirds, and monkeys, was the mind-boggling handiwork of the prehistoric Nazca people, who etched these lines between 200 BCE and 500 CE. Why and how? Those are questions that remain to be answered. Some scientists believe they’re somehow connected to the Nazca’s searches for drinking water, or that they represent constellations seen in the night sky. But how they were accomplished without sophisticated engineering tools is anyone’s guess—and the same goes for these other ongoing mysteries. 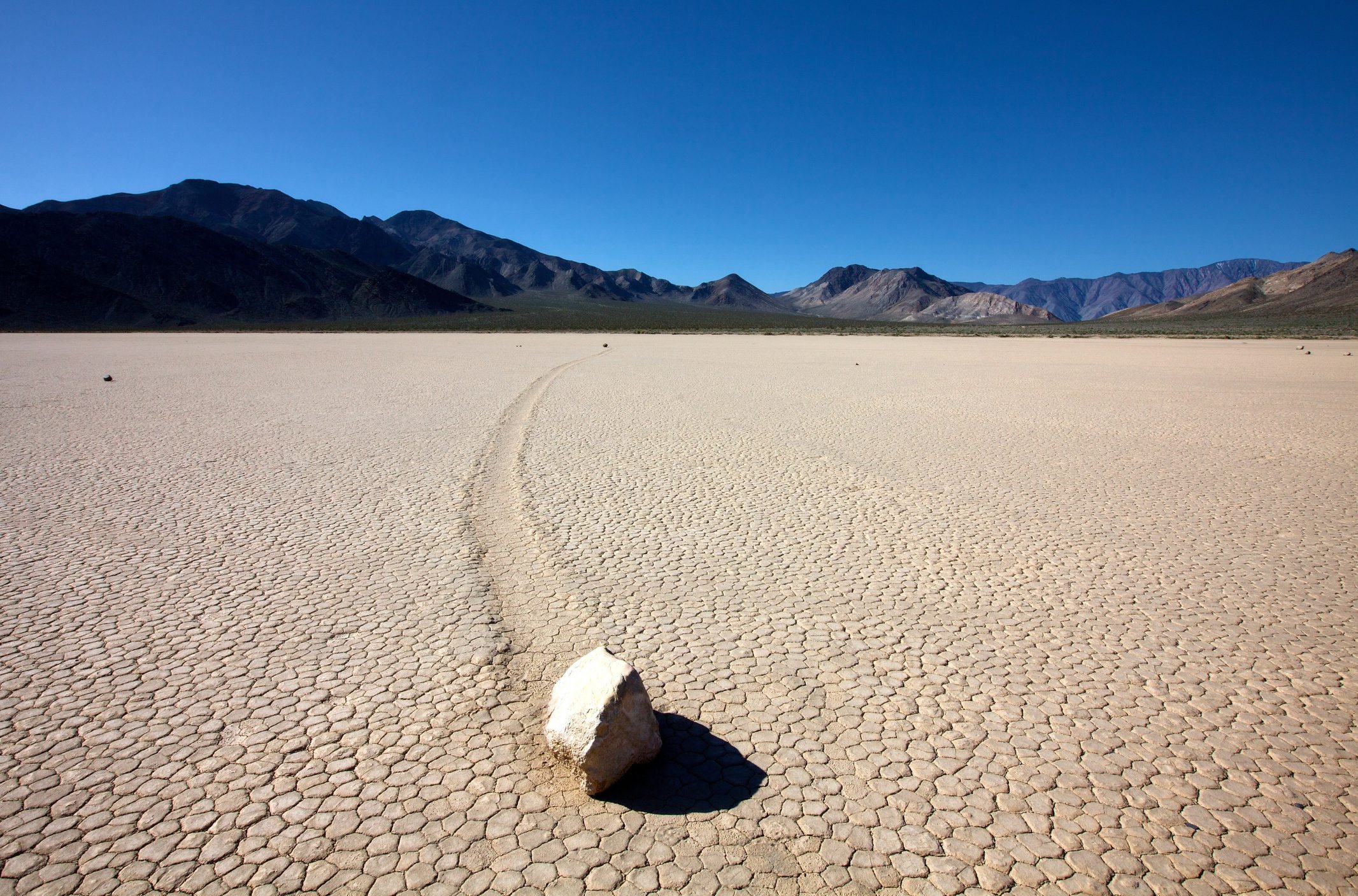 Death Valley’s Racetrack Playa is home to the mysterious sailing stones, which appear to move on their own overnight, even leaving trails in the mud. In the 100 years since this phenomenon was first noticed, scientists have theorized that magnetism was the cause for the movement (although other, less learned theories implicated aliens). However, in 2014, the sailing stones were studied up close and personal, and it was discovered that the dry lake bed on which they sit becomes covered in water when night comes, which quickly freezes. By morning, the ice has melted and this action, along with the region’s winds, propel the rocks inches or feet away from their day-before spots. 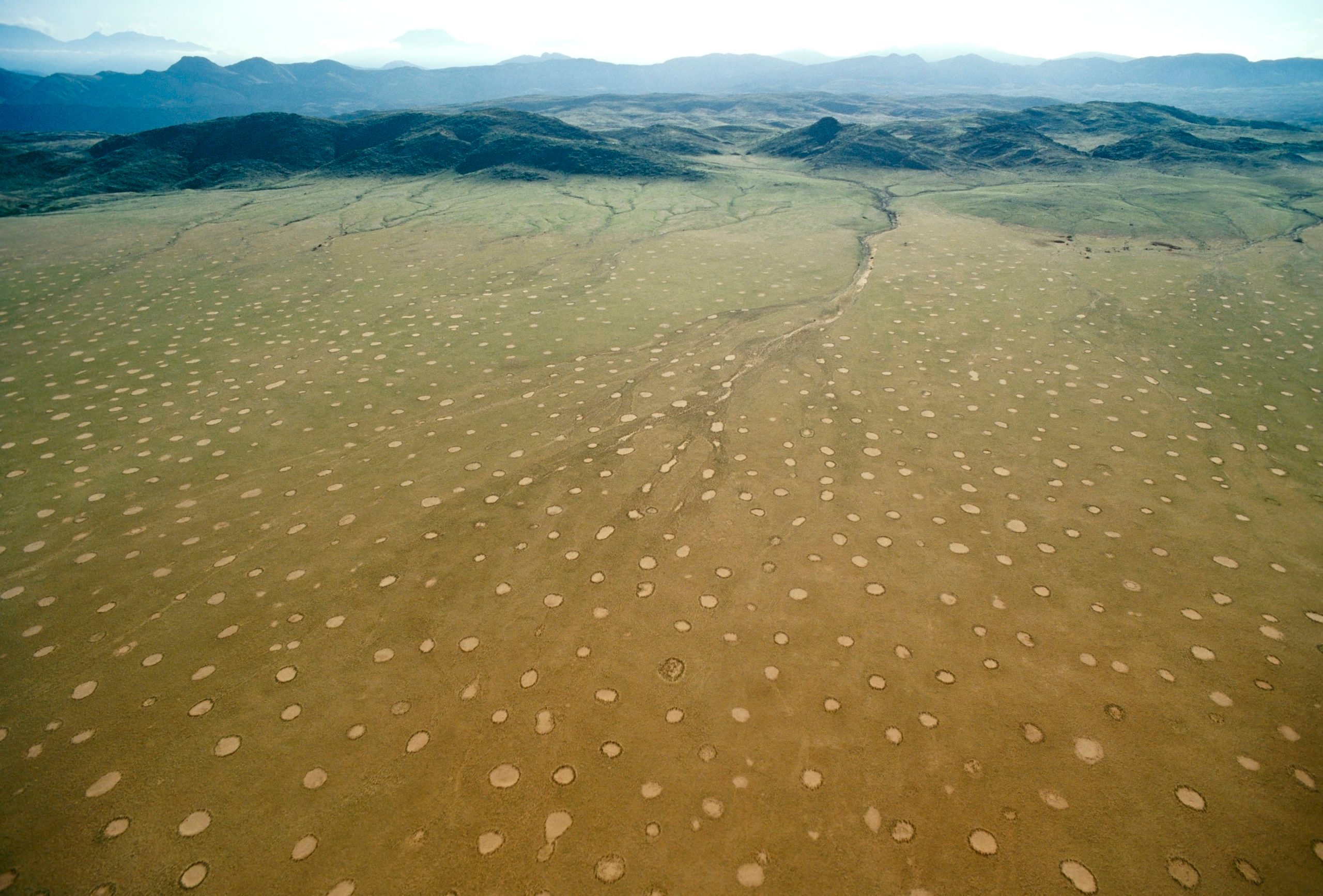 The Namib desert of Namibia is home to mysterious circles of vegetation, creating a landscape that mathematician Corina Tarnita described to Science Friday as looking “like a polka dot dress.” Measuring between 10 and 65 feet in diameter, these circles of barren-centered vegetation are not actually the work of fairies, or, according to local legend, of the gods leaving behind their footsteps. Still, the real cause remains elusive, with scientists hypothesizing that they are created by thirsty plants stretching out for water in an arid locale; or that underground networks of termites have munched the vegetation into shape. Another possibility? The circles were made by a whole host of factors. 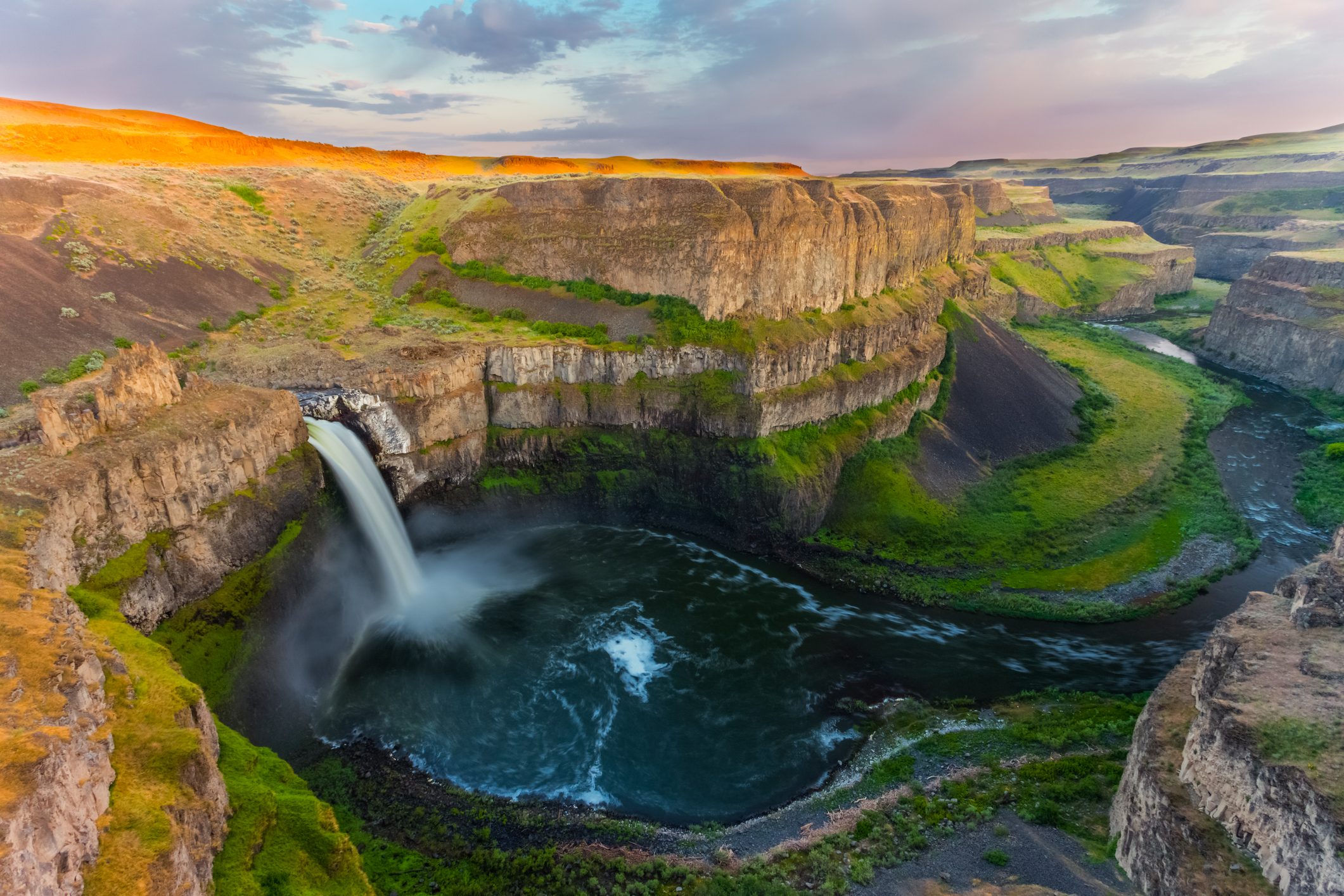 The odd-ball landscape of Washington State’s so-called “scablands” baffled geologists for decades; their basaltic features, including Palouse Falls pictured here, spread across some 16,000 miles of the Columbia Plateau, seemed to have been sculpted by a huge, rapidly-moving deluge of water—but there was no evidence to support this concept. Scientists couldn’t imagine where such floodwaters could have come from, nor where they wound up after they’d sculpted this terrain. But dogged, later, research led to the conclusion that the region had been created by not one, but as many as 80 floods over one or two thousand years. See some of the most beautiful waterfalls in every state. 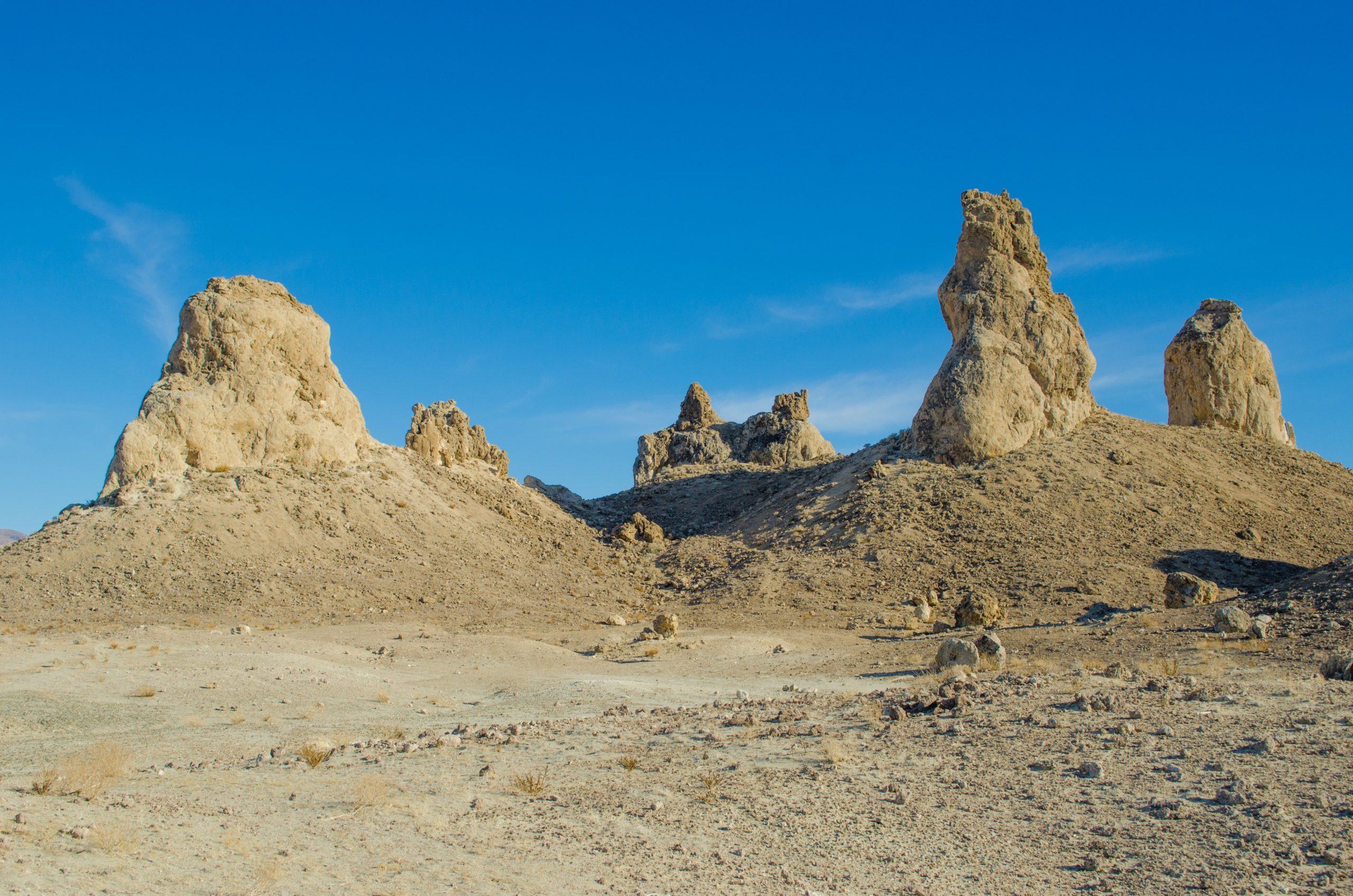 They’re so otherwordly-looking that the Trona Pinnacles, on the site of a U.S. Navy base in California, have been used as a backdrop in numerous movies set in outer space. But despite their alien appearance, there’s nothing really mysterious about these mini-mountains, some of which reach a height of 140 feet. They’re called tufa towers, and they’re made of calcium carbonate that formed underwater when freshwater met and interacted with the alkaline water of Mono Lake. This lake itself is about a million years old, and thanks to minerals that continue to wash into it from surrounding lakes, it’s 2-1/2 times saltier than the ocean. It’s also home to some unusual, new-to-science, wildlife. 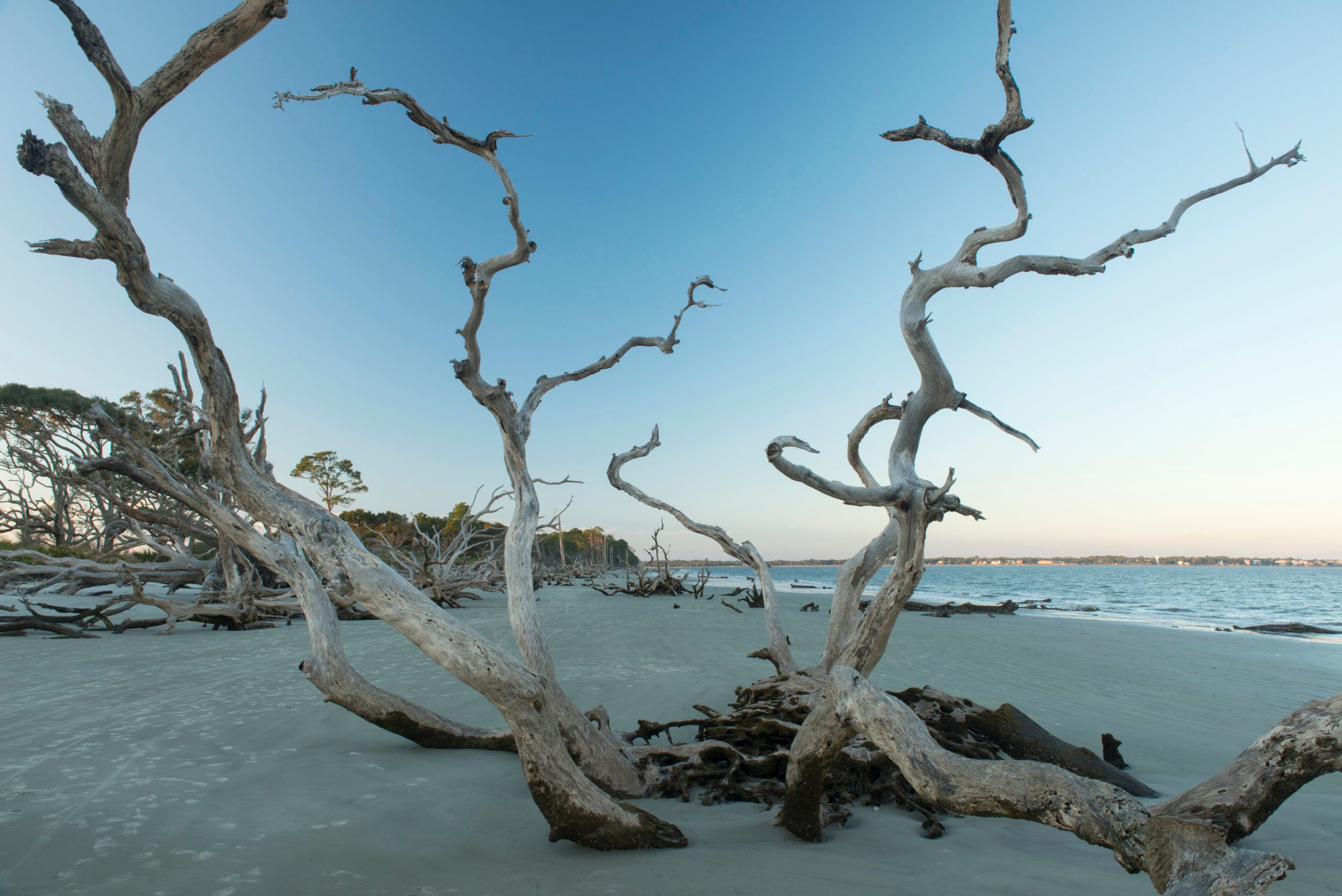 We’ve all seen driftwood wash up onto a beach, but the scene on Georgia’s Jekyll Island is something else entirely. Despite its name, this beach isn’t actually a repository for dead trees that have drifted over from other locales. Instead, the island itself once supported these trees while they were very much alive and over time, it eroded around them. What’s left are the ghostly remains of once-thriving stands of oak and pine trees. Take a look at the 50 best beaches in the world. 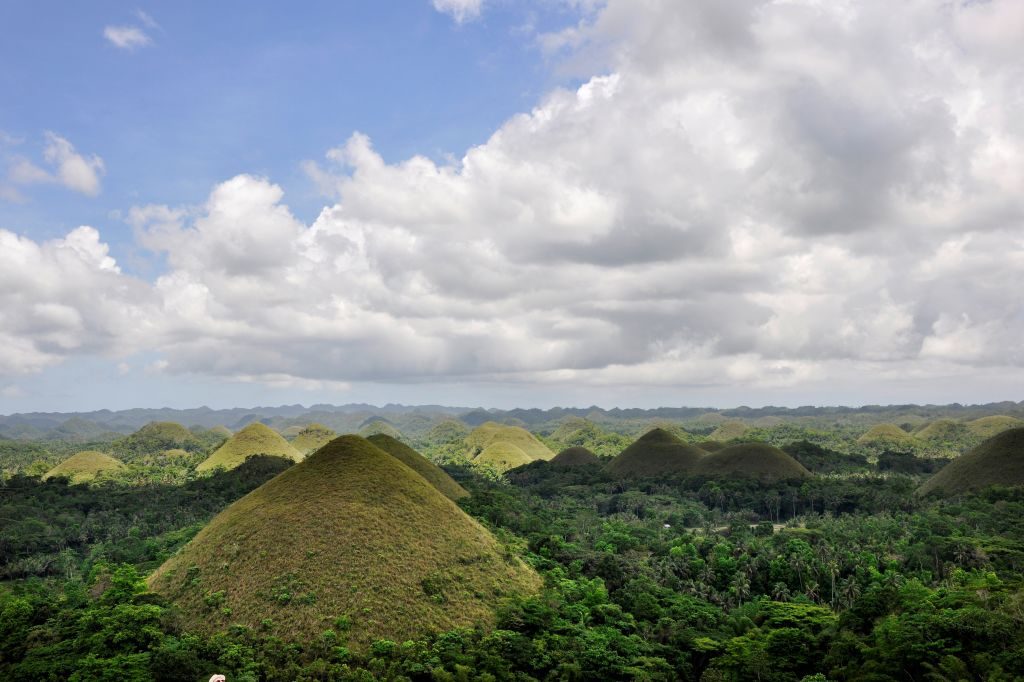 This “geological oddity,” as National Geographic calls this range of even mounds dotted across the Bohol Province in the Philippines, has lush vegetation that turns brown during summer die-off, which accounts for the name. But less evident is how they came to be, and how they managed to develop so symmetrically. Myths abound, of course, featuring weeping and warring giants. So do scientific theories, including one that posits that the 1,200+ mounds, averaging about 150 feet in height, were caused by eroding limestone stacked on clay. But the core mysteries of their shape, size, and appearance to date remains unsolved. 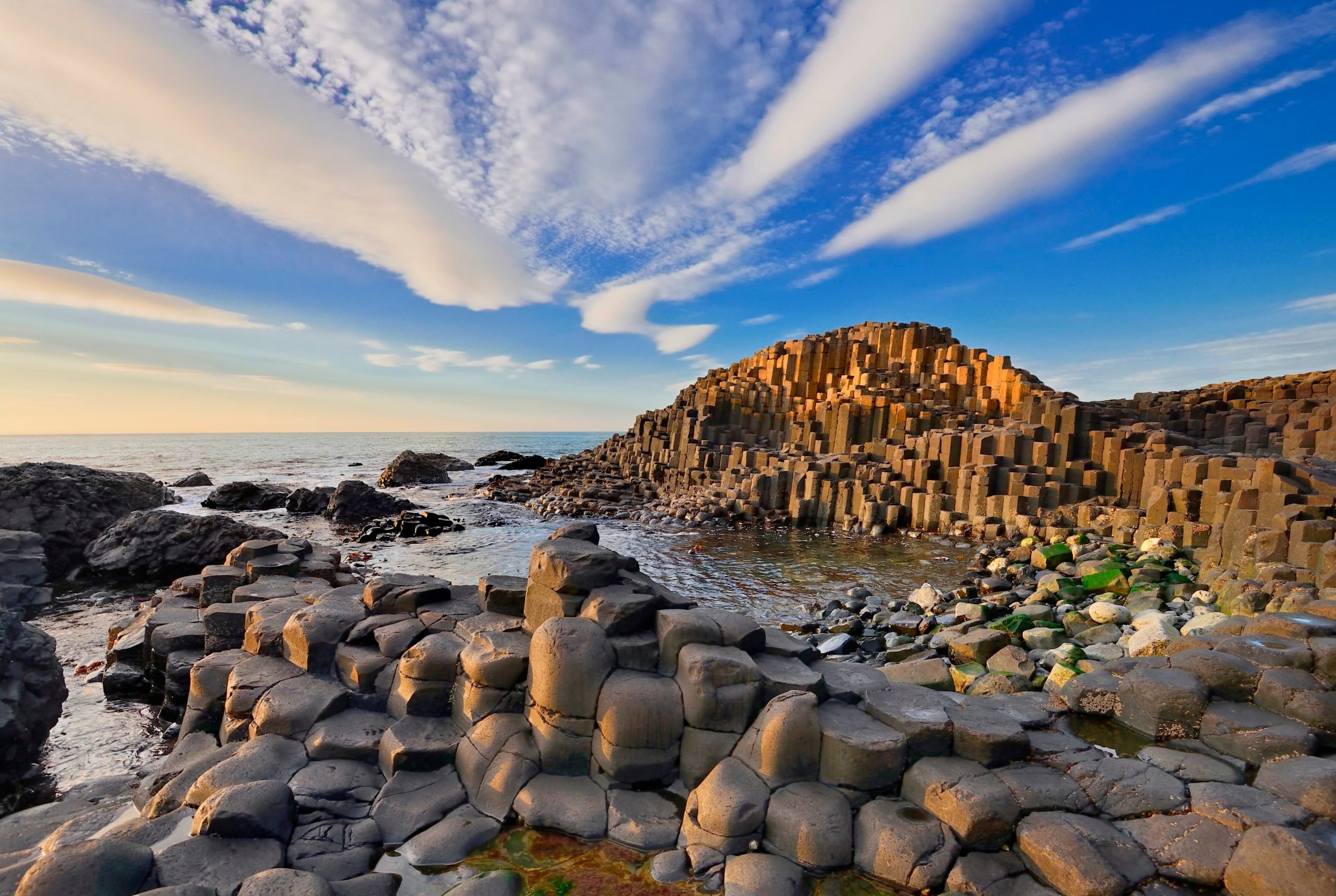 A giant is also in the legend of how this outcropping of volcanic rocks came to be formed on the coast of Northern Ireland, which magically appears as a path to help a mere mortal intent on protecting his homeland. In reality, though, this massive zigzag of 40,000 basalt columns at this Unesco World Heritage site is the result of an undersea volcanic eruption some 60 million years ago, which pushed lava up through the cold coastal waters, which cooled it and, with the erosion of thousands of years, eventually shaped them into these irregular “steps.” 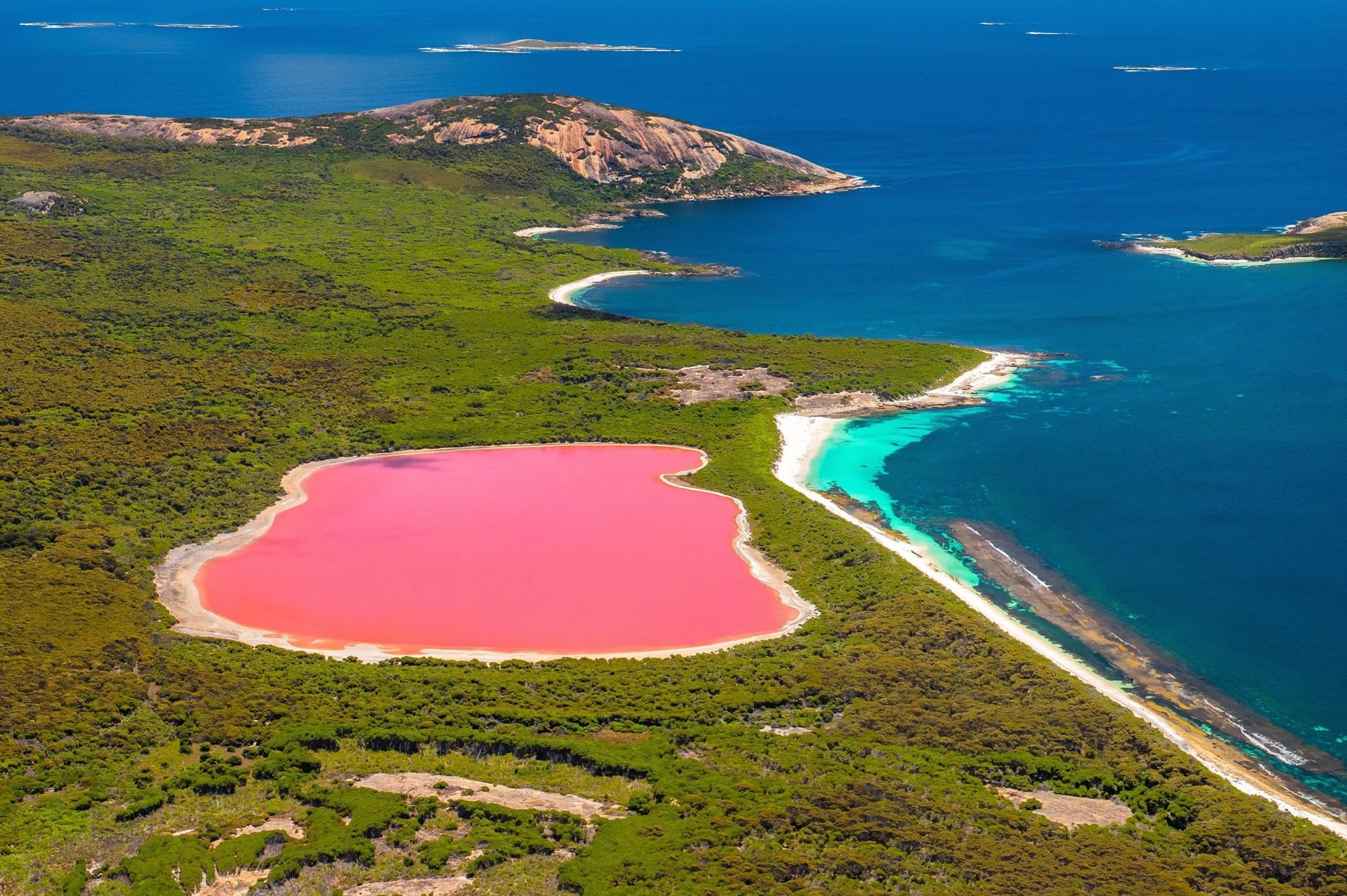 Australia’s noxiously pink Lake Hillier remains a true mystery of science. Beckoning from one of 105 islands that make up the Recherche Archipelago, the small, salty lake flouts the convention of other weirdly colored lakes around the world; namely, it looks pink no matter how close you get to it—even when it’s bottled; and it stays pink all the time. Why? No one knows for sure. Top theories are that the pink is the result of a reaction between the lake’s salt and its sodium bicarbonate deposits; and that bacteria or algae are contributing factors. Weird as it is, it’s not the only pink lake in the world. 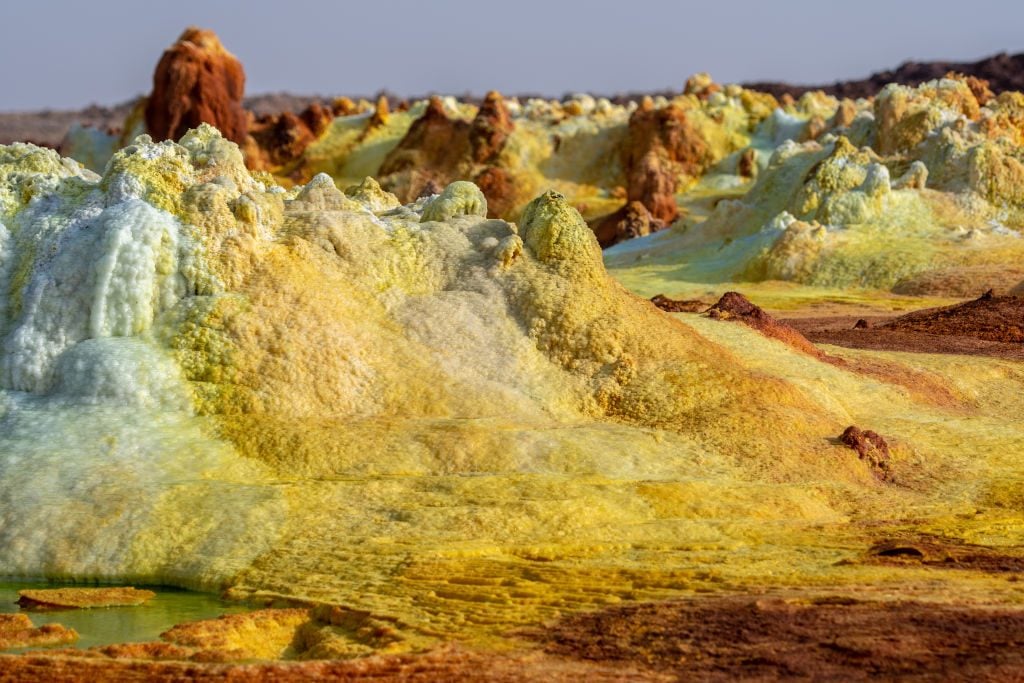 These hydrothermal hot springs at Ethiopia’s Afar Triangle—which may be the hottest place on Earth—produce some of the most eye-boggling color combinations occurring in nature. Filled with extremophiles—organisms that manage to live in extremely hot, cold, salty, or sugary environments, seemingly against all odds—the hot springs’ colors, despite their otherwordly appearance, are actually quite easily explained by science: groundwater that’s heated by magma dissolves salts and pushes them to the surface, where they dry into these fantastical apparitions. 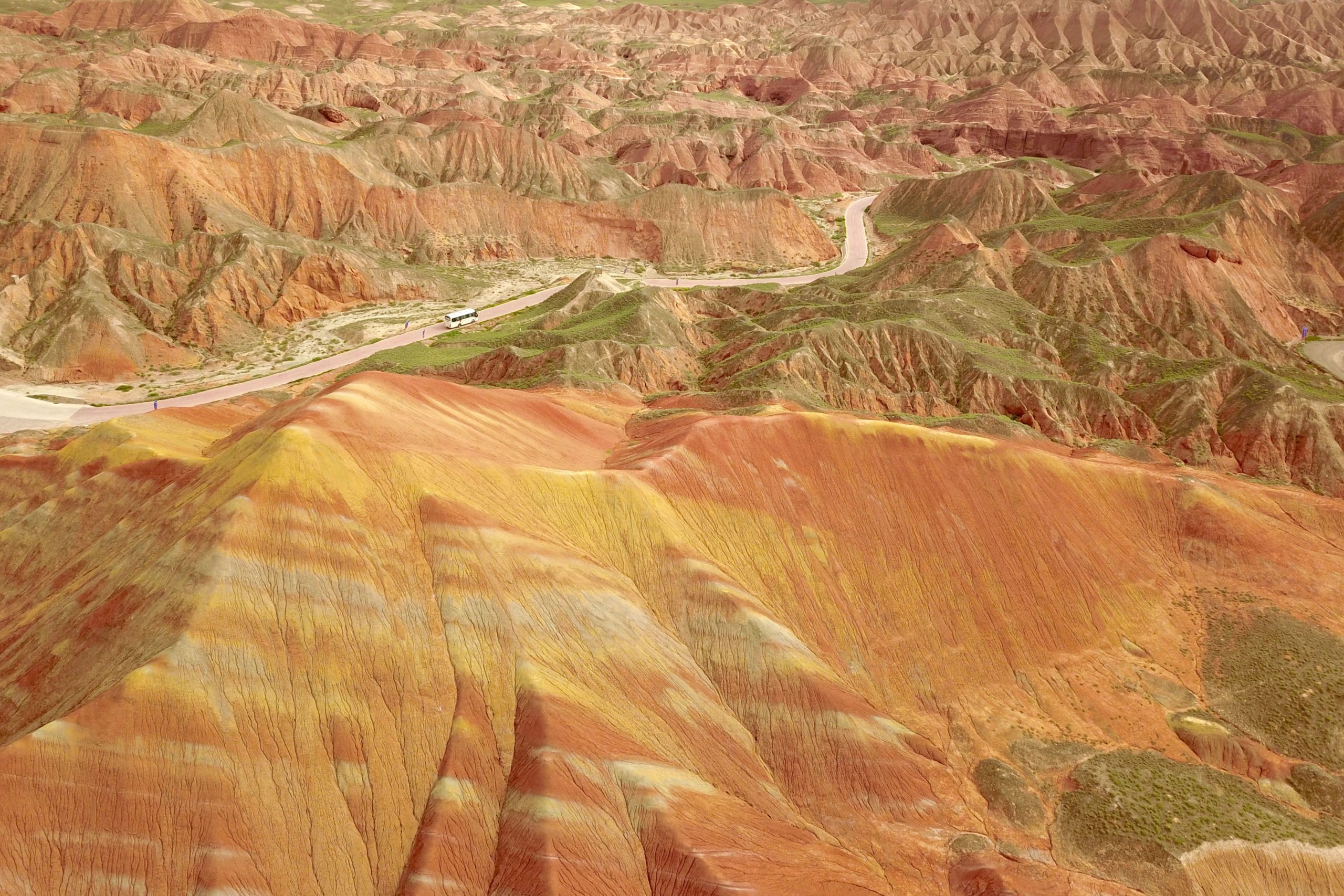 Almost as colorful are the rigid geological formations of the Zhangye Danxia Landform—sometimes referred to as the “Rainbow Mountains”—in China’s Gansu Province. Although they look almost impossible—referenced as appearing to be made from melted crayons, or emerging from the vivid brain of Dr. Seuss—again, basic science has a sensical explanation for the forms. They’re made of different layers of sandstone, containing different, and differently-colored, mineral deposits, which have shifted and eroded over time to reveal their stunning stripes. Speaking of Dr. Seuss, he looks like he could have conjured up some of these world’s most beautiful trees.