How about a round of applause for history?

When was the last time you responded to someone’s text with a thumbs-up or clapping emoji? Or maybe you crossed your fingers while waiting to hear back about that promotion? You might not think twice about why or how these common hand gestures came to be, yet we still use them in our everyday lives. Unsurprisingly, each of them has its own unique history—and some are darker than others. Learn the meaning of ten often-used hand signs, and then check out another 100 facts about practically everything. 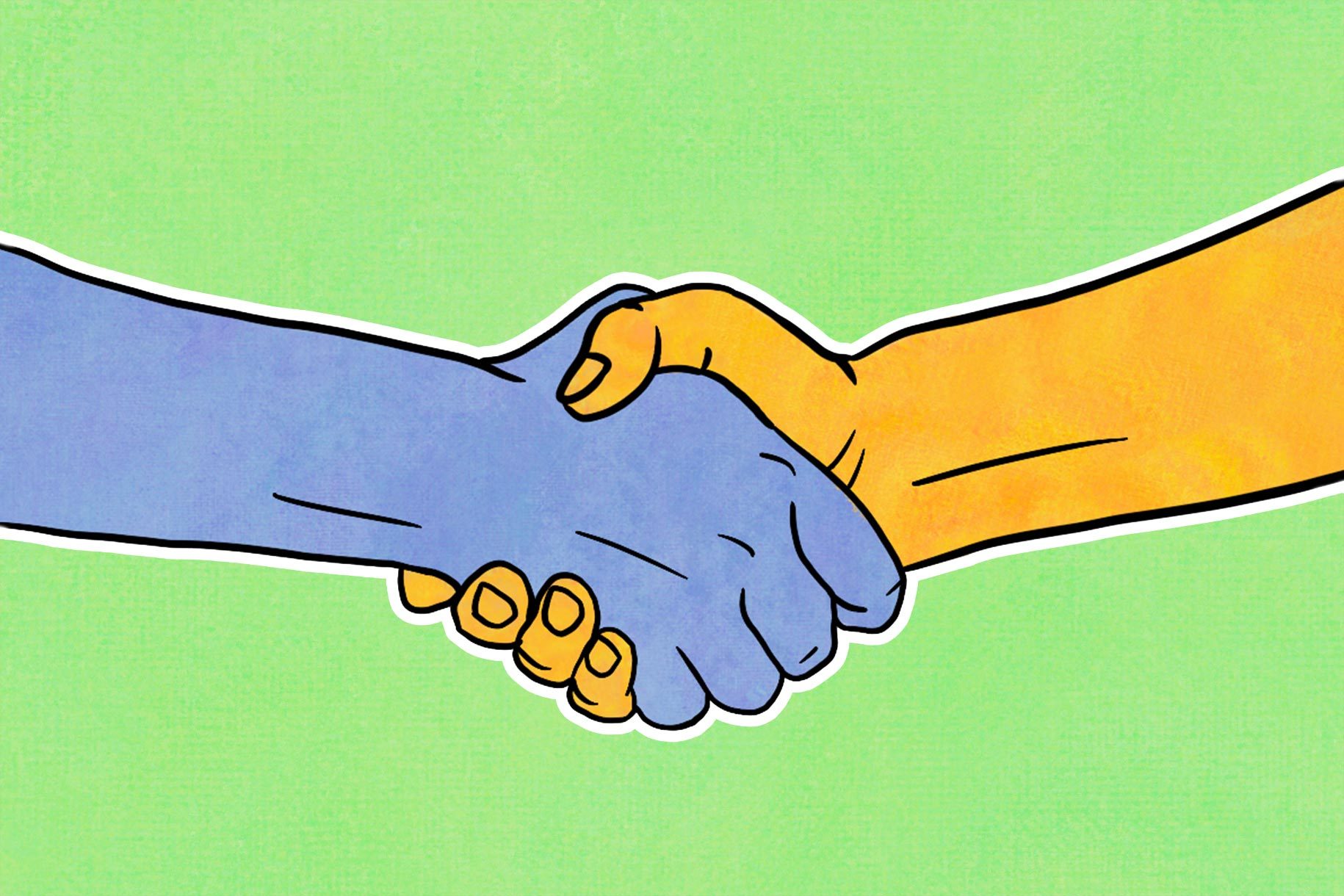 Let’s dial it back to the basics, starting with the good, ol’ handshake. Whether you’re greeting someone for the first time, closing a deal, or making amends, shaking hands is usually the go-to gesture. Handshakes are so important that some people often base their entire first impression of you on how firm, limp, rushed, or long yours is. But if you think about it, shaking hands is a little weird. Who decided on this customary gesture, anyway?

As it turns out, the handshake has been around for thousands of years—one of its earliest depictions in art is from the 9th century B.C., while Homer mentioned it in The Odyssey a century or two later—and there are a couple of theories about its origin, according to History.com. The first theory suggests that showing someone your empty, weapon-free palms conveys peaceful intentions, while the shaking motion would dislodge any weapons that might be hidden up a sleeve. The second theory has to do with the clasping motion when two hands meet, which symbolizes good faith and a sacred bond. 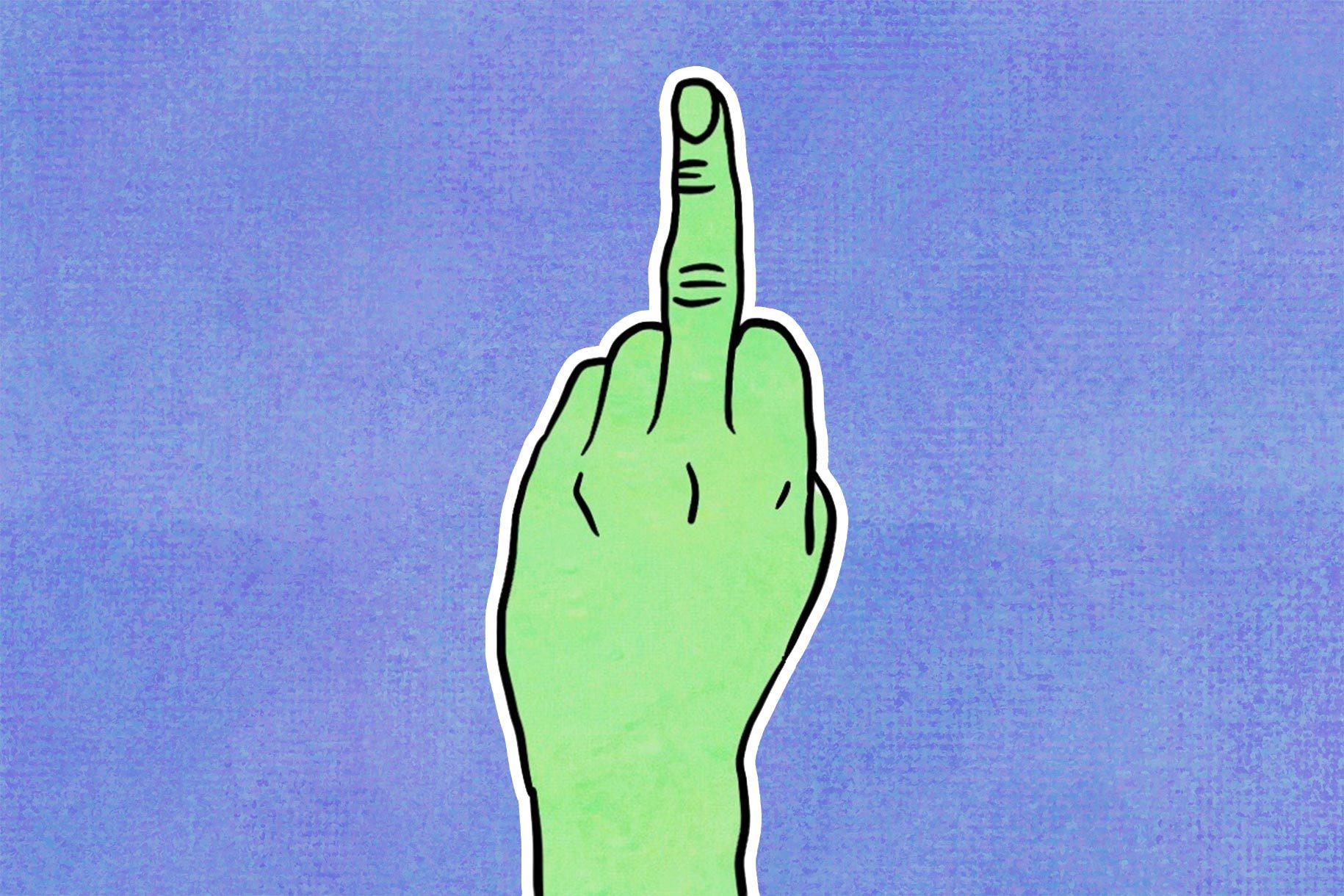 Ah, the middle finger. As one of the most, if not the most, offensive hand gestures, it’s no surprise that its origin is also vulgar. The hand sign’s meaning is actually phallic, and it’s believed to date back to ancient times, with the Greeks using it when referencing male genitalia and the Romans calling it the “digitus impudicus,” or the “shameless finger.” Its earliest documentation in the United States was in 1886, when a pitcher for the Boston Beaneaters “flipped the bird” in a photograph with the team’s rivals, the New York Giants. Speaking of rude hand gestures, here are ten that are OK to use in the United States but are pretty much equivalent to the middle finger if you’re abroad. 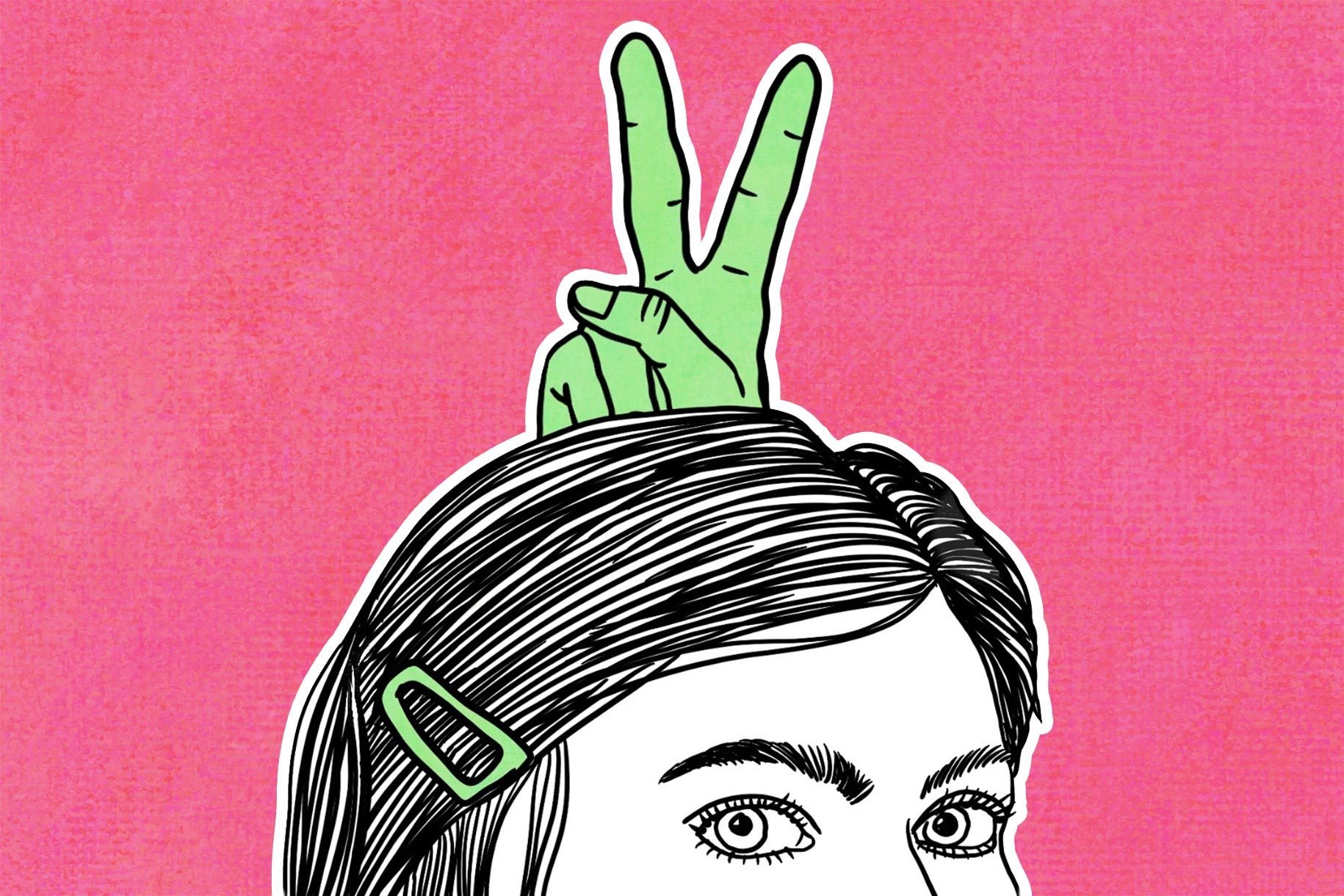 Putting two fingers up in the shape of a “V” behind your friend’s head to make them look like they have bunny ears makes for a great photobomb, but the cute hand gesture has a surprisingly dark origin. In the Middle Ages, the bunny ear gesture was referred to as “cuckold’s horns” and was used to shame a man whose wife was unfaithful; sometimes the shamed men were even forced to wear antlers on their heads. The hand sign’s meaning is also said to symbolize donkey ears, which was a common insult in Medieval times. (Think of another word for donkey to get the full impact of the insult.) Another weird gesture? Prince Harry’s frequent hand placement. Here’s what body language experts say about his odd quirk. 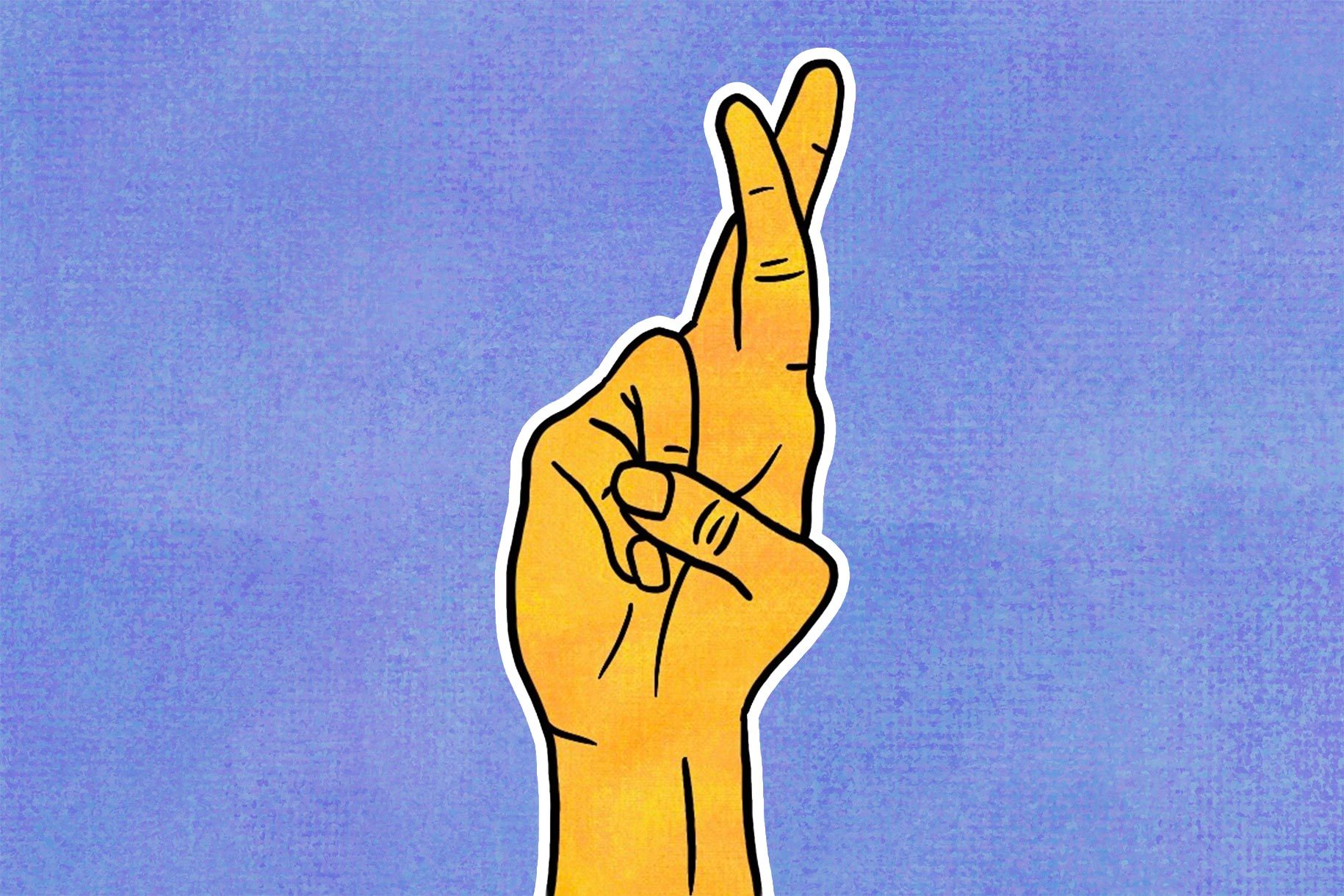 How many times have you crossed your fingers when hoping for something to happen? Or maybe you crossed them behind your back when making a promise? Either way, people have been doing this for centuries. The original gesture was an ancient pagan custom that required two people to cross fingers, notes the BBC. The idea was that the wishes would be kept safe at the point where their fingers crossed until they came true. Pagans weren’t the only ones to cross their fingers for good luck, though. Early Christians would often cross their fingers when faced with persecution to invoke the power of Christ’s crucifixion or to absolve themselves from sin. Some would also cross fingers with fellow Christians before Mass to form the symbol of the ichthus, or the sign of the fish. Also fascinating? The origins of these 14 commonly used phrases. 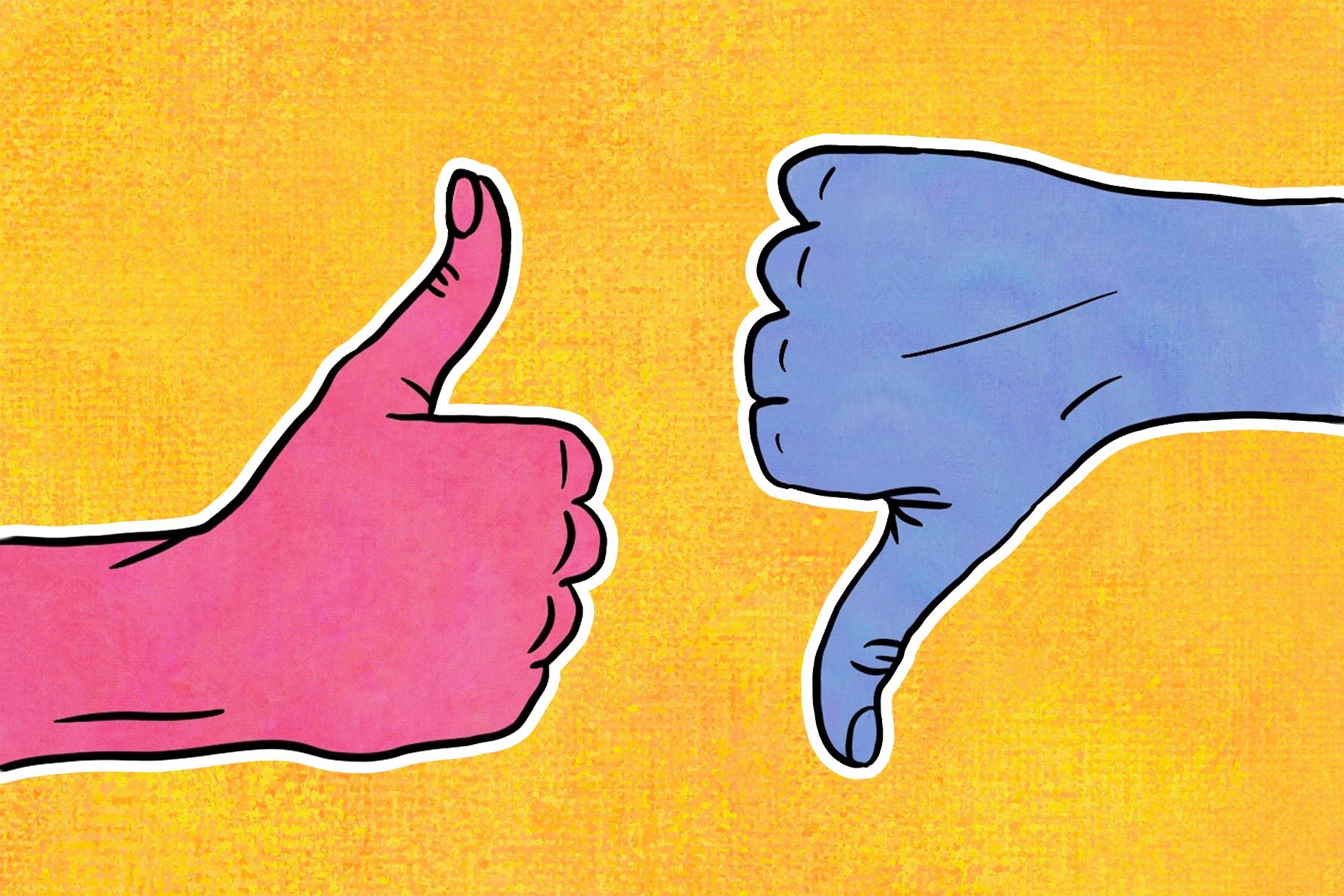 We’ve come to know and love the thumbs-up and thumbs-down emojis, but these hand gestures haven’t always been so innocent. As TIME reports, referees originally used the gestures in Ancient Rome to determine whether a gladiator should live or die—but thumbs-up meant death and pressing your thumb down on your fist meant life. Eventually, the gestures’ implications largely swapped meanings, which is why we now know thumbs-up to be positive and thumbs-down to be negative.

Some people also believe early pilots used the thumbs-up gesture to communicate with the person starting the propeller during pre-flight checks. However, the first recorded positive association with the thumbs-up gesture wasn’t until 1917, in a book titled Over the Top by Arthur Guy Empey. Empey was an American who served in the British Army during World War I and explained that U.K. soldiers used the phrase thumbs-up to indicate that everything was well. While tidbits like this are interesting, others are essential to our knowledge of the world, like these important facts that were left out of history. 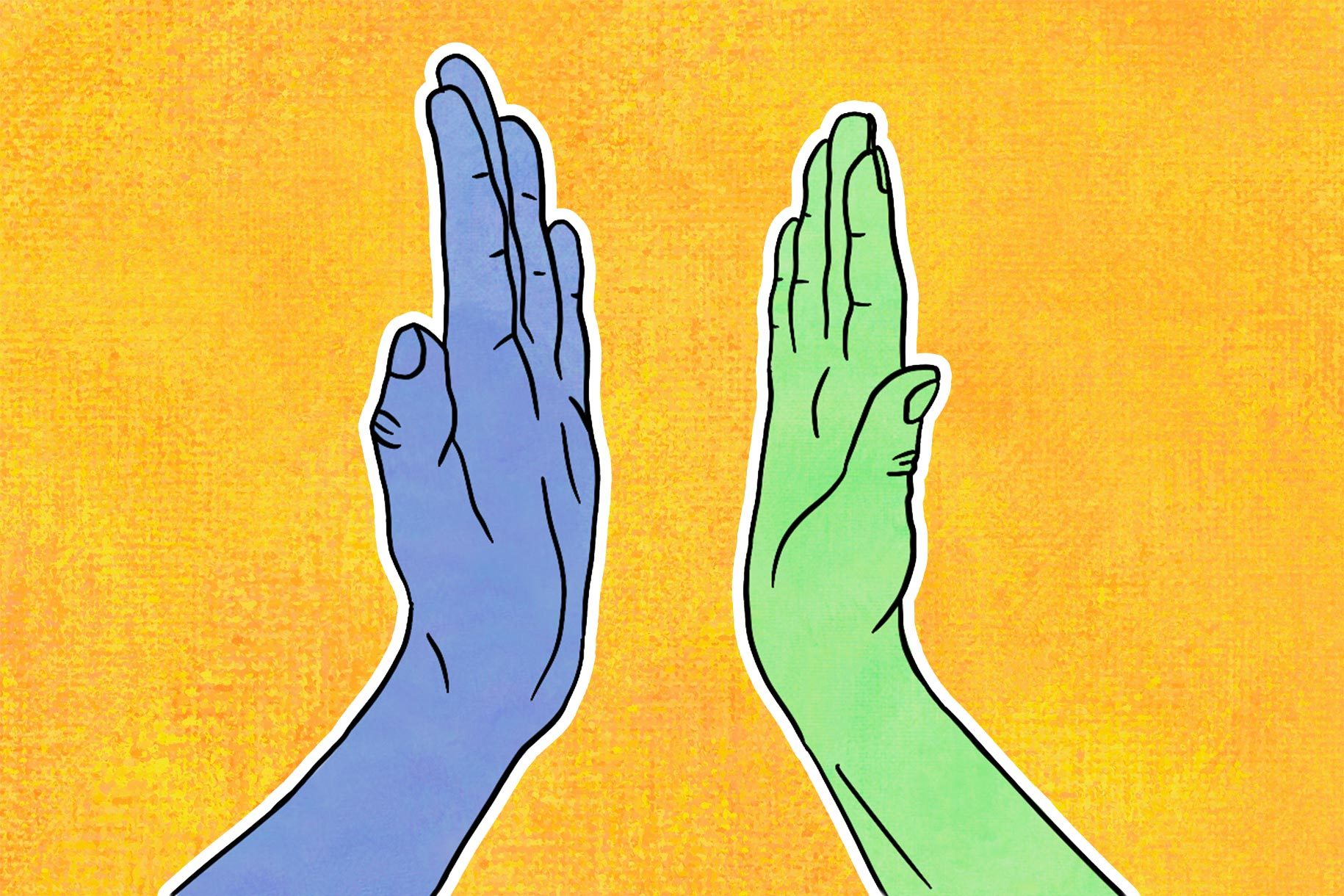 Whether you got a promotion at work, won a sports match, or scored an awesome discount while shopping, you’ve probably given or received a high five before. The gesture requires two people to reach up and slap each other’s palms in an act of celebration. Regardless of its popularity, no one really knows who to credit the gesture to—but we do know it’s likely the creation of an athlete in the late 1970s.

The first theory claims the high five was created on October 2, 1977, when Los Angeles Dodger Glenn Burke thrust his hand over his head to greet another Dodgers player, Dusty Baker, and Baker smacked it. “His hand was up in the air, and he was arching way back,” Baker told ESPN. “So I reached up and hit his hand. It seemed like the thing to do.” The second theory attributes the origin of the high five to Derek Smith, a University of Louisville basketball player who supposedly invented it at practice during the 1978–79 season. As the story goes, another player, Wiley Brown, tried to give Smith a low five, but Smith asked for one “up high” instead—and voilà, the high five was born. Do you know the origins of your favorite slang words? 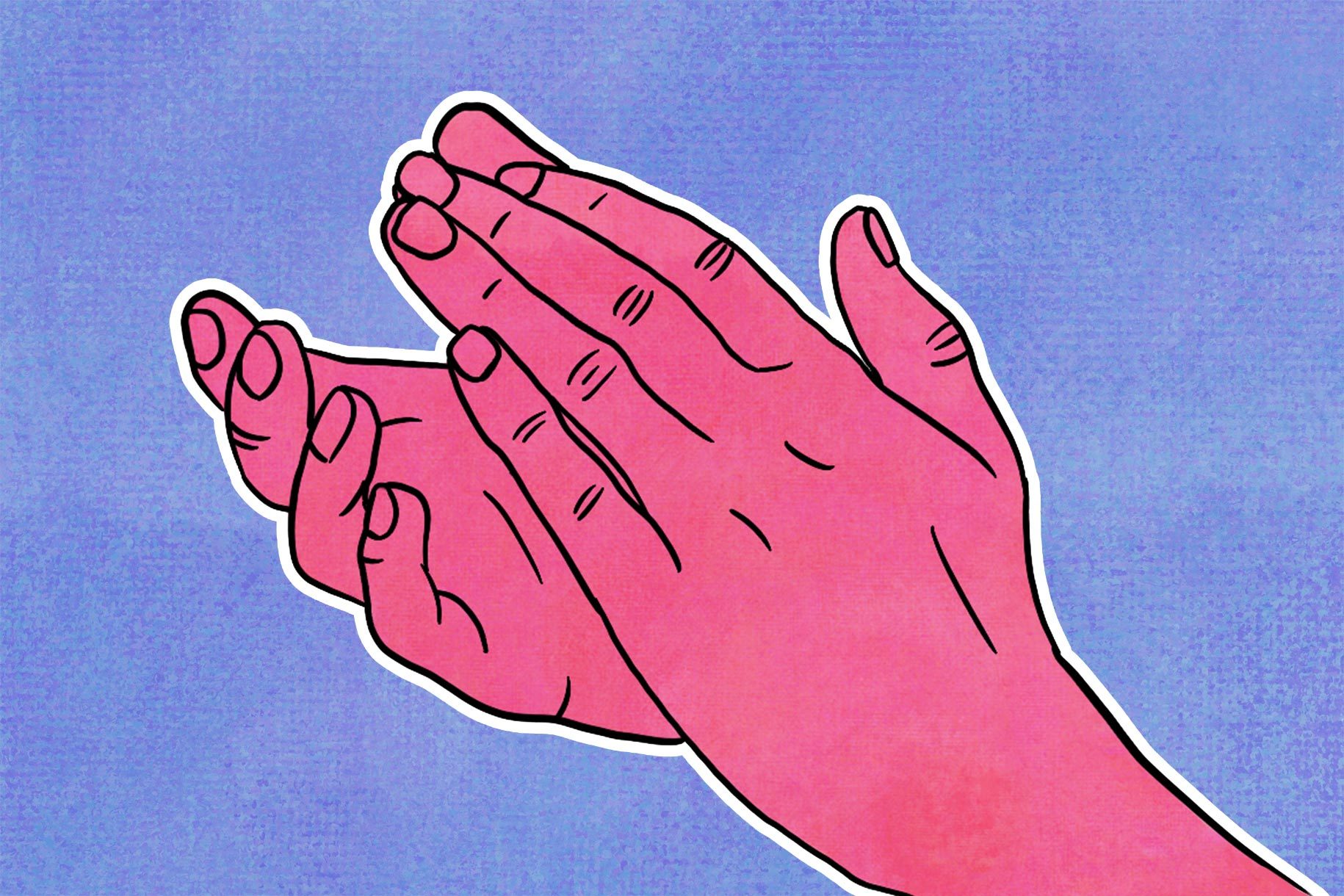 Clapping, of course, signifies approval or praise. Whether it’s clapping after a show, a speech, or a safe plane landing, it’s often considered rude not to do so. Although the exact origin of clapping isn’t known, applause dates back to ancient times—it’s even referenced in the Bible. In Western culture, its popularization is thought to have originated in the ancient Roman theater, according to the Atlantic. From there, applause made its way into politics, where Roman politicians gauged their popularity and approval based on how much applause they received when entering the arena. Applause was so highly respected that it was essentially used as a way to collect data and determine leadership value. While you’re expanding your knowledge, learn these historical facts that sound fake but aren’t. 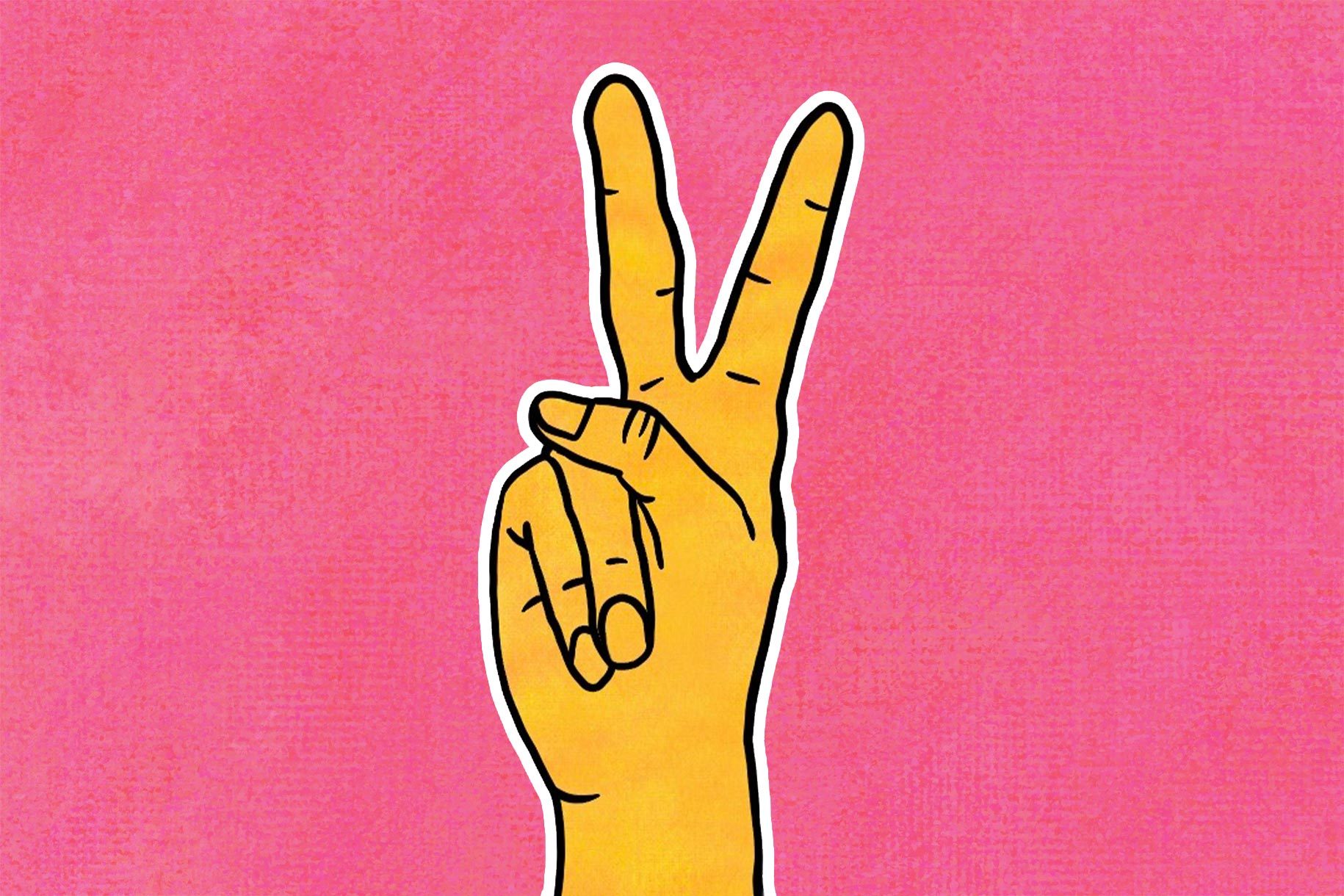 Holding up your index and middle finger to form a “V” sign can be a symbol of peace or an insult, depending on where you live. In the U.K., if your palm is facing yourself while you’re making the V sign, it’s equivalent to the middle finger in the United States. However, if your palm is facing outward, the hand sign’s meaning is simply the number two. Like most hand gestures, the V sign’s true origin is a bit murky. Some people believe it originated during the Battle of Agincourt, when the French would capture British archers and cut off their index and middle fingers so they couldn’t draw a bowstring. This story continues to be debated by historians and scholars.

What we do know, however, is how the V sign (with your palm facing outward) played a role in World War II: Many people, including Winston Churchill, often used it to signify “victory.” As the 1960s rolled around, the hand sign’s meaning also began to be known to signify “peace” by American and British youths, which was perhaps influenced by Churchill’s use of the gesture. On the other hand, the written peace symbol has a darker history than you might imagine. 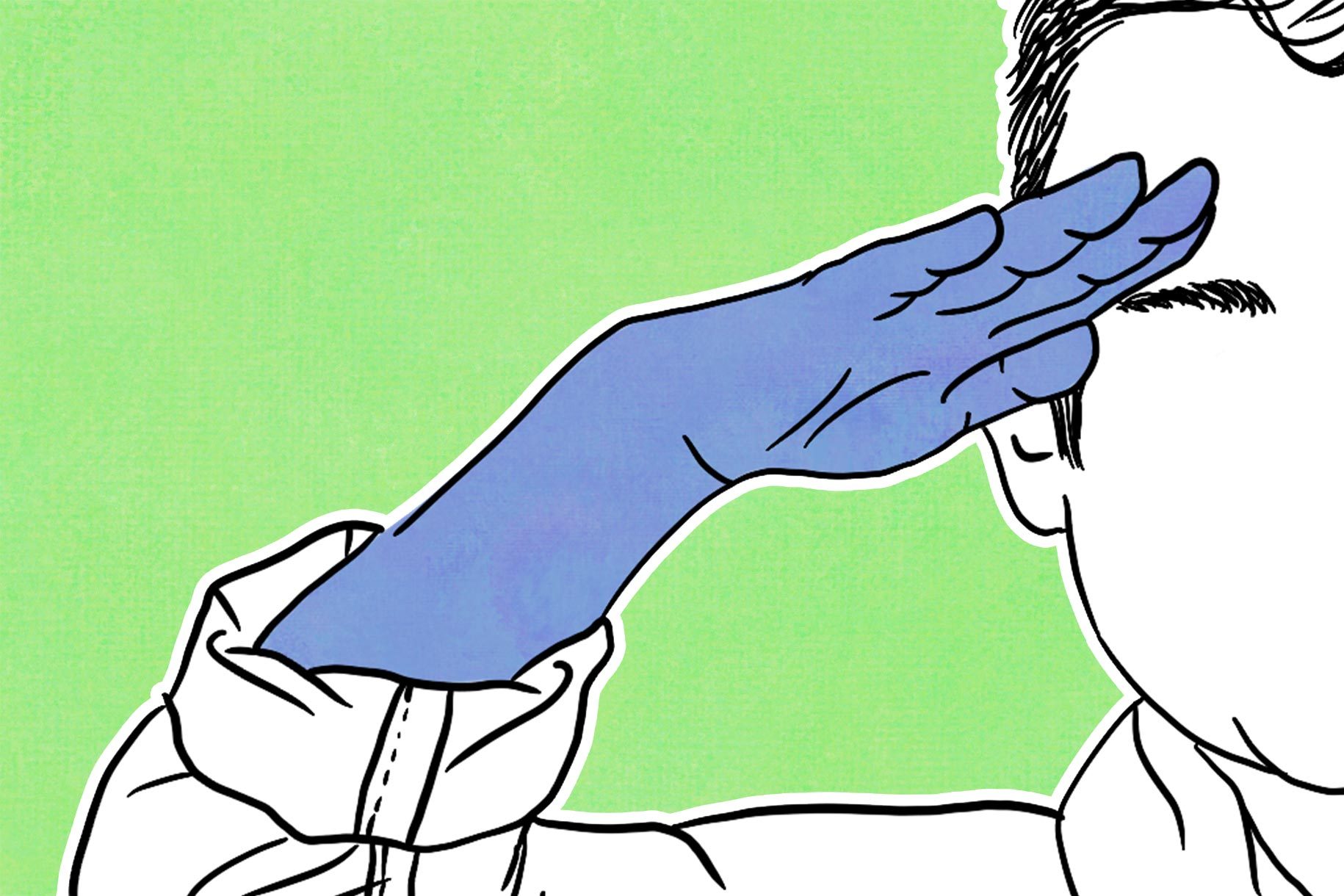 The salute gesture is the movement of raising your right hand to the brim of your head cover with your palm facing down. This hand sign is primarily used in the military and is a gesture of respect; it also informs others that you aren’t carrying any weapons. Some people believe its origins date back a few thousand years, when assassins were more prevalent in the military and government; the gesture was an effort to ensure no one had ill intentions. Another theory dates back to medieval times, when knights lifted their visors to show their identities to superiors. Saluting is also thought to be a replacement gesture to removing one’s hat out of respect. Regardless of what its true origin might be, today’s standard salute was an official military gesture by 1820 and is still rendered regularly by service members as a sign of respect. Check out these words and phrases you had no idea originated in the military. 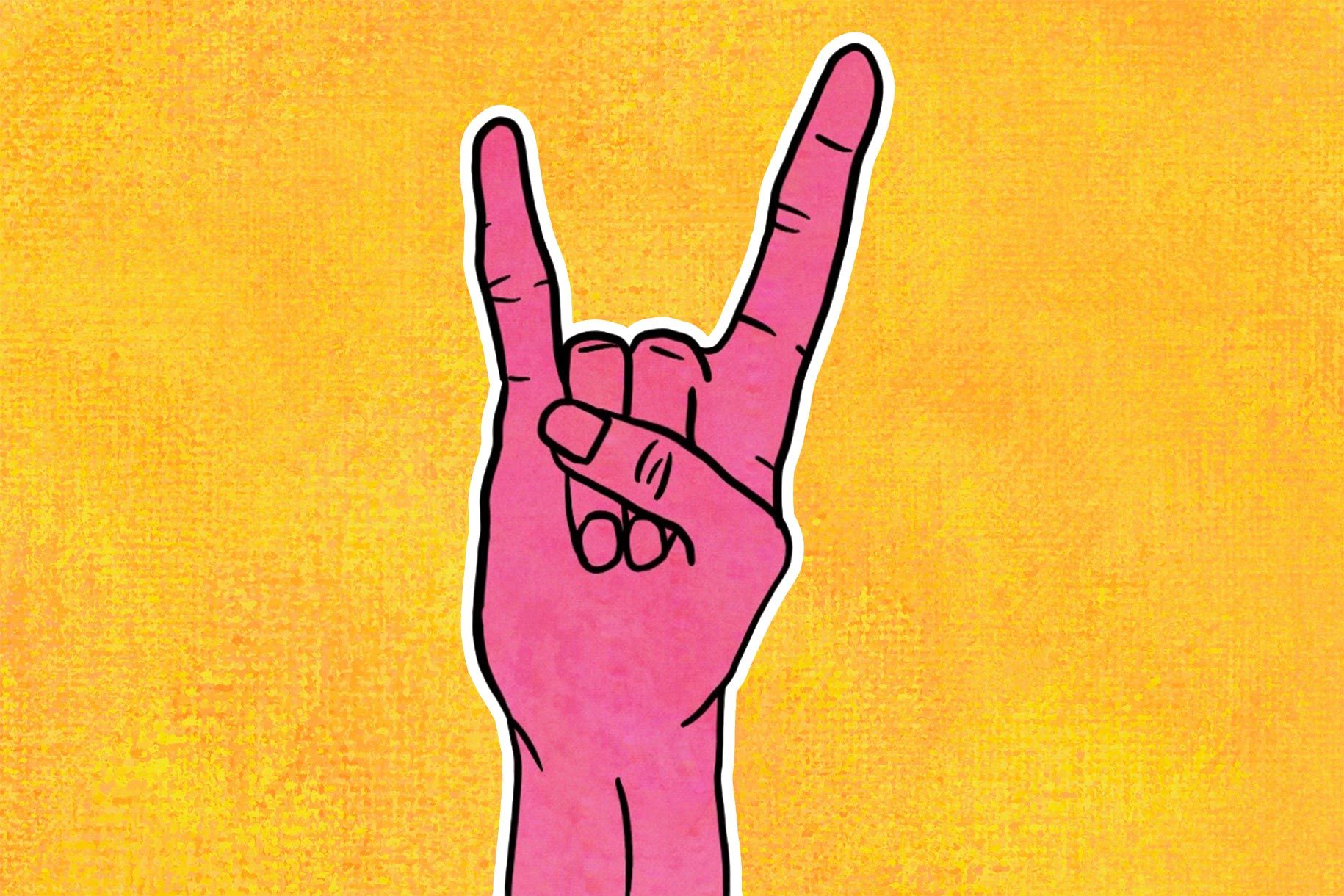 Before we jump into this one, it’s important to note that the sign of the horns gesture has a lot of possible origins. The hand gesture is made when you hold up your pinky and index finger and hold down your middle and ring fingers with your thumb. This isn’t to be confused with the “I love you” symbol in ASL, which requires the thumb to also be out.

The first potential origin is related to music. If you’ve ever been to a rock or metal concert, you’re probably familiar with this popular hand sign. Many people attribute the gesture’s popularization to Ronnie James Dio in the late 1970s…but he claims he wasn’t the one who invented it. Dio says his Italian grandmother inspired him to pick up on the “corna” gesture to ward off the “evil eye” and bad luck. It’s possible his grandmother might have been inspired by Bram Stoker’s 1897 novel Dracula, which mentions characters using the gesture to protect themselves from the evil eye. In other words, we know the sign has been around since at least the end of the 19th century, but its exact origin remains a mystery. Now that you know how these common hand signs got their start, don’t miss the bizarre origins of 11 everyday superstitions.

Brittany Gibson
Brittany Gibson is a regular contributor to RD.com’s culture, food, health, and travel sections. She was previously an editorial intern for RD.com and Westchester Magazine. Her articles have appeared on Buzzfeed, Business Insider, AOL, Yahoo, and MSN, among other sites. She earned a BA in English from the University of Connecticut.