15 Facts You Never Knew About Past Royal Weddings

Learn all the slip-ups and secret messages. 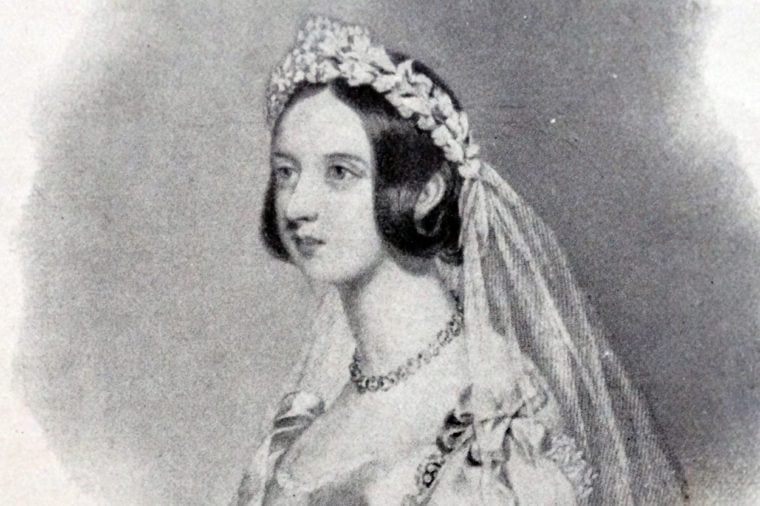 In the Victorian era, brides generally wore the nicest dress they could buy (and re-wear) in whatever color tickled their fancy. That all changed when Queen Victoria donned a white gown in 1840 when marrying Prince Albert. She chose white—then the color to wear to funerals, not weddings—mainly to match the lace on her dress, but it didn’t take long for brides to follow her lead, citing the hue as a sign of purity. Get a look at the trend she started with these iconic royal wedding photos from throughout history. 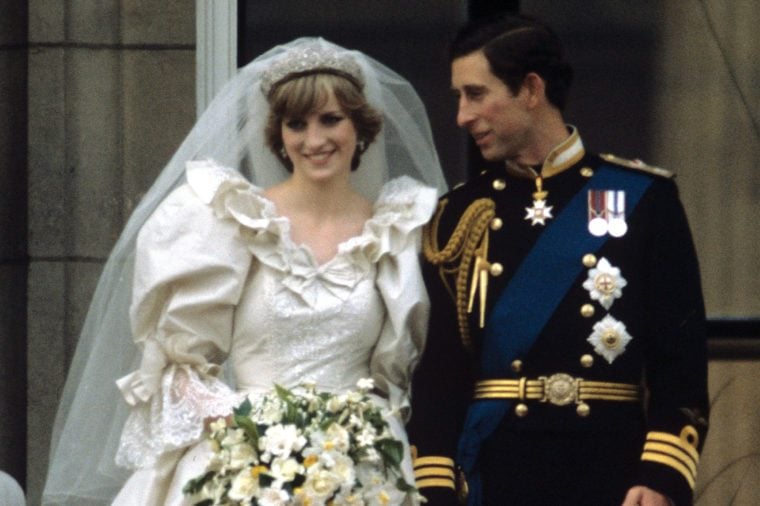 Diana said the wrong name during her vows

Luckily, the slip wasn’t overly awkward. Instead of calling her groom “Charles Philip Arthur George,” Diana swapped the names as “Philip Charles.” She wasn’t the only one suffering from wedding jitters, though—Charles said “thy goods” in his vows instead of “my worldly goods.” Don’t miss these other 15 secrets you never knew about Charles and Diana’s wedding. 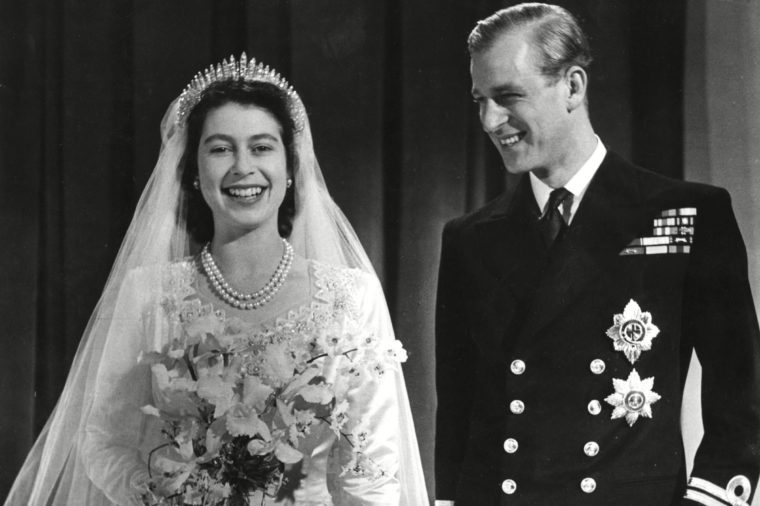 Queen Elizabeth used ration coupons to pay for her dress

After World War II, even then-Princess Elizabeth wasn’t exempt from being limited to clothing rations. Hundreds from the British public tried sending her their own cards to supplement the 200 coupons she’d been granted, but the palace returned each one because transferring them was illegal. 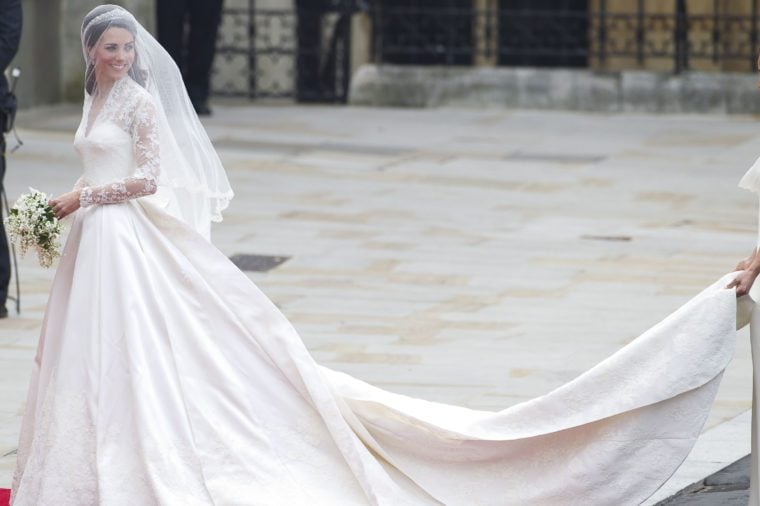 After William kissed his bride, Kate Middleton ditched the nine-foot train and slipped on another white gown. Check out what that second wedding dress looked like. 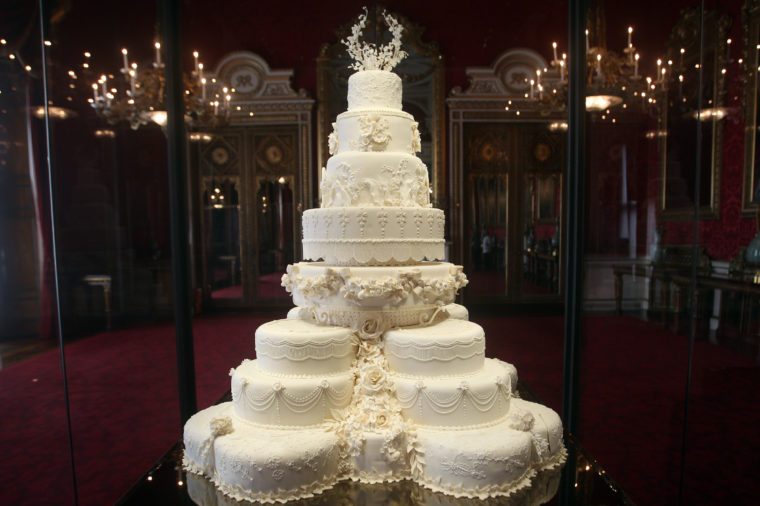 They’ve all served the same type of cake

Every British royal wedding since Queen Victoria’s 1840 ceremony has served fruitcake. Find out what the uncommon cake choice represents. 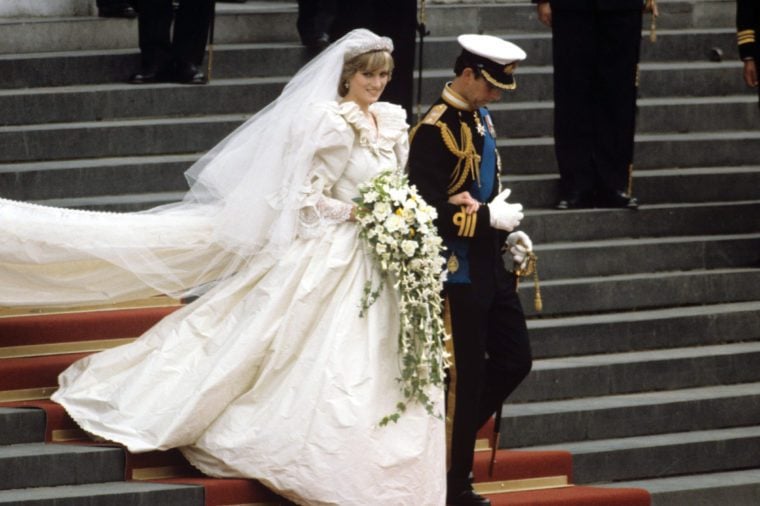 Diana had a stain emergency

On her way to the ceremony, Diana reportedly spilled perfume all over her gown while trying to dab it on her wrists. Her quick-thinking makeup artist showed her how to hold the dress up to cover the stain, keeping onlookers none the wiser. Find out which perfumes Elizabeth, Diana, and Kate wore on their wedding days. 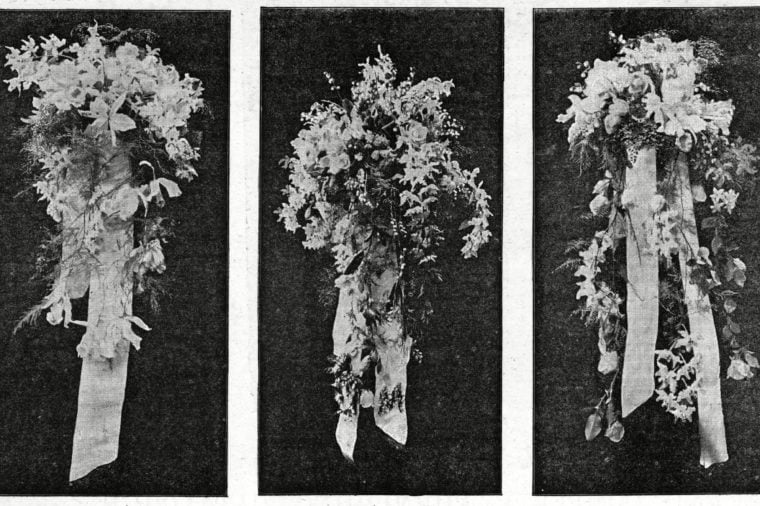 Royal brides have one bouquet in common

In 1840, Queen Victoria’s bouquet included a sprig of myrtle, symbolizing love and fertility. Since then, every royal bride has kept a sprig of the flower sourced from this special place. 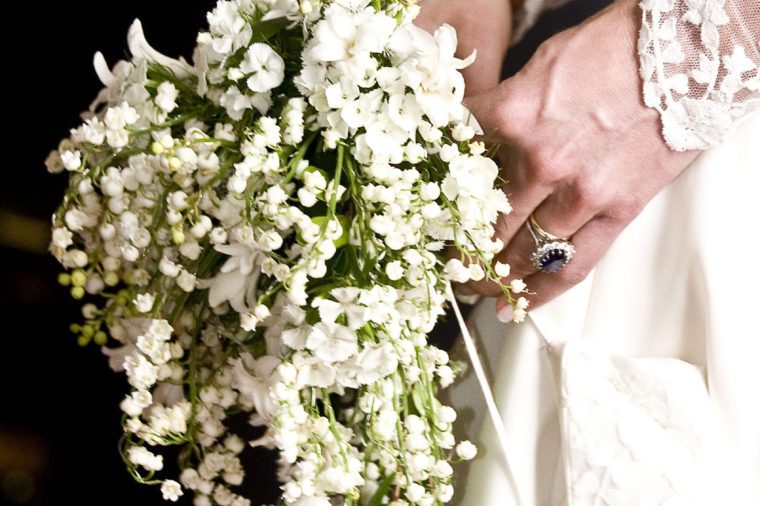 Kate’s bouquet was a nod to her groom

In addition to the myrtle (plus lily of the valley and hyacinth), the Duchess of Cambridge’s bouquet included a bloom with a touching sentiment: sweet William. 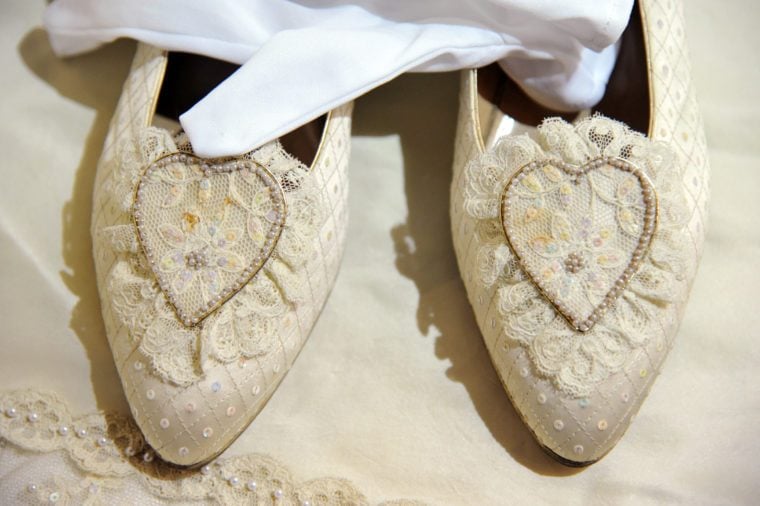 She had the letters C and D (for Charles and Diana) with a heart hidden on them. Find out where you could see the shoes’ sweet tribute. 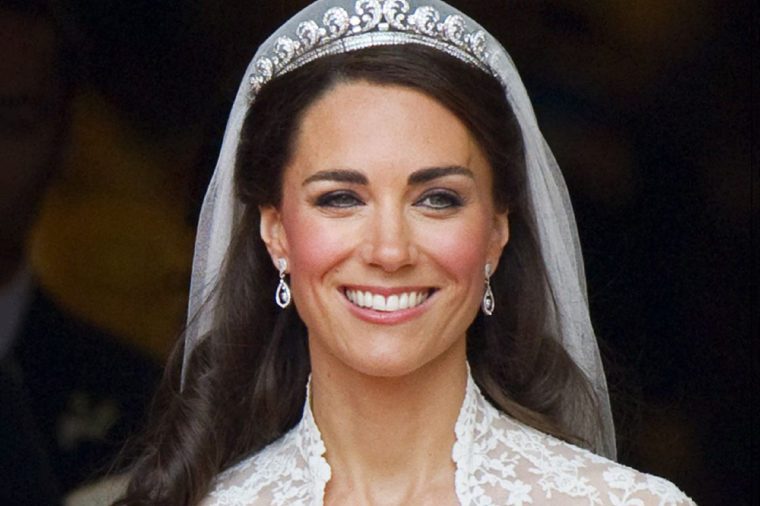 Kate Middleton did her own makeup

Leading up to the big day, she was rumored to have taken lessons from makeup artist Arabella Preston. Here’s what nail polish the Duchess wore for the wedding. 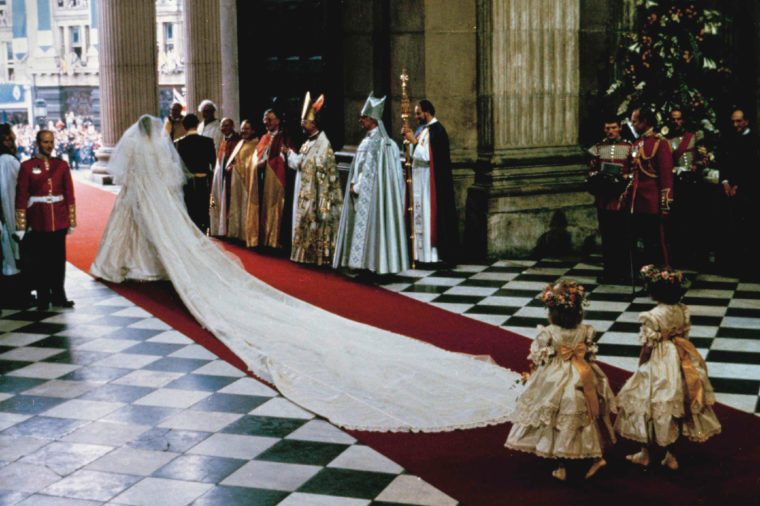 Diana had the longest train in royal history

While Kate’s train was impressive, it couldn’t hold a candle to Diana’s 25-foot train—or the veil, which was even longer. Like Diana, the royal family values honesty. But sometimes they can be brutally honest. 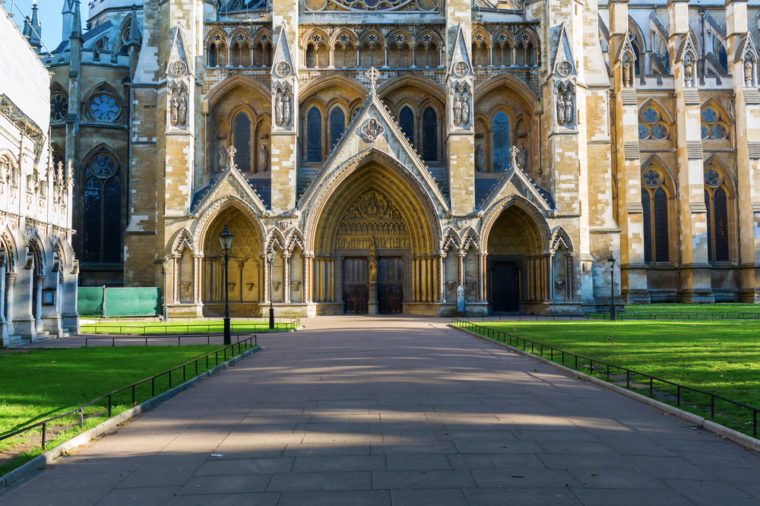 King Henry I’s marriage to Princess Matilda of Scotland in 1100 was the first royal wedding to take place there—and William and Kate kept the tradition going 911 years later. Check out these etiquette rules the royal family needs to follow at weddings. 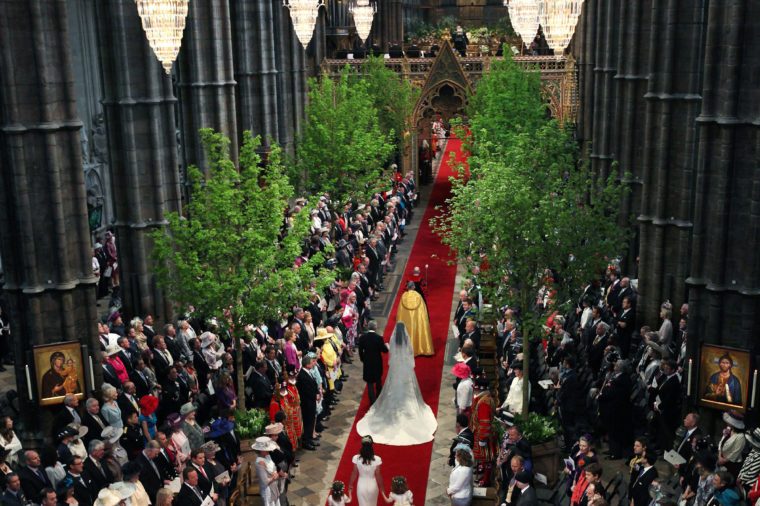 The six field maple trees, which stood up to 25 feet tall, that lined the aisles of Westminster Abbey were replanted in Prince Charles’ vacation home in Wales. Learn the surprising rule Kate Middleton has to follow at Prince Harry and Meghan Markle’s wedding. 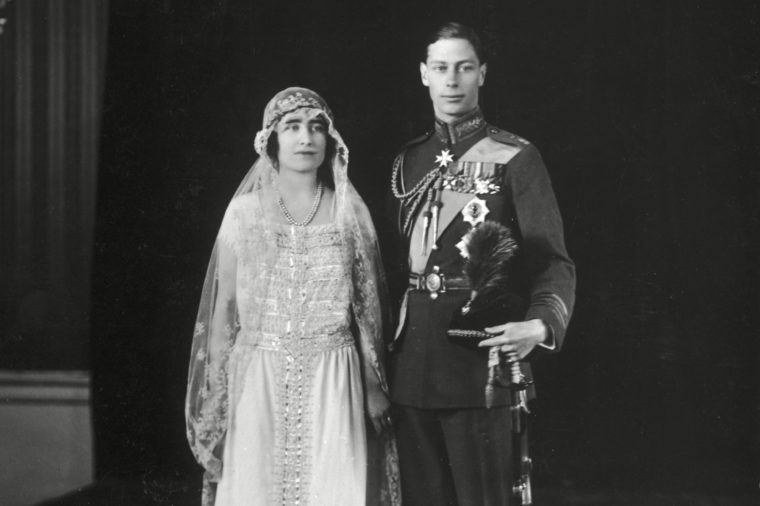 Radio was all the rage in 1923, when he married Elizabeth Bowes-Lyon, but there was no broadcast because the Archbishop of Canterbury didn’t want it played in pubs. 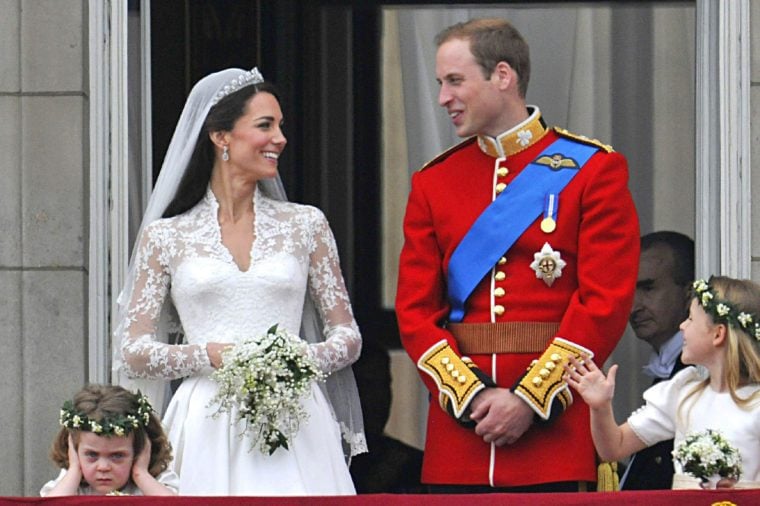 They cost tens of millions of dollars

In 2011, William and Kate spent an estimated $32 million on their nuptials, most of which went toward security costs. If that weren’t staggering enough, Charles and Diana spent close to $70 million in today’s dollars for their 1981 ceremony. They aren’t always so lavish, though; don’t miss these 15 surprisingly frugal habits of the royal family.