The iconic children's show is turning 50! And while you likely watched it as a child or with your own kids, this is what you didn't get to see.

It’s hard to imagine a world without Sesame Street, but it’s equally hard to believe that the beloved children’s show is turning 50 this year! TV shows sometimes have the power to change the world, and Sesame Street has definitely done that. To honor its lasting impact, a special anniversary celebration will air on HBO on November 7th and will be rebroadcast on PBS on November 17th. And even though the most die-hard fans may think they know everything there is to know about Big Bird and company, trust us—they don’t. We got the behind-the-scenes scoop on America’s longest-running children’s show from Sesame Street‘s current executive producer, Ben Lehmann, and former cast member Emilio Delgado, who played Luis for a whopping 44 years. Here’s what they had to say about the sunniest street in America.

Experimental psychologist Lloyd Morrisett was studying the educational trends associated with low-income and minority children in the late 1960s when he was introduced to public television producer Joan Ganz Cooney at a dinner party. He expressed the idea that television could be an important teaching tool for preschool-age children. Cooney agreed, and together they workshopped the idea that would become Sesame Street. “Today, you wouldn’t think of having a children’s show without it being educational,” says Lehmann. “That’s because of Sesame Street.” The Sesame Workshop continues the mission of educating children globally by assessing their needs through research and implementation. Teaching and inspiring children are at the heart of the show. Here are 10 “dream big” quotes that will motivate anyone, no matter how old they are.

They make it look easy, but it isn’t. In fact, it takes hundreds of employees to bring Elmo, Grover, Abby, and the crew to life. The creators of the beloved puppet characters work long hours to give personality to each puppet. From the careful selection of the character’s eyes to the way the puppeteers create their voice, it’s a methodical, conscious process. “It surprises people to learn that it takes a full day to get ten minutes of footage,” says Lehmann. “We function somewhat like a symphony orchestra. It’s really quite an intricate dance between the camera operators, the puppeteers, and the actors.” Of course, it’s always important to build trust with your coworkers, but it’s essential to keep this show running smoothly.

Sesame Street has always been a rainbow of inclusion

Inclusion, representation, and diversity are trendy buzzwords these days, but they’ve been at the center of Sesame Street all along. While the concepts may have changed and expanded over the years, Morrisett and Cooney originally set out to create a show that would allow minority children to feel seen. The early casting of the show was deliberately inclusive. Aside from Delgado, cast members Matt Robinson, Loretta Long, Sonia Manzano, Bob McGrath, and Will Lee played neighbors from different backgrounds who functioned like a family.

Manzano, who played Maria, was the first leading Latina actor to be cast in a television series, and Delgado played her husband. He recalls his early career as a young Chicano actor in L.A. and remembers a time when Latinos were often cast as racist stereotypes. Sesame Street was looking for something very different. Delgado says that people still tell him how much his character, Luis, meant to them: “They’ll say to me, ‘We were the only Mexican family in my town, and you looked and sounded like me!’ It means so much to hear that.” Here are some other trailblazing Hispanic Americans who made history.

So controversial, it was once banned

Because Sesame Street was so progressive and ahead of its time, it occasionally found itself at the center of controversy. Those who opposed integration were threatened by the show’s casting and the appearance of certain celebrities, like civil rights leader Jesse Jackson. And in 1970, the show was banned from airing in Mississippi by the State Commission for Educational Television on racial grounds. Of course, Sesame Street stood its ground, and Lehmann says this has been a consistent theme of the show. “The aim of the show has always been to show kids someone like them and give tools to their caregivers to help them succeed,” he explains. Of course, TV shows aren’t the only type of entertainment to court controversy. Here are 13 of the most controversial books of all time. 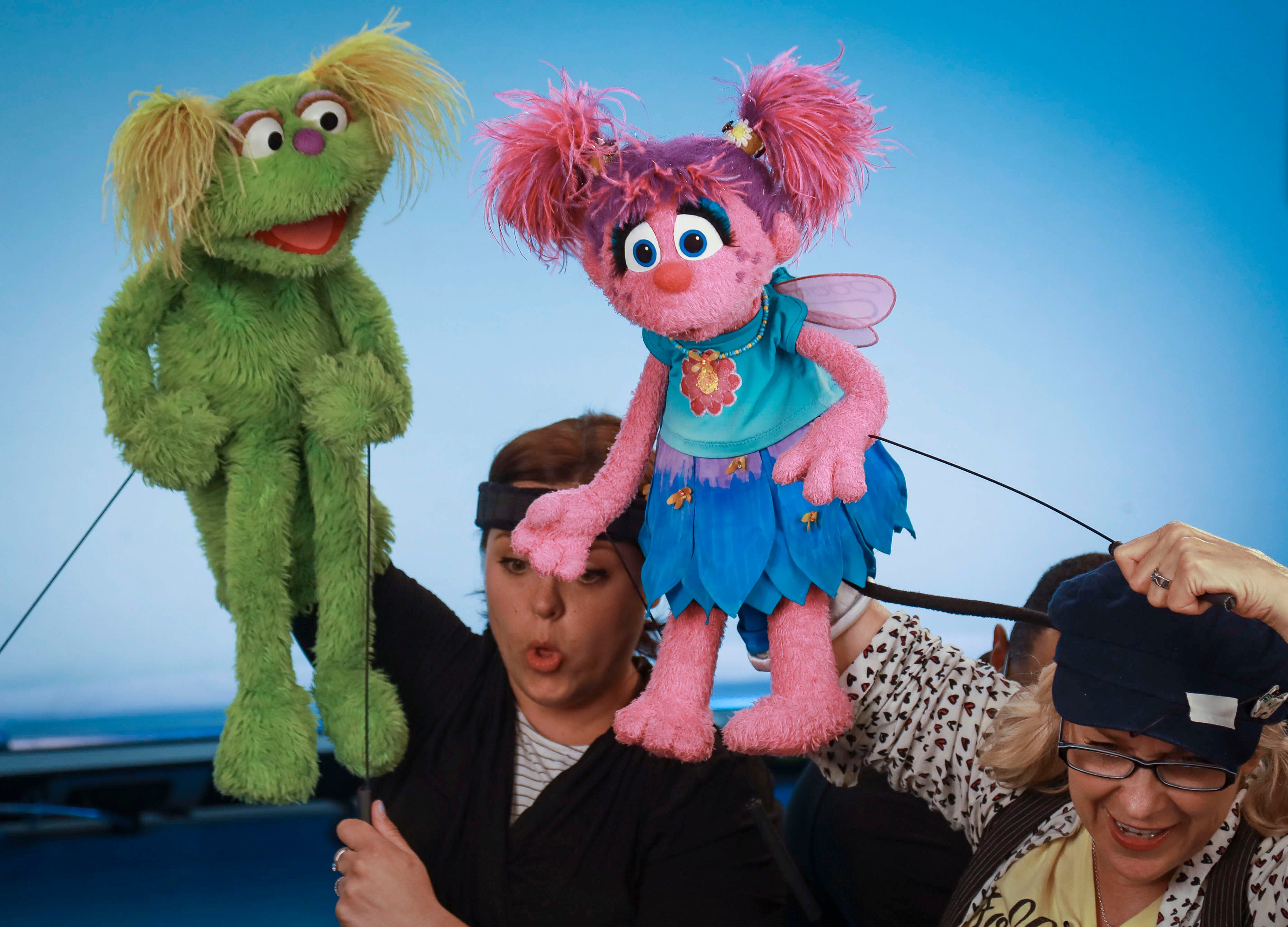 The toughest job on Sesame Street

It’s not being an actor. That was easy from the start, according to Delgado, because the puppeteers are so talented. “My imagination was nurtured,” he says. “It’s easy to have a total suspension of disbelief because of the talents of the puppeteers.” But that doesn’t mean the puppeteers have an easy job—it takes a lot of skill to operate those puppets. Often, characters are operated by one or two people, working closely to make the puppet move, talk, gesture, and make facial expressions that are as human-like as possible. Having a job on Sesame Street is pretty cool, even though it may also be a little quirky…though probably not as quirky as the strangest jobs in every state.

Can you tell me how to get to Sesame Street?

Yes, actually! Sesame Street was originally set on an imaginary street in New York City—but it’s no longer imaginary. On May 1, 2019, the intersection of 63rd and Broadway was renamed Sesame Street, and Mayor Bill de Blasio declared it Sesame Street Day to honor the show’s 50-year run. But while you can find Sesame Street in Manhattan, the actual show is filmed in the outer borough of Queens, at Kaufman Astoria Studios. Here are 65 TV and movie filming locations you can actually visit.

Celebrities love to pop by

When asked about favorite celebrity guests, Lehmann has a hard time choosing just one. “Jamie Foxx did this super funny thing with a fox, and Terry Crews had so much great energy,” he says. And while he’s partial to Elvis Costello’s appearance since he’s a big fan, he’ll never forget John Legend’s moment with his three-year-old-daughter, Luna, as she saw him interact with puppets. The show has hosted a variety of high-profile celebrities over the years, including former First Lady Michelle Obama, Sir Ian McKellen, and Maya Angelou. For another trip down memory lane, check out these 46 memorable TV and movie quotes.

The moment with the biggest impact was real

Both Lehmann and Delgado agree that the most impactful moment of Sesame Street was the death of Mr. Hooper, played by Michael Lee, in 1982. The show dealt with the character’s death while the cast and crew were dealing with the death of their friend and coworker. The result was a touching and honest explanation of death to children everywhere (and Big Bird) in an emotional moment that took only one take. “To talk to kids about death had never been done,” says Delgado. “We all felt the intensity of that emotion. We kept acting as we were feeling.”

In terms of impact, Delgado says a close second was the marriage of Maria and Luis in 1988. “That episode showed the cultural context of Latino life,” he explains. “It showed a whole family and a whole community behind these two people in love.” For more groundbreaking cultural moments, read about these 13 Hispanic women who changed the world.

Why the puppets are city kids

Since the creators wanted to speak to low-income and minority communities, they needed to create characters who fit the bill—as well as a setting those children could relate to. That’s why the show’s backdrop consists of clothes hanging out to dry, street vendors, stacked tenements, and an urban landscape. The education gap is still prevalent for many in the United States and can vary from city to city. These are the most and least educated cities in America.

A lot of thought and planning goes into every episode, character, and topic. The Sesame Workshop is a non-profit organization that works to create the curriculum for the show. And Sesame Street‘s newest character, Julia, was carefully created with the help of researchers, educators, and psychologists. Julia is on the autism spectrum, and Lehmann says her addition was influenced by research on viewers with autism. “It was becoming clear to the team at Sesame Workshop that children with autism needed representation. The company wanted to engage with autism and speak to our viewers,” he explains. “We have a social impact team of doctors, scientists, and caregivers who helped bring Julia to life.” Julia is voiced by puppeteer Stacey Gordon, who has a son on the spectrum.

How the puppets come to life

Although the characters may seem life-like, it takes quite a bit of innovation and engineering to make that happen. The first thing you need to know about the puppets? There are three main types: rod puppets, live-hand puppets, and walk-around puppets. Rod puppets have two rods underneath their arms. The puppeteer has his or her dominant hand where the mouth of the puppet is, while the other hand operates the rods. Elmo and Abby are rod puppets.

Walk-around puppets, like Big Bird and Snuffy, require one or more puppeteers walking around inside the puppet. Snuffy’s snout is made of PVC pipe, while Big Bird’s hands are held in place with fishing wire. A lot of work goes into the illusion of life in our favorite characters, including the creation of costumes, dialogue, and music. Here are 6 beloved Sesame Street songs with really weird backstories.

Jim Henson made this all possible

Jim Henson created the original character puppets for Sesame Street when he came on the show in 1969. He also developed the method that puppeteers still use today. “Henson created the puppet stage for television,” says Lehmann. The use of rolling stools, called “rollies,” which get puppeteers from place to place and the use of TV monitors as a guide for puppet interaction was all Jim Henson. And here’s a little-known fact: Henson was the original voice of Ernie.

Of course, he also created The Muppets, a beloved cast of characters that includes Miss Piggy, Kermit, and Fozzie Bear. Henson’s influence on puppetry and children’s programming is second to none. He died in 1990. Speaking of Henson’s influence, did you know that some of the best life advice comes from The Muppets? 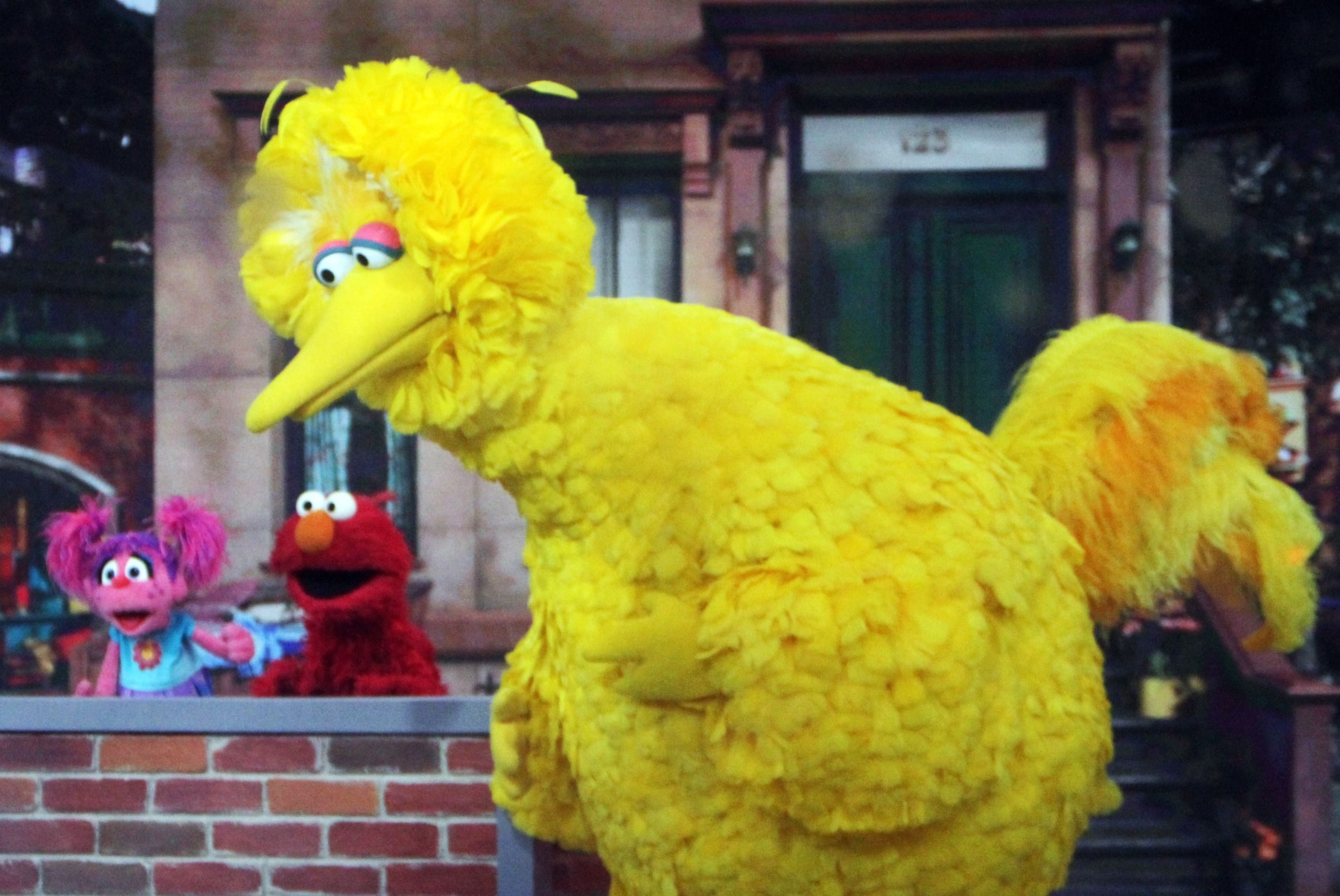 This song, which started being used at the end of each show in 2015, is also a mission statement. The social impact team at Sesame Workshop is constantly working to identify the emotional and educational needs of children all over the world. As a result, they extensively research topics like how to help kids cope with trauma, divorce, incarcerated parents, HIV/AIDs, and anything else that may be necessary to address for kids to be healthier and happier. Of course, not all songs are quite as wholesome, and some popular song lyrics don’t mean what you think. 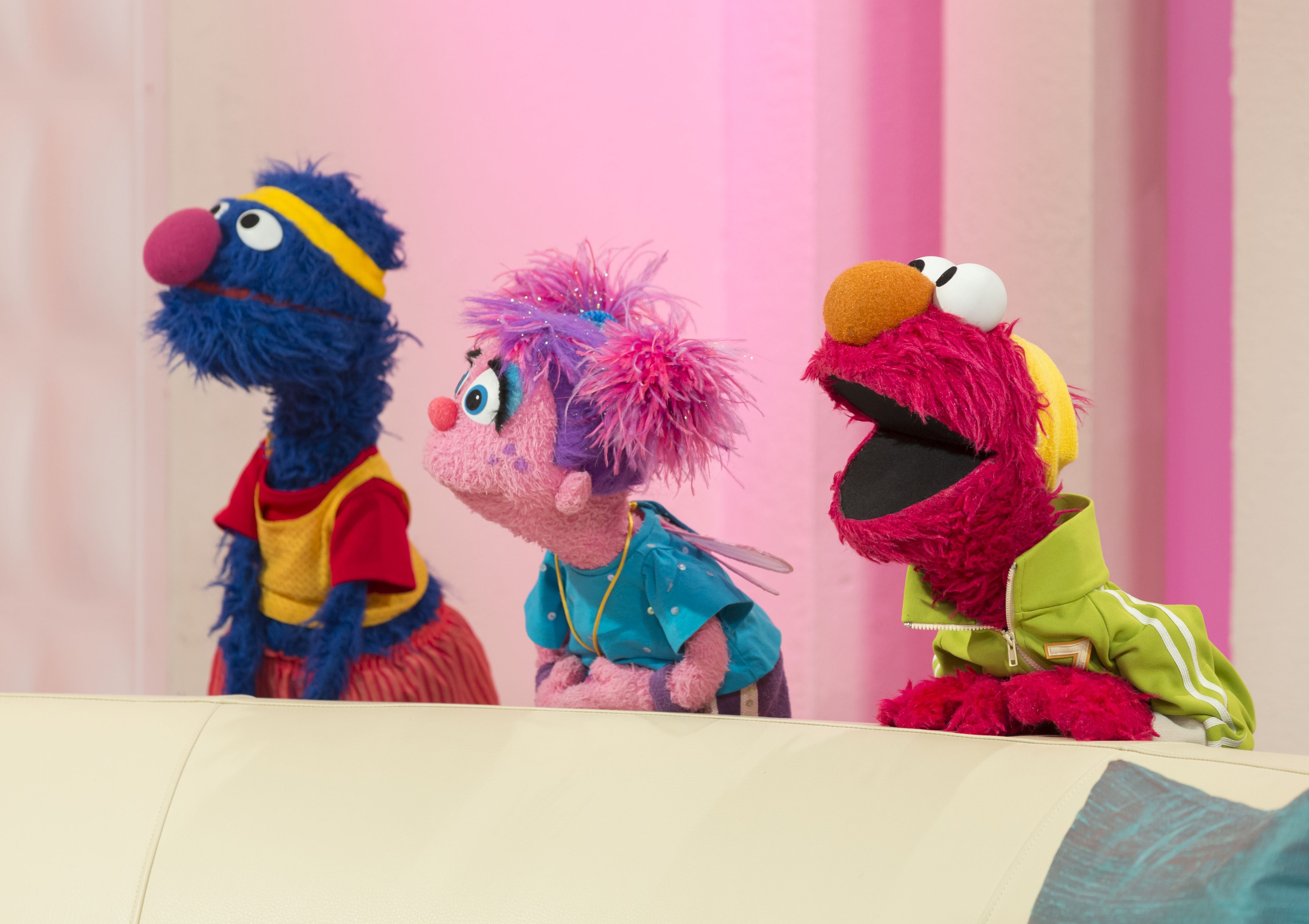 What’s next for Sesame Street

Lehmann’s not exactly sure what’s in store for Sesame Street, but he knows it will continue to forge the path of teaching children everywhere. “We continue identifying the current needs of kids,” he says. “We’re learning that it’s not just about teaching kids their ABC’s and 123’s. It’s about teaching kids that taking risks and learning to be flexible are skills that are also important to learn.” Lehmann says they hope to inspire kids for the next 50 years and beyond.