Find out which zodiac signs will be there for you in a pinch and which ones might not show up when you need them.

Who can you trust?

There are several dimensions to trustworthiness, so when it comes to assessing the most and least trustworthy zodiac signs, you need to consider a few questions. For example: Can they keep a secret? Will they be there for you in a pinch? Will they always tell the truth? Can you trust them to complete a task on time? People are complex, so a person might be totally trustworthy in one way…and not so much in another. Those nuances may be especially important in certain work situations or when determining your compatibility with a potential partner.

Aside from wondering who you can rely on, you’re probably also curious where you fall on the trust spectrum. We asked astrologer Guadalupe Terrones to lay out the strengths and shortcomings of each zodiac sign when it comes to dependability and truthfulness in various relationships. To find out where you rank, scroll through the 12 signs below, which we’ve listed in descending order from most to least trustworthy. Knowing who you can count on may help you navigate through the unluckiest (and luckiest) months of 2021. 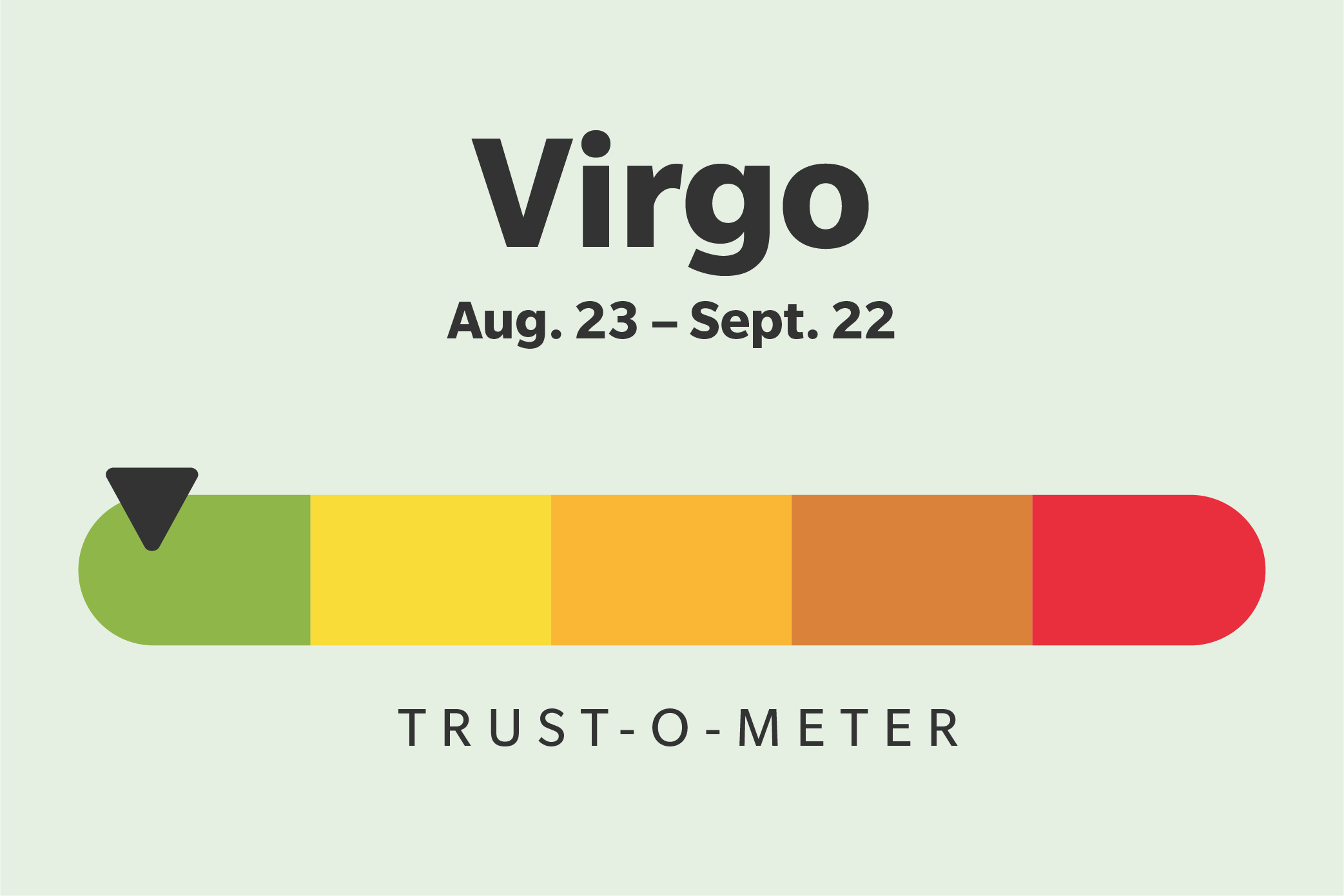 Sturdy, reliable, and honest, Virgo is the epitome of trustworthiness. Their detail-oriented minds make them sticklers for punctuality. This trait also helps them remember almost everything you tell them, which makes them apt advice-givers. “They’re very thoughtful,” Terrones says. “They’re always going to tell you the truth. Sometimes those truths can be a little harsh, but they’re really just trying to help you. They don’t feel like the opposite would benefit you in the long run. They want you to improve.” Virgos aren’t just good friends—they’re trustworthy coworkers, too. 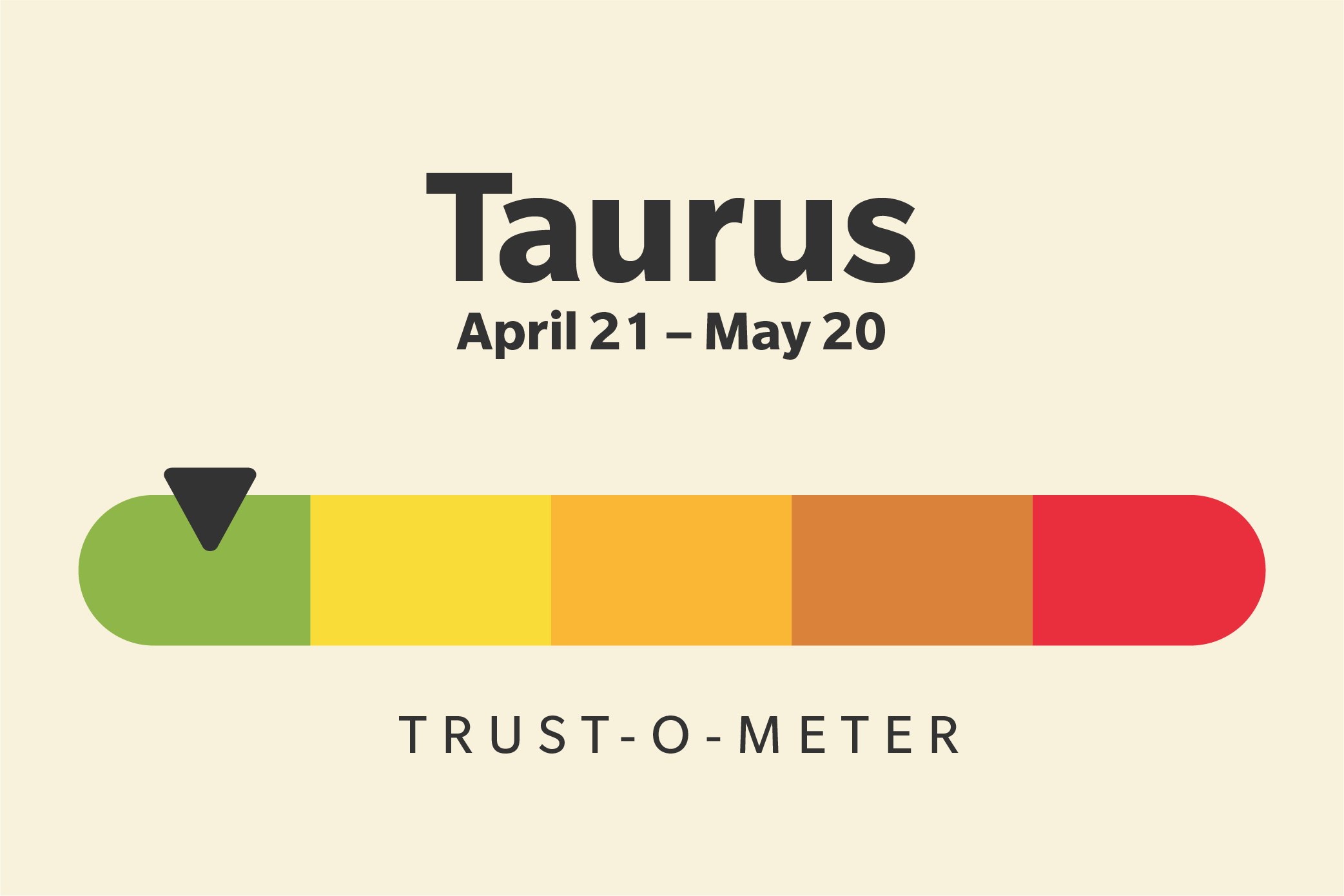 An earth sign like Virgo, Taurus also ranks high on the trustworthiness scale. “They naturally have this air to them that is stable, grounded, reliable, and practical,” Terrones says. “They’re the rock of a relationship or friendship.” But while your Taurus friends may always be in your corner, they may not always be the most straightforward communicators. An angry Taurus, for example, may not come right out and tell you what they’re feeling and can be aggressive. Often, they assume that you should know what they’re feeling or what you did wrong without them having to say it directly. Meanwhile, you may feel their indirectness is inconsiderate. When words fail, try using body language to build trust. 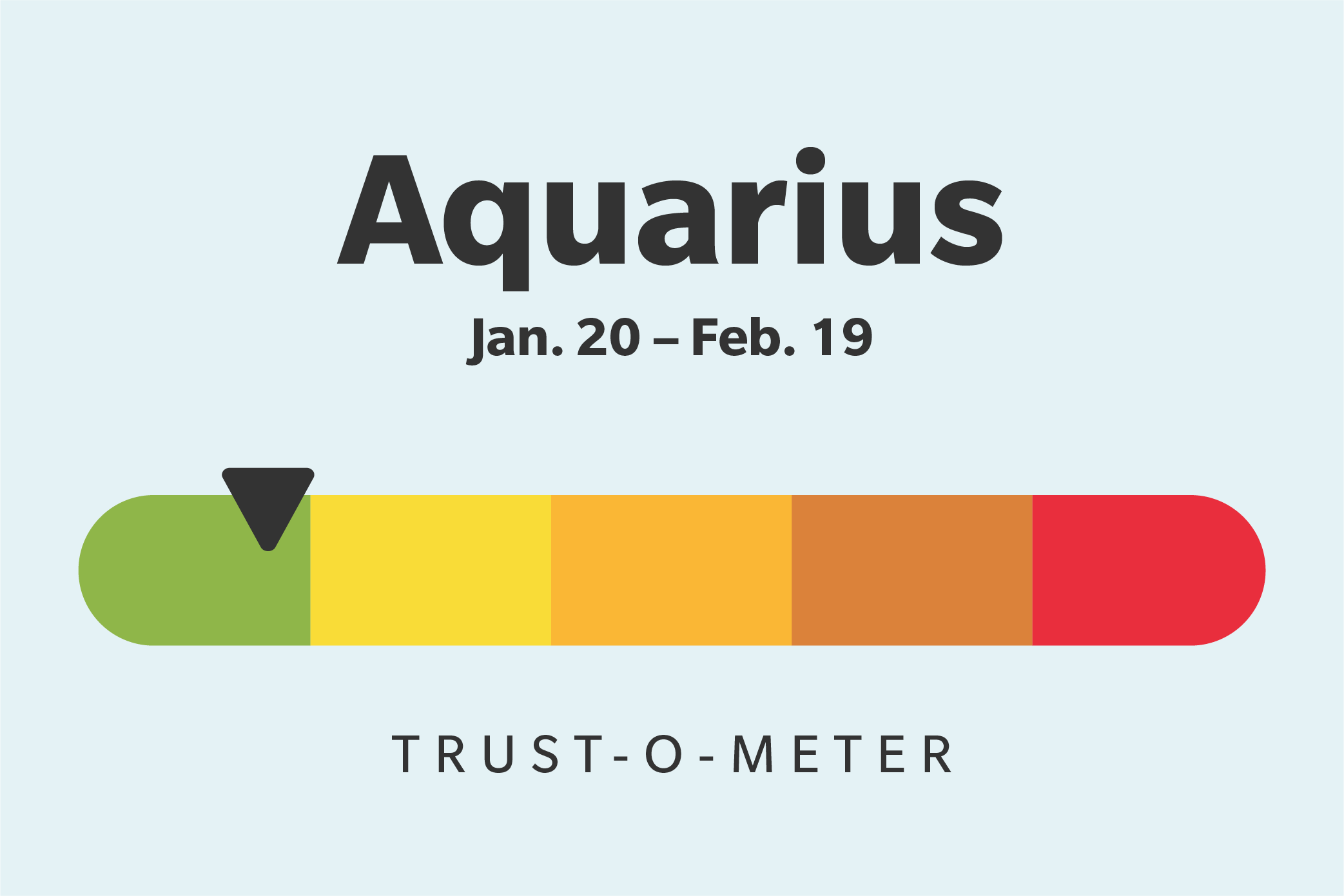 People born under this sign are trustworthy, if only for the fact that they are highly objective. To an Aquarius, truth is a matter of fact, not necessarily of morality. “People can rely on them, but to relate to them on an emotional level is kind of hardly ever achieved,” Terrones says. “They’re like the scientific version of trustworthiness.” This incredibly intellectual sign may not lie, but they may have a tough time understanding the nuances of personal matters, so figure out what type of guidance you need before confiding in them. Find out the ideal best friend for every zodiac sign. 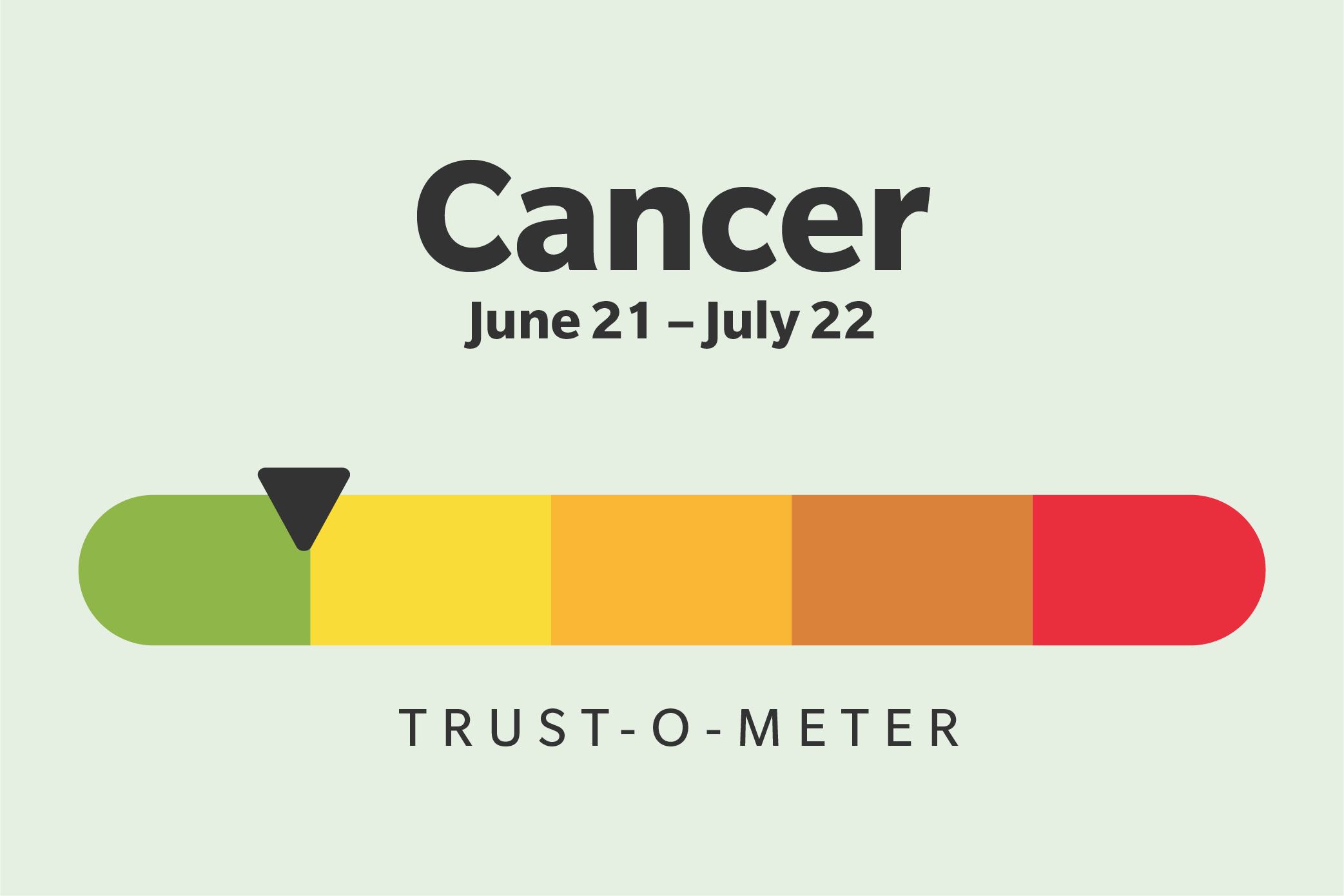 A caring and loyal sign, Cancer can be trusted to be there when you need them the most. Often described as the homemaker of the zodiac signs, Cancer can provide sanctuary and support in the worst of times. They’ll be a shoulder to cry on after a bad breakup, or the first one to come to your aid when a loved one is in the hospital. Like Taurus, though, this sign can waver a little when it comes to communication. “They tend to be passive-aggressive,” Terrones says. “Their emotions are more trustworthy than what they say.” So where an Aries will tell it like it is (more on that below), Cancer will make you read between the lines. That’s probably also why they are one of the most polite zodiac signs. 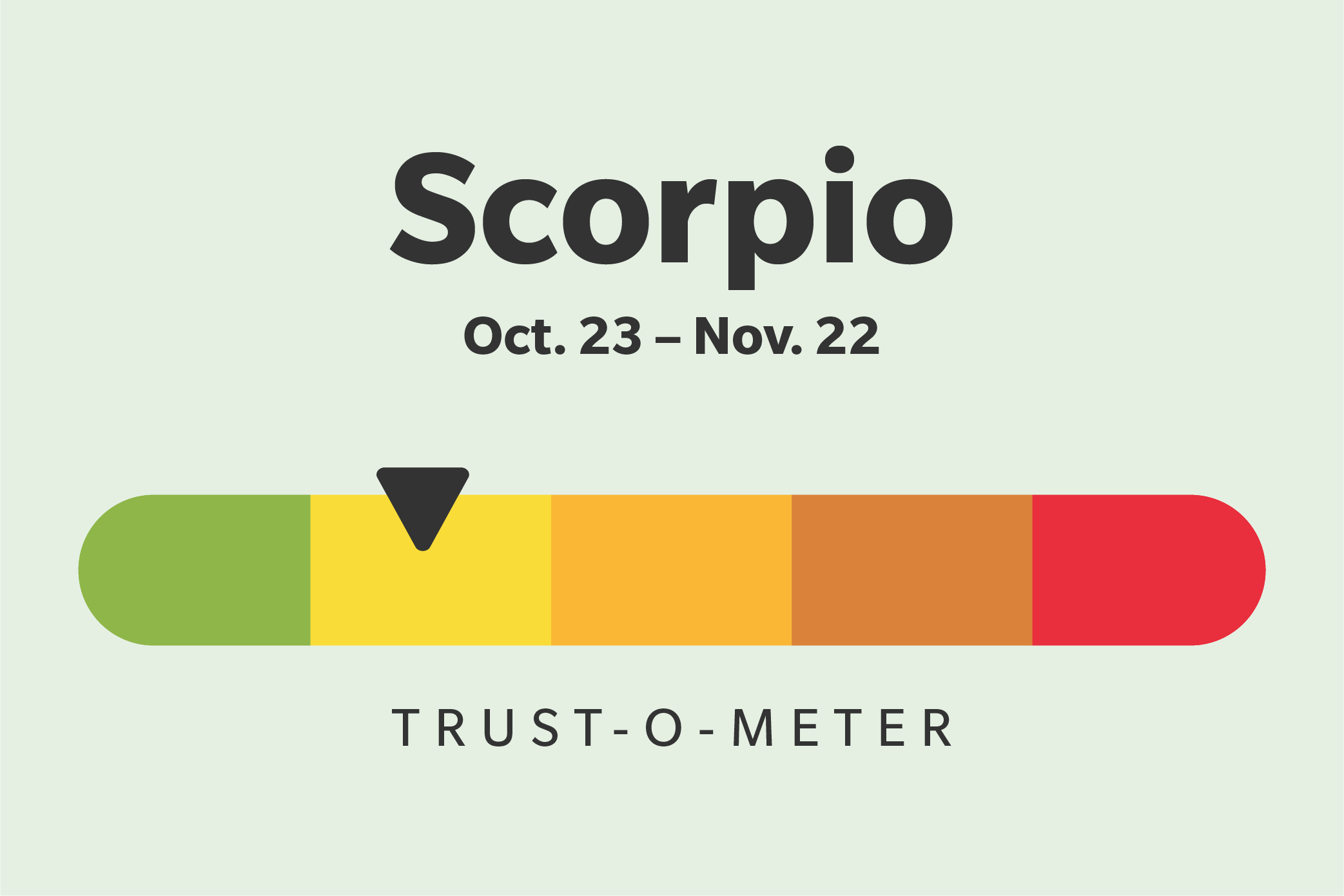 Scorpio is a secretive sign, but that doesn’t make them malicious. “They’ll never wear their heart on their sleeve,” Terrones says. “They’re the water sign you’ll probably have to be really intuitive with because they’re so private.” A Scorpio won’t be the first to offer advice or opinions, or even make themselves readily available to you. “That being said,” Terrones continues, “once you get past the icy barrier, they’re probably one of the most trustworthy and loyal signs.” They will keep your secrets as if they are their own and protect you as much as they would themselves. Learning to let people in is a great New Year’s resolution for Scorpio. 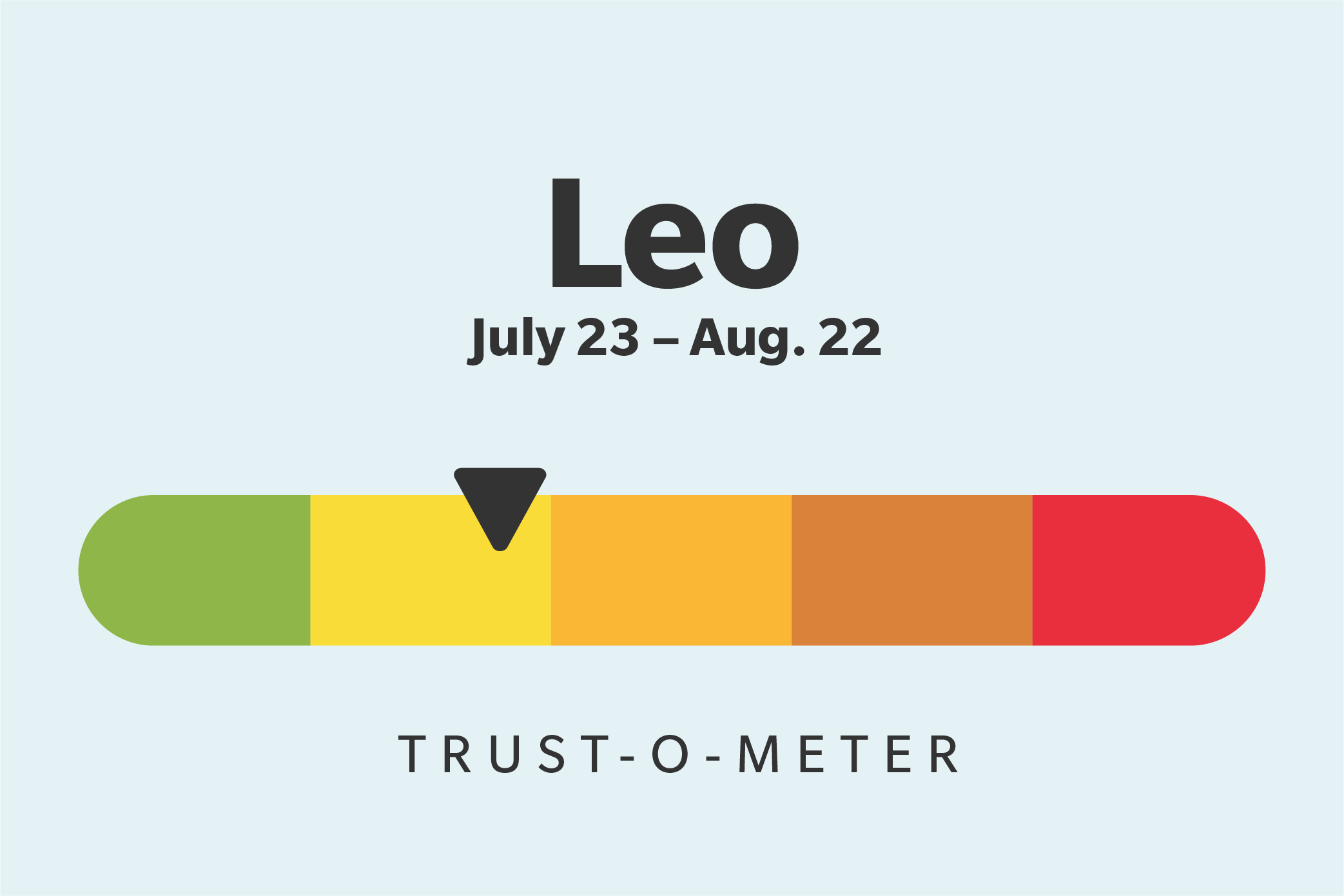 If Leo loves someone deeply, their loyalty will never be in question. “They’re always going to do what’s best for the other person,” Terrones says. They’re romantic, and they love grand gestures, both during the pursuit and when they have you securely in their grasp. There is no one quite as affectionate as a devoted Leo. However, this fire sign may sometimes burn too brightly with their passion. “They’re also dramatic,” Terrones notes. “They’re the actors of the zodiac. They can exaggerate and hyperbolize anything, so take their passion with a grain of salt.” Leo wouldn’t consciously lie to get what (or who) they want, but don’t confuse eagerness and embellishment with true love and commitment. Here are 10 subtle signs your partner sees you as just a fling. 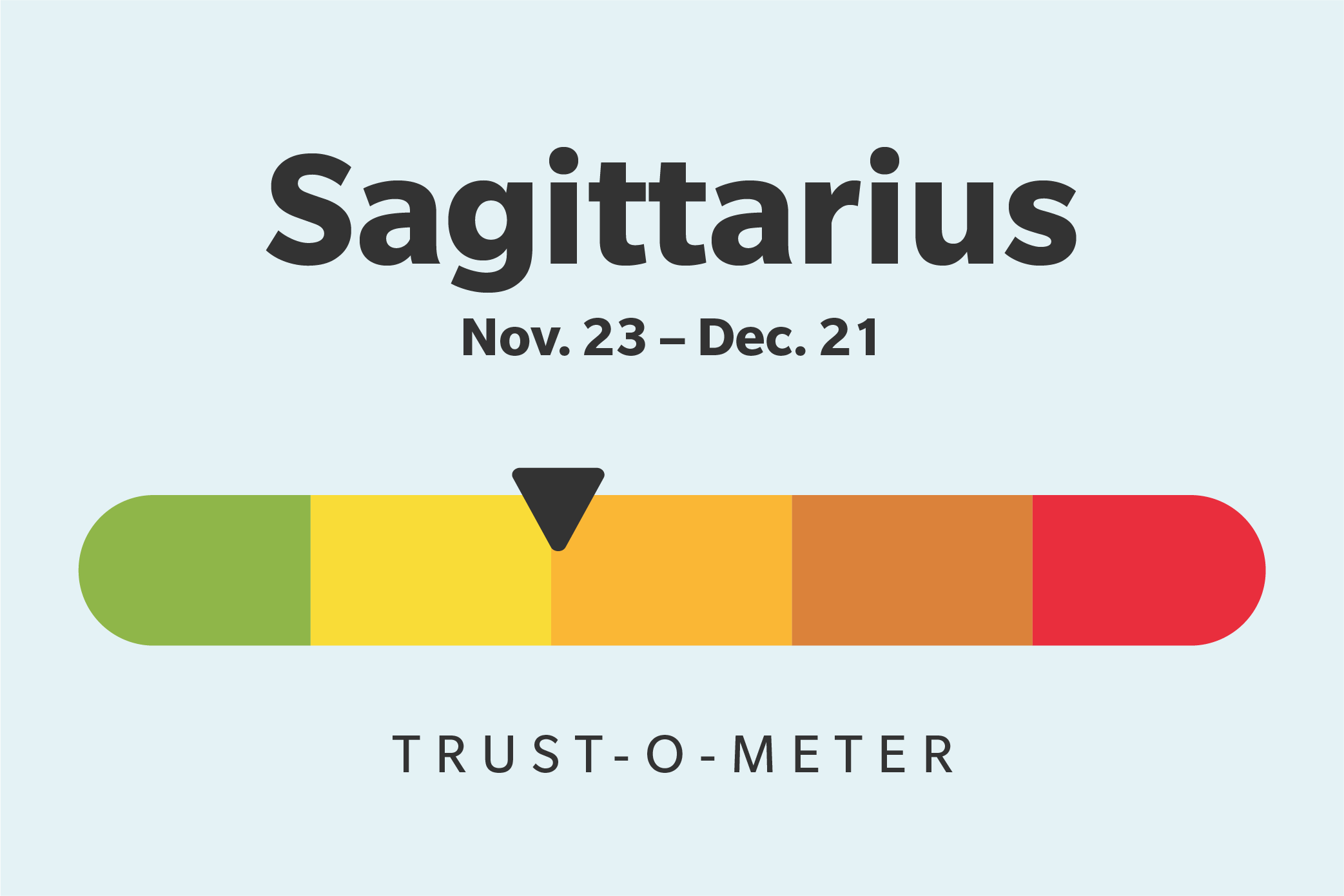 Sagittarius is a great friend who will be straightforward and frank, but they may not always come from a place of understanding. “Sometimes they can be kind of dogmatic,” Terrones explains. “You know what their beliefs are and what their opinions are.” You can always turn to a Sagittarius for honest advice, but it may not always be helpful because this sign can be a little tunnel-visioned. It may feel like you’re being judged, not heard, even if that is not their intention, so you may not always feel safe sharing your thoughts with them. Punctuality is also not usually their strong suit. “Can you depend on them to get up at 7 a.m. if you have plans? Probably not,” says Terrones. Looking to change your ways? Steal these 13 habits of people who are always on time. 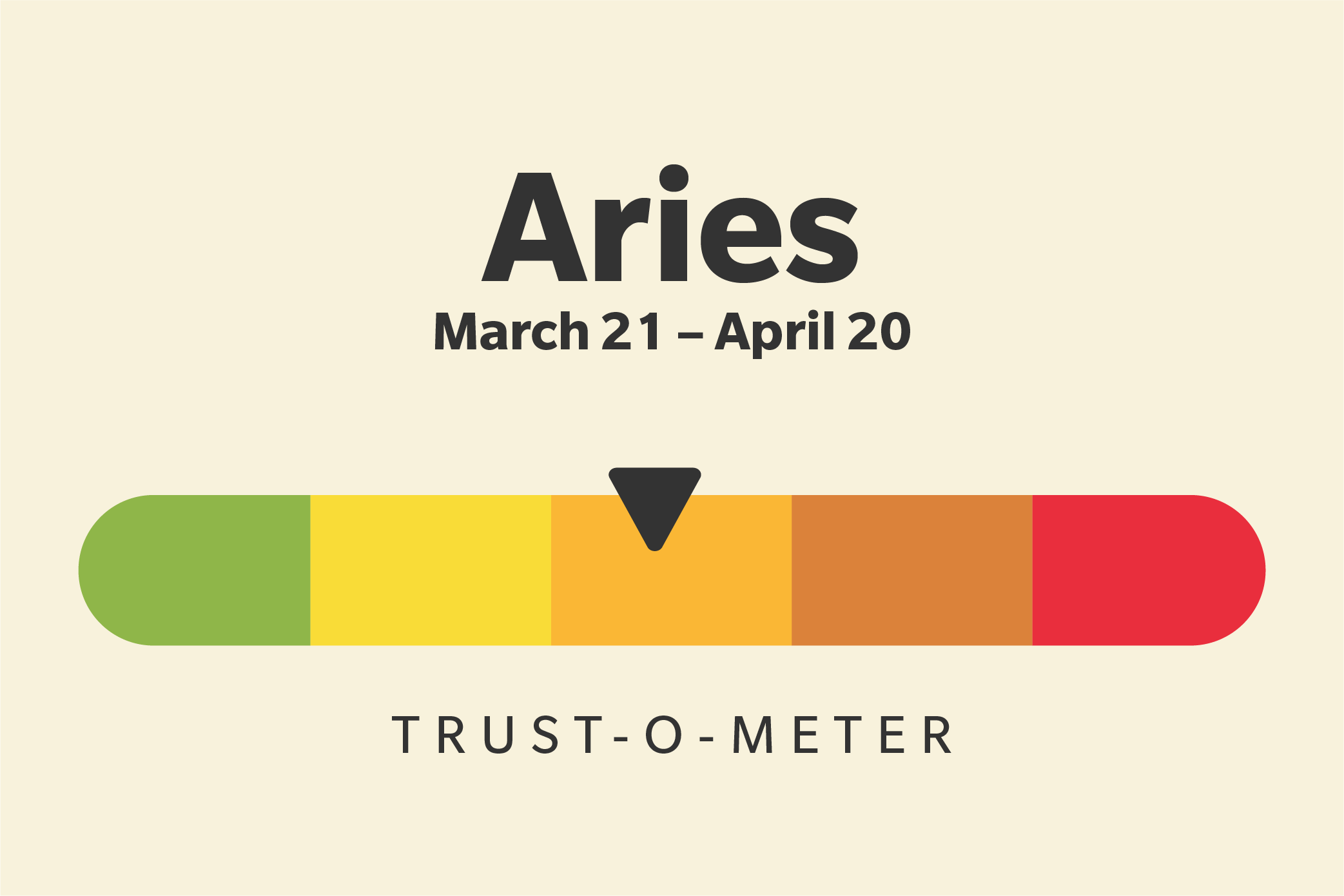 Aries is one of those signs that can be reliable in some circumstances but not in others. They will be honest—sometimes too honest—but they may not always be there. “If you consider trustworthiness to be more about reliability, punctuality, and keeping plans, then Aries is less trustworthy,” Terrones says. “They are quick to get excited about something…and also quick to not be excited about that same thing a few minutes later.” Whether it’s a project you’re working on together or a romantic relationship, Aries’ hot-and-cold attitude doesn’t provide much consistency. “They can be passionate during the chase, but get bored if there’s not constant excitement,” she explains. “I don’t want to say [they have a] wandering eye, but…” Be on the lookout for these common habits that destroy trust in a relationship. 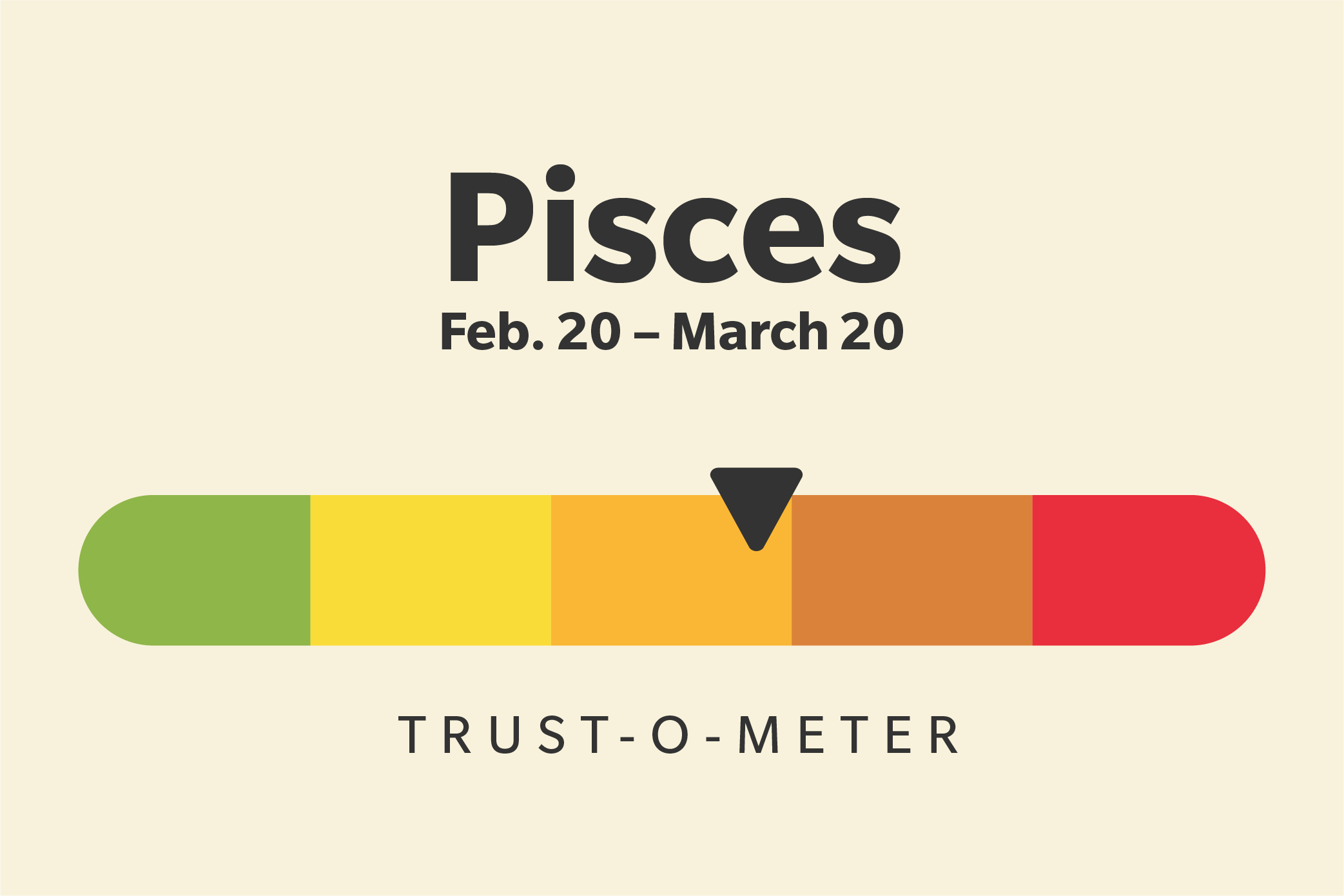 The compassionate Pisces will always be there for you—in principle. Getting them to be there on time, however, is a different story. “In terms of practical matters of reliability and dependability, they’re not always in the right place when you need them,” Terrones says. “But in terms of loyalty and emotionally, they’re always going to be there for you.” People of this sign tend to be creative and have a romantic outlook on life, so where Aquarius will paint an accurate picture of a situation, Pisces is likely to give the Picasso rendition of it. “Out of the water signs,” Terrones concludes, “they’re the [least] trustworthy, just because they’re in their own little world.” Find out the best compliment you can give a Pisces—and every other zodiac sign. 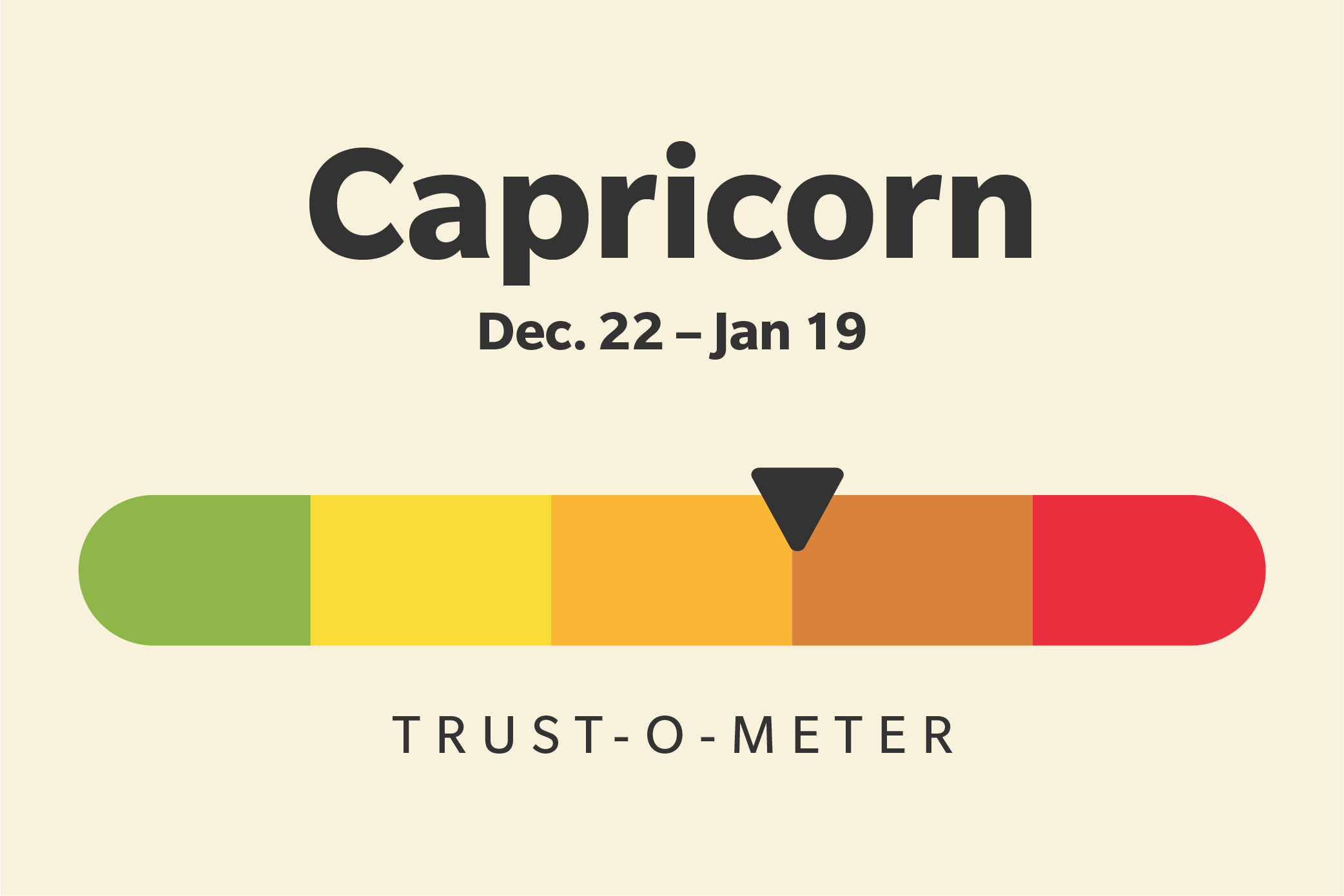 Capricorn, another earth sign, can be practical to a fault. A Capricorn will do what is best for them in any given situation, which isn’t to say that they can’t be trusted, but be aware that they can be indifferent. “They are trustworthy in terms of long-term relationships and friendships, but they can put themselves over the other person,” Terrones says. Also, be aware of where you stand in the friendship hierarchy: This sign will prioritize established relationships before new bonds. The good news is that Capricorns tend to be obvious about their (lack of) personal investment. “It’s not hard to tell when you should trust them and when you shouldn’t,” Terrones notes. If you’re still not sure, check out 13 habits that untrustworthy people have in common. 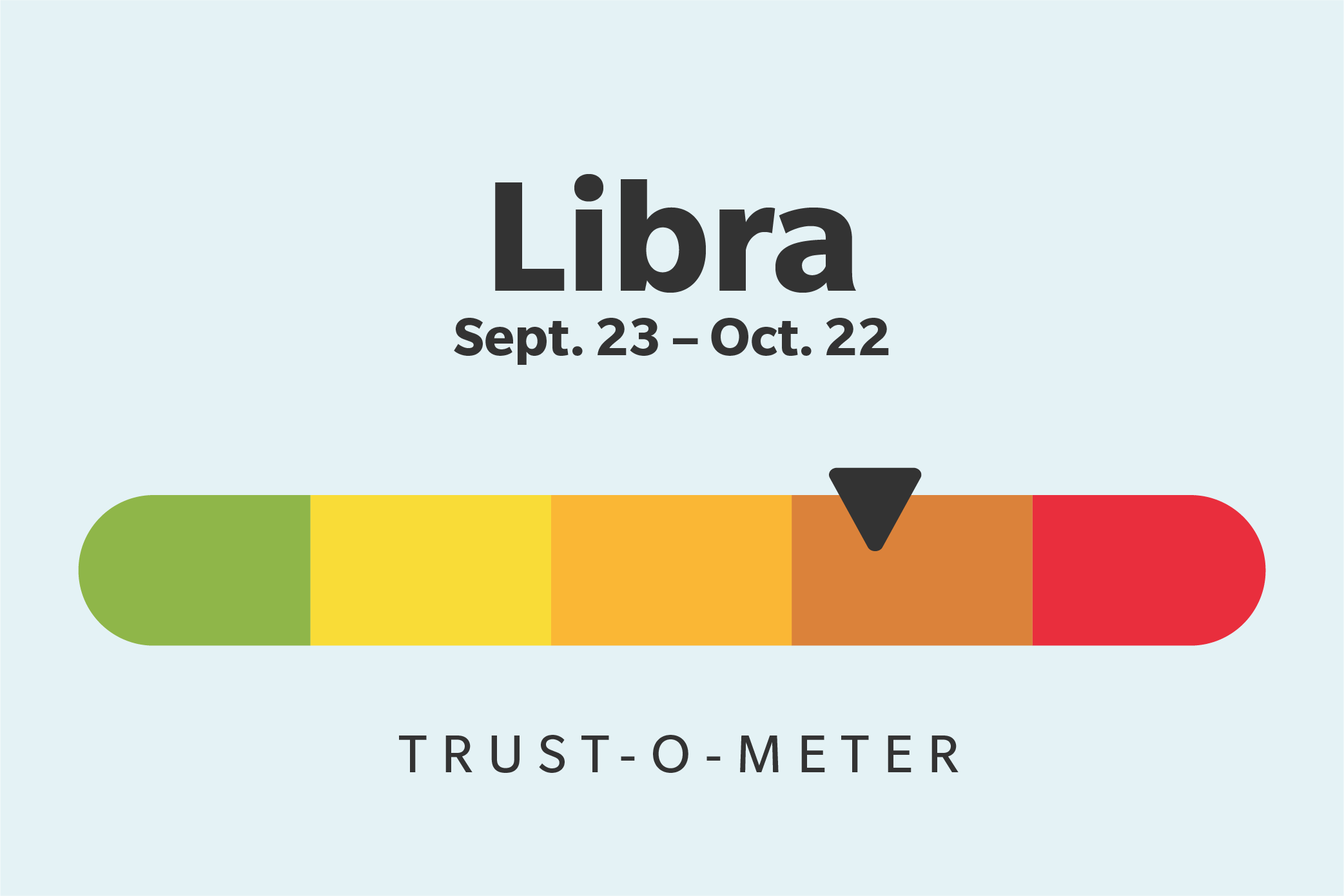 Libra is the sign of balance and fairness, but ironically, that doesn’t necessarily equate to trustworthiness. “They’re a sign that’s going to see two sides to an argument,” Terrones explains. “They’re always going to ask for other people’s opinions, and they’ll put those opinions, sometimes, before their own.” This makes it difficult to parse out what a Libra truly believes and what is just a regurgitated thought. So it’s not that they are fundamentally dishonest, but they don’t always shoot straight. “[But] once they’ve grown out of that, they have a very close relationship with the truth,” Terrones concludes. A Libra who is steadfast in their beliefs and honest with themselves will be the same way toward others. 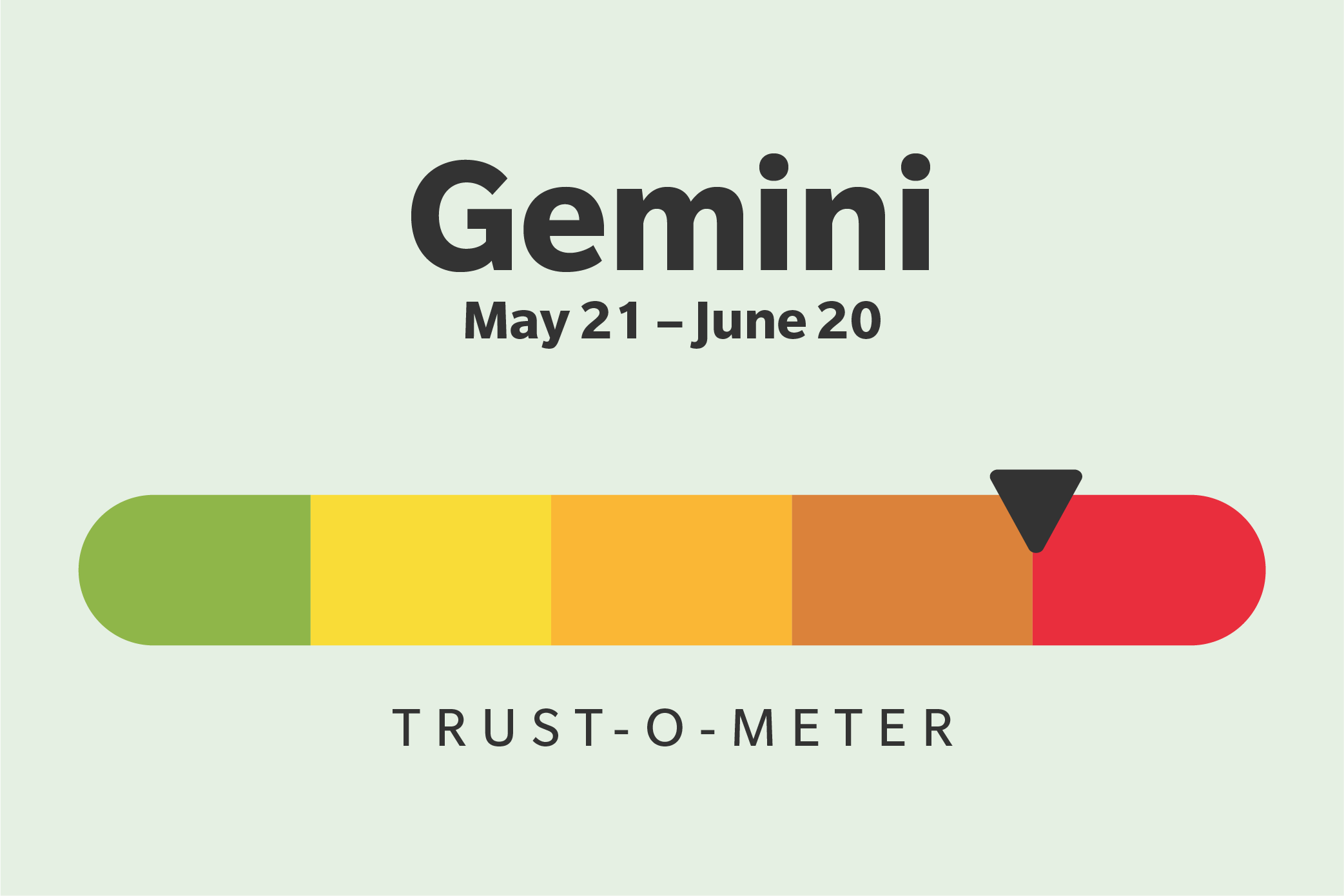 “Gemini is hilarious to talk about in this way because they get the reputation of being the least trustworthy of all the zodiac signs,” Terrones says. “They’re able to hold two truths within them at the same time, constantly playing devil’s advocate for themselves and for others.” For this reason, Gemini (aka the Twins) are often called “two-faced.” While this sign can be duplicitous, though, it is not always their intention. Rather, it’s their love and need for change that makes them less reliable. For example, you may have made plans with your Gemini friend to go to the beach in two weeks, but the night before your trip, they might decide there’s a concert in town they’d love to see instead. This could understandably feel like a betrayal, but wandering Gemini doesn’t see it that way. Just in case, beware of these 12 tricks con artists use to win your trust.