Let's give a round of applause for the other little guys who aim to predict the arrival of spring.

Maybe he just has a great publicist, but for far too long Punxsutawney Phil, the groundhog who predicts whether we’re in for six more weeks of wintry weather on February 2nd (Groundhog Day), has really stolen the spotlight from his brethren. Believe it or not, there are a slew of other famous groundhogs who have the same gig in their hometowns and have made quite an impression on their communities. So, without further adieu, meet the other furry little critters who everyone will be watching on Groundhog Day to find out if they see their shadows…or not. And in case you were wondering, here’s why we celebrate Groundhog Day in the first place.

Dunkirk Dave holds the auspicious title of being the world’s “second-longest prognosticating groundhog,” reports his official website. In 2019, the New York-based animal predicted an early spring. Bob Will, Dunkirk Dave’s handler, attributes his furry friend’s popularity to an article that appeared in the Dunkirk Evening Observer. “I have used a groundhog for over 58 years to predict the coming of spring weather,” Will says on the website. “Dunkirk Dave is the second-longest predicting groundhog. Also the only animal honored on the calendar is the groundhog.” Will is a state-licensed wildlife rehabilitator, which allows him to legally care for “sick, injured, and orphaned wildlife.” Here are the most memorable mishaps from Groundhog Day.

Good ol’ Buckeye Chuck hails from Marion, Ohio, and is his state’s answer to Punxsutawney Phil. How did he score the name? It dates back to the 1970s. “As a joke on the air, Charlie (Evers, radio host) says, ‘What are we going to name our groundhog for Groundhog Day?'” said Scott Shawver, Mansfield and Marion senior vice president for programming at iHeartMedia, in an interview with Ohio Magazine. “We had a contest.” Buckeye Chuck was the winning moniker, and he has visited WMRN radio station every year since on February 2nd. There’s a celebration that coincides with his arrival, and revelers come from states beyond Ohio to join in on the fun. Of course, there have been a number of Buckeye Chucks over the last four decades; groundhogs have a life span of about 14 years in captivity, about half that in the wild. Check out 16 more facts you need to know for Groundhog Day.

When you’re down South and need a prediction about the arrival of spring, look to General Beauregard Lee, a resident of Dauset Trails Nature Center in Jackson, Georgia. According to his official Twitter account (yep, he has one), GBL enjoys naps, digging tunnels, and hash browns. In 2019, he predicted six more weeks of winter, and by the results of a Twitter poll in which he asked what people thought of his forecast, 80 percent of respondents said he was right on. General Beauregard Lee originally lived on Yellow River Game Ranch, but he was relocated to the nature center in 2018 when the ranch abruptly closed up shop. This is the scientific basis for popular folklore that predicts the weather. 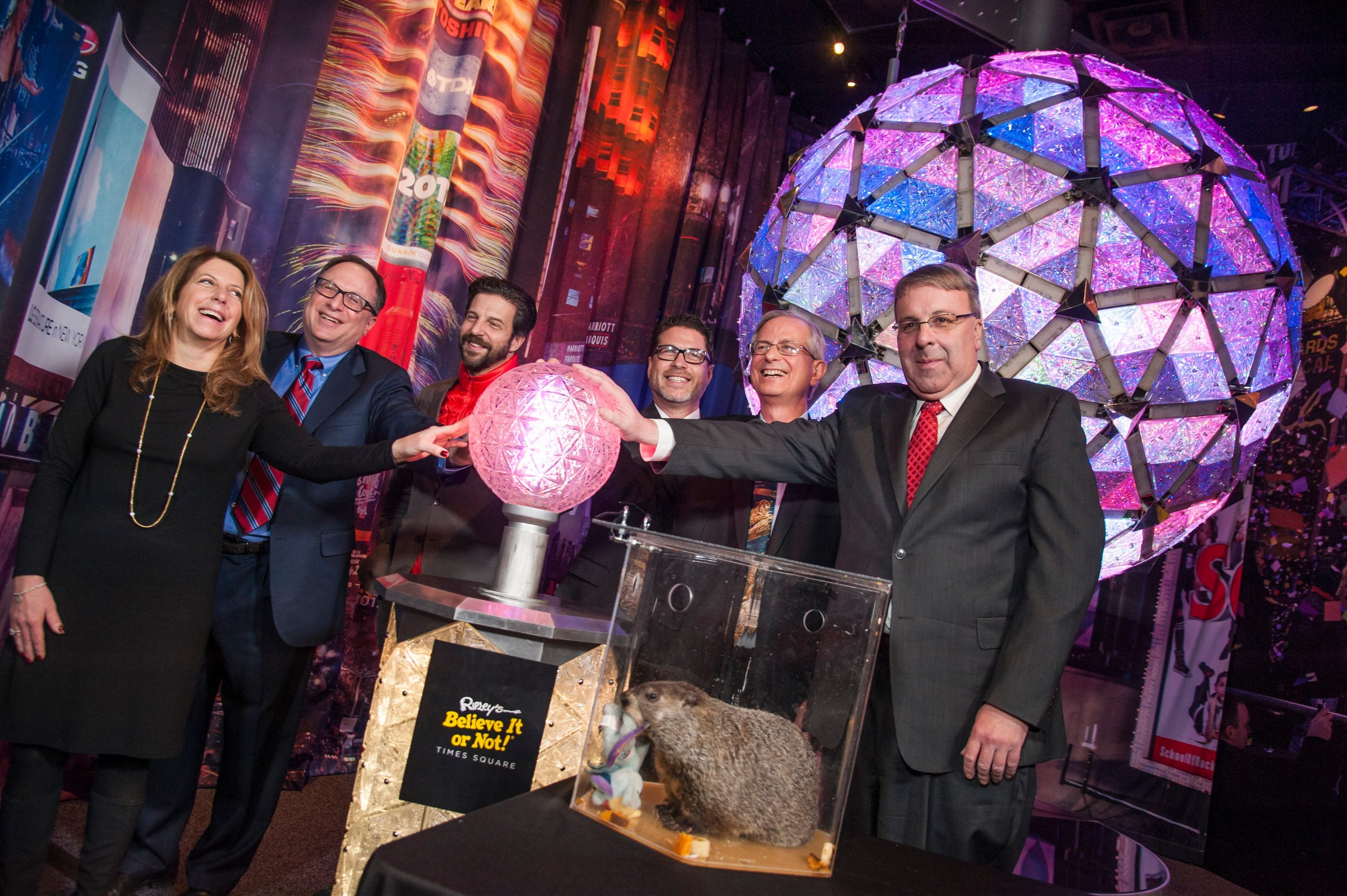 Chuck appears to be a popular name for groundhogs, although New York’s Staten Island Chuck also has a more formal name for when he’s feeling fancy—Charles C. Hogg. According to Spectrum News NY 1, Staten Island Chuck has a pretty sweet accuracy rate at 78 percent (as of 2019). Last year he predicted an early spring, much to the delight of New Yorkers who were ready to say buh-bye to the cold and bring on warmer weather. For those unfamiliar with the tradition, if a groundhog spots his shadow on the big day and goes back into hibernation, folklore says that winter will last an additional six weeks. If he doesn’t see his shadow and hangs out to socialize, spring is near. Even though we’re all wishing for an early spring, there are some surprising health benefits of cold weather.

In 2017, Connecticut found itself the beneficiary of a new groundhog—Chuckles IX. Earlier that same year, Chuckles VIII (we see a theme here) passed away, leaving an opening for a new weather prognosticator in the state. Chuckles IX was brought to the Lutz Children’s Museum from his original home to fill the role. “He was loved here, but we discovered that he had some pretty remarkable meteorological skills,” Ranger Russ Miller, director of Meigs Point Nature Center in Madison, Connecticut, told the Hartford Courant. “We knew he’d be happiest if we allowed him to move up to Manchester, where he could realize his dream of becoming a famous weather-predicting marmot.”

Yes, folks, we have another Chuck! This little fella hails from Chattanooga, Tennessee—hence, the name. Sadly, the Chattanooga Chuck who made 2019’s prediction passed away in November. He spent a decade in the spotlight, according to ABC News Channel 9. The Tennessee Aquarium, where he resided, posted a sweet message about the endearing groundhog after his passing: “Literally millions of people came to know Chattanooga Chuck through his special Groundhog Day prognostications. Chuck made his first seasonal forecast at the Aquarium in February of 2010 and rose to fame as one of the Weather Channel’s ‘Top Groundhogs to Watch’ and appeared live on CNN as well as numerous other media appearances.” That’s a pretty impressive resume. Check out these other animals with real superpowers.

Move over Buckeye Chuck—there’s another groundhog in town. Thistle the Whistle-pig joined Ohio’s Cleveland Museum of Natural History back in 2015 and is enjoying a bit of fame in her own right. According to the museum’s website, she became part of the family at just 5 weeks old, born as the runt in a litter of five. Since then, Thistle has made a name for herself, partaking in CMNH’s annual Groundhog Day festivities since she arrived. If you’ve ever wondered why groundhogs are sometimes called whistle-pigs, here’s your answer: According to Scientific American, when these animals are surprised or sense danger, they let out a high-pitched whistle to warn other groundhogs. Here’s how accurate Punxsutawney Phil really is.

Weather watchers in North Carolina are all watching Sir Walter Wally on Groundhog Day to find out what the critter will predict in terms of an early spring. Last year the little guy predicted six more weeks of winter, according to the North Carolina Climate Office, which wasn’t entirely accurate for 2019. But, hey, everyone has an off-year once in a while. Interestingly, the state’s climate office also points out that groundhogs aren’t the only animals thought to predict the weather. They cite woolly worms, geese, and crickets as forecasters, too. While that’s all well and good, we’ll stick with Groundhog Day. Woolly Worm Day just doesn’t have the same appeal. Don’t trust your favorite groundhog? Here’s how to predict the weather based on certain types of clouds.

With a name befitting a Cajun groundhog, Pierre C. Shadeaux is the premier weather prognosticator in Louisiana. However, they do things a little differently at the Zoo of Acadiana, where Pierre lives. As reported by the area’s local News 15: “If Pierre sees his shadow, that means we’re in for a short spring, so we’ll have to face the heat of summer quickly. But if Pierre doesn’t see his shadow, we’ll have six more weeks of mild temperatures.” It should also be noted that this little fella isn’t actually a groundhog. He’s a nutria, which is a semi-aquatic rodent, but he’s still treated as the star of Louisiana’s Cajun Groundhog Day. These are 13 things your TV weather forecaster won’t tell you.

A groundhog named Grover is giving Punxsutawney Phil a run for his money in the state of Pennsylvania. Over in Schuylkill County’s Pine Grove, Grover has been known to make a different weather prediction than famous Phil, says the Citizen-Standard. The event starring Grover began back in 2006, originated by Pine Grove Grundsau Lodge No. 5. Today, the Sweet Arrow Lake Conservation Association has taken over hosting duties, which feature not only Grover the Groundhog but also his pal Sweet Arrow Sue. “Grover’s prediction is more centralized for Schuylkill County, that’s what we like to say,” said Denise Donmoyer, president of the Sweet Arrow Lake Conservation Association, in an interview with The Citizen-Standard. Next, check out the weather myths you need to stop believing.

Winter Survival Tips from the Coldest Parts of the Country