This is what happens when a beloved pop icon isn't allowed to have control over her own life.

In the early aughts, Britney Spears was arguably the most famous pop star in the world. But the singer, best known for her bubbly hits like “…Baby One More Time,” became more notorious for her erratic behavior around 2007. Spears shaved her head and spent stints in rehab. Of course, there was also that time she took an umbrella to a paparazzo’s car. The following year, she was placed under a conservatorship, which took away legal control over her hard-earned financial and personal assets.

Following that court decision, Spears’ fans created the Free Britney movement, and it’s really picked up steam over the last few years. These admirers, vehemently in the pop star’s corner, wanted to see her finally regain legal control over her own life. Recently, the New York Times released the documentary Framing Britney Spears, which takes aim at the conservatorship still in effect today, 12 years later. Legal drama aside, Spears has also been at the center of some pop culture conspiracy theories over the years, including a few related to the conservatorship.

What does Free Britney mean?

In a nutshell, Free Britney is simply the name for the movement of the singer’s supporters who want to see an end to her conservatorship. The growing group of her admirers congregate peacefully outside of public places, typically holding Free Britney signs while playing her music. Their motive? Getting the message across that the pop star should be able to live her life without being under this court-mandated order. For example, the group convened outside of the Los Angeles courthouse where Spears’ latest hearing was heard on February 11. Spears hasn’t released a new album since 2016, but there’s a reason why so many people still love her music—our brains actually prefer the music from our youth. 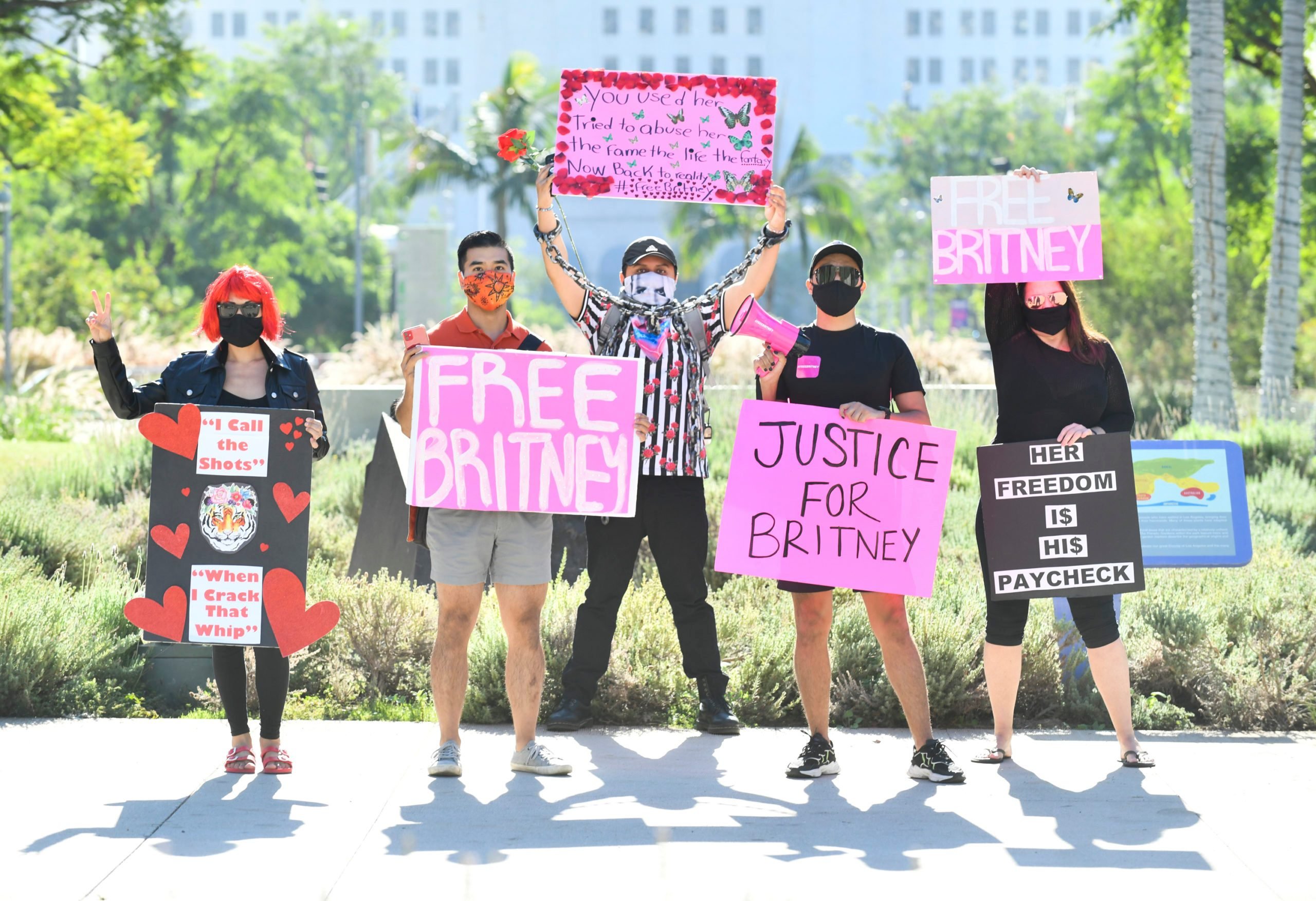 What is a court-sanctioned conservatorship?

To understand why the Free Britney folks are so passionate about the cause, it’s helpful to know what constitutes a court-sanctioned conservatorship. As defined by the California Courts’ website, “a conservatorship is a court case where a judge appoints a responsible person or organization (called the ‘conservator’) to care for another adult (called the ‘conservatee’) who cannot care for himself or herself or manage his or her own finances.” In Spears’ case, her father, Jamie Spears, was appointed as conservator over her very sizable estate. If you include her early stint on the Disney Channel’s The All New Mickey Mouse Club, she has been working for nearly 30 years; her current net worth is estimated at around $60 million.

Why make a documentary?

With the Free Britney movement in full swing, the New York Times chose to take a deep dive into what these fans, and idle pop culture aficionados, might not know about the conservatorship. They speak to insiders like Spears’ longtime assistant Felicia Culotta, who was a friend of the Spears family before acting as a chaperone of sorts beginning with the early days of her charge’s career. They also speak with a lawyer involved with the conservatorship today, as well as the lawyer Spears wanted to hire at the start of this legal debacle to remain in control of her own life. Britney’s story is heart-wrenching and insightful, and it offers a very different viewing experience than some of these bizarre stories that eventually became documentaries.

What are people saying?

The documentary, which is currently streaming on Hulu, has a lot of people talking. Perhaps most important, Spears herself seemed to comment on the film in an emoji-filled tweet. “Each person has their story and their take on other people’s stories,” she writes. “We all have so many different bright beautiful lives!!! Remember, no matter what we think we know about a person’s life it is nothing compared to the actual person living behind the lens!!!!”

Meanwhile, fellow celebrities have shown their support. Actress Valerie Bertinelli tweeted, “#FramingBritneySpears is a gut punch. So many horrible men/leeches in her life.” Talk show host Tamron Hall also shared her sadness for the singer, tweeting, “Finally watched ‘Framing of Britney Spears’ on Hulu. It’s an understatement to call it heartbreaking.” Need a palate cleanser after watching the doc? Try one of these feel-good films.

Where to Stream Movies Aside From Netflix

The Best 14 Reads From the 2020 Quarantine Book Club