Oat Milk vs. Almond Milk: Which Is Better for Your Health?

They're two of the most popular nondairy milks, but which wins in the showdown? We're diving in to the oat milk vs. almond milk debate.

The number of nondairy milk options at the grocery store seems to multiply daily. But staring down the cartons on the shelf can be confusing. How do you weigh oat milk vs. almond milk vs. soy milk vs. flax milk … or any combination of two or more? If you leave the plant-based milk aisle feeling overwhelmed, you’re not alone.

We asked experts on plant-based foods and nutrition to help us get the food facts straight and determine which nondairy milk is best. You’ll learn that and more below, including whether oat milk or almond milk is a more sustainable food; which will taste better in your cold brew coffee, chai tea or bubble tea; which is healthiest; and whether there are any downsides of almond milk.

What is oat milk?

Oat milk started popping up in cafes and coffee shops across the United States in 2017, says Christina Dorr Drake, founder of Willa’s Oat Milk. “It then quickly became the milk of choice in urban markets by 2018 because of its neutral taste profile, lack of allergens and the fact that oats are more sustainable than nut milks,” she adds. By 2021, oat milk had risen to the No. 2 spot among nondairy milks, behind almond milk.

If you want to make oat milk at home, simply blend together oats and water, then strain out the pulp. Commercially produced oat milk, which is essentially made the same way but on a much larger scale, might contain added vitamins, minerals, flavorings, oils or sugars, depending on the type you buy. 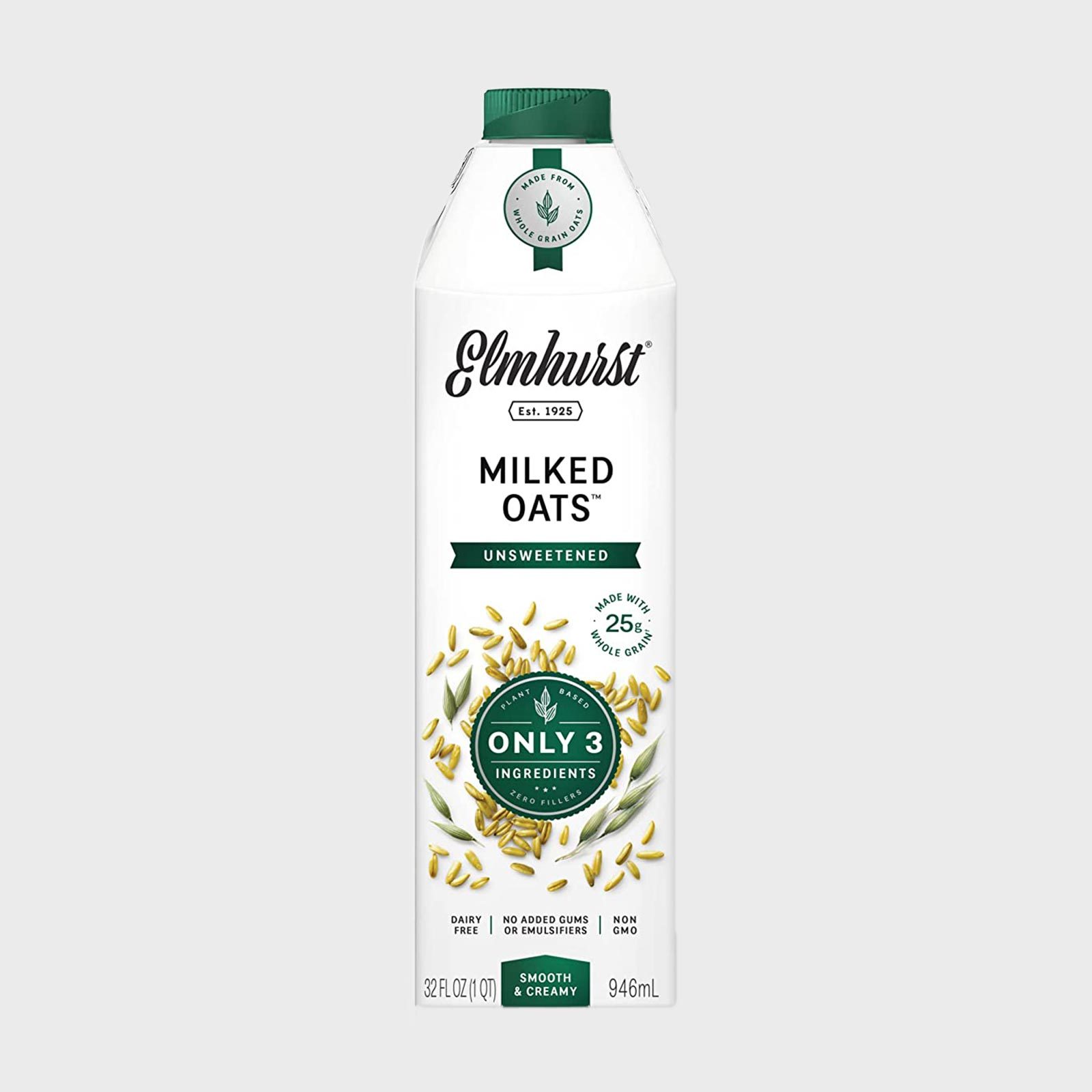 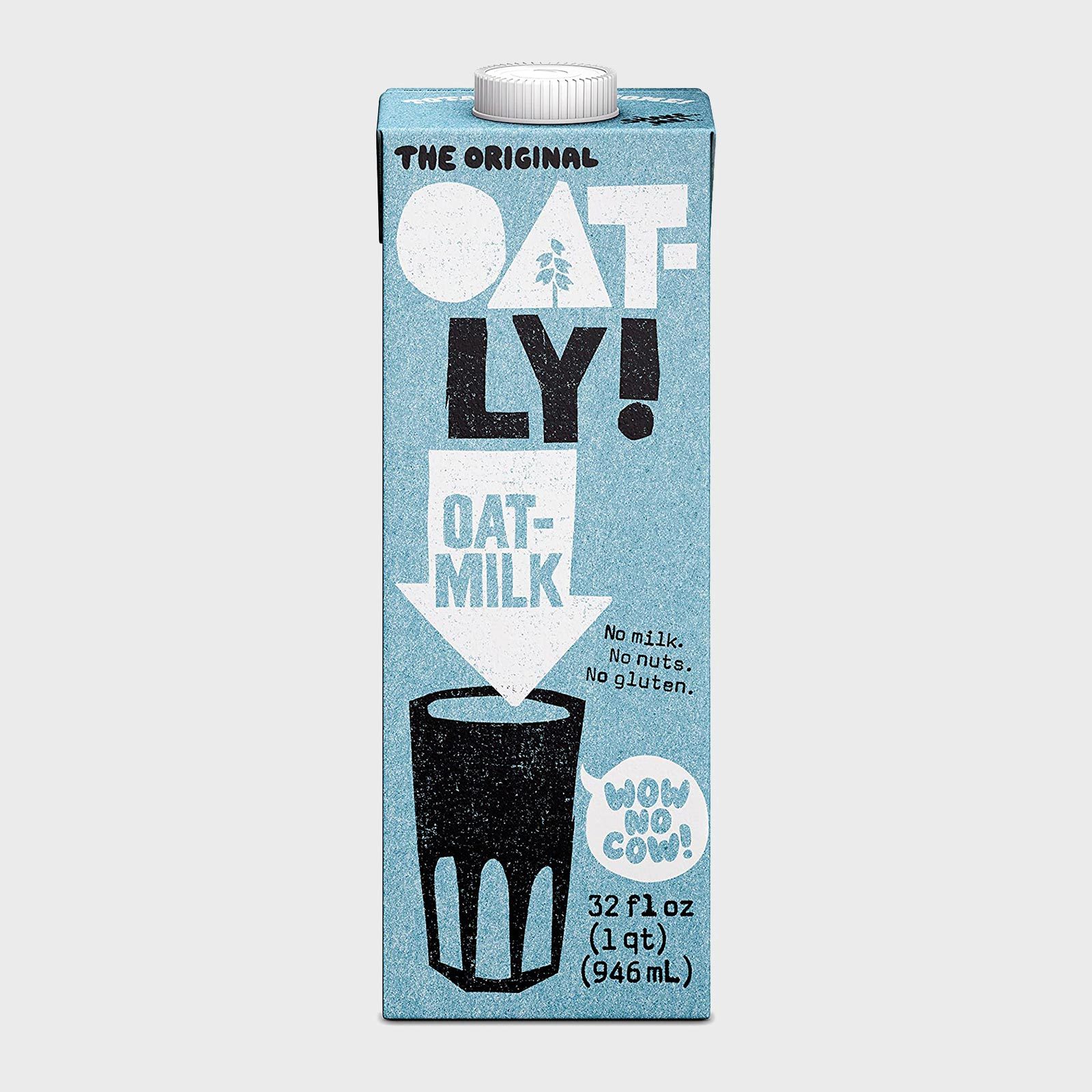 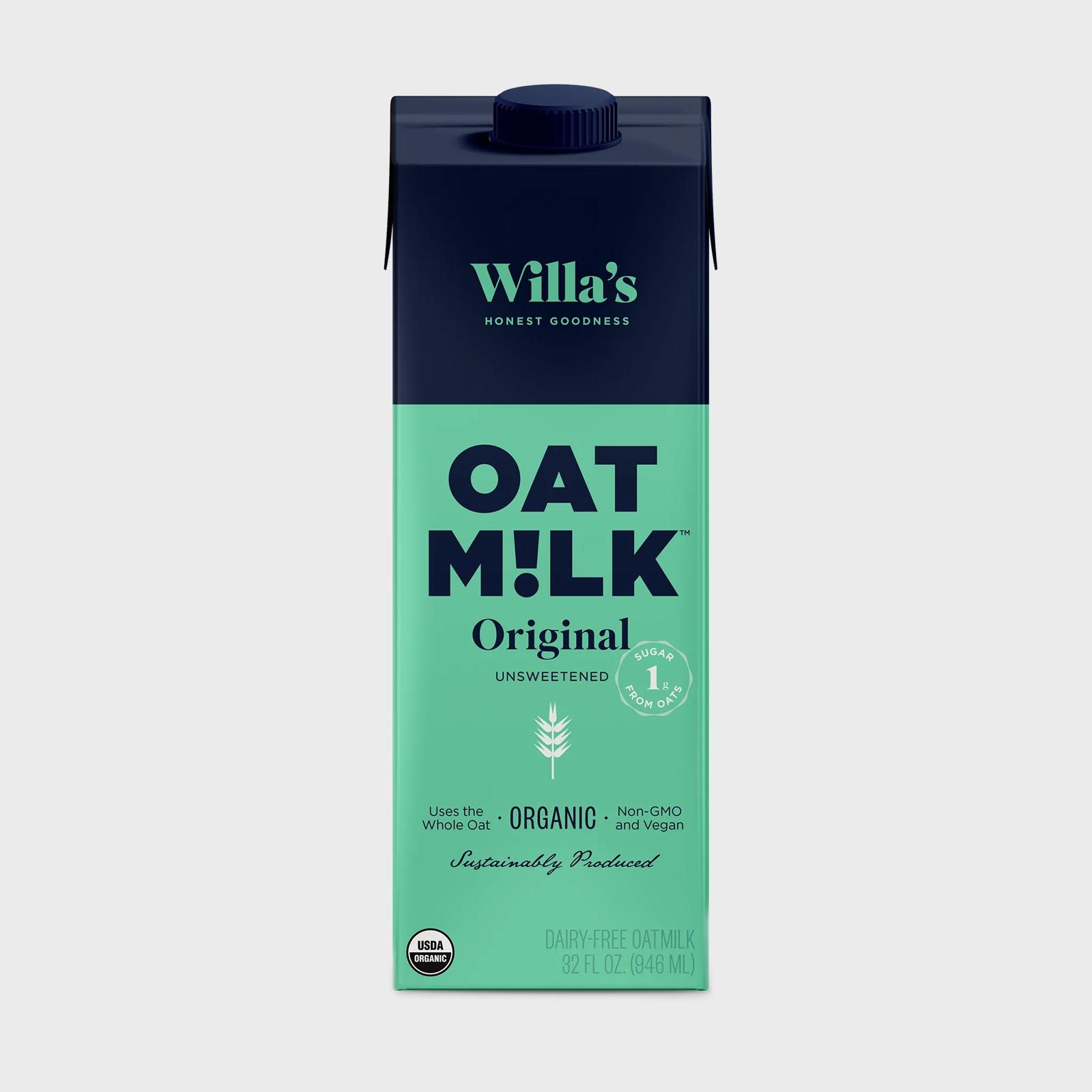 What are the benefits of oat milk?

“Oat milk is all around pretty close to dairy milk in terms of texture and creaminess, but it is definitely sweeter,” says chef and nutritionist Emily Peck, who whips up healthy vegan meals for meal-delivery service Cook Unity. “Oat milk is higher in calories and carbohydrates, but it in turn has more fiber and protein than almond milk. It’s a great choice for those with nut allergies. I like to use it for coffee and baking.”

Indeed, oat milk is the most popular plant-based milk for coffee drinks like lattes and macchiatos. And its mild flavor and creamy texture make it ideal for milk and cookies.

According to the U.S. Department of Agriculture’s FoodData Central, a cup of unsweetened oat milk contains the following:

Oat milk—and all plant-based milks, for that matter—are less damaging to the environment than the production of dairy milk. According to the World Wildlife Fund, dairy cows and their manure produce greenhouse gases that contribute to climate change. Improper handling of manure and fertilizers can damage water sources, and over-farming and over-production of feed can degrade ecologically important areas, like prairies, wetlands and forests.

Oats, on the other hand, and especially organic oats, are much more sustainable. “Oats are a cover crop, and organic oats are particularly good for soil health and carbon sequestration,” explains Dorr Drake. That means that instead of releasing more carbon dioxide into the atmosphere, the oat plants actually trap it.

Since oat milk can be made using the entire oat, it can also reduce food waste (though not every oat milk company uses the whole oat).

What are the disadvantages of oat milk?

While it is a smart choice for people who can’t tolerate dairy, there is a nutrition disadvantage when it comes to drinking oat milk vs. almond milk vs. dairy milk. “Nutrient-wise, skim milk offers twice the amount of protein of almond and oat milk,” says Allison Tannis, a registered holistic nutritionist at the Pritikin Longevity Center and a nutrition book author. “Dairy milk also contains more micronutrients than plant-based milks, according to published scientific studies. Some of these nutrients are added to almond and oat milks, but the fortification may vary from brand to brand.”

With dairy milk, you’re getting a good dose of vitamins A, B2, B12 and C, plus biotin, pantothenic acid, calcium, phosphorus and iodine. None of those are a given with nondairy milks.

What is almond milk?

“Around 2018, almond milk became the No. 1 plant-based milk,” says Dorr Drake. It has remained there ever since.

According to a survey from mid-2021, sales of almond milk were more than double the sales of the next category of plant-based milk, which was characterized as other milk substitutes, including oat milk. Despite this, Dorr Drake believes the popularity of almond milk is on a downswing, in large part due to sustainability concerns.

If you were to make almond milk at home, you would do so the same way as oat milk—blend almonds with water and then strain the mixture. And like oat milk, many commercially produced almond milks will feature additional vitamins and minerals, as well as sugar, thickeners, flavorings or preservatives. 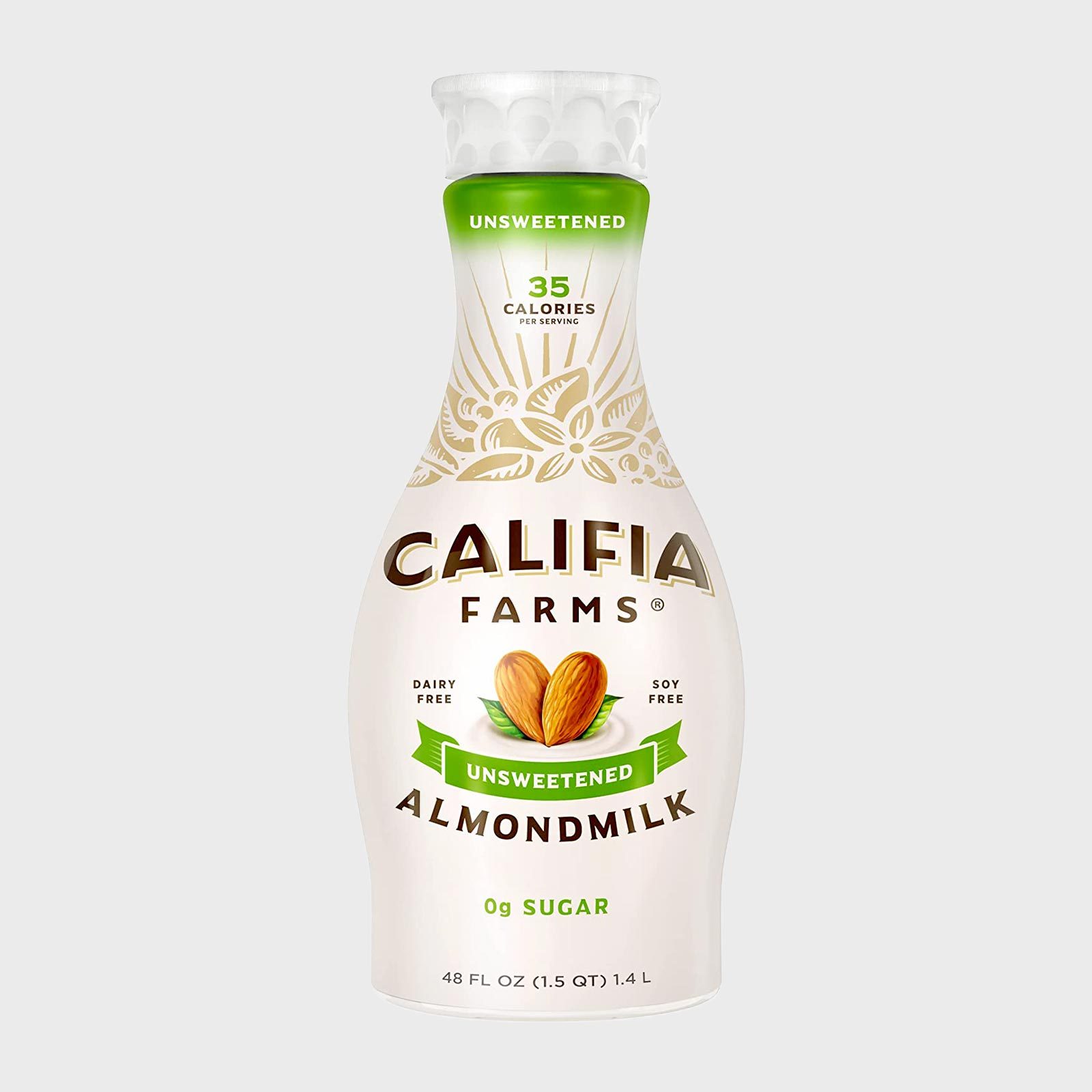 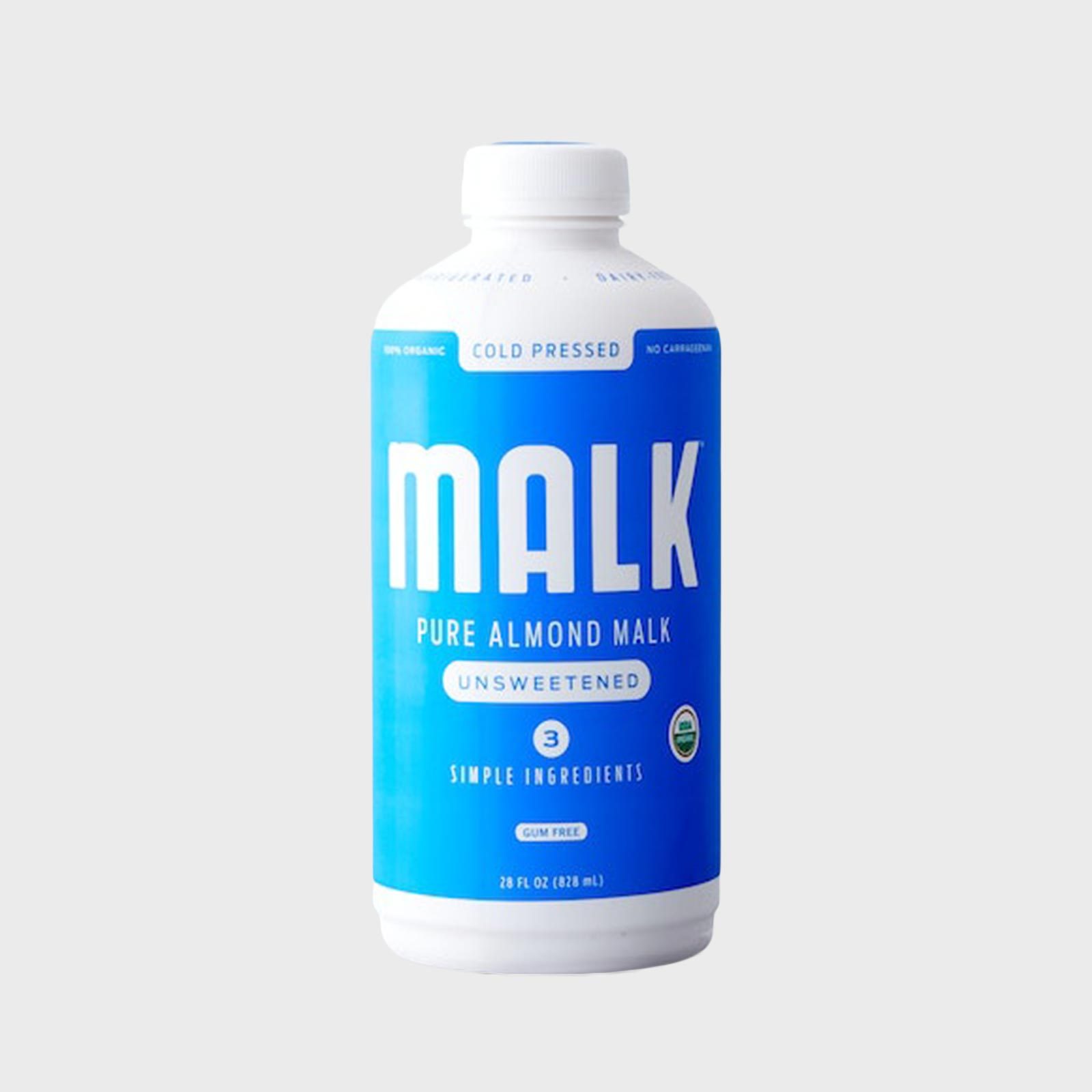 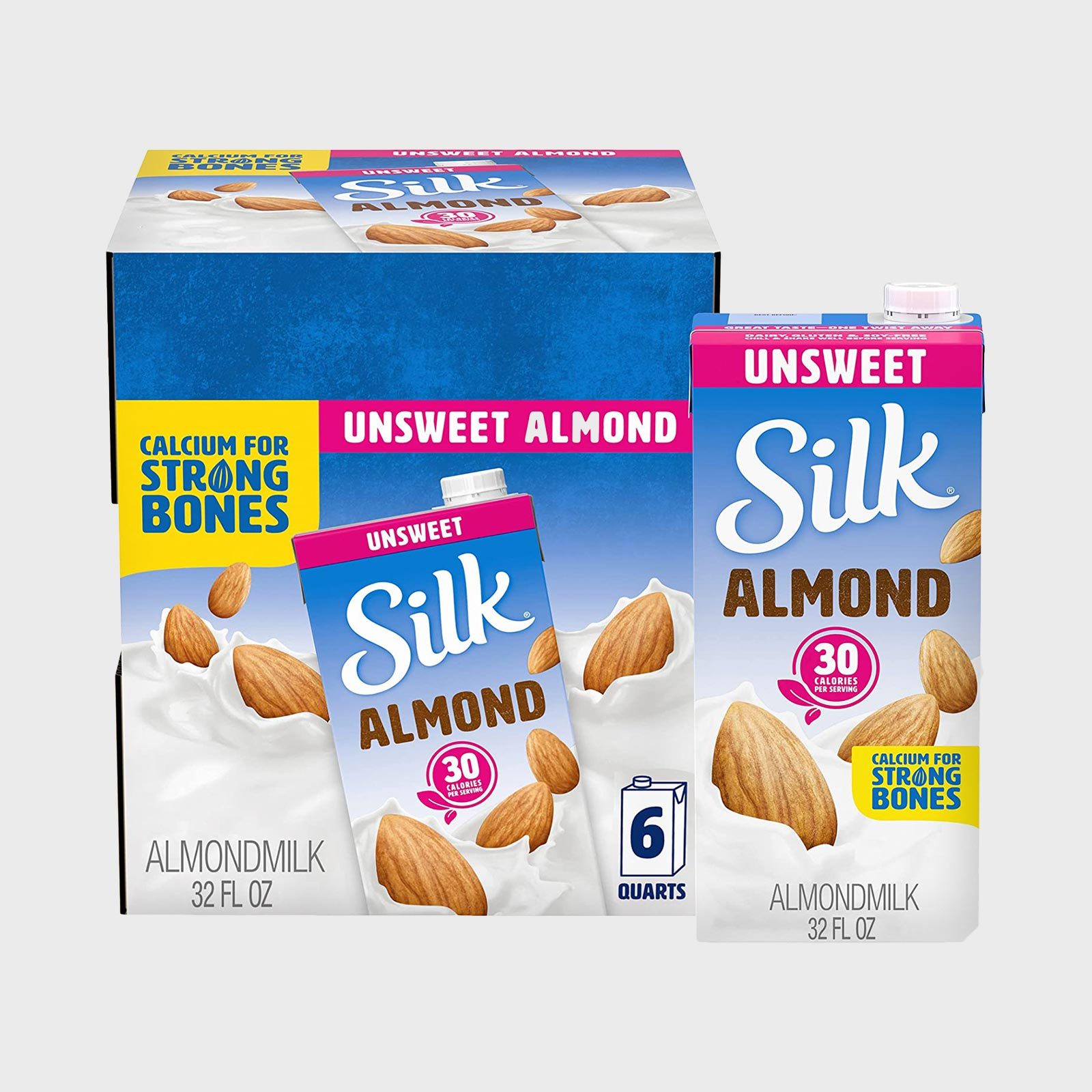 What are the benefits of almond milk?

Unlike jam vs. jelly or club soda vs. seltzer, which taste very similar but are slightly different, you’ll be able to taste and feel the difference in oat milk vs. almond milk.

Almond milk has a much thinner consistency, says Peck. Whether that’s a pro or con depends on how you plan to use your almond milk. The consistency makes it a less-than-ideal add-in to coffee or base for hot chocolate, but it’s great to drink by the glass or pour over a bowl of cereal, as Peck does.

Like oat milk, almond milk is widely available in the refrigerator section or in convenient shelf-stable packaging, which allows you to buy it in bulk and open it as needed. And it generally lasts longer than a gallon of milk in the fridge.

Nutrition-wise, the benefits of almond milk include the fact that it is free of saturated fat and typically fortified with beneficial nutrients, like calcium and vitamin D.

Here are the nutrition facts for a cup of unsweetened almond milk, according to the USDA’s FoodData Central:

“Almond milk is higher in vitamin E and has fewer calories and carbohydrates than oat milk but often has more water than actual almonds,” Peck adds. That’s what makes it an A-plus partner for cereal—but it’s also why almond milk is less useful for creamy coffee drinks.

According to a 2019 study, growing just one California almond requires 3.2 gallons of water. And that’s in a state that has dealt with serious droughts in recent years, bringing the sustainability of almond milk into question. And then there’s the fact that almond milk itself includes a good amount of water. Taken together, almond milk is a less-sustainable choice than oat milk.

Beyond the water-conservation issues, troubling research also shows that the pesticides used in U.S. almond farming are seriously harming bee populations, which can have a ripple effect across ecosystems.

What are the disadvantages of almond milk?

The biggest disadvantage of almond milk is that it is relatively unsustainable, especially compared with oat milk. “Oat milk’s popularity is because it’s healthier for the planet, requiring less water in its production than almond or dairy milk,” says Tannis.

But if you’re comparing only the nutritional downsides of oat milk vs. almond milk, consider it a draw. Both nondairy milks contain less protein and fewer nutrients than dairy milk.

Oat milk vs. almond milk: Which is healthier?

According to Peck, both oat milk and almond milk are healthy plant-based milk options. Tannis agrees. “Both are low in saturated fats and fortified with calcium, vitamin D, vitamin B12 and other nutrients to nudge their nutritional profile closer to that of dairy milk.”

The key differentiator is the additives, of which you want as few as possible. But that will vary based on brand and type of milk, so pay attention to the nutrition labels. And be sure to check the ingredients list to see if your almond or oat milk contains added sugars.

And the more water, the fewer good-for-you oats or almonds in your milk. Since almond milk tends to include more water than oat milk on average, you could make the argument that oat milk is healthier simply because it contains more oats—and their accompanying healthy nutrients—than almond milk contains almonds.

From a nutritional standpoint, Tannis holds that dairy milk is the superior sip. It’s the best option, she says, provided you can tolerate it. If you can’t, and if protein is important to you, she recommends soy milk. (Of course, there are people who are allergic to soy as well.) “It is the closest we can get to the nutrients in milk in a nondairy option,” she says.

Now that you have the skinny on oat milk vs. almond milk, see what you need to know about Diet Coke vs. Coke Zero and sorbet vs. sherbet.

The Secret Behind McDonald's Sprite

The Origin of Vanilla Flavoring

What Is White Chocolate, Exactly?

Alyssa Sybertz
Alyssa Sybertz is a lifestyle writer and food expert covering cookbooks, cooking and all things kitchen, plus healthy tips and happiness boosters, for Reader's Digest. When she's not writing about things that bring her joy, she's hiking, cooking or reading (and writing) romance. Alyssa is also the author of "The OMAD Diet."
Now Trending
This Inexpensive Curl Cream Has Nearly 30,000 Reviews—Here’s Why Shoppers Love It
If You Don’t Eat Blueberries Every Day, This Might Convince You to Start
How to Ripen Avocados in Just 2 Minutes