Why say "excuse me" when you could croon "mind the grease?" OK, we can see why that one fell out of favor. 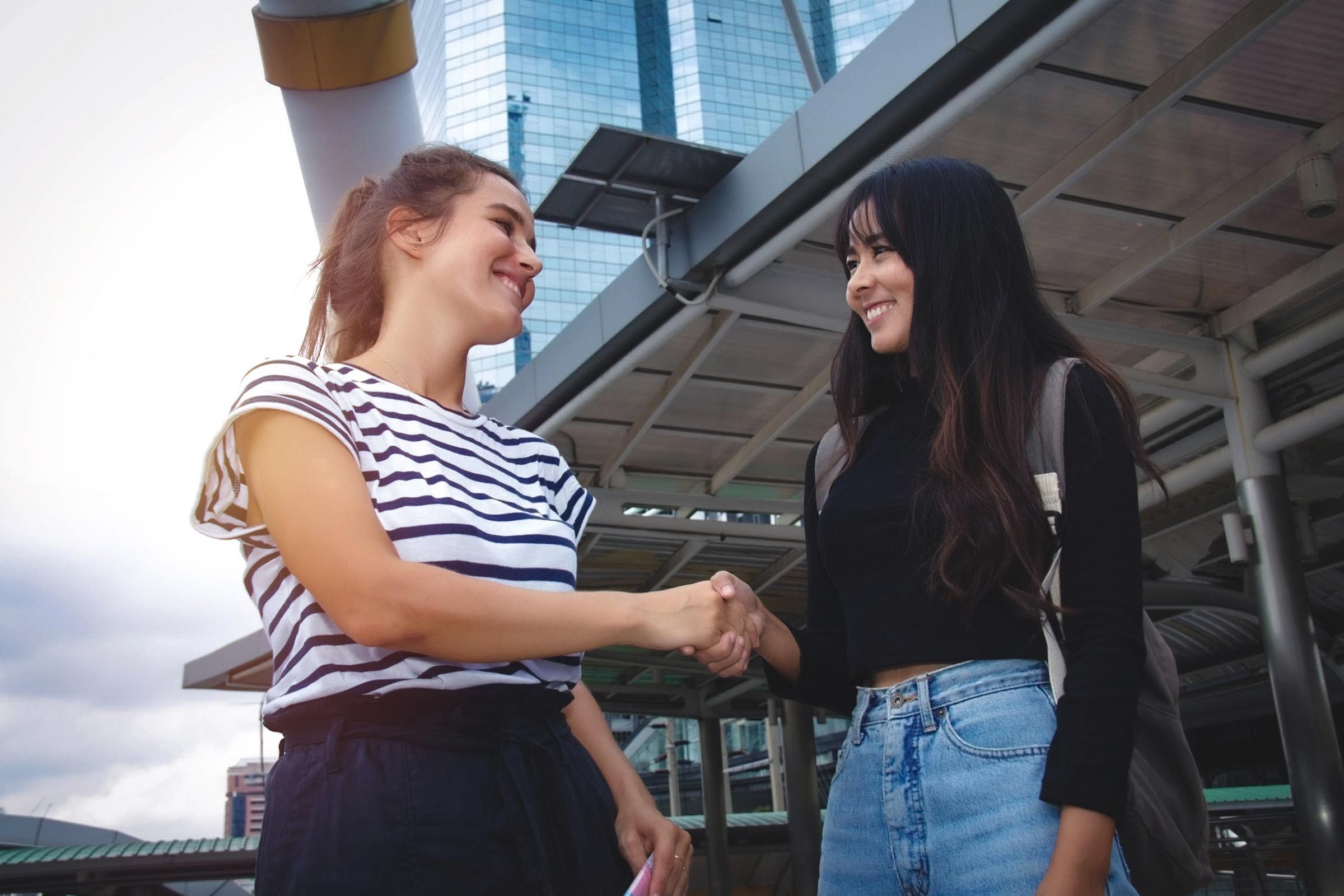 This used to be one of the most commonly exchanged pleasantries, says Cathy Hellier, a historian at The Colonial Williamsburg Foundation and expert in historical etiquette. But today, unless someone is sarcastically shouting “and a good day to you!” after a rude encounter, it’s rare to hear someone cheerfully end a conversation with this. Instead of offering well wishes it’s more common now to end with a casual “see you later” or simply “bye.” Do you know the new etiquette rules? Follow these 50 tips for perfect manners.

If one was suspicious of another’s motives they might have greeted them with this strange pleasantry, according to Andrew Forrester’s 1909 etiquette tome Passing English of the Victorian era a Dictionary of Heterodox English, Slang, and Phrase. This phrase came from dog sellers who tried to pass off mutts as purebreds—a practice so common that it came to symbolize any type of dubious encounter with another, he wrote. Here are more uncommon words we don’t say that often anymore.

This polite phrase was frequently used in previous generations as a way soften a request, making it seem like more of an invitation than a demand, Hellier says. These days, however, forthrightness is valued and using “if you please” may be seen as giving the other person an out that you didn’t intend. Instead, most people now say, “Could you please?” It’s a direct request but still polite.

A common pleasantry is to ask what someone is up to at the moment. In the Victorian era, just like today, people often came up with funny euphemisms to describe their activities. For instance, today you might say you’re “taking the kids to the pool” if you need to use the bathroom. Similarly, back then, if you replied that you were “just powdering my hair” it meant you were on your way to get good and drunk, according to Forrester. Think that’s funny? Check out 12 of the most hilarious things moms have said.

An apology was once considered a staple of polite society but it’s falling out of favor—and not entirely for bad reasons, says Sharon Schweitzer, J.D., a modern manners expert, attorney, and founder of Access to Culture. In the past, it was used more of an expression of empathy but today it may be seen as a sign of weakness or confusion, she says. “Many coaches have recommended that women, especially, reduce the number of times that they start a sentence with ‘I’m sorry, but…’ and use more confident language instead,” she explains. Find out 14 more things confident people never do.

When someone asks you how you are doing and you’re not doing great, what do you say? In our society that prefers to keep pleasantries rather sterile, you’d probably say something like “Been better, haha” or “I’m OK.” But in the Victorian era they got straight to the punch with the colorful “not up to dick,” Forrester wrote. Make sure you erase these 12 surprisingly offensive words from your vocabulary right now.

“This gracious phrase was often used after ‘thank you’ and in conjunction with ‘you’re welcome’ but it is seldom used today,” Schweitzer says. Instead, these days the standard reply to ‘thank you’ is usually ‘no problem,’ a phrase Schweitzer finds unfortunate. “It’s much too informal and, depending on the tone of voice, may even come across as snide,” she says. Plus, it tells the other person that you might have found their request problematic in the first place rather than being happy to help out.

Today when you pass someone on a crowded sidewalk, you usually offer a polite “excuse me” or “pardon” but in the Victorian era a common pleasantry to say the same thing was “mind the grease,” according to Forrester. Why? It may be because the person was hoping to slide through the crowd smoothly as if they were greased. We can be pretty weird in modern times too. Check out these 37 hilarious phrases parents say to avoid cursing in front of children.

Many old pleasantries are based on outdated notions of social standing and class stratification, Hellier says. This included greeting a man with the formal “Sir,” acknowledging his higher standing. It was so prevalent that children used to even address their fathers as “Sir,” she says. Today, however, we prefer a more egalitarian approach and often dislike titles that call attention to social class differences, she explains. Outside of the military or some service industries (like a waiter at a high-end restaurant), this formality is almost never used anymore.

Old movie buffs will recognize the iconic greeting for women, complete with a deferential head tilt. However, this gender-specific acknowledgment may be going the way of the old Westerns that made it so popular, Schweitzer says. “You may still hear it in some places in the South and in the military but in most other parts of the USA, ‘ma’am’ may not always be appreciated,” she says. Why? One reason is it may make women feel as if they are being called old, a particular insult in a society that prizes youth or at least looking youthful. This is one of the 10 social etiquette tips everyone should know.

Similarly, addressing a woman as “Mrs.” or “missus” is also increasingly seen as old-fashioned, and not in a cute way, Schweitzer says. Not only do these words presume gender but they are also dependent on identifying the woman by her marital status, something she may not want. In addition, “Miss” can make a woman feel as if she’s being seen as younger or talked down to. “Mrs. or Miss are not appropriate titles to use in professional settings in the United States,” she says. “Ms. is the preferred title unless someone specifically tells you otherwise.”

“I’m glad to see you Cousin”

In the 18th century it was very common to address someone by their relationship to you, Hellier says. For instance, a woman would call her spouse “Husband,” two close acquaintances would greet each other with “Hello, Friend,” or a child might address an adult relative as “Uncle”—instead of using the person’s given name. Whether it felt too cute or simply got too confusing, the default today is to always use the person’s name. The one exception is that children still usually call their parents Mom or Dad.

“Well that takes the egg”

What is the proper pleasantry to use to show excitement or happiness when someone shares some good news with you? Today you might say “That’s awesome!” or “Well done!” If you lived in the 18th century, however, you’d reply “Well, that takes the egg!” Forrester wrote. Maybe it sounds better in a British accent?

“How are you enjoying the afternoon?”

People used to exchange pleasantries about their day not just as a social convention but as a way to see how the other person is doing and, as such, would ask more specific questions about their well-being, Schweitzer says. Now, in the day of Instagram and Facebook, it’s often assumed you know how someone is doing and if you don’t then you should look it up. “Today people use the rote, ‘How are you?’ which almost always receives the standard response of ‘Fine’,” she says, adding that because the questioner really doesn’t expect an honest answer this pleasantry does nothing to build relationships.

Raise your hand if you did a mental curtsy reading that sentence. If you did, it’s because it’s so often used in portrayals of royalty or high-class societies of yesteryear, Hellier says. This formal greeting, however, has mostly disappeared in favor of the casual-but-friendlier “How are you?” or “What’s up?”

“Signing ‘Your humble servant’ or ‘Your most obedient servant’ were polite greetings among the gentry and middling sorts and originated as a form of gracious condescension,” Hellier says. It was never used by actual servants but rather as a way for one person to show deference and goodwill to a person they saw as having similar or slightly lower standing, she explains. These days? Most letters are signed automatically with an email signature or a quick “thanks” or “love” but many times they’re not signed at all. Sometimes, the meaning of words and phrases do a 180, like these 11 old insults that turned into compliments.