14 Amazing Photos of Cheetahs in the Wild

These big cats are ready for their close-ups! Here’s a glimpse of what life is like for cheetahs in their natural habitats. 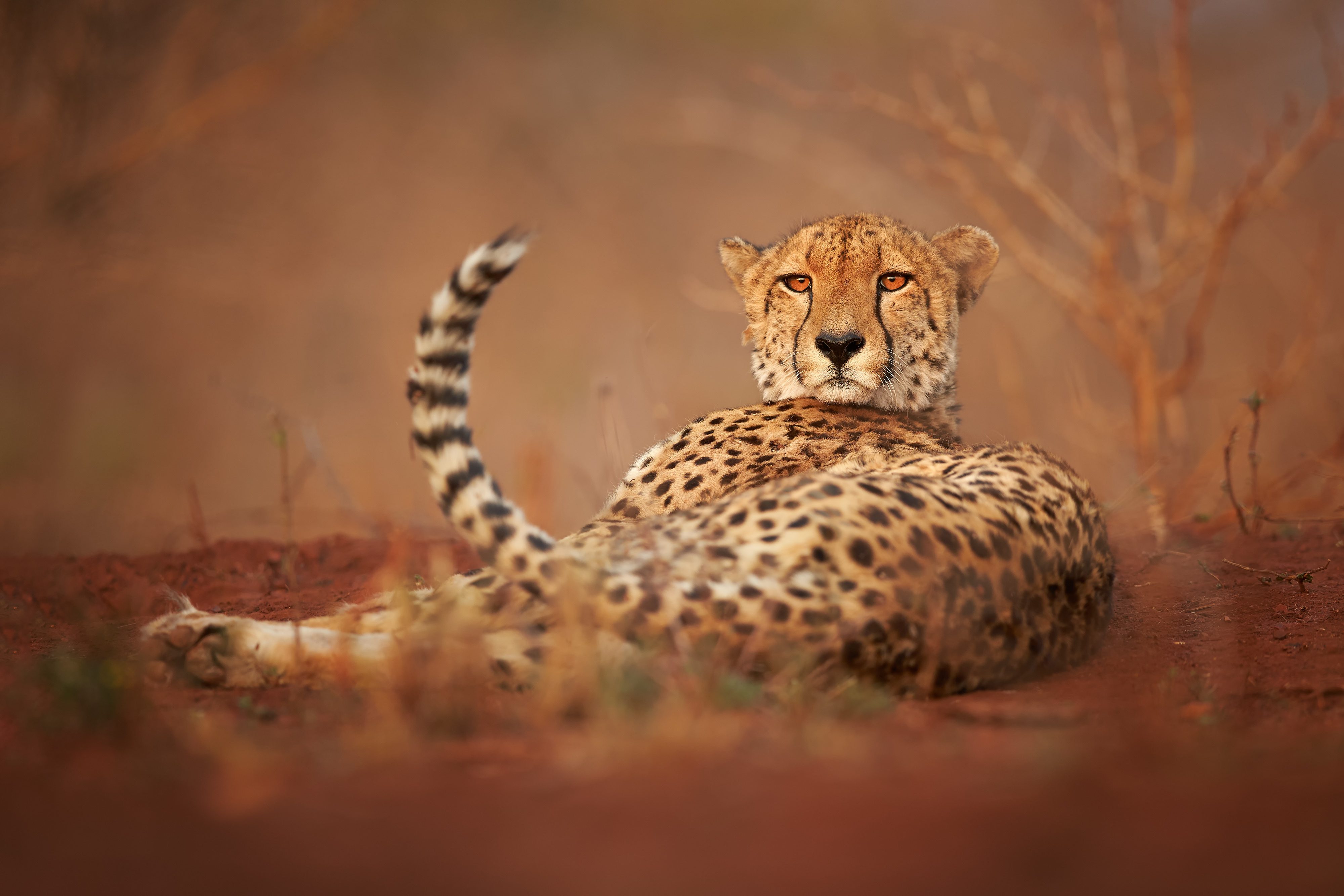 Not your average cat

The world’s fastest land animal takes some pretty dashing photos, especially when the spotted racers slow down enough for the camera to capture them. We’ve collected these 14 cheetah photos for you to admire and added some fascinating facts about these gorgeous animals you probably never knew. Ready, set, go! 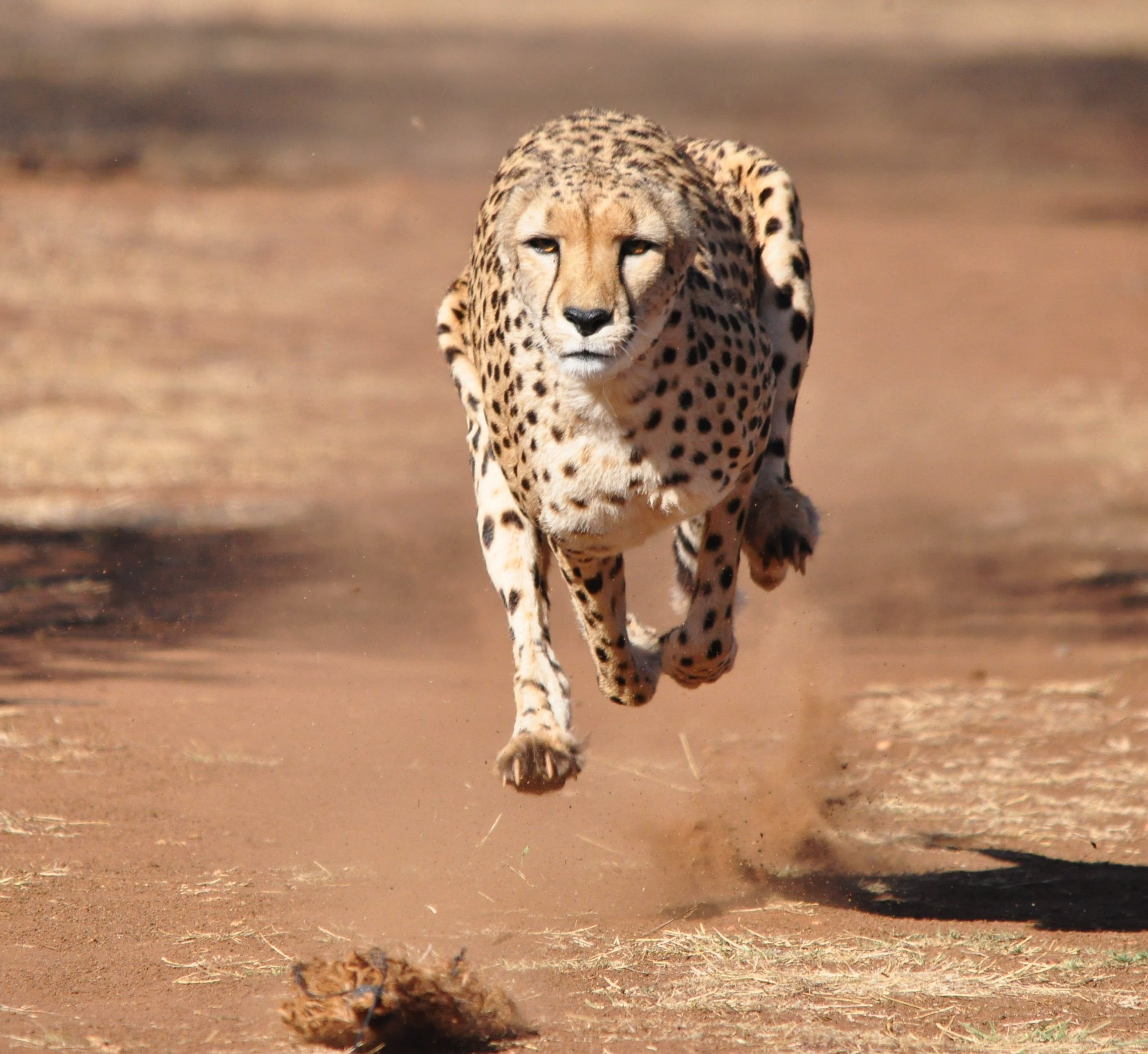 Faster than a speeding car

National Geographic reports that cheetahs can accelerate faster than many cars. Believe it or not, they can go from zero to 60 miles per hour in just three seconds. Cheetahs use their speed and their ability to make quick turns to successfully pursue their prey. Here are another 10 animals with real superpowers that would make superheroes jealous. 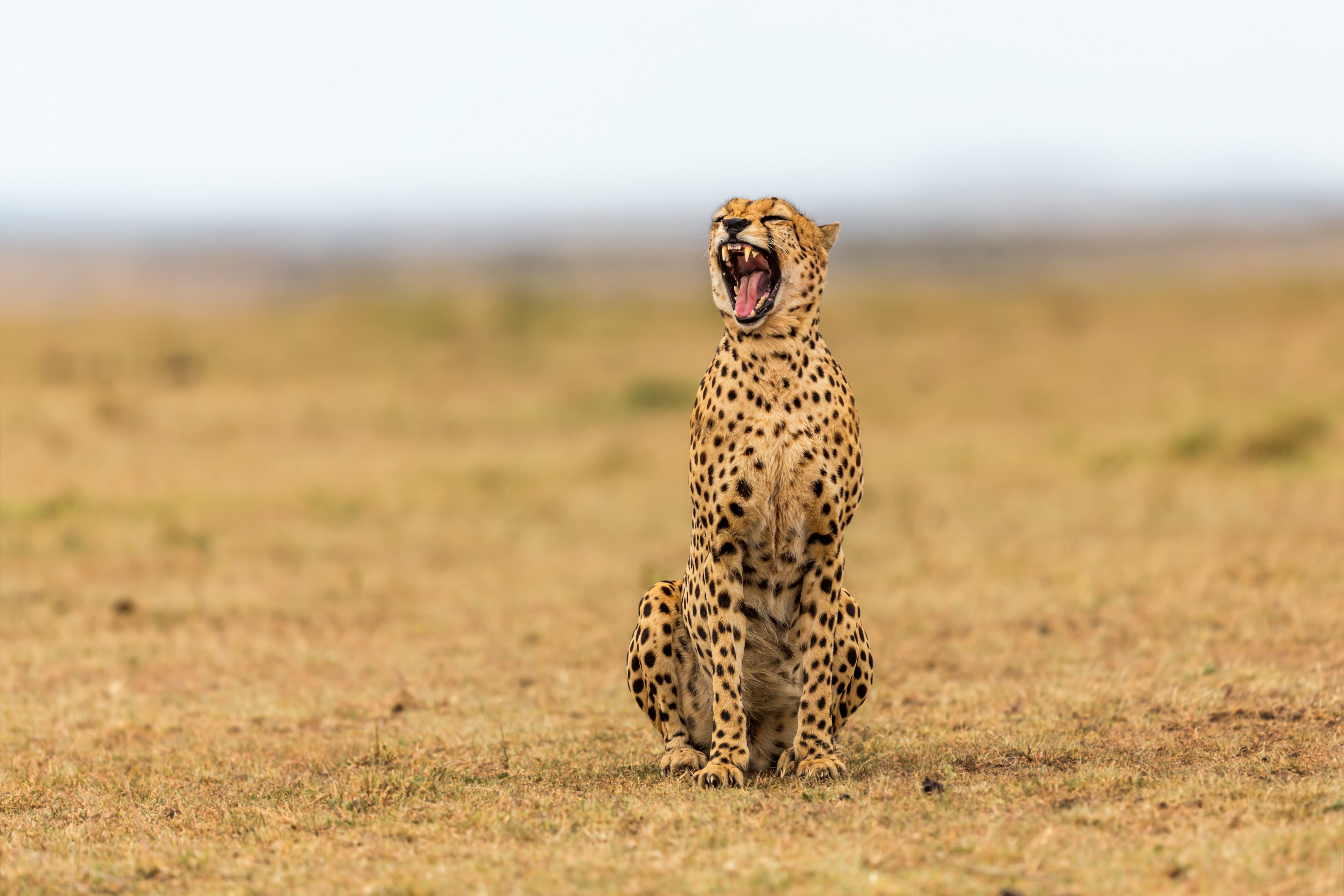 Cheetahs do need to rest frequently, though, as all that speed exerts a lot of energy. They can turn from speeding hunters into yawning kitties in almost an instant. Though they excel at yawning, cheetahs are the only members of the big cat family that don’t roar. While the cheetah is certainly faster than you, these 12 animals are probably smarter than you. 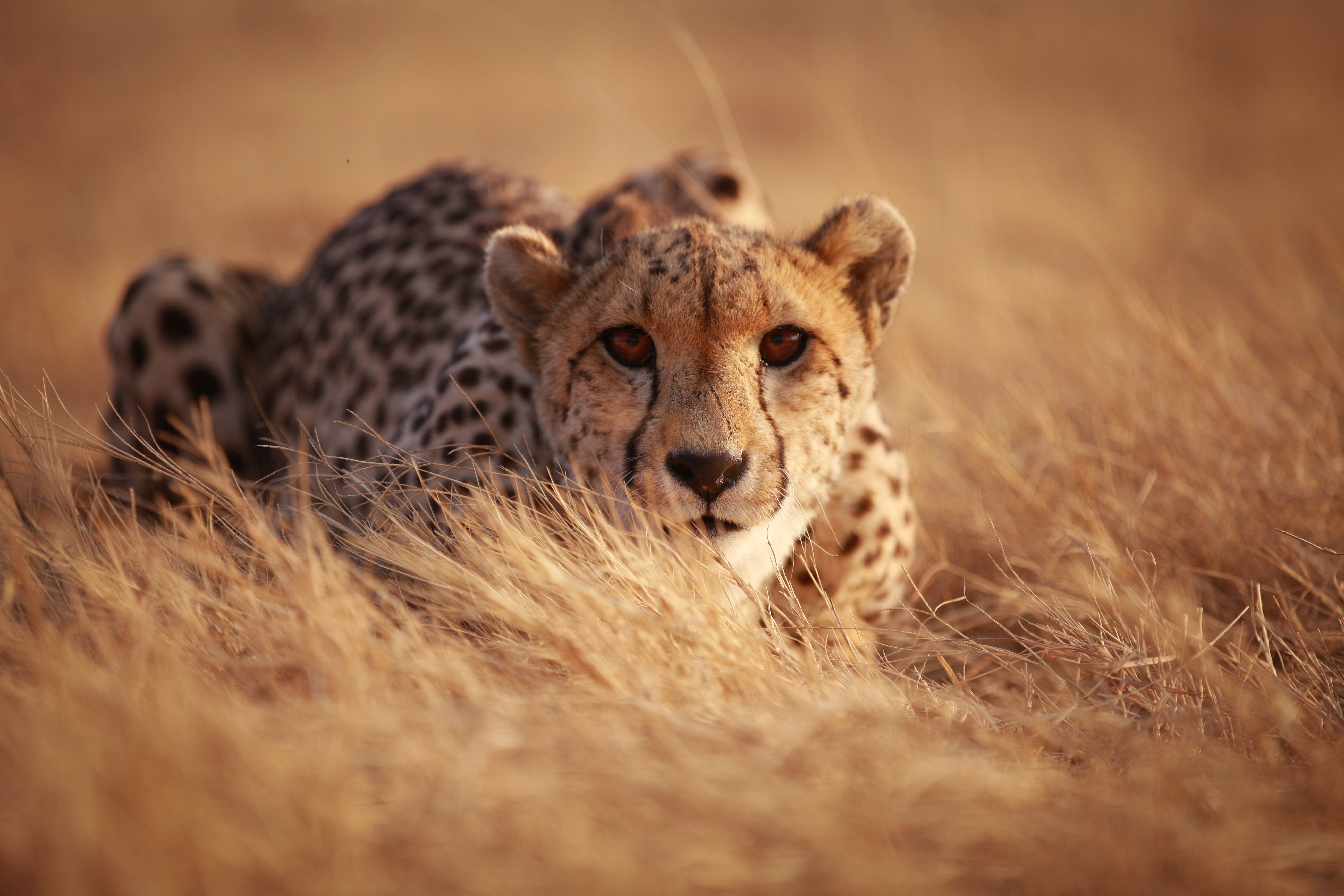 Cheetahs have spots that help them blend in with their surroundings so they can sneak up on prey. They also have a kind of racing stripe—the distinctive black strips that run from the corners of their eyes down to the corners of their mouths. These stripes, called tear stains, allow the day-hunting cheetah to see better in the bright sun, just like football players who put “eye black” under their eyes. Don’t miss these other fun facts about animals you probably didn’t know before. 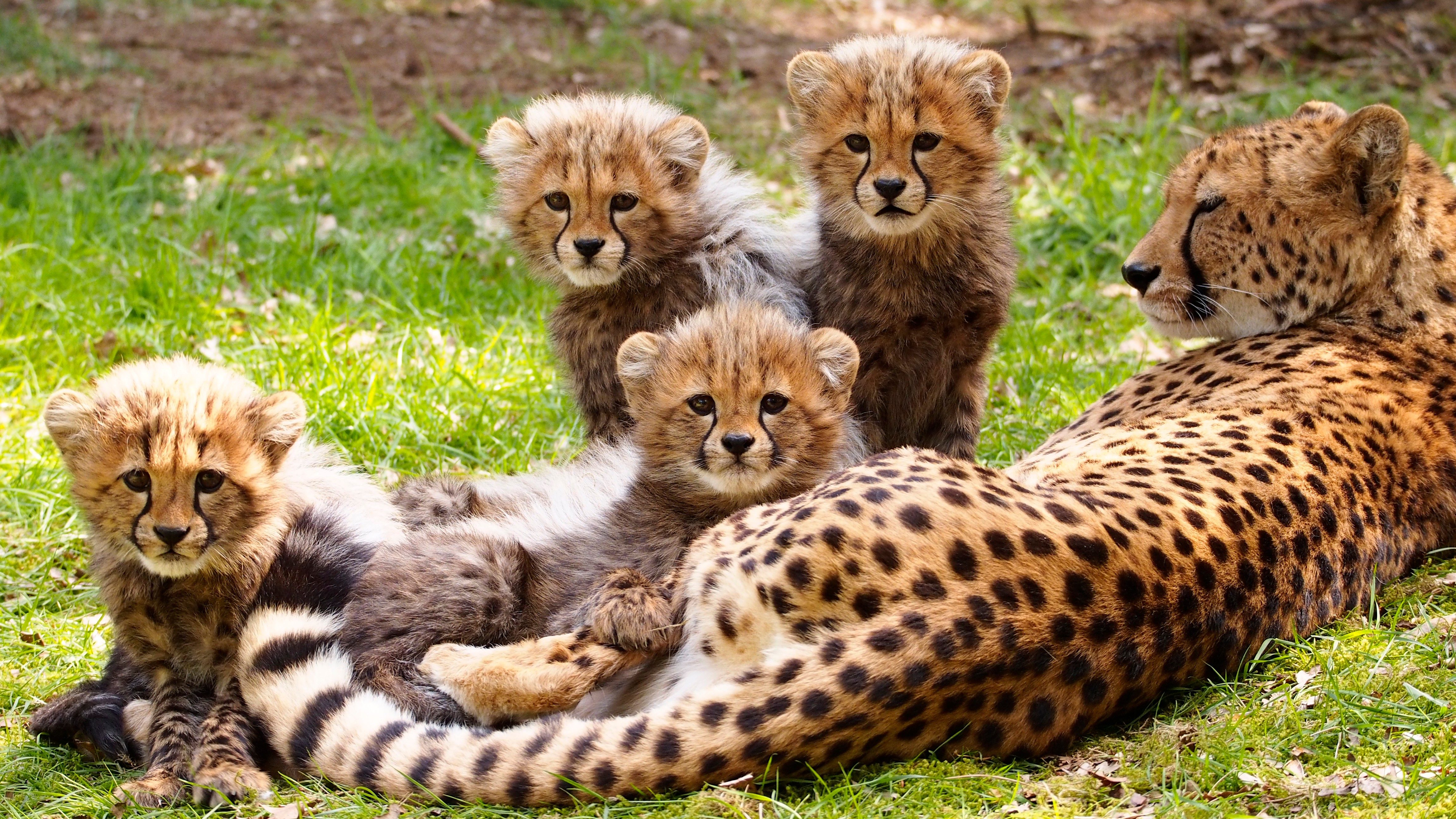 Although cheetahs are cats, baby cheetahs are called cubs rather than kittens. Only 5 percent of cubs survive to adulthood, according to the African Wildlife Foundation. A typical litter consists of three to five cubs, and the mother and her young live together for 18 to 24 months. Cheetah mothers need to move their litters to a new spot every four days so that predators can’t follow their smell, reports the World Wildlife Fund. That’s a bit of a pain for the first few weeks because cheetahs aren’t one of these 10 animals that can walk minutes after they’re born. 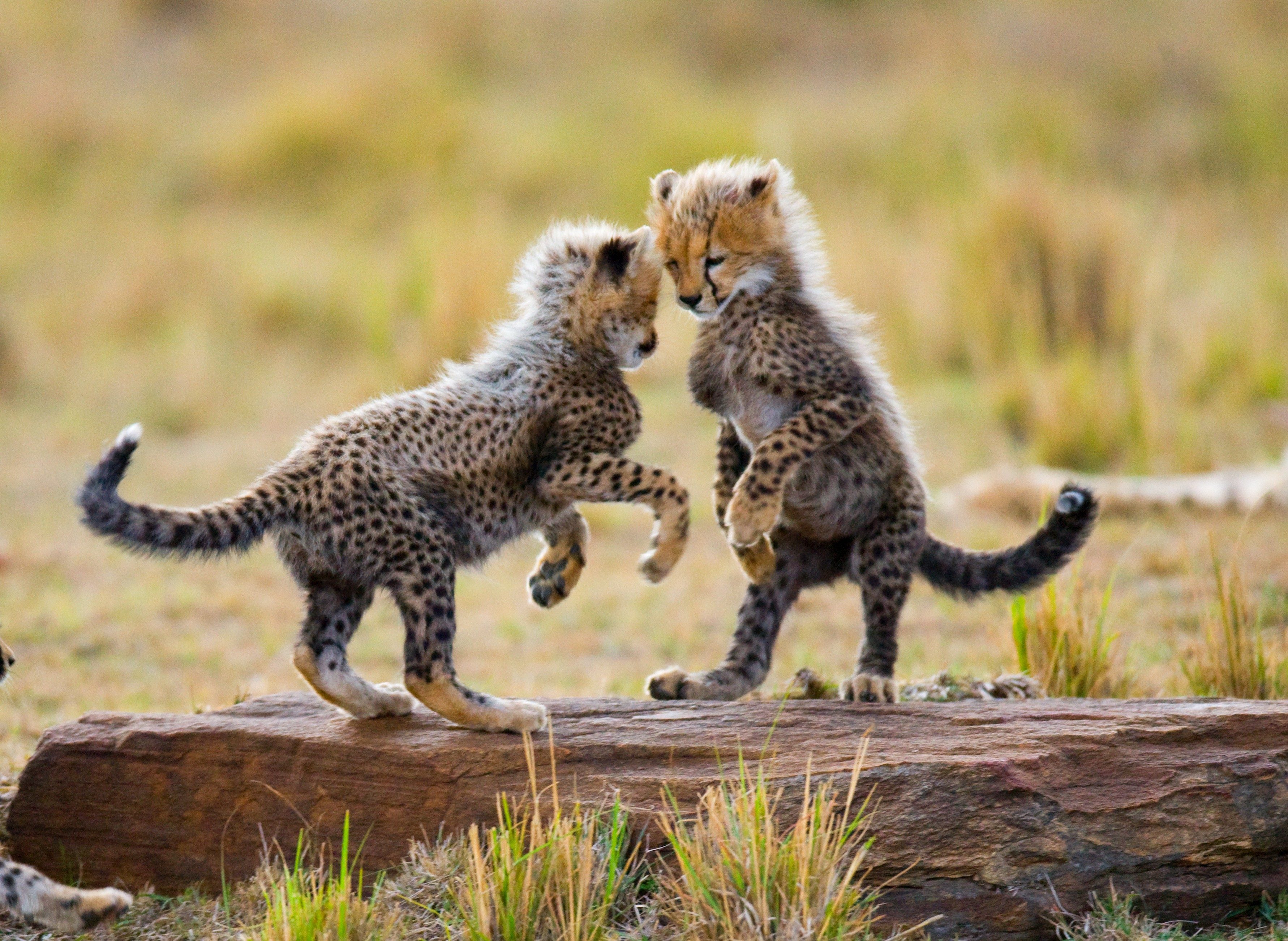 Learning how to hunt is an essential skill that mothers teach their cubs. As with the young of almost all species, learning essential skills is best done through play. It takes about 18 months until the cubs are able to hunt on their own and are ready to leave their mothers. Cheetah siblings from the same litter often live together for about six months after that, before the females leave to live alone until they have cubs of their own. Brothers, on the other hand, stay together their entire lives in what is called a coalition. Here are another 27 hilarious (but totally real) names for groups of animals. 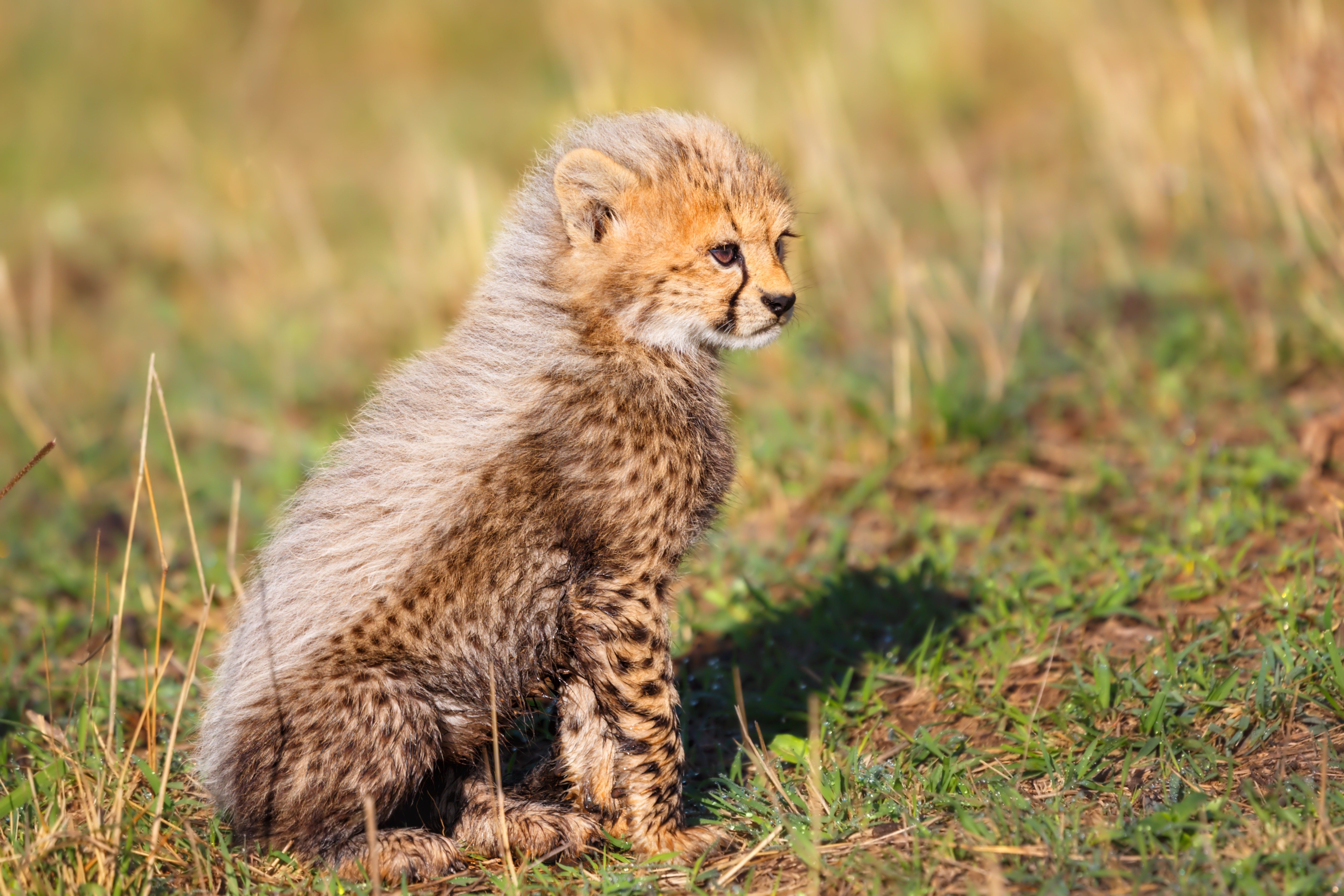 Now that’s quite a mantle

When cheetahs are born, they have a fluffy coat to protect them from predators, called a mantle, according to Lion World Travel. They gradually shed this grayish coat as they age, and grow in their shorter spotted fur. During the transition, cheetahs sometimes look like they’ve cut their fur into a mohawk, as with this 7-week-old cub. For more animal cuteness, here are 60 of the most adorable animal photos that will make you say “aww.” 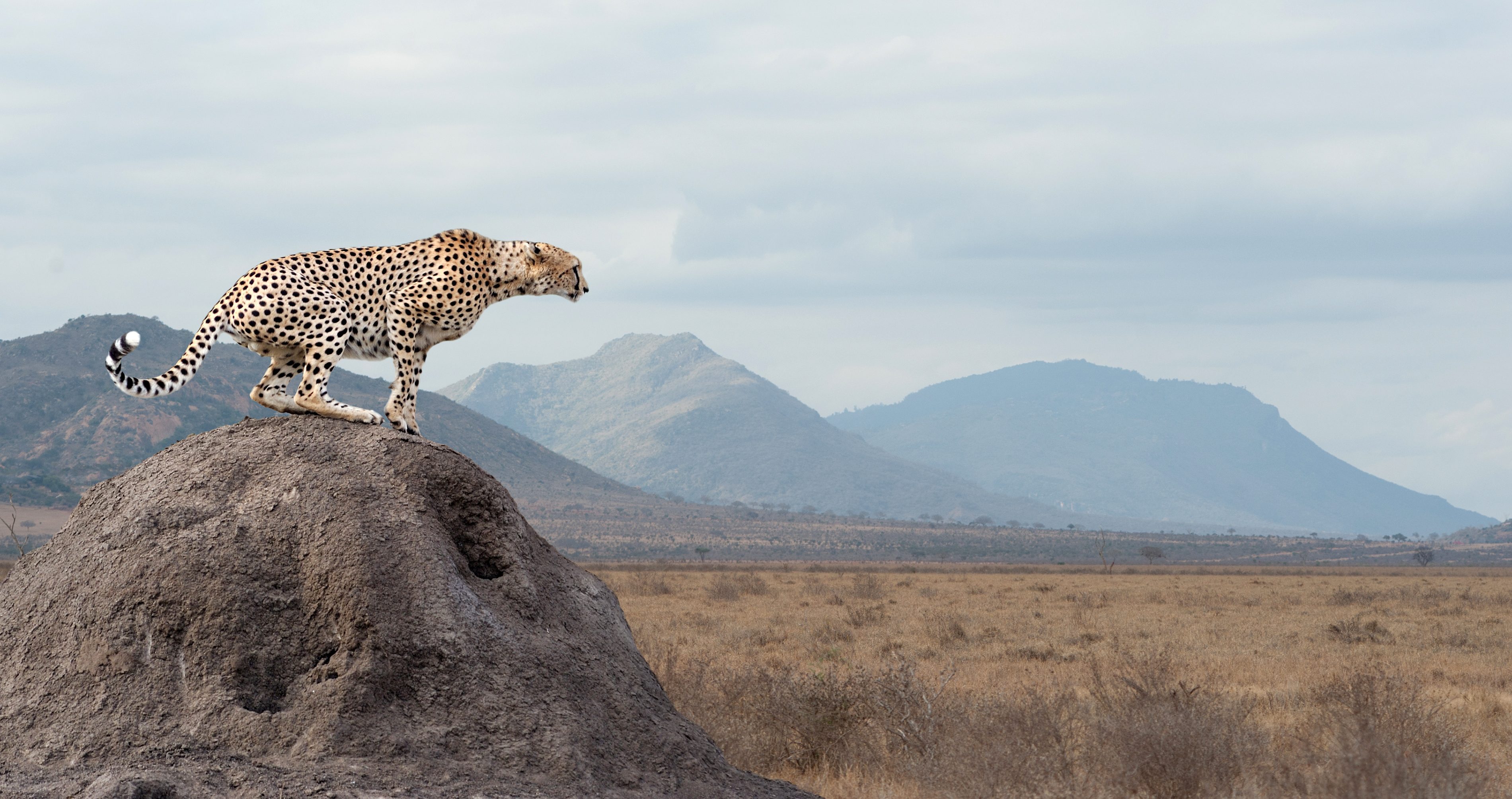 Cheetah populations are in decline, according to the Cheetah Conservation Fund Canada. It is estimated that only 7,100 remain today, most in the savanna grasslands of eastern and southwestern Africa, in countries like South Africa, Namibia, and Kenya. Western Africa, predominantly Niger, also has a cheetah population. The Asiatic cheetah still exists, but only in remote areas of Iran. This is a stark contrast from the last century. Experts estimate that in 1900, there were more than 100,000 cheetahs throughout most of Africa, the Arabian Peninsula, and India. The statistics are equally staggering for these 14 wild animal species that are also endangered. 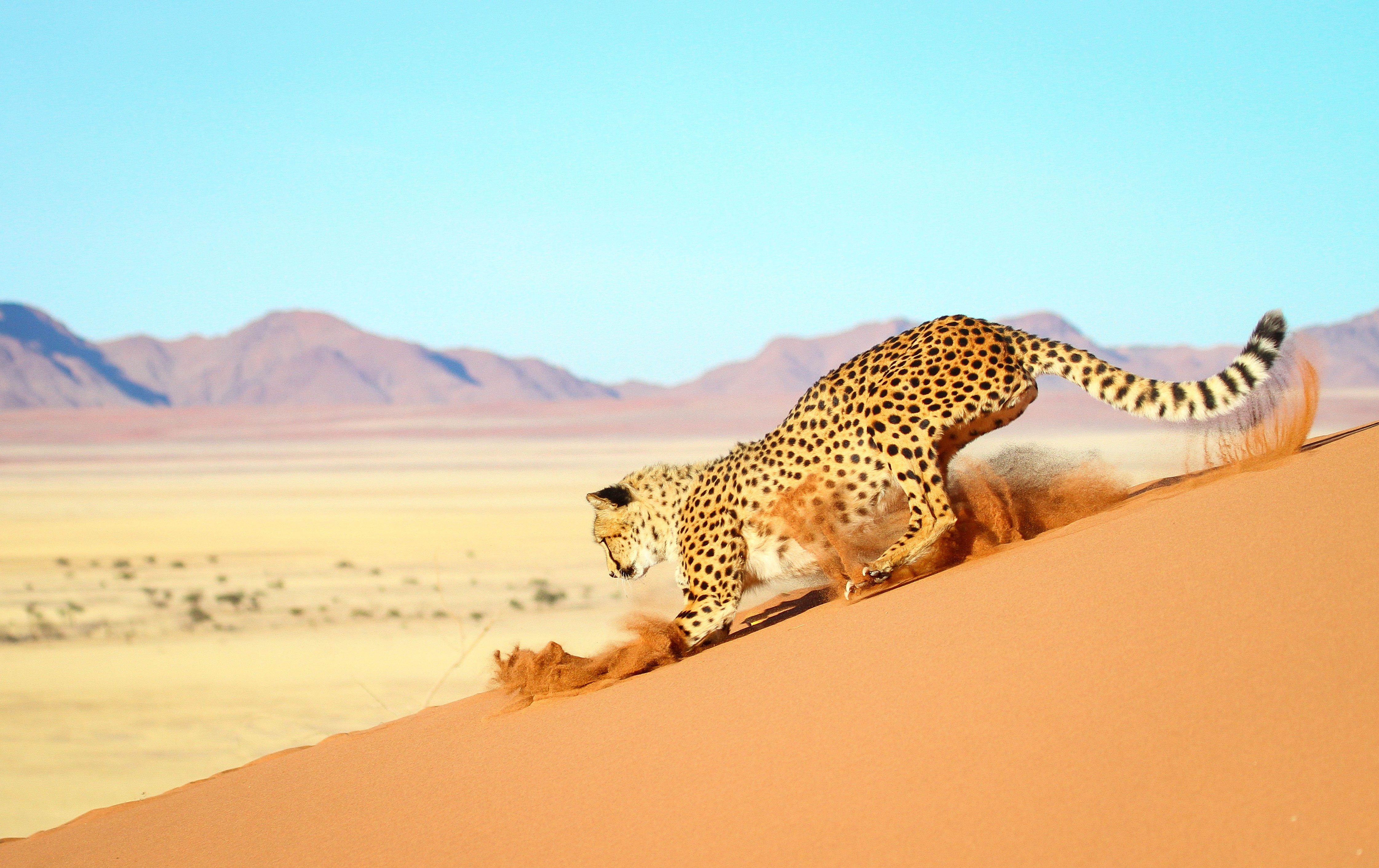 Cheetahs are at risk because of humans. Their population plummeted in the 1970s when European settlers in Africa deemed them as vermin and a risk to their farm animals. The African Wildlife Foundation says that the current habitat of the cheetah is only 11 percent of its historical range.

The cheetah in this photo is on one of the red sand dunes in Namibia’s Namib Desert, which is home to some of the world’s largest sand dunes. The dunes are one of these 15 natural wonders you’ve (maybe) never heard of. 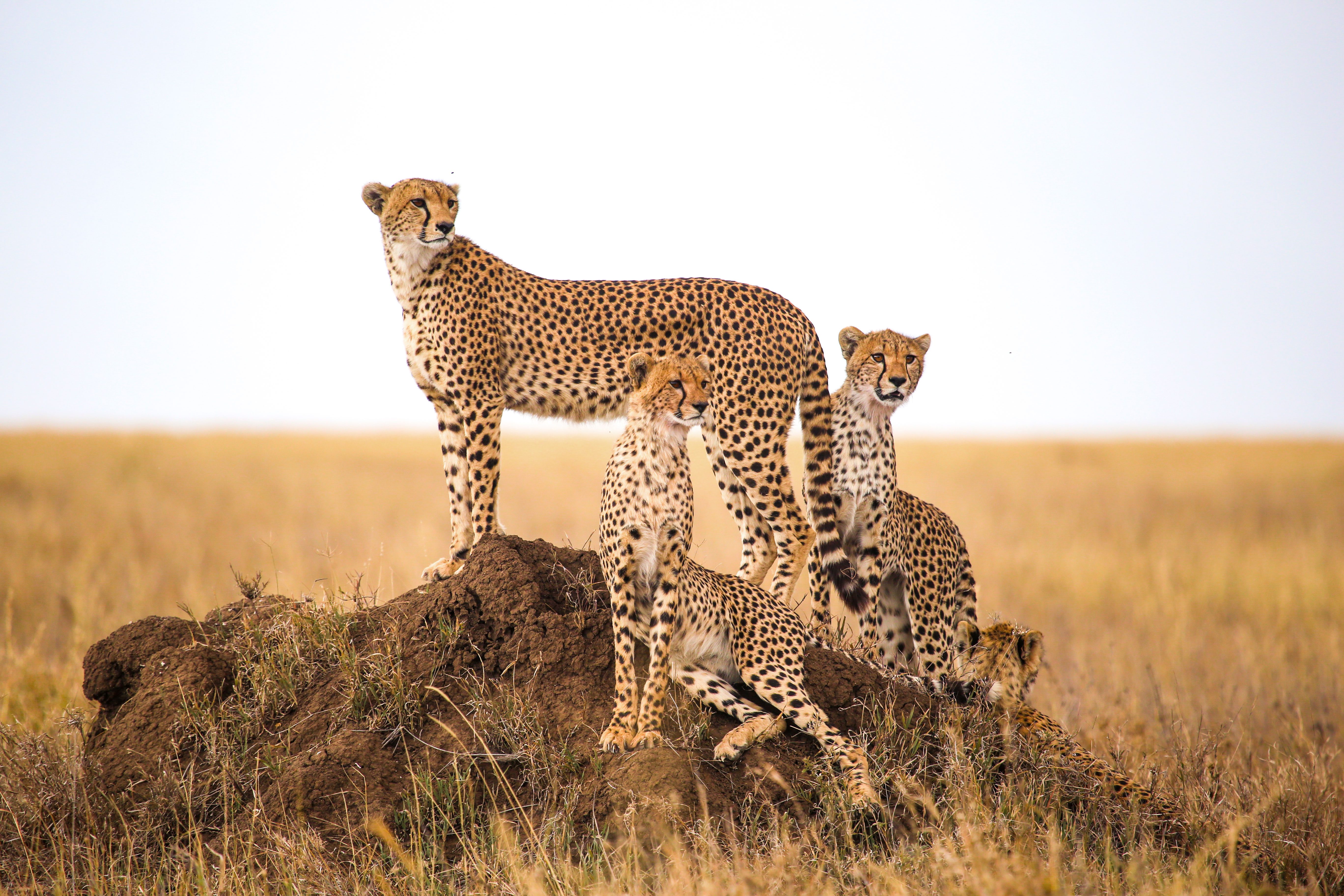 The better to see you with, my dear

Cheetahs have sharp daytime eyesight. In fact, they can see distances of more than three miles during the daytime, essential for hunting prey. Cheetahs don’t see well at night, though, unlike most of their big cat cousins. Big cats like lions and tigers have better night time eyesight than cheetahs and can hunt at any time of the day or night. By the way, these are the most endangered tigers in the world. 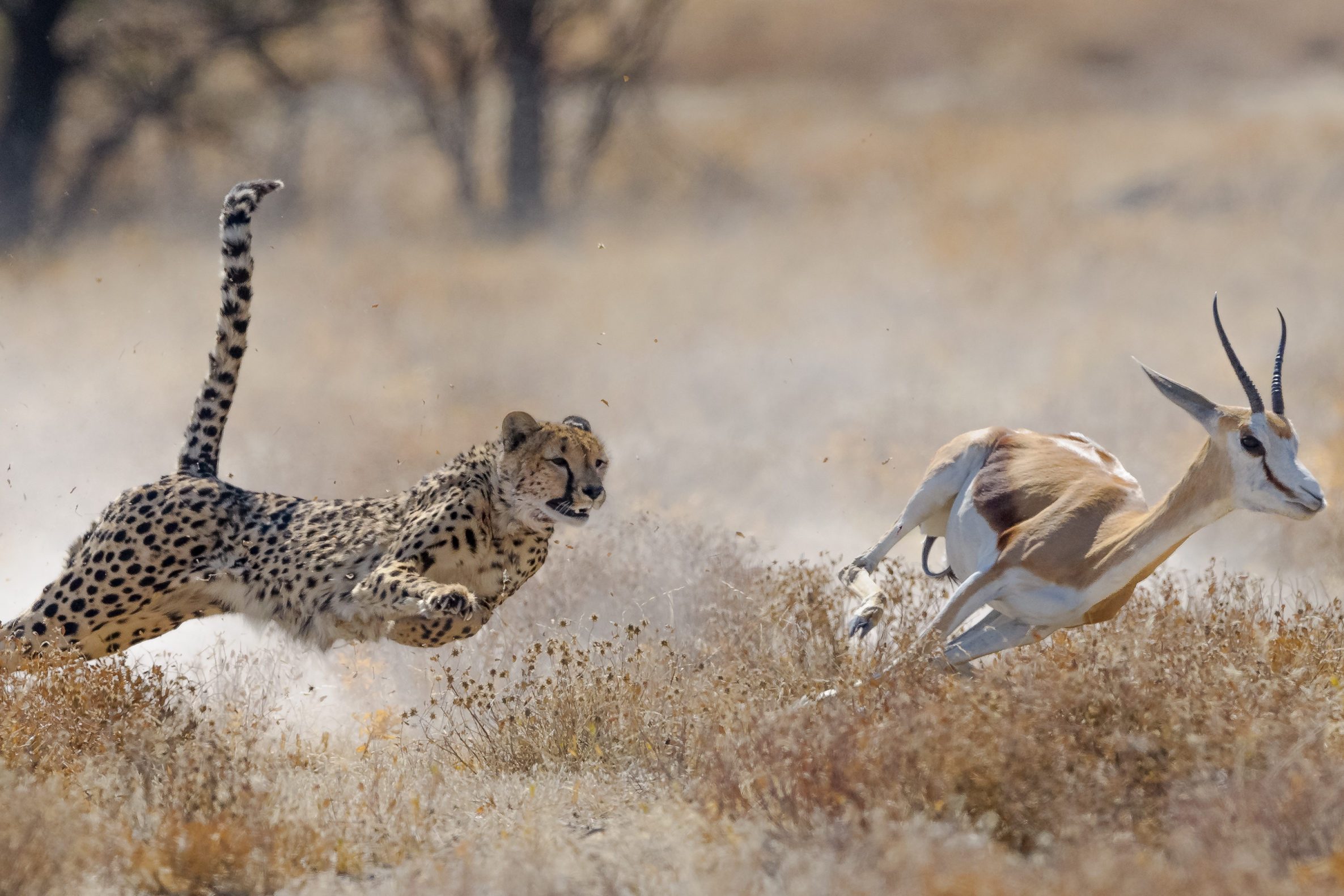 Cheetahs can run at speeds up to 76 miles per hour, but only for 500 yards or so, says Sciencing.com. The body temperature of cheetahs rise quickly when they run, reaching 105 degrees Fahrenheit. At that point, cheetahs must rest or risk overheating. Because there’s nothing cuter than a sleeping animal, you really need to see these pictures of adorable animals that can fall asleep pretty much anywhere. 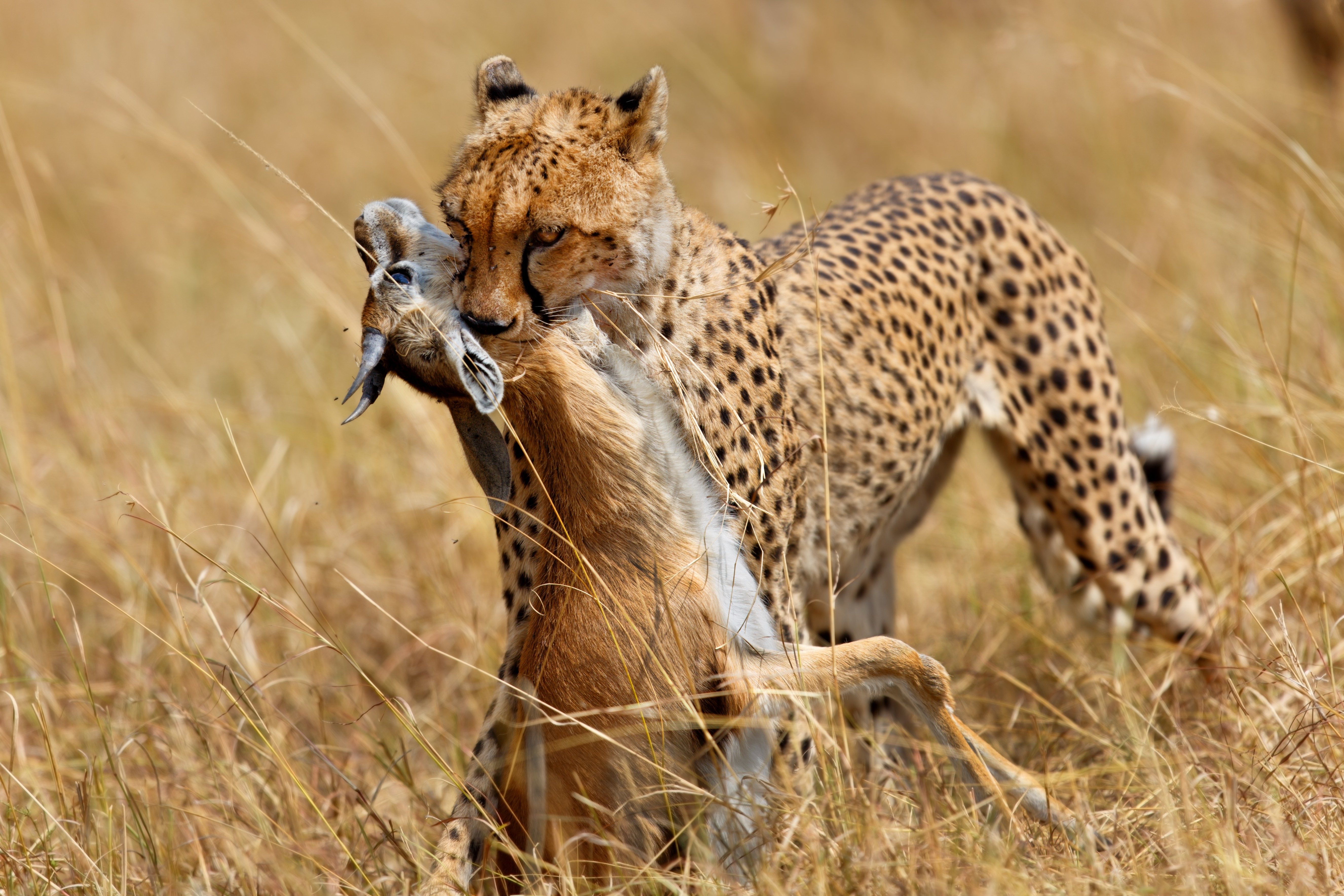 The diet of a cheetah is almost exclusively meat. They frequently eat antelopes like gazelles, springbok, and impalas, according to Macroevolution.net. Thomson gazelles, like the one captured in this photo, are one of their favorites. Thomson gazelles can run about 40 miles per hour, easily outmatched by a cheetah at close range. When cheetahs aren’t successful at catching mammals, they eat birds and lizards. While you definitely wouldn’t want to get up close and personal with a cheetah, you might be surprised to learn that these 15 innocent-looking animals are a lot more dangerous than you think. 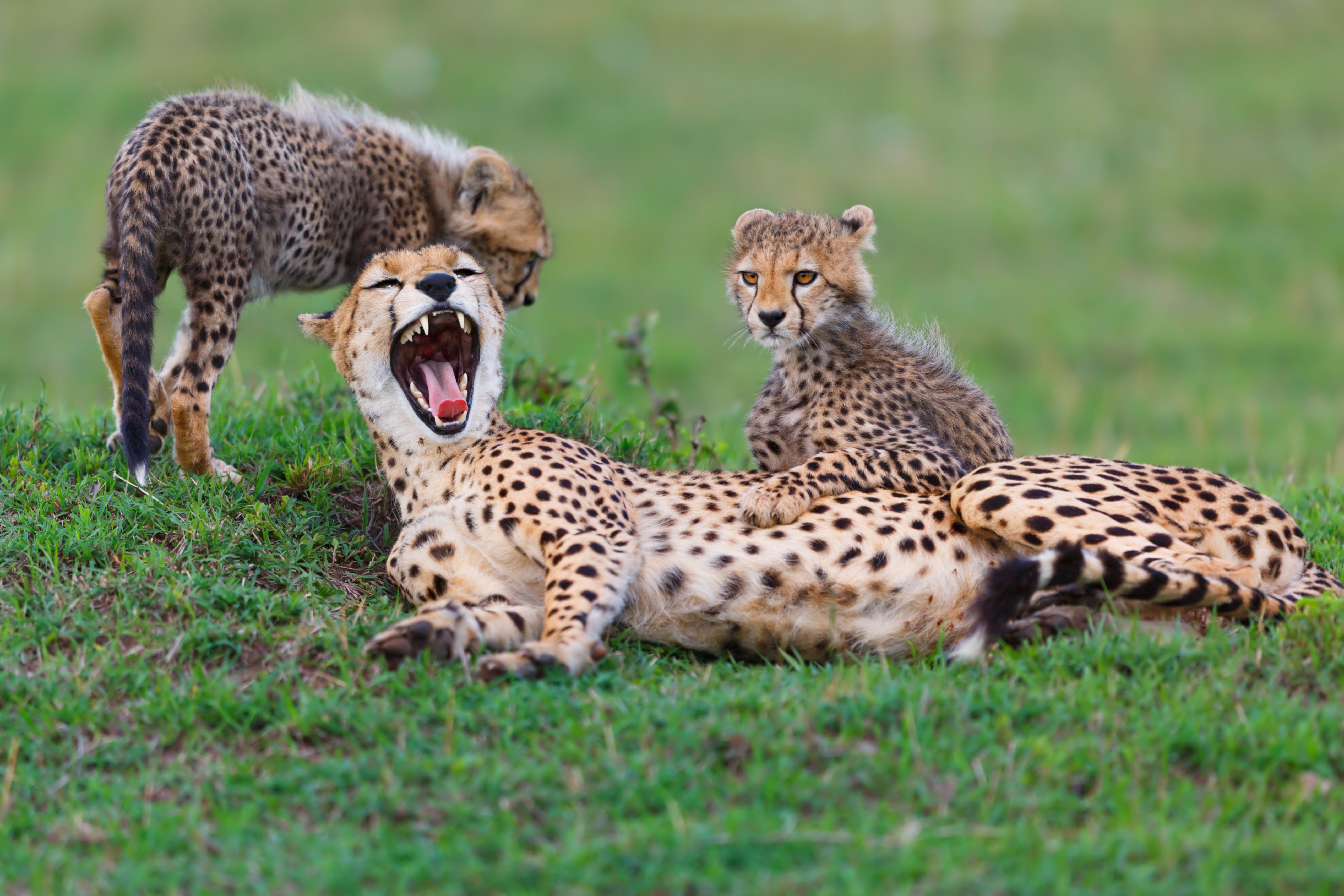 Animals yawn for different reasons. Science Focus reports that some animals, like penguins, yawn during courtship. Others, like baboons and guinea pigs, yawn as an indication of aggression. Animals like cats yawn as they transition between sleep and being alert, to help cool their bodies and brains and to stretch their jaw muscles, according to DocAndPhoebe.com. Humans yawn for all sorts of reasons, including because of this word that makes 55 percent of people yawn when they read it. 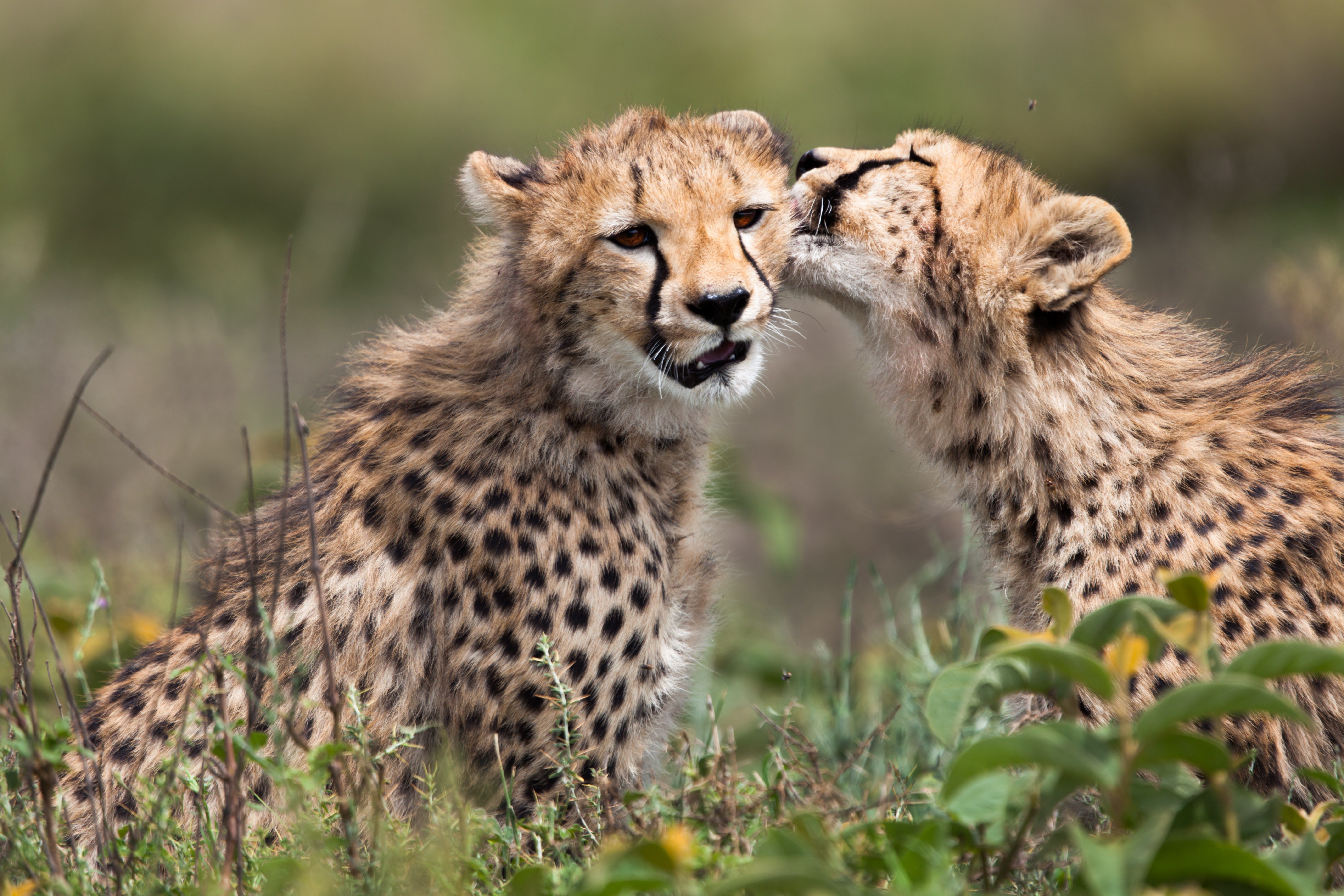 In addition to yawning, cheetahs exhibit other behaviors that might seem human-like. An example is this photo, which looks like a cheetah giving his sister a kiss. More likely, though, she had a little bit of leftover dinner on her ear that he was helping her get rid of, or perhaps he was mimicking his mother, who cleans her cubs by licking them. Regardless, it makes for a pretty cute pic. Here are another 17 adorable pictures of baby animals you’ll love instantly.