Who knew ending your text messages with periods was such a crime? 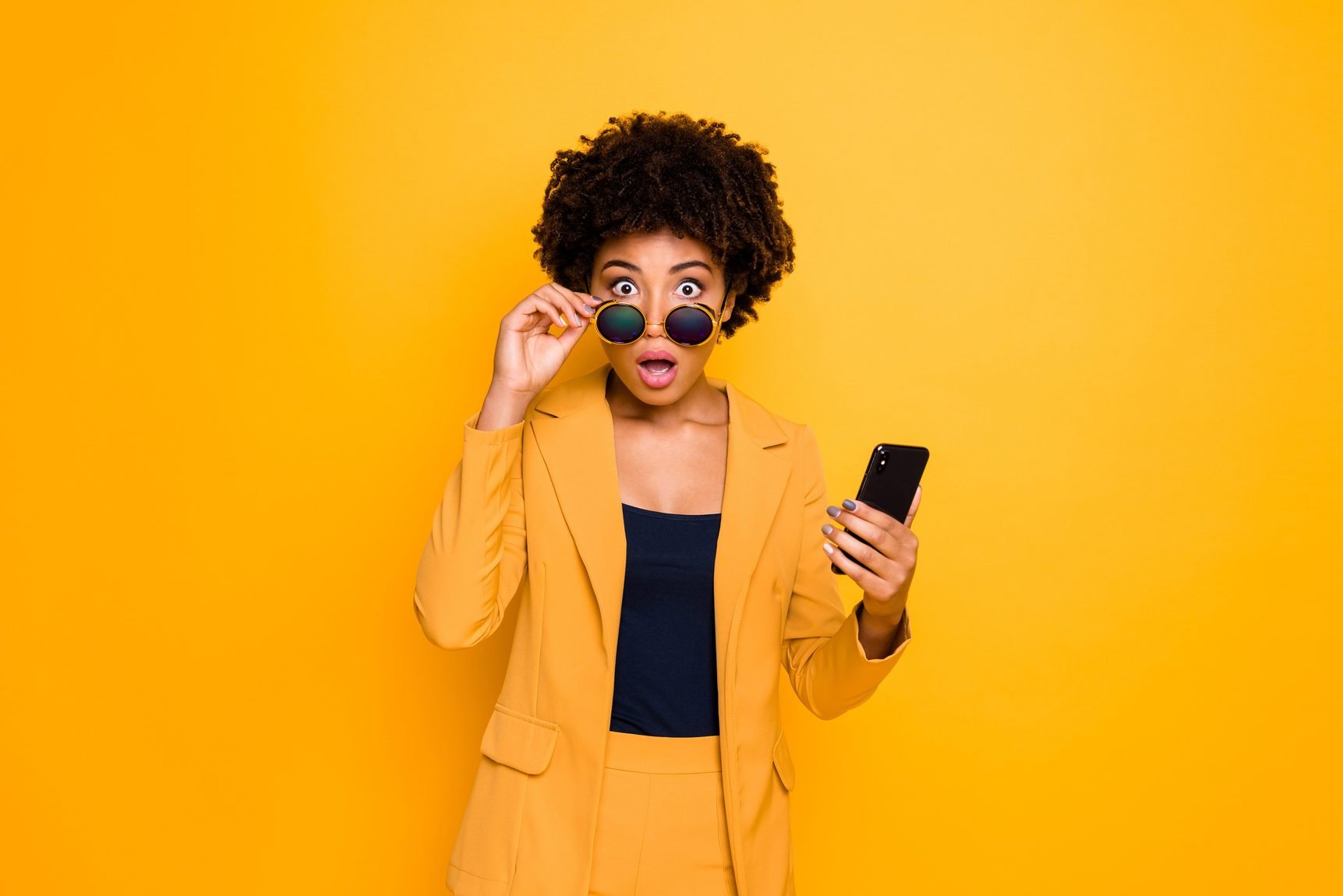 Don’t be that texter

You can’t read a person’s tone through text messages like you can on a phone call. A simple mistake could lead to someone interpreting your message all wrong. Make sure to avoid these annoying texting habits to keep the conversation flowing. Make sure you also know about these things you should never do over text message. 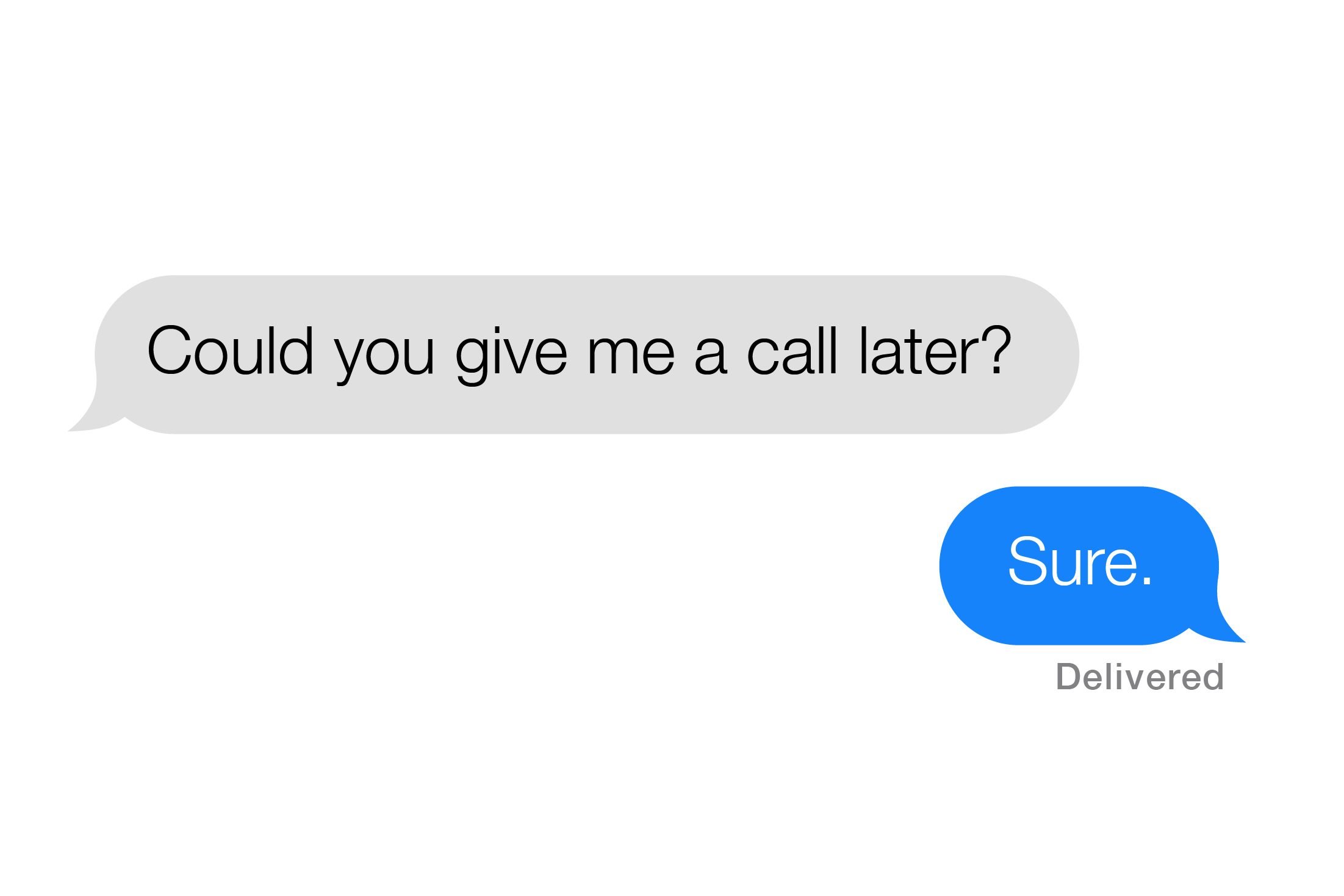 Yes, it’s the proper way to end a sentence, but that dot may make you seem insincere. That’s what researchers at Binghamton University found when they showed study participants a series a short exchanges framed as either texts or handwritten notes. The message was an invite, followed by a one-word response: Sure, Okay, Yeah, or Yup—shown with a period and without. In text messages, the responses that ended with a period were rated as less sincere than those with no punctuation. The effect wasn’t the same in handwritten notes. In a follow-up study that hasn’t yet been published, researchers found that a text response with an exclamation mark may make your message seem more sincere than one that ends in nothing (!). These are the texting etiquette rules you should be following by now. 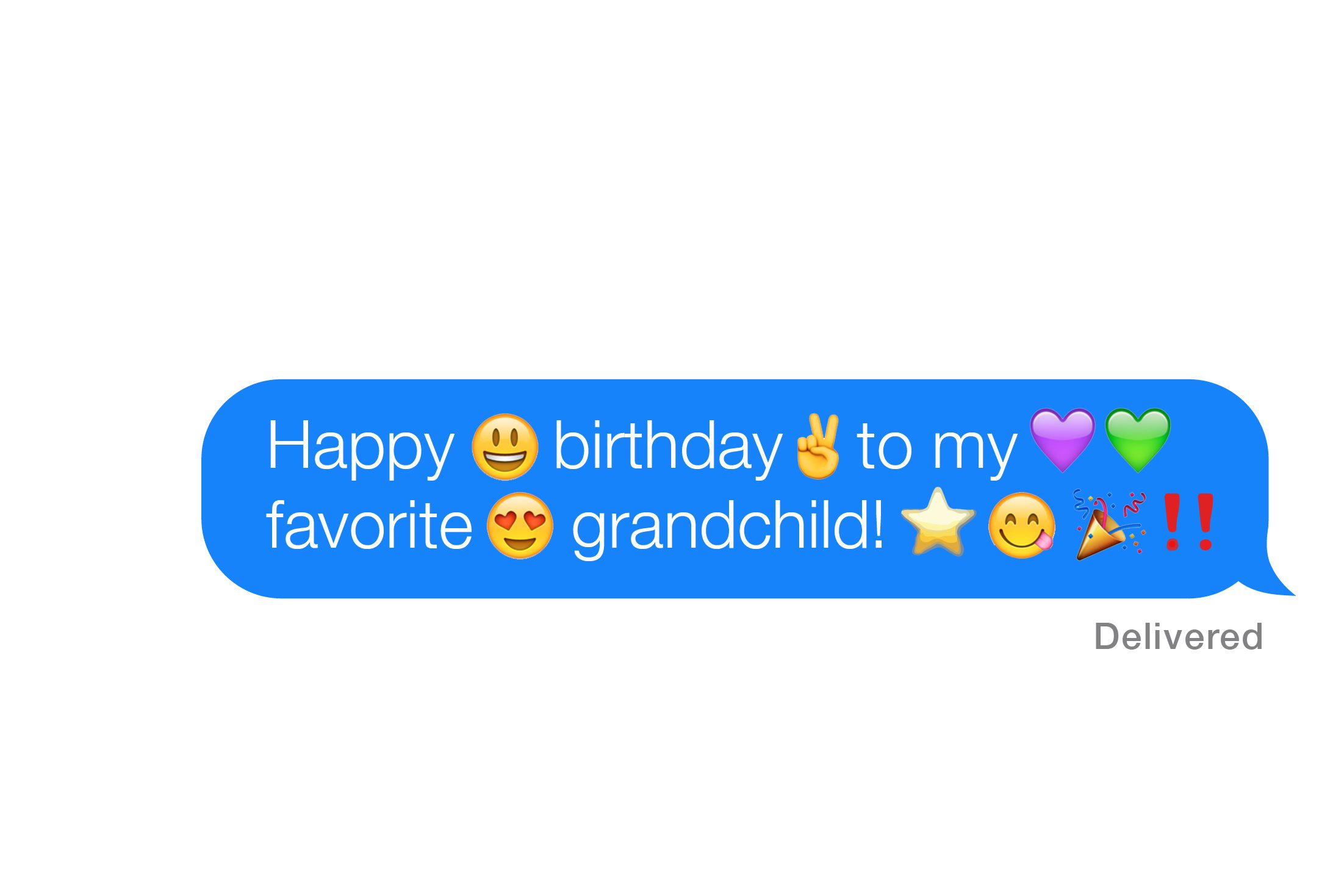 You use too many emojis

It’s perfectly fine to use the occasional emoji to add a little excitement to your messages, but don’t go overboard. If your text is followed by a string of different emojis or you use emojis to replace words in your messages it can get pretty annoying. Stick to the occasional smiley face or heart. Here’s how to hide your phone number when sending text messages. 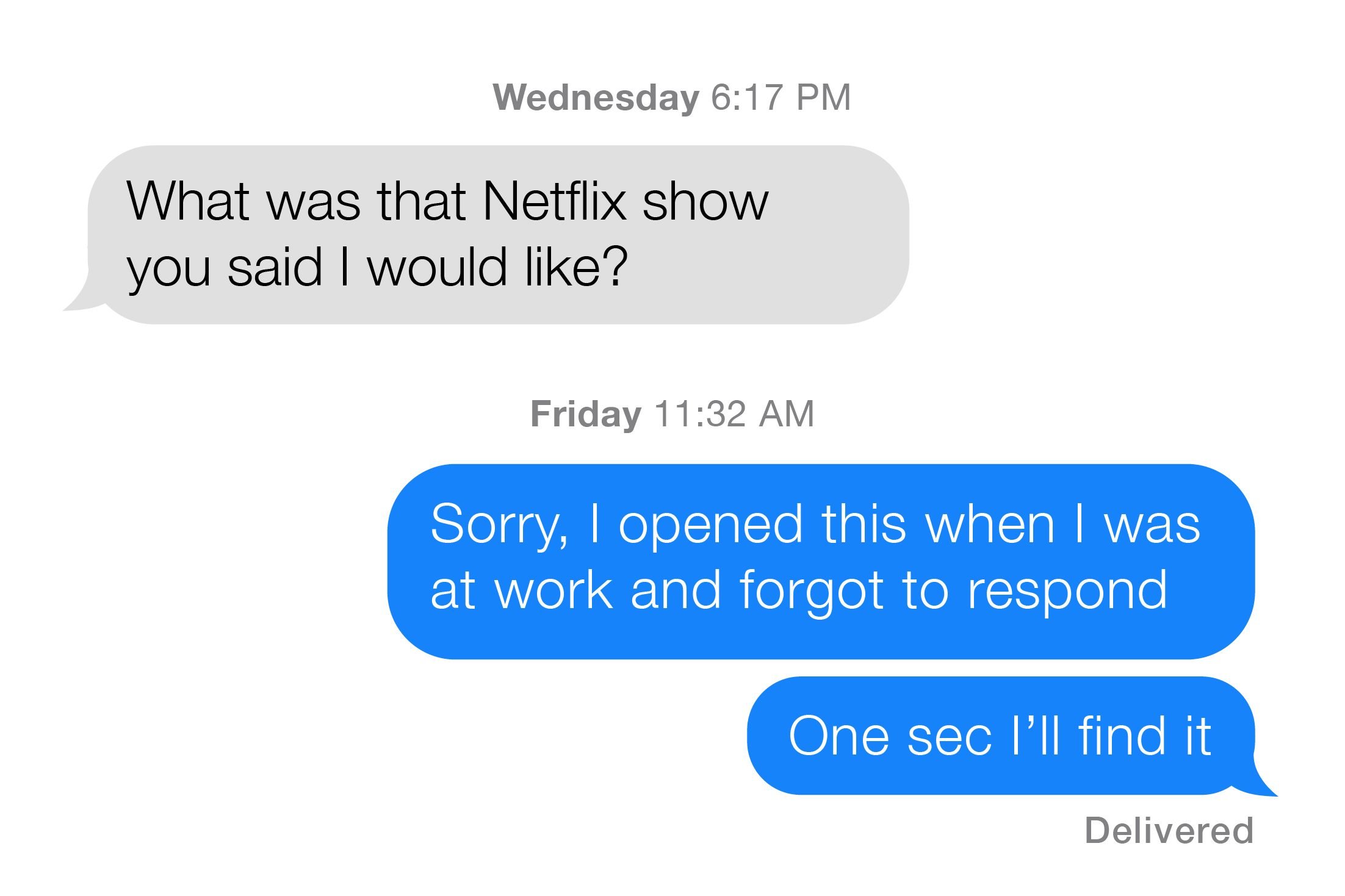 You wait days to return a text

We’ve all opened a text message, been busy, and forgotten to respond, but we’ve also been the one waiting for a reply for days and know how annoying it can be. If you’re in a spin class or meeting and know that you can’t respond right away, don’t open the text message! Wait until you have time to respond so that you don’t forget to reply. If they ask a question that you don’t have the answer to right away, let them know you’ll get back to them so they aren’t waiting for an initial reply. Make sure you never do these things when texting your partner. 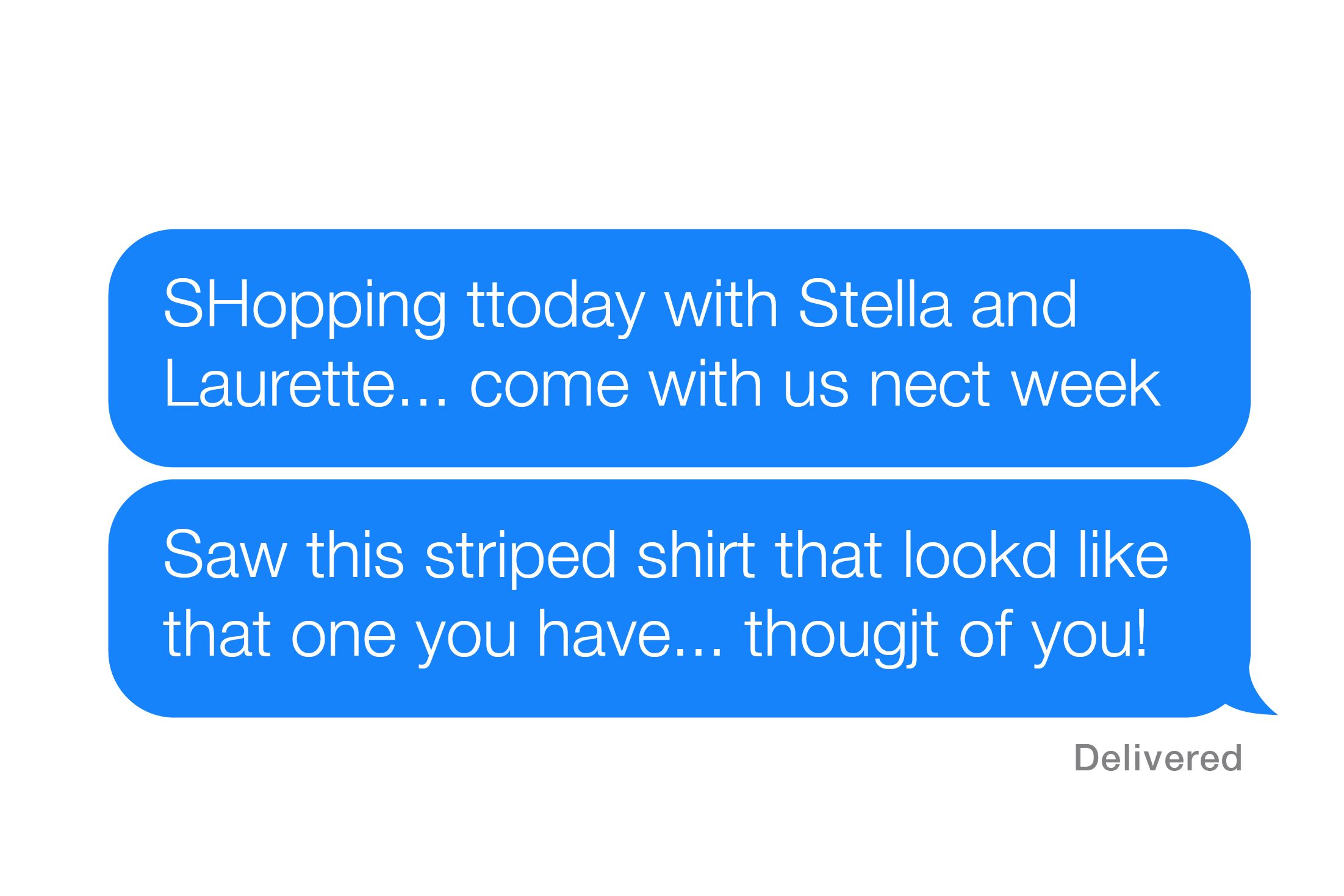 Typos and incorrect grammar are the biggest turn-offs for single women and men, according to a Match.com survey. You know what else singles—and probably everyone else on the planet—also find annoying: responding with short answers, like “k” and “cool.” Just a tiny bit more effort might go a long way, or at least get a second date. 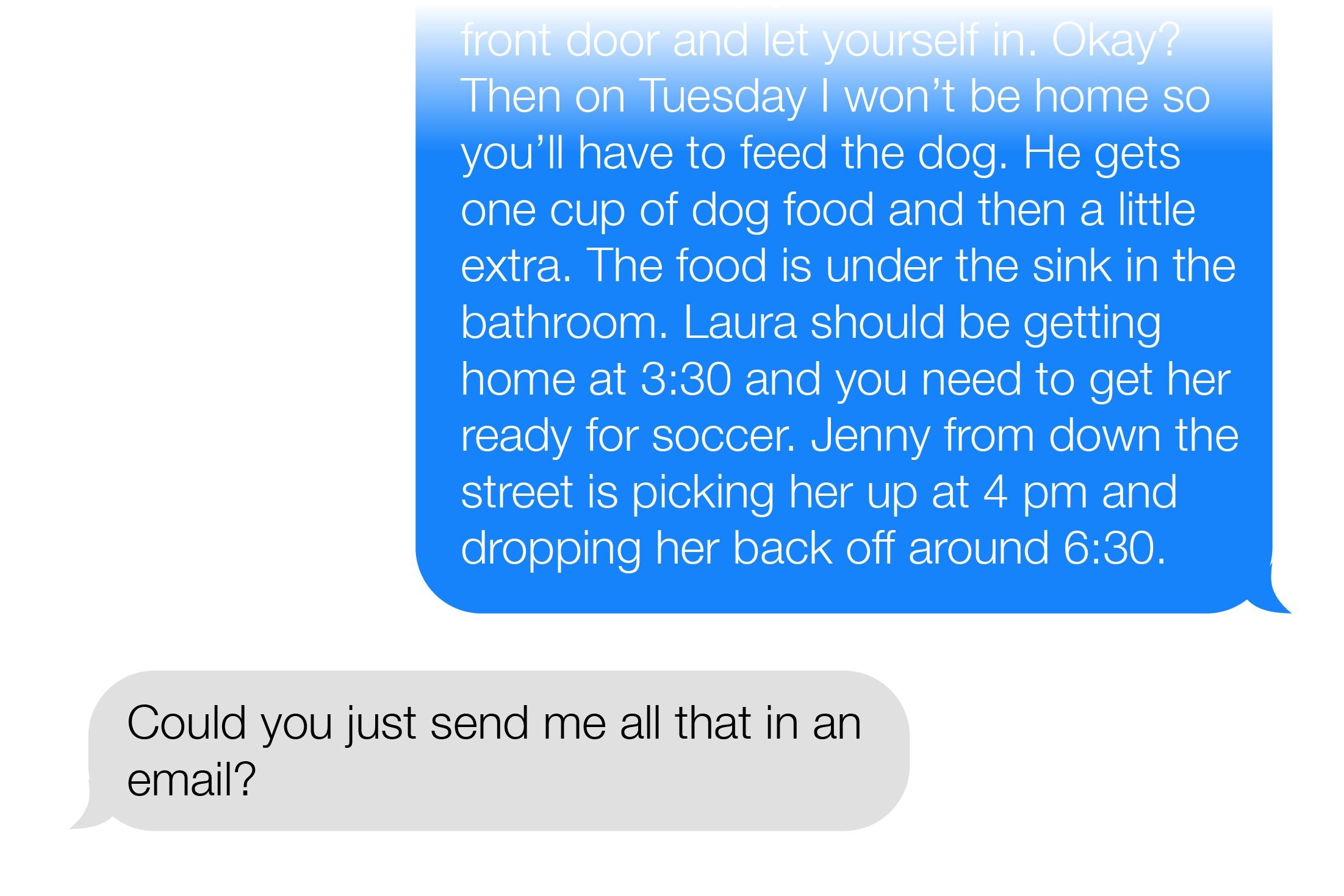 Texts shouldn’t be super long, you’re not writing a novel. Keep it short and sweet and if you have a lot to say, ask the person you’re texting if they want to chat on the phone. Make sure you also never send the most annoying word in the English language over text. 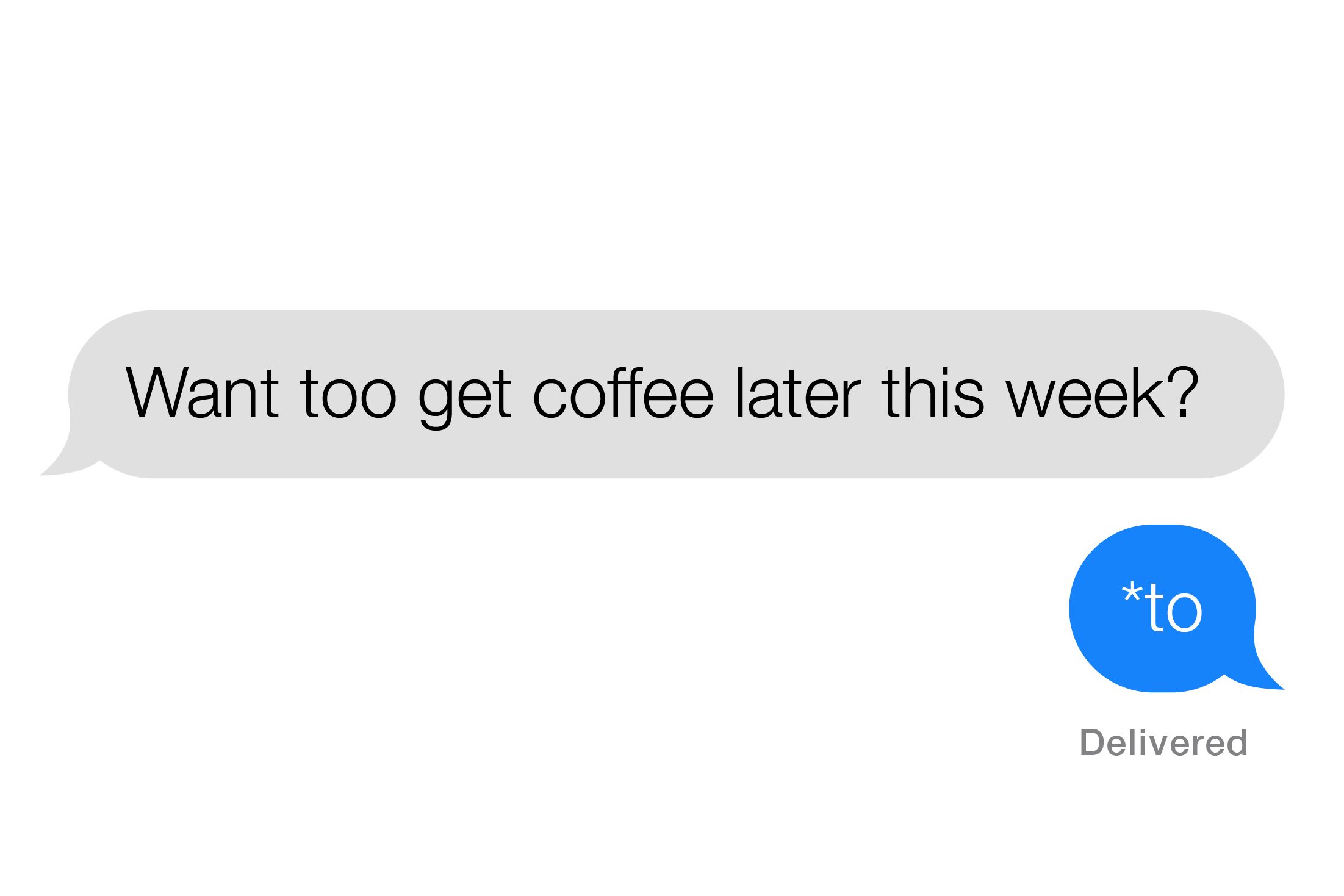 People don’t put the same effort into texting as they do into writing their senior thesis, so don’t correct their grammar. Phone screens are tiny and our fingers are big so people are bound to make mistakes when texting. And, people rarely proofread what they write since texting is done so quickly. Here are some cell phone etiquette rules you should be following as well. 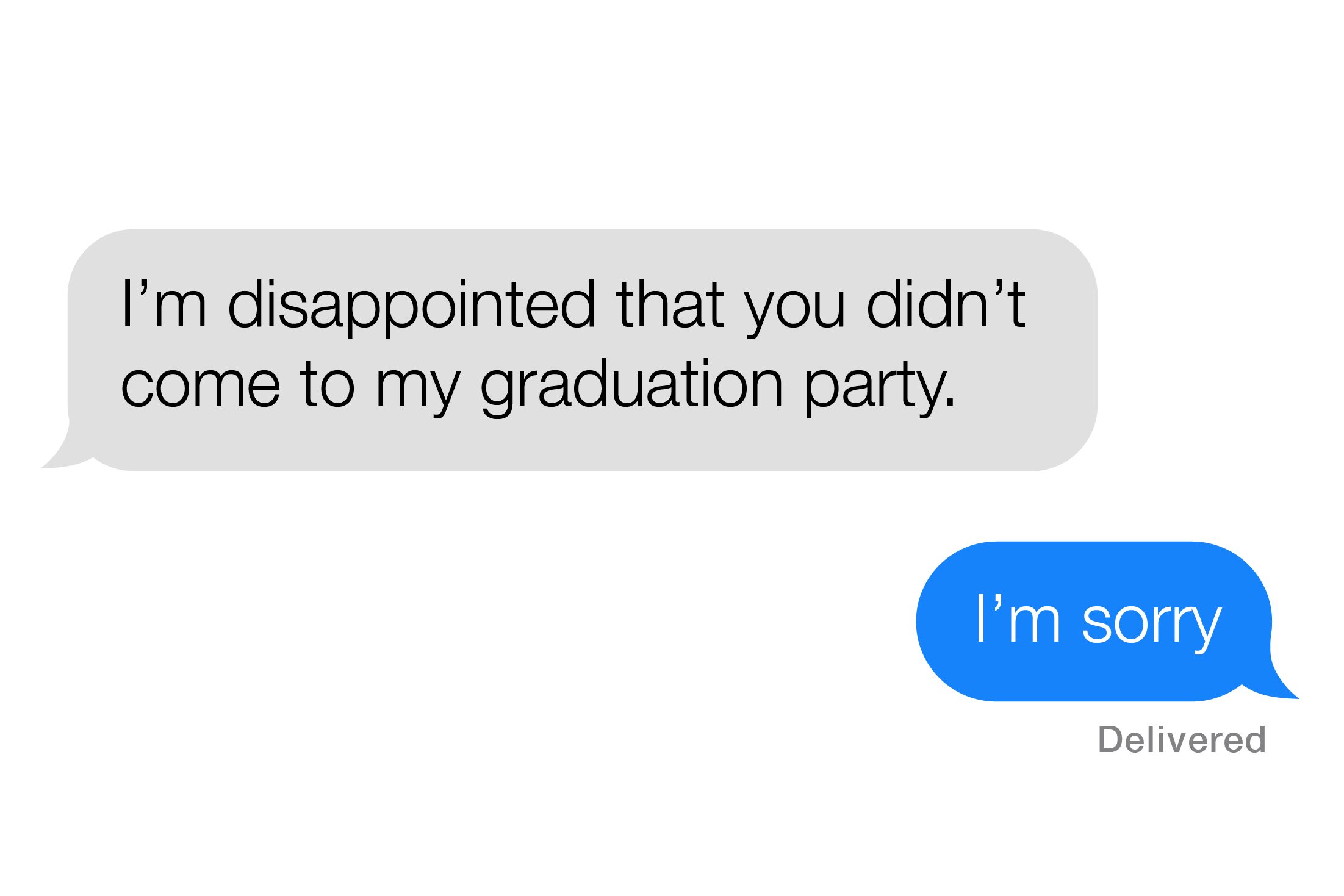 You say sorry via text

Here’s the thing with that: You’re not actually saying sorry. You’re not facing the person you wronged and looking them in the eye when you ask forgiveness. And they’re not getting the chance to see that you really feel bad. MIT social scientist Sheryl Turkle told Tech Insider: “A face-to-face apology is such a classic place where we learn empathy,” she said. “If you’re apologizing to me, I soften because I get to see that you’re genuinely upset—you get to see that I have compassion for you. But if you type ‘I’m sorry’ and hit send, nothing happens.” Texting an apology is not tragic, but you both get more out of it if you do it face to face. Here are 25 things even polite people apologize for. 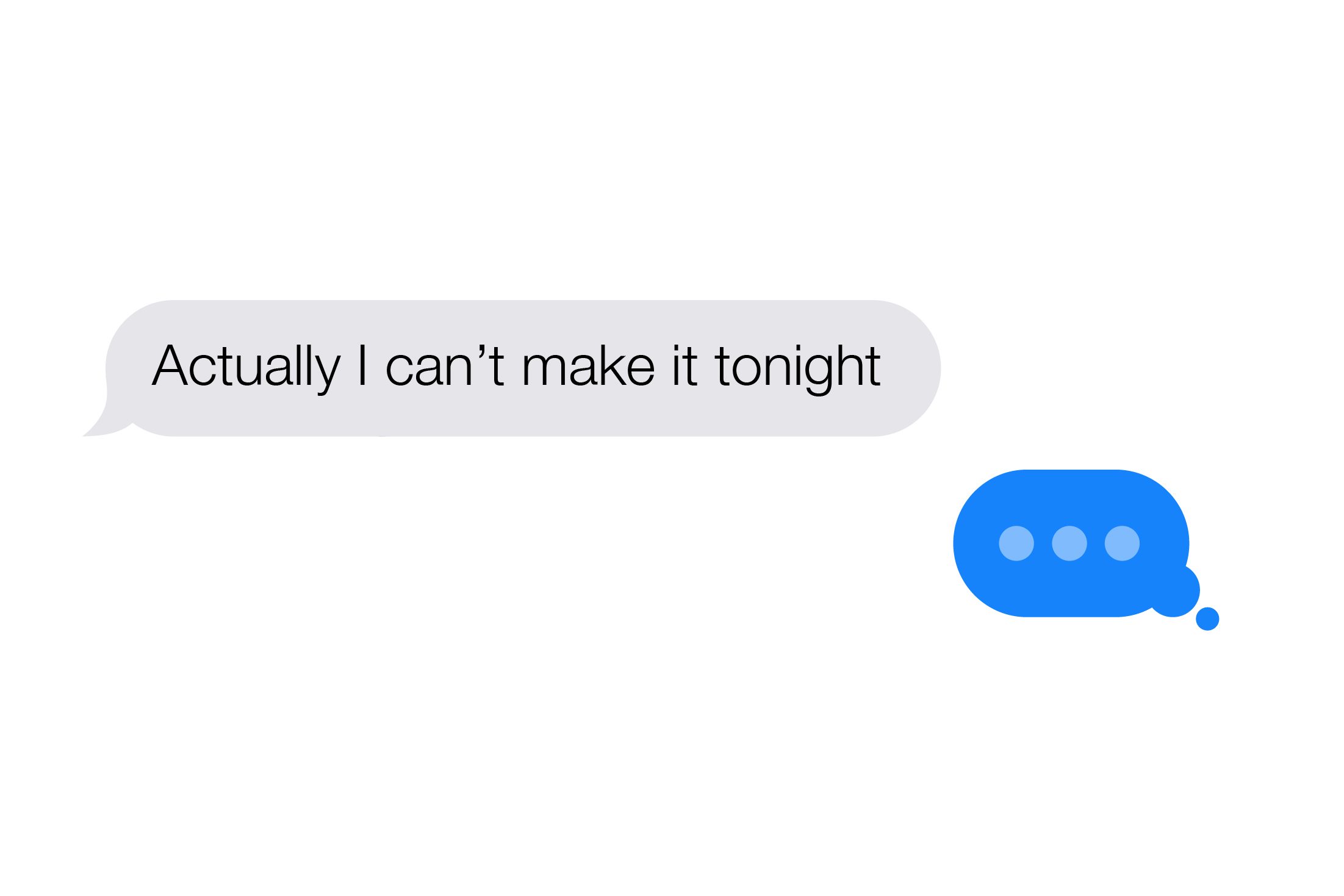 Your friend messages you to see if you’re mad at a comment she made the night before. You’re not. You write: Whatever, no big deal. You delete—she might read “whatever” as code for mad. You try again, backspace a little more, decide to invite her over for coffee, and look at your calendar to figure out a date. And in this time, she is watching those little bubbles that indicate you are typing appear, and disappear, appear, disappear. She thinks you’re spellchecking your swear words; you’re trying to tell her it’s all good. Those ellipses can speak volumes, even before you say anything. Think (or draft) before you type. Make sure to avoid these annoying email habits as well. 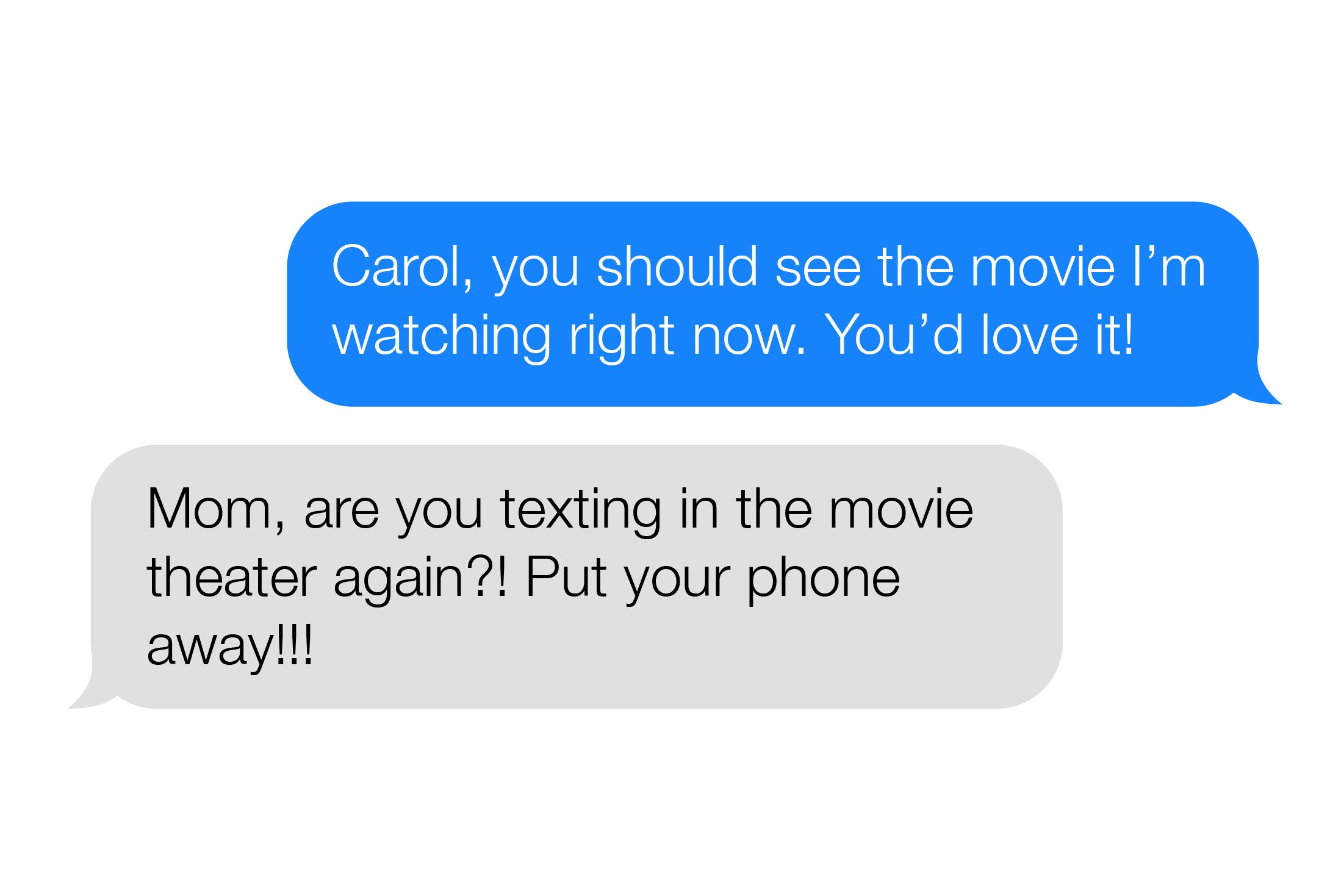 You text at the movies

A darkened theater is the number one most irritating place for you to use your smartphone, according to the Trends in Consumer Mobility Report from Bank of America. Granted, you may not be talking, but everyone around you can see and be distracted by that glowing blue light. Religious institutions and restaurants came in at the number two and three most annoying places to pull out a phone. The same survey also found that four in 10 people text during a meal, and about one-third of respondents check their phone mid-conversation. Rude. You won’t stop laughing at these hilarious texts from parents. 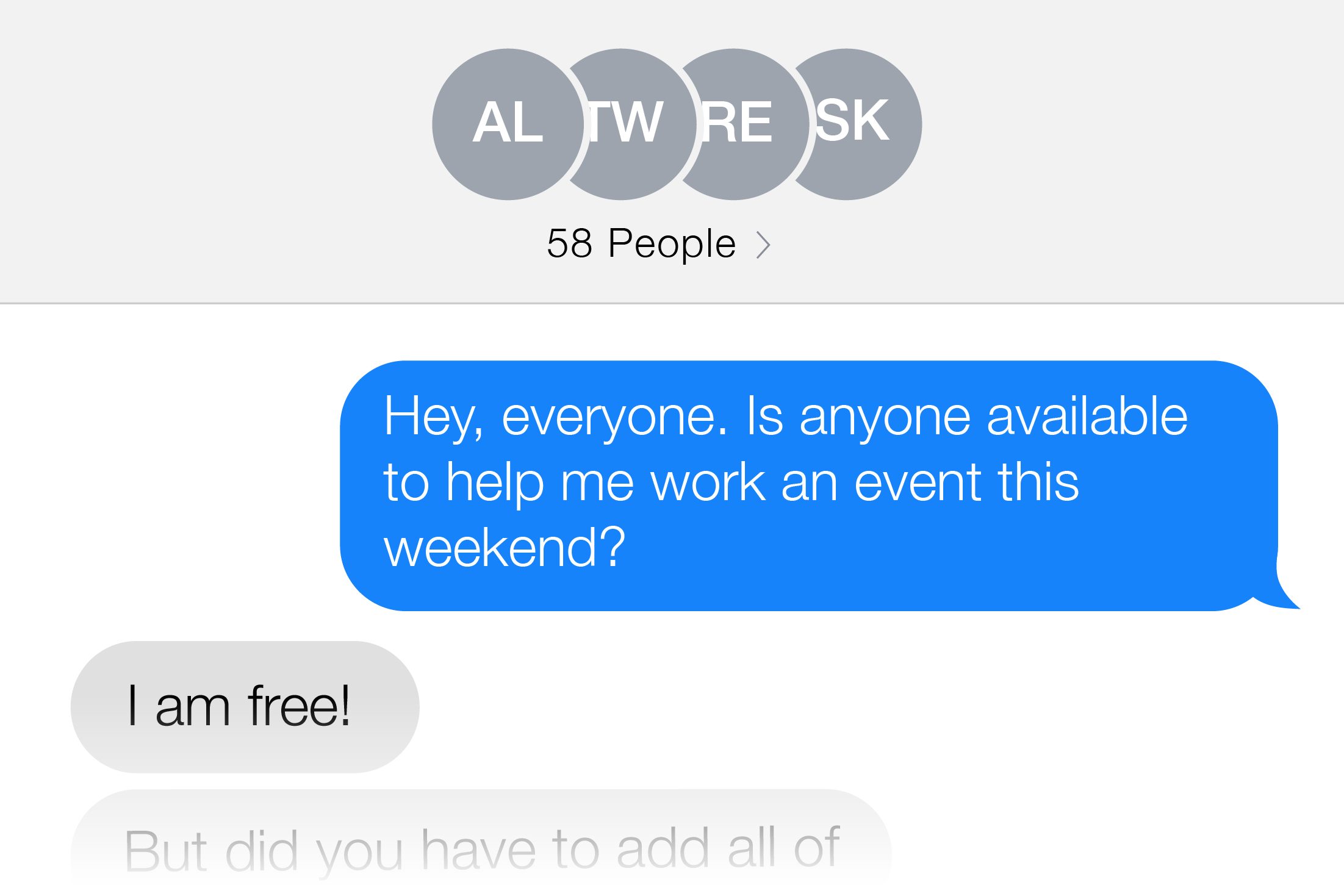 You text your phonebook, at once

A small group text can be fine and efficient: you’re buying your parents a gift on behalf of your siblings and letting them know how much each—that’s fine; you picked a restaurant for lunch and sending your coworkers the address—efficient. But when 50 of your friends’ smartphones ding simultaneously with a picture of your newly adopted puppy, of course they are all going to respond. You may like it, but everyone else on that mass text may not want an endless string of comments, congratulations, or heart emojis. Keep your texts more personal, or just copy and paste to individual friends. If you are on the receiving end of a gigantic group text, respond only to the sender. Watch out for these signs that you’re addicted to your phone. 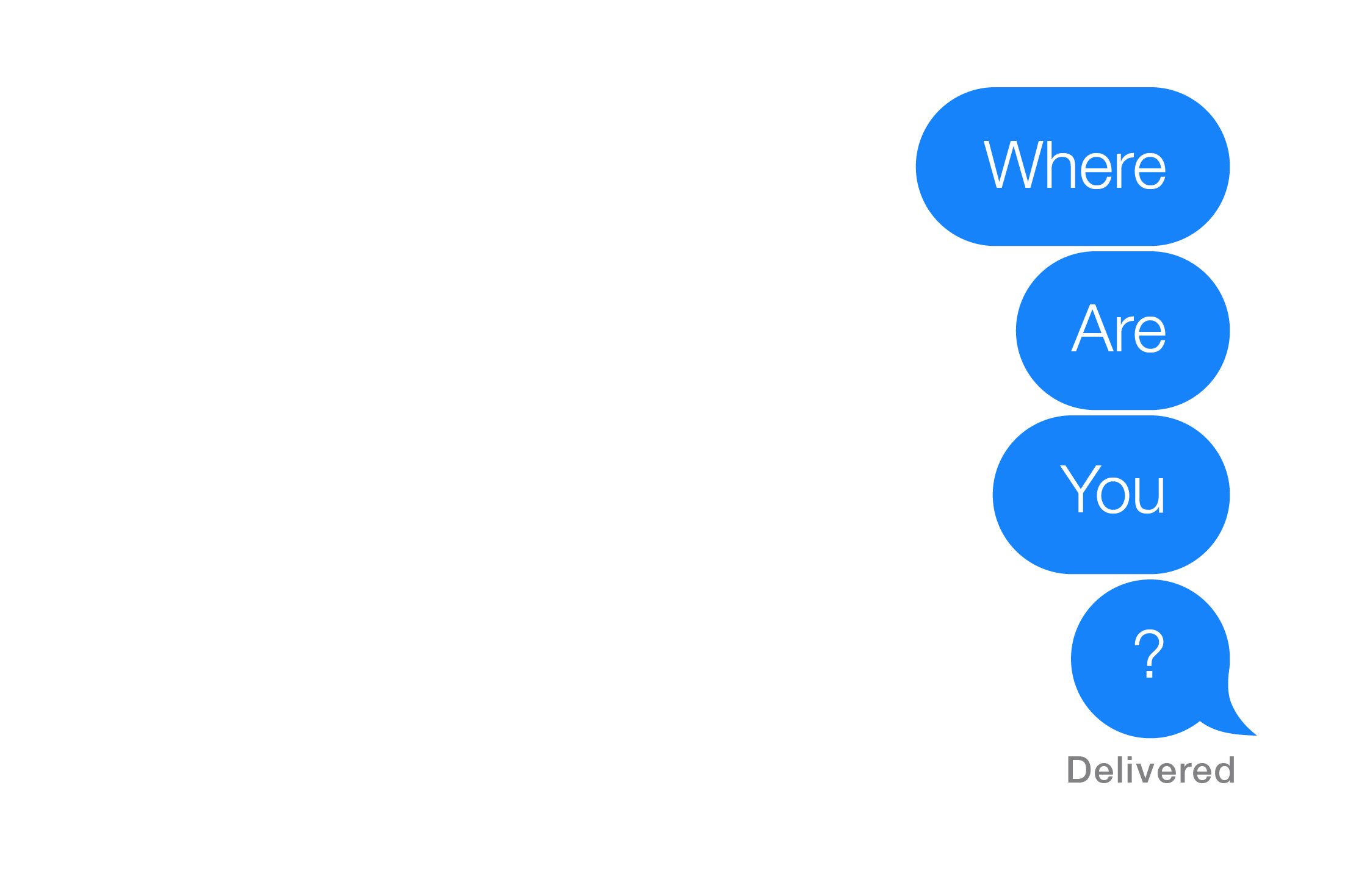 You send one syllable per text

It’s anticlimactic to see nine new text messages that basically amount to one single thought. And if one of the texts gets lost in cyberspace, it’s even harder to follow. These are the little etiquette rules you should always practice in life. 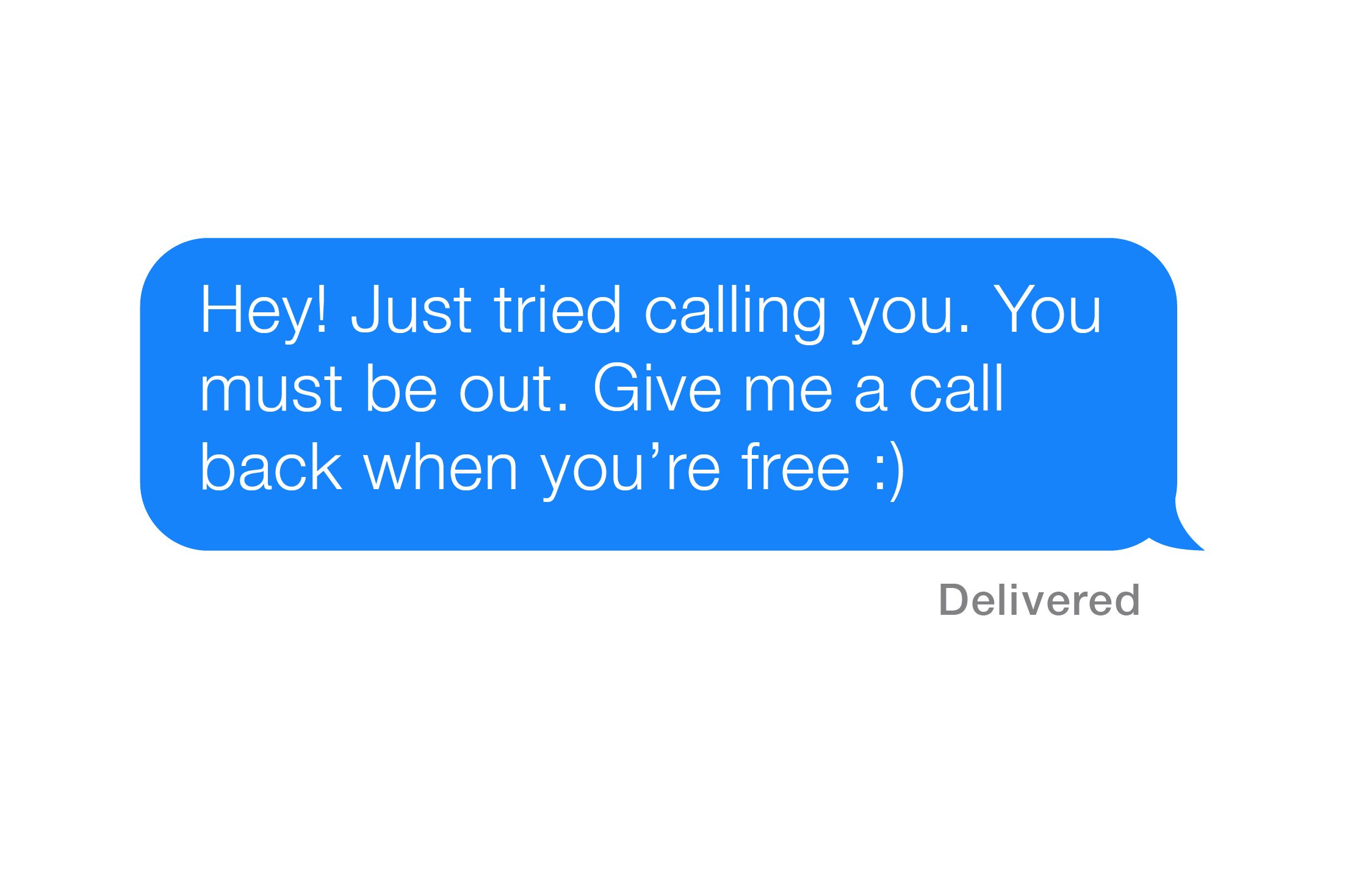 You send a just-left-you-a-message text

You called your friend, and she didn’t pick up. Maybe she was driving or perhaps she was busy. Or maybe she just didn’t feel like talking to you at that exact moment—and now she has two messages from you that she cannot respond to at this exact moment. When it’s not an emergency, it’s really not necessary. Now, learn about the most annoying phrases in the English language.