Even an annual institution has its hiccups. 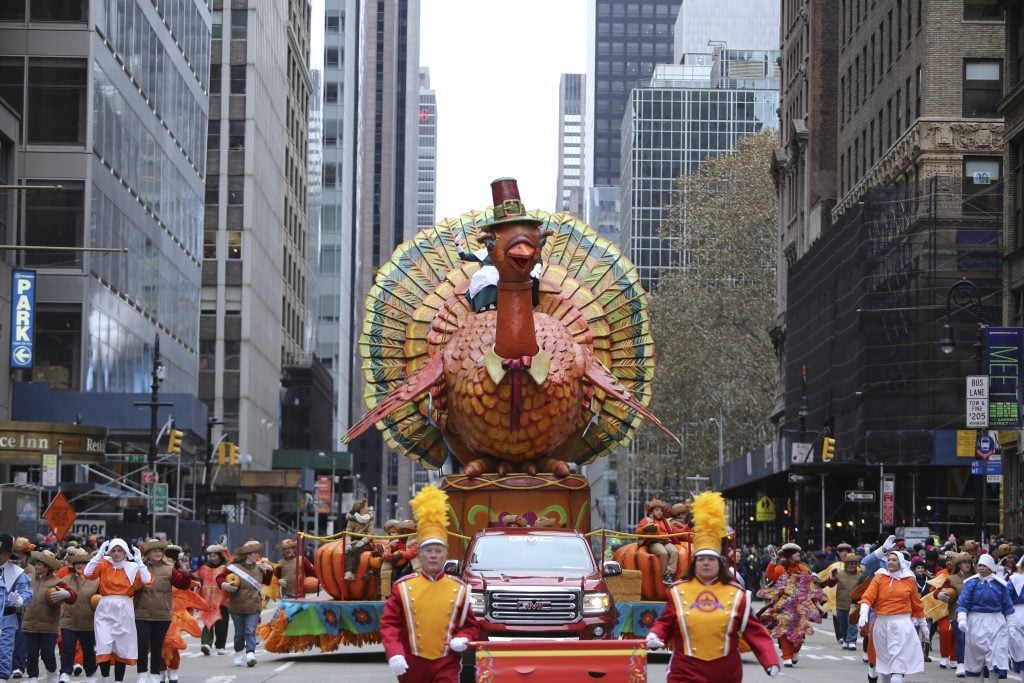 a katz/ShutterstockMacy’s Thanksgiving Day Parade goes all the way back to its debut in 1924 when it began its original route kicking off at the intersection of 145th Street and Convent Avenue in New York City. At almost 100 years old, you’d think the beloved parade is such a well-oiled machine at this point that nothing could possibly go wrong. But when you’re dealing with giant balloons, intricate ground floats, performances, huge crowds, and live television—anything and everything can go wrong. Here are some of the funniest mishaps from the parade’s long history. Even if you’re a Macy’s Thanksgiving Day Parade aficionado, you’ll be shocked by these mind-blowing Macy’s Parade facts. 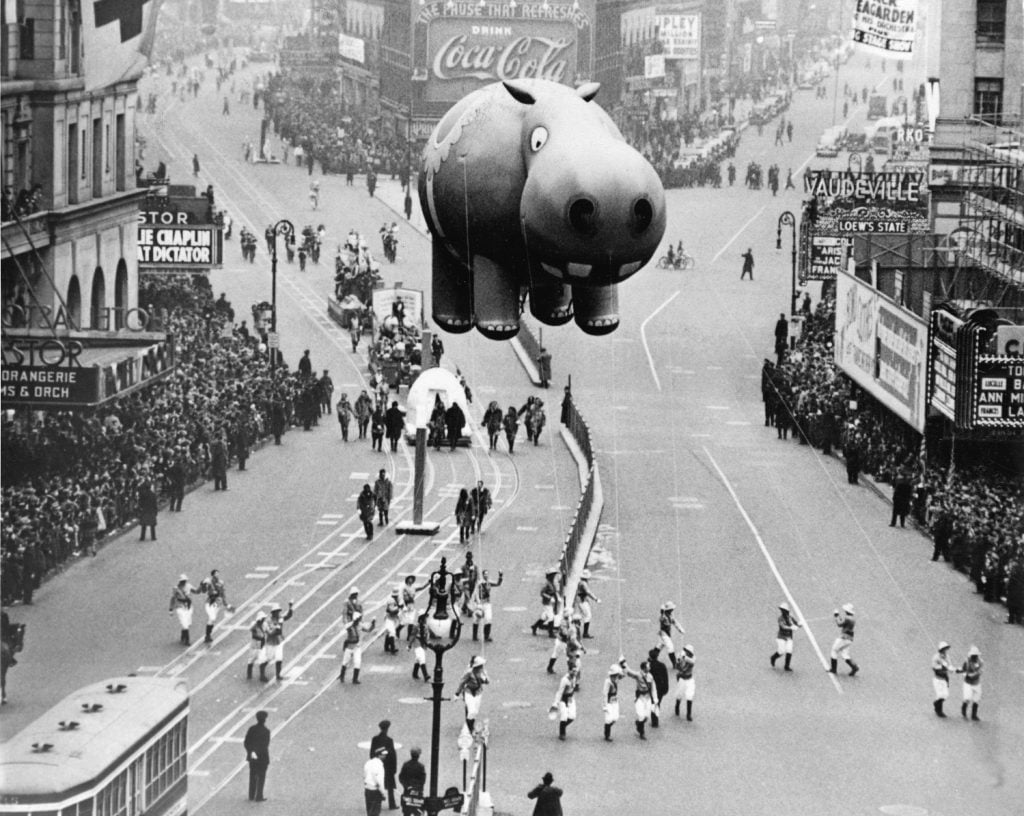 It’s hard to imagine given the enormity of the parade’s balloon floats, but in the early days, Macy’s actually used to set these balloons free. In fact, one particular blue hippo float was allegedly spotted “soaring somewhere over the ocean,” according to the New York Times. 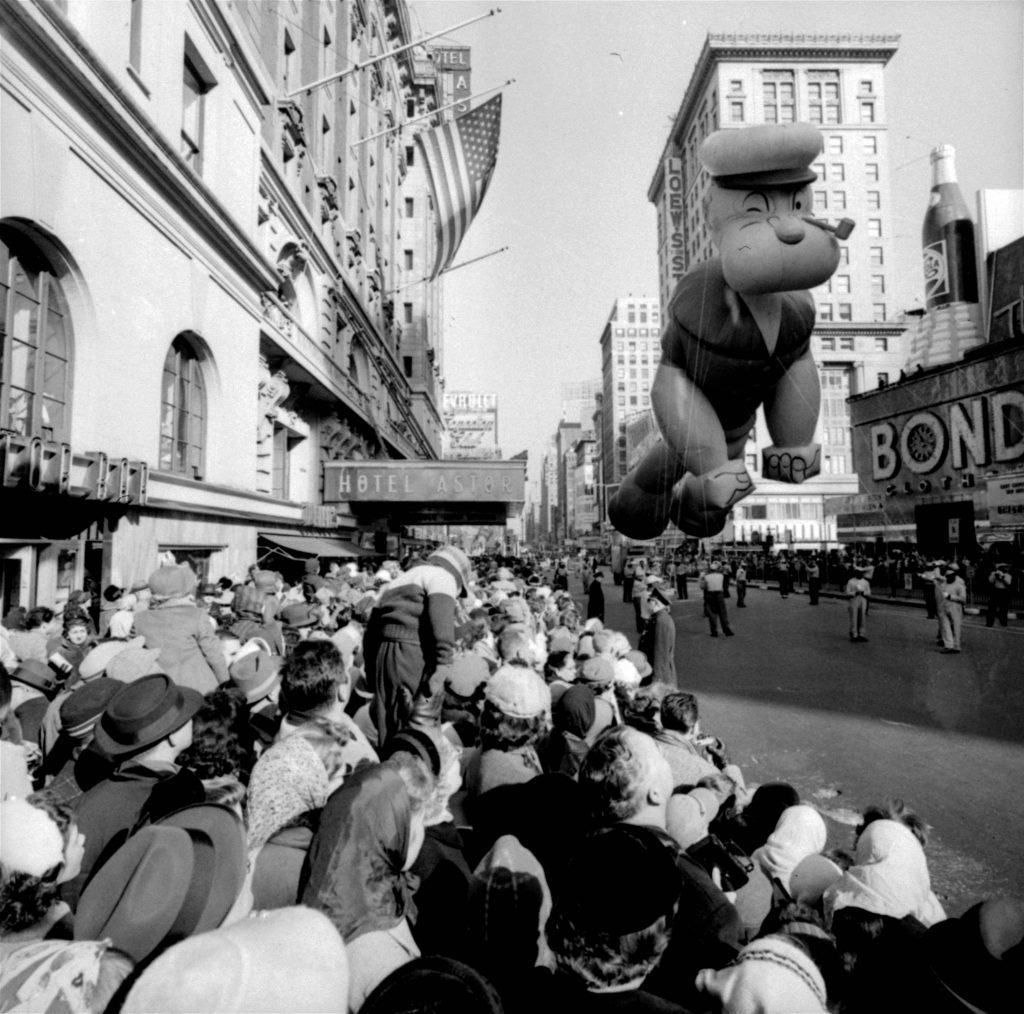 In 1957, Popeye the Sailor Man was a big deal, so naturally, kids marveled at the character’s very own float in the Macy’s Thanksgiving Day Parade. Unfortunately, if you found yourself in the crowd below the spinach-loving guy, you were in for an unexpected surprise. Rain collected in Popeye’s hat due to a flaw in the balloon’s design, and it sent 50 gallons of water dumped on an unsuspecting crowd. See if you can answer these trivia questions about Popeye and other cartoon characters. 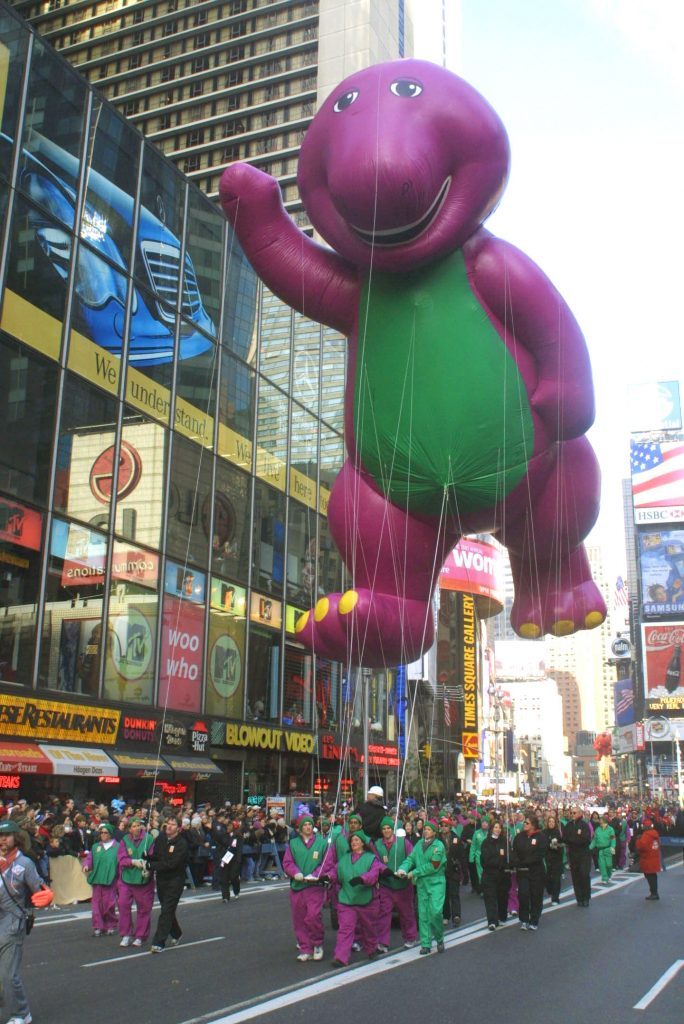 With 43 mile-per-hour winds on Thanksgiving Day in 1997, handlers were struggling to keep control of their balloons. Barney, the purple dinosaur beloved by children across the country, had a particularly rough go along the route and suffered severe damage. The balloon finally had to be removed from the parade at West 51st Street, according to Esquire. Police offers had to stab holes into it in order to deflate the balloon for removal, causing quite a scene for bystanders. Find out the true identity of the real Barney. 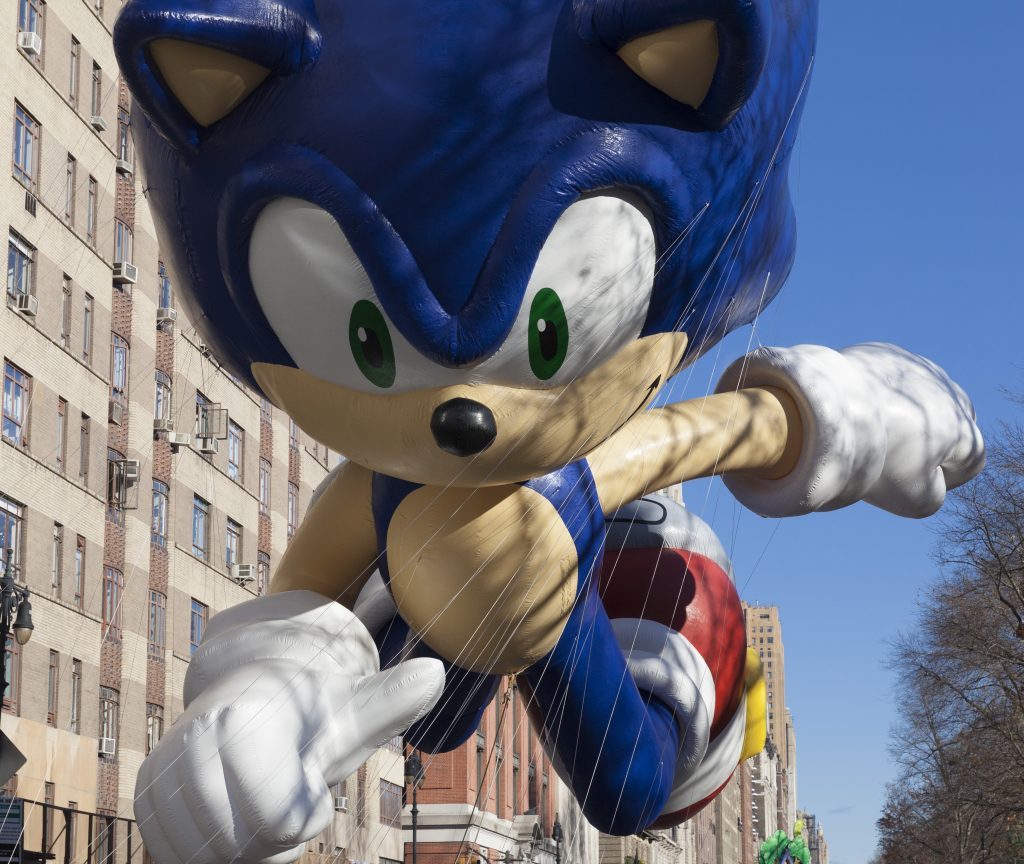 Sonic the Hedgehog couldn’t outrun the winds occurring in New York City on Thanksgiving in 1993. This one should be filed under horrifying, not hilarious, because balloon hit a lamppost, knocking it down and seriously injuring both an off-duty police officer and a ten-year-old girl, according to the New York Times. Here are some more answers to your biggest questions about Thanksgiving. 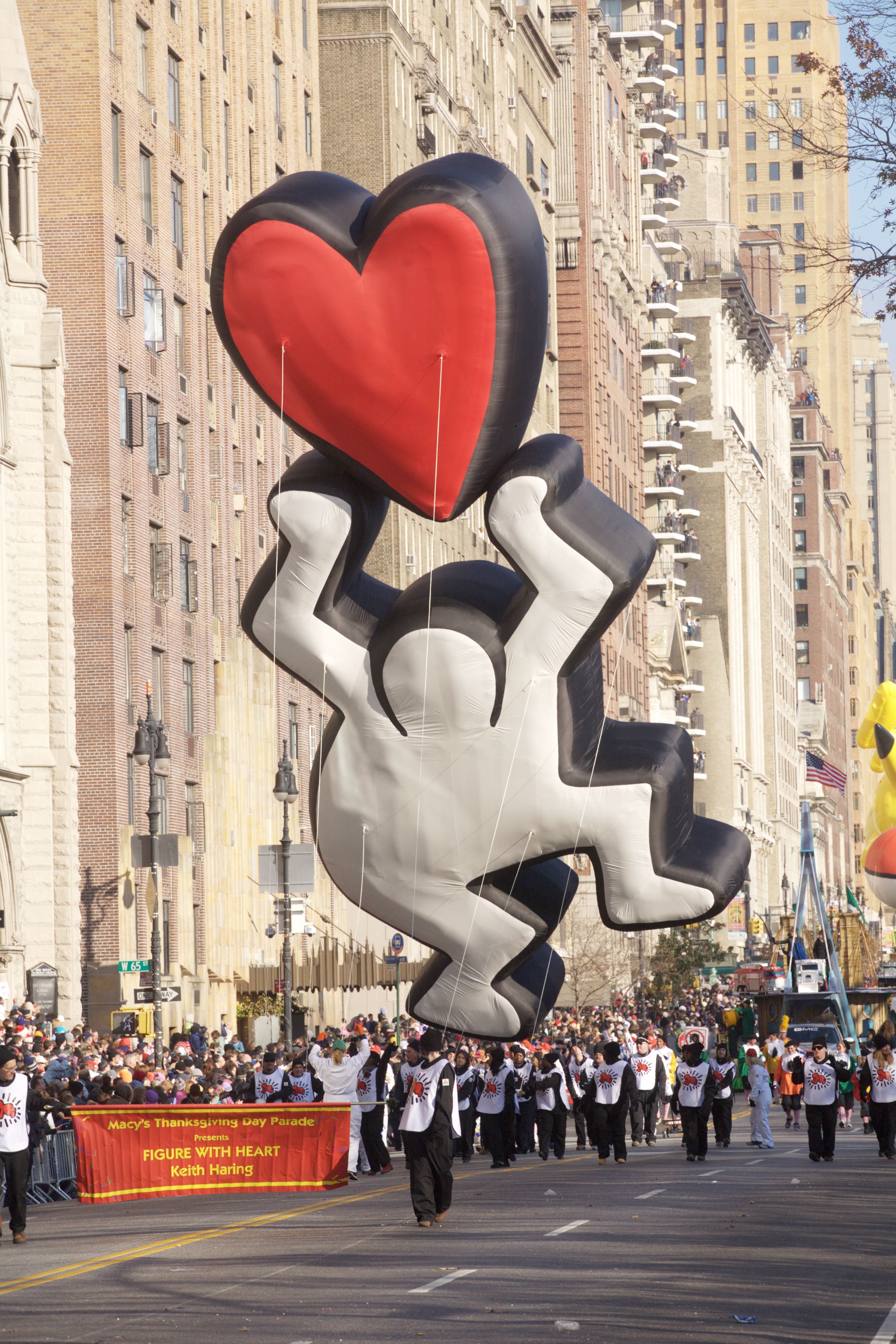 In 2008, artist Keith Haring’s Figure with Heart piece was translated into a stunning parade balloon as a part of the Blue Sky Gallery series. Unfortunately, the balloon took a detour, crashing into the tent used by NBC to house broadcasters announcing the parade for viewers at home. Al Roker and friends had to wait until the balloon had been cleared away from the tent to continue their portion of the broadcast. If you love the work of Keith Haring, check out these American cities with the coolest street art. 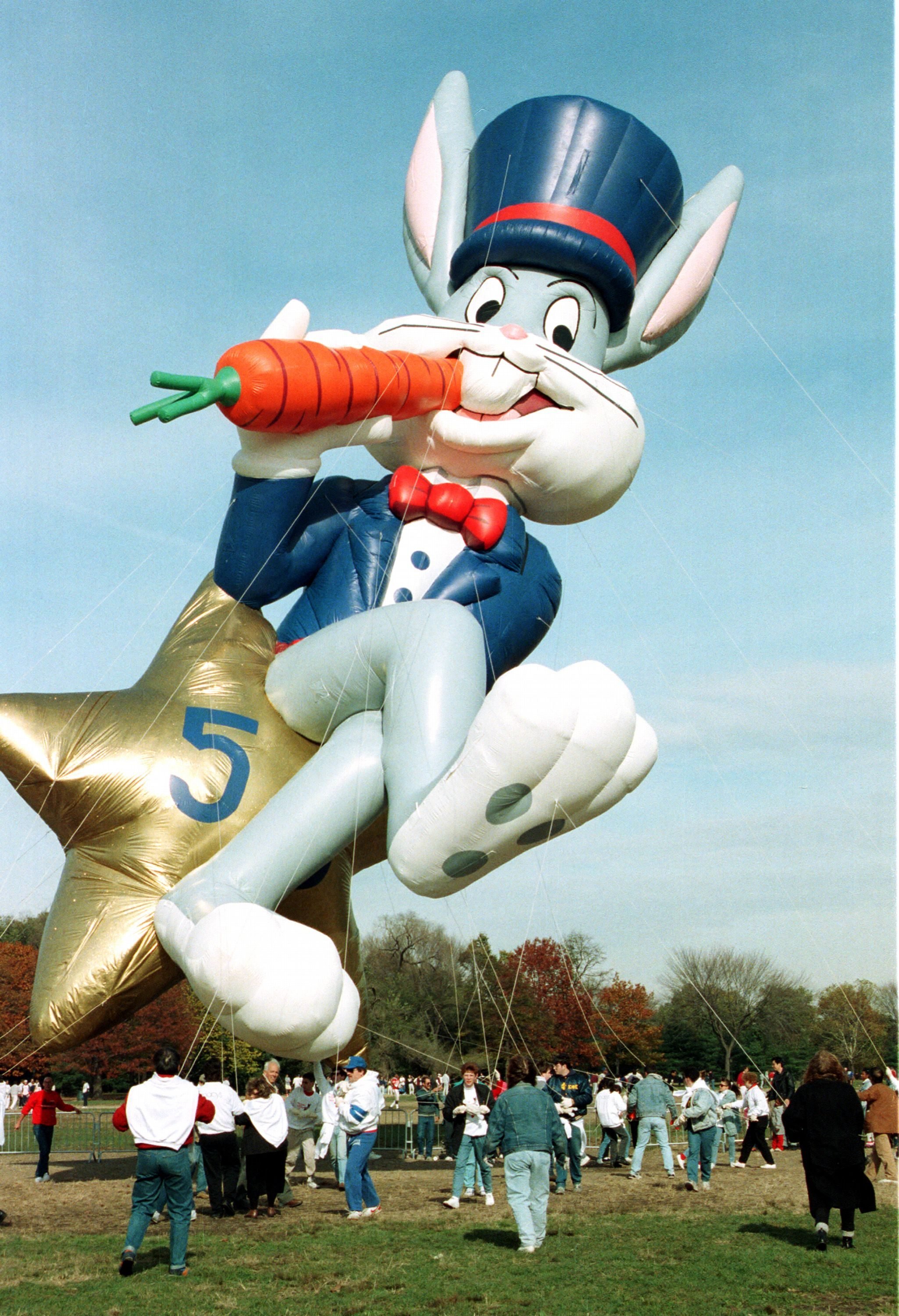 Winds wreak havoc on the Thanksgiving parade, but so do other weather elements, like snow. It’s not completely out of the ordinary for the white stuff to fall from the sky on Thanksgiving Day in New York. In 1989, there was a snowstorm afoot as the parade got underway. Bugs Bunny fell victim to the perils of the weather, with a big tear to his side, according to People. Love watching the parade on Thanksgiving morning? You’ll love these other fun Thanksgiving traditions. 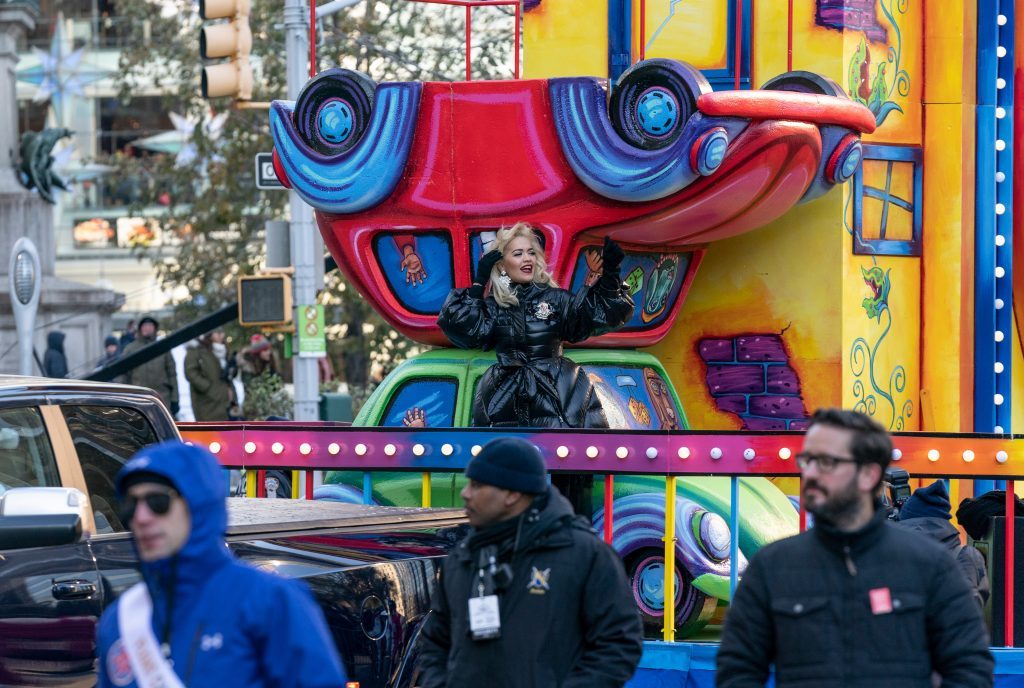 Singer Rita Ora came under fire in 2018 when she had an unfortunate lip-sync fail. Typically parade performers must lip sync because it’s nearly impossible to perfect sound requirements needed to sing live at the event, says the Daily Beast. In Ora’s case, the fact that she wasn’t singing live became over-apparent when the audio began to play without her realizing it. Then she struggled to catch up to the pre-recorded track. On the flip side, check out the best-ever Macy’s Thanksgiving Day Parade floats.

a katz/ShutterstockEarly on in the parade’s history (we’re talking 1929) one of its originals—the classic turkey float— actually hit a No Parking sign along the route. The sign, situated at West 58th Street and 6th Avenues, was damaged but, fortunately, no one from the crowd was injured in this particular incident. A big fan of some of the classic floats like the turkey? You’ll love these vintage photos of Macy’s Thanksgiving Day Parade. Felix the Cat was among the first balloon floats to be introduced at the Macy’s Thanksgiving Day Parade in 1927. Unfortunately, Felix floated upwards, according to Hatching Cat NYC, and tangled in some telephone wires where he eventually caught fire. The fire was extinguished but Felix had to be retired for future parades. If you’re hosting Thanksgiving this year, avoid any holiday fails of your own with these easy tips.