Find out what signals the doomed royal couple were secretly sending for years. 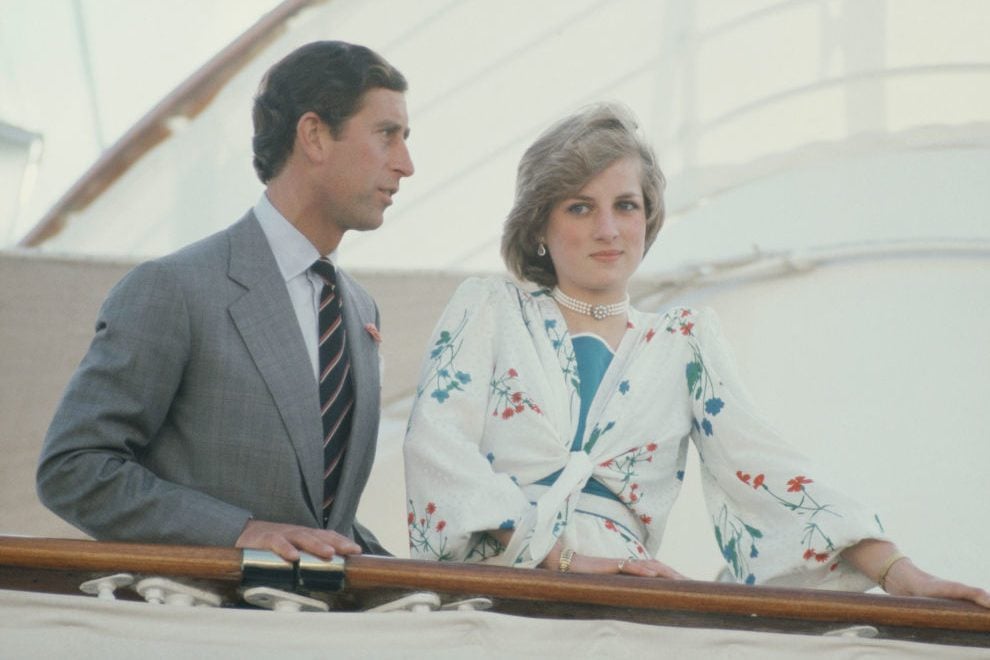 It’s not just hindsight that’s 20/20—so too is body language, at least if you know what to look for. No one can read non-verbal cues quite so adeptly as our body language expert, Patti Wood, MA who helps us review the evolution of the doomed relationship between Prince Charles and his first wife, Diana, Princess of Wales. Wood also gave us a glimpse into what Queen Elizabeth is secretly saying with her body language. 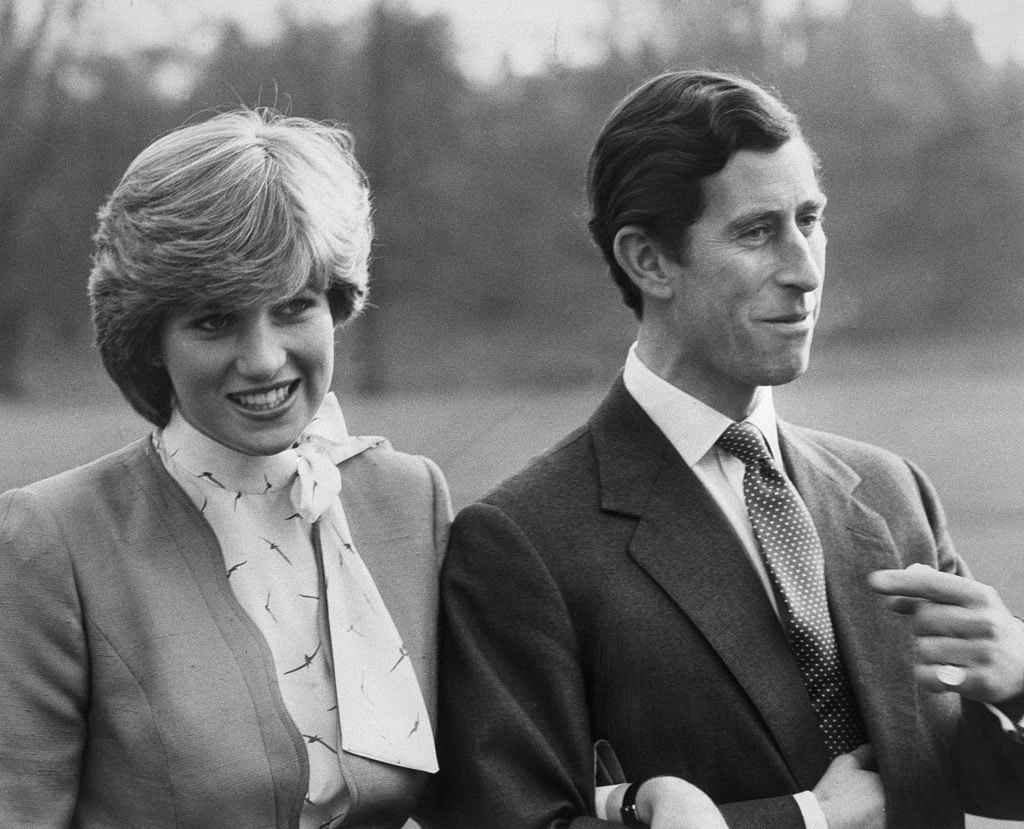 Theirs was to have been a storybook romance, or so it seemed. When Prince Charles met Lady Diana Spencer for the first time in 1977, he was the 29-year-old heir apparent to the British throne, and she was the teenaged kid sister of the woman on whom the young prince had set his sights. Although Charles was the “most eligible bachelor in the world,” Lady Sarah Spencer was indifferent to the young prince.

It wasn’t until two years after that relationship fizzled that Prince Charles finally took an interest in Lady Diana. A brief courtship began, and six months later, the prince proposed. Here in late February 1981, right after announcing their engagement, the two pose informally outside Buckingham Palace, with Diana gently and passively resting her hand palm down on the crook of the Prince’s arm while the prince hides one hand inside his jacket. “It’s an early and subtle warning sign of Charles’ lack of commitment,” Wood notes. “He’s attempting to make the connection less intimate.” Here’s the real reason Prince Charles proposed to Diana when he wasn’t in love. 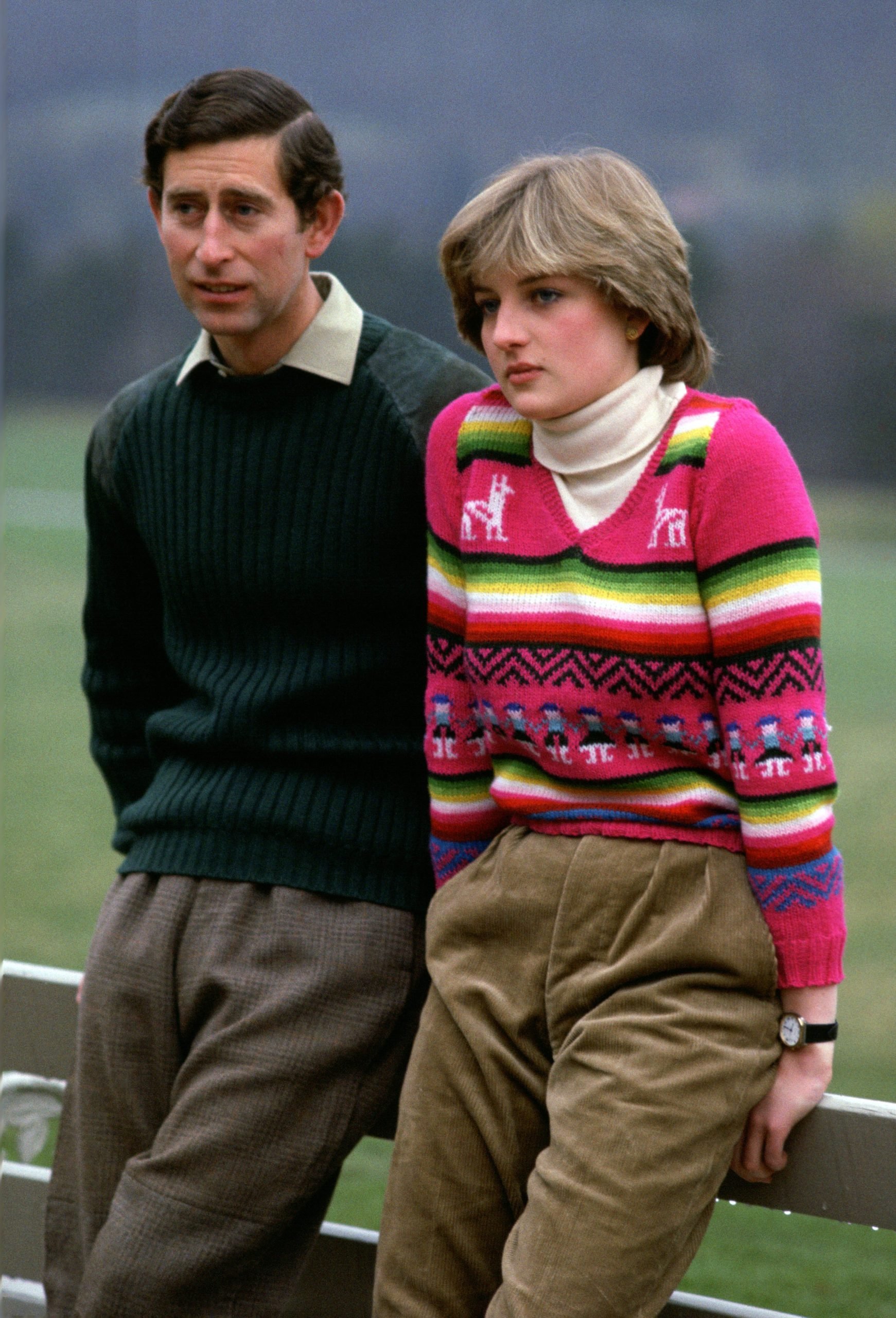 “During the engagement so many years ago, I could already see something wasn’t quite right between Prince Charles and Lady Diana,” Wood tells Reader’s Digest, pointing out how in this photo taken during the engagement, Diana is gazing away from Charles, her eyes hooded and looking so sad it appears tears are mere seconds away. Wood also notes how Diana’s shoulders are stiff and up near her ears while her arms are tense and still. It’s as if a “fear” response has been triggered, and she’s frozen in place. “She may be fearful of the cameras,” Wood points out, “but notice how Prince Charles [who arguably has been getting comfortable with cameras all his life], is also holding his arms stiffly by his side. It’s as if these two already know their impending nuptials are a mistake, but they’re powerless to do anything about it. Don’t miss these 10 facts you probably don’t know about Diana, Princess of Wales. 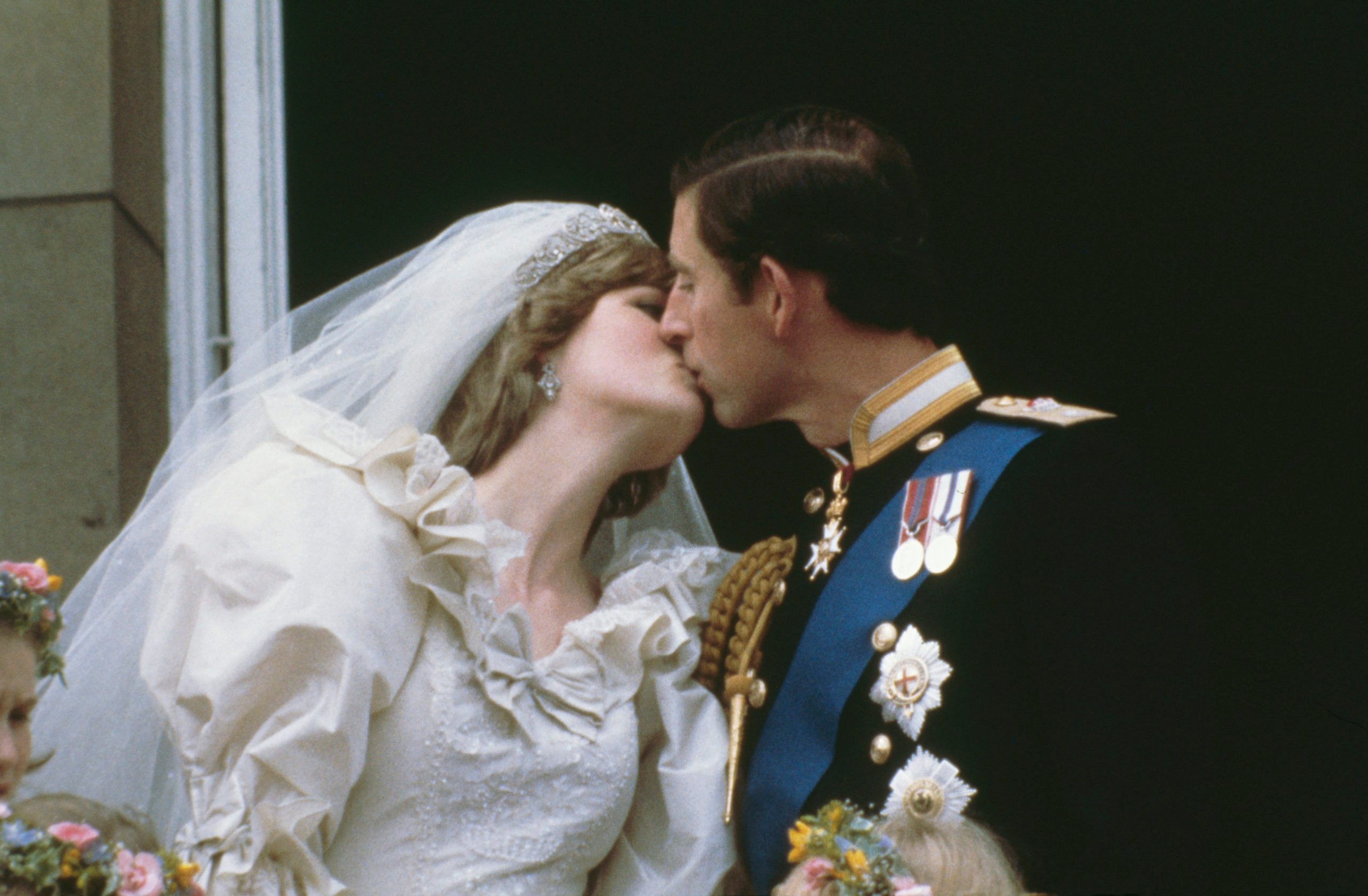 And so they lived happily ever after…?

It was to have been the wedding of the century, nay, a wedding for the ages. And, in a sense, it was. Nearly 1 billion television viewers in 74 countries watched the two exchange vows at St. Paul’s Cathedral in the presence of 2,650 guests as they wed on July 29, 1981. But that was just the first day of the rest of their lives, and judging by the dynamics at work in this photo of the newlyweds kissing on the balcony of Buckingham Palace, things were about to slide downhill, fast. “See how she’s doing all the work?” Wood points out to Reader’s Digest. She’s clearly passionate about her new husband, but he does not share her ardor. It’s as if she’s literally “bending over backward” to hold his attention, while he responds with a nearly chaste peck on the lips, his eyes closed, his passion either in-check or non-existent. 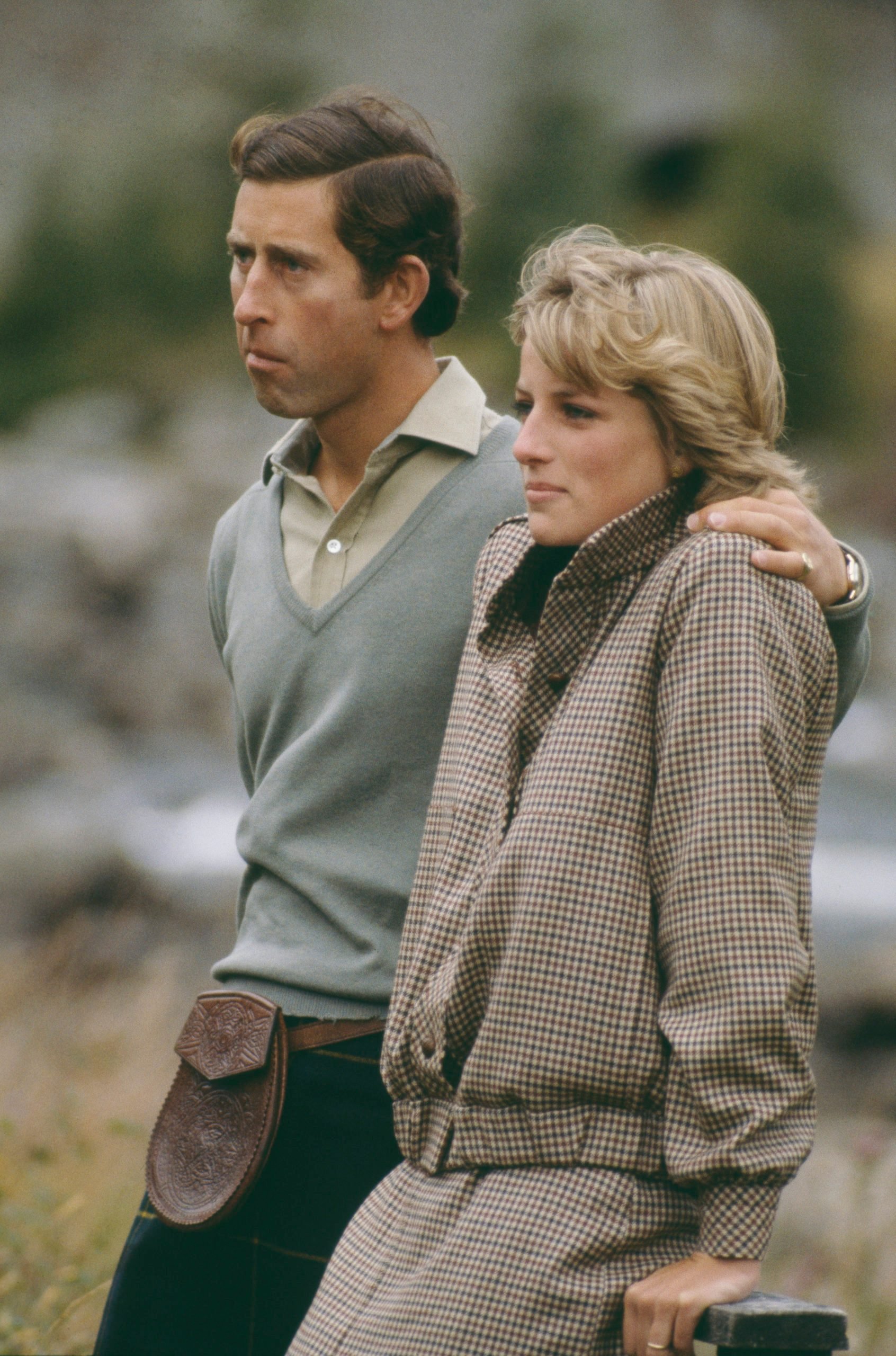 In the case of Prince Charles and Princess Diana, it would appear the honeymoon never really began. As Diana later recalled, she knew, even before the wedding that Charles didn’t love her the way she wanted to be loved— because of these four words Charles said offhandedly to a reporter. Then it only got worse. Throughout the honeymoon, Charles found reason after reason to call his former girlfriend (and future second wife), Camilla Parker Bowles. He also wore cufflinks monogrammed with the initials “C” and “C,” intertwined. But for those of us who were not there, the evidence can now be easily found in this photograph from the tail end of their honeymoon, when they were visiting Scotland. To Wood, it appears Diana is experiencing a cold chill, her shoulders up at her ears as Prince Charles awkwardly encircles her with his arm. While it could be that Diana was bristling at the presence of cameras, it seems, in hindsight, more that she senses his suppressed anger and feels a sense of foreboding. Here’s why Charles didn’t marry Camilla Parker Bowles in the first place. 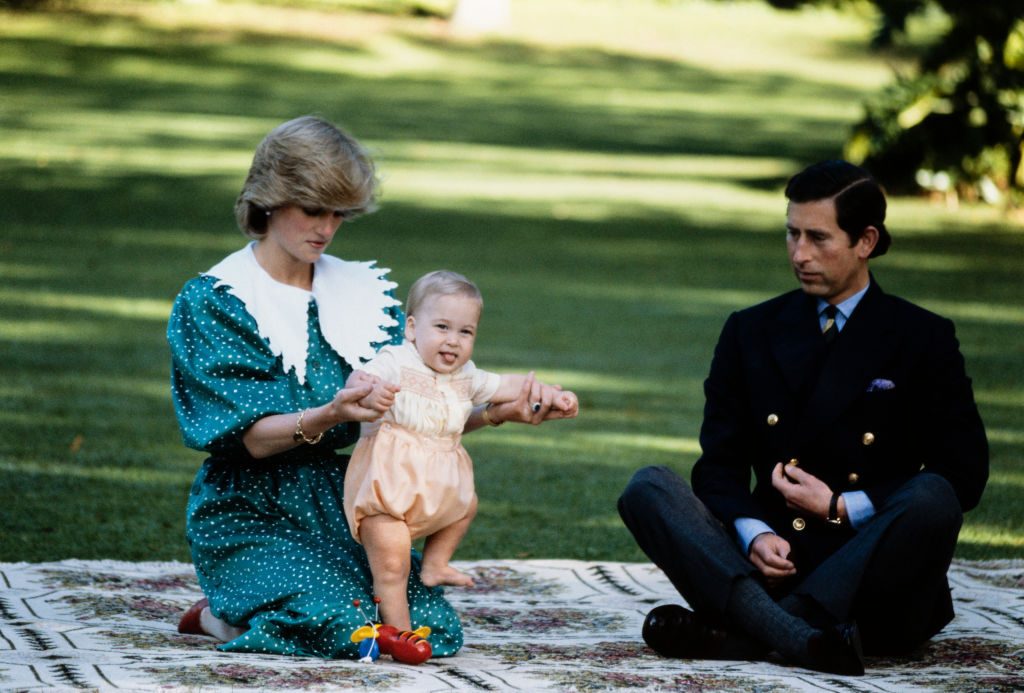 This wasn’t the “three of us” Diana was referring to

“There were three of us in this marriage,” Diana famously told journalist Martin Bashir, “so it was a bit crowded.” The third she was referring to was not Prince William, who was born less than a year after the wedding, but to Parker Bowles, with whom Charles was involved in an extra-marital affair throughout most of his marriage to Diana. “What’s stunning about this photo taken on April 23, 1983, is how far Charles is sitting away from his wife and child,” Wood notes. “He sits cross-legged like a child, himself, his arms out of reach for comfort or play, his hands in his lap instead of reaching out to his new family.” As for Princess Diana, she is clearly engaged deeply with her new baby. Her focus is on William, not on the cameras, and not on her husband. Don’t miss these 13 rarely seen photos of William and Diana. 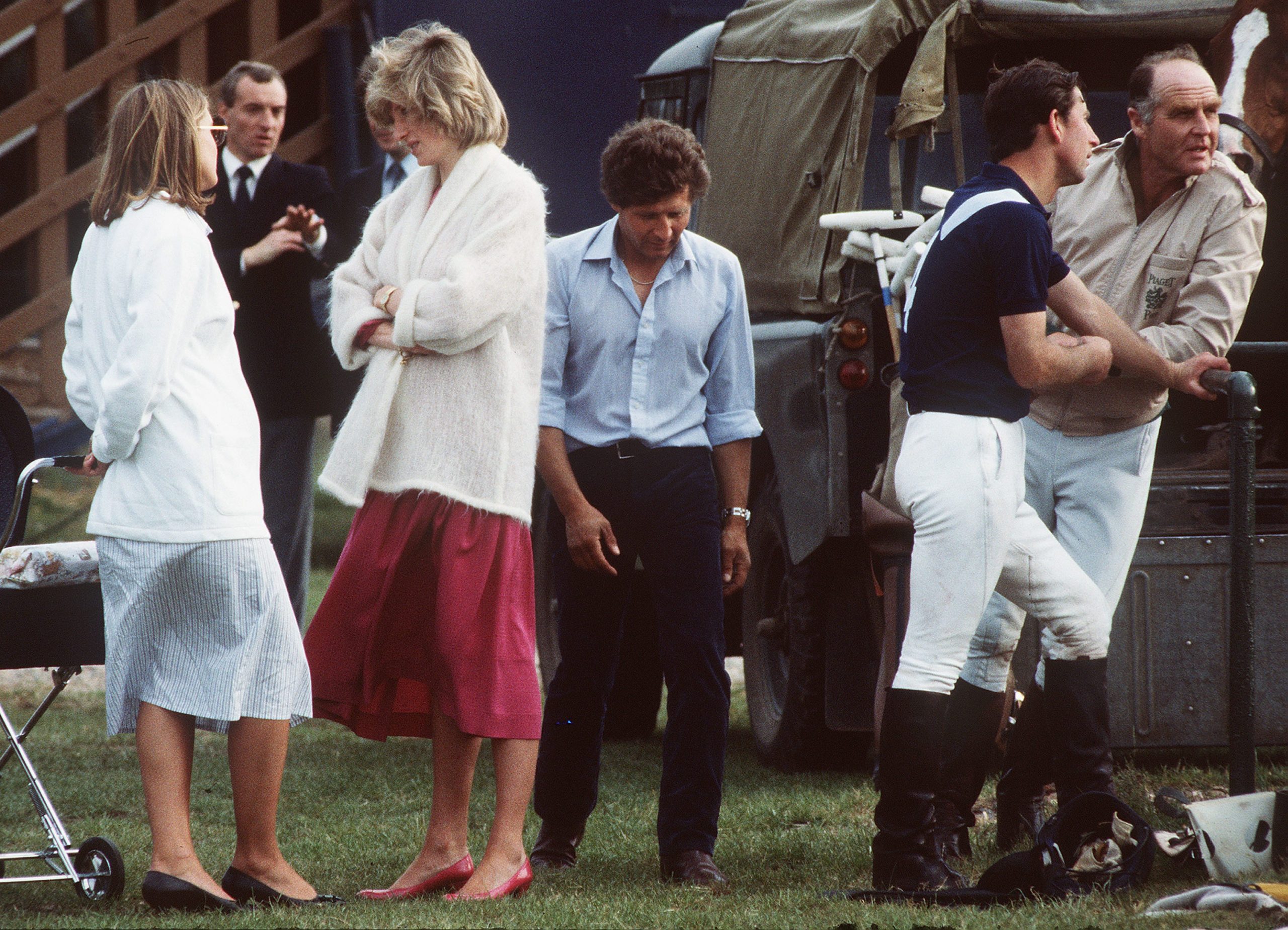 In this photograph taken at a polo event in June 1984, the Princess of Wales, pregnant with Prince Harry, who will be born in September, has her back to Prince Charles, who is chatting with Barry Mannakee, a bodyguard for Diana, with whom Diana later admitted to having a long-term affair. Clues to the affair lay in Diana’s posture: her arms are folded tightly and her feet planted far apart as if in fight-mode. Charles aggressively leans into Mannakee, invading his space, perhaps to assert dominance, or perhaps in an attempt to extricate himself from the scene altogether. Mannakee, for his part, simply looks away. A year later, he would be transferred from his post because of his “inappropriate” relationship with Diana. Two years after that, he would be dead in a motorcycle crash that Diana believed, until her own death, may have been a royal-related murder. Yes, a royal-related murder. We’re not saying that they actually happen, but here are 13 of the biggest unsolved mysteries surrounding the royal family. 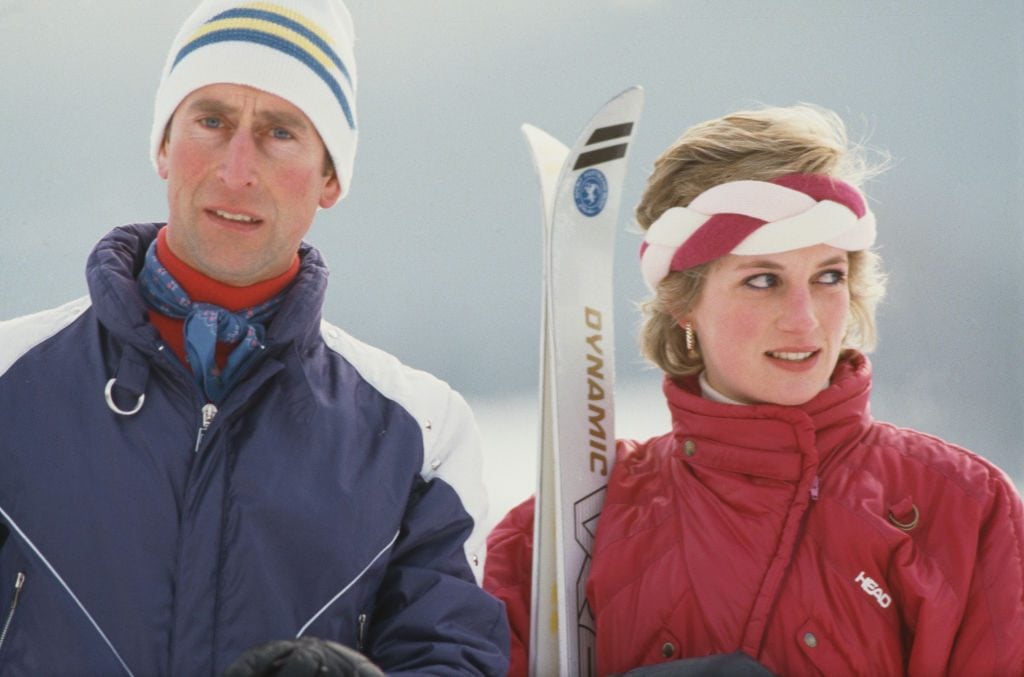 Charles and the “other woman”

In this photo taken in January 1986 during a Swiss ski holiday, even if you weren’t aware that Charles had already begun rekindling his affair with Camilla, you would sense something is very much amiss in his marriage to Diana. These are two people who are so out of sync with one another, they can’t even get it together for the camera, according to Wood. The disconnect between Prince Charles and Princess Diana can be felt even more poignantly when comparing this photo with many of these joyful and intimate photos of Prince William and Kate Middleton. 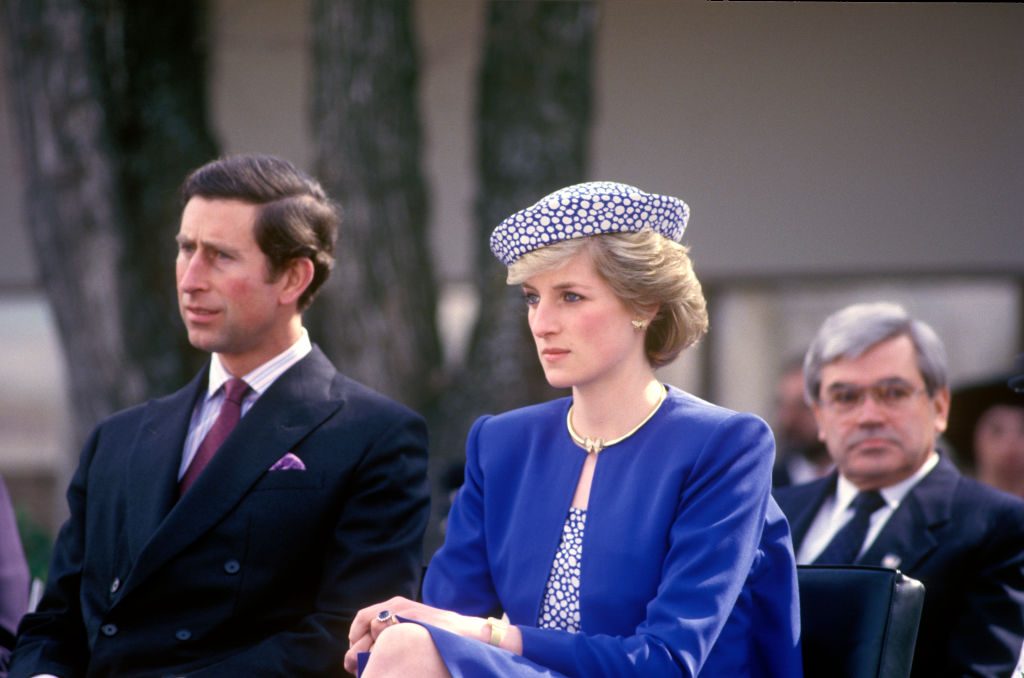 From bad to worse

Later in 1986, on a trip to Canada, the body language between Prince Charles and Princess Diana appears so disconnected, it appears the two are not even a couple, Wood points out. “If you look at their sad expressions you might think they are at a funeral. See how Diana grips her hands, I would guess in an attempt to suppress her sadness.” 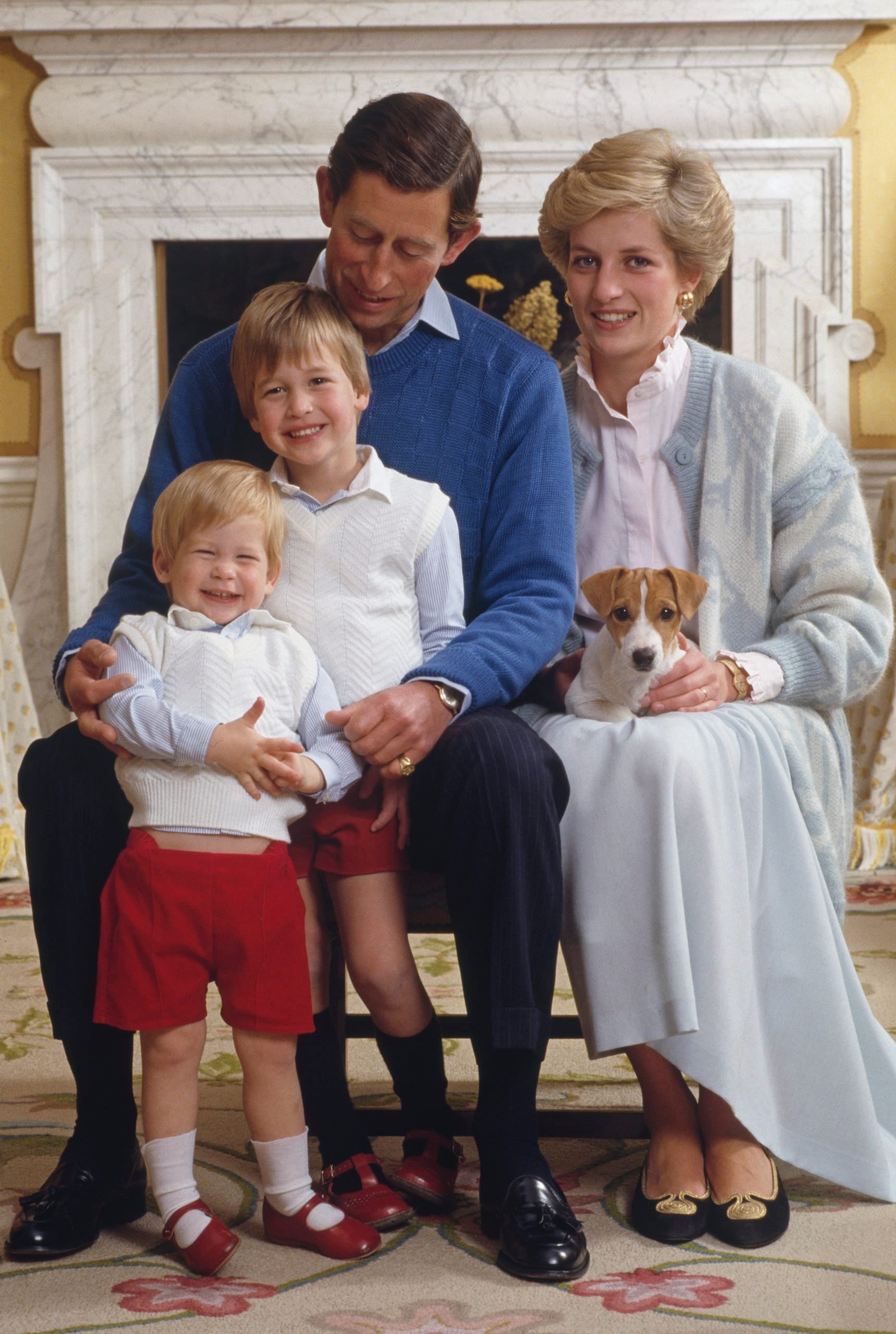 That “all is lost” moment

By the end of 1986, this Christmas photo of the Wales family is a tragic testament to Diana being edged out of the royal family. In this otherwise warm and cuddly photo of familial bliss, it appears as if Diana were photoshopped in. Or perhaps it was intended she would be photoshopped out? In either case, it’s becoming clear that although Diana would always be a loving mother to her two precious princes, she was not long for the royal family. Here are the 9 things Princess Diana lost in the eventual divorce…and only one is about money. 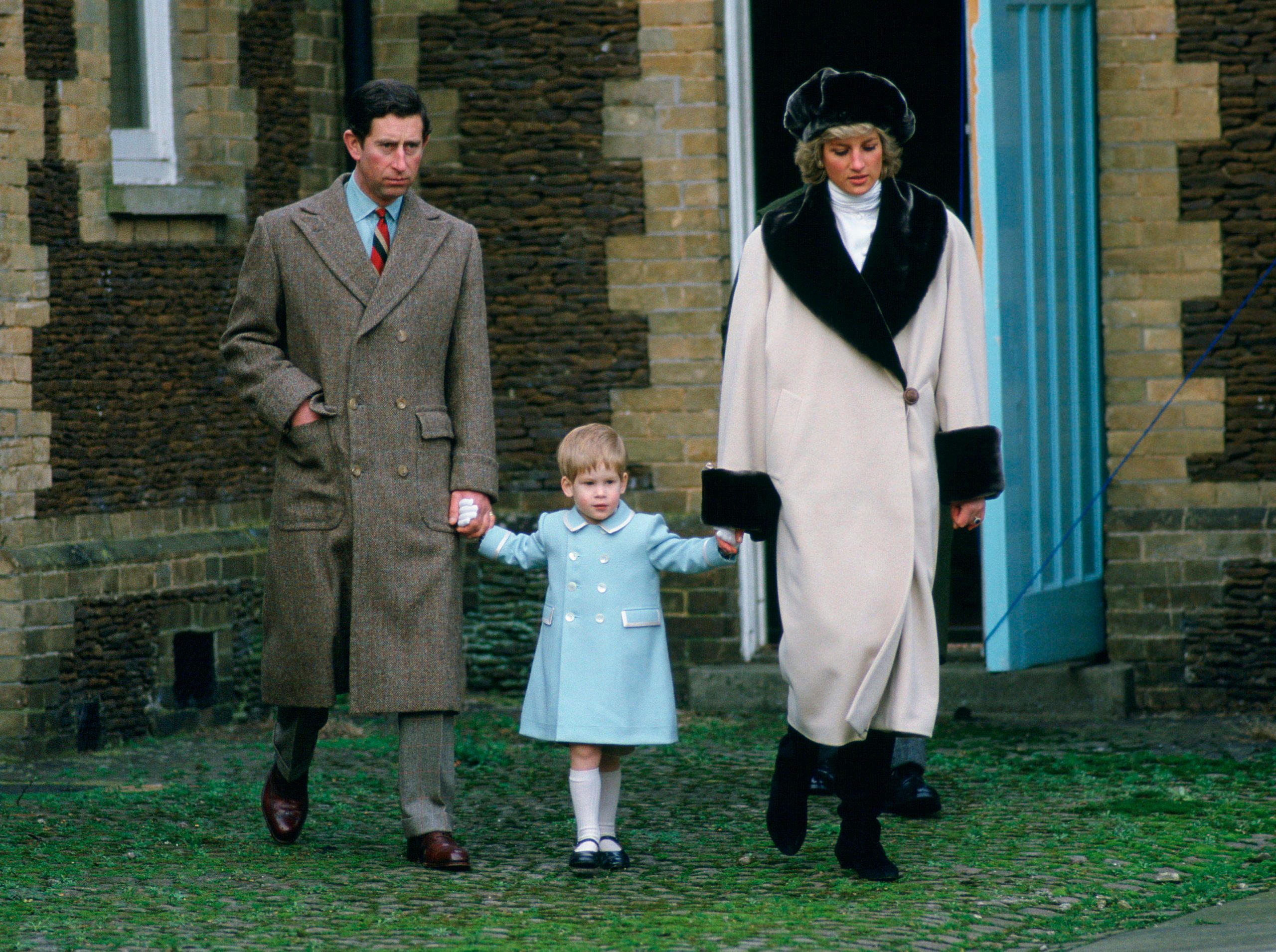 The parental picture of gloom

Pity poor little Prince Harry. Just a tiny tot in a bright blue coat, knee-socks, and Mary Janes, he innocently holds onto the hands of both his parents as the three walk together through an English courtyard. While children often intuit the truth that adults attempt to hide from them, Harry would have been too young here to really understand that his parents no longer loved one another, if they ever really did. Charles stares straight ahead. Even though he holds Harry’s hand, Wood points out, he is clearly focused on something that is causing his brow to furrow in anger. Diana, for her part, looks down, perhaps submissively, or perhaps chastened. For some happier images, check out these 15 rarely seen photos of Diana with Harry. 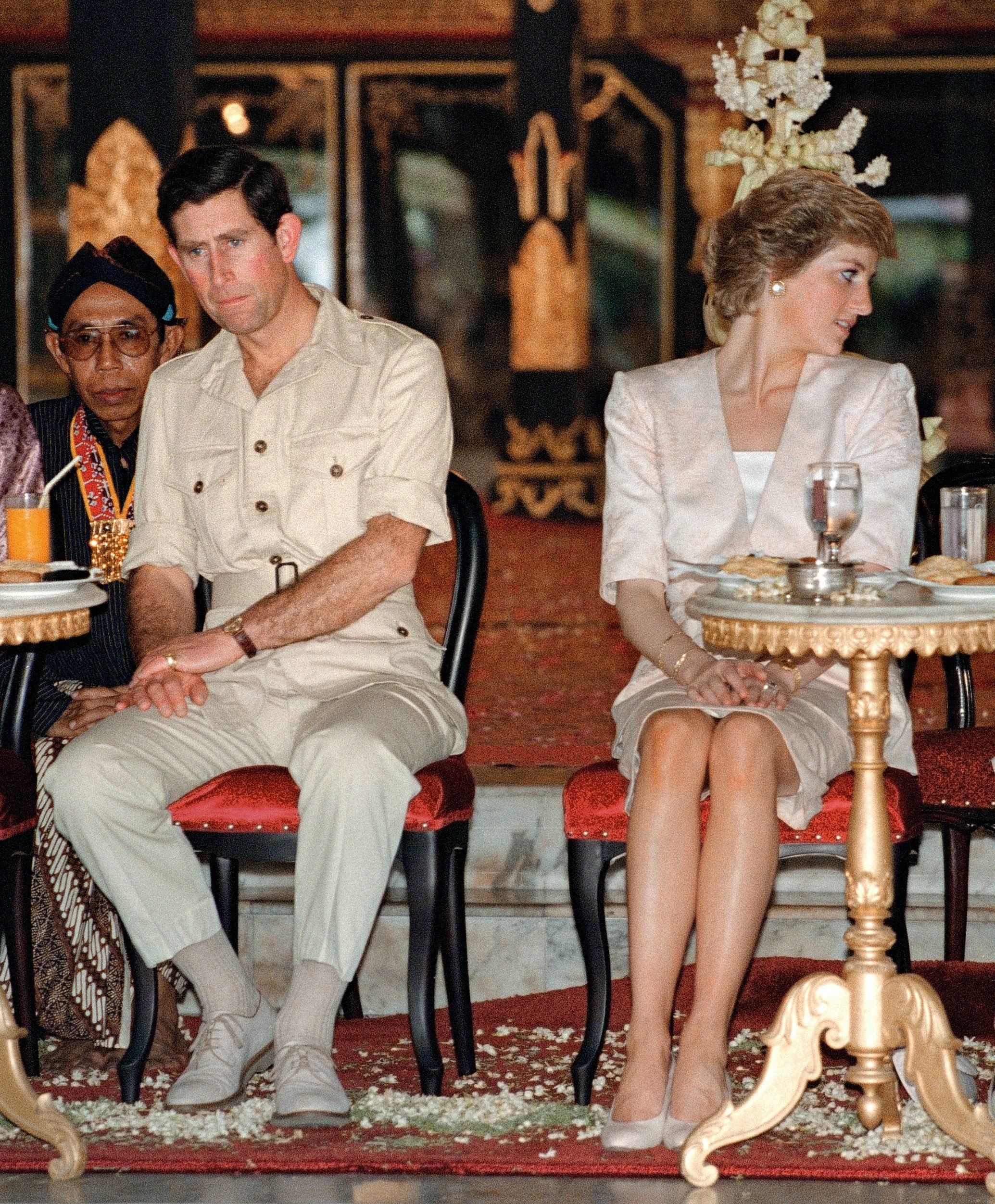 By the time this photo was taken in 1989, everything’s already out in the open vis a vis Charles and Diana’s respective extra-marital dalliances and their mutual marital unhappiness. In fact, earlier that same year, Diana even came out to Camilla that she knew about Camilla’s affair with Charles. Of course, this was after Diana and Charles announced that they were officially separated. With no need to hide their feelings, both Charles and Diana wear their displeasure with one another boldly. “His shoulder turned away, his mouth tightly sealed,” Wood points out, “it’s as if Charles was forced by his mom to take this girl he doesn’t like to the school dance.” Diana sits properly, her legs drawn closely together. “Sexual intimacy is off the table and out of the question.” And just to be sure, Diana’s hands are folded protectively in her lap. 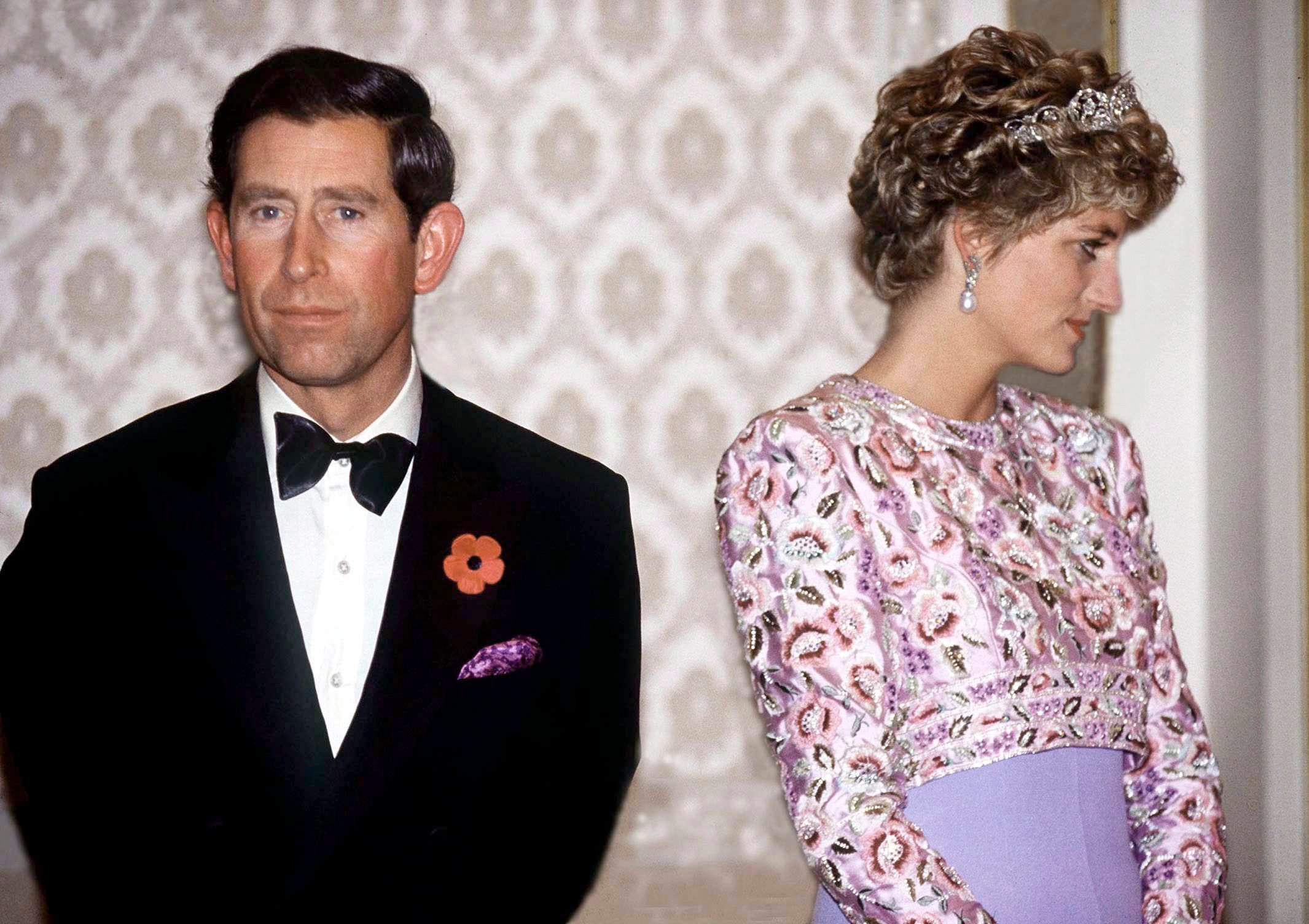 In late 1992, three years after all was already “said and done,” Prince Charles and his not-quite-yet-ex wife Diana take one last official trip together to South Korea. Again, Wood sees in their body language two people who just wish they could be anywhere else with anyone else. He’s gazing up and away as if she’s not even there. And she’s not merely 90 degrees turned away from him, she’s turned away just about as far as she can be without turning to face the wall. Ever wonder what really happened between Prince Charles and Princess Diana? It’s not quite as simple as you might think.

Together, but only in their apartness

Although Charles and Diana are attending an event on the royal calendar together, they are not together (although they’re not yet divorced, and that may be, in part, because Diana never wanted to be divorced). Diana seems almost relieved, but at the same time, Wood can’t help but notice Diana is shielding her pelvis with both her arm and her hand. Although she appears lighthearted, it’s as if she can’t help but be preoccupied with protecting herself. Wood also notices that Charles has now abandoned any effort to appear that he is connected to Diana in any way; whereas in the past, he would point at least some part of his body towards Diana, that is absent here.

Next, read on to find out what Wood has to say about the secrets hidden in these 11 iconic photographs.