A Body Language Expert Weighs in on 11 Iconic Photos

Think you know what's going on in these famous photos? Let's see what a body language expert has to say about that.

A picture is worth a thousand words

Patti Wood has been called the Babe Ruth of body language because when it comes to reading nonverbal cues, you can count on her to knock it out of the park. Wood, who holds advanced degrees in body language and nonverbal communication and is the author of several books on the topic, including SNAP: Making the Most of First Impressions, Body Language & Charisma, is frequently called upon by law enforcement, hospitals, universities, government agencies, and the media to decipher what’s really going on in a tricky situation. When Reader’s Digest spoke with Wood about the following historic photographs, we thought we knew what she was going to say, but as it turns out, we were a little off. Read on to see if you’re as surprised as we were. And if you’d like a quick primer on body language before delving in, we’ve got 8 simple tips on how to decode it right here.

It can be tough to catch an actor off-guard (since actors tend to be good at acting), but that’s exactly what the camera did in this iconic photo from 1957. At an industry party in Los Angeles, Sophia Loren is seated at a primo table with several important Hollywood businessmen of the day, and Jayne Mansfield shimmies over to Loren’s table to say hello. At first glance, it might appear that Loren, exuding confidence at center “stage,” is unruffled. What Wood sees is a bit more complicated, however, with Mansfield aggressively pointing her “assets” toward the table and Loren responding by placing a hand on her head. Wood explains this “crowning” gesture is a move on Loren’s part to retain her dominance, not to mention the attention of the men at the table. See if you can guess in which decade these iconic photos were taken.

Hitler, revealed, in the presence of a child

This 1935 photograph of Adolf Hitler attempting to engage with a young girl reveals more about Hitler than he ever would have wanted anyone to know, according to Wood. Having pored over thousands of images of Hitler, Wood has come to understand that although Hitler welcomed photo opportunities with children—perhaps in a bid to make himself seem likable—neither he nor the children seemed at ease in the resulting photos. In this particular image, the young girl seems to be doing everything in her power to keep Hitler at a distance. Her right elbow is bent sharply as if to keep Hitler away, and her left elbow seems poised and ready to join in if need be. Hitler doesn’t seem any more comfortable than the girl as he hunches awkwardly behind her as if cowering. If you find this fascinating, check out these other rarely seen photos you won’t find in history books.

The politics of body language

In the aftermath of World War II, three leaders of the Allied forces met in Yalta to declare their status as victors over the Axis powers. Seated from left to right are British Prime Minister Winston Churchill, U.S. President Franklin D. Roosevelt, and Soviet leader Joseph Stalin. Although each is, in fact, a world leader, the way each is carrying himself reveals much about the actual political dynamics of the time.

Roosevelt is at the top of the power pyramid, central in the photo, his legs spread wide, his toes pointed outward as if embodying the United States, taking up as much space as possible, literally and figuratively. Although Churchill seems happy, confident, and open, at least for the most part, Wood sees it as “telling” that he is clutching something protectively in front of his belly. It’s as if he knows that he (and his nation) remain vulnerable. Seated to their left, Stalin is clearly the odd man out. One hand protects his belly, the other is angled away, and one foot seems poised and ready for flight. It’s as if Stalin is subconsciously conveying that he’s not “all in.” These are the 10 body language secrets that will make you more successful.

The handshake that never happened

In this history-making photograph from President Donald Trump’s February 2020 State of the Union address, House Speaker Nancy Pelosi reaches out to shake the president’s hand. Were you surprised when Trump rebuffed her? Wood wasn’t. At the moment this photo was taken, Wood could see exactly what was about to unfold. Although Pelosi’s hand is extended, it’s as stiff as a hand can be, its fingers crammed together and pointing downward. Although her mouth and eyes are hard and unfriendly, Trump doesn’t even look up to see them. His eyes are fixed on Pelosi’s hand, and he’s “literally giving her the cold shoulder,” Wood explains. Frowning hard, he looks down his nose with apparent disgust. Perhaps it’s just as well that the handshake never happened.

By the time Charles and Diana posed for this photograph during an official trip to South Korea in 1992, their marital unhappiness wasn’t news to anyone, least of all Wood, who had taken note of signs of discord between the two ever since their courtship days. Here, she points out that they are standing apart and turned away from each other. And as if to drive the point home further, they are actually angling their heads away from each other. Diana seems to be fiercely protecting herself, her arms folded tight across her body, while Charles appears to own all the power in their relationship, his arms folded behind his back in a gesture of quiet authority. Here’s what really happened between Prince Charles and the Princess of Wales.

In love and scrutiny

In this photo, which was taken shortly after Meghan and Harry announced that they would be stepping down as full-time royals, Wood sees both the love between the couple and Harry’s awareness that he is about to be placed under public scrutiny. The two are holding hands, and Harry is pulling Meghan’s hand even closer to his body, a gesture of affection and intimacy. Harry’s other hand is in front of his belly, a defensive posture we’ve been seeing Harry take for years but far less since Meghan entered his orbit. Well, it’s back, Wood notes, likely reflecting Harry’s understanding that the public has more to say on this topic. Here are 14 ways that Meghan has changed Harry since she became a royal.

The epic love between Carole Lombard and Clark Gable is apparent in this photo of the couple on their wedding day in 1939, according to Wood. They’re grinning naturally, their bodies are relaxed, and they lean into each other, touching in a mutual way that reveals deep, sincere attachment. The way their forearms and hands are interwoven, it’s almost as if they are joining forces and gaining strength from each other, Wood notes. Tragically, their marriage lasted less than three years. In January 1942, Lombard died in a plane crash. Gable went on to marry twice more, but when he died in 1960, his wish was to be buried beside his first wife, his beloved Carole. And he was. Did you know that your sleep position can also reveal a lot about your relationship? 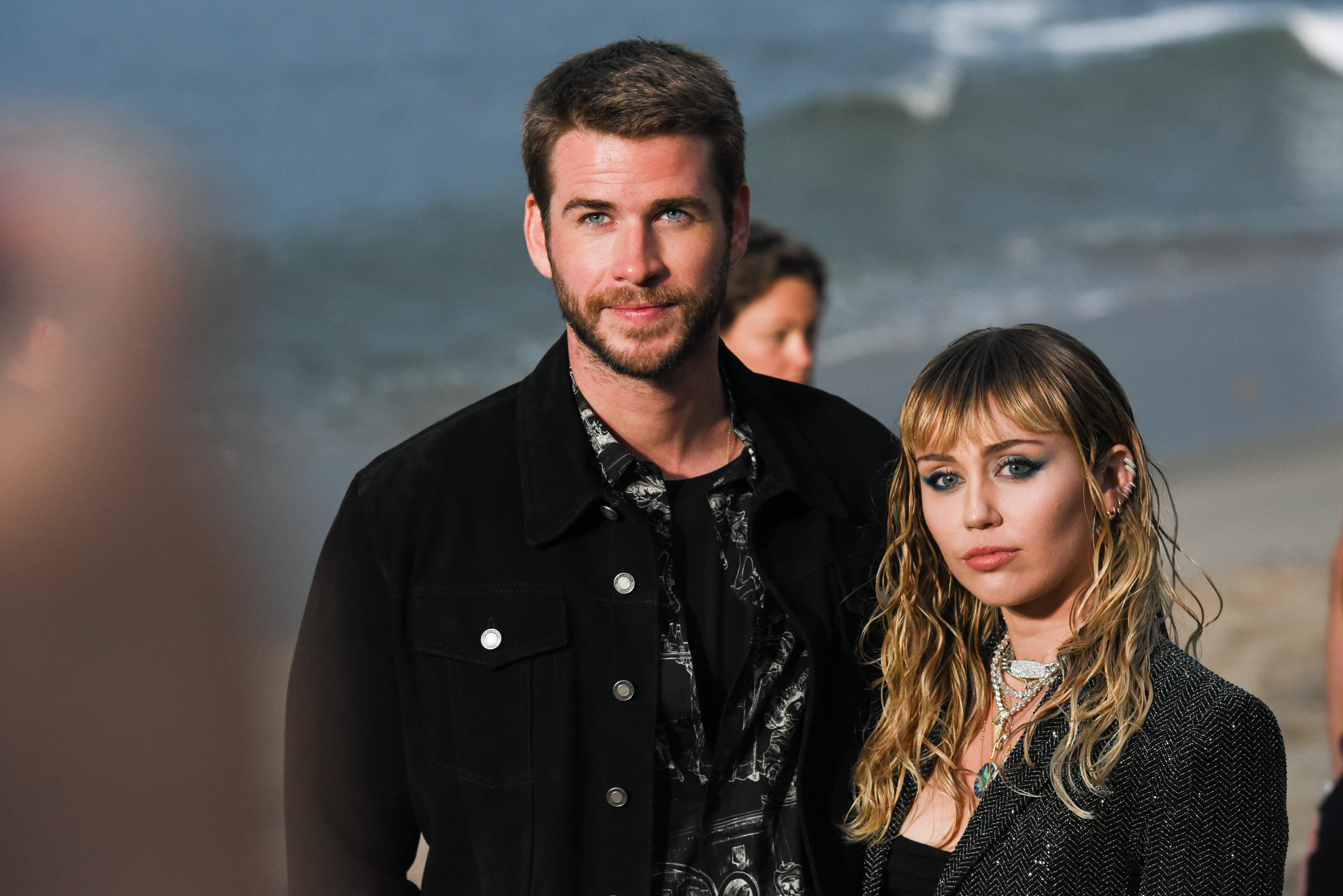 A 10-year romance on its last legs

In “couple” photos, Wood tends to look for mutual eye-gazing and intertwined limbs. Neither is present in this photo of newlyweds Miley Cyrus and Liam Hemsworth. The couple, who had been dating on and off for a decade, finally tied the knot in December 2018. They split for good in August 2019, just a few weeks after this photo was taken, in which the two are disjointed and seem to have been cut and pasted from separate photos, if not separate lives altogether. Even having had the opportunity to pose and put on a happy face for the camera, it’s as if the two can’t help but appear sad and wistful. By the way, this is why we get so upset about celebrity breakups, according to a psychologist.

Whether you agreed with his politics or not, it’s hard not to feel sorry for President Richard M. Nixon when you consider the deep conflict his body language conveys in this photo, which was taken during his scandalous resignation. While Nixon offers a “thumbs up” as if to say everything’s cool, there’s nothing cool about his facial expression. Nixon’s gaze is cast downward and his jowls and eyebrows are drooped, as if he’s feeling deep shame. But the way his nose wrinkles and the corners of his mouth turn downward also suggest to Wood that Nixon is experiencing some level of contempt for the system that betrayed him and undermined his presidency. In addition to the mystery surrounding the lost Watergate tapes, here are the presidential mysteries that have never been solved.

In this photo of President Trump reacting to his acquittal on two articles of impeachment on February 6, 2020, it’s clear that Trump is both elated by the decision and disgusted that there even had to be a trial. But what’s most curious about this photo is the body language of his wife, Melania, Wood notes. As Melania turns from her husband to address the crowd, her mouth is smiling, but everything else about her is tense, almost frozen. Her hands are clutched tight. Her arms are drawn in closely at her sides. It’s almost as if she’s feeling terrified—perhaps of making the wrong move or of displaying the wrong emotion. Don’t miss these 9 photos that launched popular conspiracy theories.

A tender moment right in the middle of it all

In this photo of Michelle and Barack Obama, taken at the 2009 Inauguration Ball, all of the signs that Wood looks for in happy couples are present. Their fingers are relaxed and intertwined, with their fingers pointing up. His eyes are focused on her with desire, his pursed lips mimicking the kiss he is probably imagining giving her later. Michelle’s response is to look down, almost coquettishly, in what Wood says is a subconscious act of courtship. Did you know that Michelle and Barack met while Barack was a summer associate at Michelle’s law firm? Here are body language tips for better relationships.