Yes, Disney World is open again. But it's certainly not quite the same as the park you once knew and loved. Here are some things that the House of Mouse is changing in the wake of COVID-19. 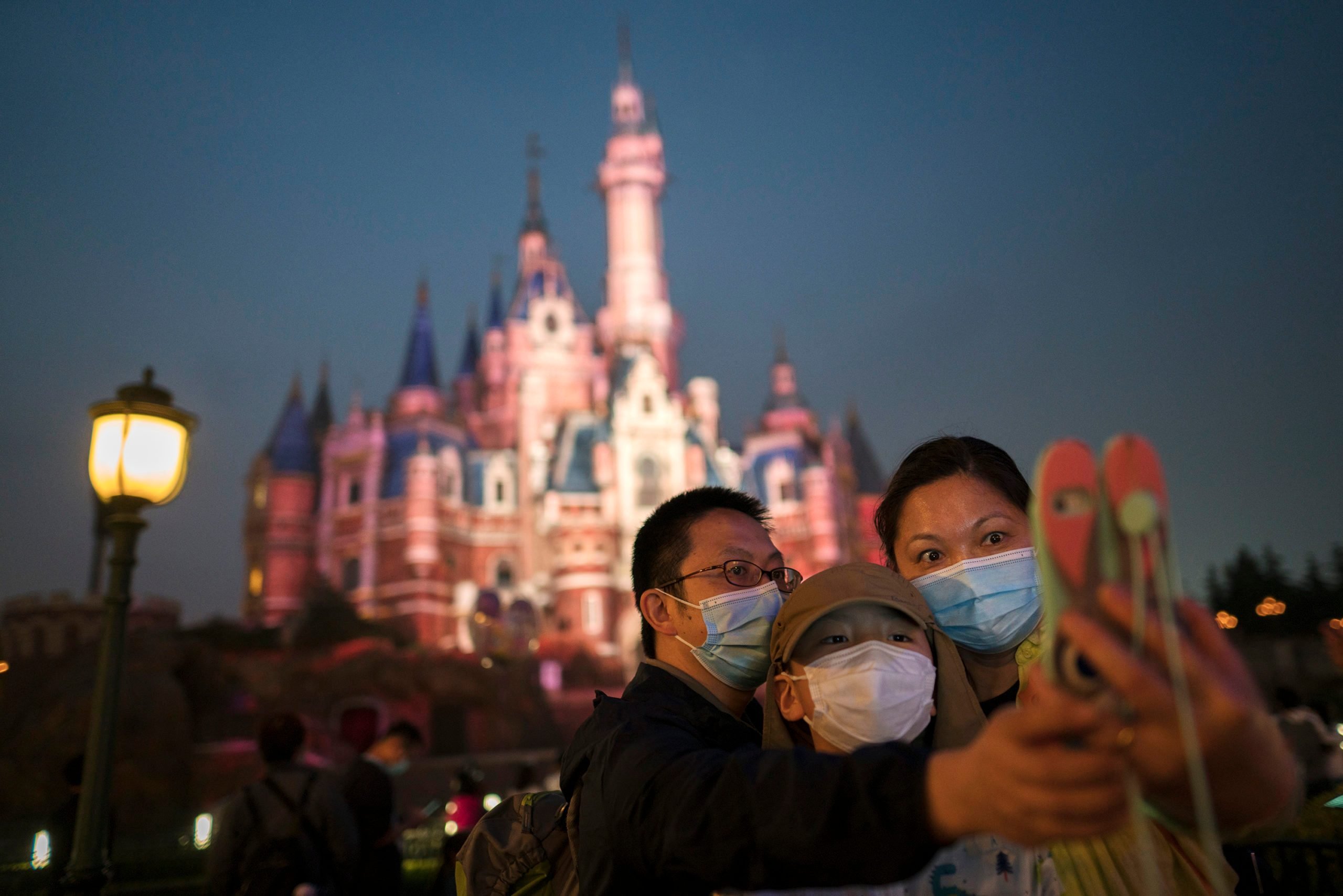 But even Disney magic can’t make the novel coronavirus miraculously go away. Just ask Hong Kong Disneyland, which, after reopening in June, closed again in July when cases rose. Any Disney trip you take carries risk with it as everyday people and massive companies alike contend with a virus about which so much is still unknown. Likewise, lots of things we’re used to at the Disney parks are very different—or even temporarily gone—with the parks back open. Should you plan a Disney trip while COVID remains a threat? Here are some things to consider. Plus, learn more about the ways Disney World has changed since reopening. 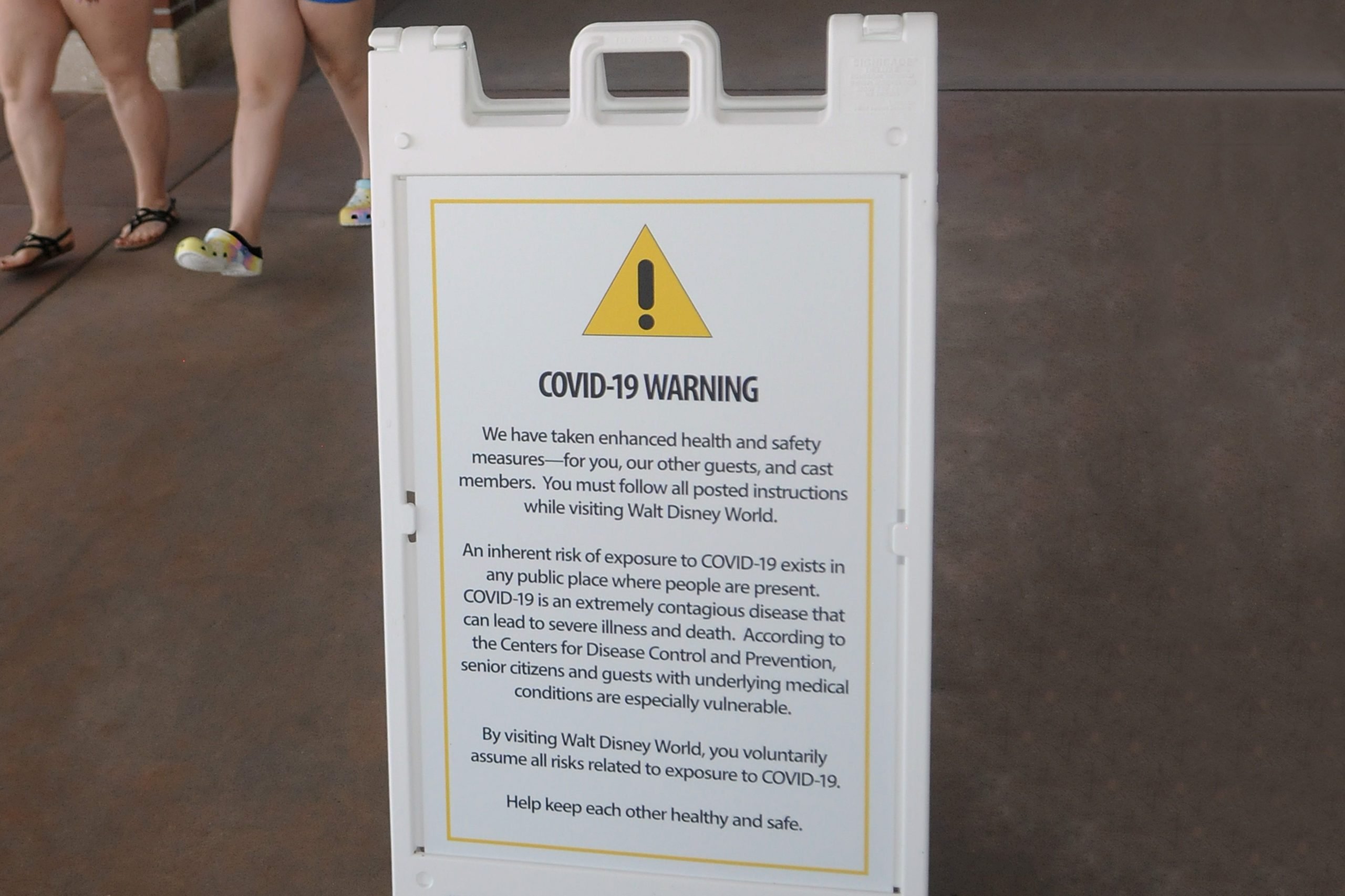 Disneyland is waiting a little longer

When reopening plans were first announced, Disneyland and California Adventure were originally going to reopen on July 17. But as cases spiked in California—and thousands of people petitioned the Walt Disney Company to postpone the reopening—Disney Parks decided to hold off. While Downtown Disney reopened on July 9 as originally planned, new opening dates for the Disneyland parks themselves have not been re-set yet. Learn what Disney World’s opening week was like from someone who went.

Since reopening during the pandemic, Disney World has had a new ticketing system in place. You’ll need to reserve your spot using the Disney Park Pass, a new system that requires you to have both a park reservation and valid park admission. With this system, you can buy tickets for dates through September 26, 2021; there’s a calendar feature that shows you which days have all parks available, which only have some, and which have none. Also, the amount of days you can choose varies based on certain circumstances of your ticket status. For instance, if you bought a ticket that you couldn’t use because of the park’s closure, or are an annual passholder, you have higher-priority ticket options. The park has a significantly lower capacity now, so you won’t see the massive crowds that are usually hallmarks of the Disney parks. Here’s an idea of how many people are being allowed into Disney right now. 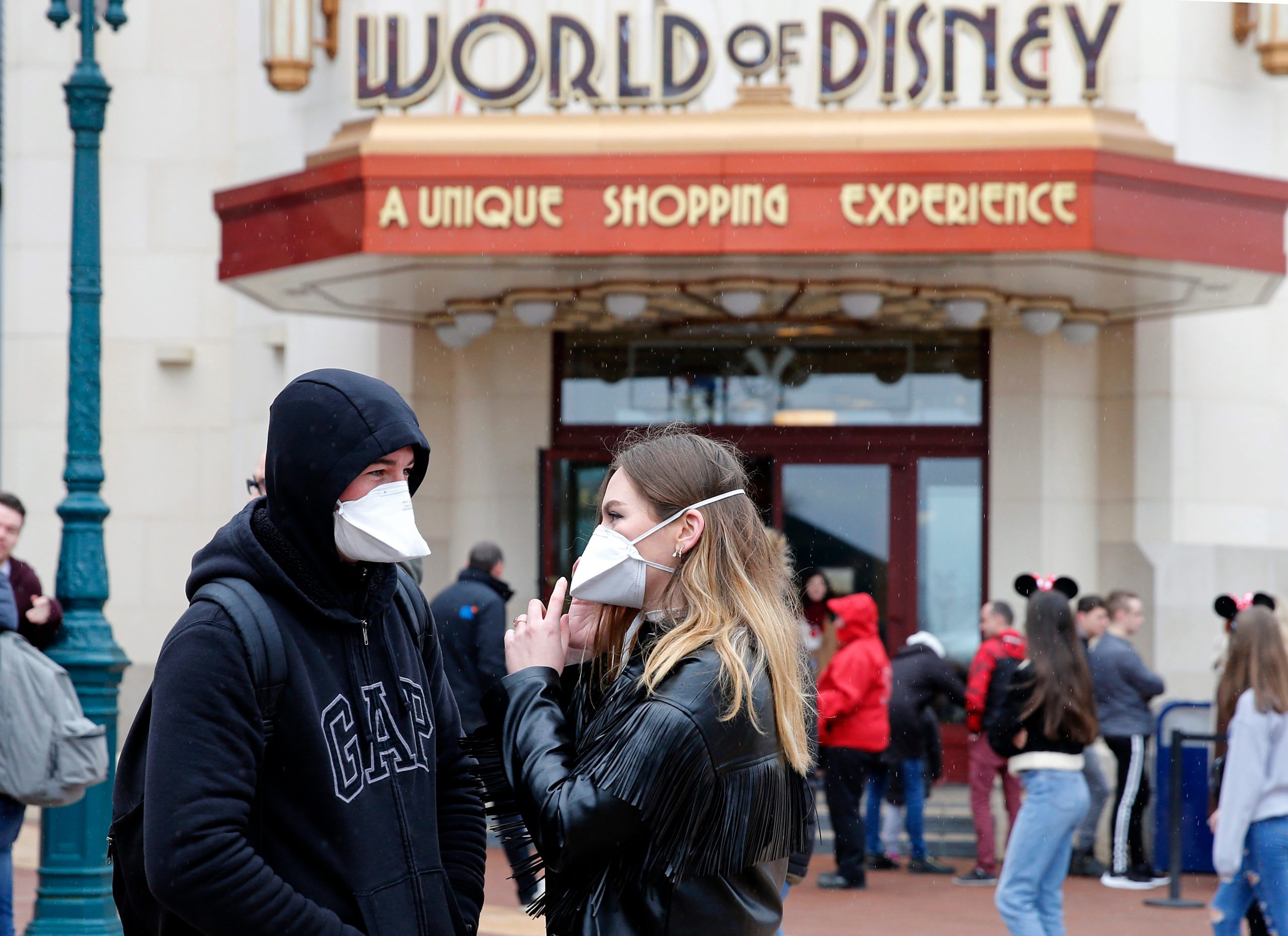 This shouldn’t come as a surprise. Just as masks have been required in Shanghai Disneyland since it opened in May, masks will now be an essential item to pack for your trip to Disney World. All guests ages two and up will be required to wear face masks inside the park. The only times you won’t have to wear a mask are while eating and swimming—and, per a post-reopening rule, you must stay in one spot while eating, so that you’re better able to abide by social distancing while your mask is off. While masks—costume masks—are usually prohibited at Disney World (and still are), you’ll now need a mask that covers your nose and mouth. So if you can’t imagine wearing a mask in the summer Florida heat, or trying to ensure that your young child keeps a mask on, you’ll want to hold off on your Disney trip. You can get your Disney fix by “taking” your favorite Disney World rides from home. 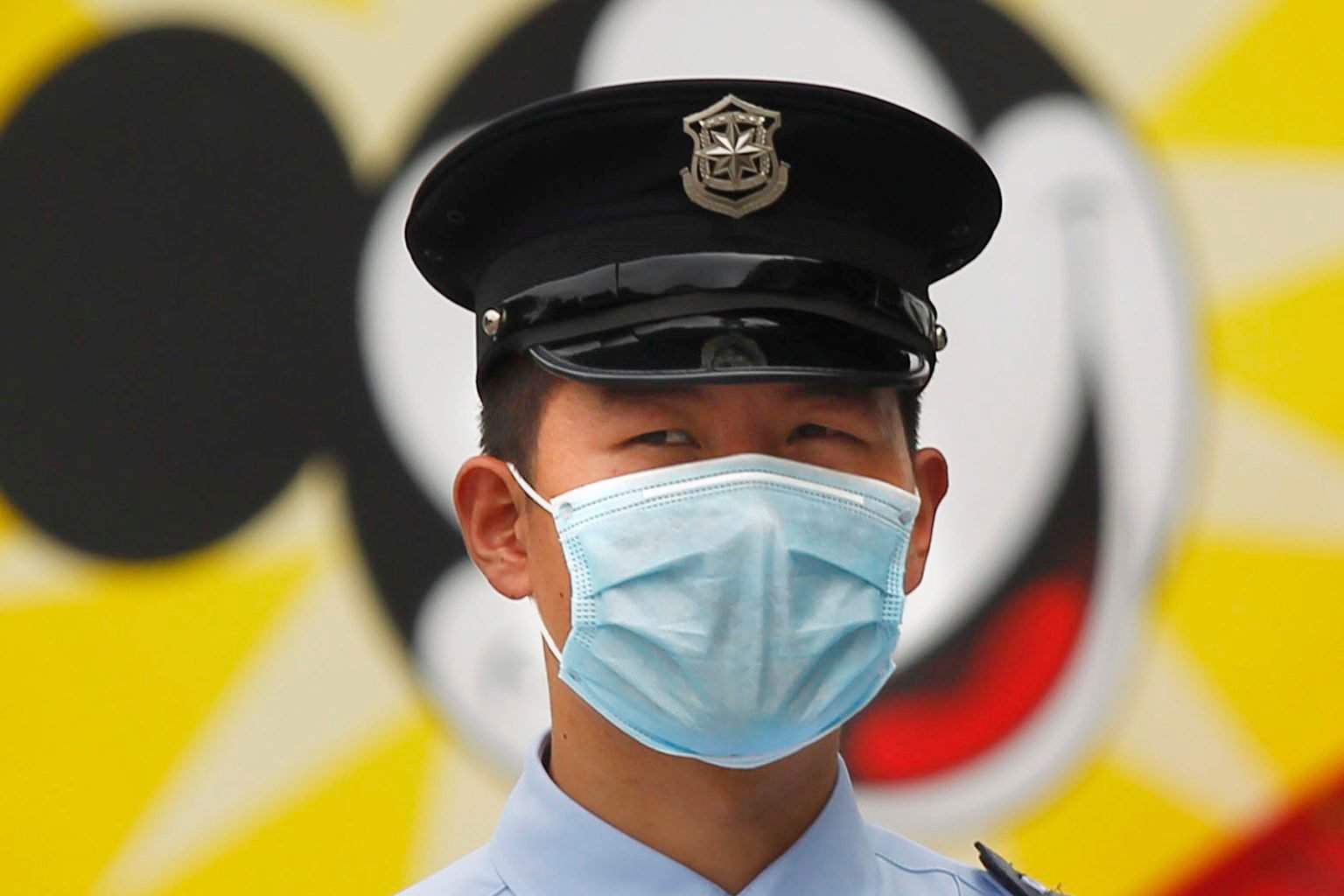 It’s not just guests who will have to wear masks in the parks. Cast Members (Disney’s umbrella term for employees, whether they play a character or not) will be wearing masks at the parks for the foreseeable future as well. “Go maskless” is one of the things Disney employees aren’t allowed to do anymore. 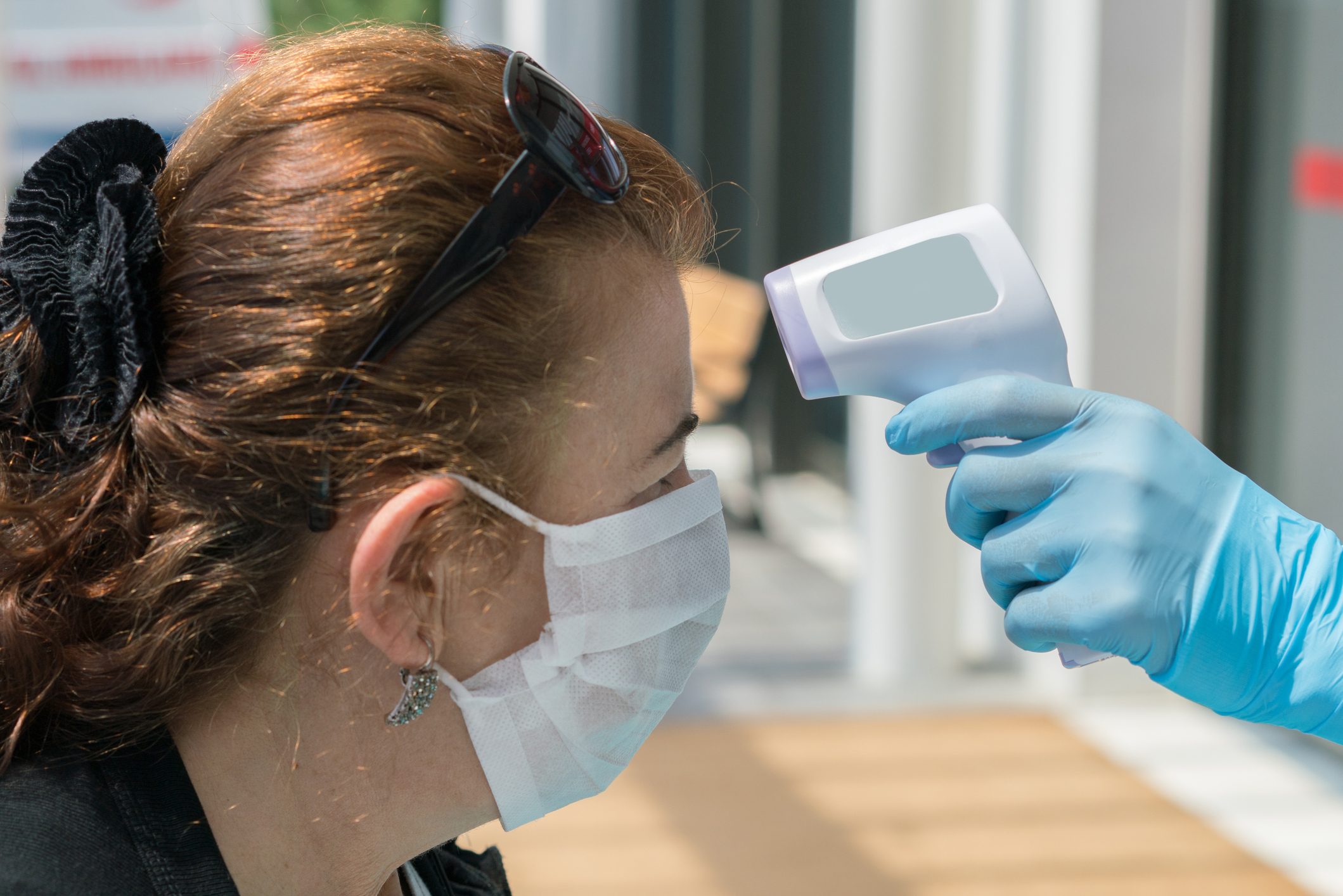 You’ll have your temperature checked

Just like temperature screenings are becoming the norm at airports and in some businesses, you’ll need to have your temperature checked before entering certain spots in the reopened Disney World. Yes, their site says “certain spots,” but that does, in fact, mean all four parks and Disney Springs. It also applies to the table-service restaurants at Disney Resort hotels. So if you’re going to the parks, the temperature check, as of press date, is a definite. Anyone with a temperature of 100.4 degrees Fahrenheit or higher will not be allowed to enter, and neither will anyone in their party. You can attend in costume!

First, the bad news: Mickey’s Not-So-Scary Halloween Party, Disney’s annual spook-tacular bash, is canceled this year. But one perhaps surprising upside of all this madness is that Disney is now letting guests break a well-established rule. Famously, Disney World has forbidden guests ages 14 and older from wearing costumes to the park. This was because they didn’t want guests pretending to be a character, potentially undermining the actual Disney Cast Members or even promoting un-Disney-like messaging. So while little ones could arrive dressed up, older adults and teens had to settle for wearing merch with their favorite character on it—or attending the Halloween Party, a special event where costumes were allowed for everyone. But this year, seemingly because it’s canceled, they’re allowing all guests to come in costume from September 15 through Halloween. The only caveat is that costume masks that cover your entire face still aren’t allowed. 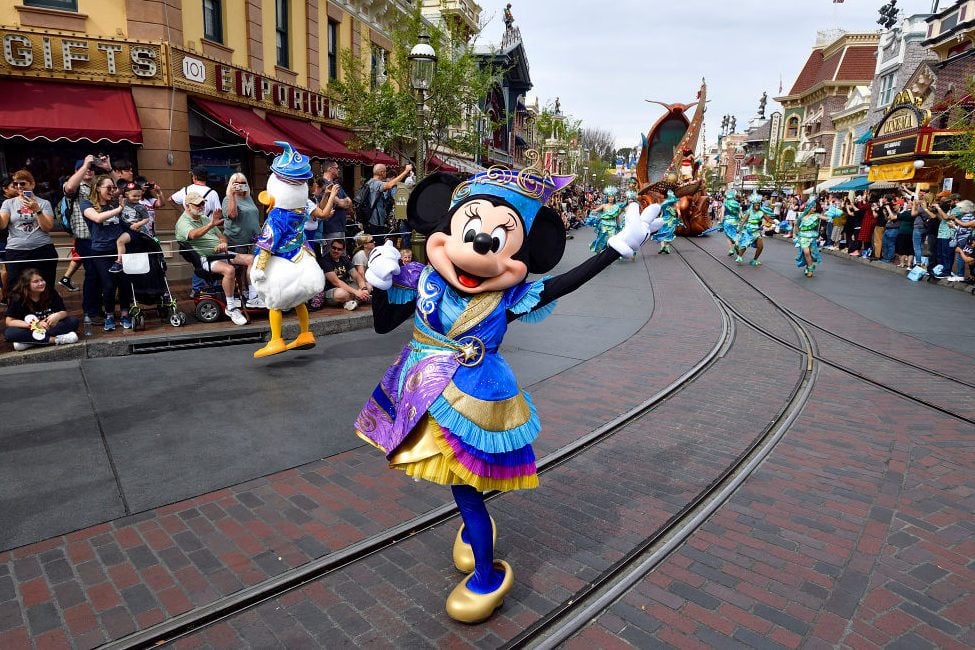 Sadly, but understandably, the park events that, by nature, involve gathering in crowds won’t be able to return as normal for a while. This means that shows like the Happily Ever After fireworks spectacular, the Festival of Fantasy parade, and the Hollywood Studios spectacular Fantasmic likely won’t be up and running right away. Before reopening, Disney World’s site warned that “experiences (such as shows, parades, and fireworks)…may have limited availability or may remain closed.” Continue checking the park’s website for updates on what will and won’t be open on the dates you choose to visit. Here’s more information on what to expect from Disney World’s reopening. 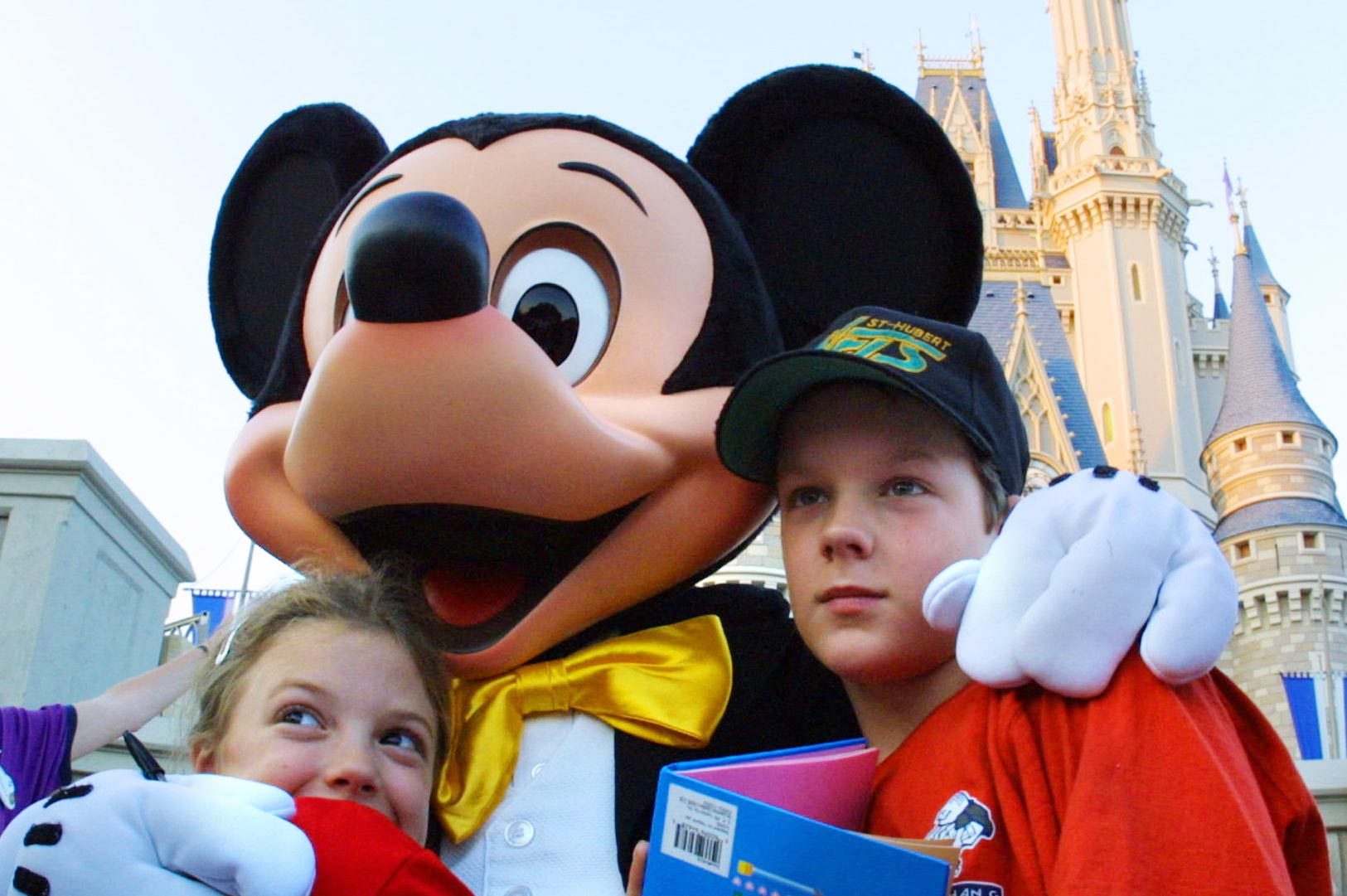 On the other end of the spectrum, just like crowded events, events, and experiences that require close proximity will also need to wait a little longer. This includes character meet-and-greets as well as hair and makeup experiences like the Bibbidi Bobbidi Boutique. Likewise, playgrounds will likely be off-limits for the time being. So if you can’t imagine a Disney trip without the opportunity to give your favorite character a hug, you’ll want to save your visit for a time when close-up experiences are a little safer. However, “characters will be in the parks in new ways to entertain and delight guests,” Disneyland’s public relations director promised. Here are some Disney characters that you couldn’t meet in the parks even prior to COVID. 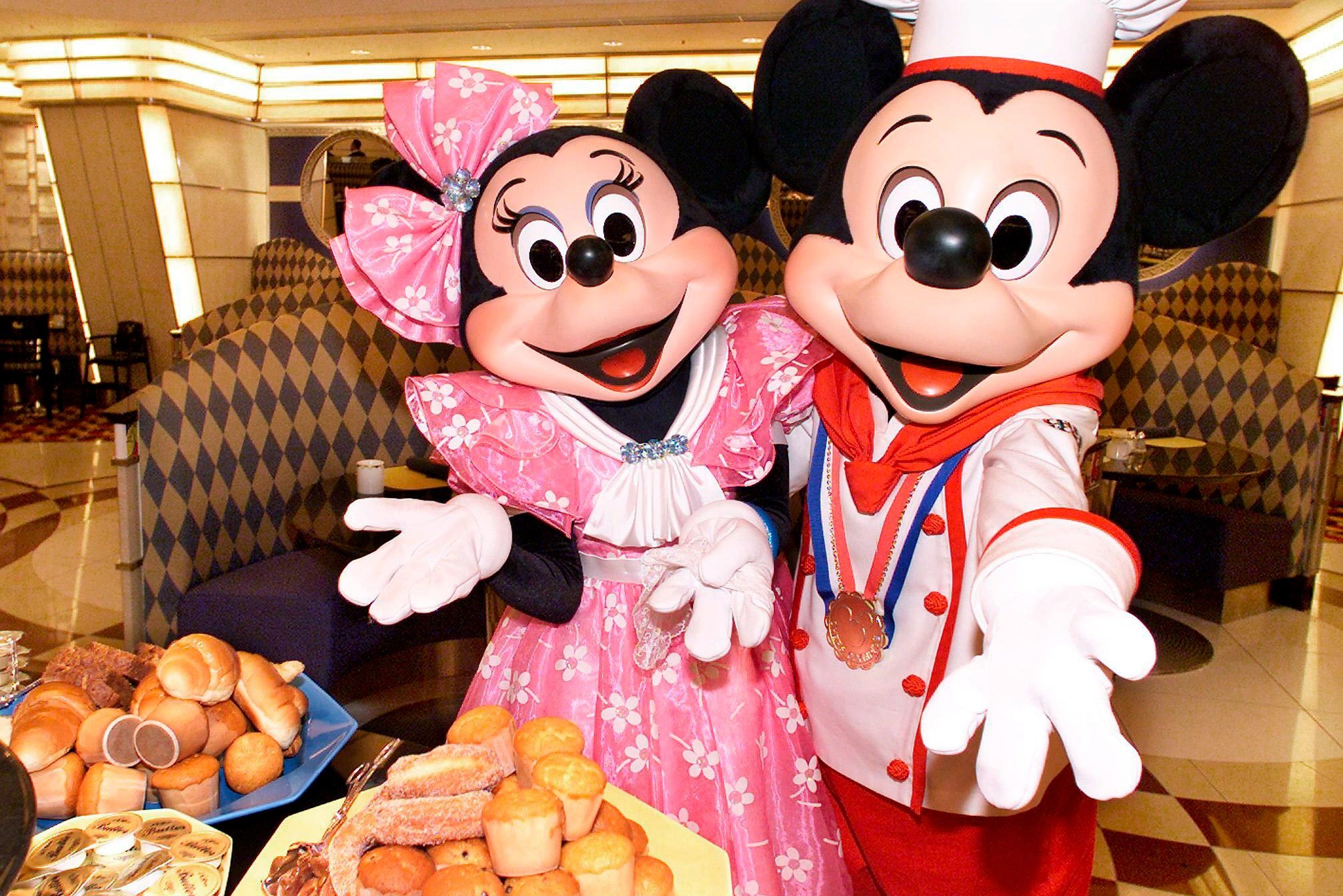 Yes, Disney World dining is (mostly) a top-notch experience. But it’s changing because of COVID-19. As of right now, dining reservations are available (and encouraged) up to 60 days in advance. Like many restaurants, Disney World is taking the utmost precautions to ensure that dining is as safe as possible: extensive cleaning, reduced-contact menus, and no self-service. In addition, Disney dining plans are currently suspended; you can’t add one to your reservation. Several other experiences are also suspended for the time being, including dinner shows, most character dining, and private dining. Luckily, we’ve got 12 Disney copycat recipes you can make at home. 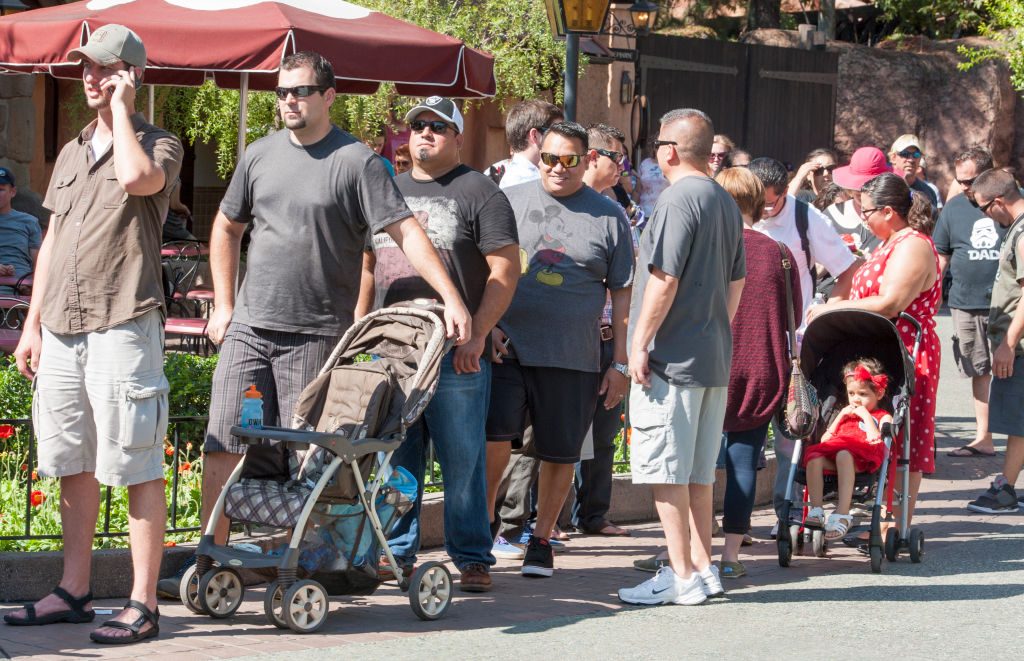 You could certainly consider this bad news (if you’re a regular FastPass+ user) or good news (if you usually glower at FastPass+ users as they pass). But, yes, all FastPass+ use is temporarily canceled. This is primarily because they’re allocating as much space as they can to allow for physical distancing in lines. Even existing FastPass+ selections have been suspended. You may be hesitant to travel to a Disney park now, but find out some ways you can still get away this summer. 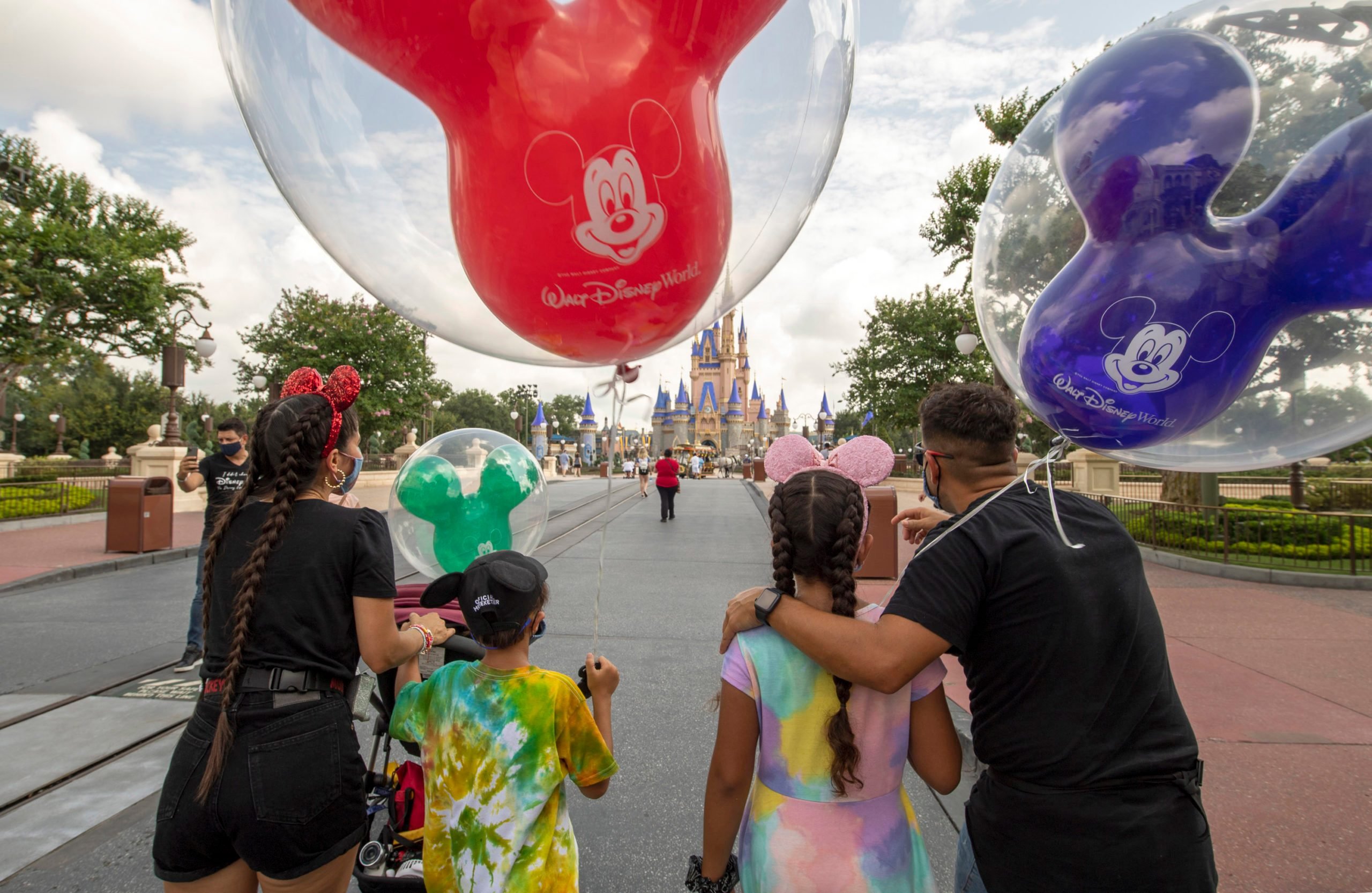 Hours will be reduced

Though Disney World’s opening day was a blowout, and ticket sales surged right when the site first started selling tickets for the reopening, attendance since then has actually been lackluster. It would seem that many people are still reluctant to visit theme parks, understandably. Travel itself can also be a challenge; Disney World has seen very few out-of-state guests recently. So, starting in September, they’re reducing their park hours to accommodate this. Starting September 8, all four parks are tweaking their hours; no park will be open later than 7 pm. The full updated hours will be:

Get a look at these photos of what the “new normal” at Disney World looks like now. 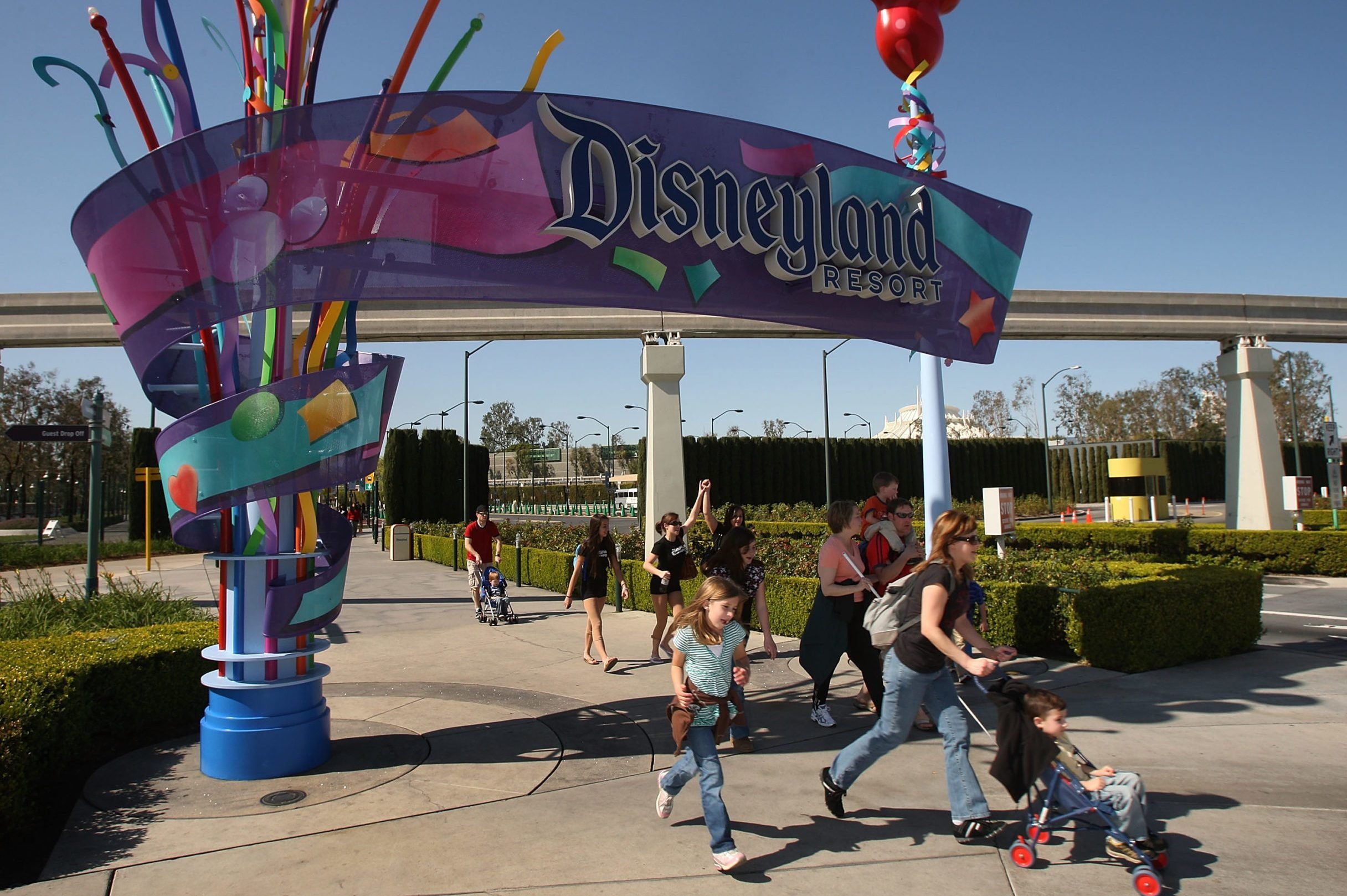 Disney aficionados know that Extra Magic Hours are a massive perk. They vary quite a bit by park and by day, but basically, they’re a few extra hours, before the park officially opens and after it closes, where guests staying at certain Disney Resorts can visit the parks. It goes without saying that if the regular hours are reduced, there’ll be no Extra Magic hours for the time being; but even before the regular hour change takes effect in September, Extra Magic Hours will not be available. Find out the things that are banned from Disney parks (a list that has unsurprisingly grown recently). 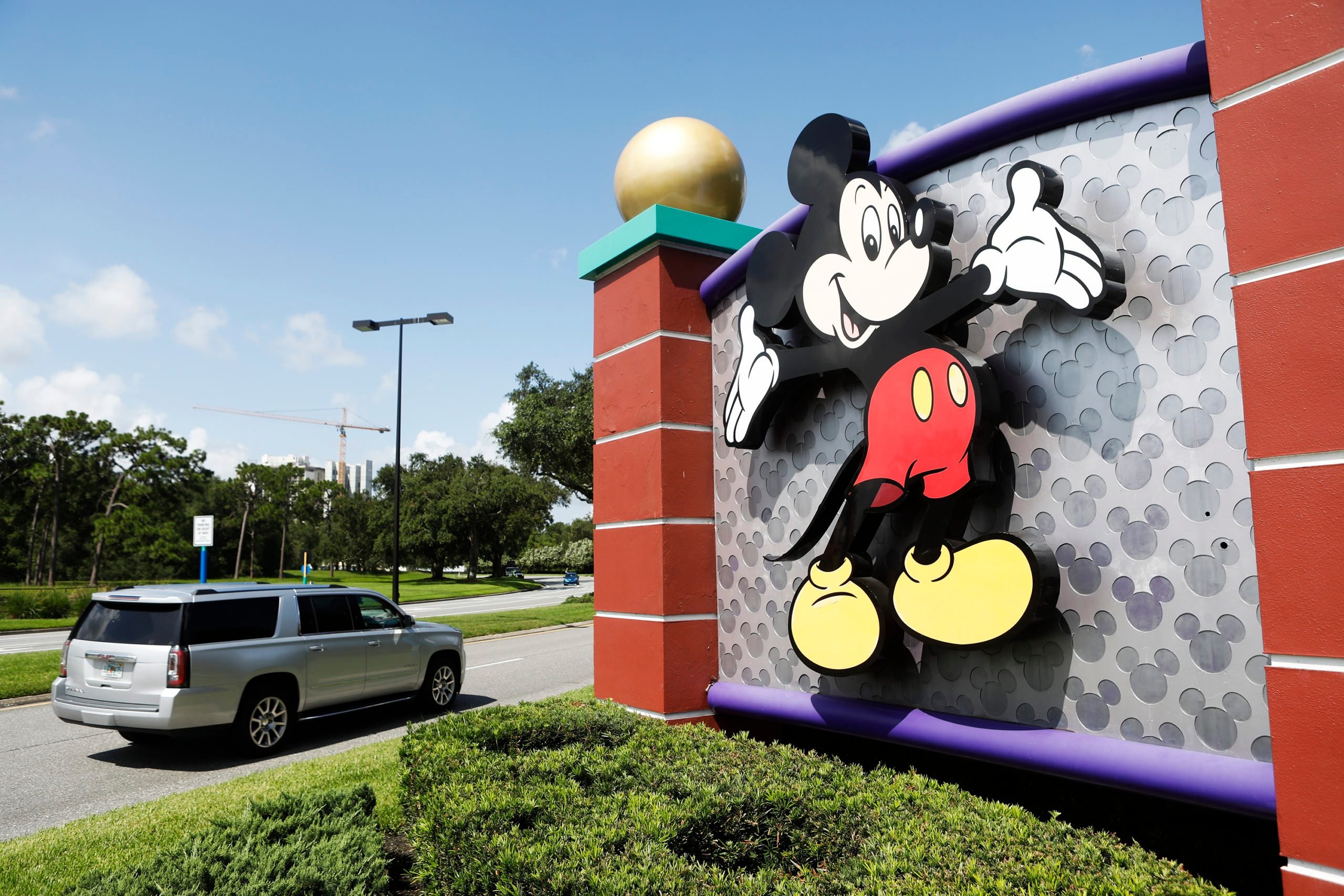 Park-Hopping, or visiting multiple parks in the same day, used to be a hallmark of Disney World, but such unrestricted movement is riskier during a global pandemic. The new Disney Park Pass system specifies that the limit for anyone purchasing a ticket is one park per day. So even if you had a Park Hopper ticket, you’ll only be allowed to visit one park per day. In a statement, Disney said that they “hope to bring back the ability to visit more than one park per day soon” and that Park Hopper passes will, for the time being, be available for 2021 tickets.

Splash Mountain will still be open

The news that Splash Mountain, the log flume ride in both Disney World and Disneyland, is getting a much-needed makeover may have left you wondering if the ride would even be open when the parks were back in session. Well, for better or worse, you’ll still be able to ride the original Splash Mountain when Disney World reopens; the official date has not been set for the closing and refurbishment of the ride. (And despite what this picture shows, you do need to keep your mask on on rides.) Next, here’s what to know about staying at a Disney resort hotel right now.