12 of the Funniest Presidential Campaign Slogans in U.S. History

Some of these political slogans definitely do not stand the test of time. 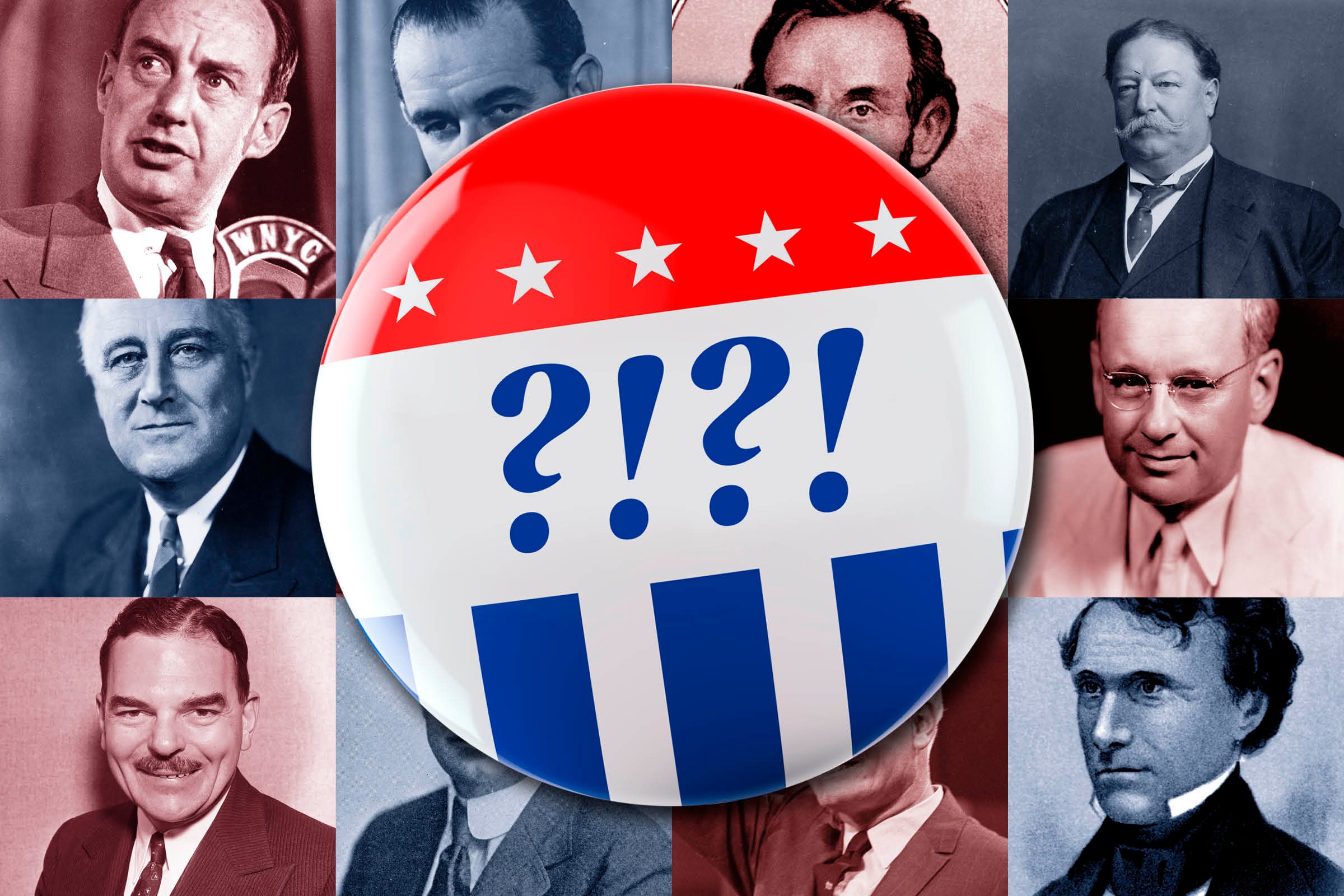 Selling a candidate to the voters

Presidential campaigns in the United States are as much about spectacle and showmanship as they are about actual policies—possibly even more so. And while technological advancements like television and social media have made national elections into even more of a circus than ever, the idea of candidates making themselves appealing and available to the masses is nothing new. From whistle-stop tours to the theatrics of debates, the major parties have been selling their presidential candidates since the country was founded. A key component of that strategy is having the perfect campaign slogan. Well, maybe perfect isn’t always the right word for it, but memorable, if nothing else—some even border on hilarious. And for even more election nostalgia, check out these 13 vintage campaign posters that will take you back. 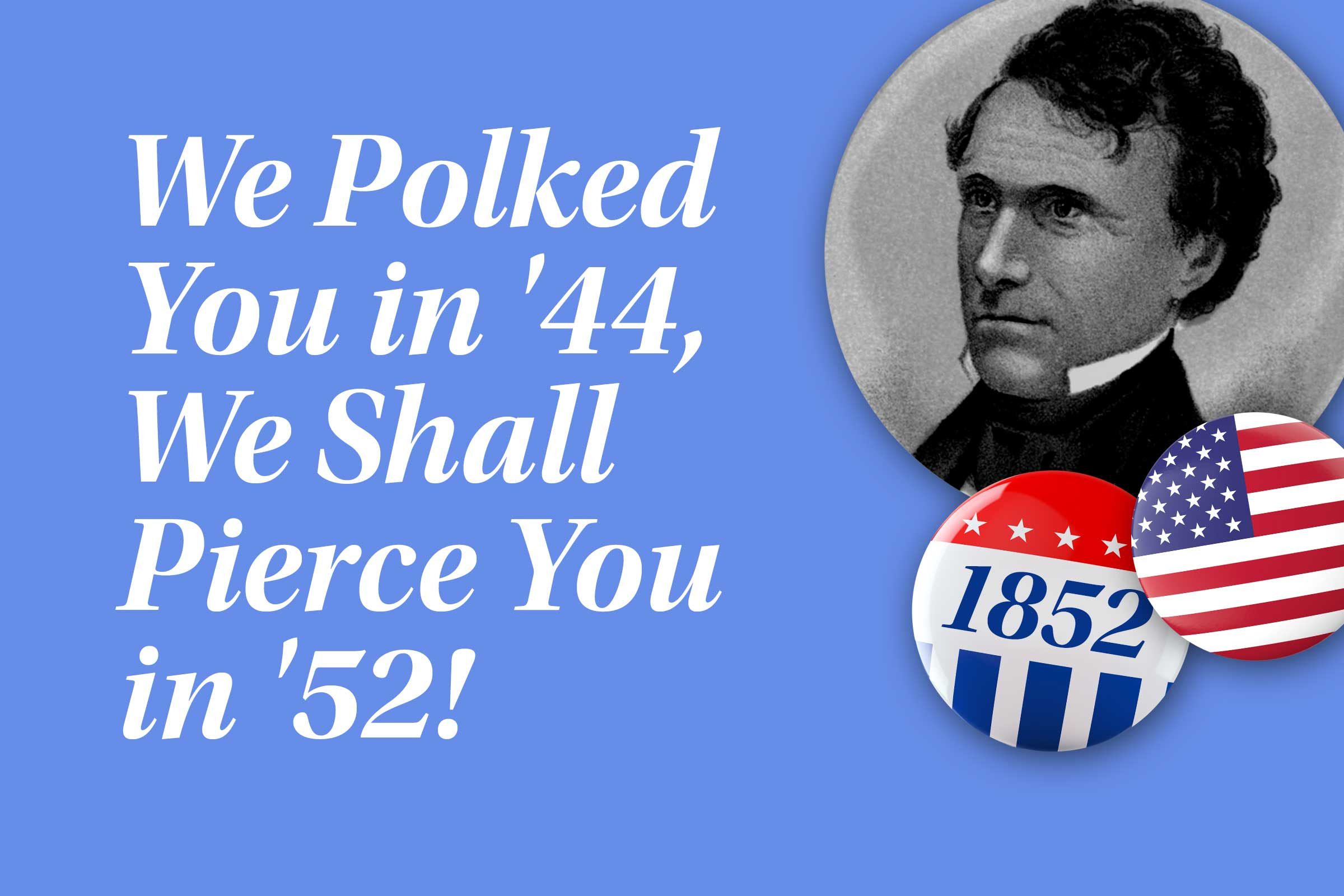 The electorate wants a presidential candidate with a plan, but this may not have been what the voters in the 1852 election had in mind. As antagonizing and borderline violent as it may sound today, the idea behind Franklin Pierce’s campaign slogan, “We Polked You in ’44, We Shall Pierce you in ’52,” had more to do with name recognition than any type of swordplay. This was the Democrats’ attempt to capitalize on the legacy of James Polk—who, like Pierce, started out without being widely known, then went on to become a popular president. It worked, and Pierce defeated the Whig nominee, General Winfield Scott. If this tickles you, take a look at the funniest joke told by 23 U.S. presidents. 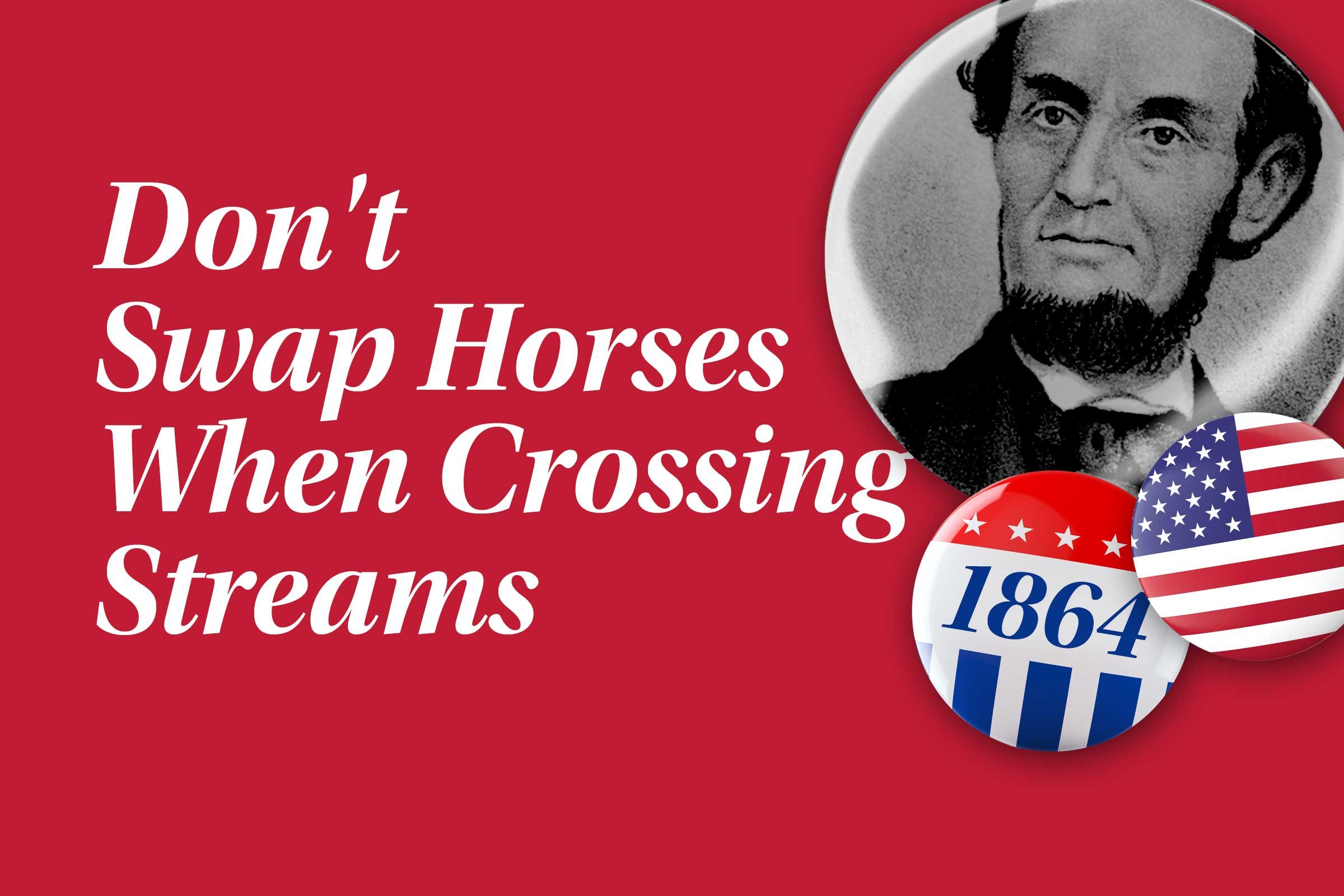 Though this may sound more like something you’d find written on a souvenir kitchen towel from a dude ranch gift shop, it’s actually Abraham Lincoln’s slogan from his bid for reelection in 1864. At this point, the Civil War was in full swing, and while it can be hard for us today to imagine a scenario today where Lincoln was defeated in the election, it was an outcome he was concerned about. The electorate at the time kept looking for new people to solve the country’s evolving problems, and prior to 1864, the last incumbent to be reelected was Andrew Jackson in 1832. Lincoln used his campaign slogan, “Don’t Swap Horses When Crossing Streams,” as his way of asking voters to stick with him during the times of conflict. And while you’re here, check out these 14 timeless Abraham Lincoln quotes. 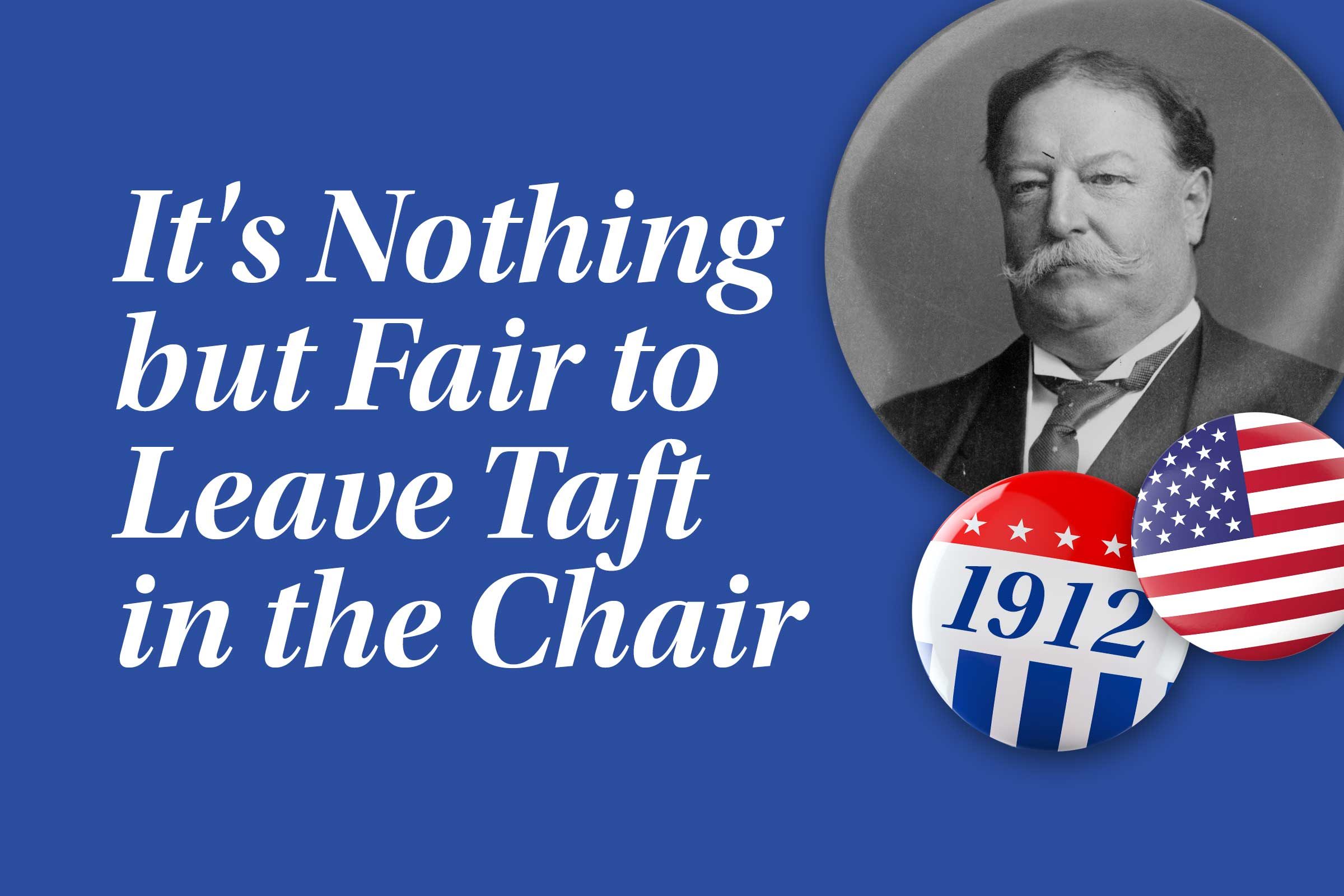 The 1908 election saw Republican William Howard Taft defeat Democrat William Jennings Bryan in his third attempt at running for president. This was thanks, in part, to the support Taft received from Teddy Roosevelt, the popular outgoing president. But come 1912, Roosevelt was back in the race—running for a third term as a member of the Progressive (“Bull Moose”) party. It was then that Taft’s team deployed his slogan, “It’s Nothing but Fair to Leave Taft in the Chair.” According to Kaplan, Taft was convinced of the idea that he was disliked by the electorate. “He hated being on the campaign trail, he always wanted to be golfing in his free time, he didn’t like working very much,” she told The History Channel. “His slogans, they make me chuckle because it’s like he doesn’t even want it.” Turns out, neither Taft nor Roosevelt would be returning to the chair: Democrat Woodrow Wilson was elected by a significant margin. 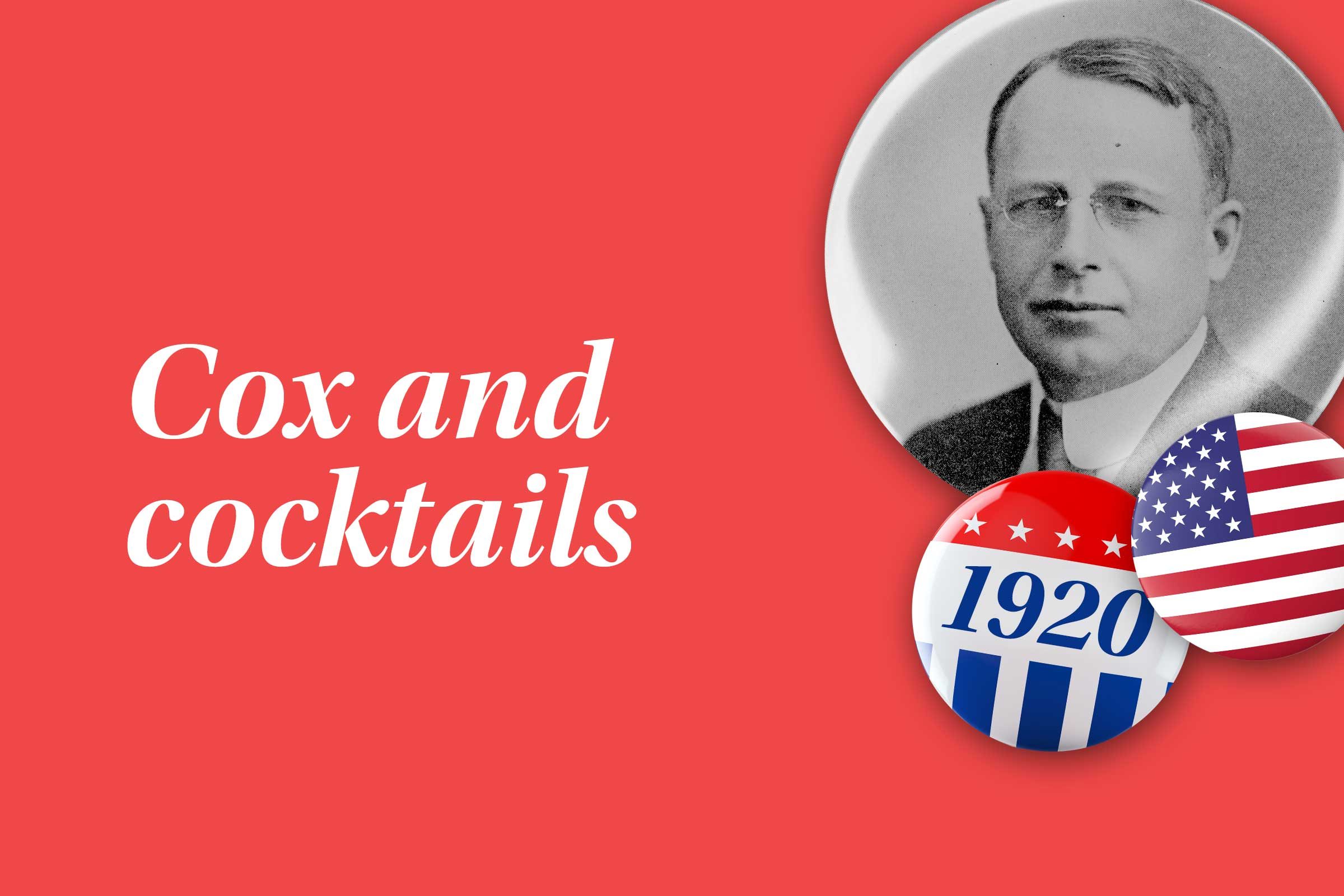 The presidential campaign of 1920 was a race between Republican Senator Warren G. Harding, a newspaper editor from Ohio, and Democratic Governor James Cox, another newspaper editor from Ohio. Cox opposed Prohibition. Harding did not. This slogan appears to be a tactic Harding’s campaign used to paint Cox as a cocktail-sipping, alcohol-tolerating guy. And whether it was this catchy line or Harding’s more widely known plea for a “return to normalcy,” it worked: Harding defeated Cox with 60 percent of the popular vote, and 71 percent of the electoral vote. But this wouldn’t be the last we heard from Cox’s running mate, Franklin Delano Roosevelt. And despite rumors, Harding’s wife did not poison him. Here are 15 other presidential mysteries that were never solved. 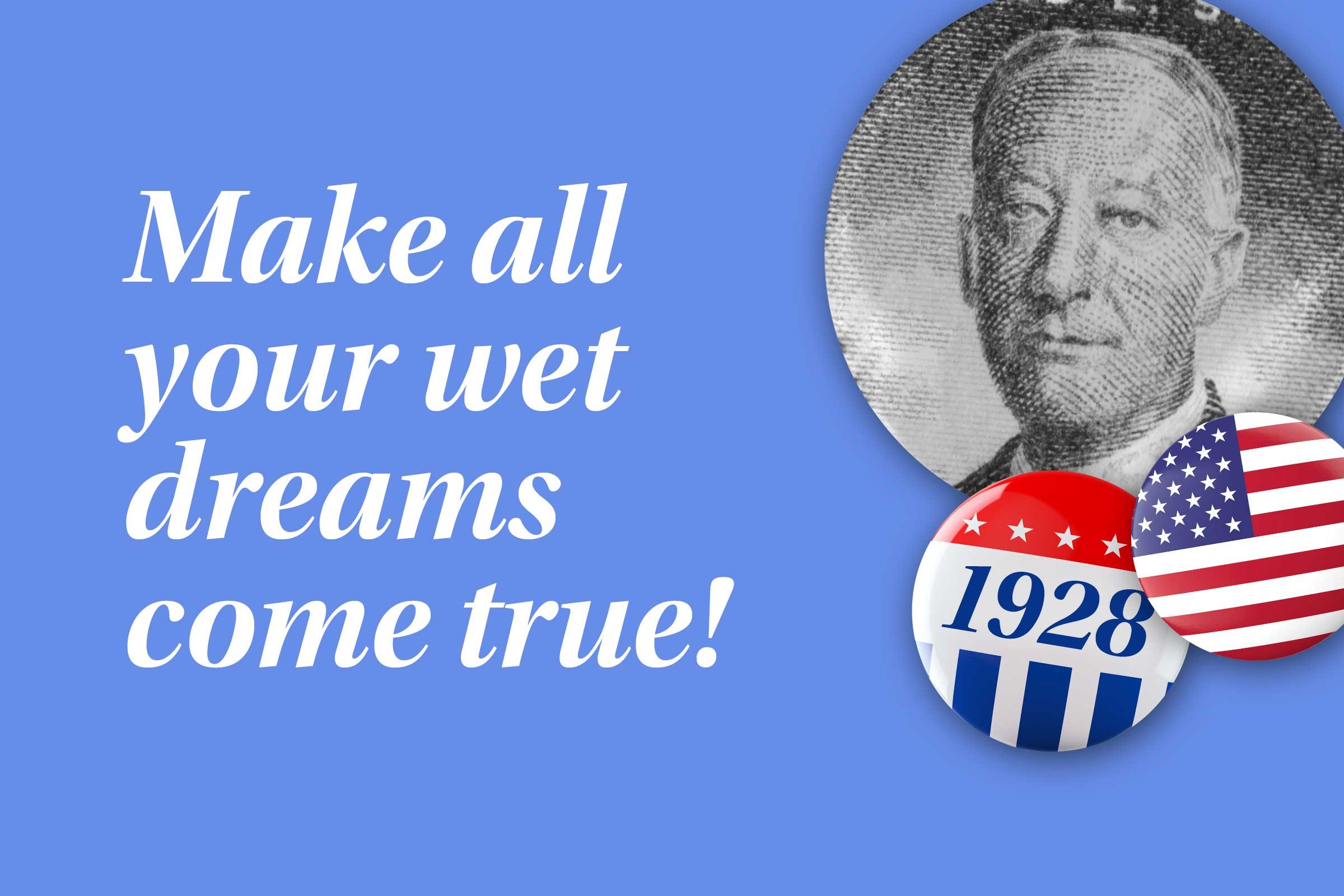 When New York Governor Alfred E. Smith ran for president as the Democratic nominee in 1928, he did so as a “Wet” candidate—meaning that he supported the repeal of Prohibition. Unfortunately for Smith, his working-class roots on the Lower East Side of New York City didn’t play well outside the five boroughs. Neither did his anti-Prohibition stance among the white, rural, Protestant South, and Midwest, which were overwhelmingly dry, Mental Floss reports. Even though Smith himself didn’t flaunt his Wet position, his supporters did, and came up with the slogan “Vote for Al Smith and Make Your Wet Dreams Come True.” Want to learn more about Prohibition? Here are 13 of the strangest liquor laws in America. 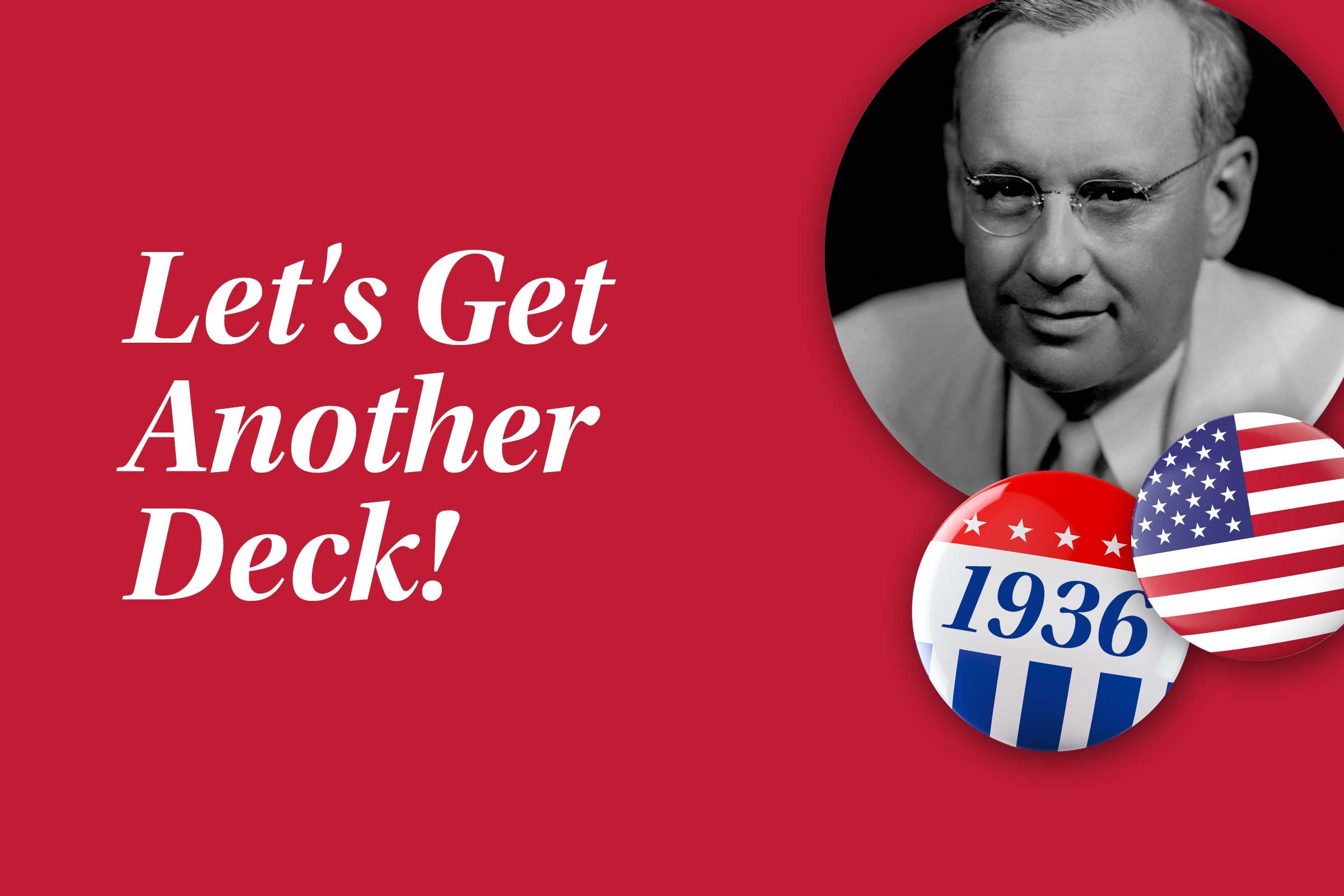 When Alfred Landon ran against Democratic incumbent president Franklin Delano Roosevelt in 1936, he had his work cut out for him. At this point, FDR had enacted several components of the New Deal—designed to get Americans back to work during the Great Depression—and his first bid for reelection was, in a way, a referendum on these new policies. Landon, meanwhile, was a liberal Republican who supported various parts of the New Deal and other Democratic initiatives. And though Landon did eventually criticize the New Deal and Roosevelt, it was more about the implementation of the programs, than the policies themselves. Nevertheless, his campaign slogan was “Let’s Get Another Deck”—a reference to the New Deal by way of a deck of cards. For a look at other angles on politics and finances, check out these 20 comically candid cartoons about money and politics. 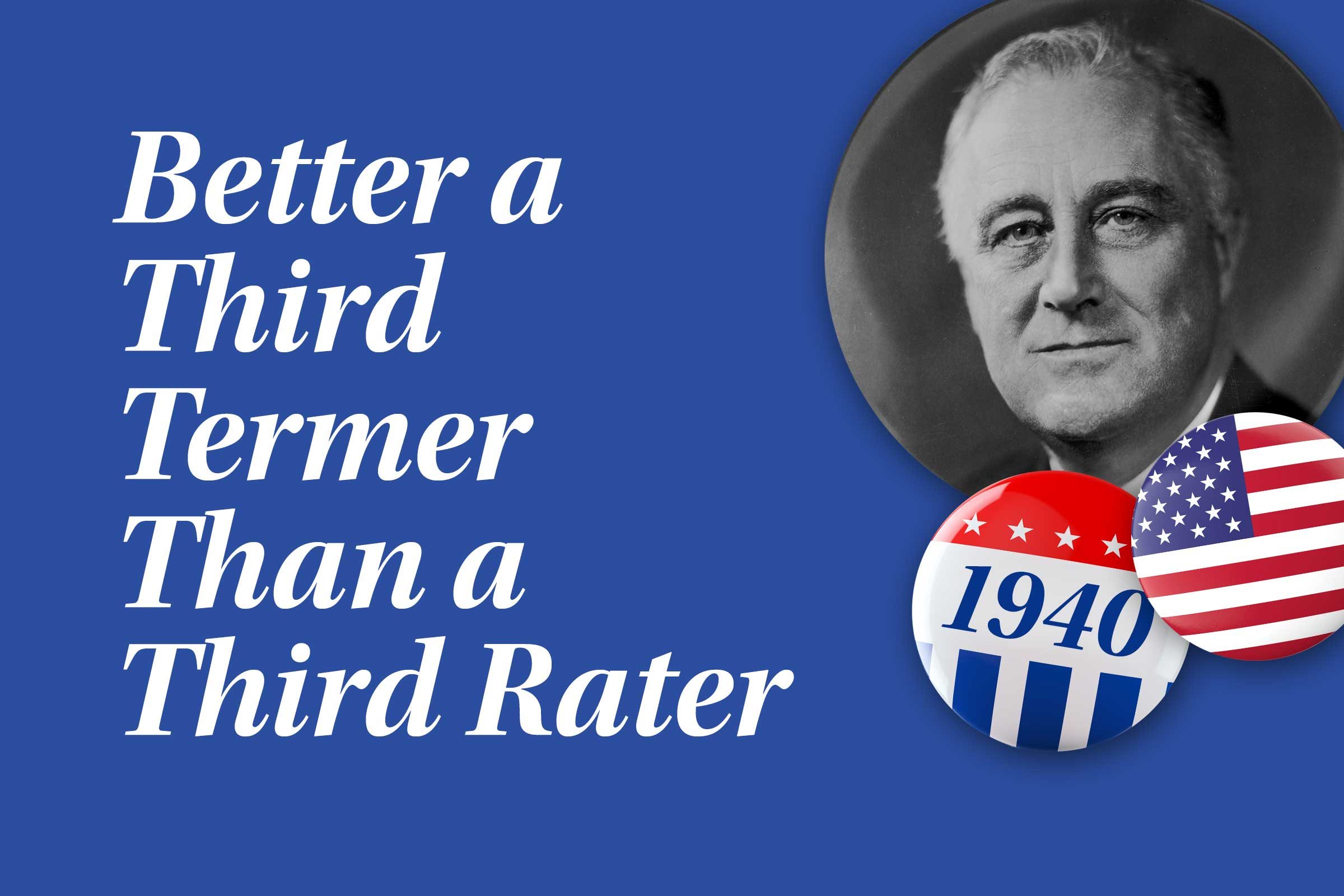 Given that Franklin Delano Roosevelt ran for president—and won—four times, he had his fair share of campaign slogans, but official (like “Happy Days Are Here Again”) and unofficial. One of the catchiest slogans to appear on a campaign button came during the 1940 election, and read: “Better a Third Termer Than a Third Rater.” But this wasn’t the work of a politically savvy wordsmith: it was actually a statement made by Senator Henry Ashurst, a Democrat from Arizona regarding his feelings on voting for the Republican candidate, Wendell Willkie, in the presidential election. Though Ashurst and FDR were from the same party, the senator previously backed a proposed constitutional amendment which would limit presidents to serving one six-year term. Even though being reelected in 1940 would put Roosevelt in his third term, Ashurst uttered the words that became a campaign slogan when faced with the political alternative. 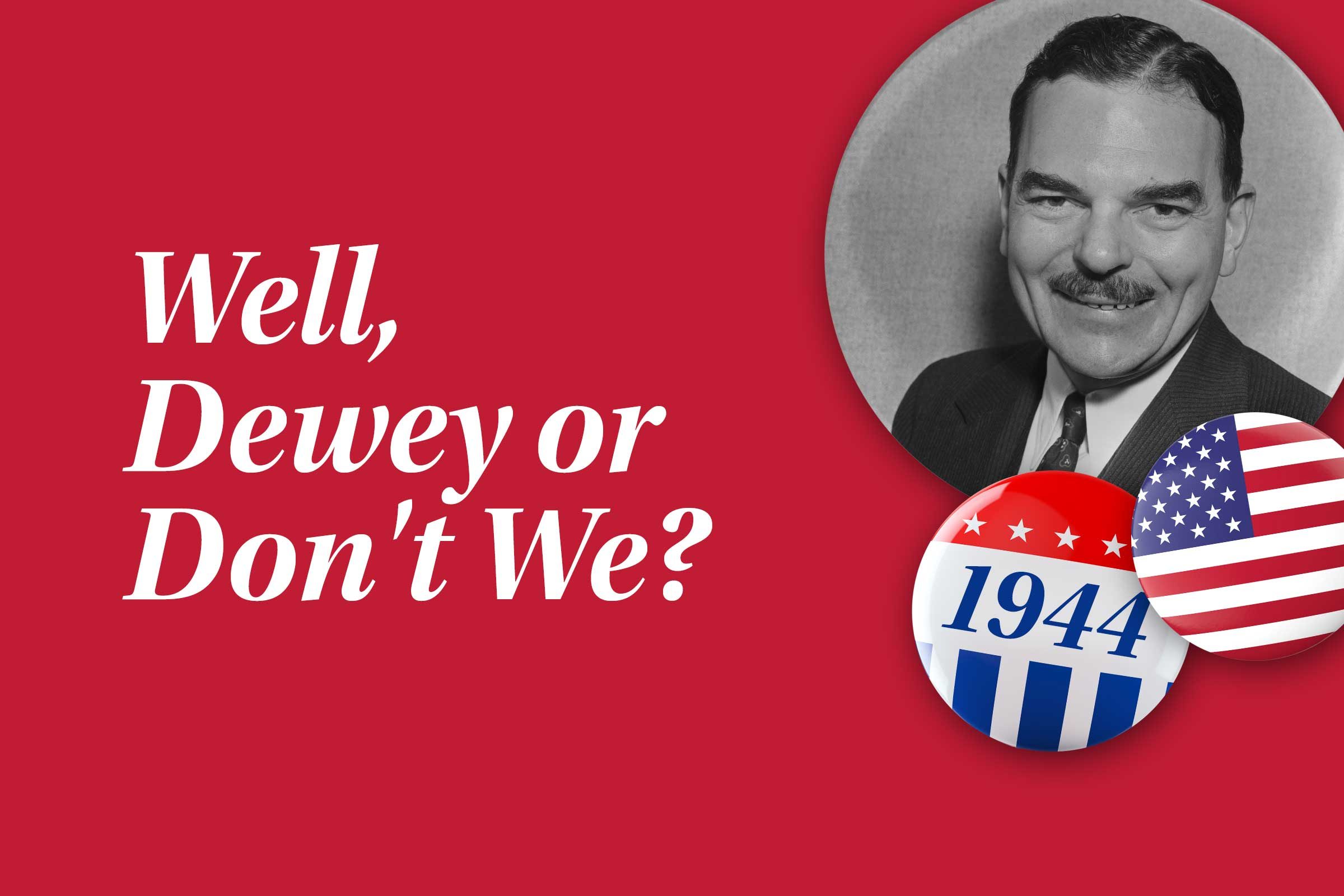 New York Governor Thomas Dewey is most closely associated with the iconic photo of Harry S. Truman on November 2, 1948, holding up a copy of the Chicago Tribune incorrectly announcing, “Dewey Defeats Truman.” But that wasn’t Dewey’s first defeat in a presidential election. That came in 1944, when he ran against Franklin Delano Roosevelt, in his third bid for reelection. FDR referred to his opponent as “the little man on the wedding cake,” while Dewey posed an existential question to the electorate in the form of his campaign slogan: “Well, Dewey or Don’t We?” Turns out, voters did not. Sure, you may have known about the 1948 cover of the Tribune, but what about these U.S. presidential trivia questions everyone gets wrong? 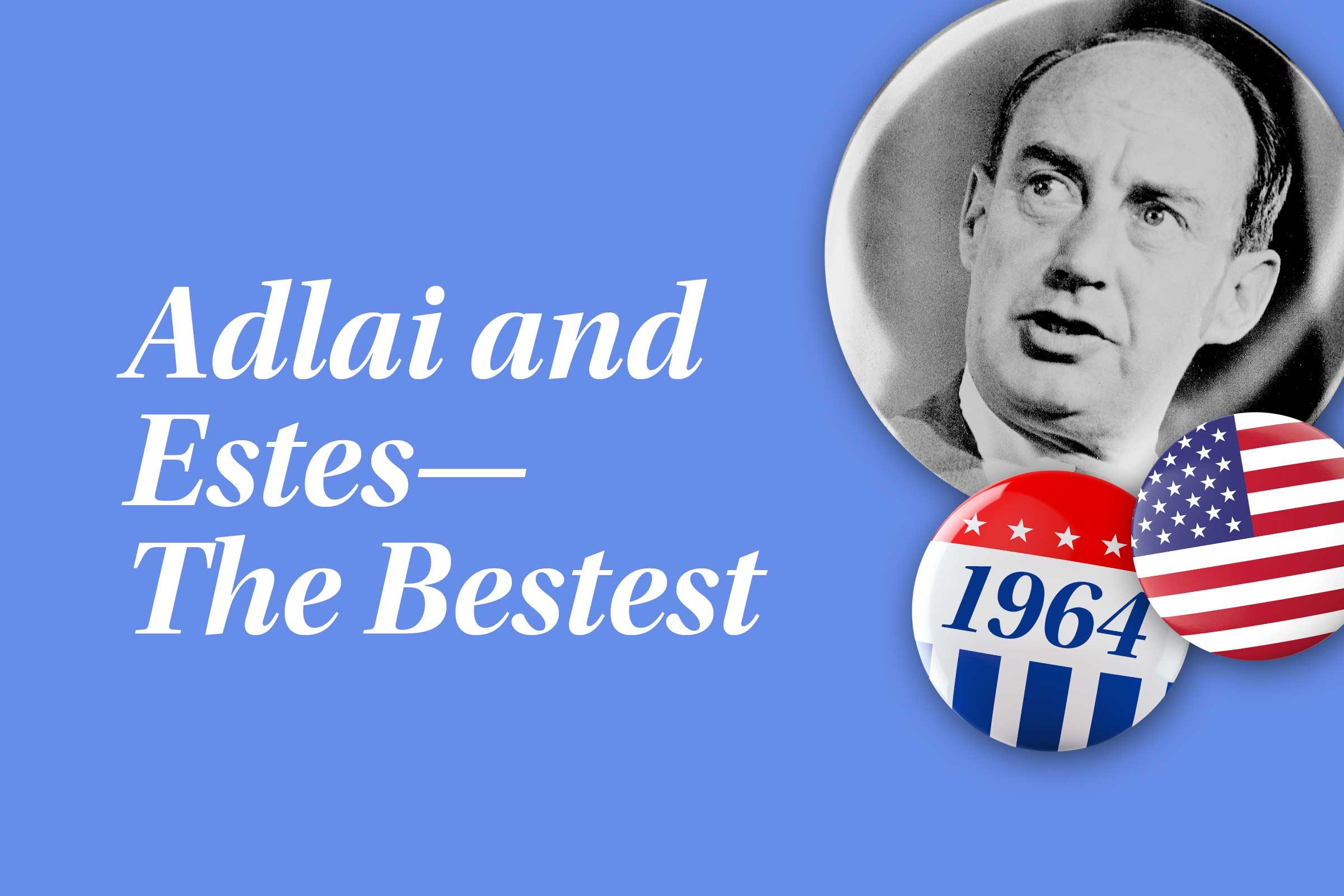 The presidential election of 1956 was a rematch between the candidates who ran against each other four years prior: Republican incumbent Dwight D. Eisenhower, and Democratic challenger Adlai Stevenson. In 1952, Eisenhower went with the simple, but effective slogan “I Like Ike,” while Stevenson opted for “All the Way with Adlai.” Both continued to use their previous slogans, but Stevenson added a few more to the mix, including “Adlai and Estes—The Bestest,” referring to his running mate Estes Kefauver. The voters in November 1956 did not agree with this statement, casting their ballots to show that they still liked Ike. Getting ready to cast your ballot this year? Here’s everything you need to get out and vote in 2020. 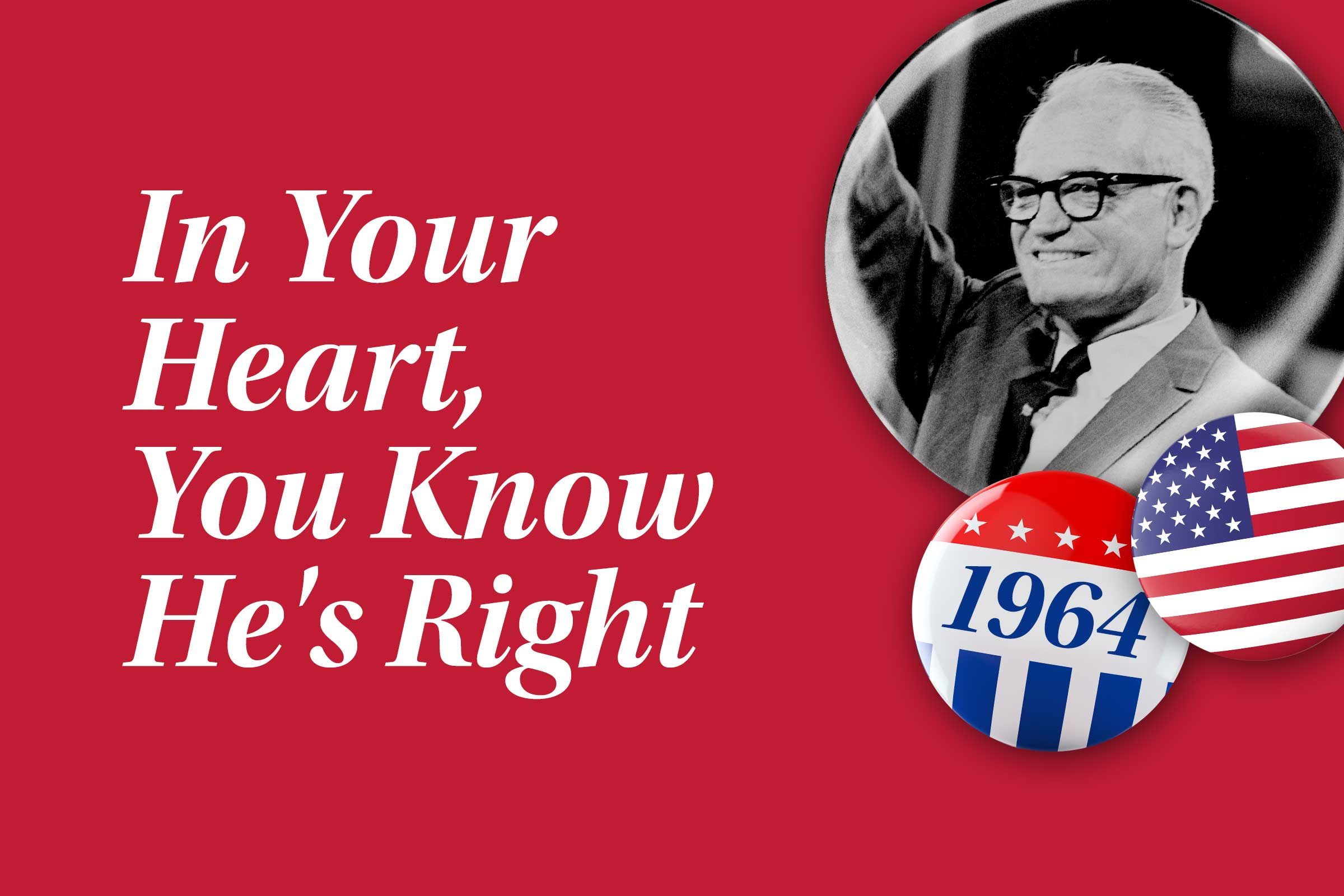 The year following John F. Kennedy’s assassination, his vice president and predecessor, Lyndon B. Johnson was up for election as the Democratic nominee for president. His Republican opponent was Arizona Senator Barry Goldwater, who was widely viewed as a right-wing extremist—including by some in his own party. Goldwater (or at least his campaign) was a big fan of gimmicky wordplay and merchandise, including buttons that read “Au H20” (Au = gold; H20 = water), and his slogan, “In Your Heart, You Know He’s Right.” And according to Margaret Kaplan, an editorial assistant at Apollo Publishers who worked on Words to Win By, a book on campaign slogans, Goldwater had five other slogans he was trying out. “This one tested the worst out of all of them, but he was so committed to it,” she told The History Channel. 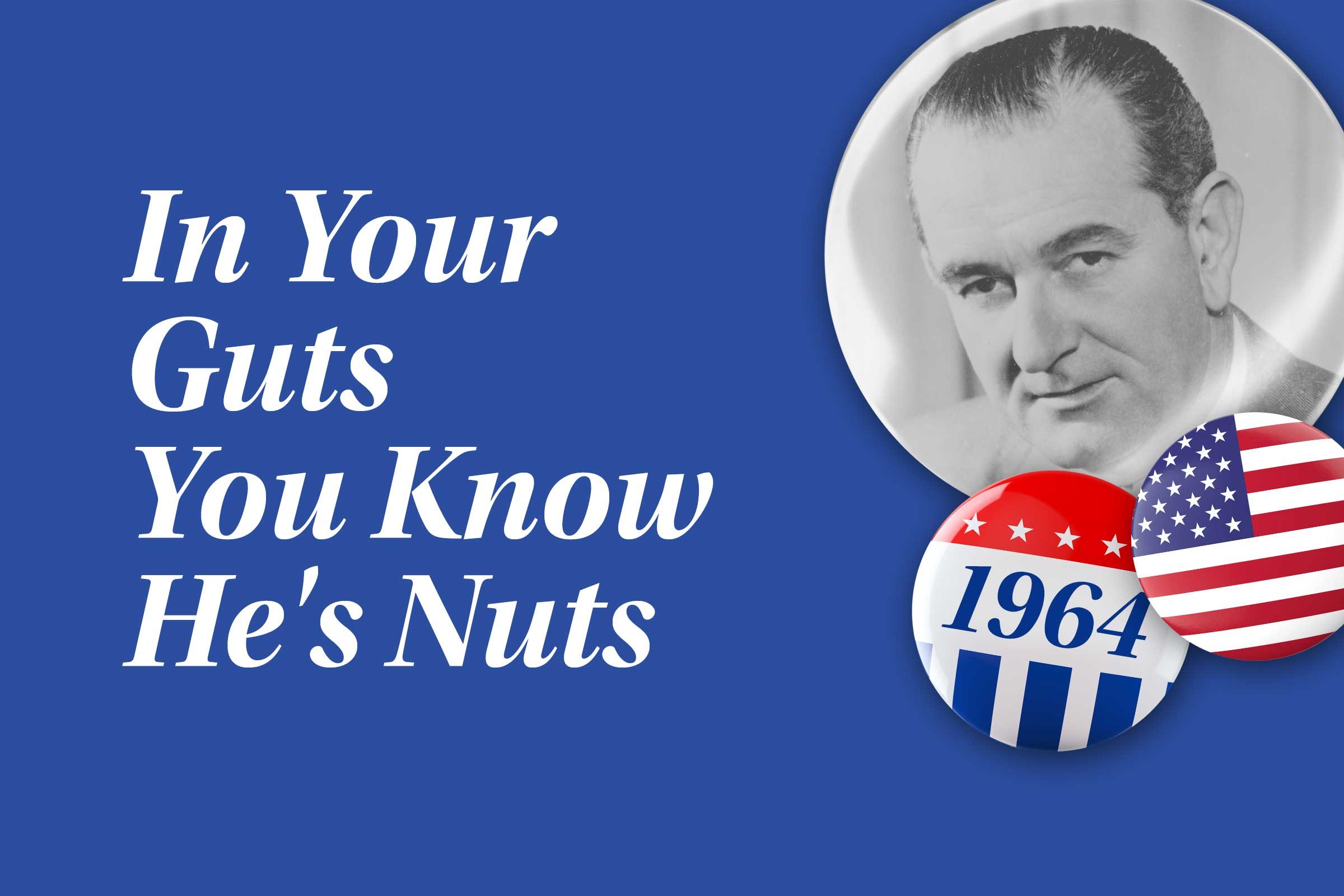 Not to be outdone, Lyndon B. Johnson’s campaign responded to Barry Goldwater’s slogan with their own twist: “In Your Guts You Know He’s Nuts.” In line with his opposition to the Civil Rights Act, the 1964 Republican National Convention appealed to the party’s racist base. “In responses to charges of extremism, Goldwater channeled the great Roman orator Cicero in his acceptance speech: ‘Extremism in the defense of liberty is no vice. Moderation in the pursuit of justice is virtue,'” Simon Topping, PhD., associate professor of United States history at the University of Plymouth wrote in 2016. Johnson won by a landslide. 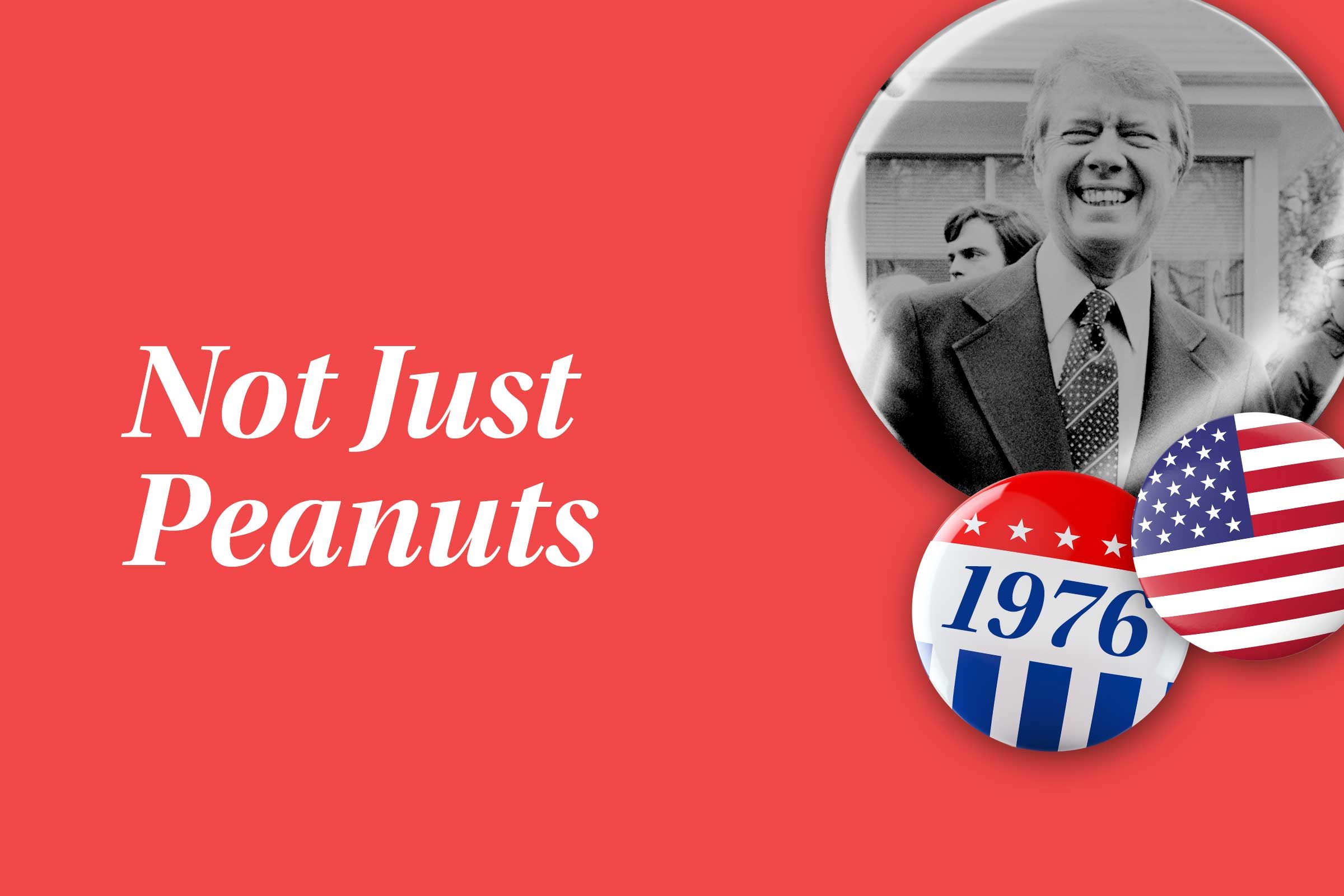 Chances are if people know one thing about Jimmy Carter (other than the fact that he was a one-term U.S. president) it’s that he was a peanut farmer from Georgia. A trait once used to help him appeal to the masses, Carter and his campaign soon grew tired of the peanut shtick, and adopted a new slogan: “Not Just Peanuts,” to demonstrate to voters that his background and experience extended beyond legumes. Though it worked in 1976, Carter lost his bid for reelection against actor-turned-politician Ronald Reagan by a significant margin. But Carter has kept busy since leaving office, including working with Habitat for Humanity. Learn about his favorite build.